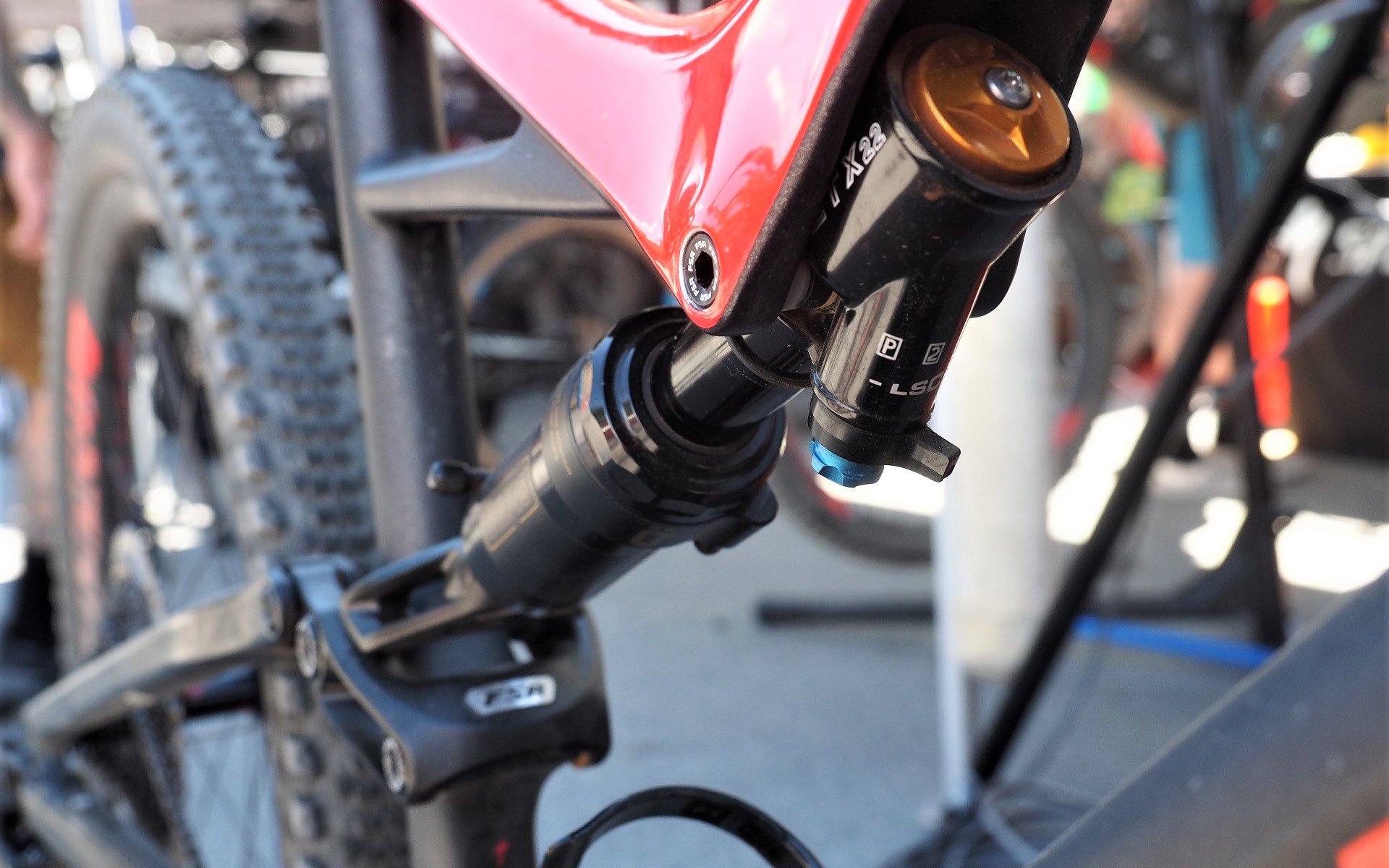 Sweating The Small Things at Crankworx 2017 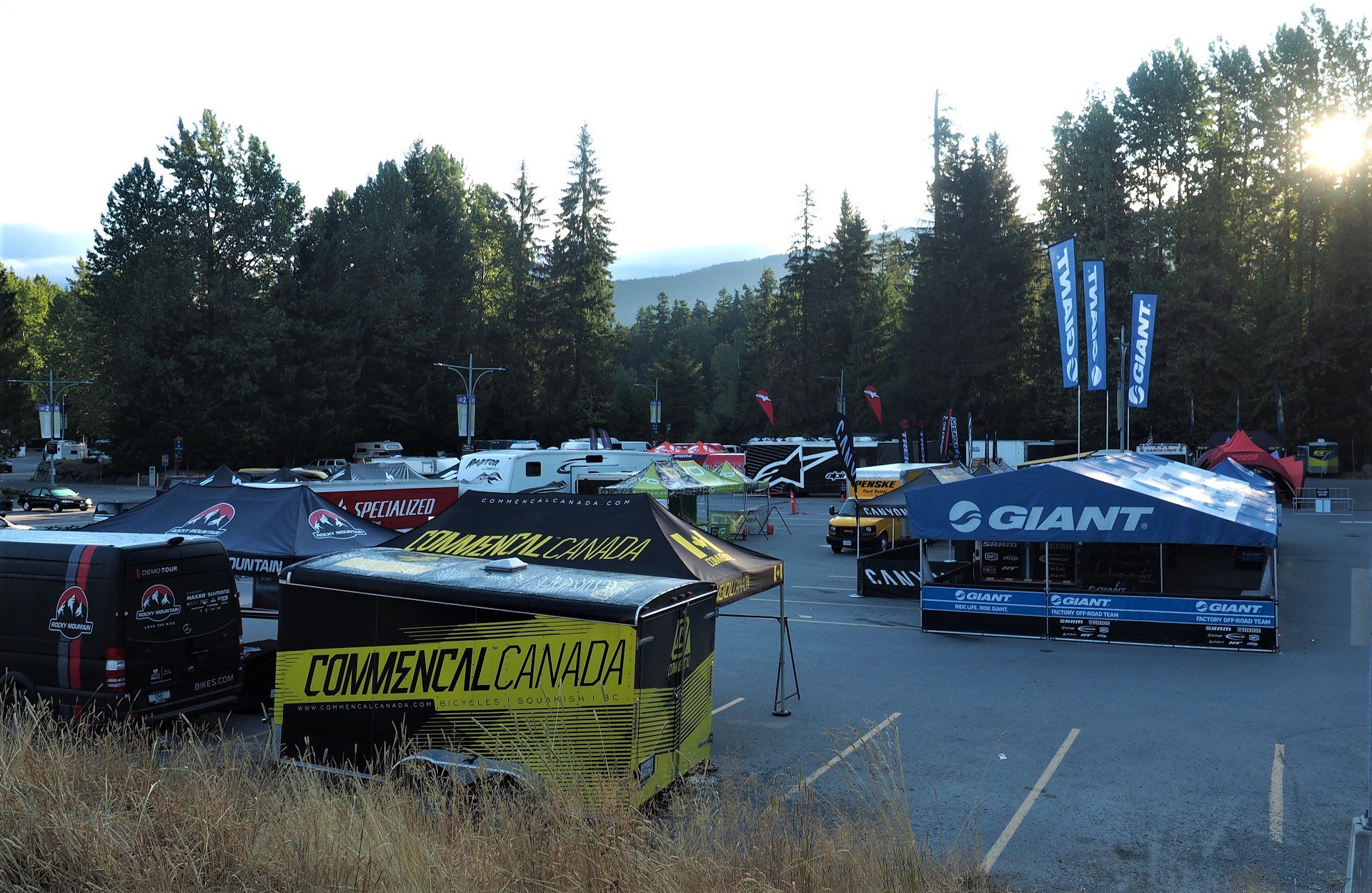 It's just after 7am on Saturday, August 19th, 2017. For the second year in a row the pits are silent except for GT Bicycles where there are already bustling bodies getting ready for another big day wrenching in WhisGNAR.

For the second year in a row, I hit Crankworx for a single marathon day to nerd out on as many little differentiating details as I could come across. As with my 2016 article, my entire day’s obsession was the small things. Unique details in a sea of similar products and services that upon closer examination make them worthy of consideration. 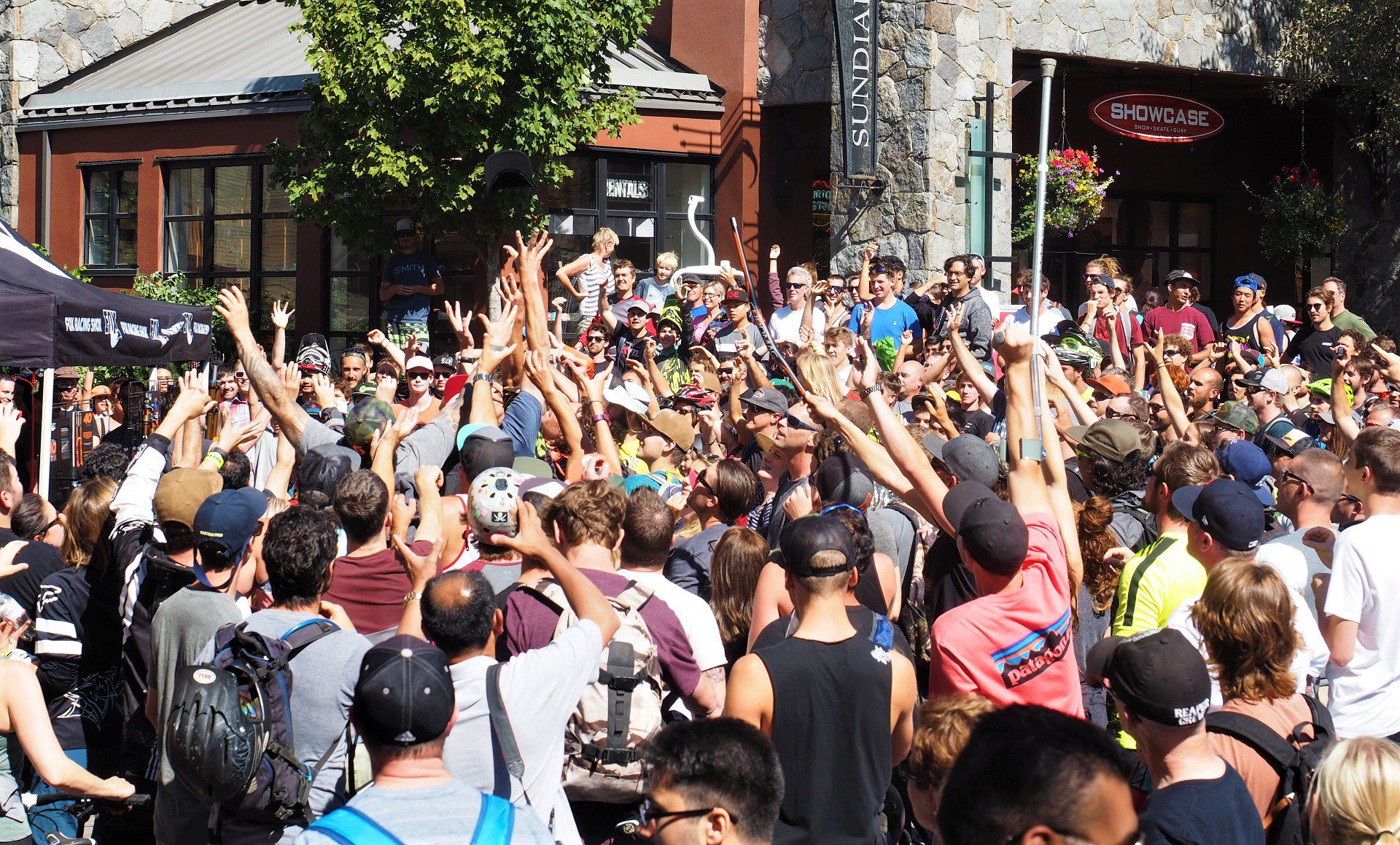 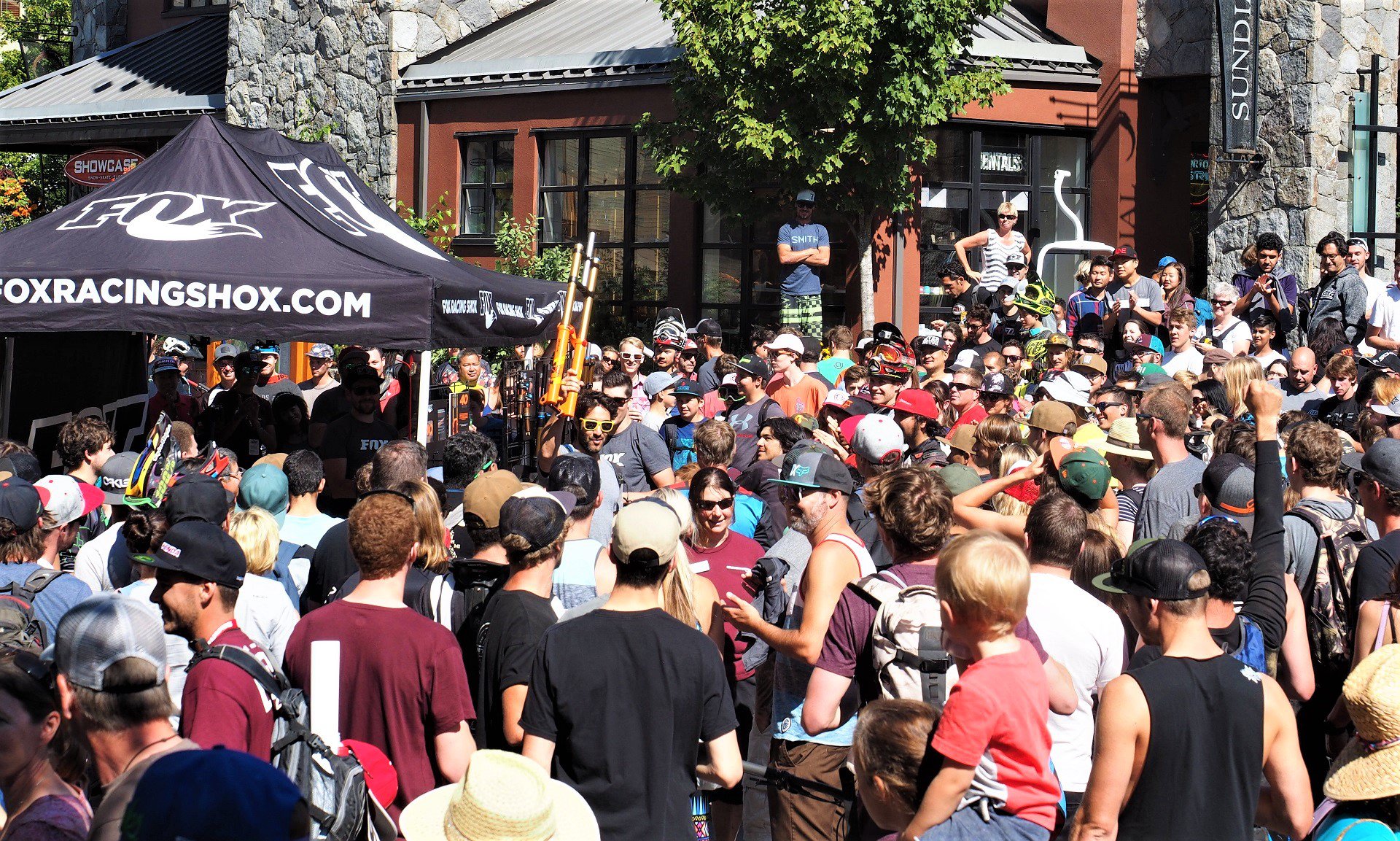 Jared Walker from Fox Racing Shox had the privilege - not to mention the high risk of personal bodily harm - of giving away an orange Factory Fox 40. The crowd was surprisingly muted when the winner (shown) claimed his prize. Jealousy is a nasty rut full of braking bumps folks.

Some products don't need to be sought out. They grab you by the free Crankworx T-Shirt and club you over the head with their crazy long and deadly looking traction pins. Other details require a bit more treasure hunting. 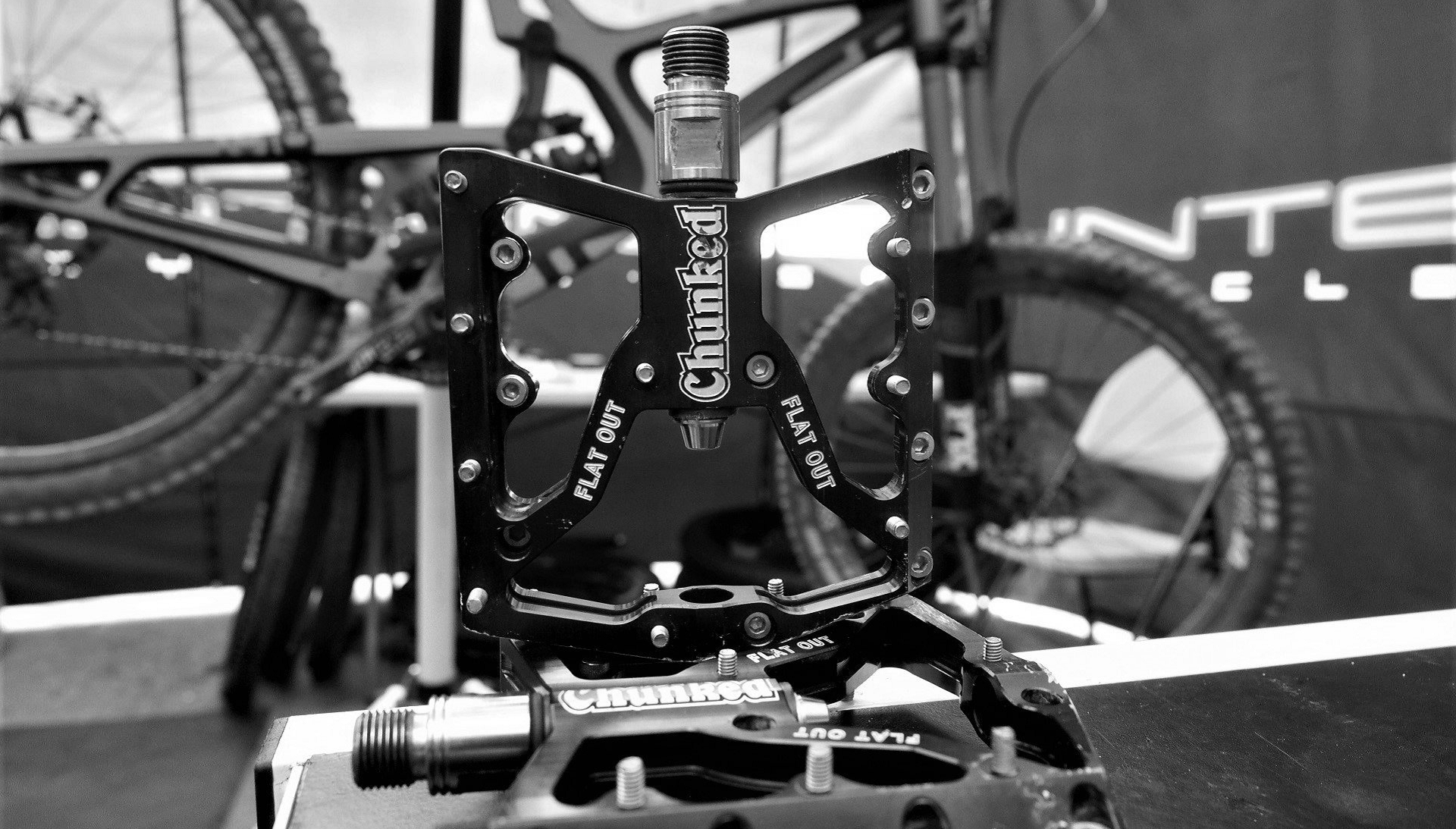 Direct from the dread island of deadly beasties, these Chunked pedals in the Intense pits are the meanest I've ever seen. Those pins?! 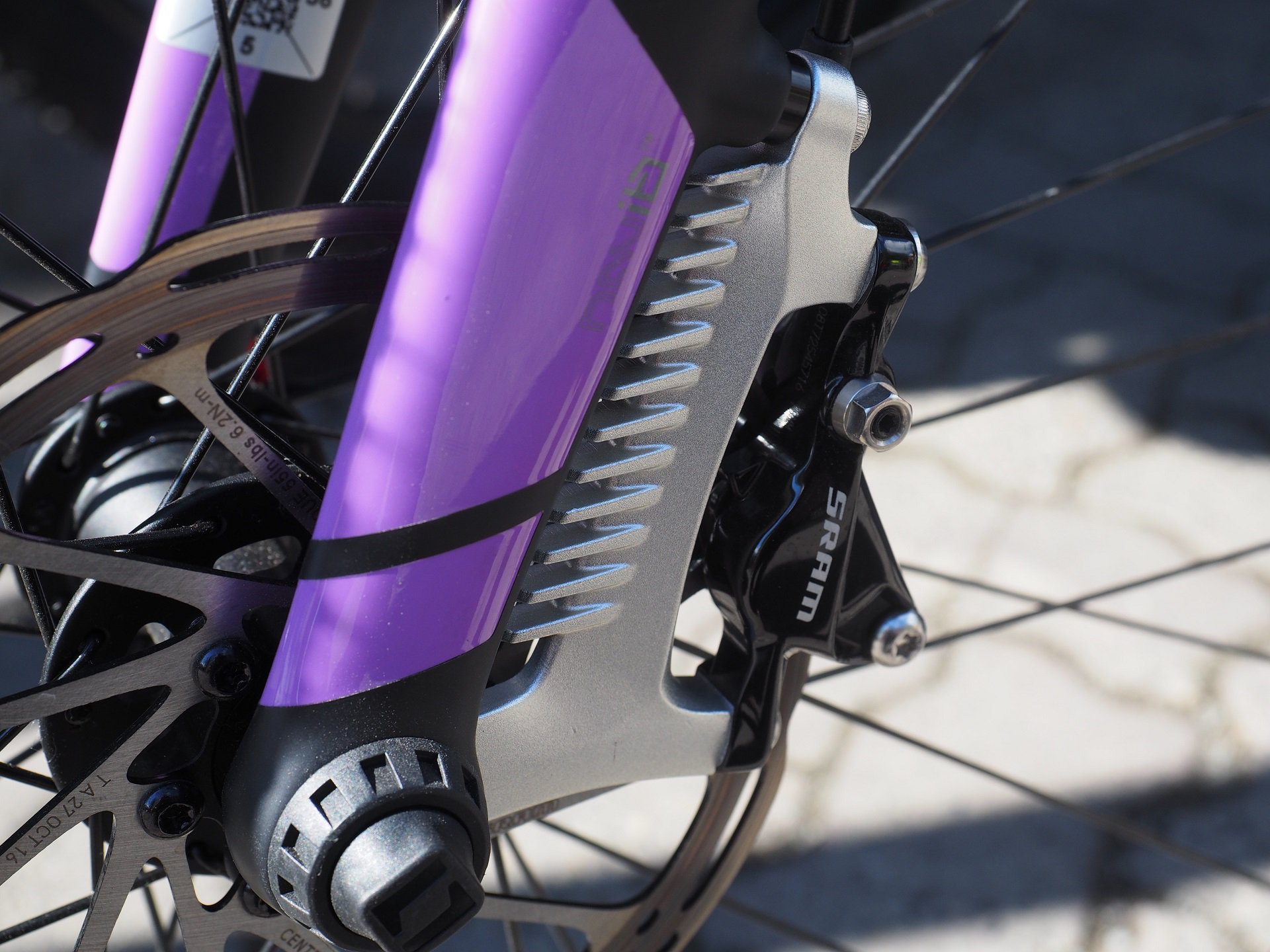 As a design house Naild makes some crazy stuff - like the new Wolf Ridge - and this brake adapter in Marin's booth was no exception. Big rotors or, in this case, small - the massive surface area helps to dissipate heat.

The most impressive detail? Bearings... 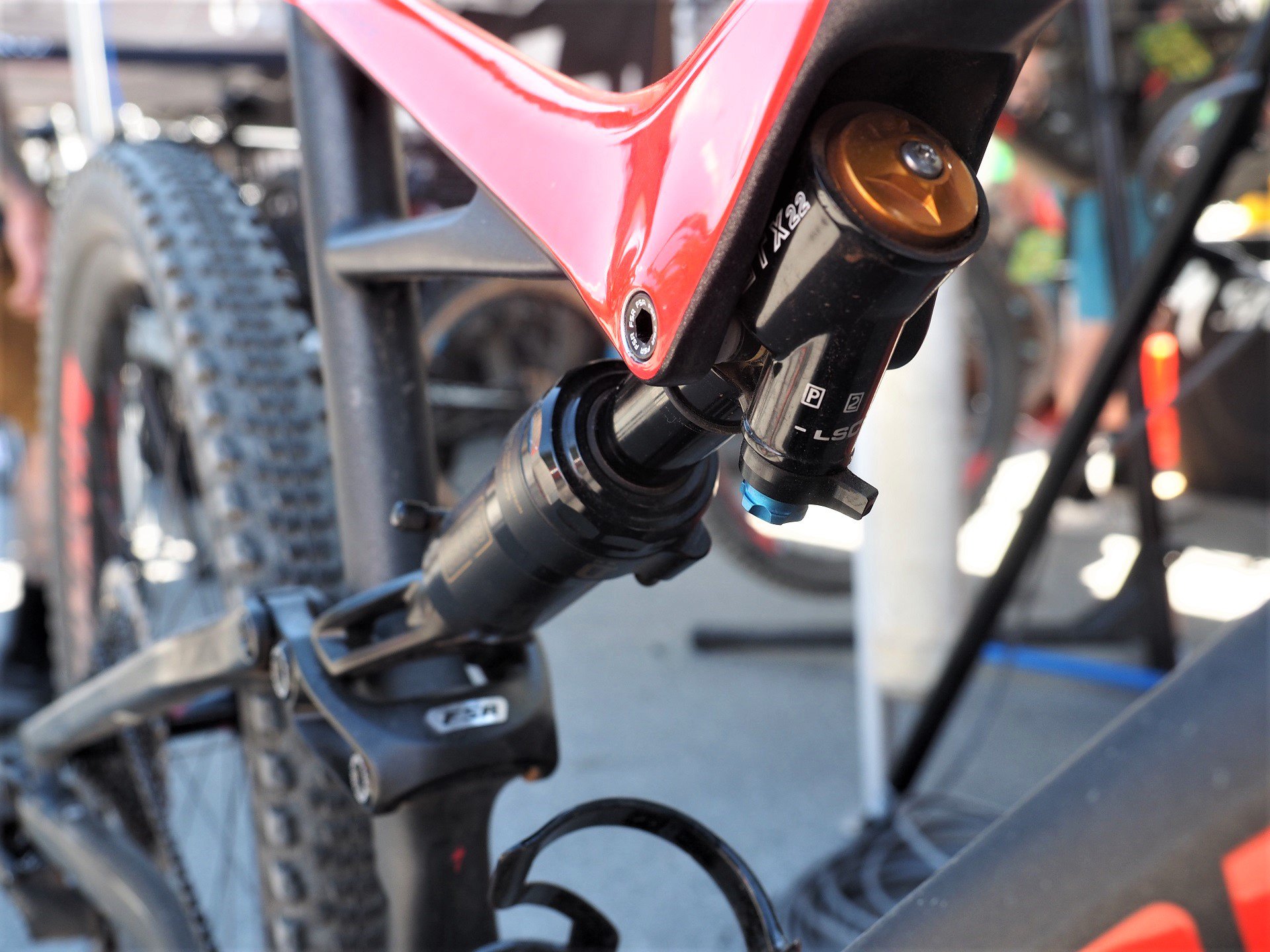 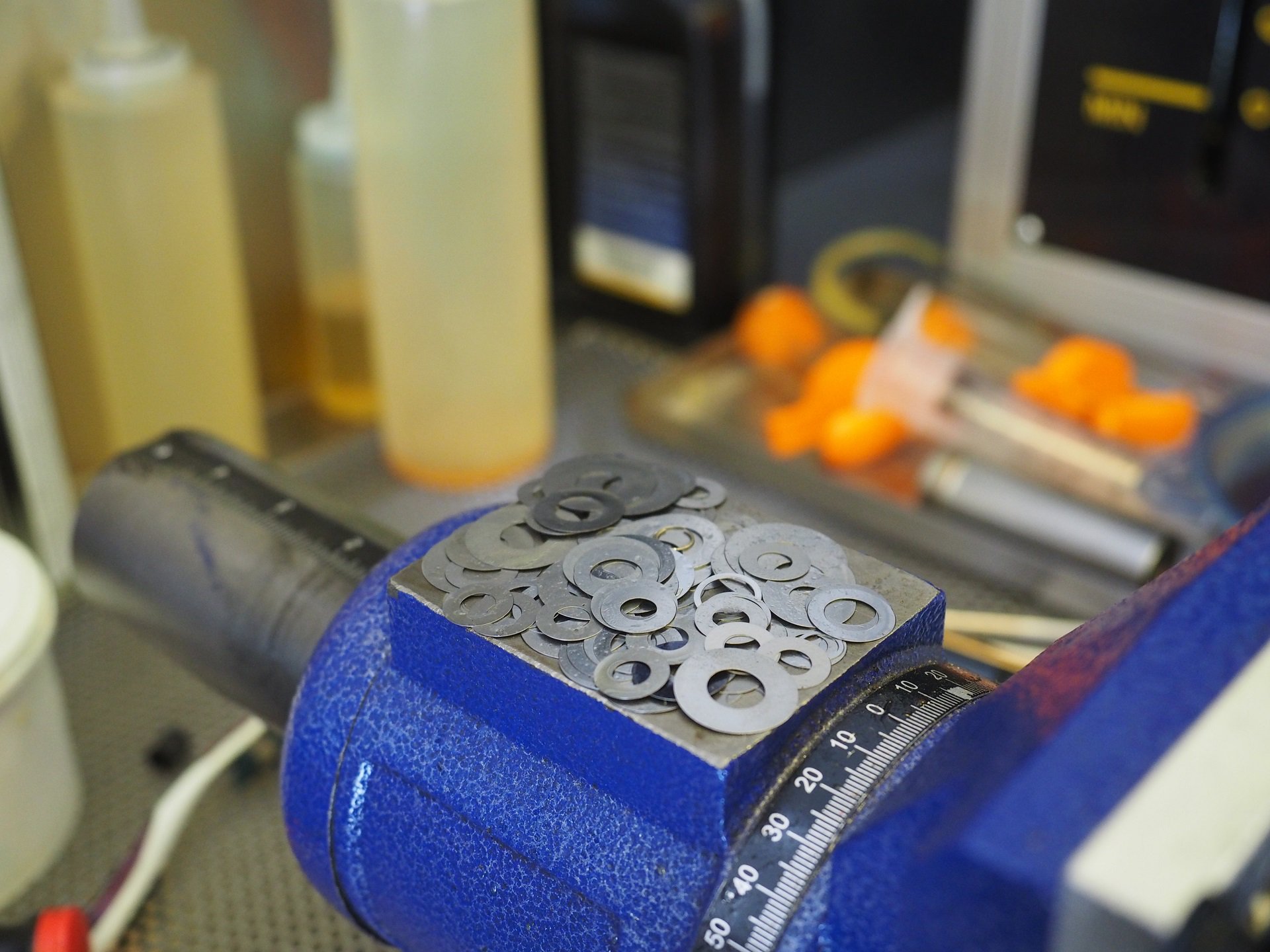 My annual SuspensionWerx giant pile of shims photo. There are almost entirely out of Fox FIT4 dampers that have been revalved for firmer low speed compression.

Any company that hasn't figured out cable routing around the BB area by now doesn't deserve to sell bikes. That goes for both predominantly external and internal routing setups. Too cruel?

For the few brands that haven't figured it out it is really not hard to find a good example to copy. For the bike designers out there still struggling here are some helpful ideas: 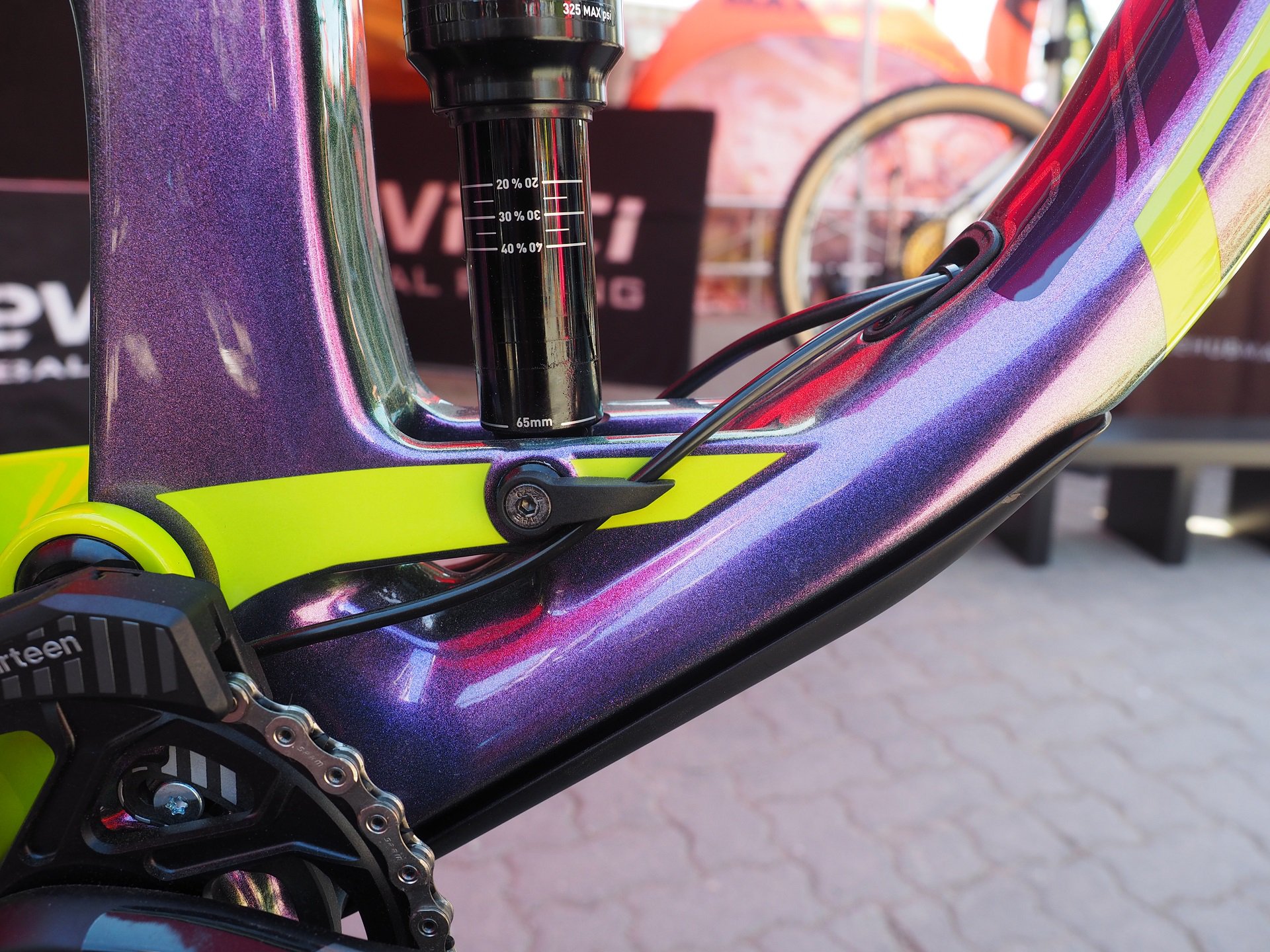 The purple meets tennis ball yellow of the Devinci Spartan leaps out from any crowd of bikes. A closer inspection yields some very clean cable guides. 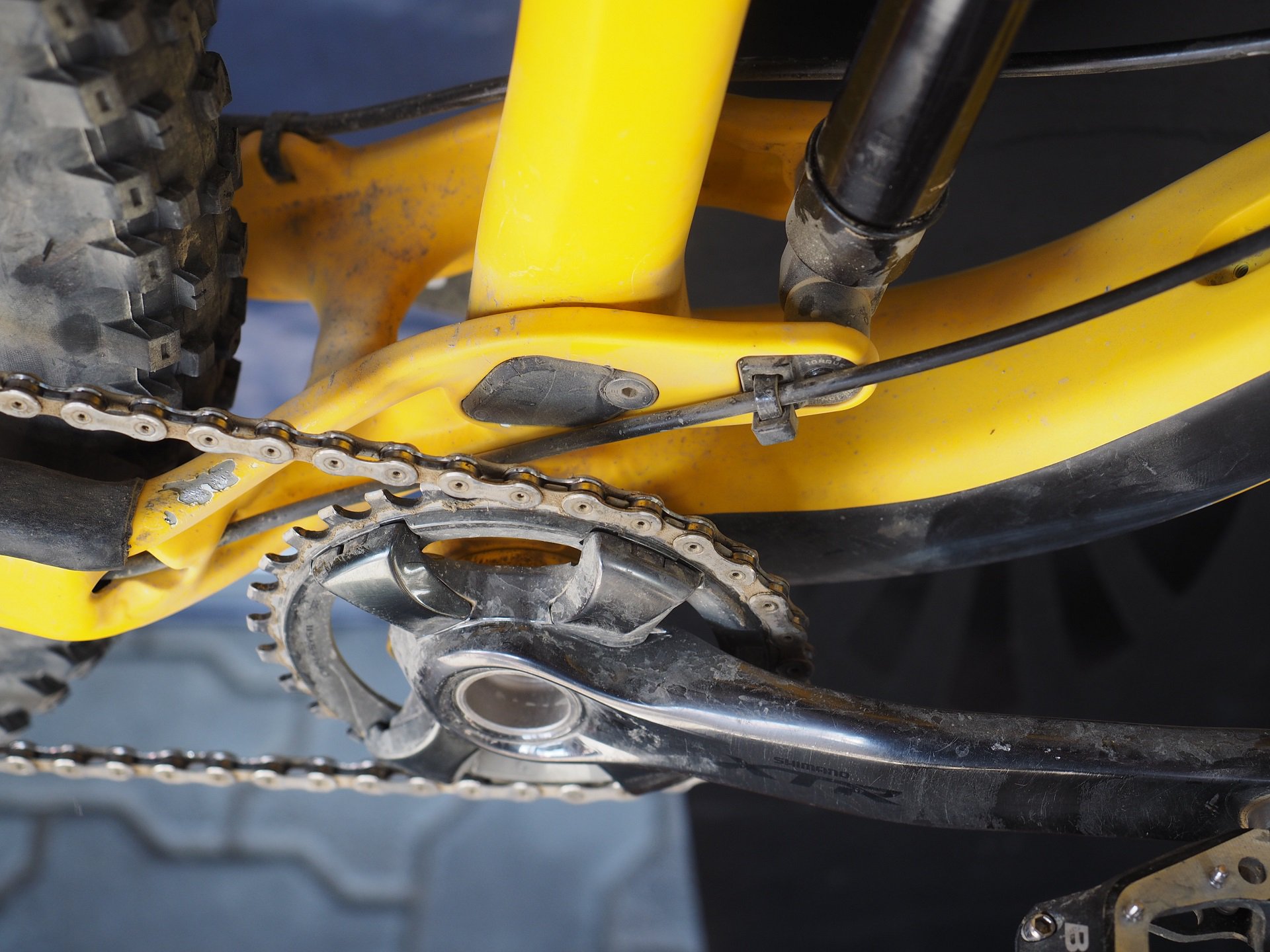 Simple and clean cable routing integrated into the shock mounting hardware on Trek's Ticket. This bike has been well and truly abused but there is no cable wear. 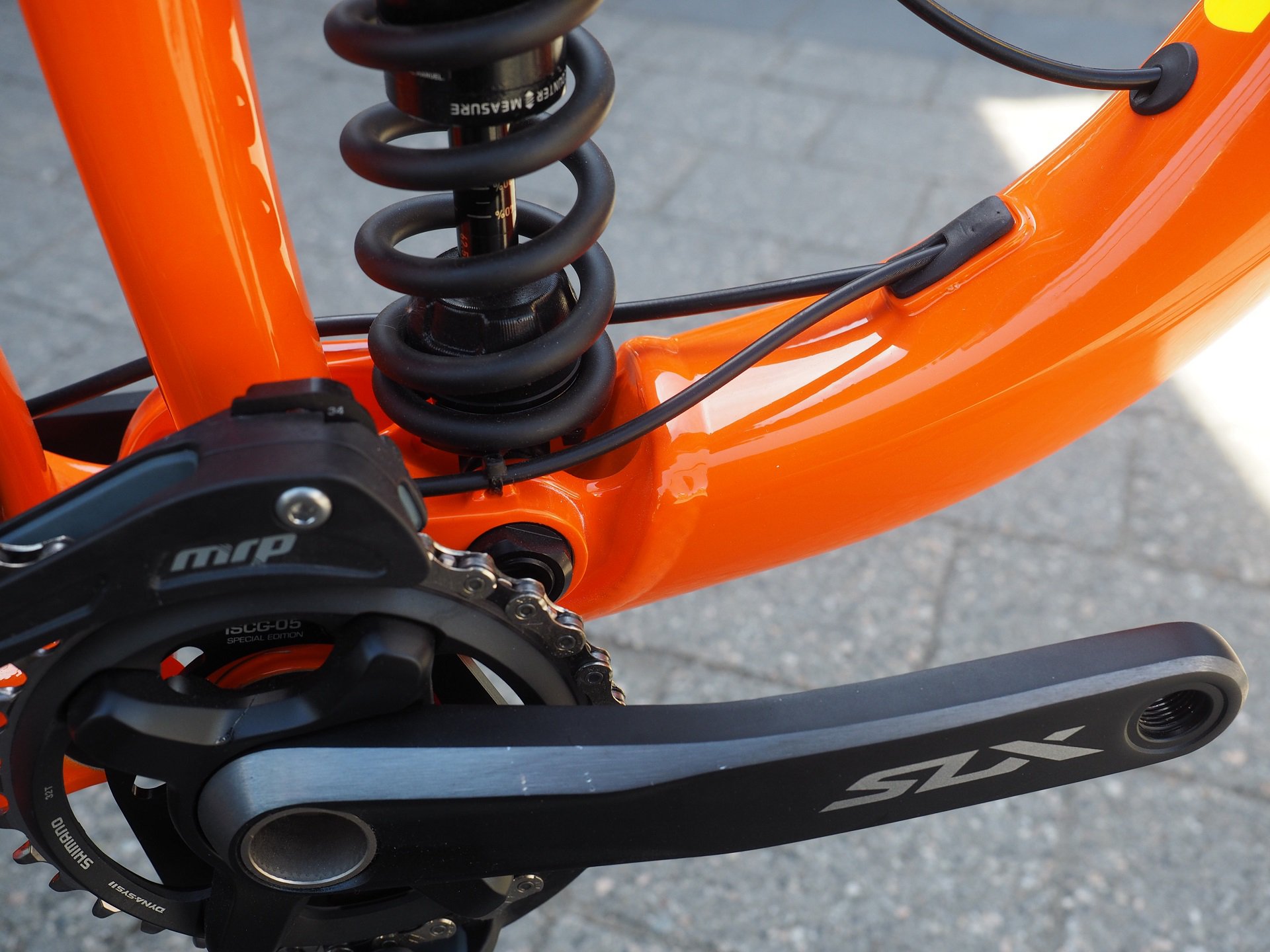 Giant uses some iteration of this cable routing on all their full suspension bikes. Proof that dual link bikes don't have to have sh*t cable routing. It's a choice.

I feel like the 2016 and 2017 model years were huge for new suspension announcements and it's pretty much carry over for 2018.

Exceptions? Ohlins has a new coil sprung version of their 36mm fork available and DVO is due to follow ahead shortly and coil shocks are making a comeback pedal-able even from conservative companies like Giant. 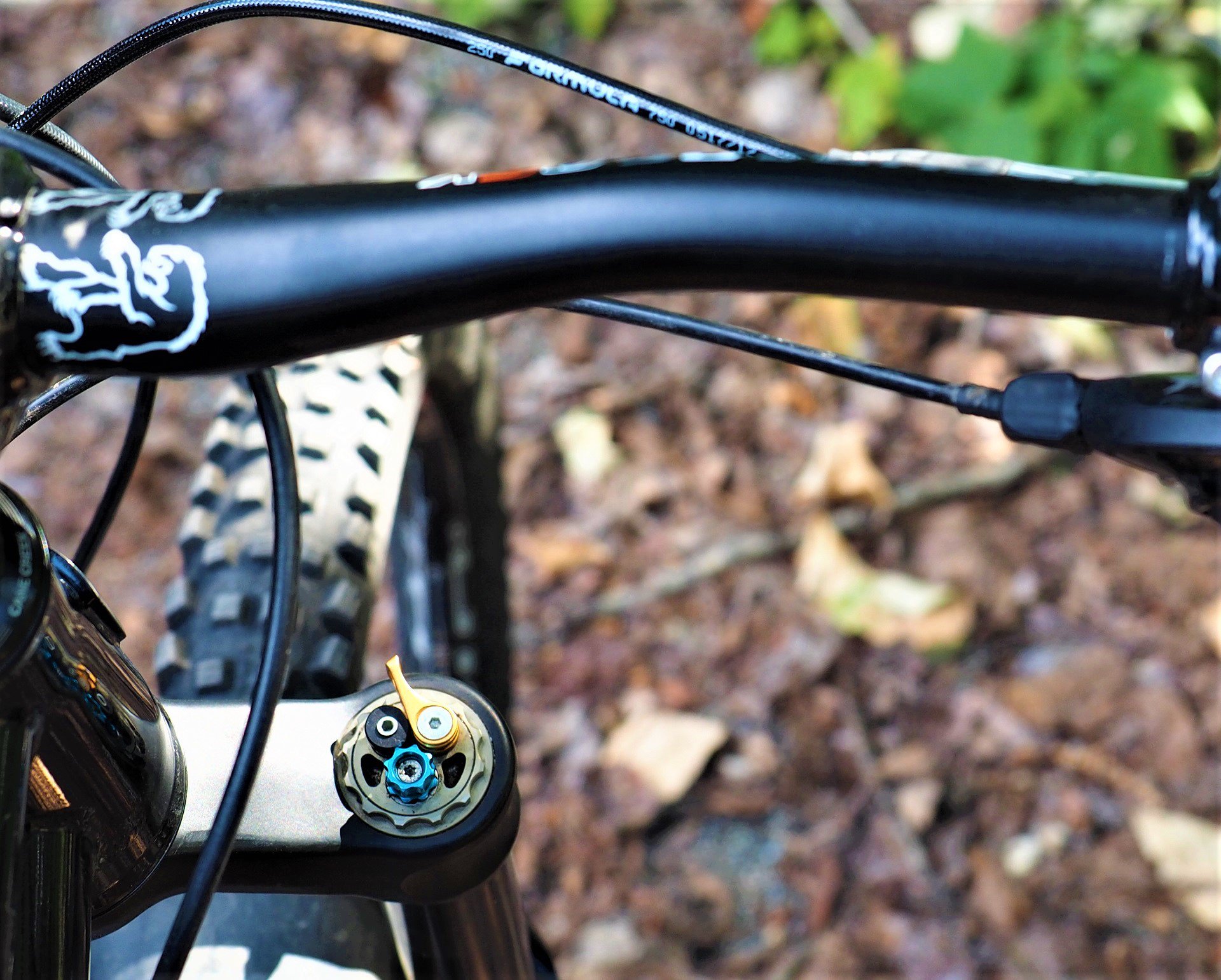 The mountain bike world is awash with hype about Formula's pending DH fork release but here in Whistler the big news was proper service, sales and tech support for the Canadian market. That's all coming courtesy Alba Distribution based in Whistler. Being able to buy brake pads and other parts in Canada is a big detail when choosing brakes and suspension.

Big trends in racing often find their way to the shop floor and for 2018 remote lockouts for shocks are a prime example. Cane Creek with their coil CCDB with Climb Switch and RockShox with the coil version of their Super Deluxe Coil are examples of the more aggressive options. 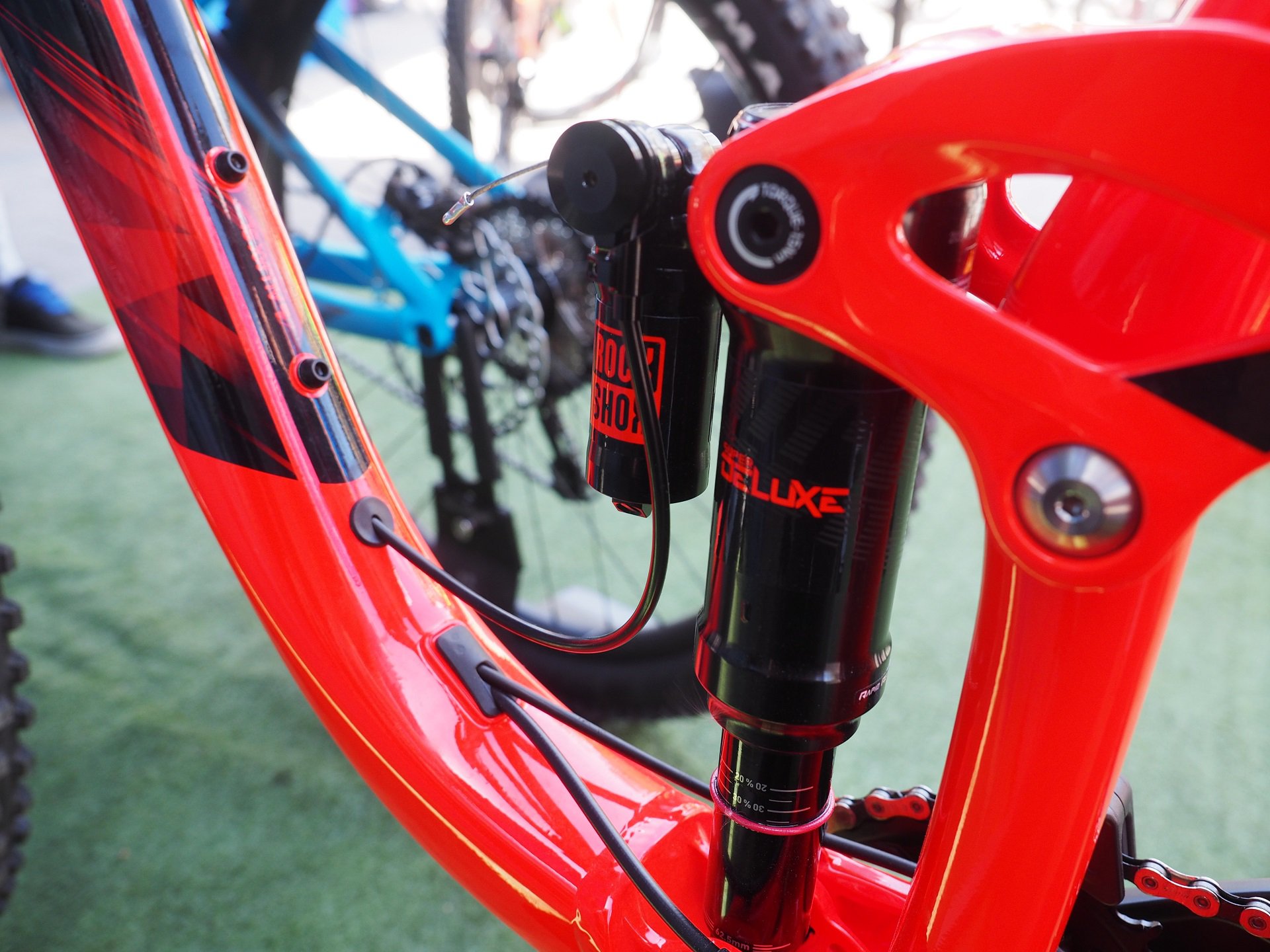 Whether air or coil sprung, the entire Giant Reign lineup is equipped with remote lockouts for their rear suspension. The irony is that by all accounts the 2018 Reigns are hugely improved in the pedaling department over the previous year. 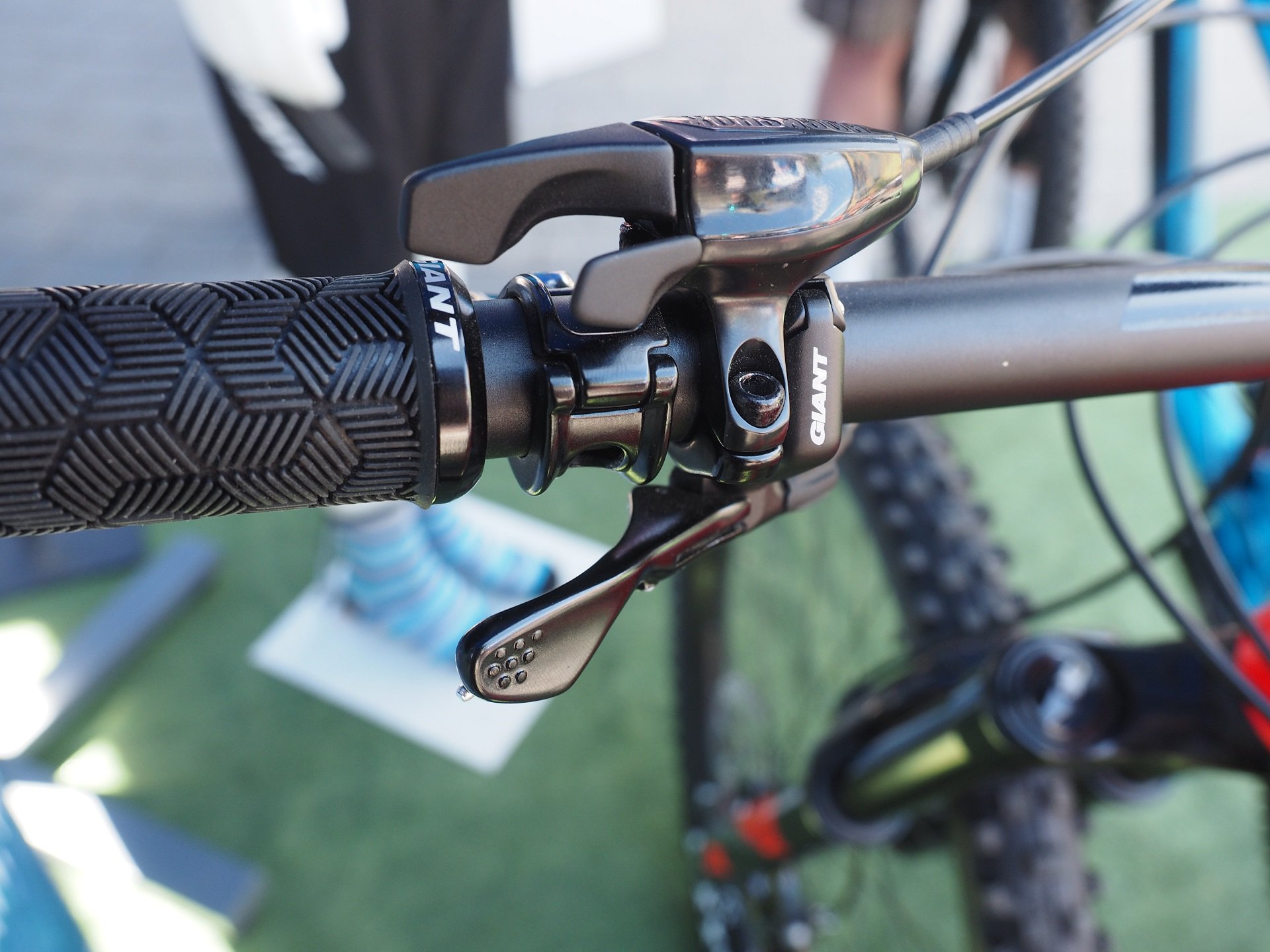 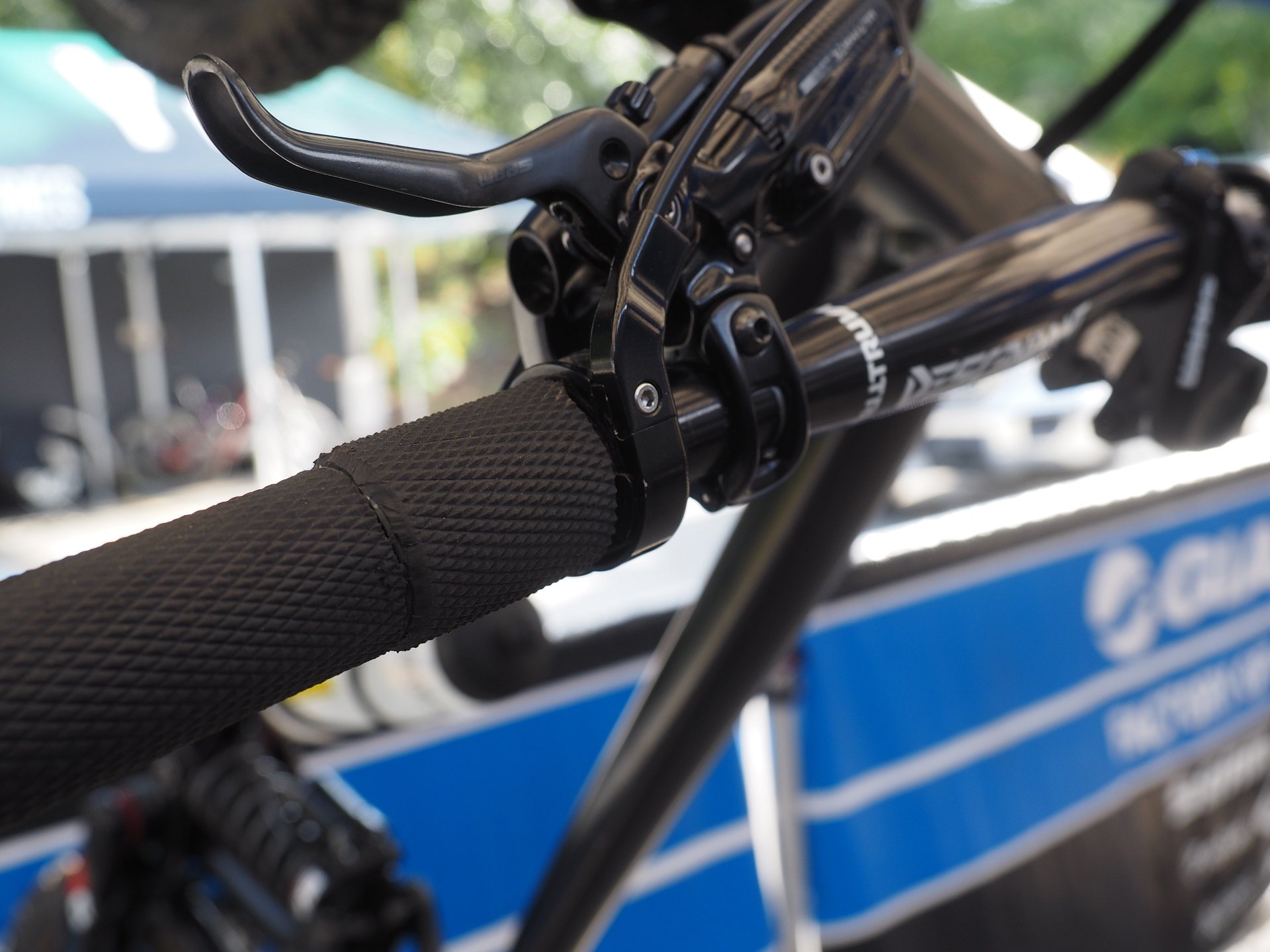 The best fitting helmet I've put on previously is my Giro Montaro. Sure it takes about 3-days for the pads to dry out after an epic and sweaty ride on a hot day but aside from that it fits my head like a glove.

Trek isn't the first company to incorporate a BOA adjust into their helmets but when I put on the new Bontrager Rally lid and tightened that beautiful BOA my head was instantly home. I've only worn it to stand about so I can't comment on performance beyond saying that no lid has ever so fit my head like it was made for me. 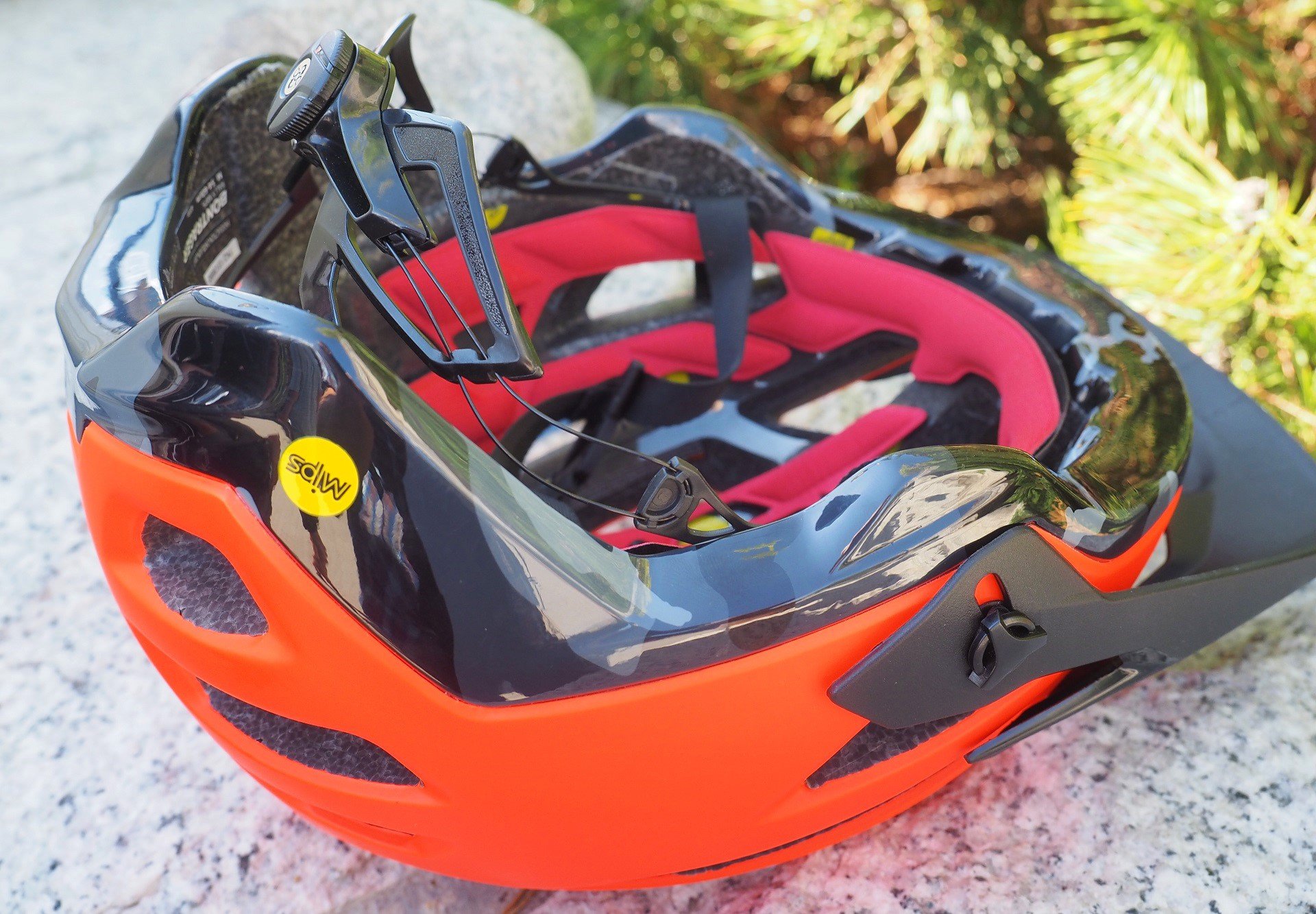 Sam Foos from Bontrager was truly excited to talk about how involved BOA is in the design process when their products are going to be mating with your products. 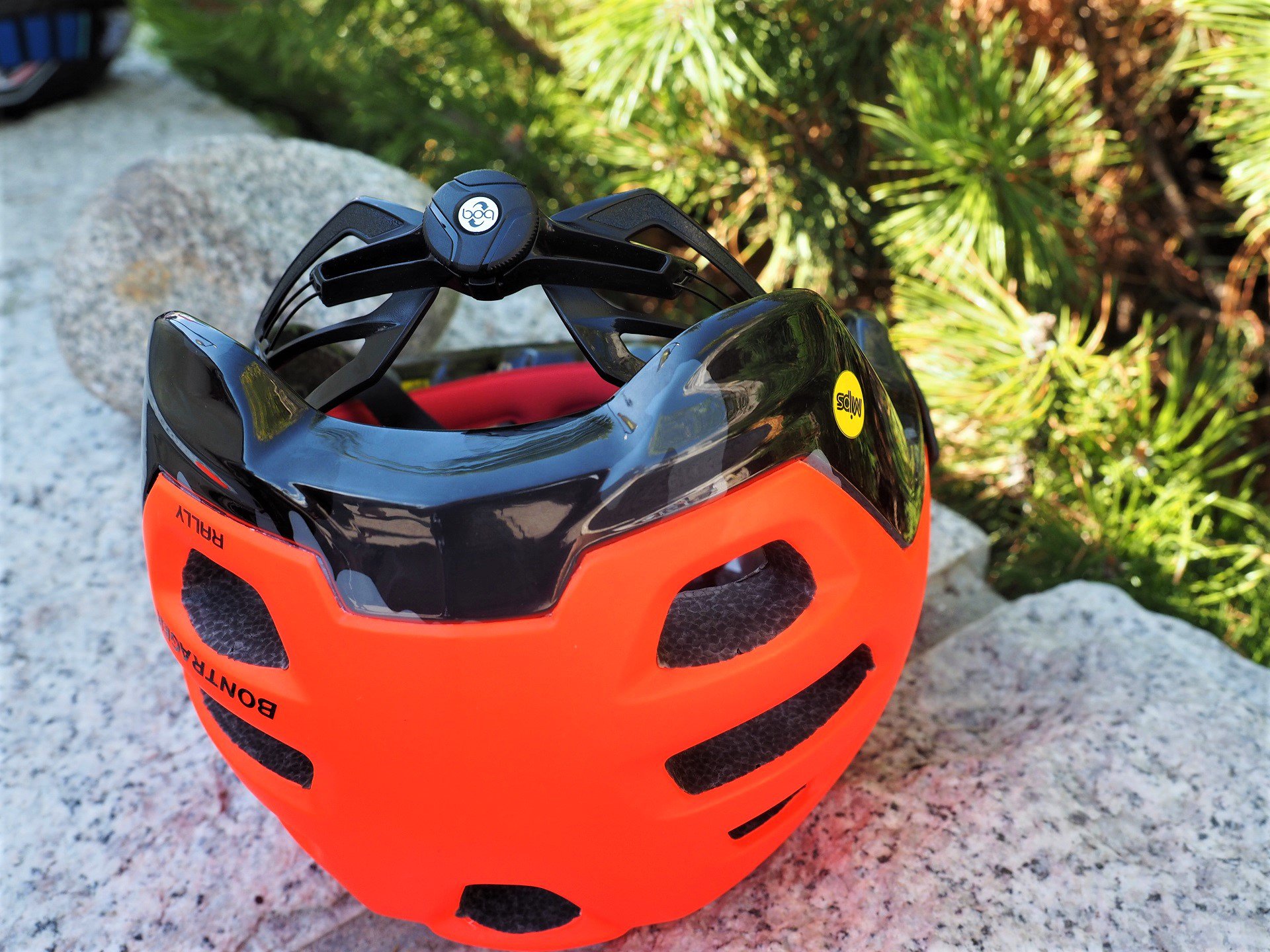 Turn the dial just like any other helmet. The BOA system snugs up perfectly with no pressure points at all on my head. 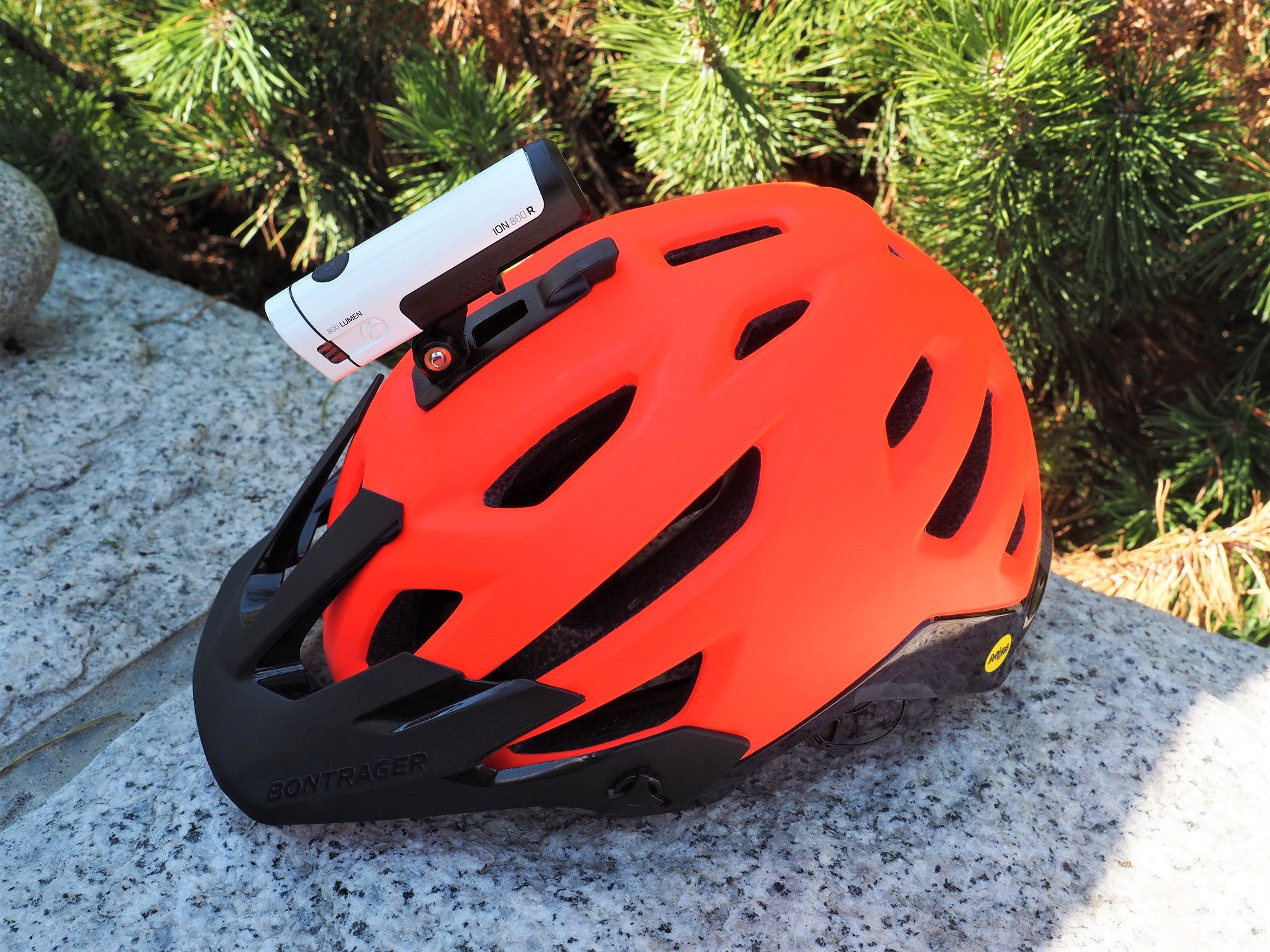 Bontrager's accessory mount is magnetic. It stays put and functions silently but can easily pop out in a crash. Lights, cameras; action.

Given that Min-Maxing is one of my favorite topics I would have been remiss if I didn't keep my eyes open for great examples. I came across this sweet 2016 Giant Reign 2 in the pits - which just so happens to belong to my friend Denton 'ButterTarts' Anderson: 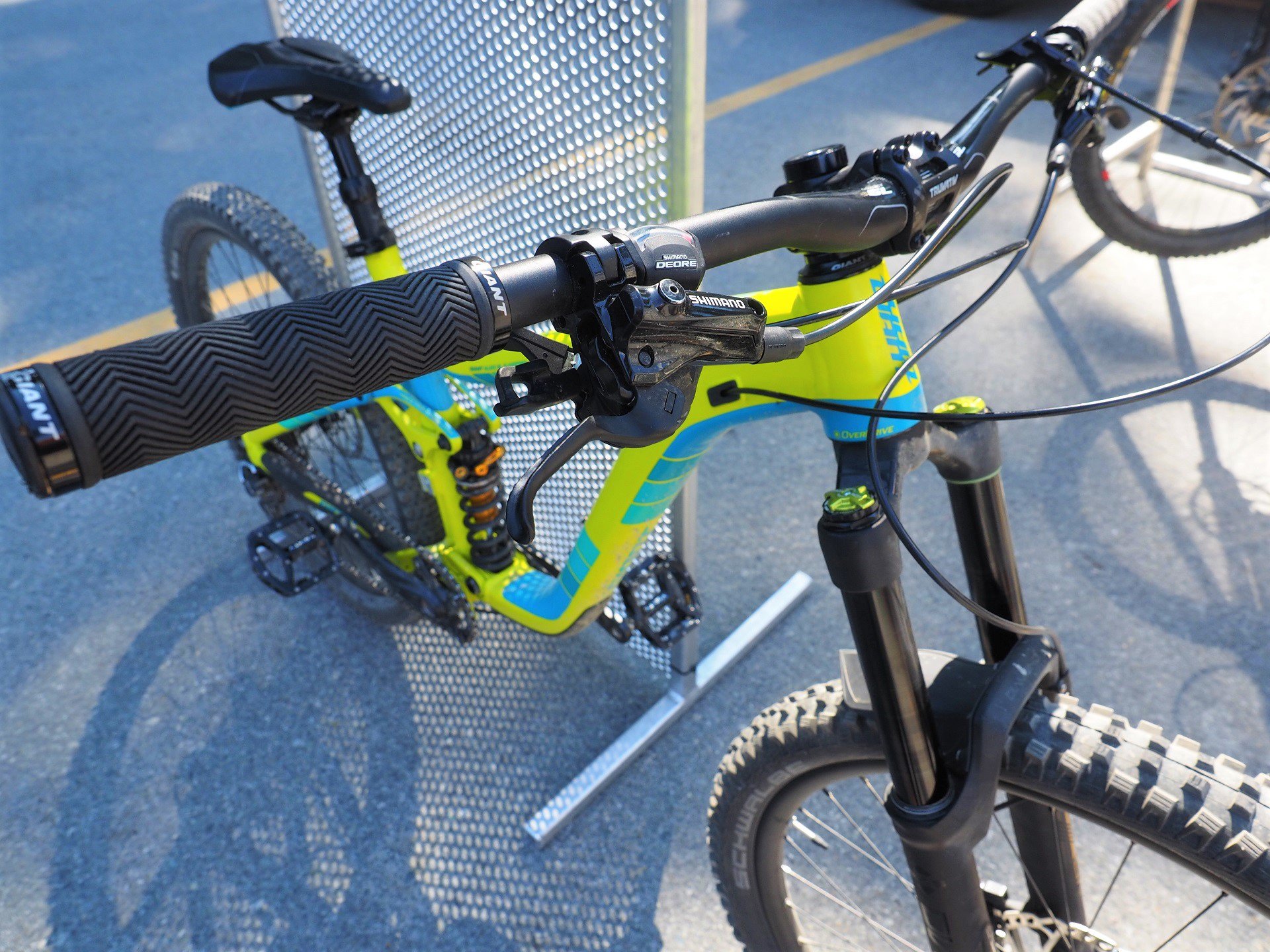 Money where it matters. Denton maximized performance per dollar by choosing an aluminum Giant Reign 2 and then upgrading the suspension to a Cane Creek Inline Coil shock and a DVO Diamond fork. A pair of Magura MT Trail Sport brakes is next on the list. 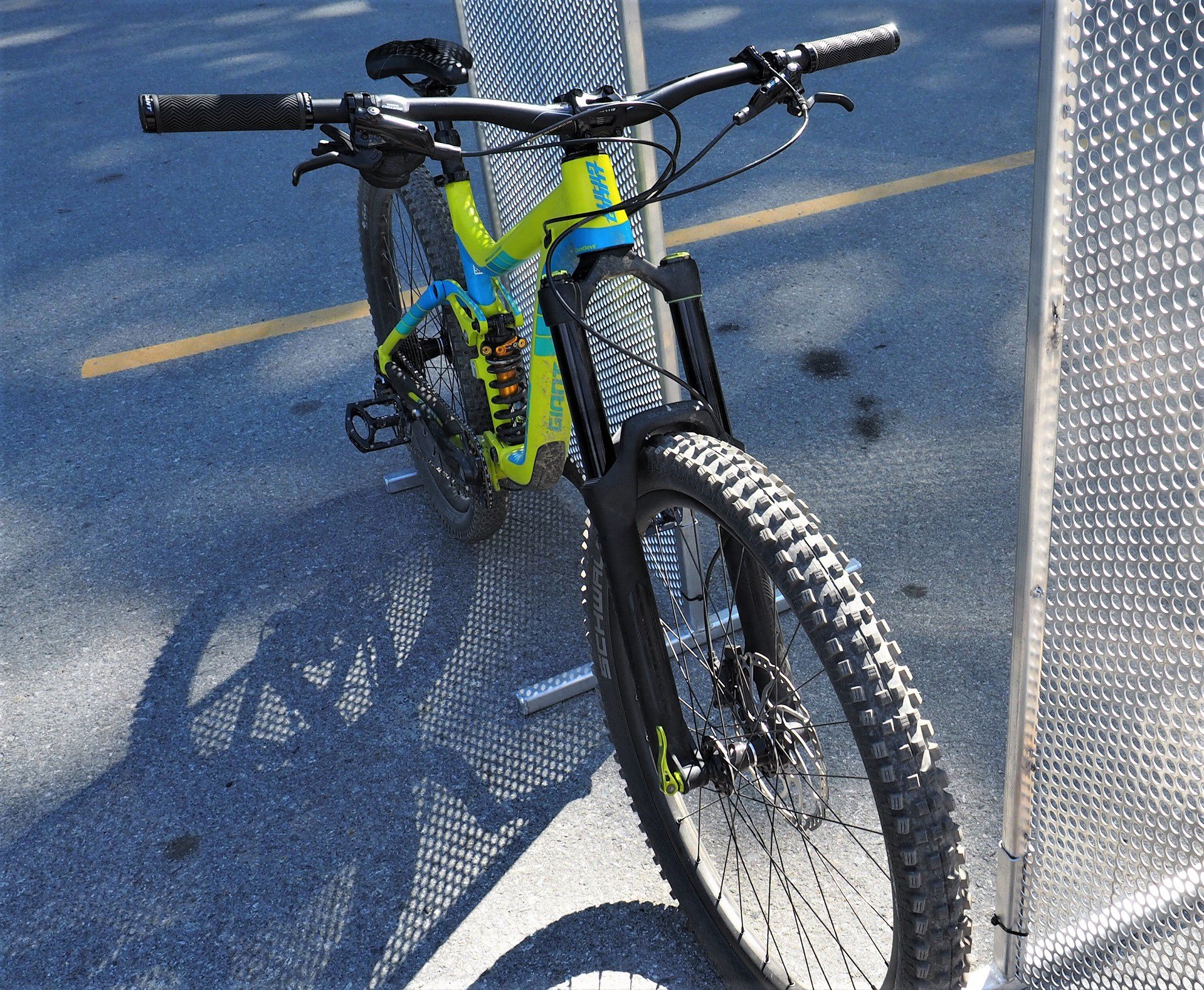 The tires have also been upgraded to a Schwalbe Magic Mary up front and a Rock Razor in the rear instead of the good looking but poor riding 'Performance' version of Schwable's Hans Dampf tires.

Crankworx was definitely quieter this year than last. At the same time it was an awesome year to hit the various brands present for in-depth product information. I don't mean for myself but rather I overheard some awesome conversations between riders and the mechanics and tech reps present.

Any bike nerds in the market for a bike in 2019 who has a chance to go up to Whistler would be well served to walk the through the pits and village.

That RS shock remote looks like it was stolen off a lawn mower, a cheap nasty lawn mower. The first over the bars crash and that thing will be history. Please can we stop the remote madness. It's just more crap on the bars and more crap to fail.

I definitely hope if remote shock controls are coming back that RockShox pursues development of the GripShift style BlackBox remote - hence highlighting the difference.

I fully agree with you re. less crap on the bars and especially less cables. My favorite bike has three (ones the dropper post). That said the demand is definitely there for shocks with remote pedal assistance.

I do think that Scott (see fresh piece here) has cleaned up their cockpits as much as possible by integrating the shock, fork and dropper remote. Eliminating the stem bolts also somehow makes the two additional cables seem less garish.