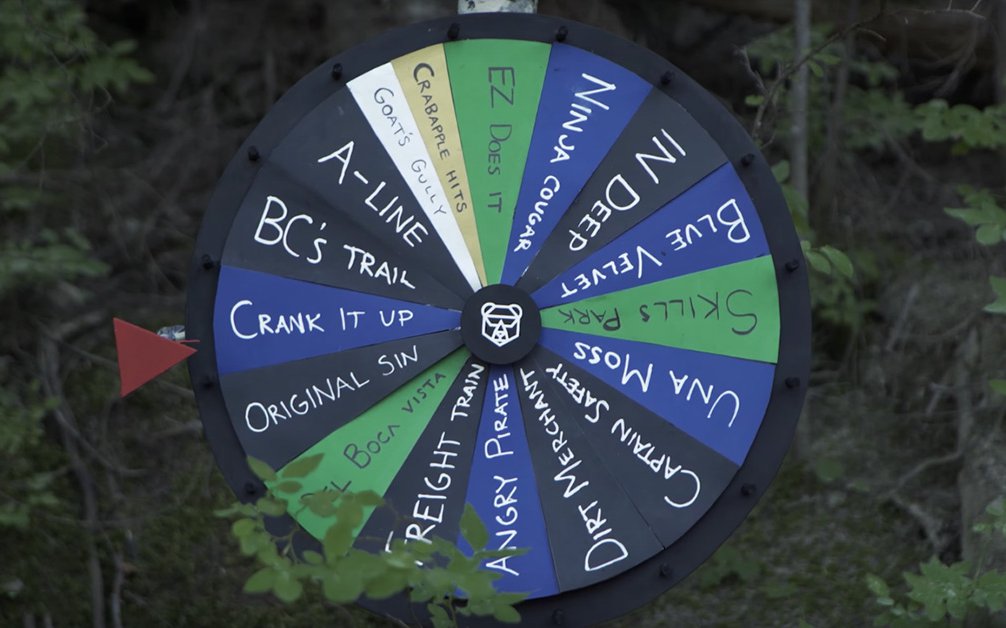 It started as a conversation on the way to Crankworx 2016 about the stabby pointy jabby little “OW! BASTARDS!” Ends that get left on zip ties that show quite plainly that whoever worked on the bike you’re looking at either wasn’t trained or doesn’t care. Shave ’em flush people. Seriously. It became an entire day’s obsession. The small things. Differentiators. The unique details in a sea of similar products and services that upon closer examination make them worthy of consideration. 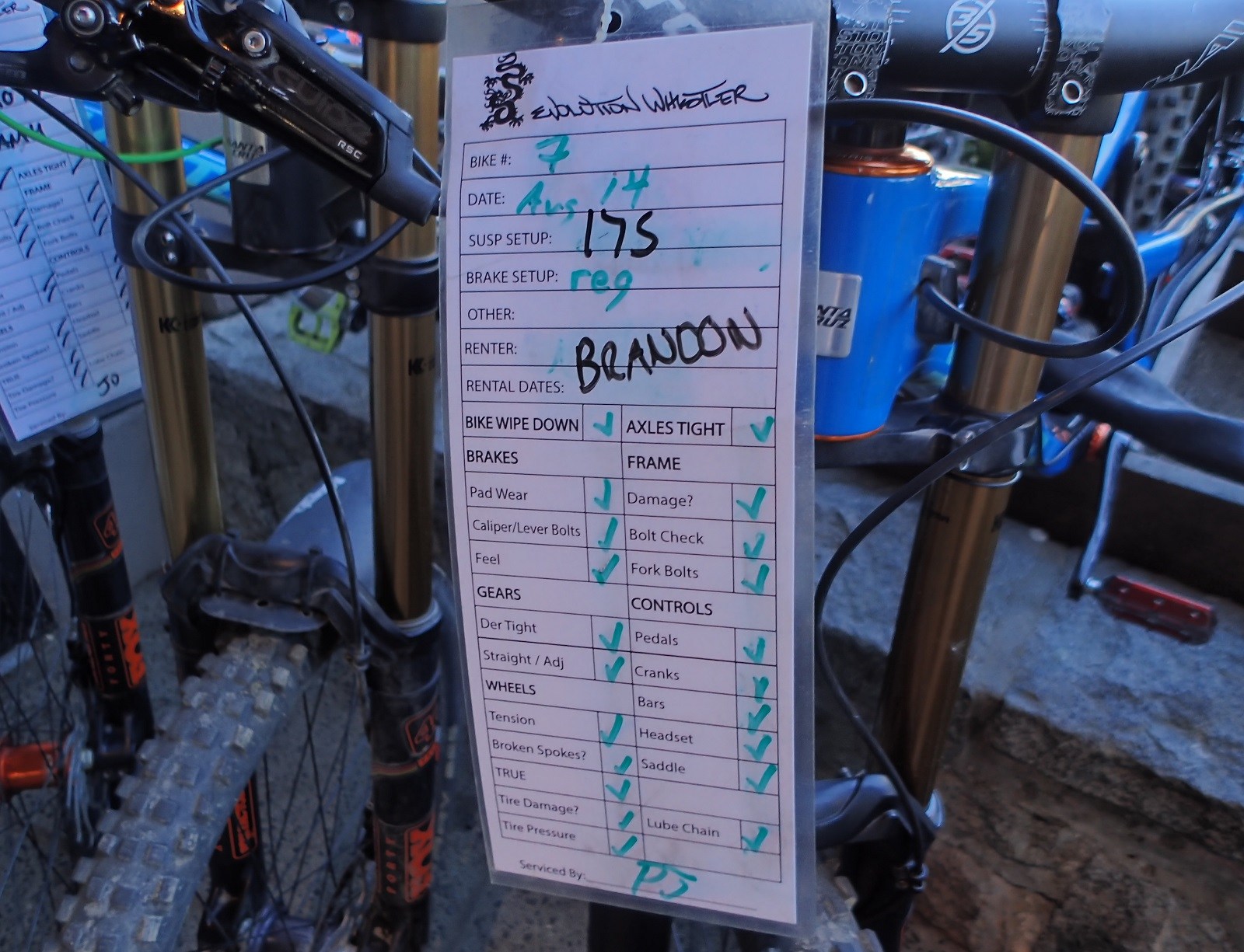 Evolution is one of Whistler’s iconic shops pumping out same day repairs, renting bikes, and apparently, if you keep an eye open you’ll often notice their signature thong underwear in the lift line. In the reality of a rushed world and tight work space mechanics sign their names to all their work – accountability is key.

Making my way around Whistler at 7:30am, Crankworx mid-week, everyone was still asleep except for the crazy race techs at the GT Bicycles booth in Lot 2 who already had their demo fleet ready to go and were building racers’ wheels for practice. With no product people around to avoid my questions about their new 29er DH bike, (smile, don’t make eye contact, change the subject) I wandered over to the village for coffee. 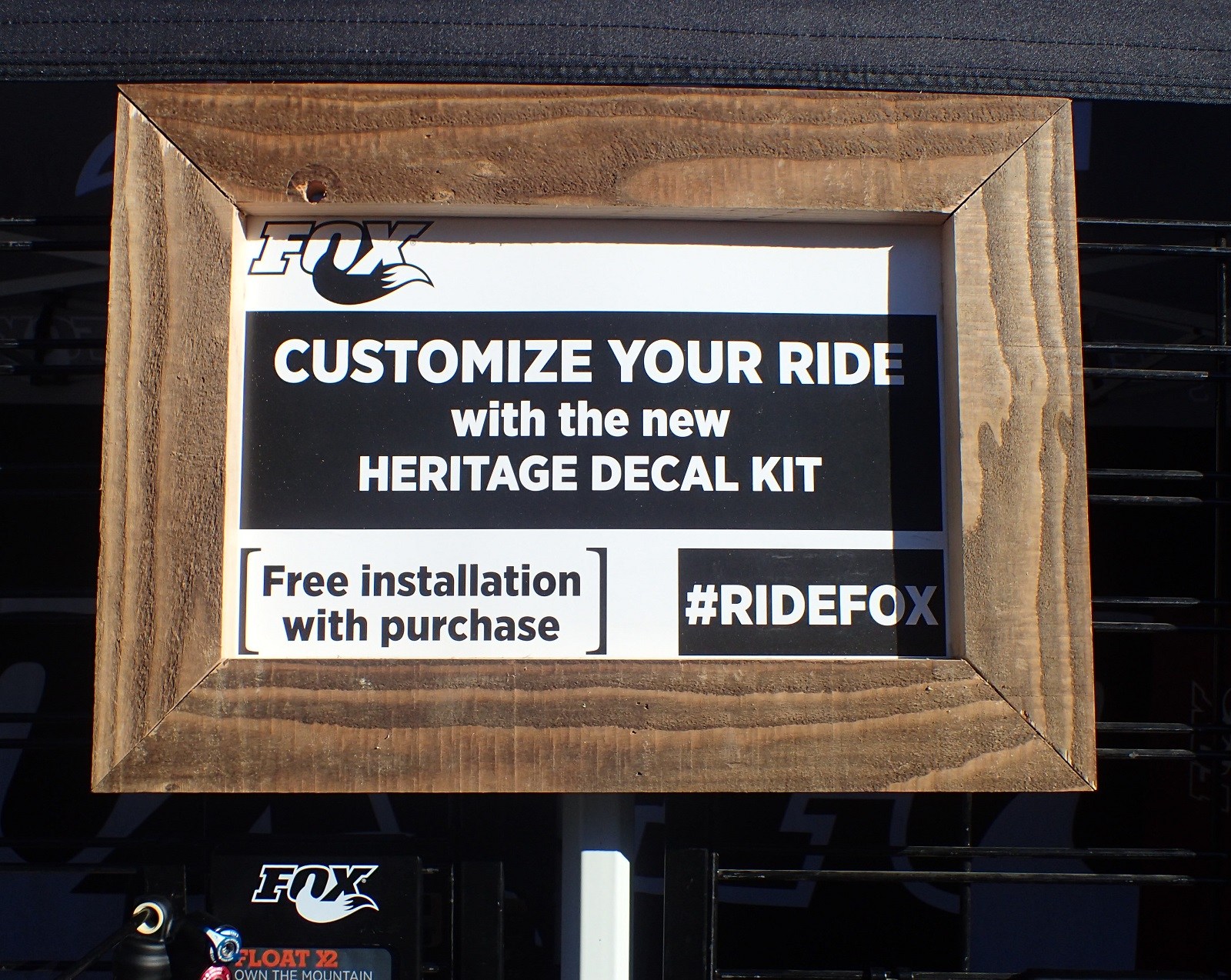 Formula’s gone Purple. Fox has gone Orange. I’m excited to see fork lowers in colours rather than shades. For those still rocking boring black, Fox is offering a huge selection of decal colours.

The rental bikes at Evolution Whistler, an iconic local shop, were all outside adorned with service checklists prominently holding their technicians to account for their labours. My friend Jeff, of Bikeroom fame, couldn’t resist squeezing every brake lever on every bike. They were all perfect. So were most of the zip ties. Accountability for the win. 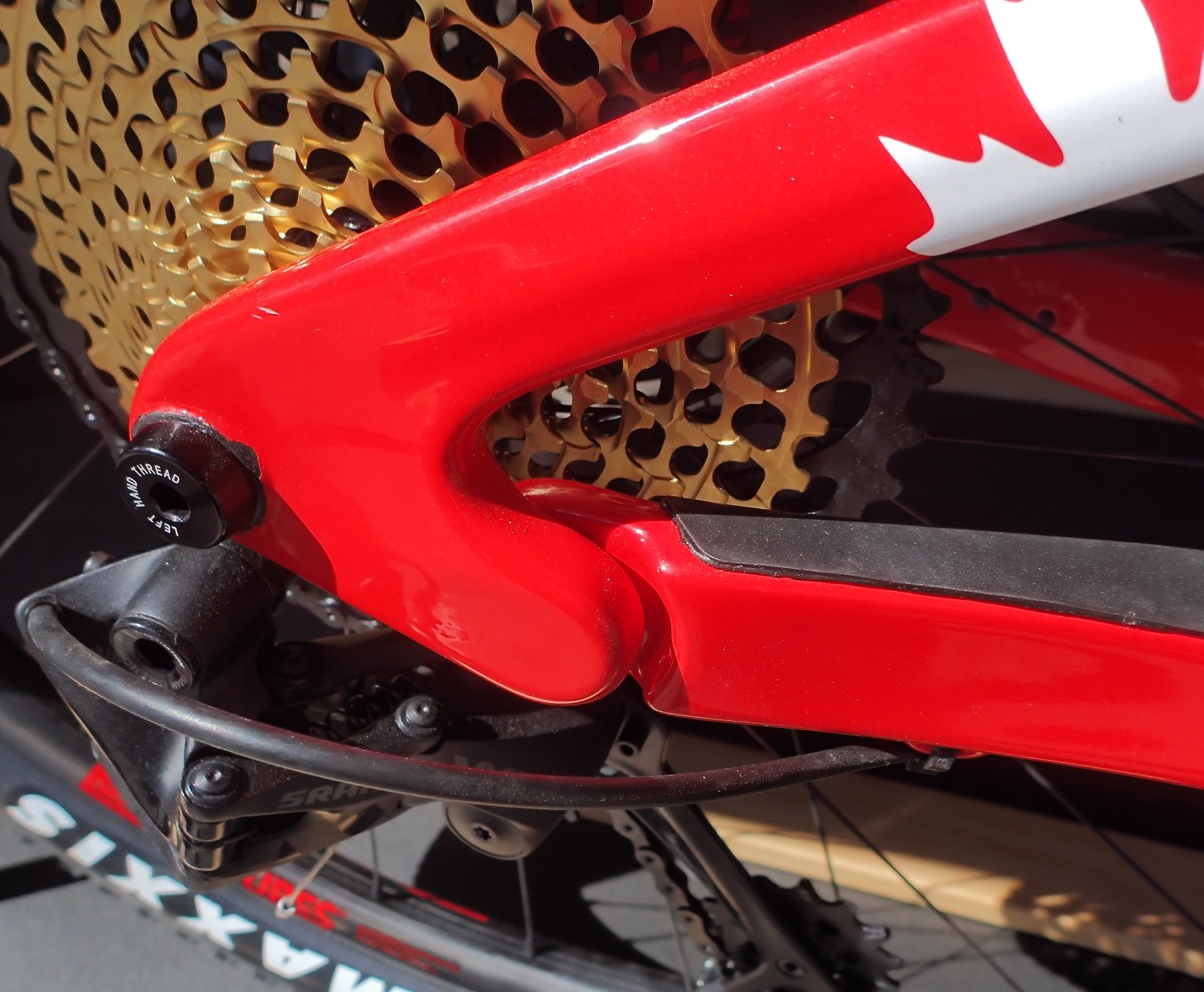 Sweet single clevis dropout pivot with the hardware inside on the new Rocky Mountain Element. It’s a 148mm Boost spacing bike with the resultant wheel stiffness and tire clearance advantages and it has more heel clearance than the previous generation’s bike at 142mm.

I hadn’t had a chance to check out the new Rocky Mountain Element yet so one of my next stops was to see product manager and consummate bike nerd Ken Perras who almost immediately pointed out, with a totally acceptable level of disdain, that the bike was missing a zip tie. Small things.

The new Element is getting rave reviews but there are a lot of great bikes, and no clear best-in-class model in the short travel XC/Trail 29er dual suspension category, so it’s a justification for looking at details. My favourite part is that they’ve managed to incorporate 148mm Boost spacing for added stiffness, tire clearance, and dialed chainstay length. Rocky has also increased heel clearance over the previous non-boost Element by using clever pivot hardware and a single sided clevis. I’m a notorious heel rubber so this is a great detail to me. 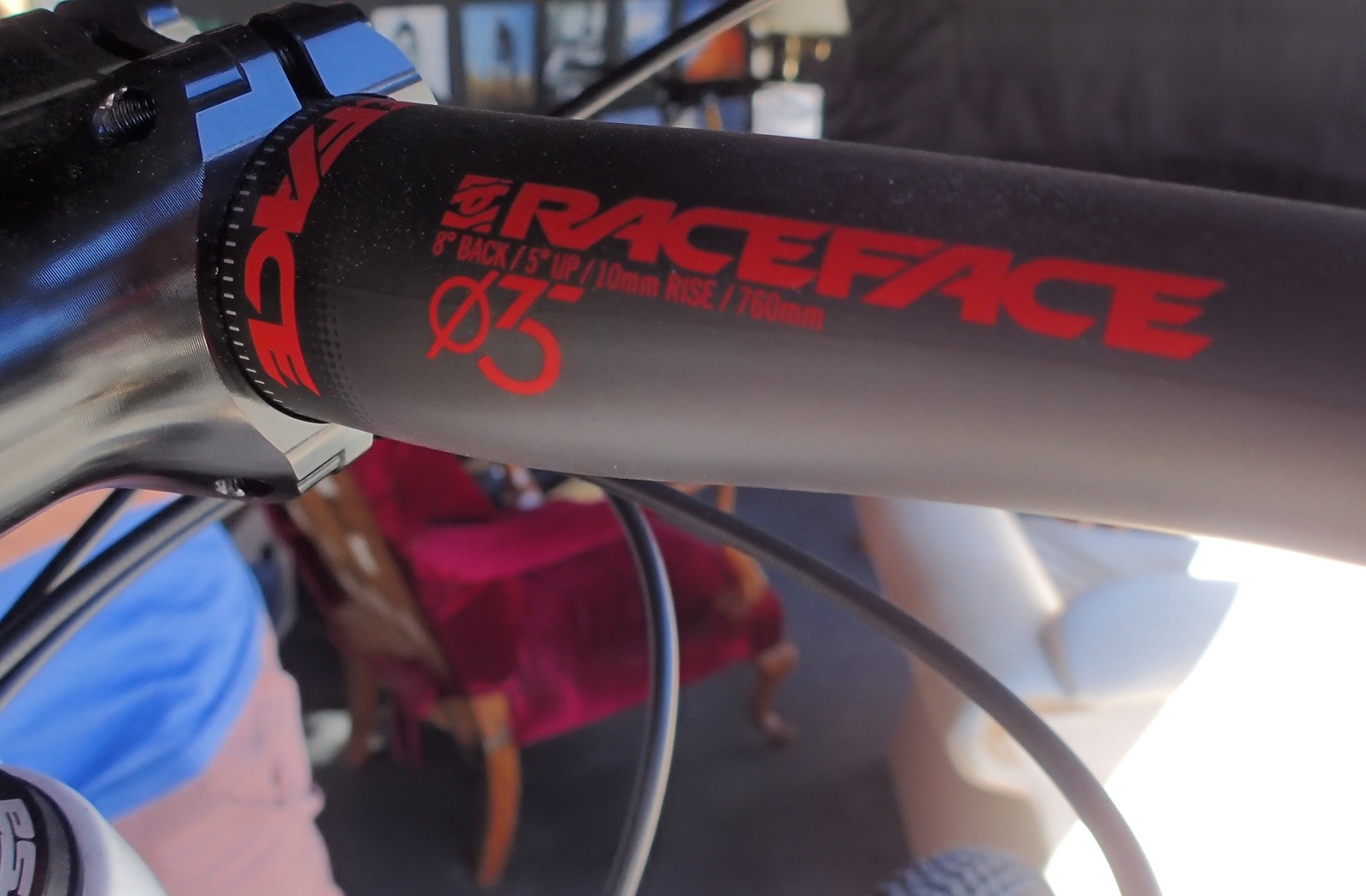 Over at the SRAM tent, they were going to start booking service at 9am. The lineup to be first in and ergo first out, had started forming around 7 am. Shawn Cruickshanks of Fluid Function, our local SRAM wizard, told me they would be fully booked by 10 am.

Shawn was one of many techs with precision Abbey Tools on his bench. The chamfer-less alloy sockets are lightweight for travelling and they won’t slip or scratch top caps when you’re pounding through fork services. But, the tool that caught my eye was a bent rotor mounted to a stub of handlebar. 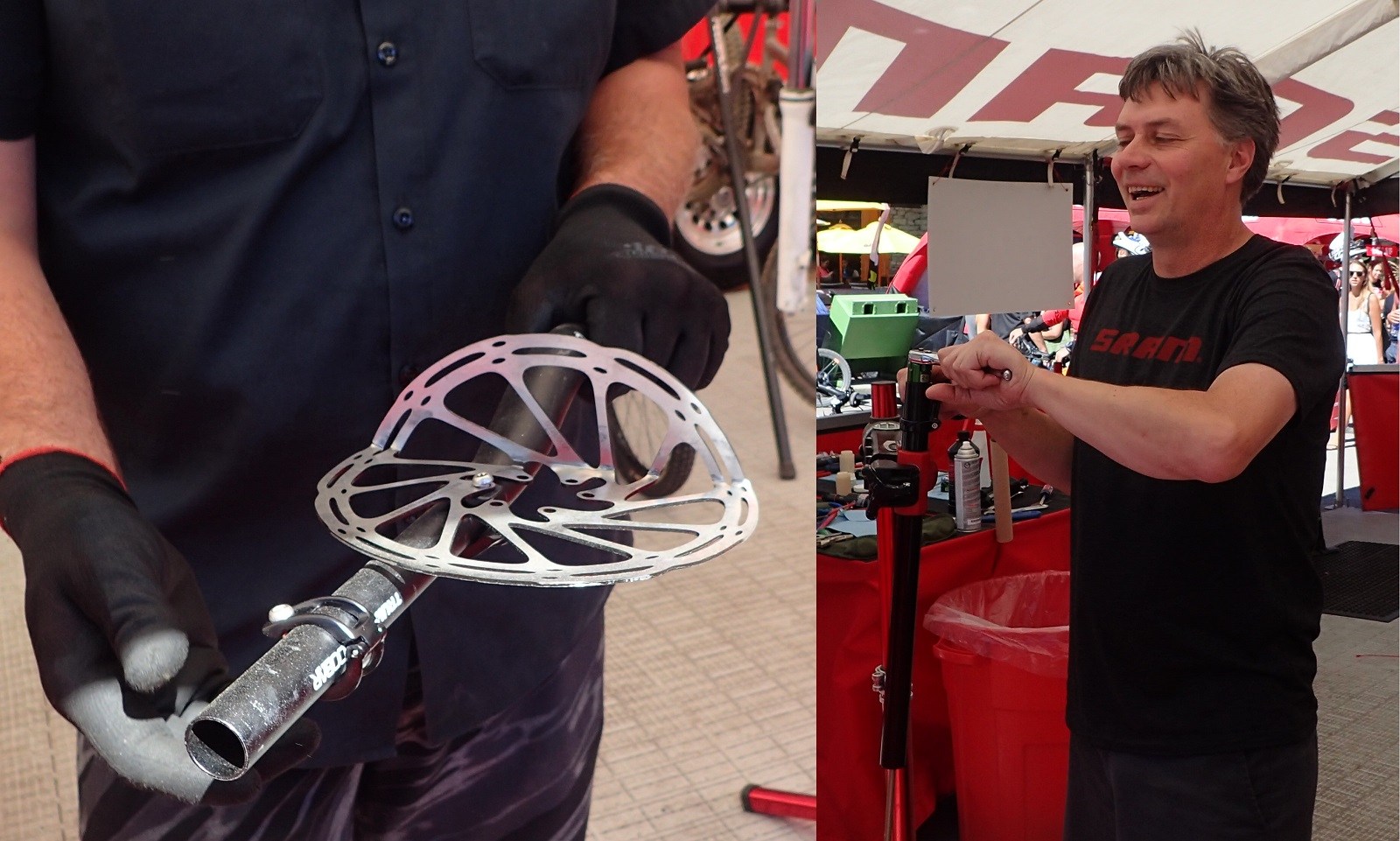 Custom brake bleeding tool and smiling Shawn ‘The Wizard’ Cruickshanks at the SRAM tent. With long lines, firm deadlines, and the unwashed masses on vacation, you have to service everything right the first time.

With riders dropping off their brakes for service sans bikes this handy homemade tool gets mounted in a stand or vice and then the master cylinder is bolted on to the bar. Using a rotor allows for perfect pad spacing when the brake is returned so they can guarantee your brake will work properly when you re-mount it.

Another little SRAM detail worth noting is that all brakes appear to be coming with their quick connect bleed fitting. It’s a nice upgrade that makes their systems even easier to bleed as I noted in this teardown. 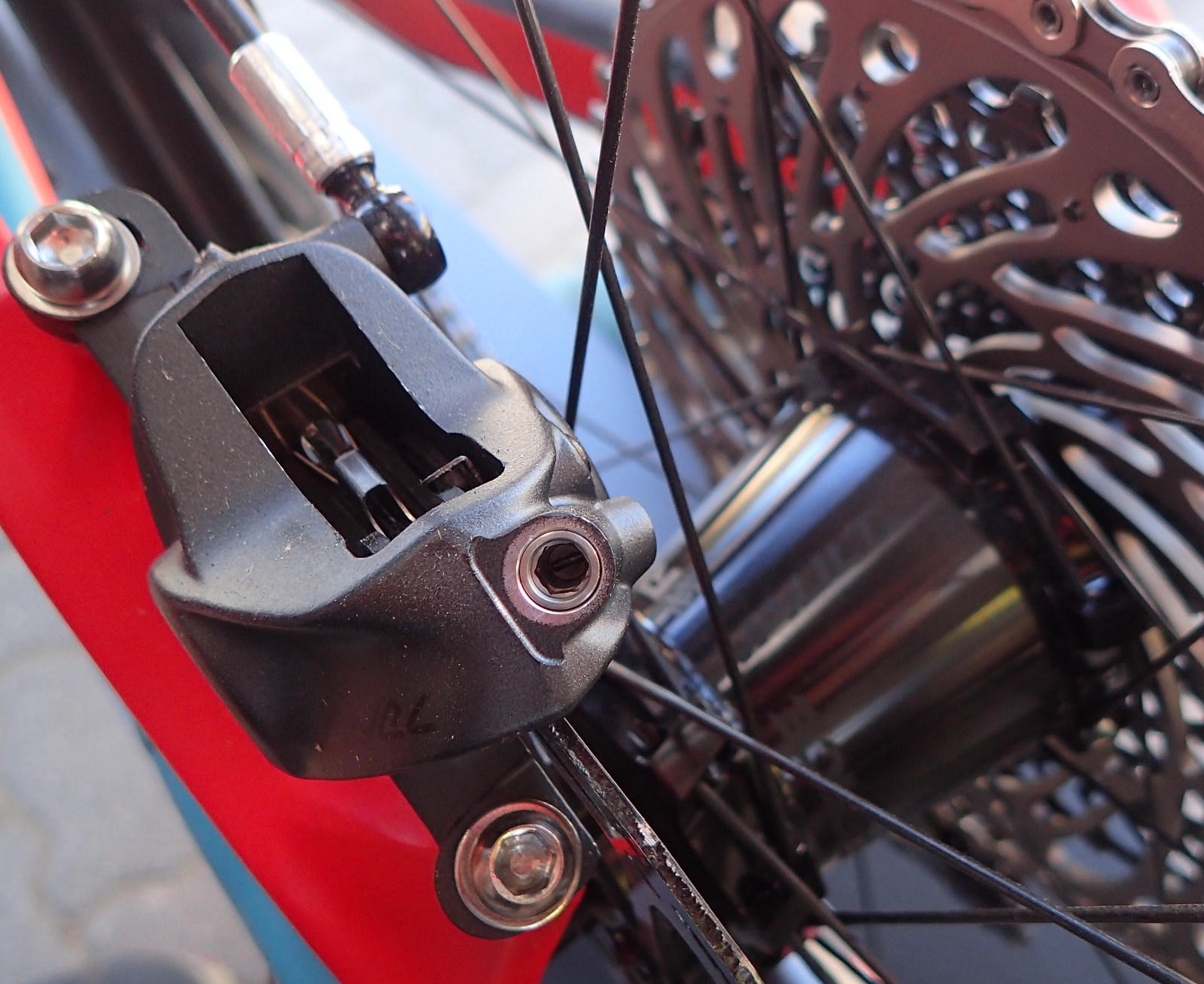 SRAM quick connect bleed fittings on the caliper make for even easier, cleaner, brake bleeds than in the past. Small things.

They’d probably be inclined to disagree with me, but absent their new electronic mountain road bike drivetrain, the most interesting thing at the FSA booth was definitely a very small detail. New FSA stems are coming with a flush-mount faceplate design like Easton, Straitline, and Renthal have been using.

You tighten down the stem’s faceplate so it is flush at the marked end and then torque the two remaining bolts to hold the bar in place. I would be surprised if all stems don’t function similarly at some point in the future as it simplifies set-up and adjustment with no negative aspects. 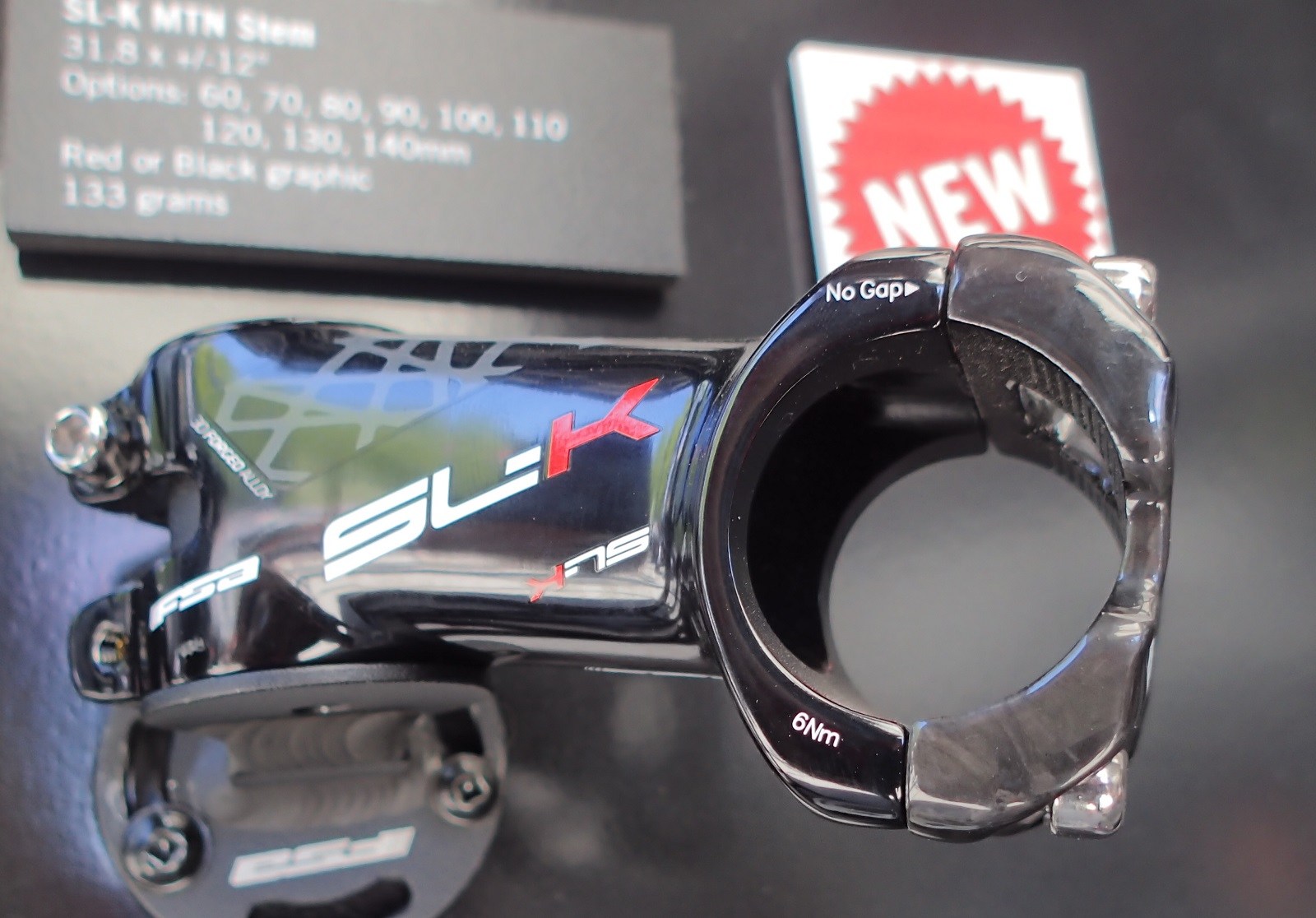 FSA joins Easton, Renthal, and Straitline – and probably others I can’t think of off the top of my head – in moving to faceplates that mount flush at one end and then are torqued into position at the other.

I’m a big fan of waterproof clipless shoes in the winter and I have enjoyed several generations of Shimano’s MW lineup. They’ve also had a few iterations of hiking-boot-style clipless shoes that never really captured my attention.

I spotted these boots a mile away and was immediately drawn to the simple utilitarian look, functionality and really nice materials and construction. 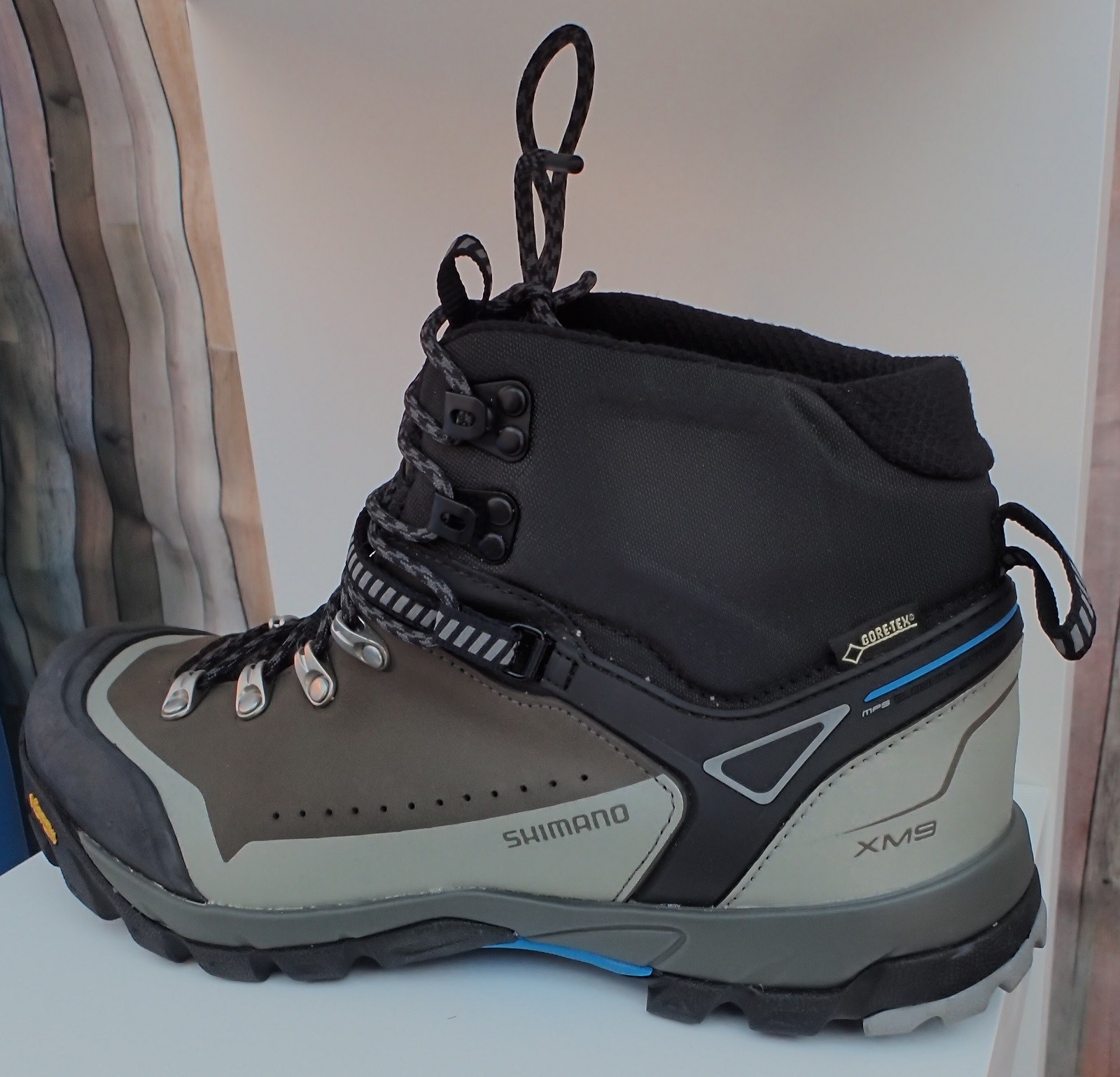 Nice details grabbed my attention from a mile away. Utilitarian look and construction and a GoreTex membrane for wet winter cycling in the Shore-To-Sky corridor?

I couldn’t help but stop and have a look at Stevie Smith’s DH bike on display at the Devinci booth. It was easy to find with a huge number of people milling around in red memorial T-shirts.

Nigel, Steve’s mechanic, is all about details and the specifics on the bike were perfect. I was particularly drawn to the use of a rubber Reverb hose guide mounted to the fork’s upper crown to steer the brake and shifter cable above the race plate. Nice.

Details this minute may not be the difference between winning and losing but all the small things add up. You do beautiful work, Nigel.

In addition to the new Cane Creek DBCIL shock and VALT spring, the well-loved CCDB Air CS shock is now available with a black shock body that you can also buy as an aftermarket (cosmetic) upgrade for your existing shock. They made it because their customers asked for it. Cool. 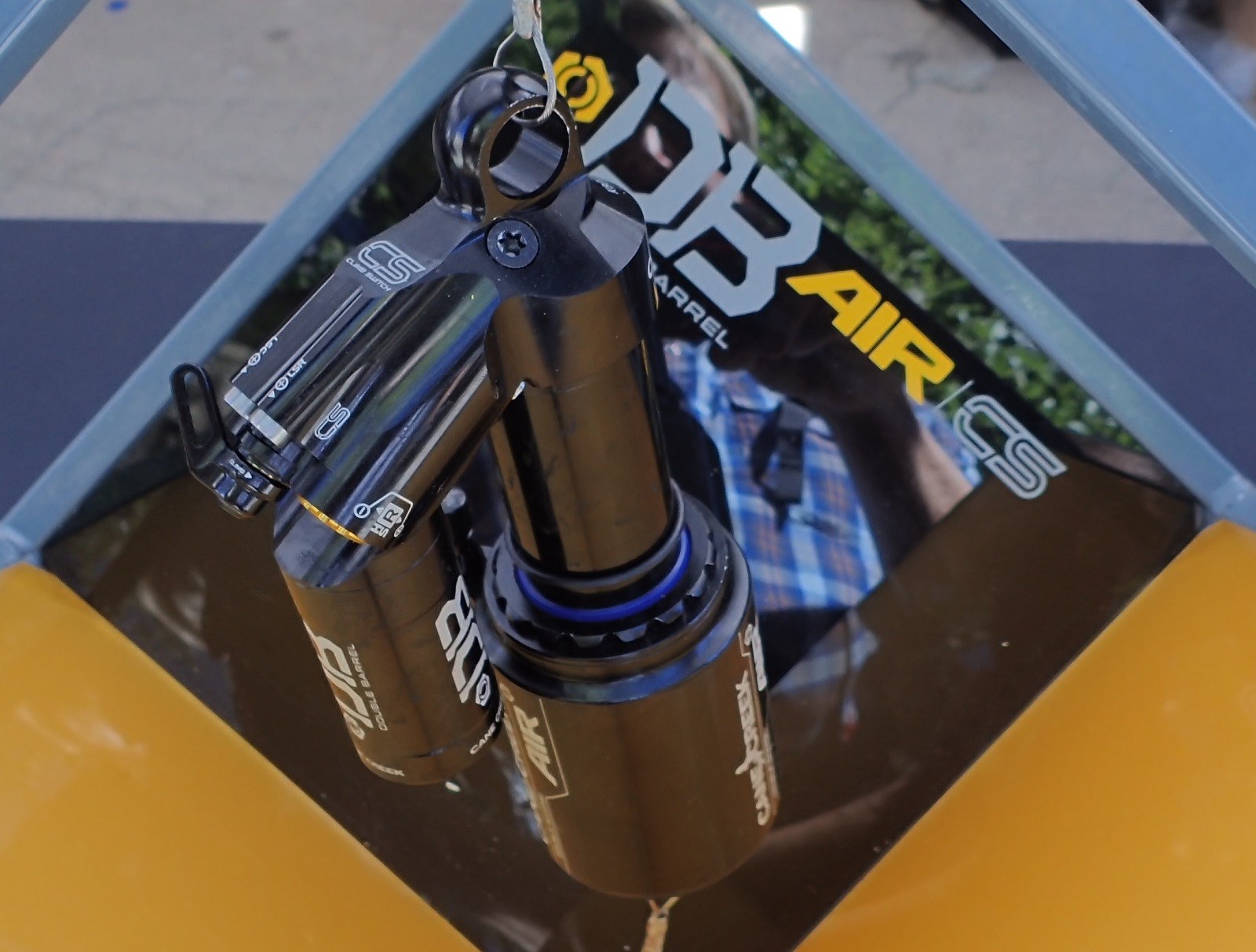 The Cane Creek CCDB Air CS shock is now available with a black shock body that you can also buy as a replacement option next time you get your shock serviced.

Speaking of Cane Creek, I stopped by Lot 2 to visit our friends from SuspensionWerx to harass them about booking a teardown for a new Cane Creek DBCIL and to see what small things were happening there. Lots of custom damper tunes was the answer. If you haven’t had your fork and shock serviced for a while, a routine full factory service is a great idea. If you are trying to get more out of your suspension, companies like SuspensionWerx, Push Industries, and Fluid Function may just blow your mind. 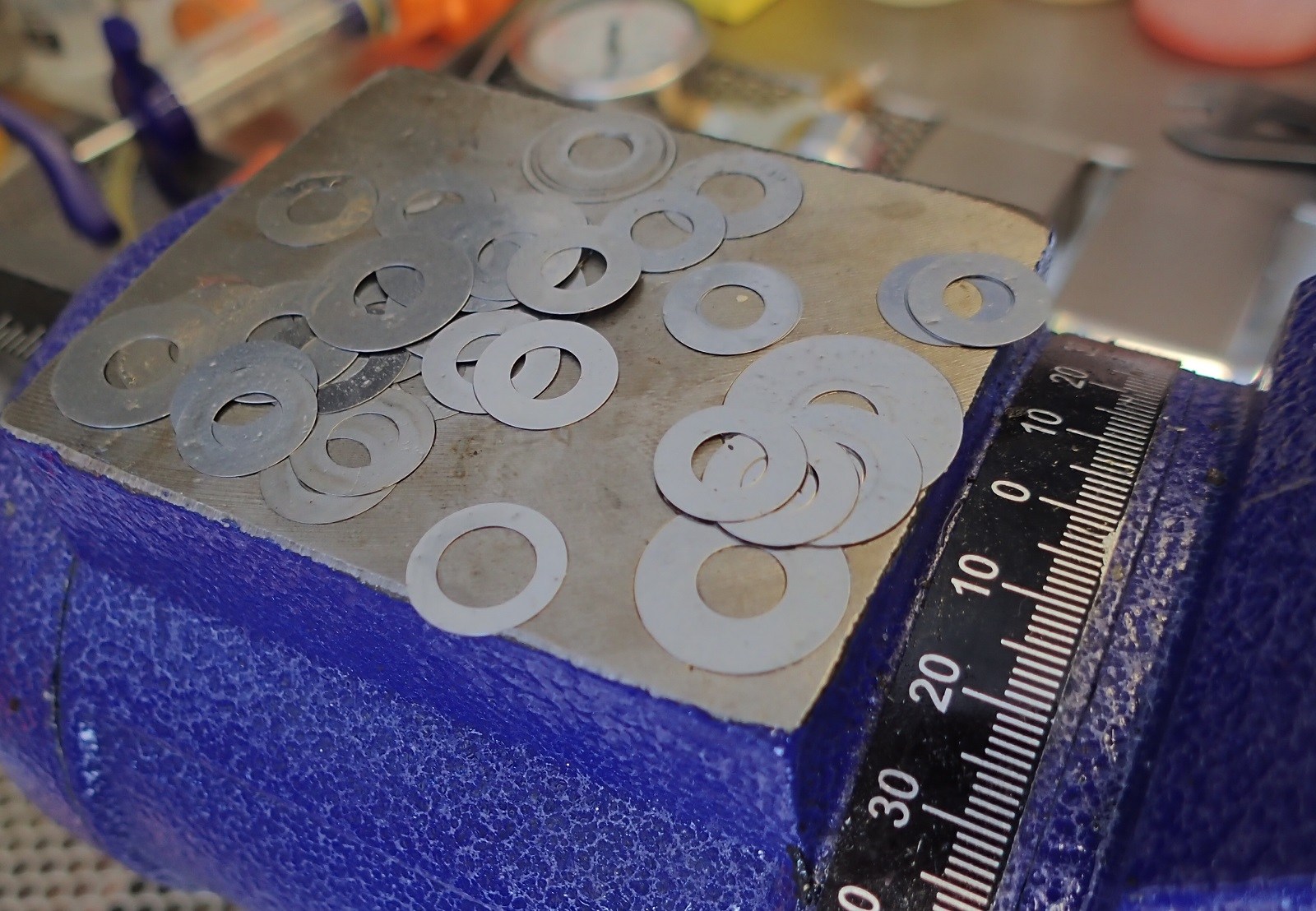 Speaking of small things. Damper shims having been swapped out as part of custom suspension re-valves.

I went by Trek’s booth to check out their new tire program but other than what was mounted on bikes, there was nothing on display. It’s too bad because some models are getting rave reviews. The price point in North America is more reasonable than Maxxis or Schwalbe, and I find it is easier to appreciate the construction – bead, sidewall, compounds – with a tire off a rim. I mention it because the gents working in the booth indicated there is a plethora of cool Bontrager rubber coming down in short order.

I had my first look at the new Bontrager –branded dropper post which is featured on many of Trek’s bikes this year. The one-piece head and shaft is a very sleek detail and also one less thing to go wrong. 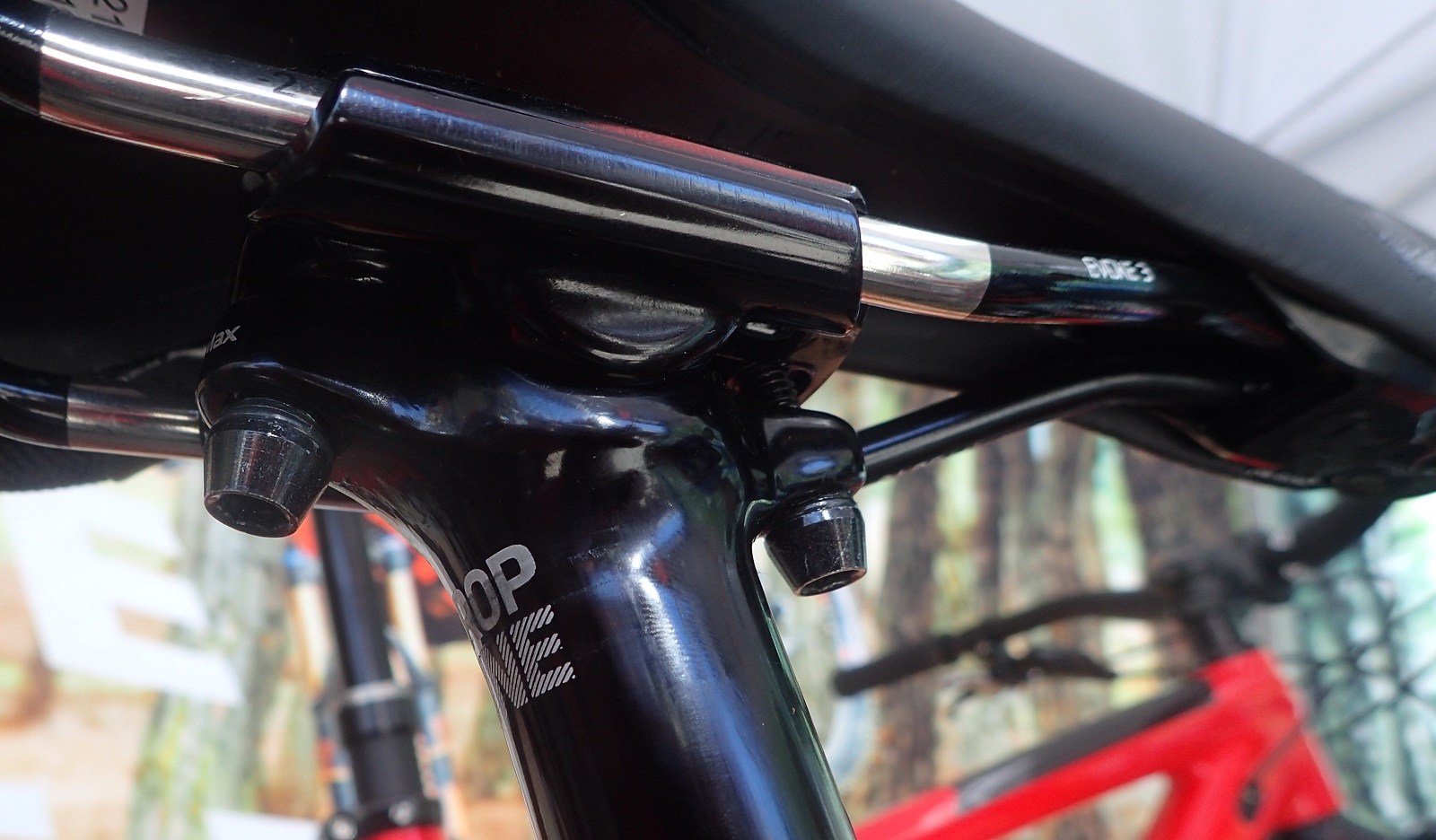 In hindsight, I should have filmed my conversations with Ken from Rocky Mountain and Chris Cocalis from Pivot Bicycles. NSMB.com could have spliced them together and started a new drinking game. You must drink every time one of them says “future proof.”

Actually, it’s refreshing to hear bike designers talk about their customers’ purchases as investments and wanting to plan for changes they foresee. The new Maiden, for example, is 26+ compatible. Is that really a thing for DH bikes? No, but it could be. So if you’re doing a DH bike design and you can easily make it compatible with no sacrifices to performance or additional costs, then why wouldn’t you do it? Great thinking. 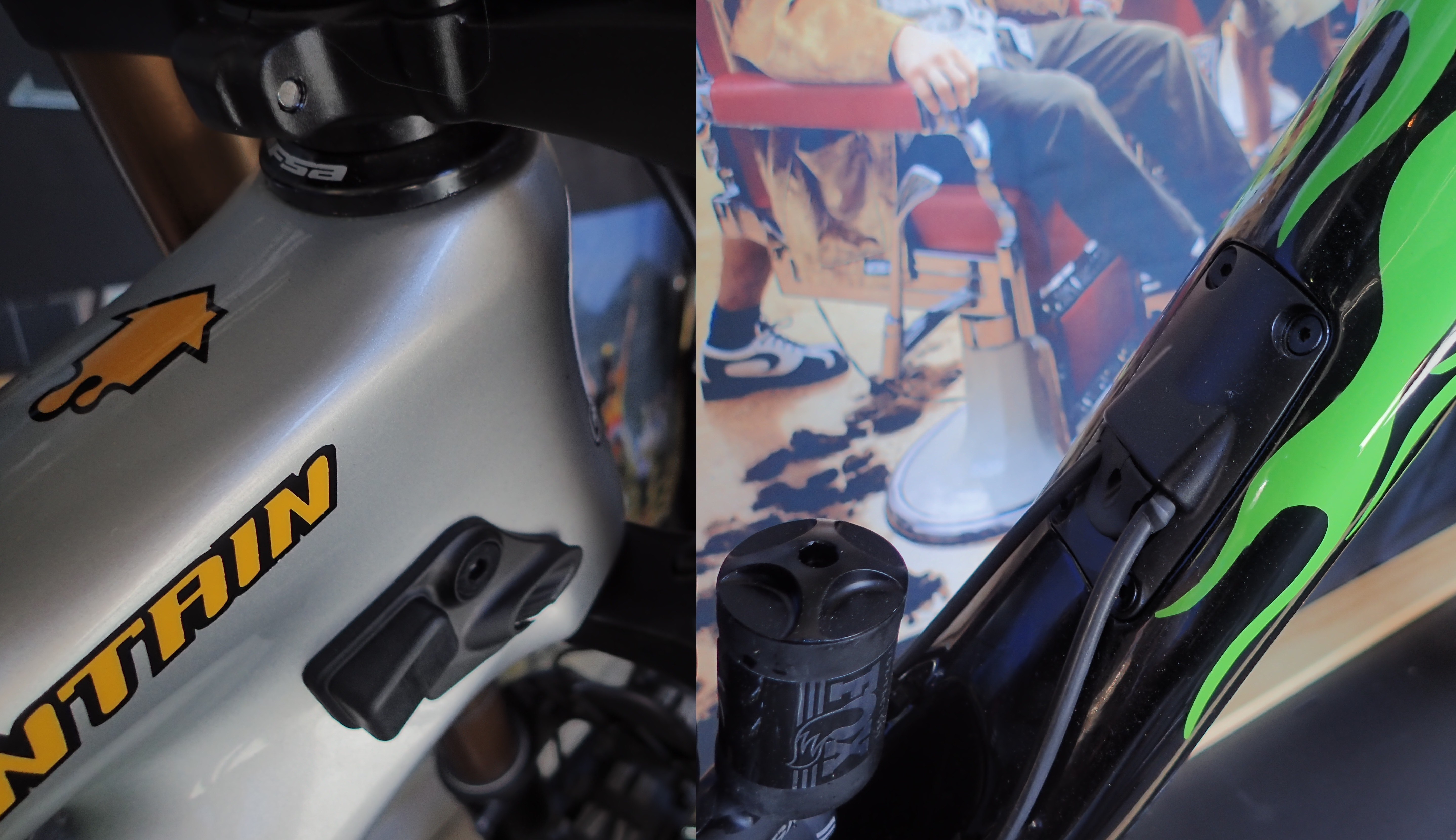 You probably don’t care but the Maiden is 26+ compatible because “why not?”. More importantly, the integrated cable guide/fork stop and cable exit port are easily replaced and could be manufactured for compatibility with any future cable, wired, or hydraulic drivetrain or braking setups.

The Rocky Maiden and Element and the new Pivot Firebird share a higher passion for design when it comes to future-proofing the cable routing. Once stripped of their cable port covers they all allow a heck of a lot of sunlight to shine through in the name of being able to adapt to future electric and cable drivetrains.

Small things? The little bolt-in cable guides actually apply light pressure to the housing to keep it from moving and to eliminate the cable rattling noise that plagues some internally-routed bikes. 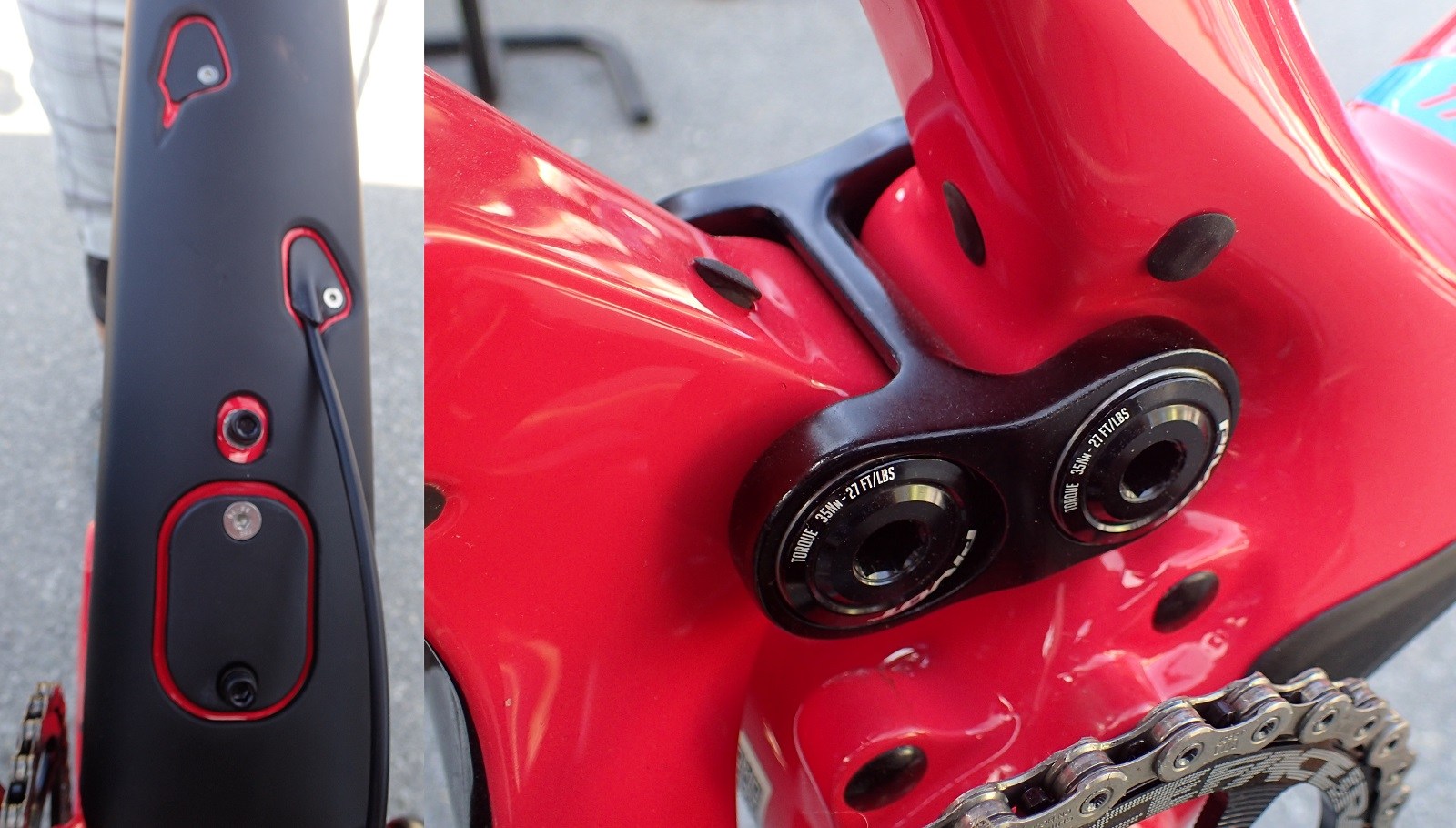 The new Pivot Firebird, like all their bikes, is loaded down with sweet, thoughtful, little details. Like their removable front swing front derailleur mount and copious cable entry options and battery storage setup.

I know I said I’d keep it positive but I did want to throw out a quick note to companies that aren’t sweating the little things. It’s pretty obvious who you are and as the performance of bikes seems to be ever tighter in every category those details are only going to matter more. R&D (Rip off & Duplicate) is a time honoured industry tradition and it will be very interesting to see if everyone gets on board with a deeper level of design detail.

Do details influence your purchase decisions?

Glad to hear the industry is at least giving lip service to future compatability. This will be interesting to check in 2 years.

As a basement mechanic who is in charge of the keeping my wife's bikes working properly ["My bike is slow! FIX IT!"], I really appreciate design elements that save me time and effort. Bolts that stay tight, 5-minute parking lot brake bleeds [Shimano!], reusable chain disconnects [KMC!], and a host of other things that make my life a little easier.