The FAT bikes are coming. We think they are, anyway. Given the number of monstrous tires rolling around at Bootleg Canyon today, a lot of people are curious about  adding more girth to their dirt diet. It was high time we gave ’em a look, so we rolled past the Surly booth and I selected an Instigator, which features 26″ rims with high profile Surly Dirt Wizard 26 x 2.75″ tires. The large tires create a 26+ outer diameter that is equivalent to 650B, with the benefit of a larger contact patch, more flotation and comfort provided by all that extra air. Unlike some of Surly’s far beefier fat bikes, the Instigator is closer to a trail bike, with geometry to match, including a 67.5 degree head tube, 16.4″ (416mm)  chainstays and 24.6″ (625mm) effective top tube length. 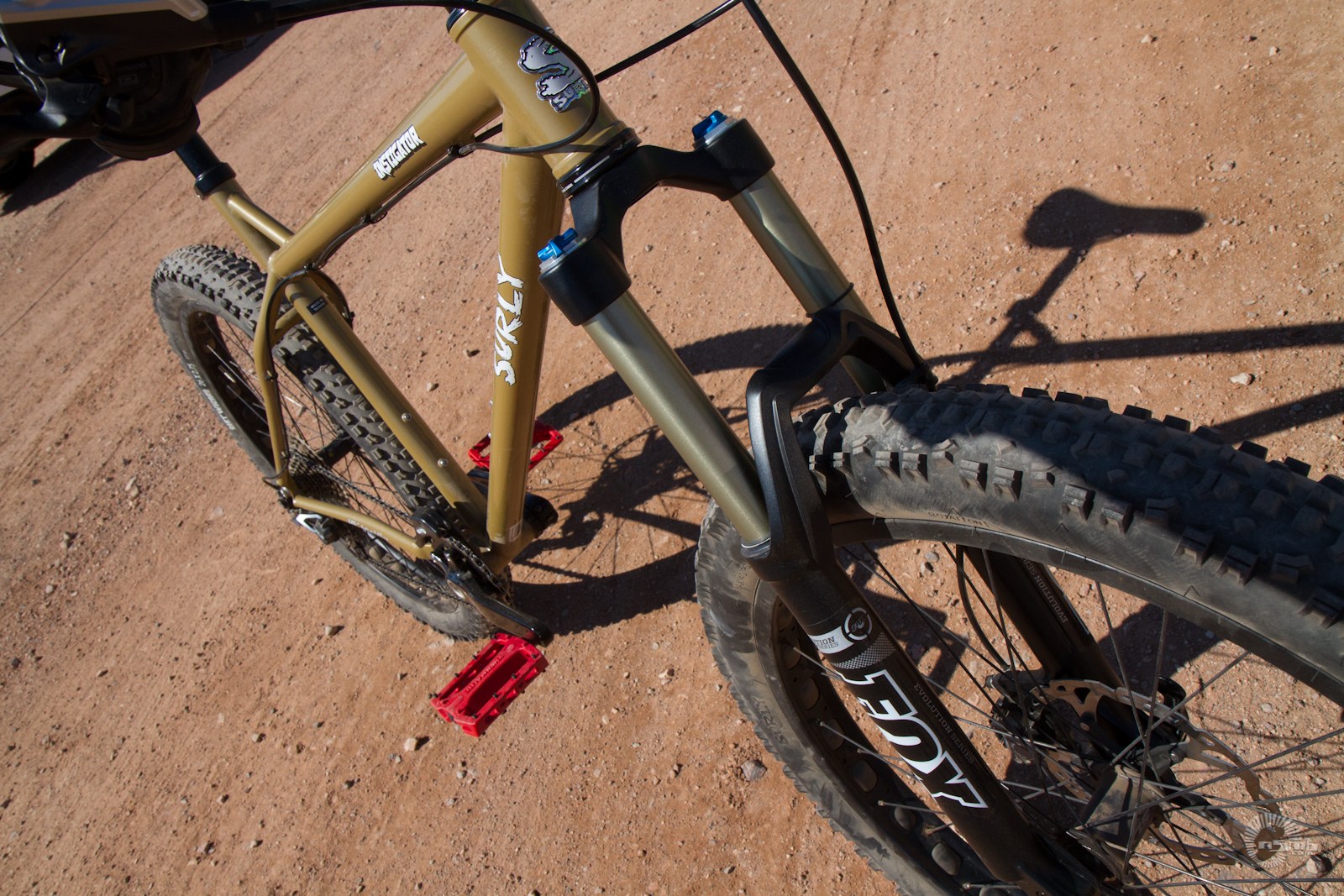 Complete with a Fox Float 32, the Surly Instigator could almost be called a fat bike/trail bike hybrid. Except that’s a dirty word in our world of enginerded purpose built bikes.

The 4130 CroMoly frame’s main triangle is TIG welded and double-butted, and many of the frame’s features revolve around choice. The 26+ wheel sizing allows the use of 650B wheelsets and forks; the Chip dropouts allow you to use virtually any combination of axle widths (135 or 142), diameters (10mm QR, 12mm thru) and types (singlespeed or geared). The 44mm head tube accepts tapered steerers and ISCG05 tabs allow a guide but you also get enough chainstay clearance to run 22/34/44 or 26/39. 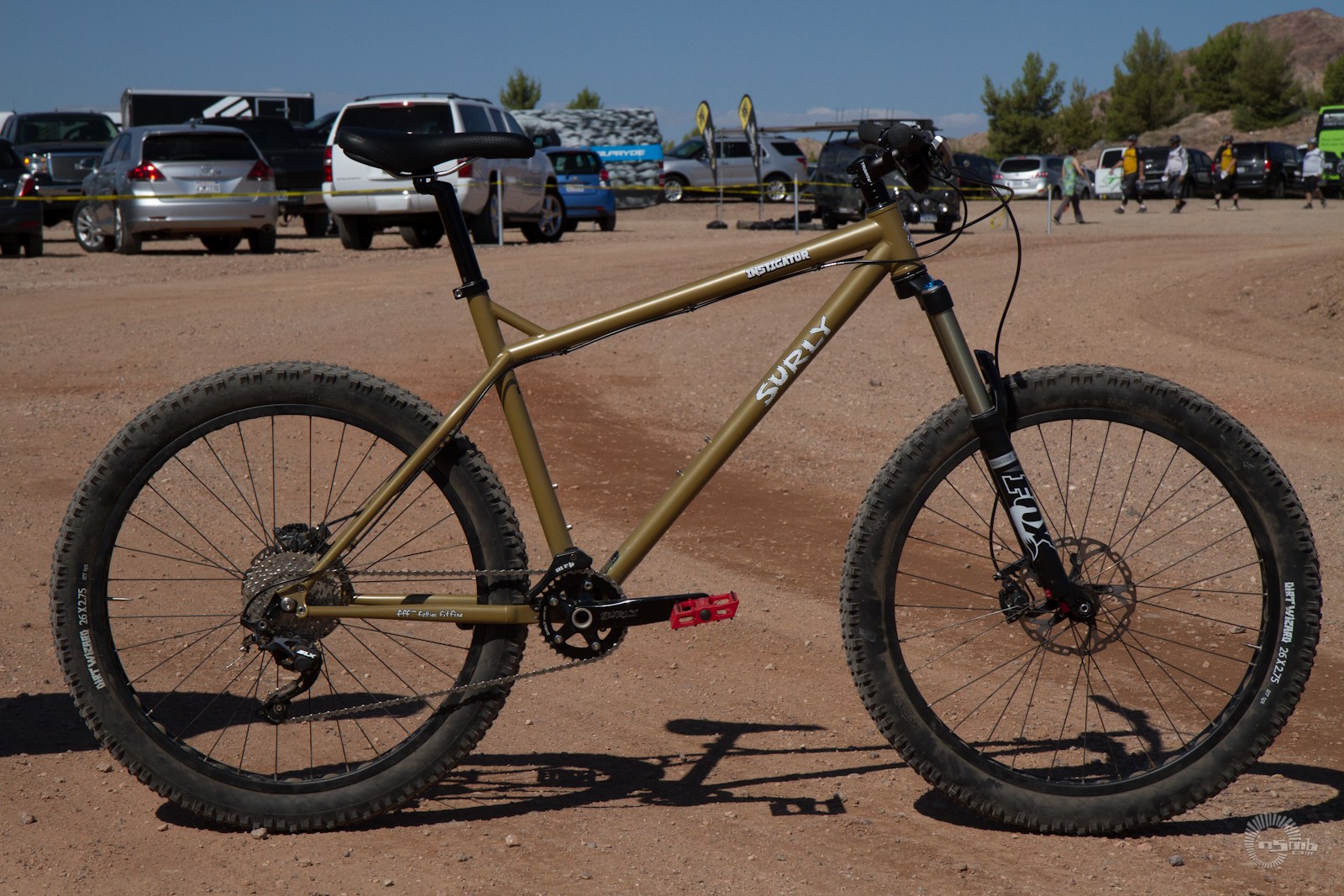 On its own it looks quirky, but as a Surly it looks downright conventional. The seat tube brace is a shame, but no one will accuse this frame of being a noodle.

My ride was brief but my curiosity is fully piqued now. It’s hard to know if there would be room in the stable for a fat bike or if it would remain a novelty ride for a few snow rides per year, but I’m willing to put a few rides in to find out. The amount of traction provided by the large tires (that are in fact some of the smallest Surly makes) was outstanding in the loose corners we were riding and while it doesn’t fly out of corners, the carving sensation is a blast – more like smooshing a fat ski in loose snow than carving on hard pack – and I liked it. 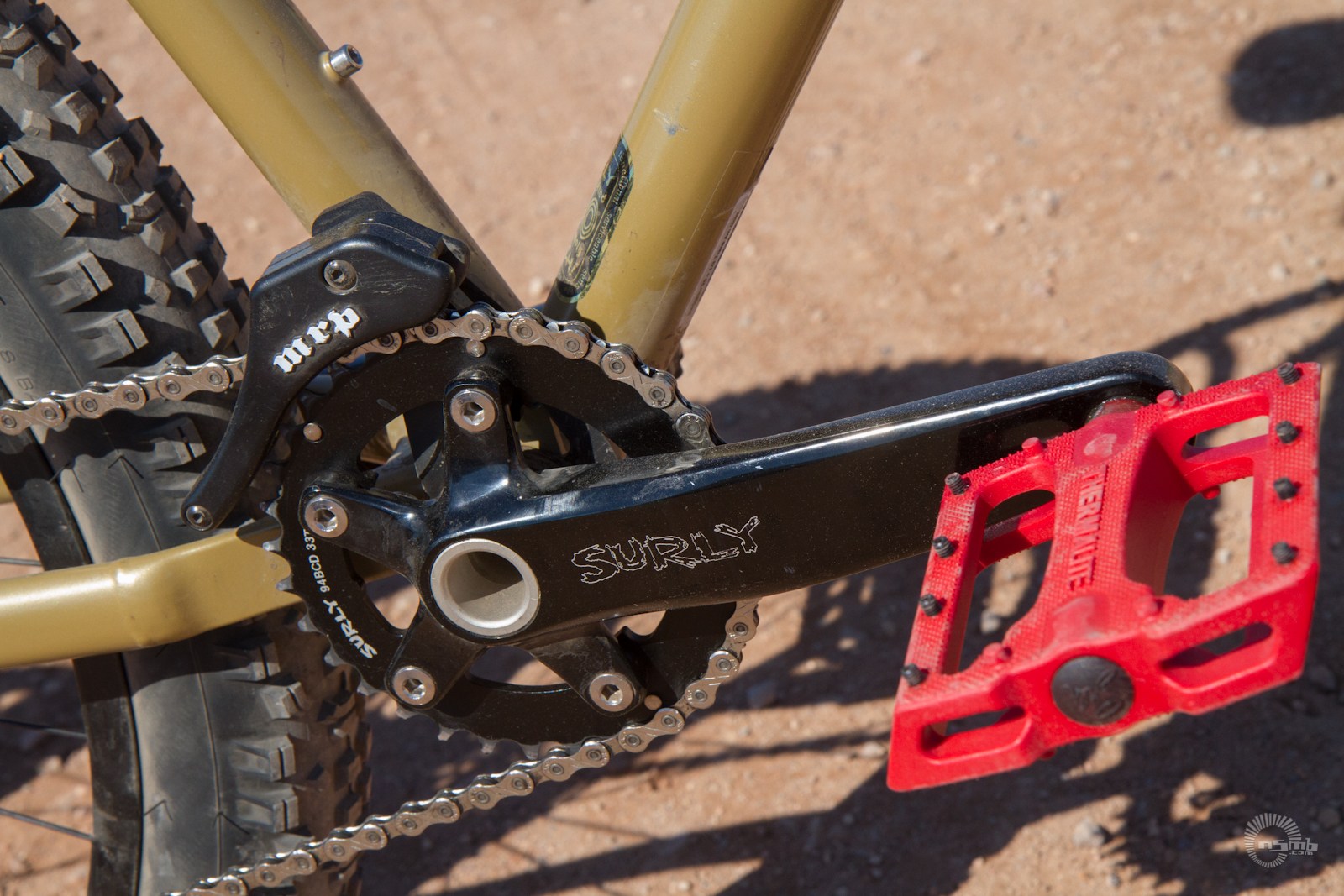 The MRP 1x guide gives a clue about the intended use of the Instigator (riding like a hooligan), however despite its ‘small’ fat bike tires, you still feel the weight when accelerating or climbing, so your local terrain may demand an extra chainring or lower gearing on the cassette. 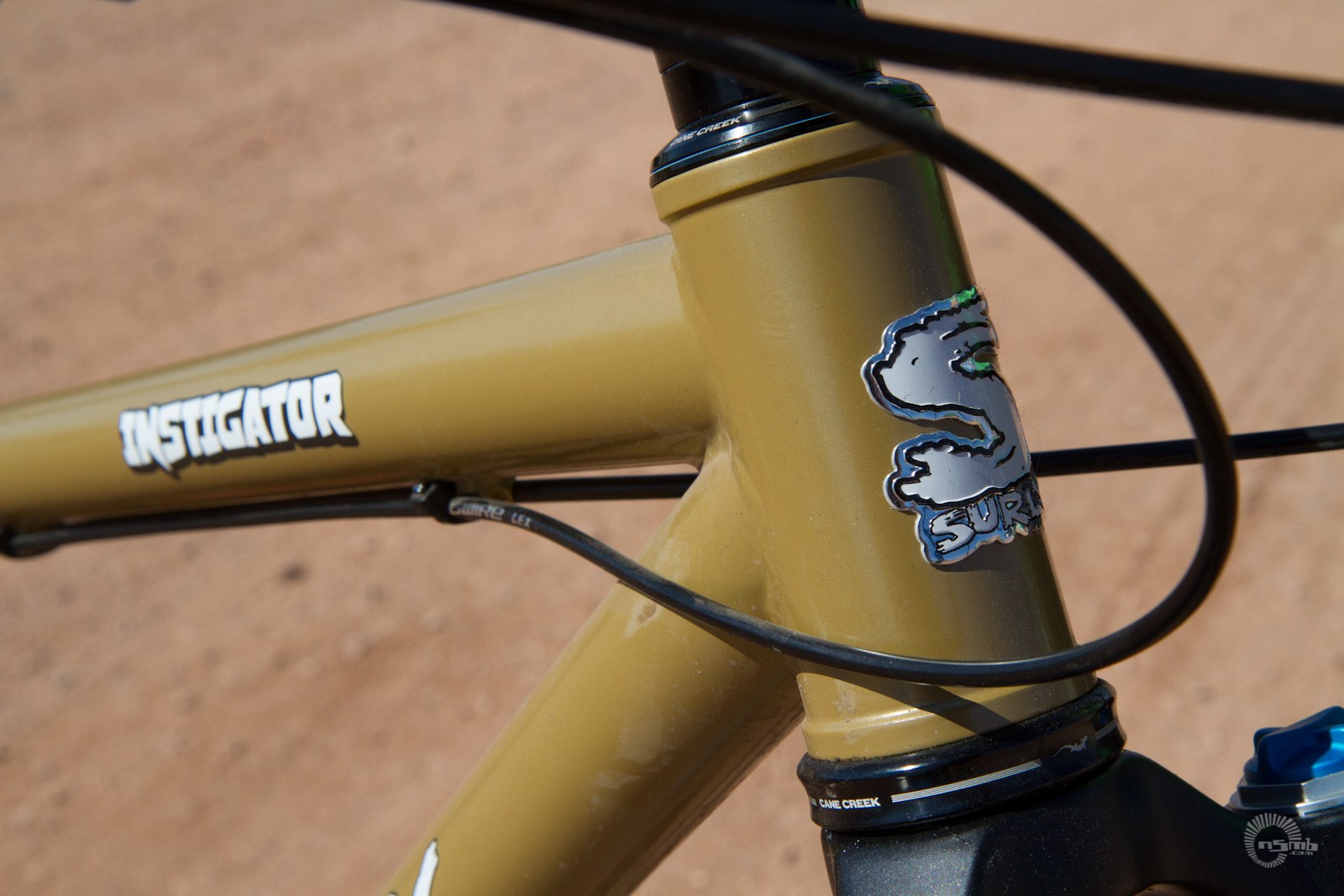 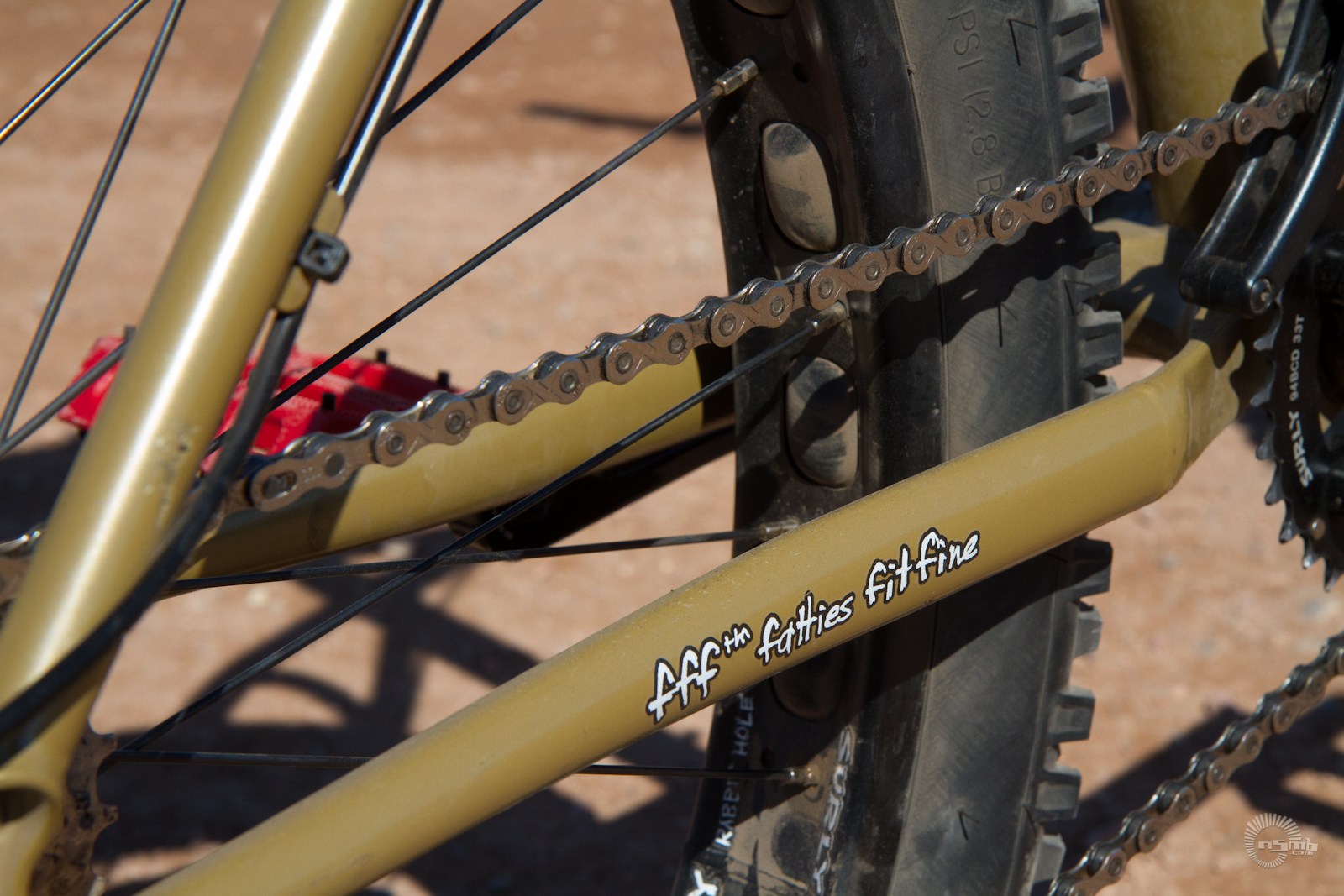 Those chubby chasers at Surly are an inclusive bunch. The Rabbit Hole rims have a 50mm width and when combined with the Dirt Wizard tires, you get a huge contact patch and great traction in loose corners and when braking.

Whatever your take on fatties, Surly is committed. They have invested in multiple tire molds, rim tooling, and lots of different frame designs and it’s capturing some riders’ imaginations. Maybe it doesn’t fit your riding style or sense of style but that’s no reason not to give one a pedal and re-connect with your inner hooligan. 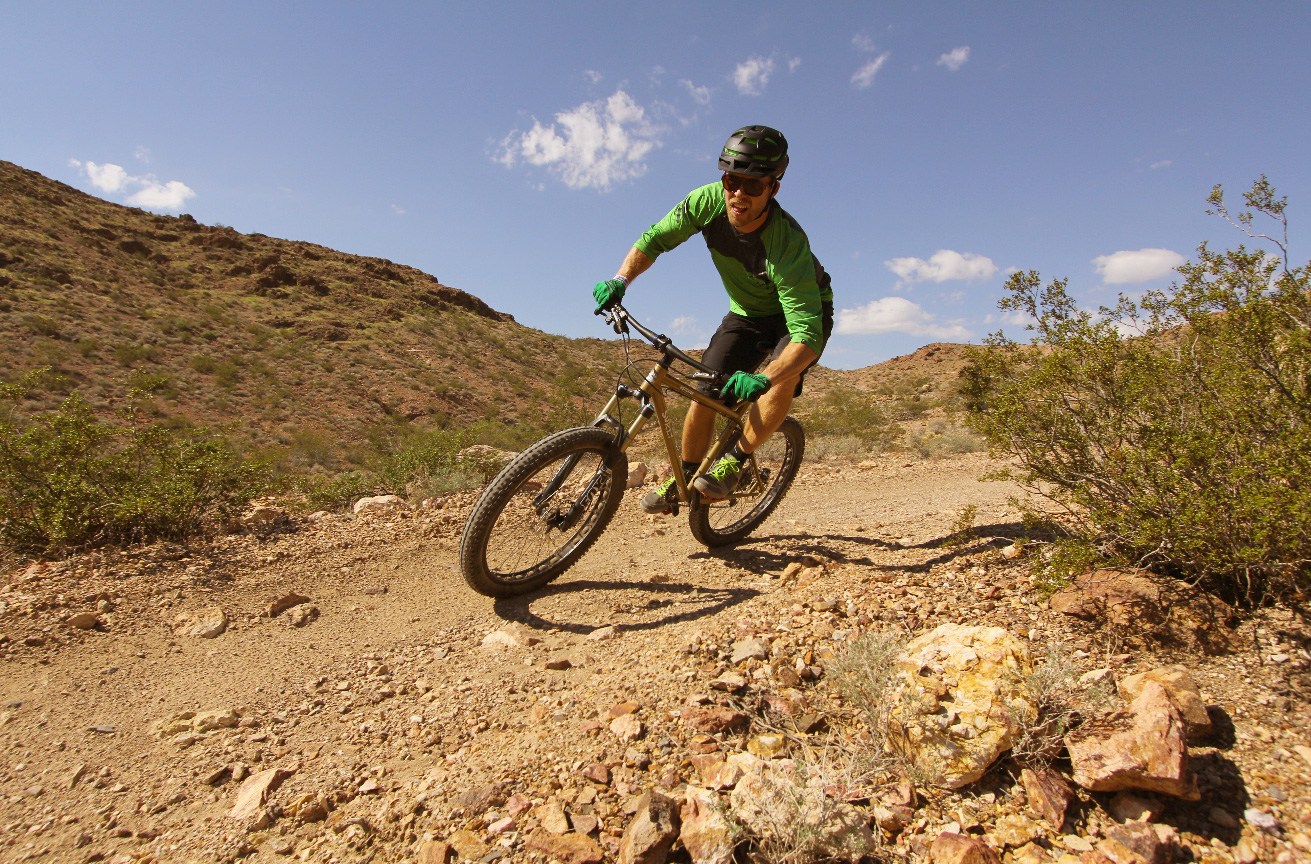 It is confidence inspiring to have all that extra rubber underneath you but it won’t make you feel like a racer – except that’s the whole point of these fat bikes in the first place. Photo Cam McRae.

There is a contingent out there that wants to ride fat bikes all the time – not just in the sand and snow for which they were first designed. And something about that appeals to me, because they’re not the fastest bikes but some people think they’re more fun, and those people tend to be fun people, too. Or at least the kind that will bring good beer to your house if you invite them over.

Uhhmmm, the Instigator is NOT a fat bike.

The 120tpi versions of those tires are quite light, too - 820g or something like that?

Morgan knows fully well my interest/knowledge about this bike. I had been awaiting anxiously info on the second coming of the Instigator.

I think it's a pretty versatile bike. The fat 26er tires means you can easily put a "normal" 650b wheelset on there for summer use or faster rides, or as a primary wheelset. The relatively high BB means you can run normal size 26″ rubber too without it being too awkward. The geo is awesome - slack and with a short rear end.

I'd use it for urban rides, winter trail rides, slow XC rides, and bikepacking. And the nice thing about a Surly is it's kind of timeless, which is something not common in today's MTB world. An abused 5 year old Surly is cooler than a new Surly.