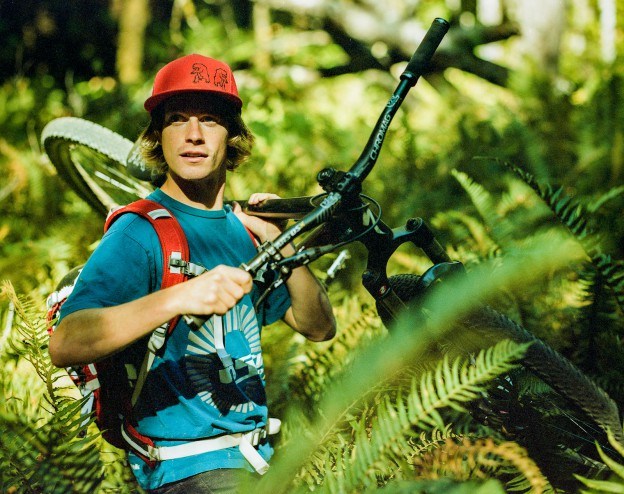 Mark Matthews trekking though the fern forest in search of an old jump line.

Sometime last year I started exploring the world of film photography. I really enjoyed the slower, more deliberate pace of shooting film. No longer could I burst fire a sequence of 10 shots, and then select the best one afterward. No longer could I instantly see the shot I just took, and decide whether to take another. In fact, there are plenty more limitations that come with shooting film, both in the still and movie varieties. As it turns out though, these same limitations are part of the reason shooting film is both so exciting and challenging.

There’s a certain feeling or nostalgia that film evokes, and I feel that’s especially true with Super 8mm. While it’s relatively low in quality, it’s high in style, and that’s what counts. If you really think about it, any media, whether music, photography, or film, isn’t so much about what you’re seeing and hearing, but rather what you’re feeling.

Mark Matthews echoes my sentiments: “We have aimed to capture the essence of riding and create the catalyst that reminds us about the fun and relaxed vibe mountain biking provides. Logging banger riding shots and pushing my riding wasn’t exactly a goal of mine for this project – and it also wasn’t really an option. Our total inventory consisted of one Canon 310XL Super 8 mm camera and two Kodak Ektachrome 100D film cartridges. Almost every single riding clip got used in the final edit (meaning everything was shot first try). The outcome of these shots was a big mystery as well, how each clip turned out was to be determined.”

When I approached Mark with the unique idea of shooting an edit in Super 8mm, he was immediately onboard. However, it wasn’t until we started looking at old Super 8 surfing and skateboarding films that we really understood how our edit would look and feel. There was something about the film footage we were watching that we had never seen in mountain biking. I figure mountain biking is such a young sport that it missed out on the era where people shot with amateur film. So in making this edit Mark and I hoped to capture the fun, carefree feeling of a grainy old surf film, or ski film, or skate film…. except in this case it would be something for our own community, something for all the riders out there to appreciate. 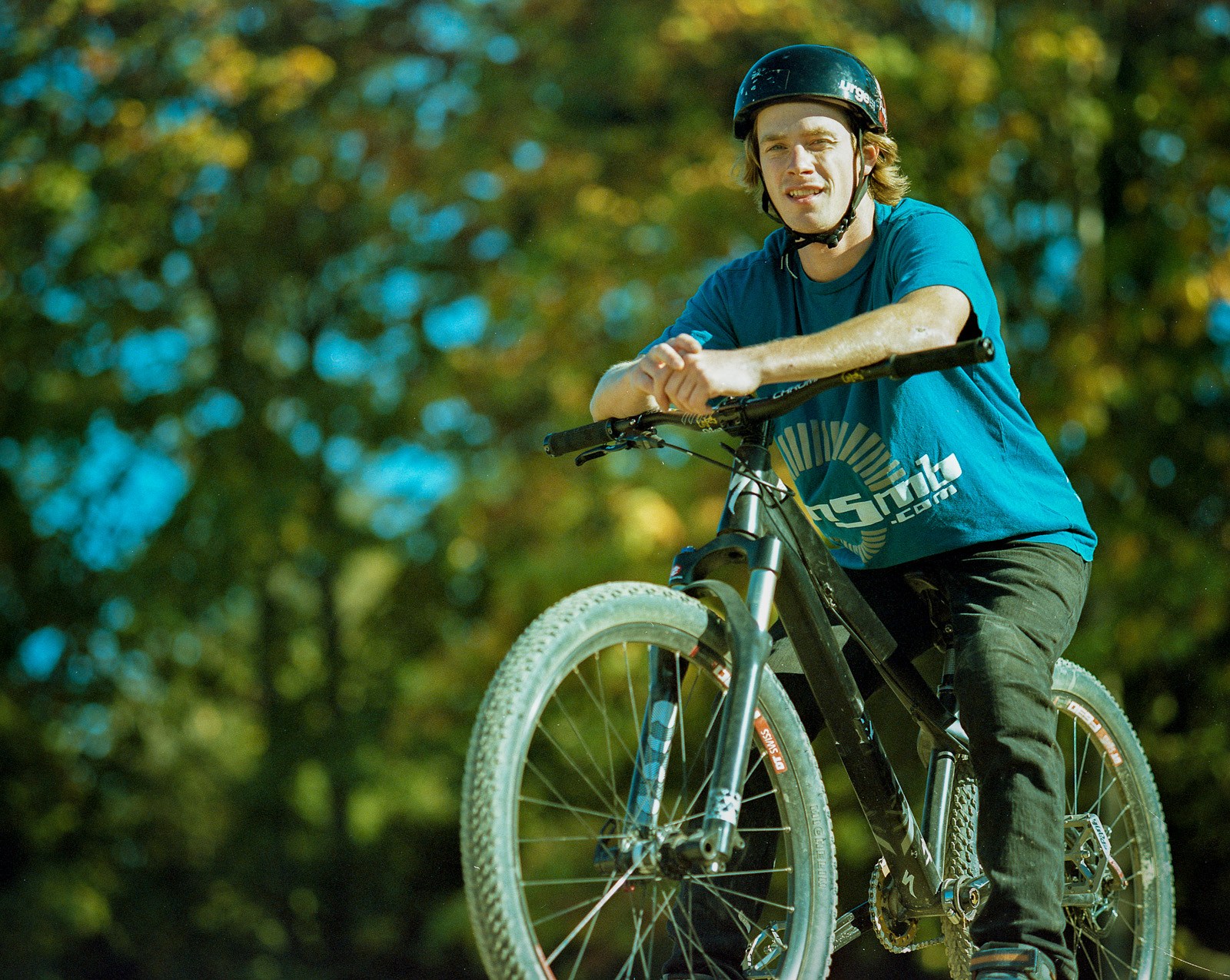 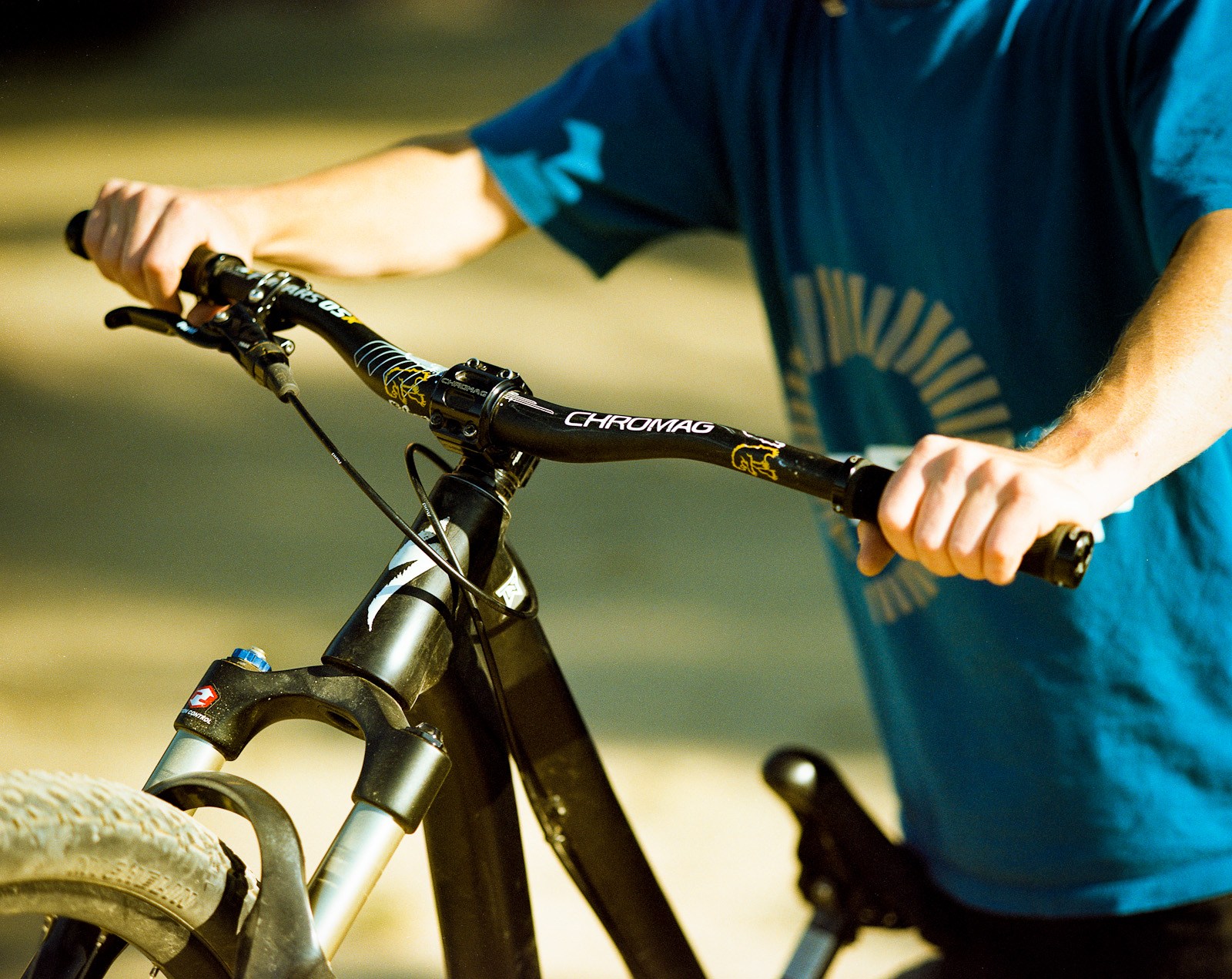 In September, we began our shooting this film – often on Saturdays. It quickly became apparent that our biggest challenge would be making the most of our limited film supply. We had two 50′ cartridges of Kodak Ektachrome, which would each yield approximately 3 minutes of footage. It was both stressful and exciting trying to make every shot count.

Mark would attempt to get tricks and riding dialed first try, and I would do my best to not only capture them, but limit the amount of film wasted on the lead-in and run-out of his lines. It was a very foreign feeling to have shot some amazing tricks, yet not be able to play them back immediately and check how they looked. Did I frame it right? Was it properly exposed? Was it in focus? Heck, I wasn’t even sure the Canon 310XL I was using worked, aside from the fact that you could hear the motor running. It would be weeks before we could find out. When we did finally exhaust the last of the Super 8 film it was humbling to know that, for better or for worse, we were finished shooting. We had created all the footage we could make in 100′ of film. There were no retries, no deleting and filming again. 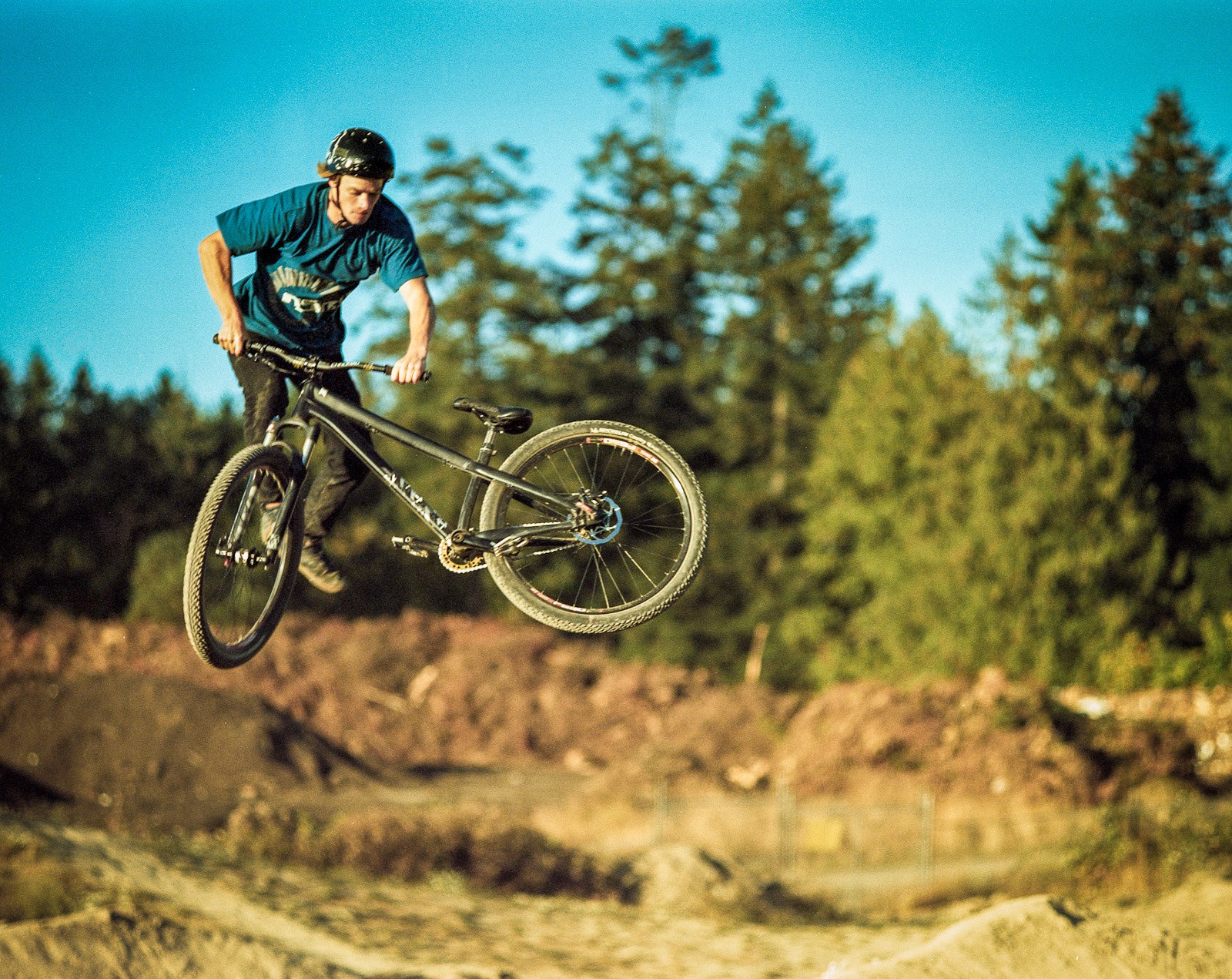 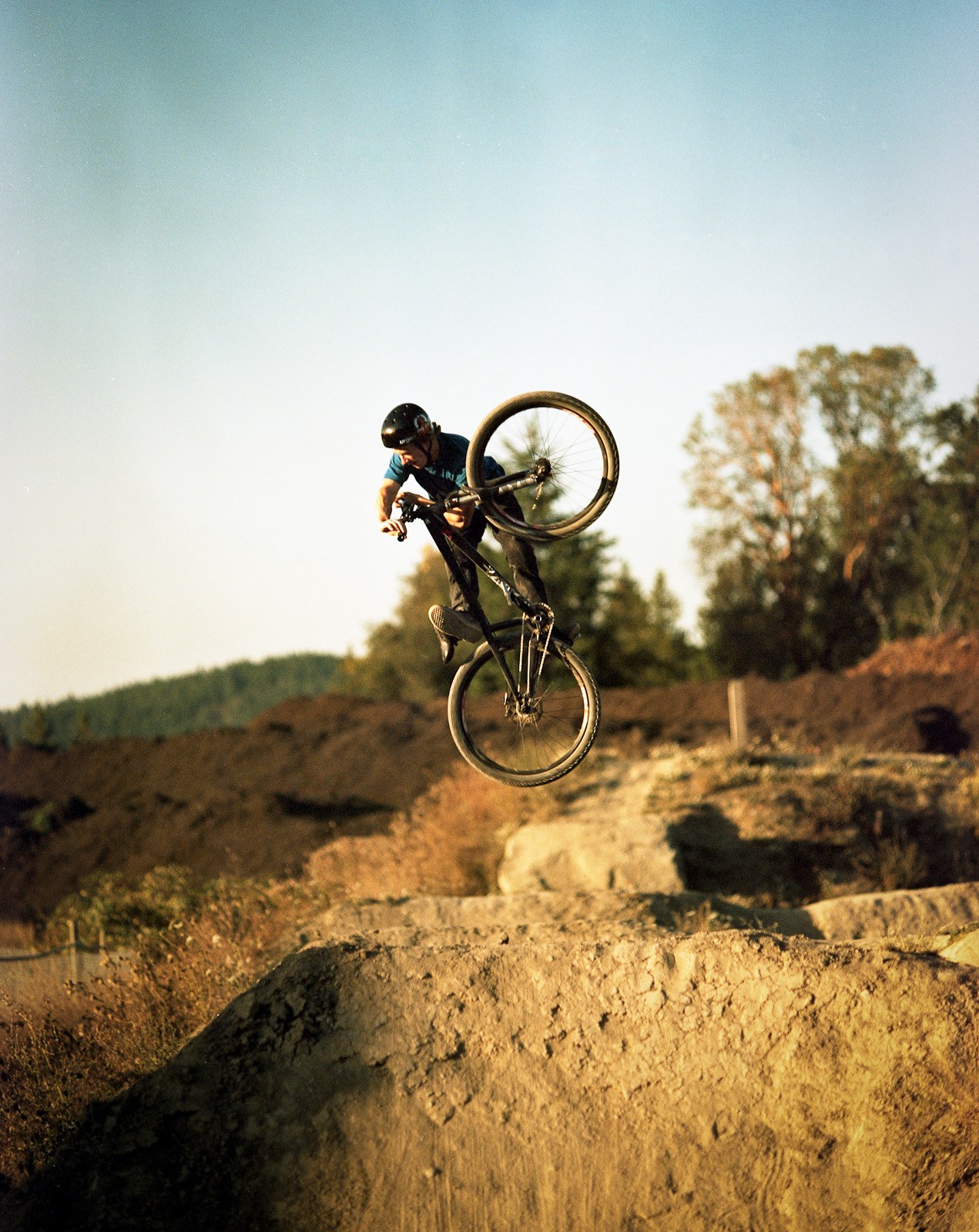 The exposed film cartridges were soon mailed to Niagara Custom Lab in Toronto, where they processed the film then mailed them back. Mark and I eventually tracked down a Super 8 projector (thanks Camera Traders) and for the first time saw the results of our hard work projected in a dark room. I can’t remember how many times we rewound and re-watched that film reel, but we were blown away by the colour and style of the footage. It looked just like we had envisioned, and we knew that in order to truly showcase the detail of the film stock, we would need to get a high definition scan made for our edit.

Again our film was mailed off, this time to the Okanagan, and with it I packed a hard drive. We sent it to Oliver at Newsreel Productions, where it was scanned frame by frame (all 6,480 of them). When the film arrived back with hard drive full of digitized footage, Mark and I sat down and jointly edited the video. After about 8 hours of tweaking and editing, we had our final cut. Our diligence with the film had paid off, and we ended up with a heroic shooting ratio of 3:2 (for every 3 minutes of footage shot, 2 minutes are in the final cut). 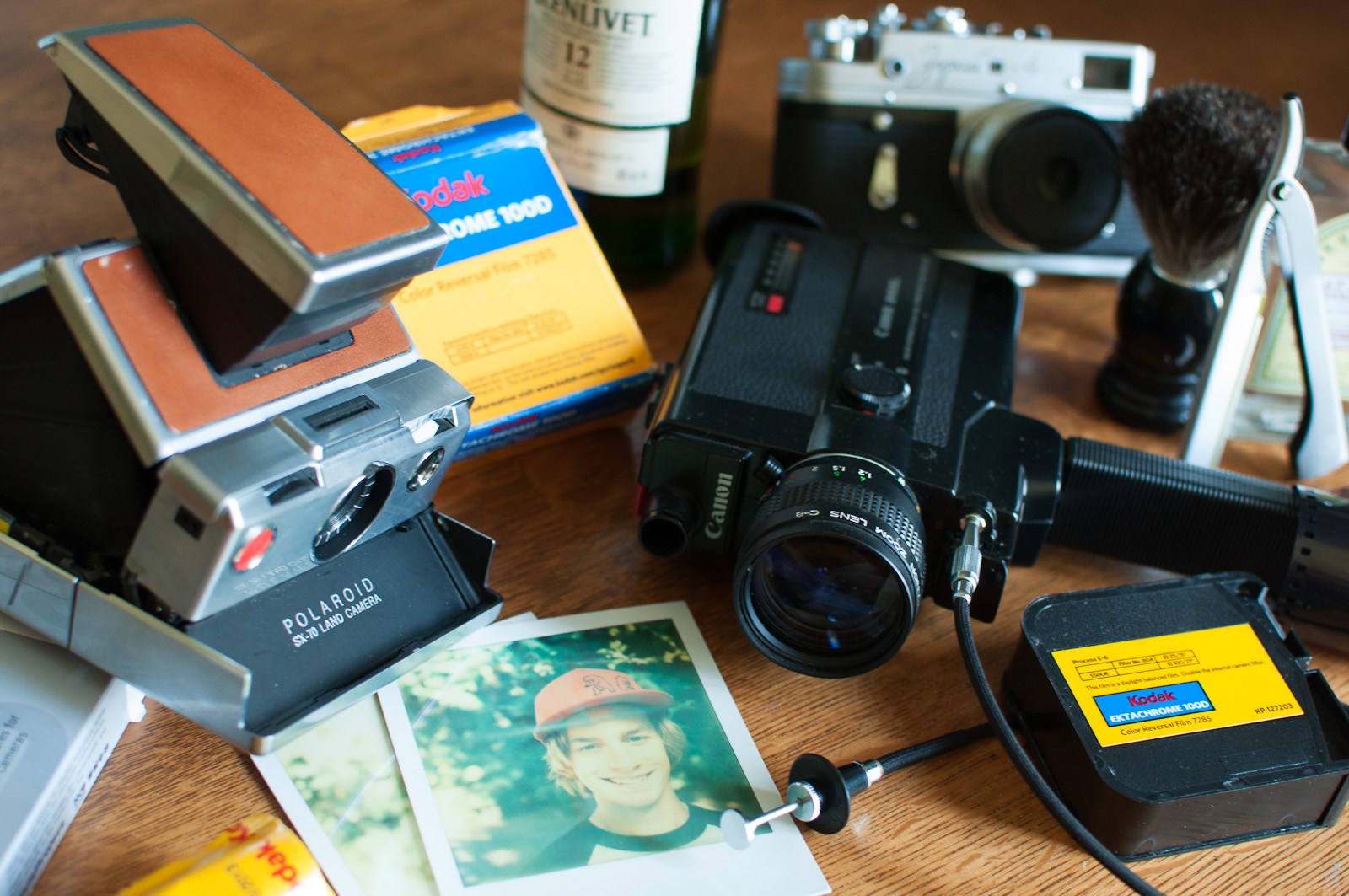 Pieces of Our Time Machine. 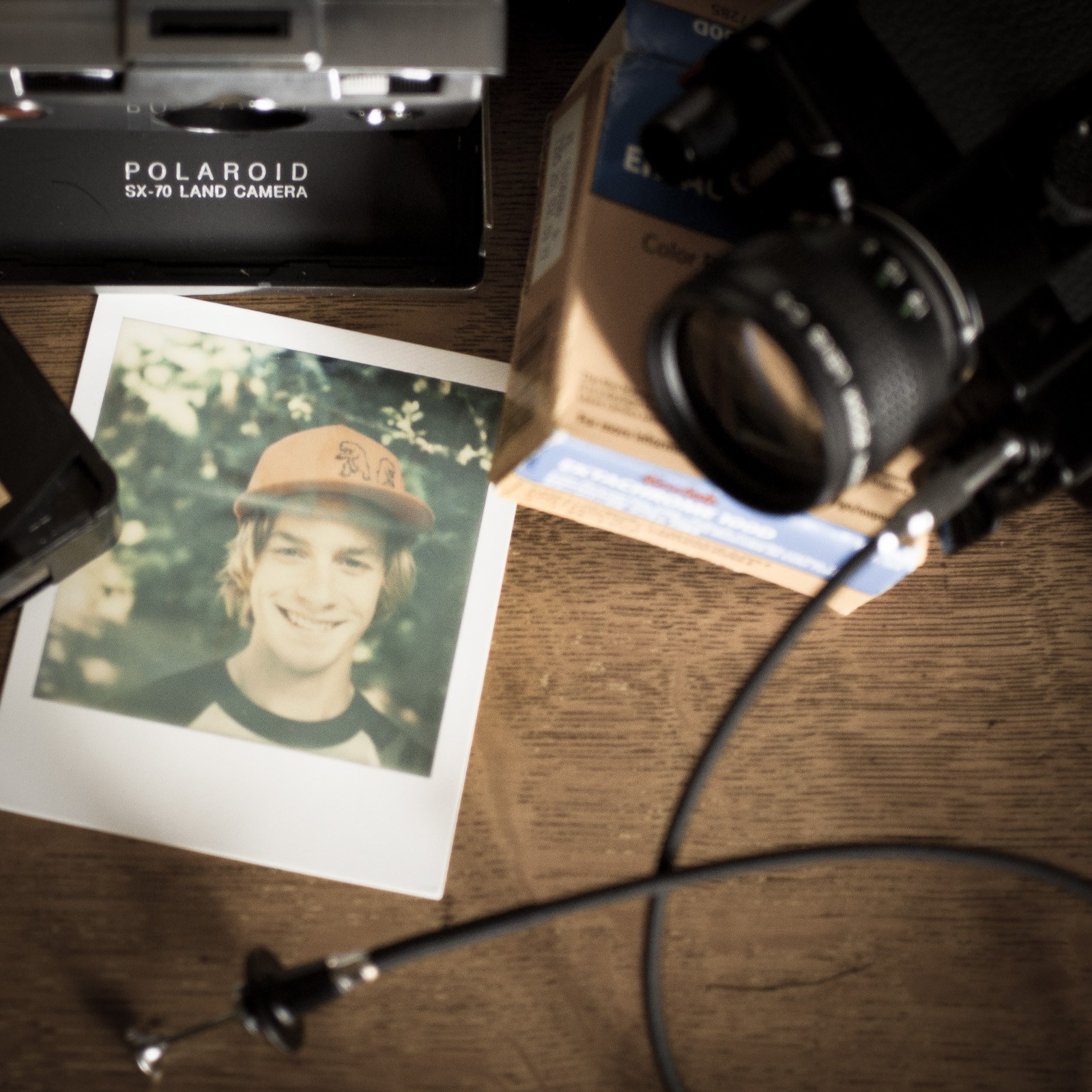 The film captures exactly what we had sought out to do: create a stylish edit that captures the fun of mountain biking on an old school medium.

Hope you enjoy it. 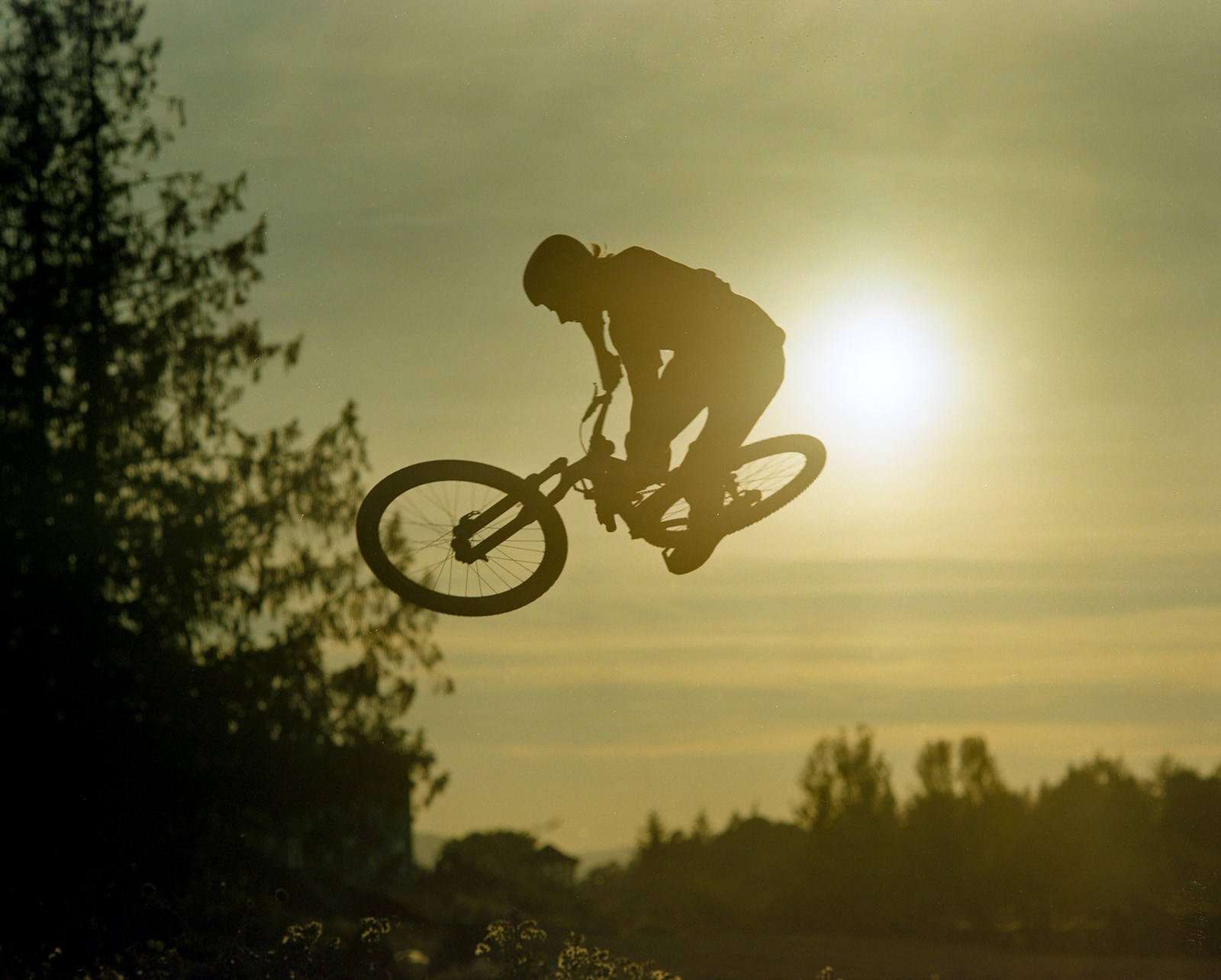 Very well done, from nailing the riding and shooting without tons of do-overs, to the music selection, everything. The intended effect was certainly felt. It will stand out from just about every other piece of riding footage that was released this year, that's for sure.

One of the coolest bike vids I've seen recently! That film style gave me that nostalgic feeling of looking back to my memories of all the great times I've had on a bicycle; as if someone was secretly filming it and I had discovered the tape in a time capsule.

Please, please enter this into outdoor like film fests.

That was really cool. worth the effort! Nice work.

Very interesting to watch. That must have been a fun challenge.

Yea mark! thats super cool. looks like you put a bunch of work into it. It turned out really well. a little too well haha. miss ya bud

This video was awesome Mark! It's really nice to see something different and creative.

I've always said that filming my first movie on 16mm (The Pedal Files with Cory and Ambrose) was the ultimate film school. You learn efficiency and accuracy pretty quickly when you have 100ft/3-minute reels, and no budget to buy more!

Well done. Super8 is a fantastic format. I remember shooting super8 back when people rode super8's on my old Canon 518! I still have a few old hammer fests and KY jump sessions on 50 footers kicking around here somewhere. Also props to Oliver at Newsreel Productions, a good friend and really his product is top notch. One of the big parts of the experience for me with super8 was the smell. When you crack open a 50 footer there is that unmistakable smell of film that is missing when you pop a card into a DSLR =P

Nice dude that's awesome.. and small world! That's cool you know Oliver he did great work for us. Stoked you enjoyed the edit!