I wrote a little primer on 27.5+ bikes last week, just in case you are wondering what the hell a 6Fattie is. Click the link if you missed it – because the 6Fattie is indeed a bike with 27.5 x 3.0 tires.. Bigger than a conventional mountain bike tire, but smaller than a fat bike tire. I covered some of the hype and misconceptions there so I don’t need to do it here. I will say that, although it’s early, it seems to me these bikes may stick around for awhile. 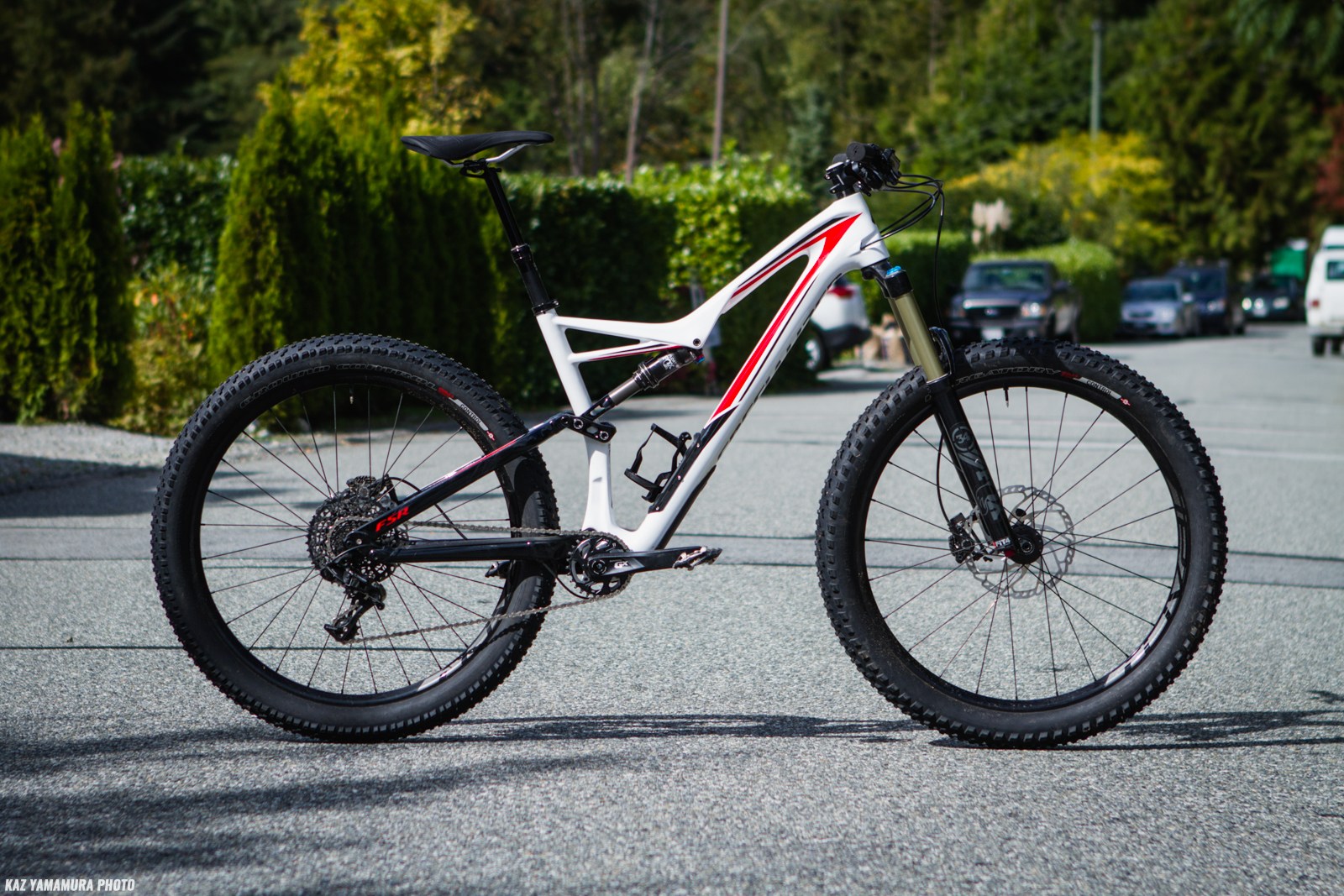 From this angle those tires don’t look too big, and it looks quite a lot like a regular bike, but you’ll know it on the trail.

It’s not surprising that Spesh decided to jump on this wagon early after getting burned by their reluctance to embrace 650b – but these bikes don’t feel cobbled together like an afterthought either. The details are all there and the bike doesn’t miss the mark in any category based on my first few rides. 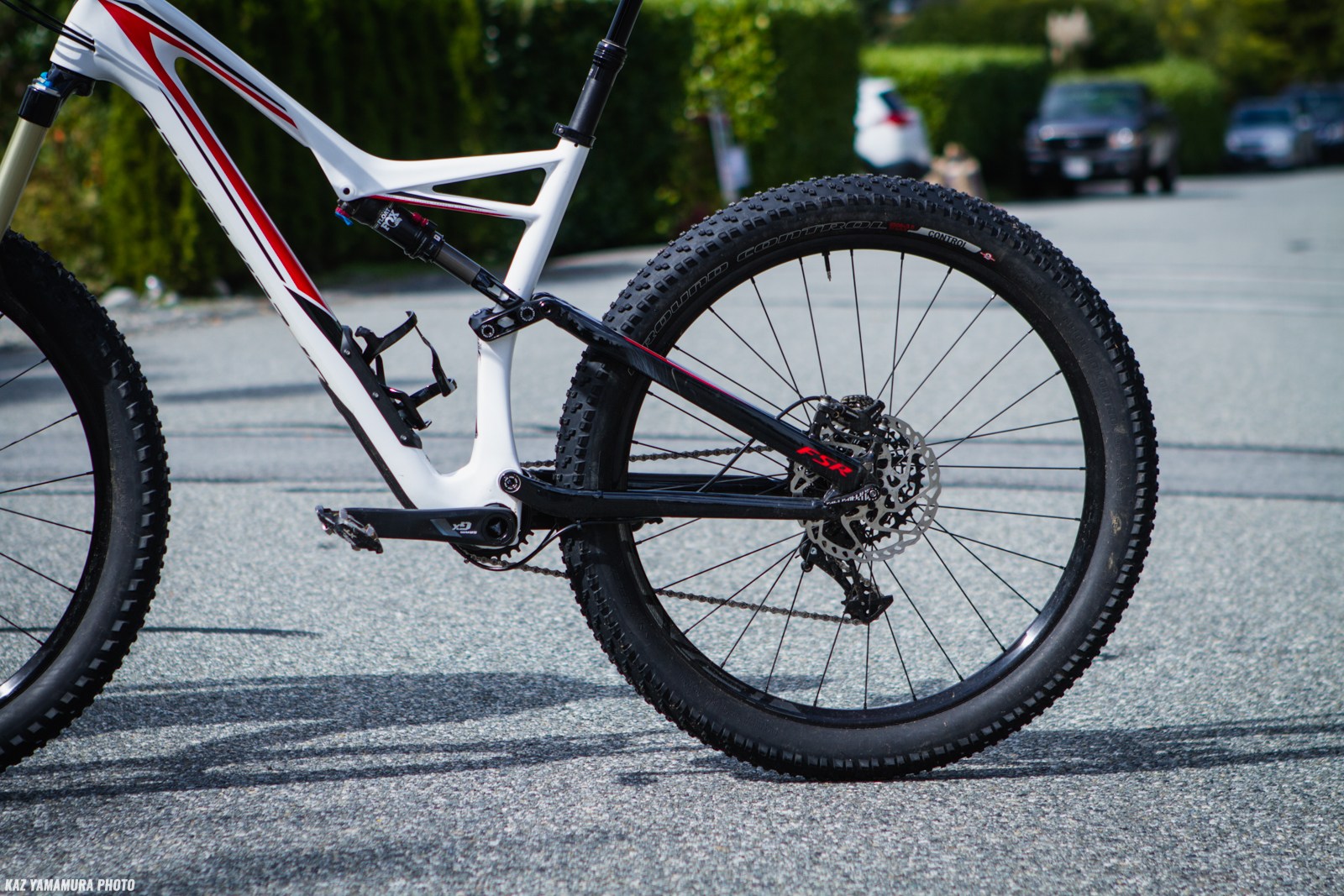 Specialized hasn’t tried to do anything revolutionary with Geo or suspension here. Tried and true FSR Horst Link suspension and a 67 degree head angle make for a bike that feels comfortable from the start. 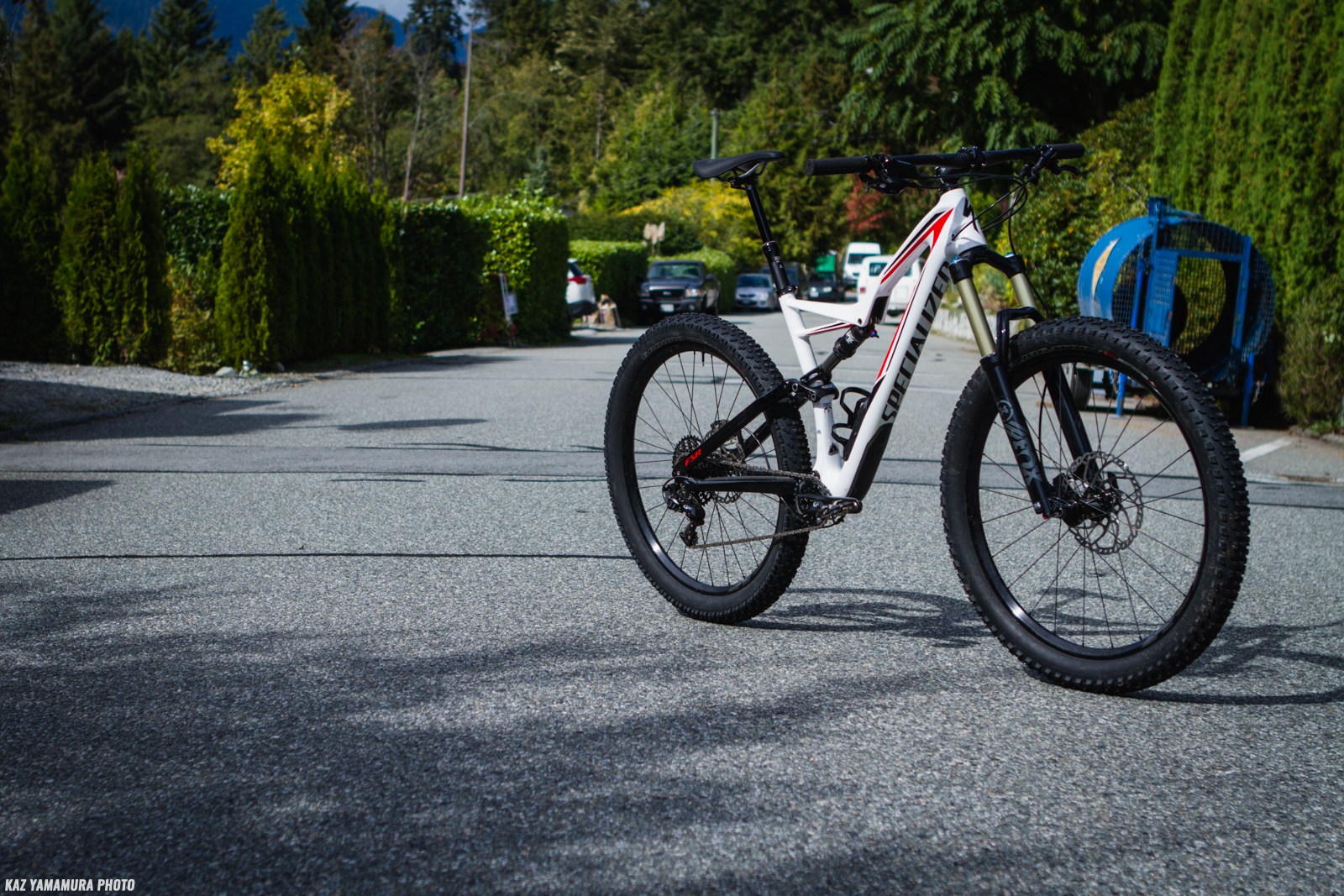 This is a reliable and well-chosen spec. A nice mix of Shimano and SRAM, a Fox 34 fork with 150mm of travel and a Fox Float Performance DPS on the rear to handle the 135mm of rear travel. 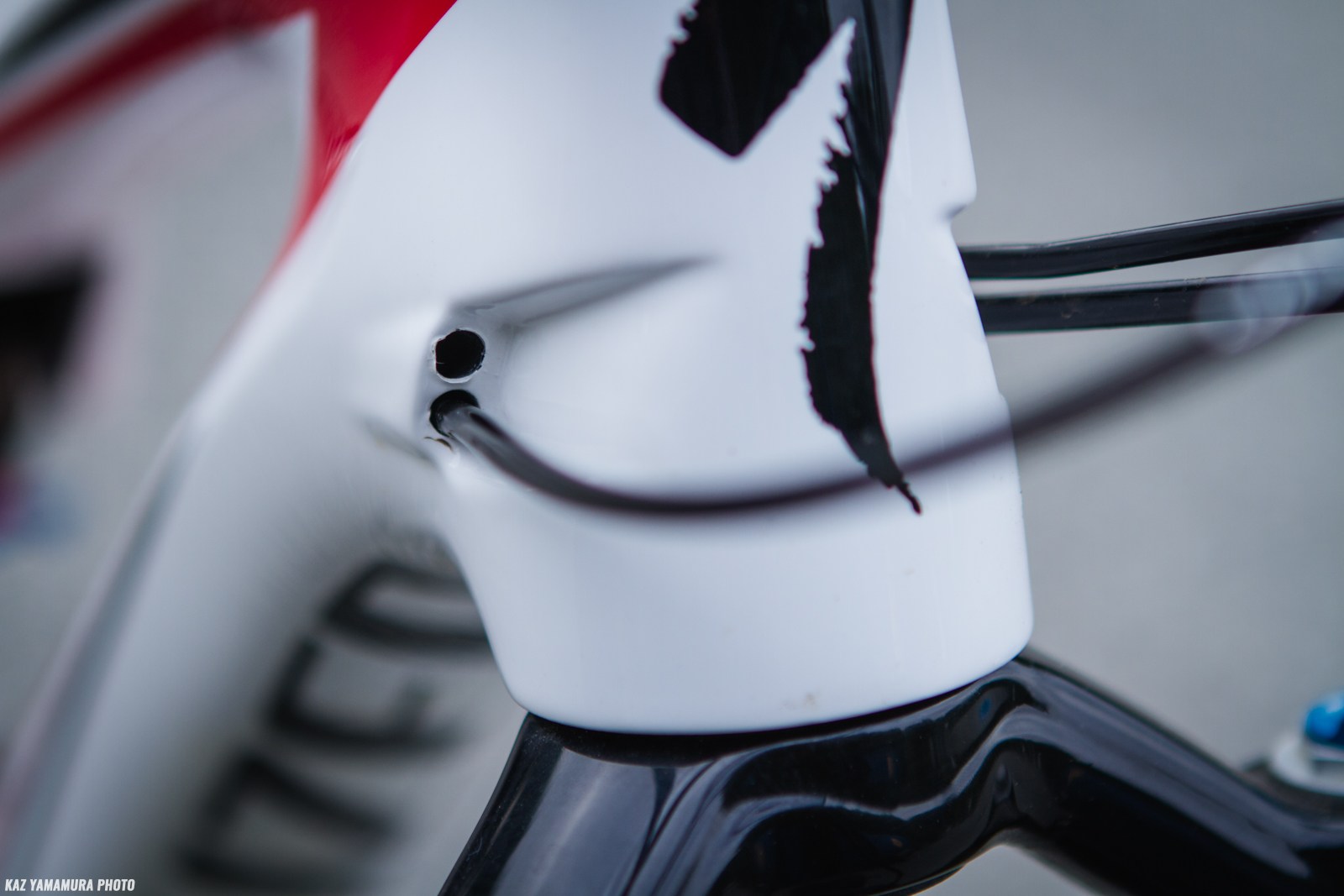 Internal routing. Love it or hate it – it keeps the frame looking clean. 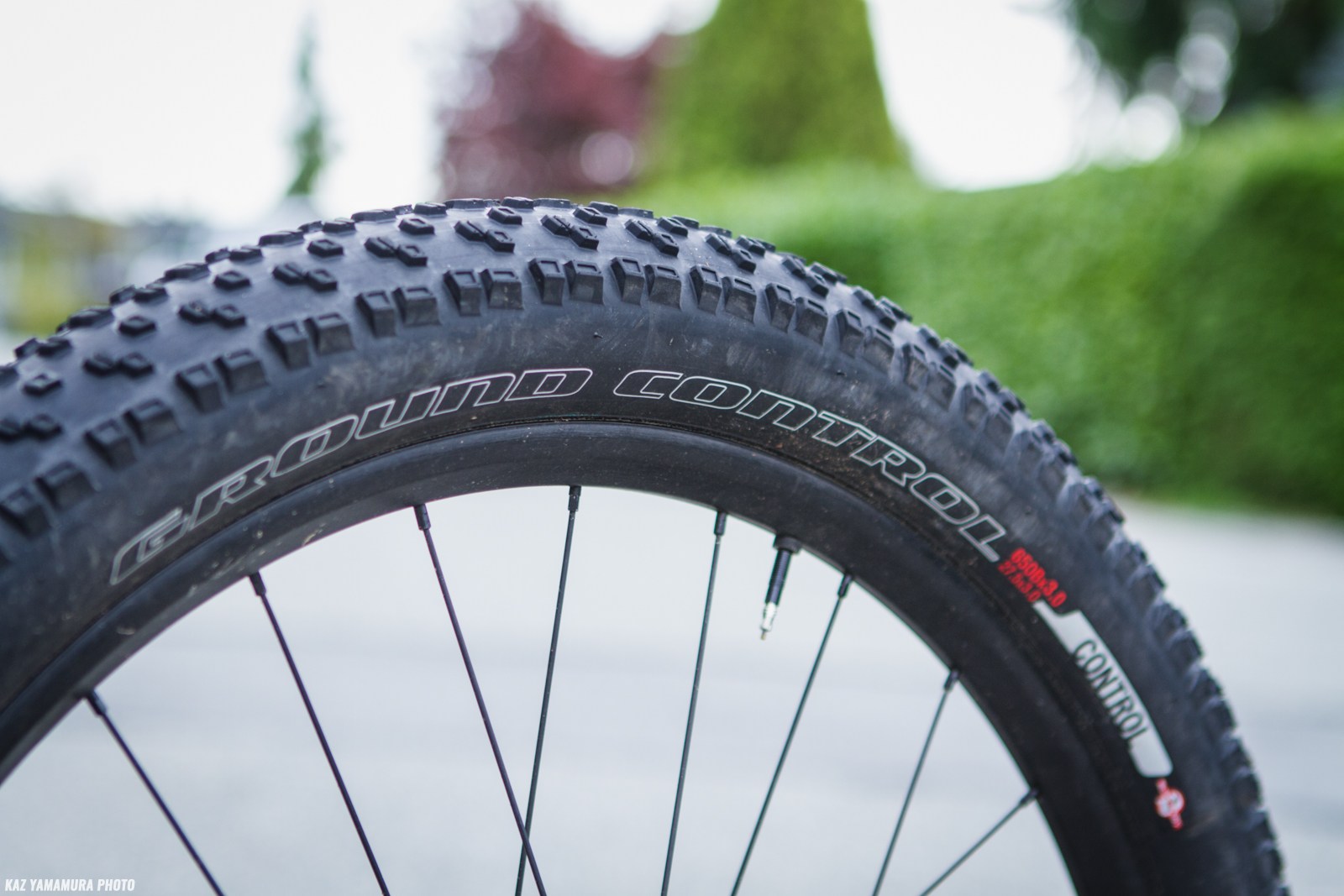 The Ground Control on the rear is similar to most of the first wave of Plus tires, with shallow knobs and modest grip. Of course traction isn’t much of an issue at 15 psi. They weigh in at 1045 grams according to Specialized. Specialized didn’t go for special rims for the 6Fattie – and they are a modest 29mm wide (internal). Specialized named these rims ‘Fattie’ before Plus bikes were on the radar and they were designed for conventional tires. 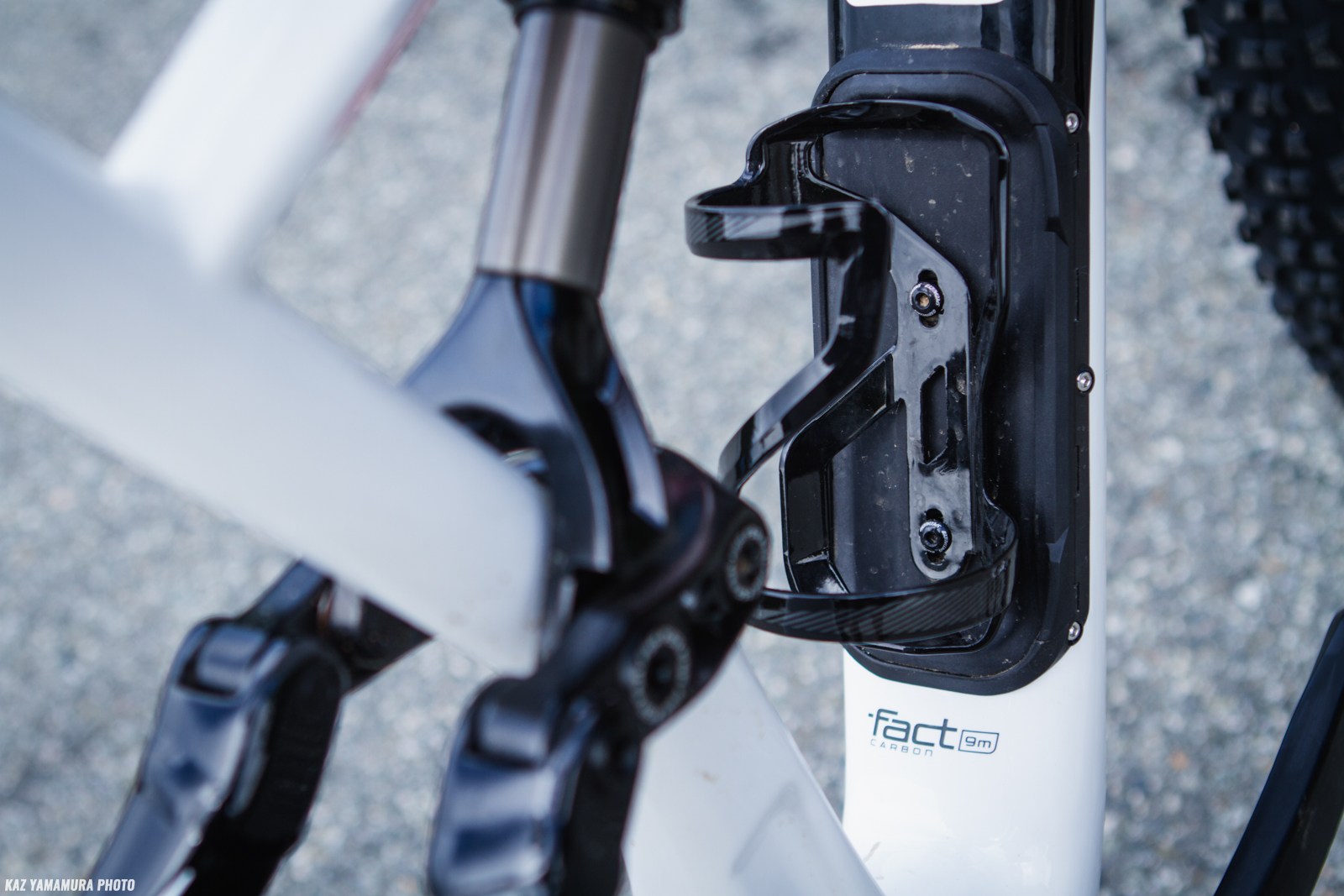 What have we here? The SWAT door? 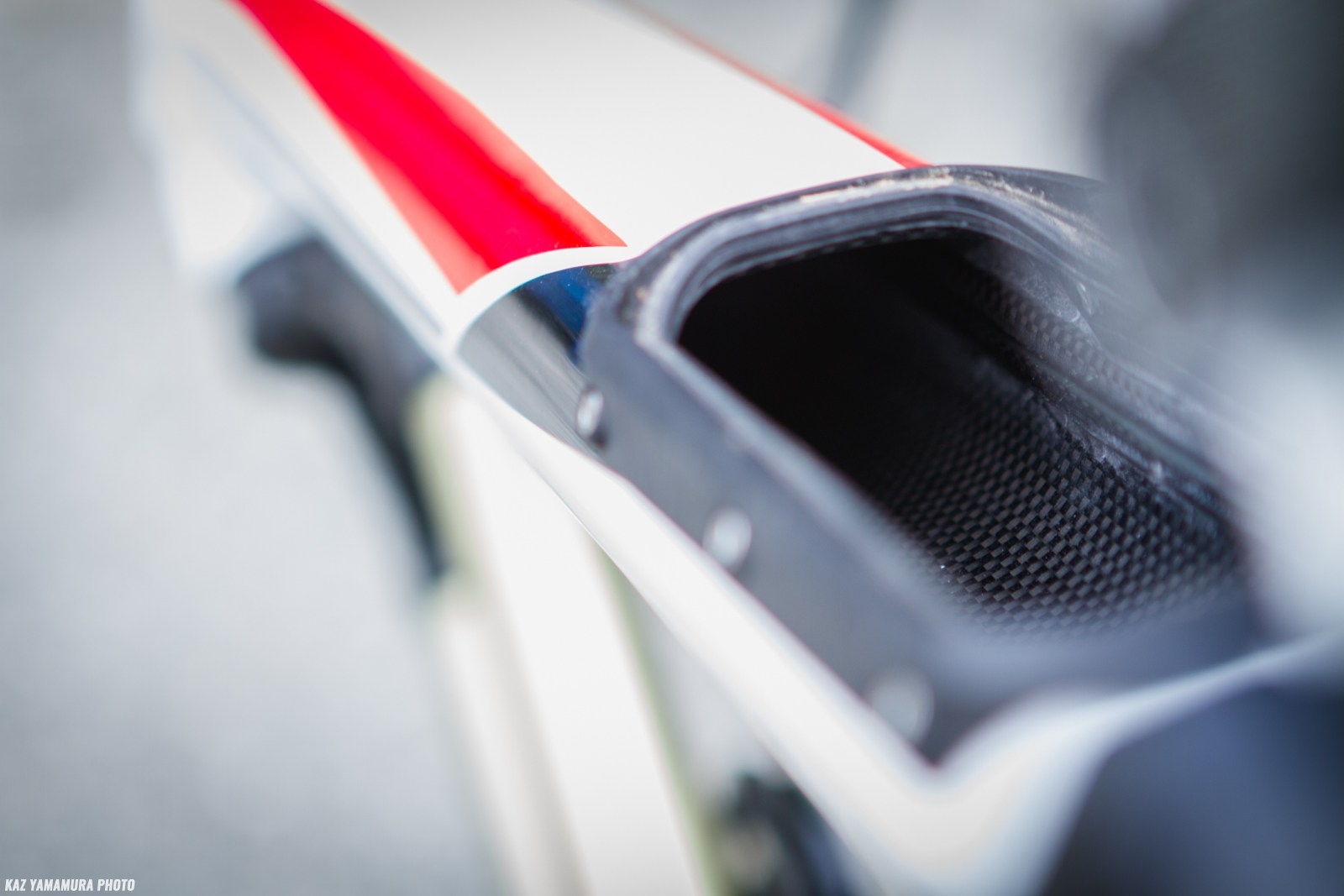 Snap it open and you have room for a foot long sub, a beer or two –  or tubes and tools for the unimaginative. The bike comes with a tube in a pouch inside as well as an empty tool roll. 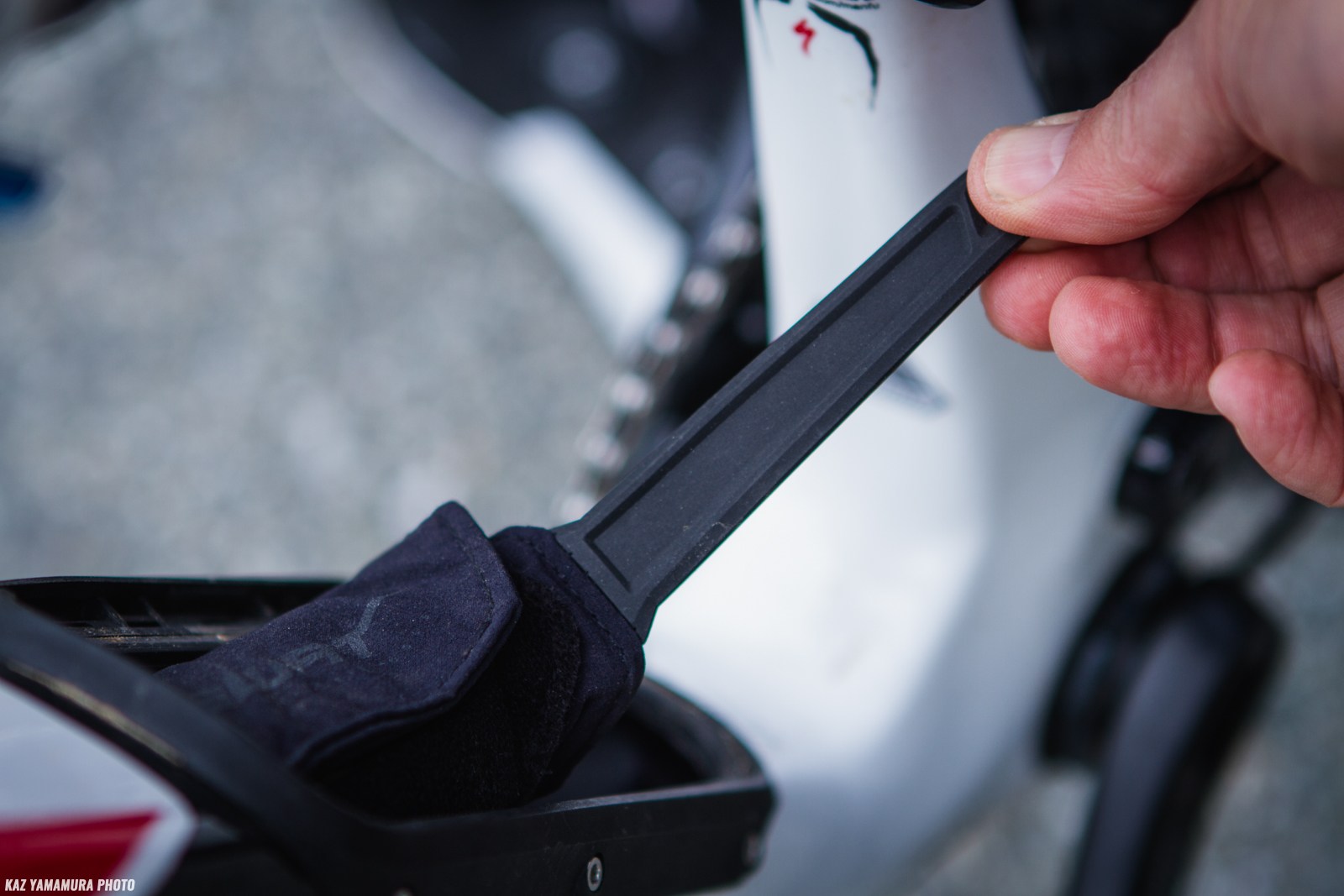 A long tail helps you retrieve your tube. The SWAT door is pure genius. I wish every bike came with one. 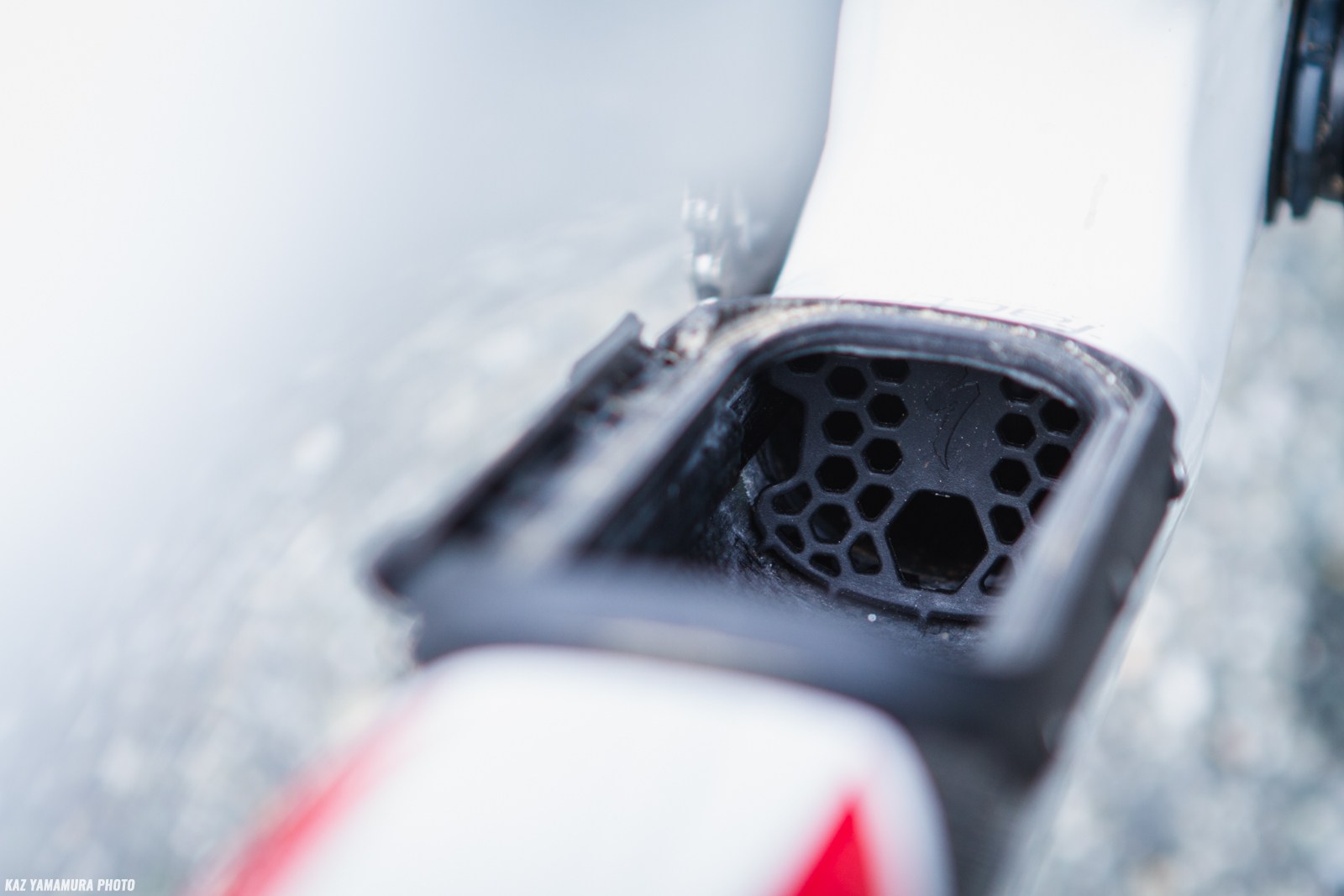 This stopper prevents your cargo from slipping down into your bottom bracket. 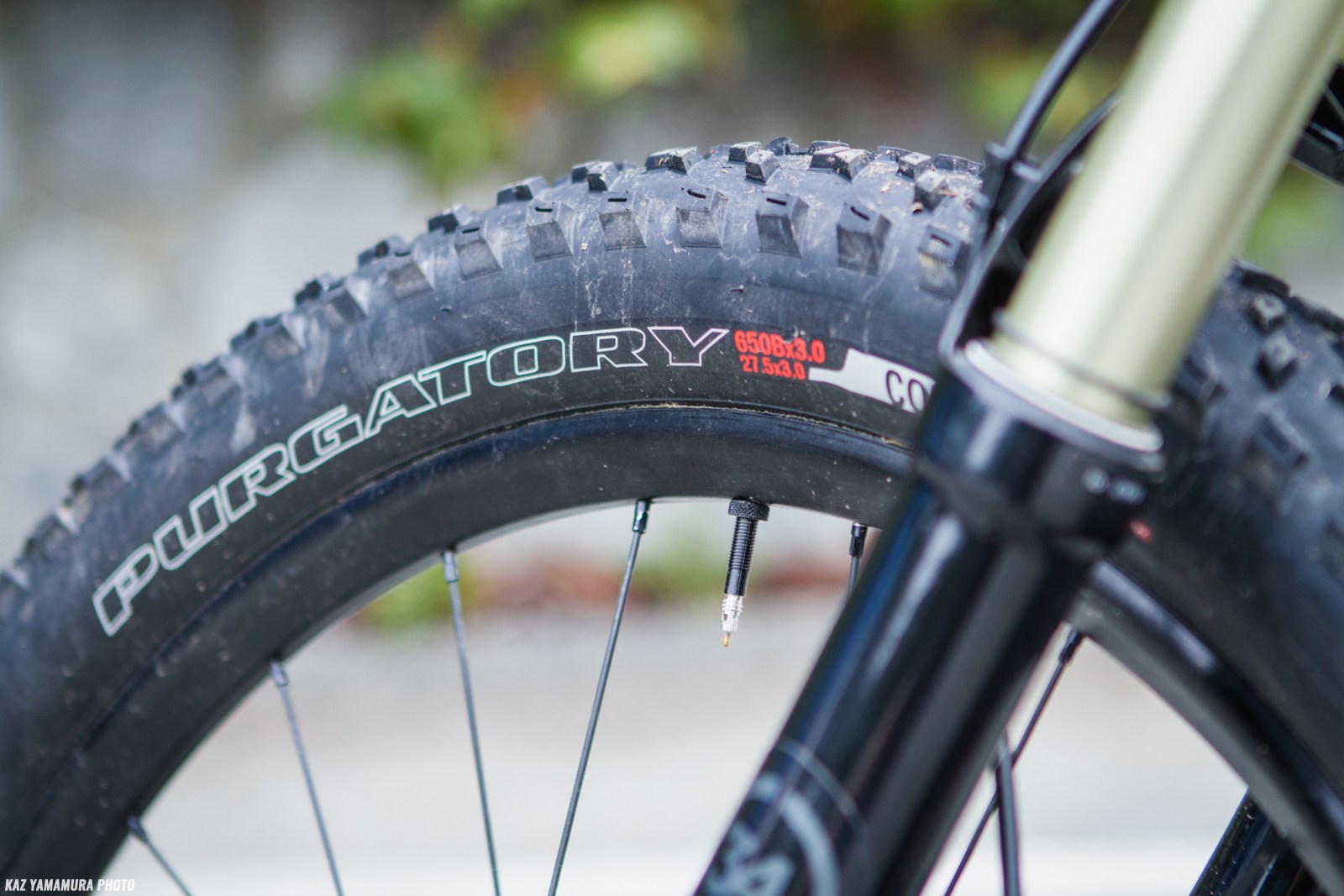 Specialized’s Purgatory 650b x 3.0 up front is a nice aggressive tire that should put many riders at ease. Weight is listed as 980 grams. It seems well-suited to burly terrain. 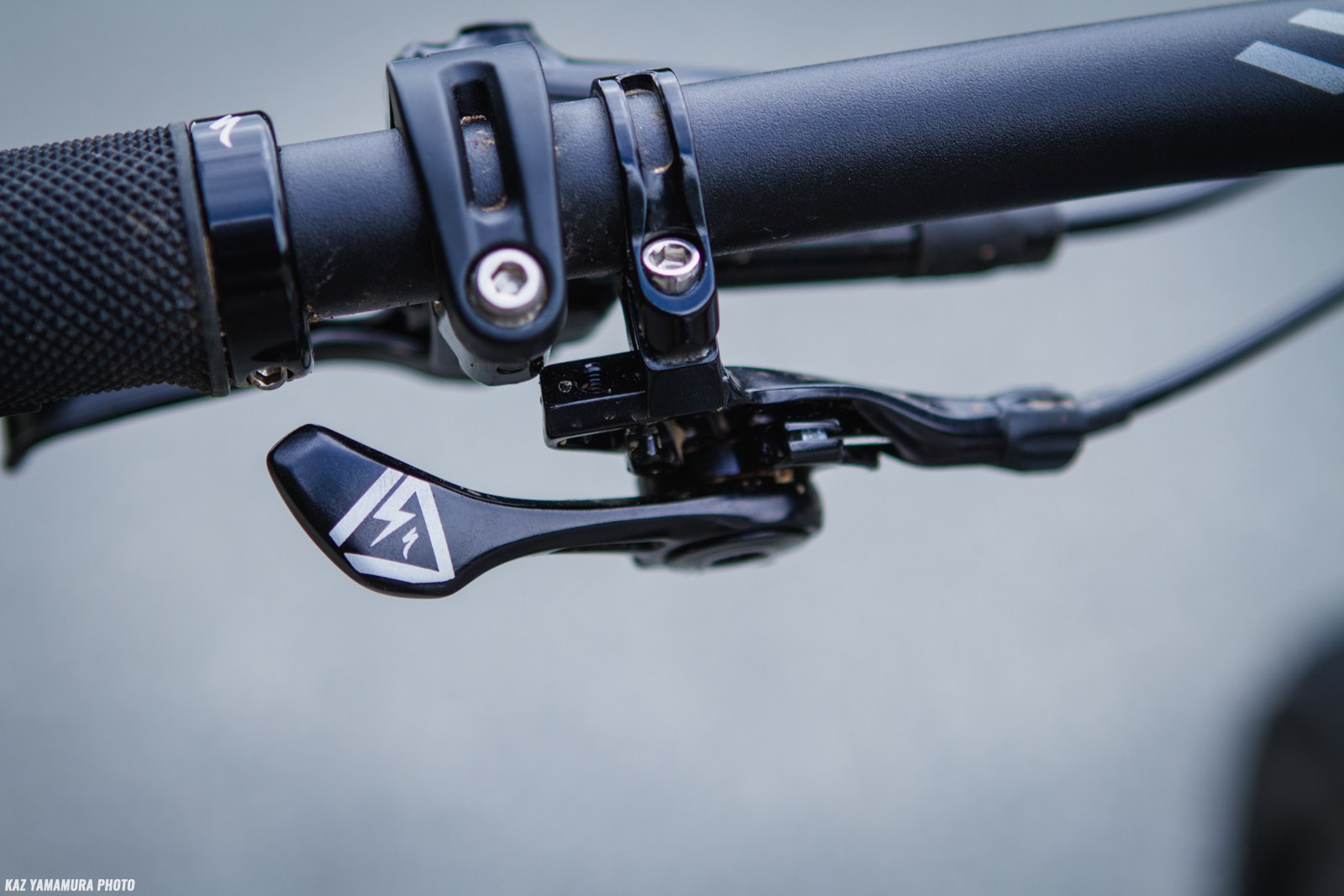 The newest release lever for Specialized’s Command Post is as good as any I’ve used. It tucks away tidily under the bar for protection. 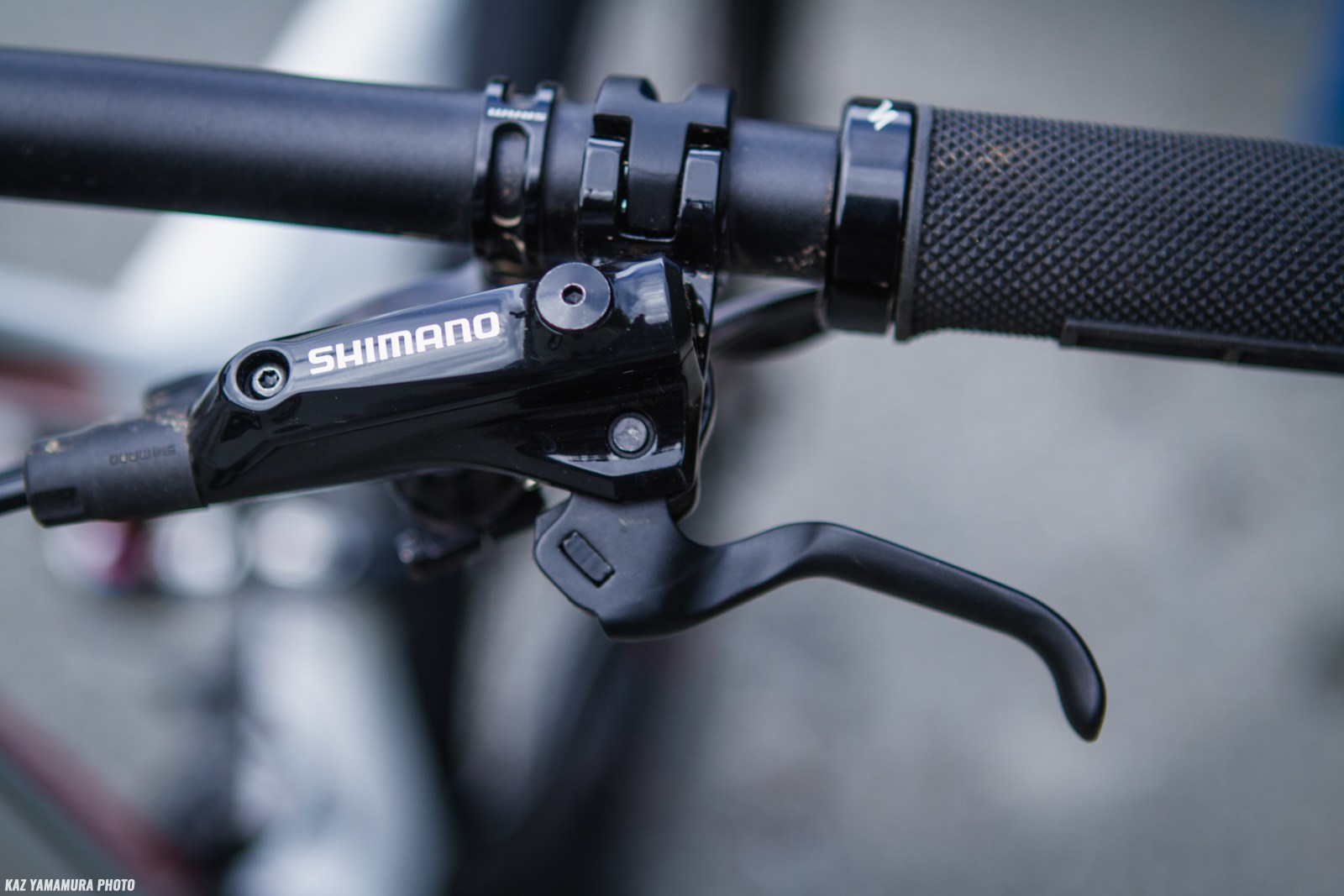 Deore brakes seem like a low spec for a $4500 bike – but I have no complaints a few rides in. 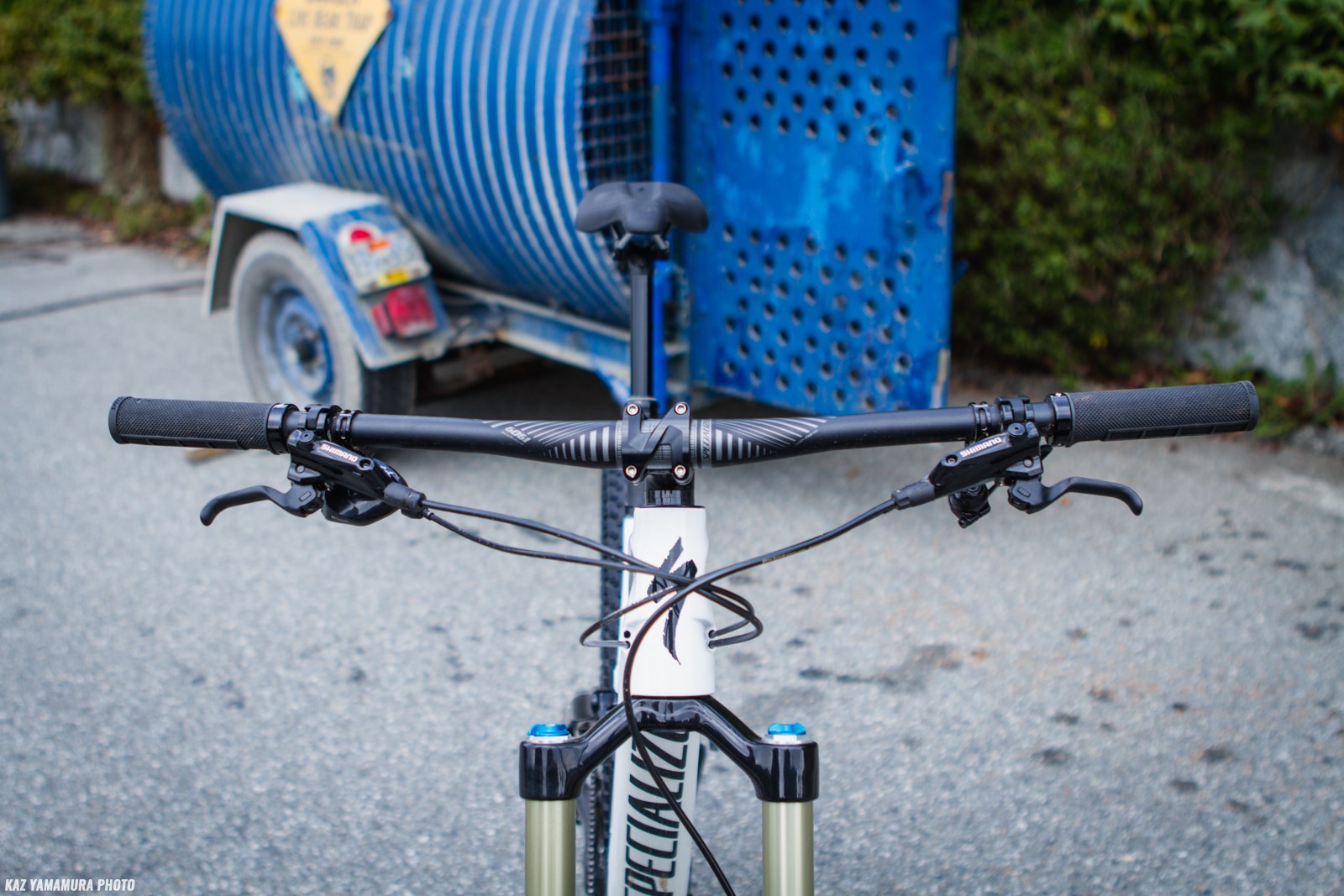 Because of the tall front end Specialized spec’ed a flat bar. And flat bars are ugly. This one is 750mm wide – which is too narrow for many riders around here. (Watch out for the bear. He’s still at large in North Van) 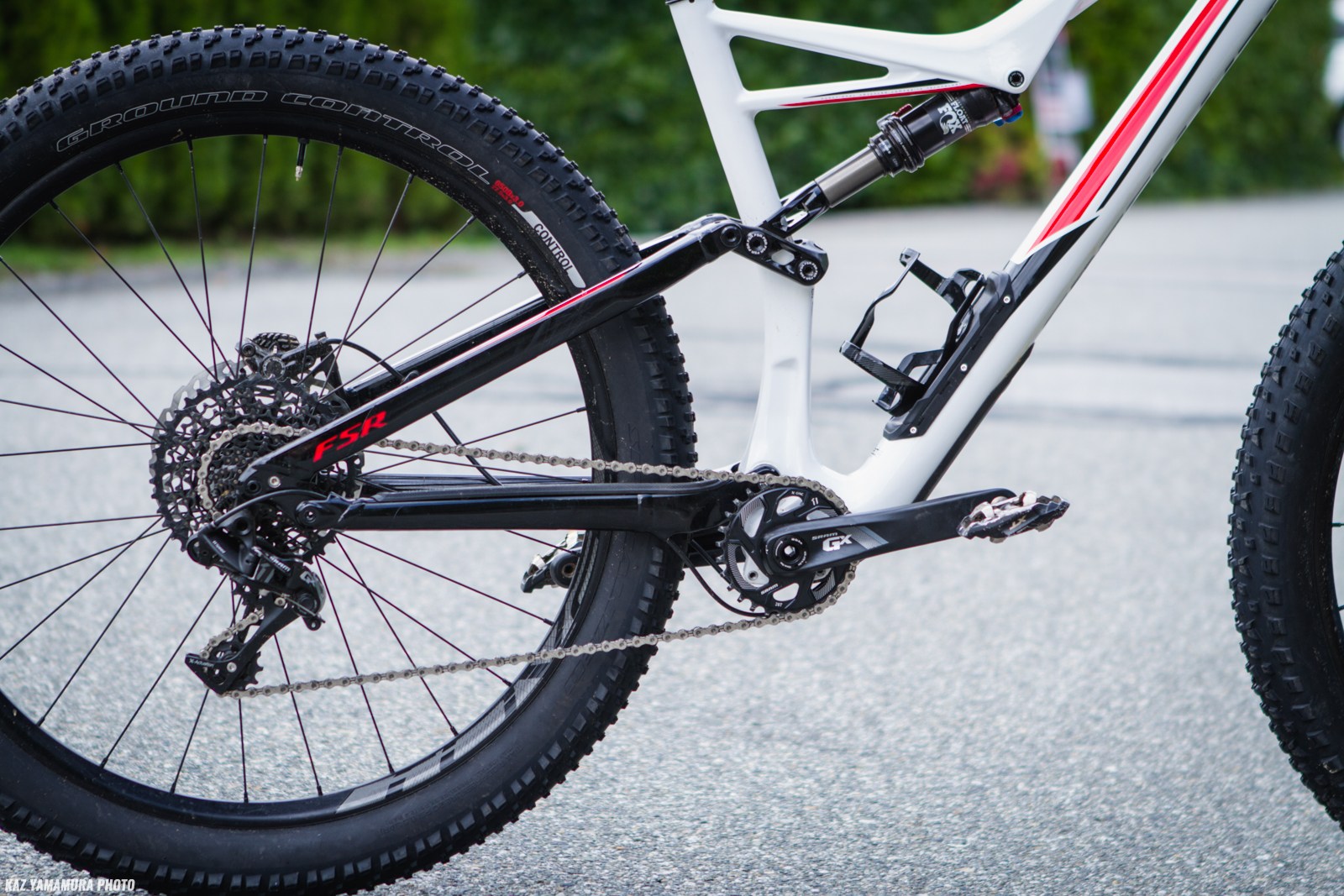 A SRAM GX 1BY drivetrain gets the power down. 27 Plus tires are as large as 29ers in diameter so the 28 x 42 low gear is welcome. 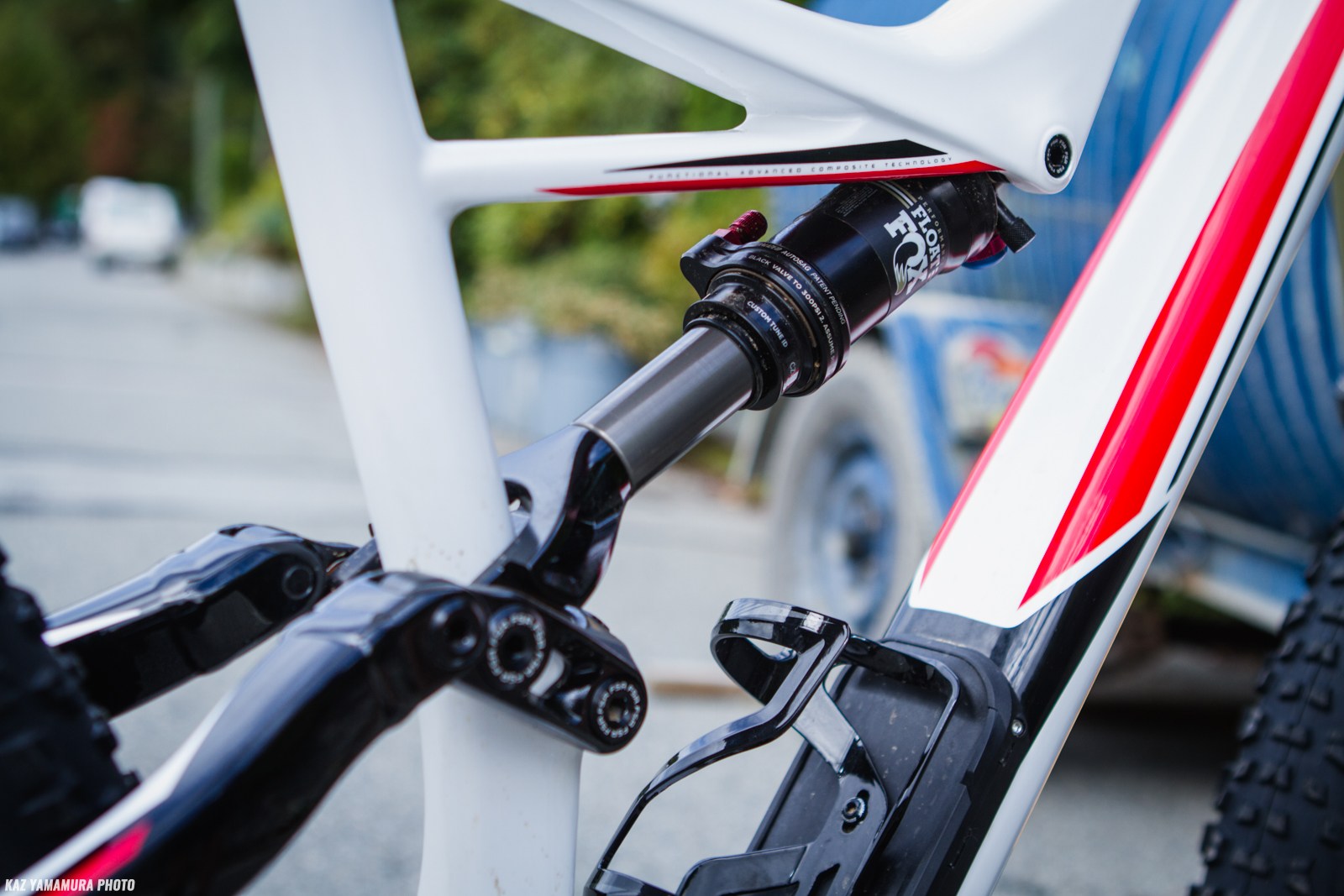 The FOX FLOAT Performance DPS rear shock comes equipped with Autosag to take the guess work out of your set up. You’ll need a pump that goes to 300 psi though. 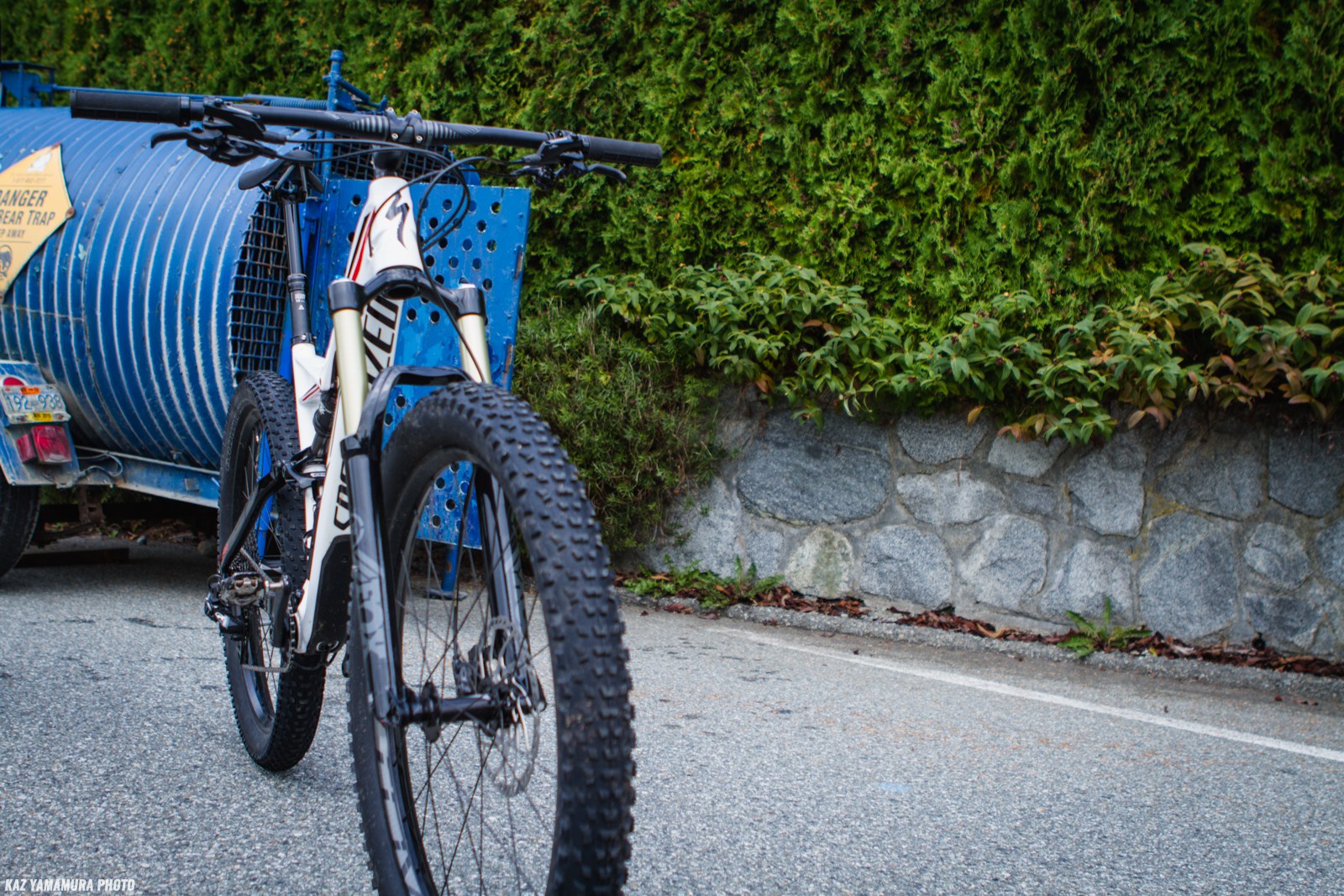 Popular opinion suggests Plus bikes are slower than their slimmer counterparts – but some riders are finding them faster up and down. Including one rider who won Provincial Champs in both DH and XC. Don’t tell him they are only for beginners and idiots though.

There is something to these bikes for sure. I need more time to serve up some coherent ride impressions, so look for that in the full review. I will say that I dropped a buddy the other day – one who usually hound dogs me relentlessly.

Just maybe these bikes are fun and fast.