SRAM’s new Guide brakes replace the XO and Elixir four piston Trail brakes. While the four piston caliper remains unchanged, the lever has seen a complete redesign. Also worth noting is the new brakes bear only the SRAM name, leaving the Avid name behind.

The Trail series of Avid brakes have been popular on everything from up-spec’d XC bikes to weight-weenie DH builds, but the lightweight four piston design was most at home in the mid travel range. With the offset caliper sorted, SRAM set out to replace the Taperbore lever design which was shared with the two piston Elixirs. 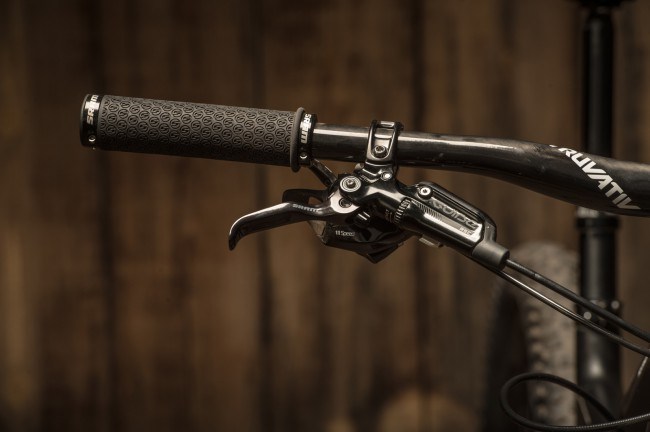 The heart of the new Guide brake is a ground-up lever redesign. Seen here is the RSC model with reach adjust, contact adjust, and bearing lever pivot. 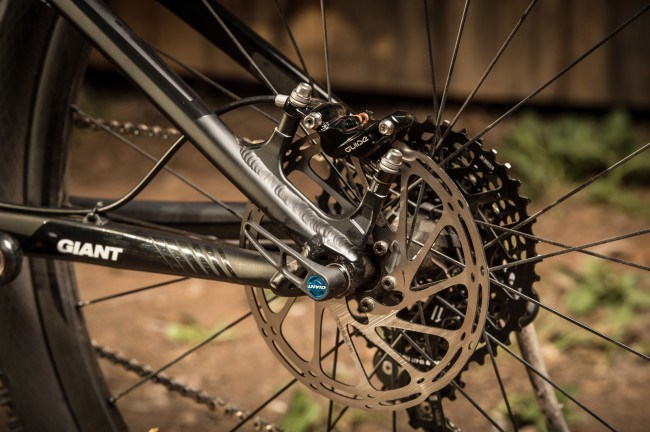 The four piston caliper from the previous Trail series of brakes remains unchanged, but now clamps on a new Centerline rotor. 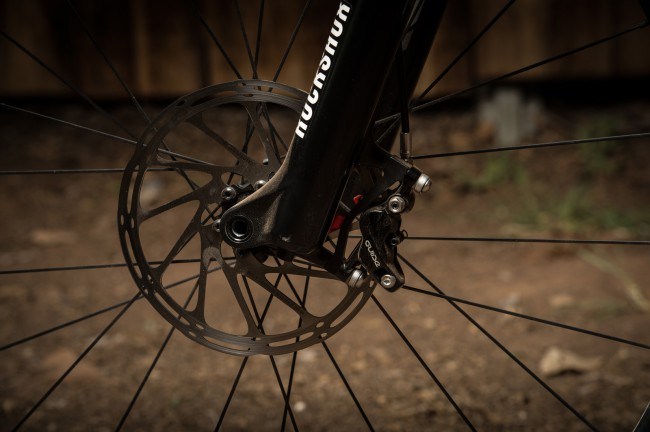 The new rotor is claimed to be quieter, but slightly heavier. Total system weight per wheel is 375-380 grams depending on model. 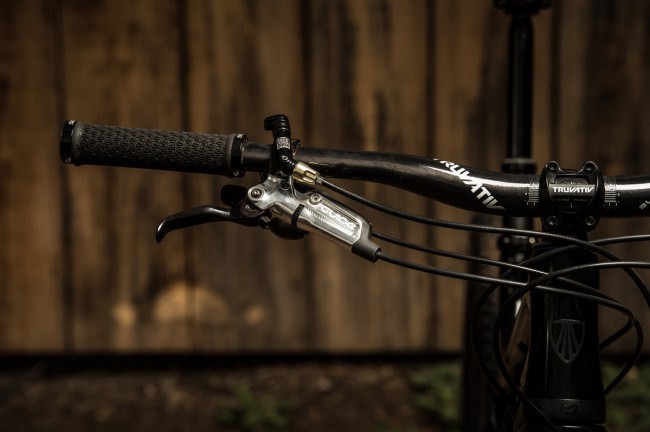 Guide brakes are also available with silver levers and calipers.

SRAM’s goals in redesigning the lever were to improve lever feel and system reliability while retaining the power and modulation that the Trail series of brakes were popular for. A number of new technologies set the Guide brake apart from its predecessor, and it is indeed a good step forward. Let’s get into how these changes affect the feel and ride. 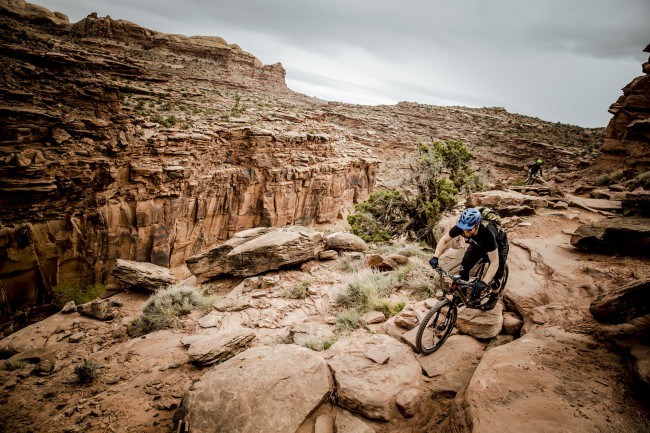 Three days in Moab with 2500 metres of descending put the Guide brakes to the test. Photo Adrian Marcoux.

The Guide brake’s lever throw and and resultant feel is due to a one piece hardened steel lever and cam assembly to which the blade attaches. Pull the lever and the initial stroke is taken up quickly, at which point the cam gets into its working range giving a consistent feel throughout lever throw.

The cam profile is designed to provide consistent feel throughout the range of the contact point adjuster on the RSC model, and in riding the Guide brakes in various adjustment configurations I can confirm that. 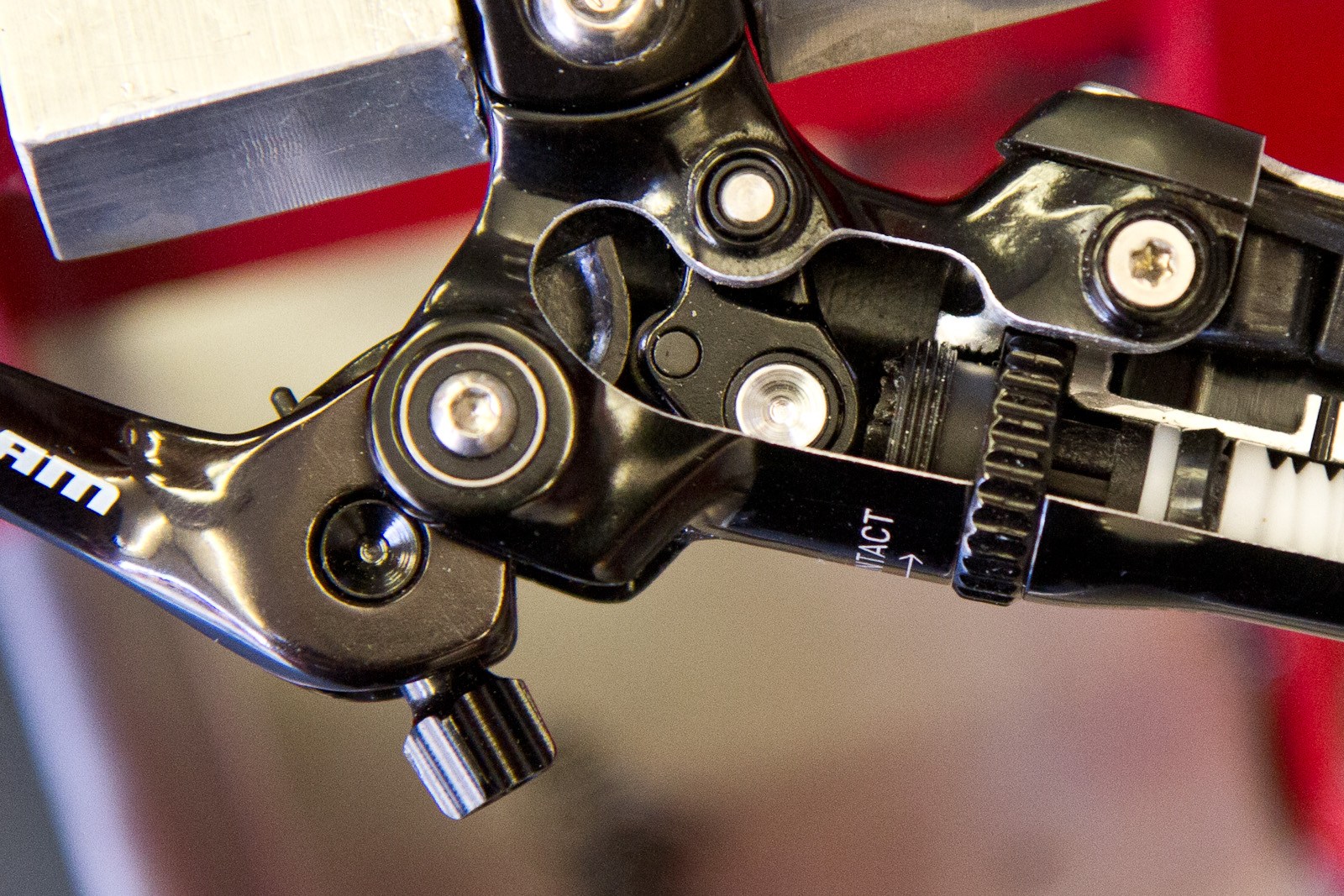 This cutaway allows you to see the lever and cam assembly, Swinglink actuating the piston assembly, and reach adjuster (dialed all the way out). Photo Morgan Taylor.

The Swinglink cam actuates a cylindrical piston assembly, using small holes to allow fluid to enter and exit the reservoir above. A cup seal on the piston moves past the timing port when the lever is engaged, closing the system.

The contact point adjustment on Guide RSC changes the relationship between the cup seal and timing port, giving you independent control over when your brakes bite. Combined with lever reach adjustment, this provides a more useful range of adjustment than on the previous Avid products.

The Guide lever in action. On either side of the white piece of the piston you can see the two cup seals. The forward seal begins its stroke on the outside of the smaller hole (timing port). As the lever is actuated, the seal goes past the timing port, closing the system and actuating the caliper. The reach adjustment – in this case at its farthest out – changes when the seal passes the timing port in relation to lever position. Air and excess fluid are purged back into the reservoir. Photos Morgan Taylor.

Avid’s Taperbore reservoir was a fully inline system and as we found out over the years, was susceptible to air pockets. While SRAM was able to improve the issue with a couple of updates, OEM level brakes were still hit or miss with the Elixir series. This is possibly the most important point of the new system: restoring OEM (and dealer) faith in SRAM’s brake offerings.

The new PiggyBack reservoir, in combination with the TPC system, eliminates the problems inherent in a conical taper design it replaces. A protrusion in the reservoir casting keeps air from going into the high pressure (piston) side of the system even when the brake is cycled with the bike upside down. 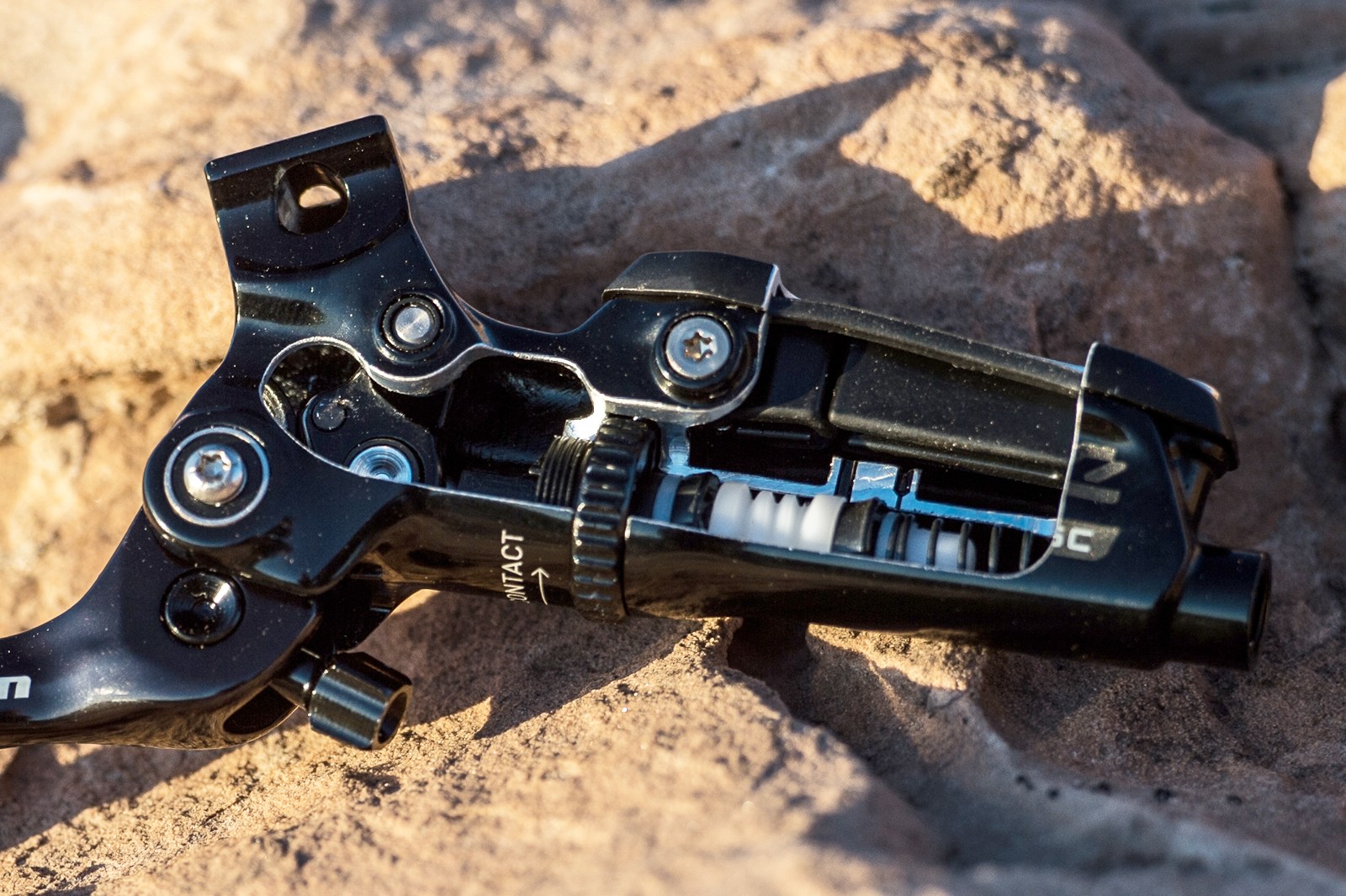 The blocky protrusion above the forward cup seal here is important in keeping air out of the system. When the lever is turned upside down, air bubbles will sit above the timing port intake. The new system is ambidextrous as with Avid products of the past.

Adding to the updates in lever and piston design, SRAM has implemented a butyl bladder system which decreases system vacuum resulting in a more consistent return. The increase in negative (reservoir) fluid volume provided by the new master cylinder design should provide a lower maintenance system overall.

Getting away from the turkey gobblers of the past, SRAM’s new Centerline rotors are designed to reduce vibration and run smoothly while managing heat better than their predecessors. The Centerlines are slightly heavier than the HS1 rotors due to extra material for heat dissipation, and will be available in five sizes: 140, 160, 170, 180, and 200. 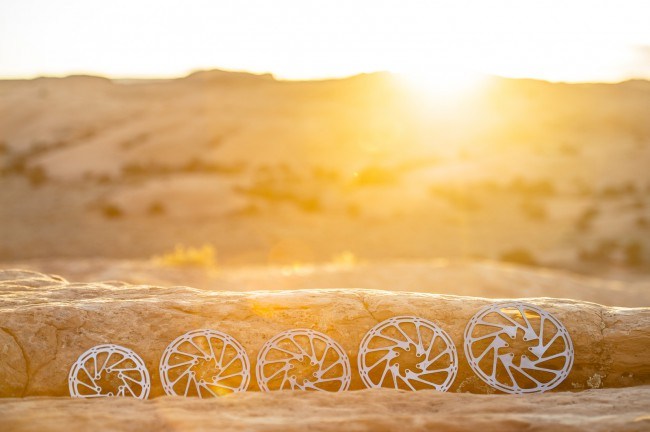 Three days on the Guide brakes in Moab didn’t produce any undesirable ride traits and they were indeed smooth, but I’ll hold my comments on noise until I can get a chance to ride ride them in a coastal torrent. 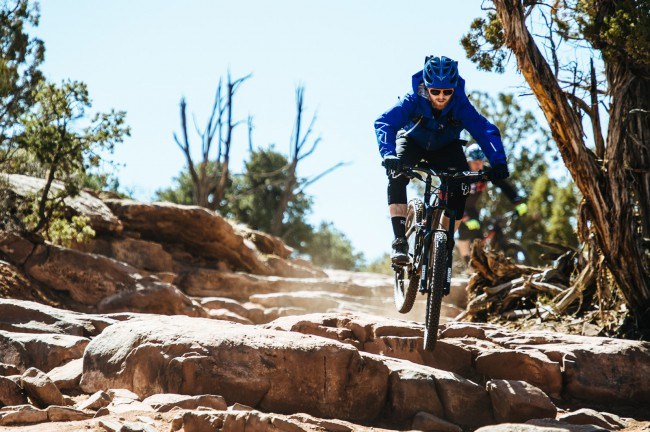 Much of the Porcupine Rim descent is best done off the brakes to keep speed up, but that means reining things in quickly when necessary. The Guide brakes retain the power of the previous Trail series but see improvements in lever feel and adjustability. Photo Margus Riga. 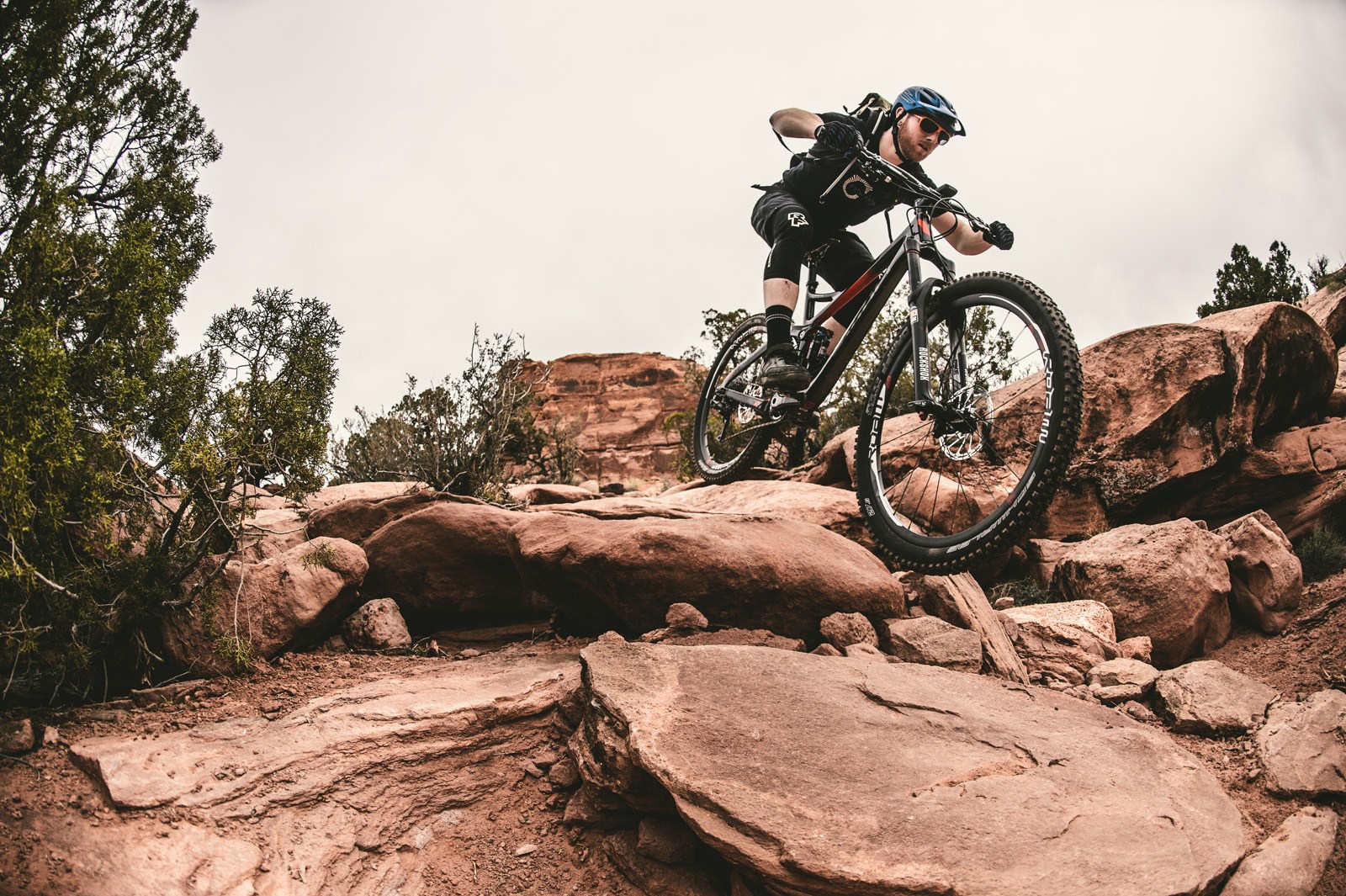 Captain Ahab is Moab’s new school up and down loop, the perfect place for a mid travel bike. Slickrock will certainly let you know what a brake’s modulation capabilities are, and the Guide brakes retain a nice positive lever feel with the ability to finesse. Photo Margus Riga.

As the Guide brake replaces the current Trail series, it follows that the system is available at three option levels; model names indicate the technologies included:

Ah, another revolutionary redesign of disc brakes by SRAM… surely one of these years they'll get it consistently right.

Is it okay to nickname this brake the "Juicy XT"?