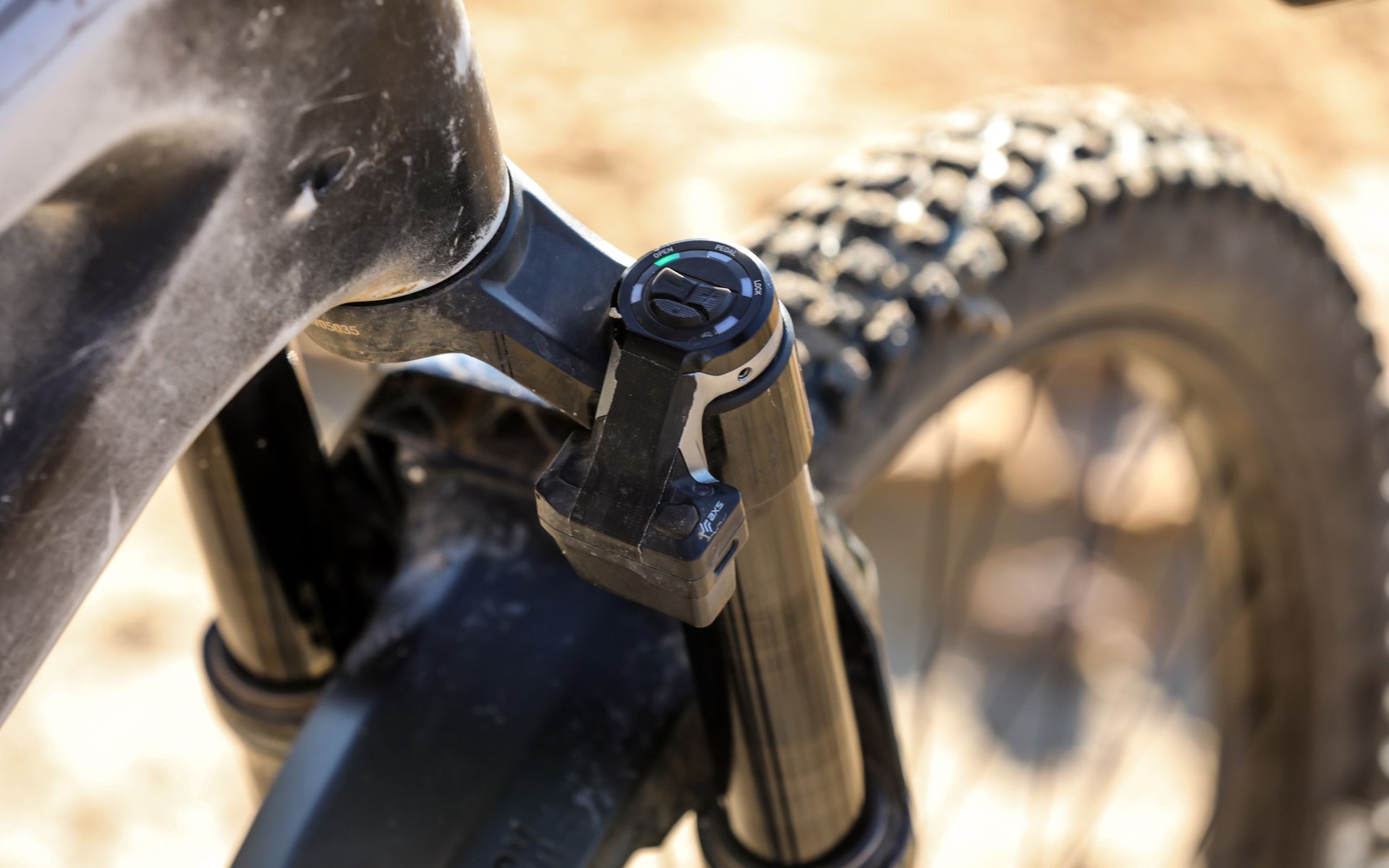 FLIGHT ATTENDANT
The only automatic suspension system that listens to the rider and responds in real-time. Flight Attendant uses a suite of sensors to read rider and terrain inputs to anticipate the perfect suspension position—enabling you to ride faster, ride longer, and spend less energy adjusting your suspension and more time focusing on what matters most: the unbridled joy of riding. 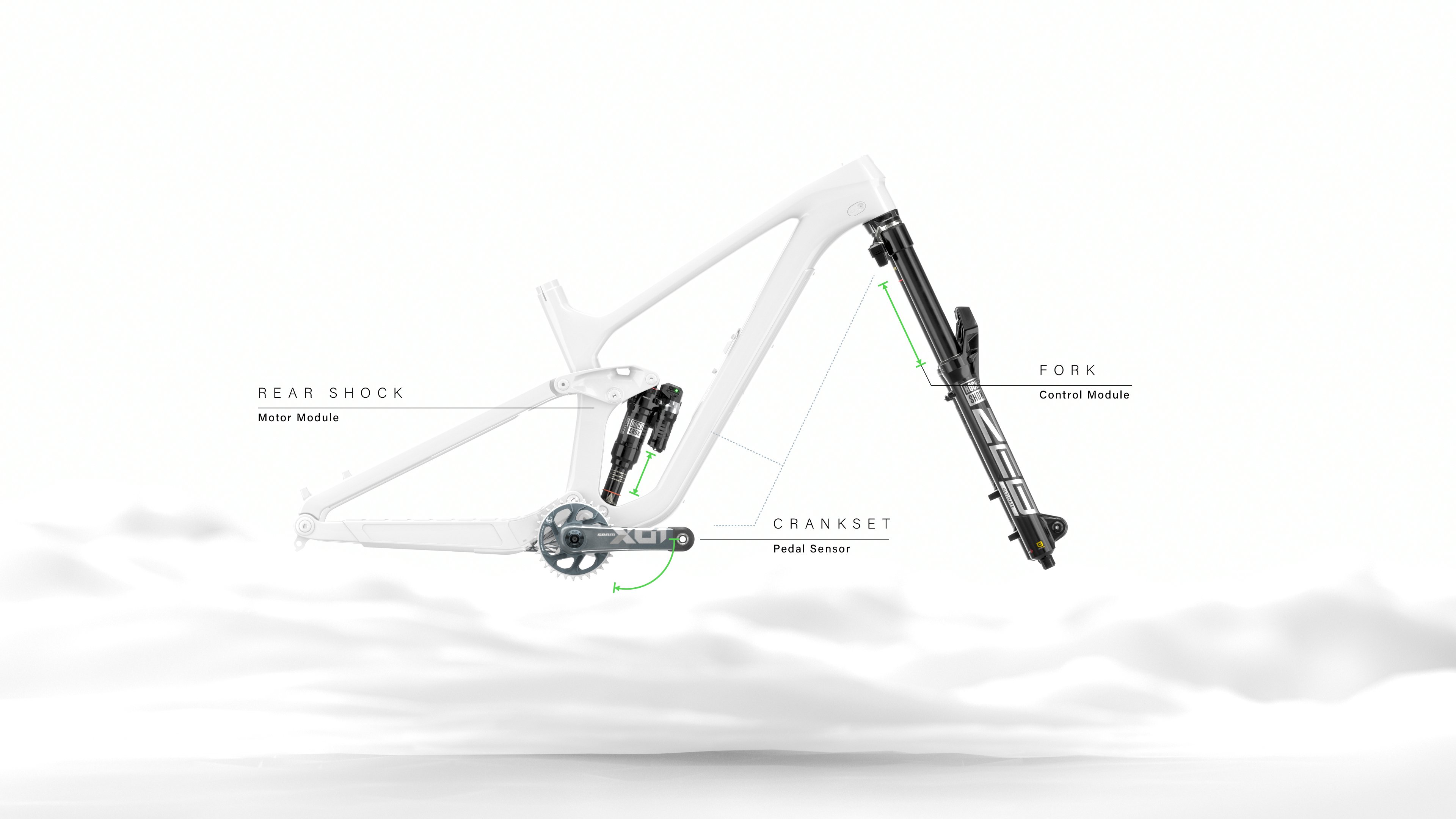 SENSE IT FIRST
A suite of sensors onboard your fork, rear shock and crankset work in unison to detect every bump, pitch, and pedal stroke made. Flight Attendant is the only automatic suspension system that listens to the rider and paints a picture of the complete riding experience in real time. 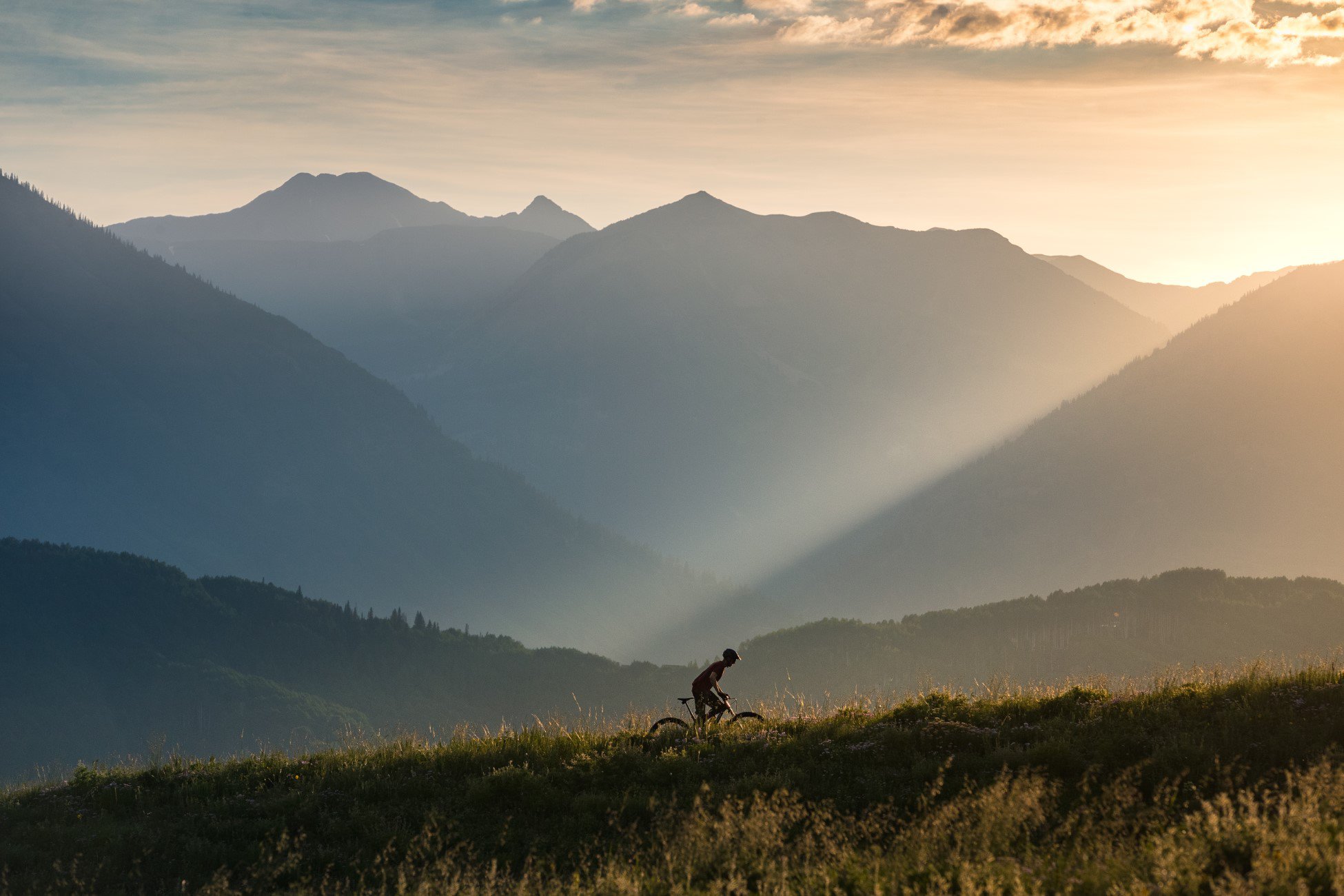 FUELED BY SCIENCE. FEELS LIKE MAGIC.
Developed over thousands of trail miles around the world, Flight Attendant’s on board algorithm is scientifically engineered to do the complex thinking for you. It analyzes the constant flow of ever-changing data to anticipate the perfect suspension setting for the rider and what the trail demands.

FURTHER FASTER
Your burly Enduro bike becomes fit for longer climbs. Your trail bike becomes as efficient as a cross-country world cup steed. Get the most return on every pedal stroke, weight shift, and micro adjustment you make, there’s no energy wasted. Flight Attendant capitalizes on every ounce of effort you put in, optimizing your suspension and maximizing your bikes performance all while you ride. You’ll ride further, faster and with more energy gained. 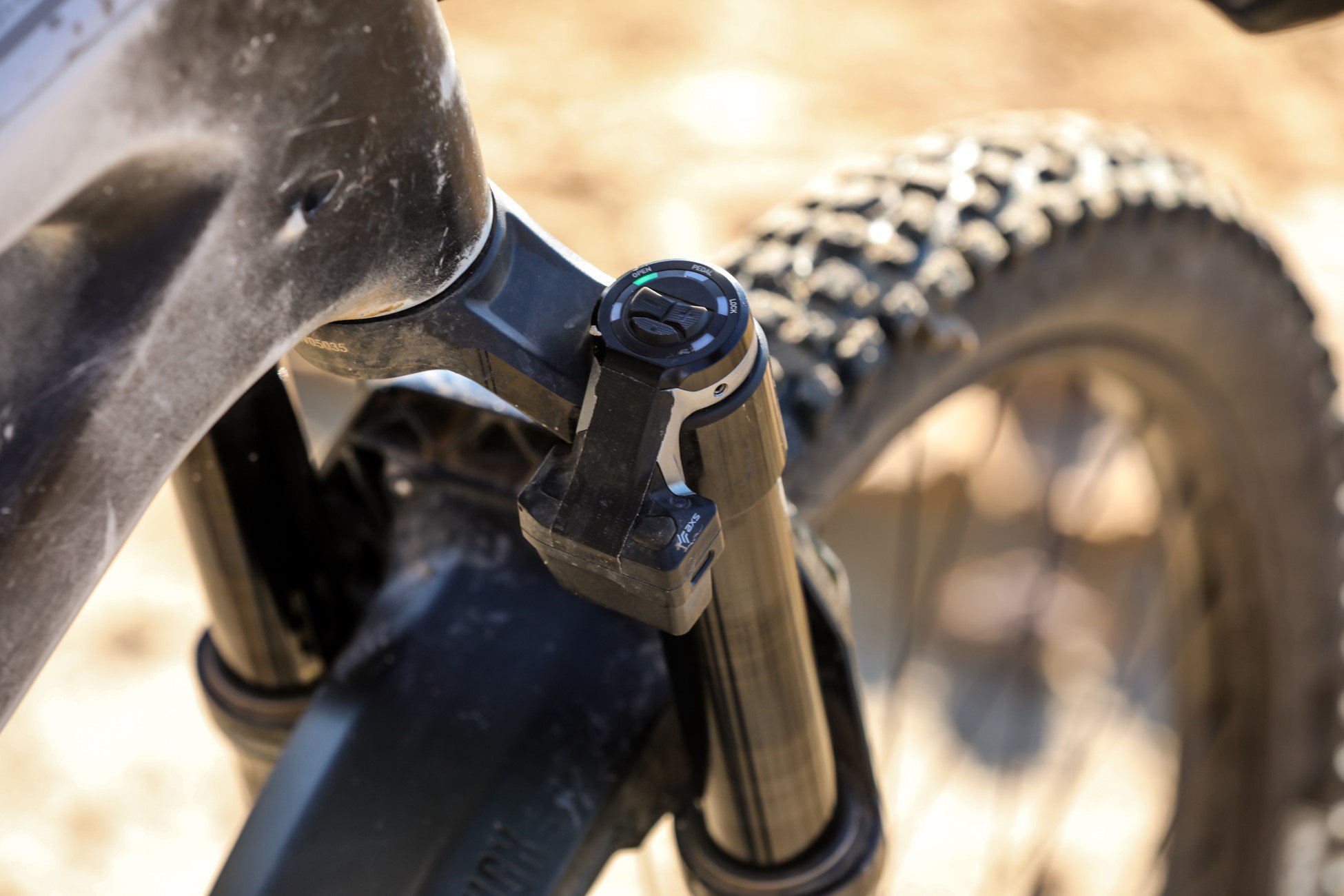 In Auto Mode, Flight Attendant deciphers every input and sends its commands to the AXS-enabled fork and rear shock to instantly react. It does the critical thinking for you. Your suspension is always in the right position at exactly the right time, automatically shifting between Open, Pedal and Lock compression positions before the thought ever crosses your mind.

Life isn’t black and white, or as easy as on or off. Balance is often found somewhere in-between. A 3-position system provides more choice and efficiency gains in more situations for the rider. With Open, Pedal and Lock compressions positions, the Flight Attendant algorithm finds the best connection to the trail, providing the right level of support and comfort at the same time.

OPEN
The moment you point your bike downhill or your tires hit a big impact, Open position allows your suspension to utilize the full amount of available travel while feeling plush and ready to absorb the next big hit.

LOCK
Power to the pedals. In Lock position, the suspension is at its firmest setting to maximize your effort as you put the power down on those long grinds 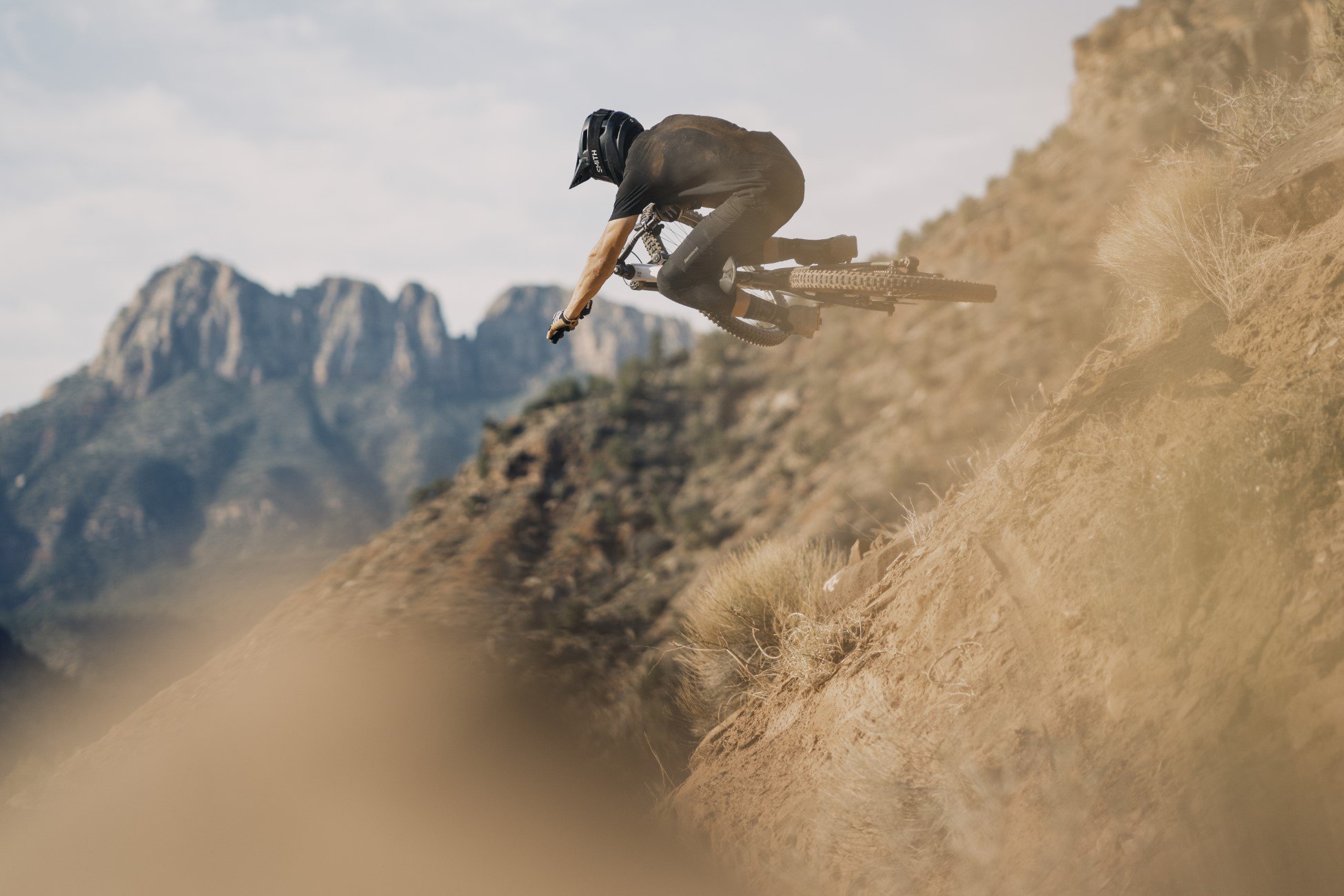 FLIGHT ATTENDANT MANUAL MODE
On those rare occasions when you need to opt out of Flight Attendant’s Auto Mode, the control’s there if you need it. Disable Auto Mode and cycle between suspension positions on demand. Manual Mode can be accessed through either the Flight Attendant Control Module, or on-the-fly with a click of the assigned paddle on the RockShox AXS Left hand 2-Button Controller.

FLIGHT ATTENDANT OVERRIDE MODE
A shortcut to your desired suspension position. Press and hold the assigned paddle on your AXS controller, Override Mode turns off Auto Mode and shifts the system into your designated Override position: Open, Pedal or Lock. After that all-out sprint, or when ready, click the same paddle again to re-engage Auto Mode, and never miss a beat.

GET HOME SAFE
Built in peace of mind. If a system problem arises, like a critically low battery, Safe Mode automatically places the suspension system into the Open position so you can get home safe to recharge. 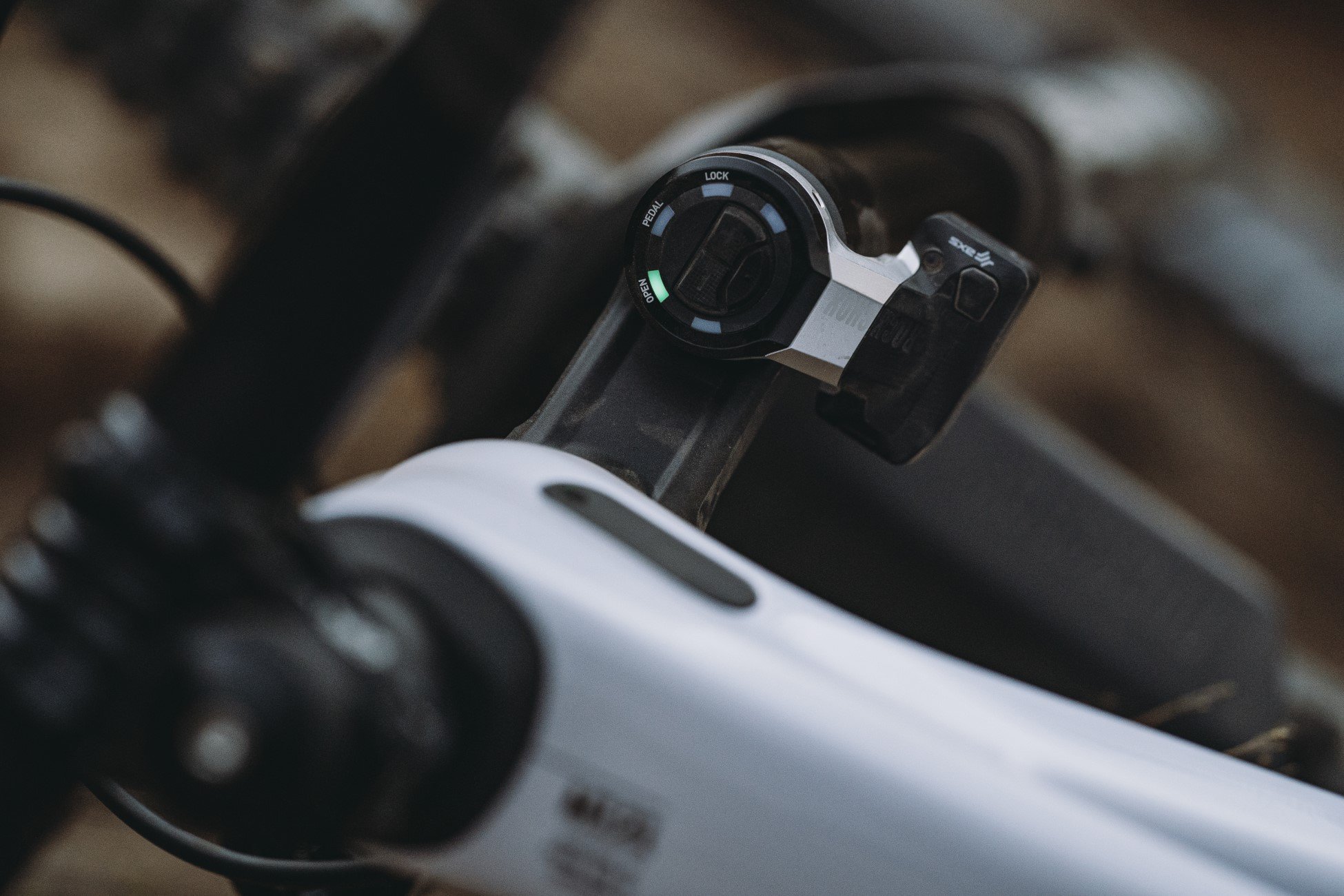 Bias Adjust give you the power to fine tune how Flight Attendant reacts in Auto Mode to your personal ride style and preference. From the factory, the system is set right in the middle: Zero Bias, for an effective balance of all three suspension positions. Based on personal ride style, adjusting Bias instructs the Flight Attendant system to favor the Open or Lock suspension positions.

There’s no right or wrong, Bias Adjust is all about choice and fine tuning the feel of the system to better match your style. Adjust your Bias at any time through the Flight Attendant Control Module or a simple tap on the AXS mobile app. 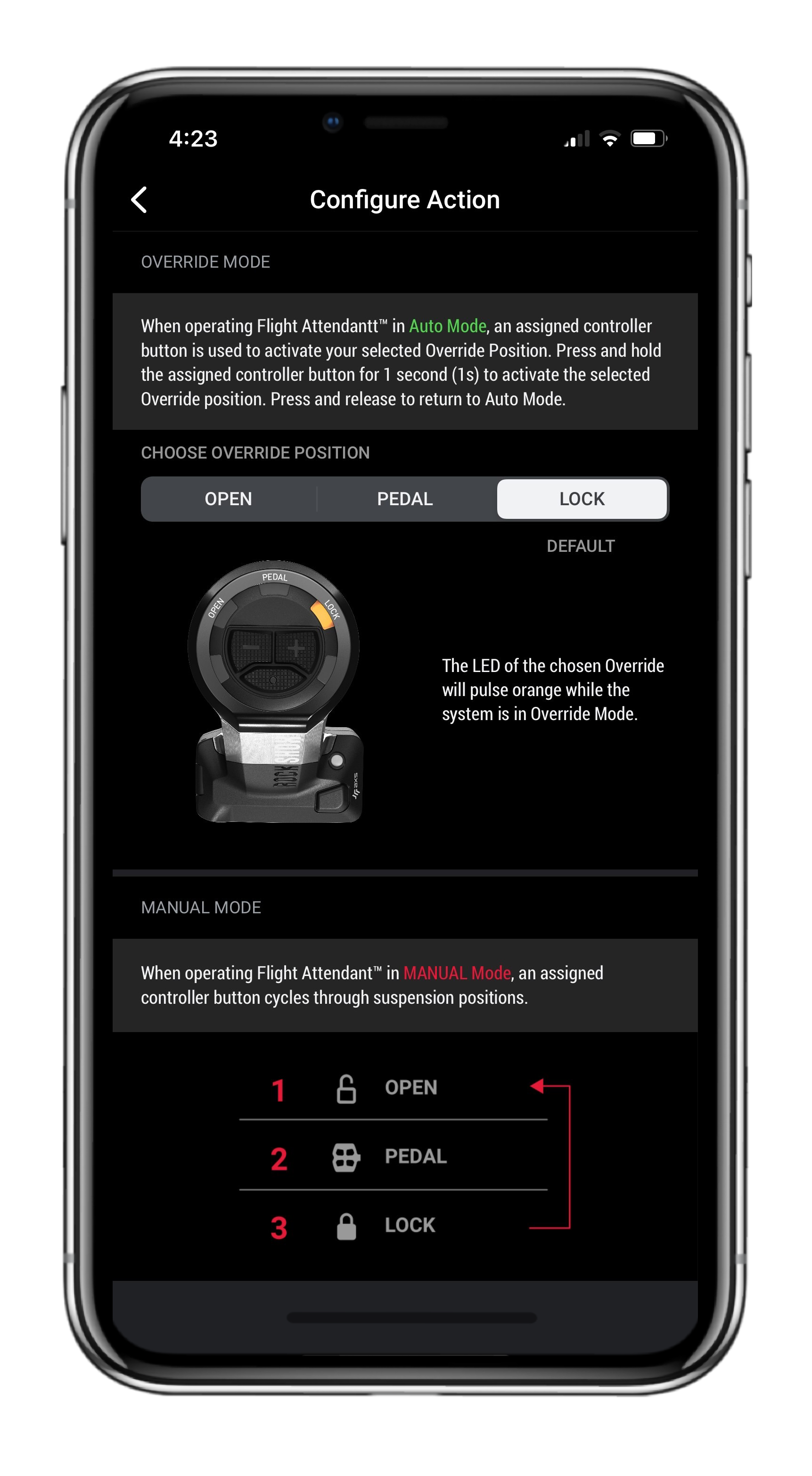 THE APP AT THE CENTER OF IT ALL

AXS-enabled and completely customizable. Flight Attendant is an integrated part of the AXS ecosystem. Use the SRAM AXS App to adjust settings for your entire AXS system, Flight Attendant included. Build a bike profile, customize your controls, check battery charge status, and update firmware as needed right from your phone.

Out of the box or fresh from your favorite retailer, set up is simple. Pair your AXS components, set up your front and rear suspension, calibrate the Flight Attendant system, and you’re done! Flight Attendant remembers everything. Next time, get right to the ride. 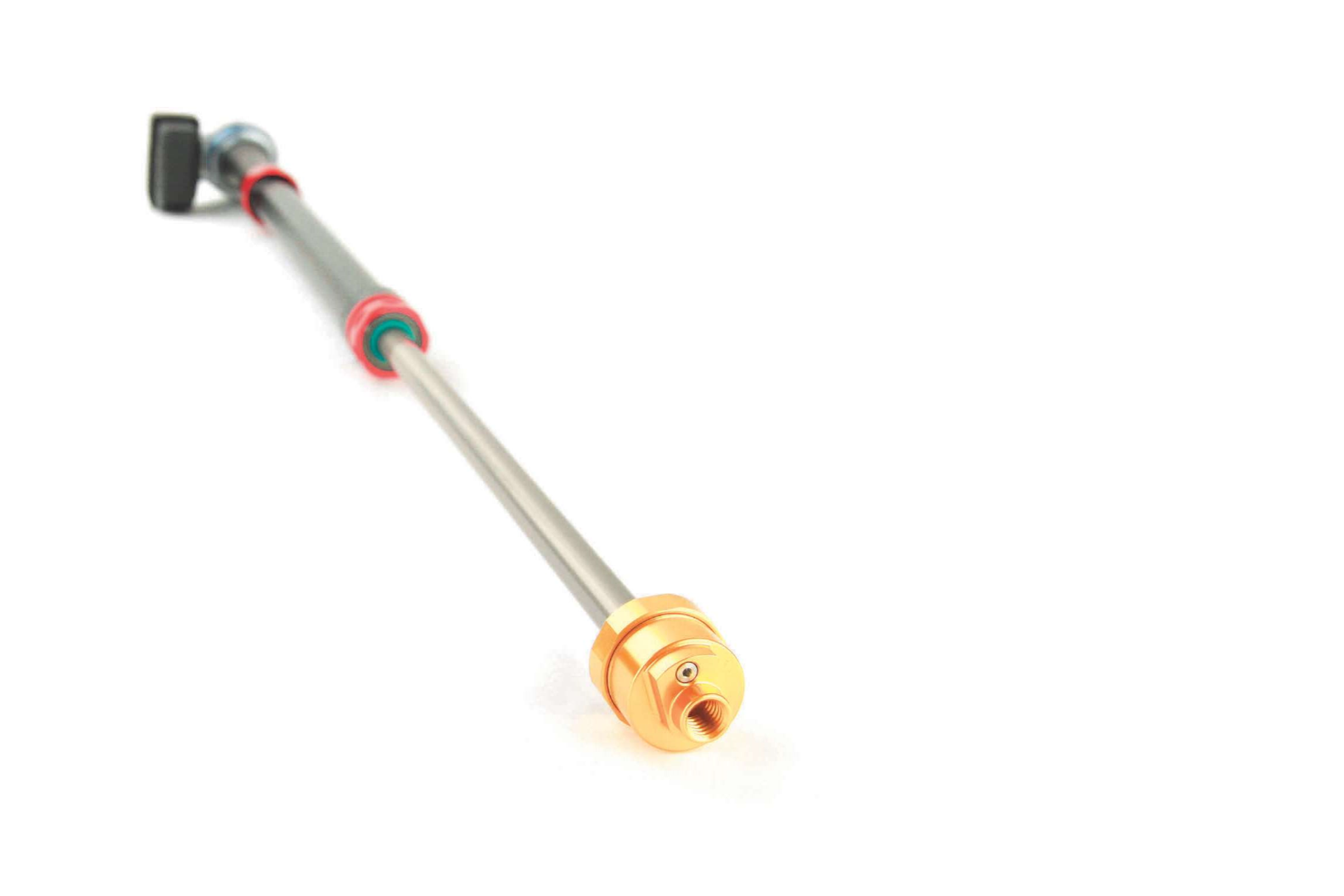 Low amplitude, vibration reducing material pucks... but we like to call them ButterCups. ButterCups block 20% of unwanted “trail chatter” before it reaches your hands. The gold housings on the end of the damper and air spring hold two rubber pucks that absorb the high frequency vibrations before they travel through the fork and into the handlebar. ButterCups reduce overall hand and arm fatigue and will leave you feeling fresh with more control over the trail. 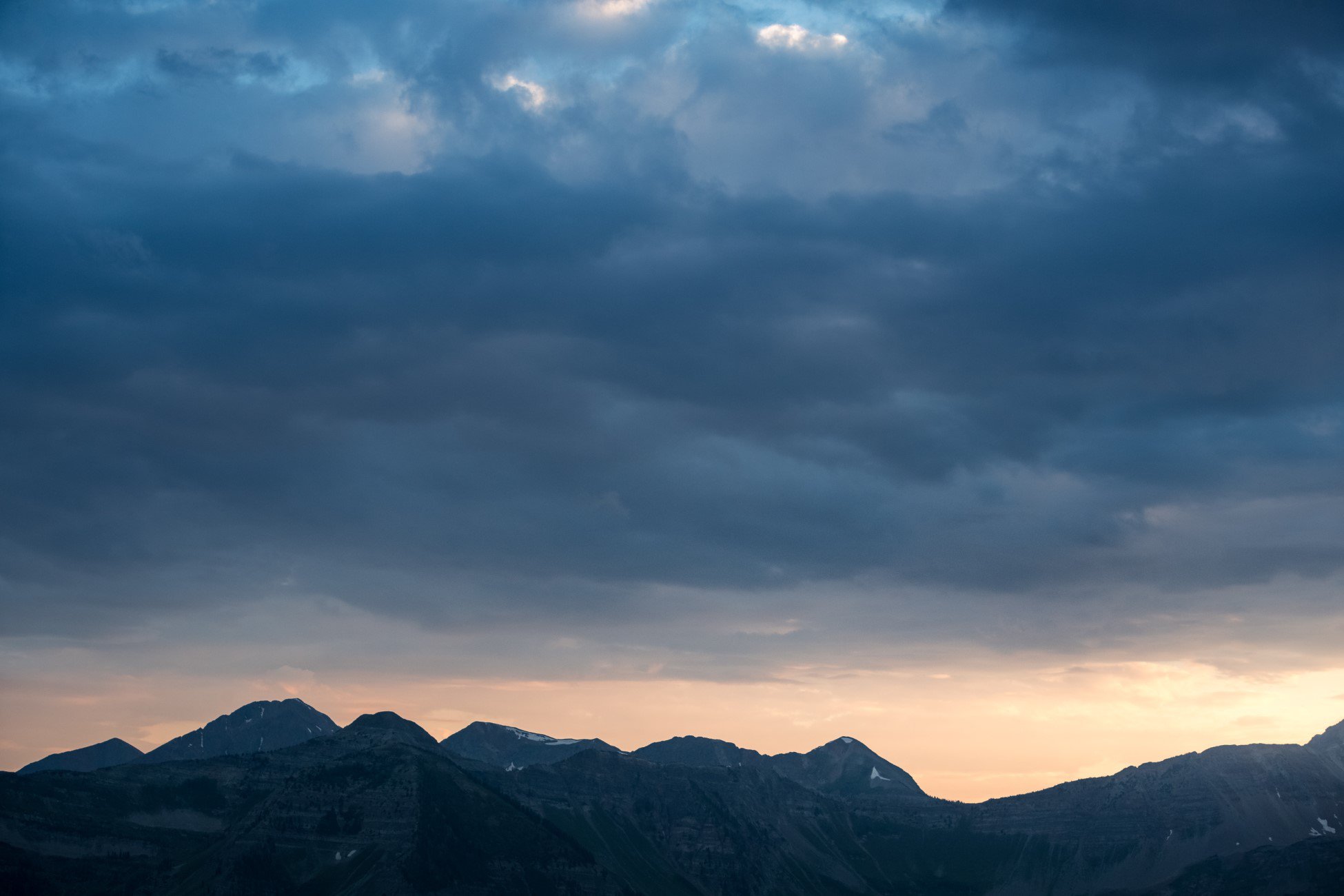 For the full lineup of Flight Attendant products and specs, visit the SRAM landing page

SRAM's GX AXS is here (and we've been riding it)

A unique mix of dumming down and making simple things needlessly complex.

If you do not like dials and doodads then get the RC version.

If you do like all the buttons then get the RCT3 and fiddle away.  If you have money to burn then get your suspension tuned by a professional.  Hey, side effect is that you may learn more about what is going on and what you are feeling on the trail.

The addition of more batteries and widgets seems wasteful from the perspective of need to cost (R&D trickle down cost to end user price) as well as environmental costs with more complex heavy metal electronics that will die quicker than pure mechanical suspension.

Second part of the added costs are for maintenance. Instead of mechanical components you can tear down at home you have electronics which are difficult to diagnose and repair.

So who is this for? The guy who wants all out performance? Maybe, but my experience tells me that those same people like to understand their équipement and exercise control over the finite details rather than cognitively offload that role.  The new guy who wants to Keep It Simple (KIS)?  Not likely in their beginner friendly starter budget.  The rich person just getting into the sport who does not know any better?  Probably the most likely candidate right behind a youtube mtb pro trying to sell you on the need for an ebike.

Personally, I do not agree with this trend. Lazy, wasteful, expensive and not needed. Bougie to the nth degree.

Agreed 100%. I’ve been kicking this around in my head all week, trying to see it from a different (non-cynical) perspective. But so far I just can’t. You’ve covered the essentials of the argument in my head, and the only thing I’ll add is that I just don’t see how it’d make my ride experience any better. Case in point was this afternoon’s ride: it was on my local lap. Fairly steep bits in the approach, 1300’ climb. HR is 160ish the whole climb. Takes me 55-60 min any day of the year. No dabs, no faffing around, seldom stop for pics or food, i just go. I just can’t sort out where this system would do me an ounce of good. I’m an experienced rider on a current-year enduro bike, I ride high quality suspension (AND I know how to set it up), and I ride often. Because FA only changes things on the climbs and flats, I fail to see how it’d make my riding experience any better. It isn’t going to get me up the mountain any faster (right?) and because it is ‘open’ on descents, it’s no different than my existing Lyrik and Super Deluxe.  Can someone help me understand the value?

Nope - also can't see the value of it. Maybe it's something for the ebikers out there. I'm sure they'll lap it up.

For me on my meat powered bikes (I don't ebikes) I will be sticking with good ol' mechanic suspension. Definitely a kase of KISS.

It's right up there with electric shifting - it's sounds great and probably works amazing and all but I will stick with mechanical shifting. I want my bike to be simple and something that I can work on w/o a soldiering iron and an electrical engineering degree.

As as aside - you get used how your bikes rides and your body can adjust to a degree of bob.

I can’t see the value either. I can’t sort out why RS didn’t just come up with LS compression on more of its suspension offerings to achieve essentially the same outcome with a far less complex outcome. Oh wait, because dollars. All I see is a huge spendy crutch.

Also… re ebikes… I actually think this system would make the ebike experience *worse* because stiffening the suspension would adversely impact traction especially when climbing. I’ve put in about a dozen rides on two (drastically) different eMTBs and found they worked ‘best’ when climbing while seated and keeping a high-ish cadence. So yeah while the hypothetical American endodontist would probably check the ‘Flight Attendant” option box on his S-Works Levo SL build, he might soon come to regret the expense. Or not. Who knows.

I'm (hopefully) thinking most NSMB readers are long enough in the tooth to be skeptical of these "latest and greatest" gadgets.  Hence the radio silence.

Let's keep this comment around for a few years when the editors, maybe not Majors for this particular purchase, release their next "Worst Purchase" article.

Alternatively lets get someone from the other side of the aisle.  Is this a glorified climb switch (since its wide open on the downs and doesn't affect rebound)? Or is this a stepping stone towards technological greatness and full electronic integration?

I will directly call out NSMB here since it's their website: AJ, Pete, Cam, Trevor, Andrew, other dudes (are there no female voices on NSMB?).  The gauntlet has been thrown down.