Riders can be divided into two groups; those who sometimes have trouble dialing in the suspension, and liars. Of course, some riders are better than others but it is occasionally challenging for even the best.

Dusty Dynamics, a Western Australian engineering firm, set up a Kickstarter for a telemetric system designed to evaluate the performance of your mountain bike suspension and then send that information to your smartphone. Once received the ShockWiz app will tell you what kind of job your current settings are doing and then make adjustment recommendations aimed at improving your bike’s performance both up and down. 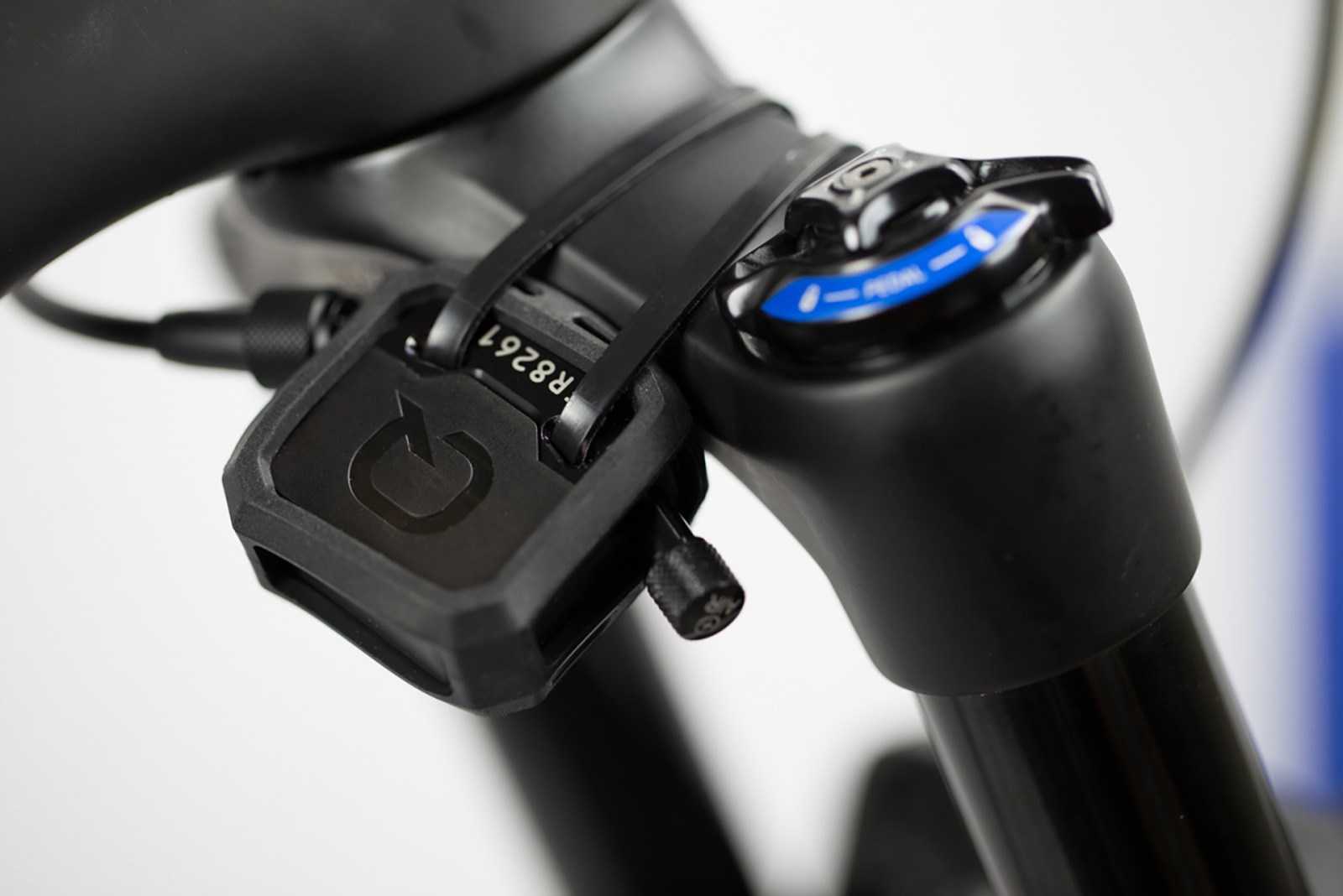 SRAM’s involvement (through Quarq) has tidied the device significantly. Pressure can be adjusted through the mechanism during evaluation.

Telemetry simply refers to the remote collection of data about a system that can’t conveniently have an engineer strapped to it for extended periods. Telemetry has been used since the 1990s in F1 (although it has been banned for races since 2003) to send data on everything from suspension performance, temperature, wheel speed and driver performance. Telemetry was used to send data between the Czar’s winter palace and army headquarters in 1845 and more recently to monitor the orange tint used on Donald Trump’s face. 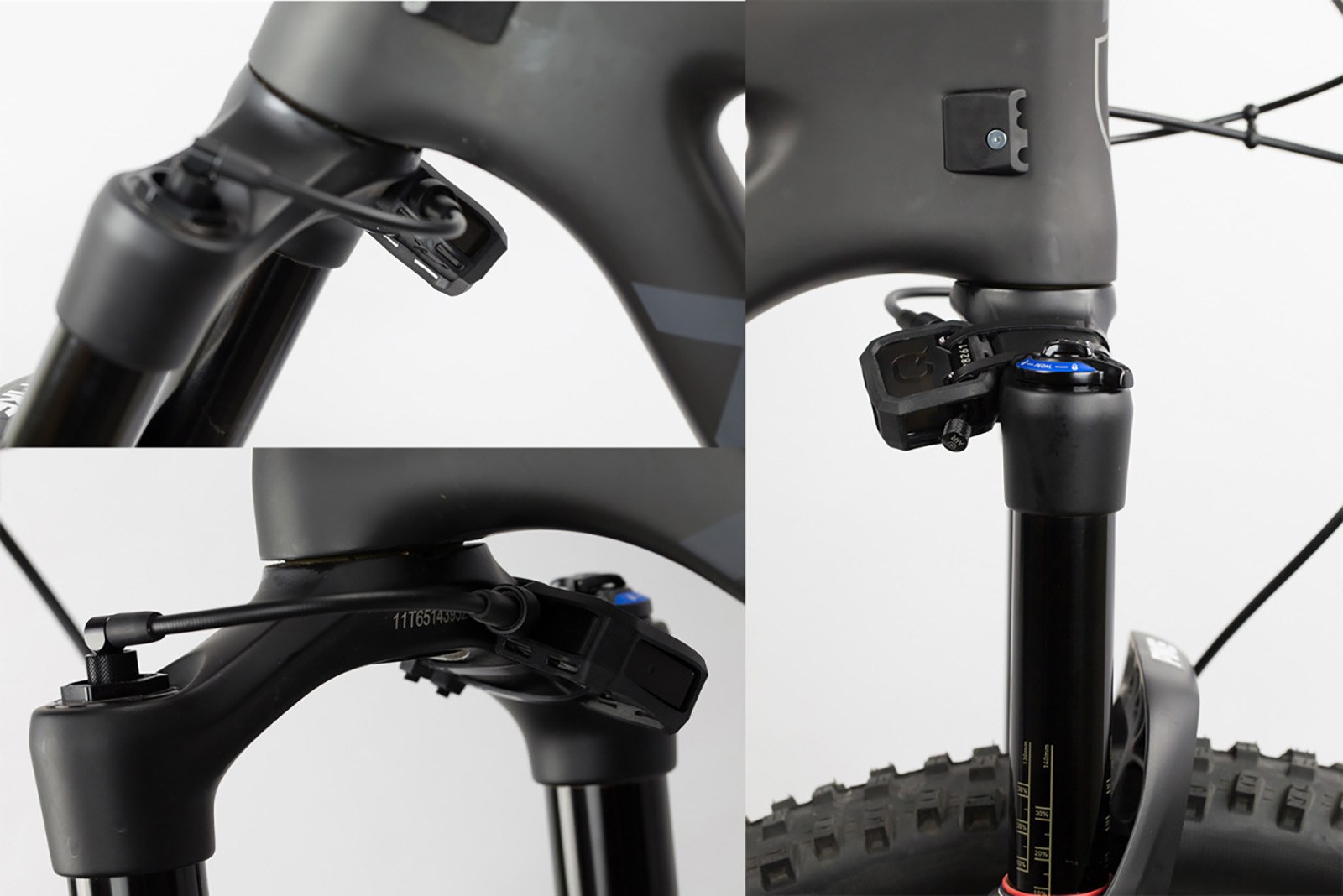 So low pro you could ride with it all the time and lord your optimal settings over your buddies. 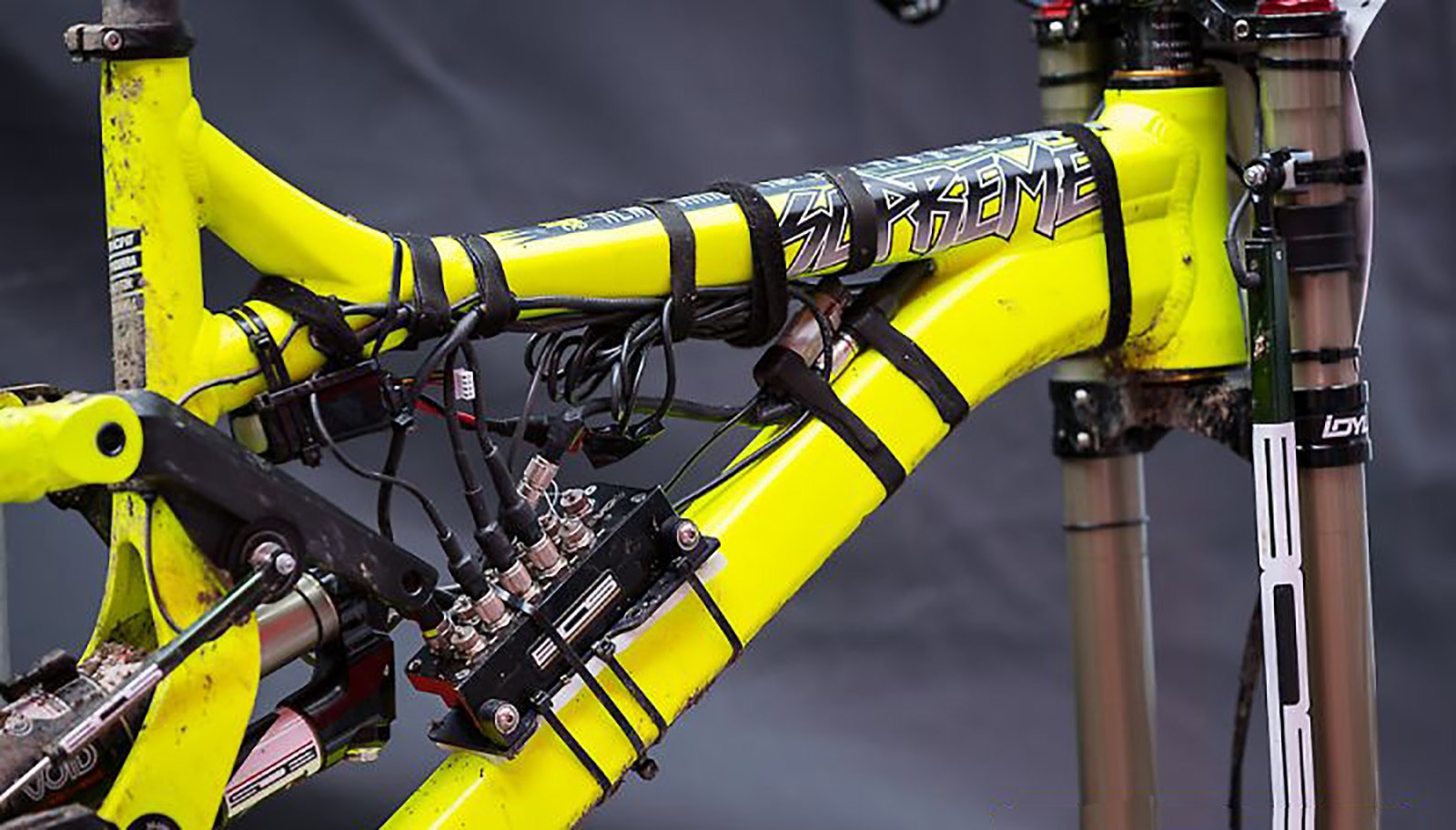 This system, attached to Remi Thiron’s bike, is slightly less user friendly and tidy than ShockWiz.

Part of the genius of ShockWiz is its simplicity. If you’ve ridden the Whistler Bike Park you may have seen suspension testing with more advanced telemetric gear attached. These systems use accelerometers with multiple sensors to evaluate suspension performance and, as a result, they are heavy and complicated. ShockWiz in contrast, is tiny and it appears very light. It attaches to your shock or fork’s Schrader valve to measure changes in pressure during various suspension events. Here it is in their words:

A high accuracy sensor samples the pressure in the shock or fork 100 times per second. By knowing the parameters of the spring (calculated from the calibration sequence), the pressure is converted into a percentage of travel. Using the percentage of travel, various algorithms process the travel data and look for ‘events’ such as large compression inputs. By analysing these events, ShockWiz can detect characteristics such as pogo, pack down or bobbing, and class their severity. If an undesirable characteristic is severe enough, or is persistently happening, then it will determine the suspension adjustment required to fix it and display this output via the smartphone app.

You can expect the app to get a facelift under SRAM’s guidance as well – but this will give you the idea.

Dusty Dynamics managed to fully fund ShockWiz, which will be branded Quarq, the Power meter company purchased by SRAM in 2011, via Kickstarter. 404 savvy backers pledged $133K AUD to get in early and these orders will be honoured. The rest of us will have to wait until later this year to put in an order as production ramps up at SRAM’s South Dakota manufacturing facility.

ShockWiz has some competition in SussMyBike. Here are diagrams of the two mechanisms. Top Case (at left) – waterproof enclosure containing the CPU with bluetooth, magnetic sensor and accelerometer/gyro. Bottom Case – at right – containing the draw wire encoder mechanism. This is the high speed retractable cable that mirrors the movement of the fork or shock.

ShockWiz isn’t the only company trying to demystify suspension setup using your smartphone. SussMyBike has their own Kickstarter campaign. The company, based in Edinburgh, takes a different approach by using an accelerometer and two sensors attached by a cable. The sensors are mounted on opposite ends of the fork stanchion or shock shaft and the cable mechanism mirrors and records the movement of the suspension. An advantage of this method of data collection is that it will work with coil shocks as well (or even elastomer!).

Beyond just setup, ShockWiz claims to be able to give you information about the health of your shock and it will also measure your air time off jumps. I am not kidding. This will be massively useful when bragging to your friends about the huge gap you cleared and will almost certainly be used to break ties at Red Bull Rampage.

Job one for SRAM will be to fill the 404 orders placed during the Kickstarter campaign but after that they may have other plans. It may be possible to integrate this system into future suspension products giving you real-time feedback about shock performance, and perhaps an alarm that sounds when you are riding like a squid.

Want to take the guess work out of your high speed compression damping?

Telemetry is alive and well in F1, never has been banned

You CAN'T have modern F1 without telemetry.

Formula 1 still relies extensively on real-time telemetry. Only two-way telemetry was banned in 2003 (basically the pit wall, or bunker back at the team's home remotely setting things on the car), but F1 wouldn't be what it is today without streaming telemetry from the cars, which is critical to setting up, tuning, and in some instances driving the car in race conditions.
Considering that weight penalties in F1 to carry that kind of equipment are non-trivial, the fact that it is still ran tells me everything I need to know about the value of telemetry data - provided it can be interpreted properly.

To me, the signal processing stack used to present such a simplified user interface is really what SRAM is buying, although the IP related to packaging accelerometers is also fairly useful. Practically speaking, the development and API related to knowing how to output those simplified parameters is going to be the most useful part, though further development is key… especially in the context of E:I type systems where real-time changes, modulated through user input can become relevant.