It seems the downhill bike market has been doing the opposite of the pedal friendly market the past few years. There’s been a fair amount of media coverage for new releases that are trying to drive the price of a DH bike down. Even in forks you’ll find options from Rock Shox, Manitou, Marzocchi, X Fusion, and SR Suntour all around a $1200 MSRP. This season, I’ve been given one of these to test: the SR Suntour Rux fork that Morgan provided a detailed observation on last October. My test fork replaces an old Boxxer Team that I’ve been on for a couple seasons. 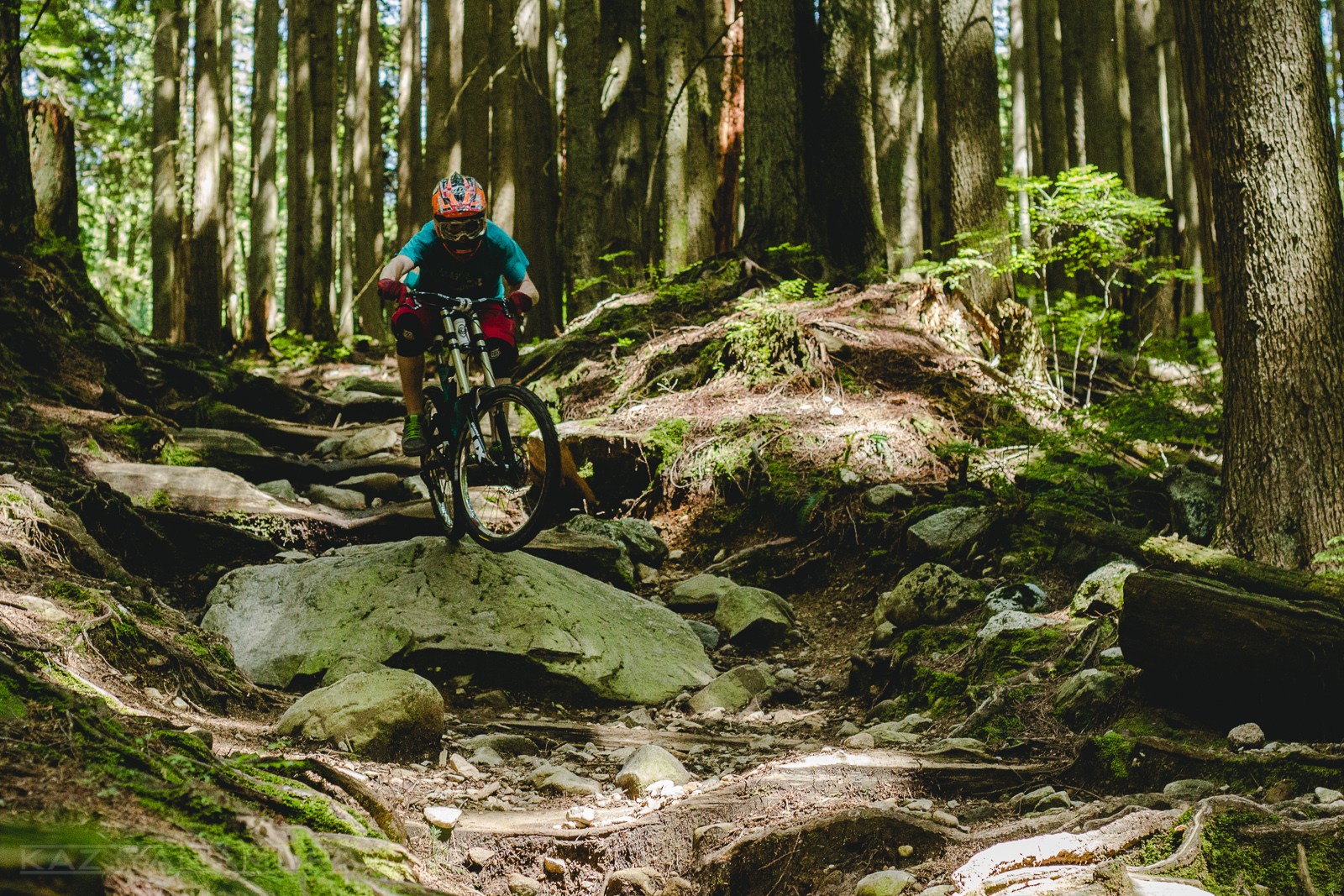 The Rux is SR Suntour’s 200mm freeride/downhill fork. It features an RC2 cartridge, adjustable air volume in the positive air spring, and a mechanical negative spring. It weighs in at 2890g (6.37 lbs) and has a $1200 USD MSRP.

My testing started after I had the internals updated in my early production fork. Initial impressions were great with the fork in the recommended settings. The owner’s manual gave clear instructions on how to set the fork up and I didn’t complain on my first few runs. However, during the first weekend on the Rux in the Sun Peaks Bike Park I discovered the air spring was very slowly losing pressure and the fork became a bit of a pain in the ass to test. I put up with it, having to go to the toolbox a few times to pump some more air into the fork when I forgot to check it before starting my ride. What I didn’t realize was that the air was escaping into the negative spring which adversely affected the performance of the fork, causing it to pack up on successive hits.

An e-mail to sales and marketing got me sorted. I was given some information on servicing the fork and told to rip it apart. I pulled the positive and negative air spring apart, cleaned them and lubed them. It did the trick; air stopped leaking out of the positive air chamber and the fork no longer packed up. Just to be certain the fork wouldn’t start packing up on me again I flipped the fork upside down and loosened off the bottom spring side nut to release any air in the lowers every so often. SR Suntour has added pressure release valves to current production models in order to make this step a little easier. 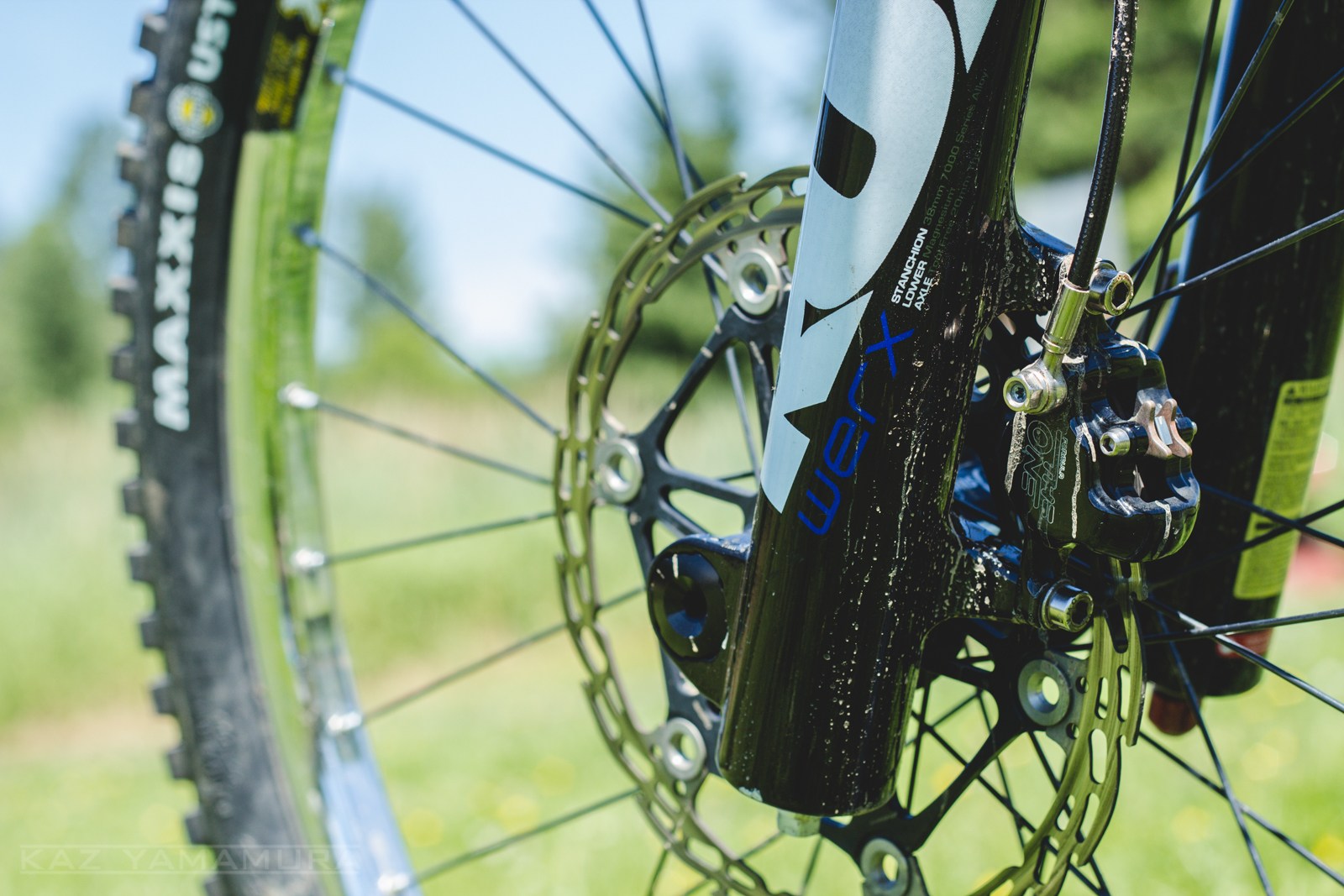 Post mount 200mm only on the Rux. This is something to take note of if you run a 180mm rotor on the front of your Freeride/Downhill bike. I can’t say that I’ve ever seen that set-up though, and I’m a fan of ditching the adapter.

I learned a few things about the workings of the fork when I had it apart. As I mentioned earlier, the Rux fork uses a positive air spring and a negative coil spring. The positive air spring allows for easier performance tweaks and an adjustable air volume to allow the user to adjust the spring curve. The mechanical negative spring is used to reduce the number of seals, increase simplicity, and ease serviceability. The 3 springs used in the negative spring are not weight specific. SR Suntour has only needed to make changes for riders running less than 40 psi in the positive spring as it’s not quite enough air to prevent the fork from being pulled down a bit by the negative spring (not allowing the rider to get full travel). Looking at the recommended air pressure guide, less than 40 psi would put you at under 120 lbs (55 kg) and probably on the less aggressive side from my experience with the recommended settings. If you fit that description, shoot SR Suntour an e-mail to see what they can do for you. 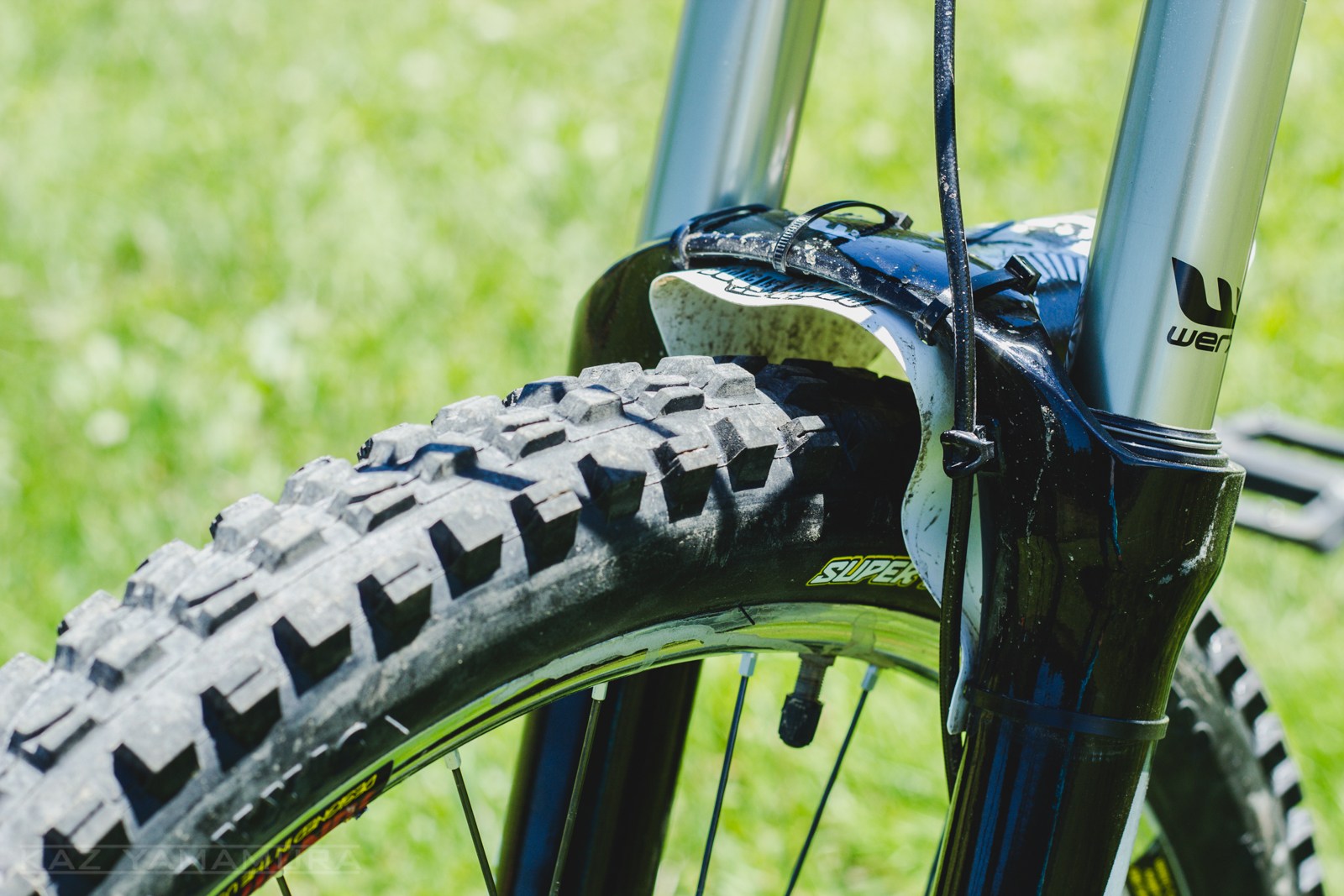 There’s lots vertical of clearance for my fender on the Rux. Another likable detail is the snap on brake hose clip. I shared one set of brakes between two bikes this summer so I liked that I could secure the brake line well after I had forgotten in the shop and was on the hill with no zap strap. 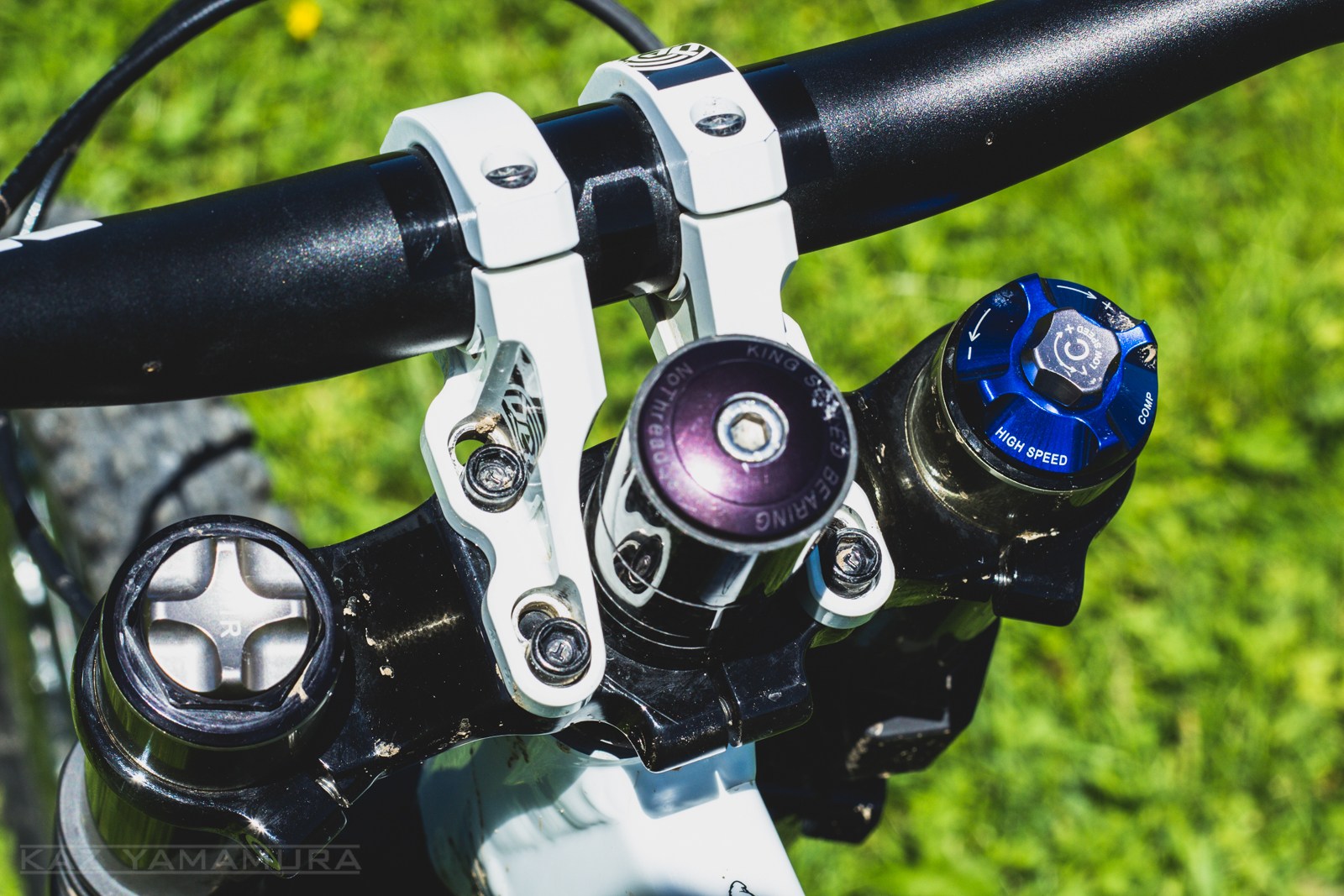 As you can see, trail side changes are pretty easy with the Rux as long as you have a shock pump. Rebound and compression is all easily accessible too. You’d probably want to at least get to the bottom before pulling out the air spring and adjusting the number of air volume spacers in the fork though. Also note that SR Suntour chose to go with a standard direct mount bolting pattern. This is the same stem I was using on my Boxxer.

Another thing I learned in my re-build process is that SR Suntour has a Quick Service Product (QSP) philosophy. They design with simplicity, durability and reliability in mind to put out easy to service/tune products. The goal is to have the consumer riding more and wrenching less. The difference that it made in the RUX compared to the other fork I’ve serviced is that the RUX isn’t designed to use an oil bath. To restate this, they don’t put oil in the lowers at the SR Suntour factory. This makes removing the lowers a faster and cleaner job, allowing riders to clean and re-grease more often (recommended every 50 hours). That being said, a bit of light weight oil in the lowers won’t hurt the fork and could make things run more smoothly if you store your bike at 90 or 180 degrees. 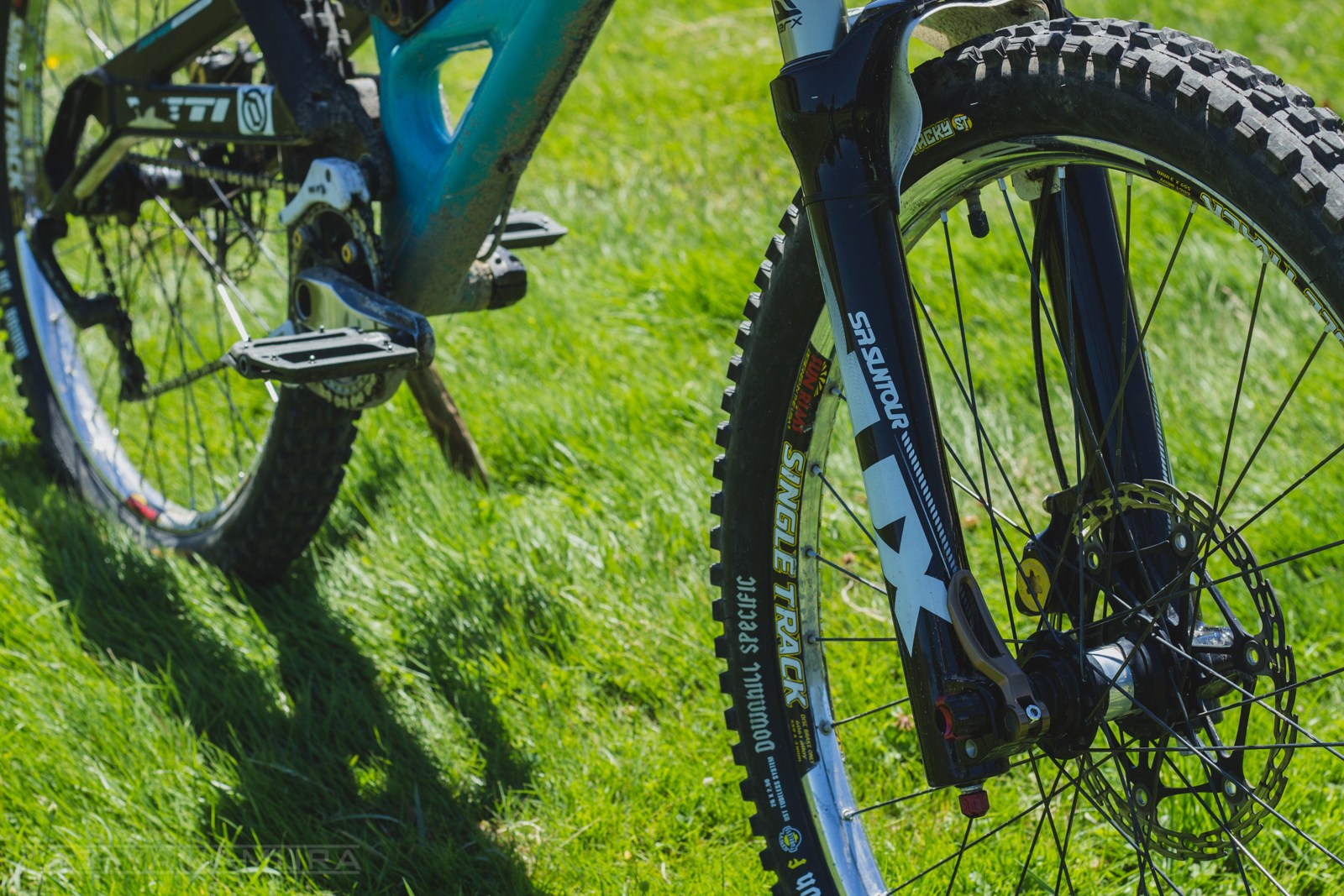 Here we can see SR Suntour’s 20mm tool-free thru axle. The red bit is a retractable lever that pulls out of the axle to tighten’r up. It was very difficult to pull out until I greased it – so make sure you do that after the first time. This system should allow you to remove your front wheel without any tools, although I often had everything as tight as I could to prevent the front wheel from coming loose, so loosening it on purpose wasn’t easy. A tool required system would probably work better for me.

Having always run an oil bath, I rebuilt the fork with 5cc of 2.5wt in the cartridge side and 10cc of 2.5wt in the air side. The fork felt buttery when all was said and done. It surprised me that my air fork felt better than my old coil. I settled on 3 of 5 air volume spacers, 70 psi, and close to the baseline cartridge settings (maybe a click or two off here or there). 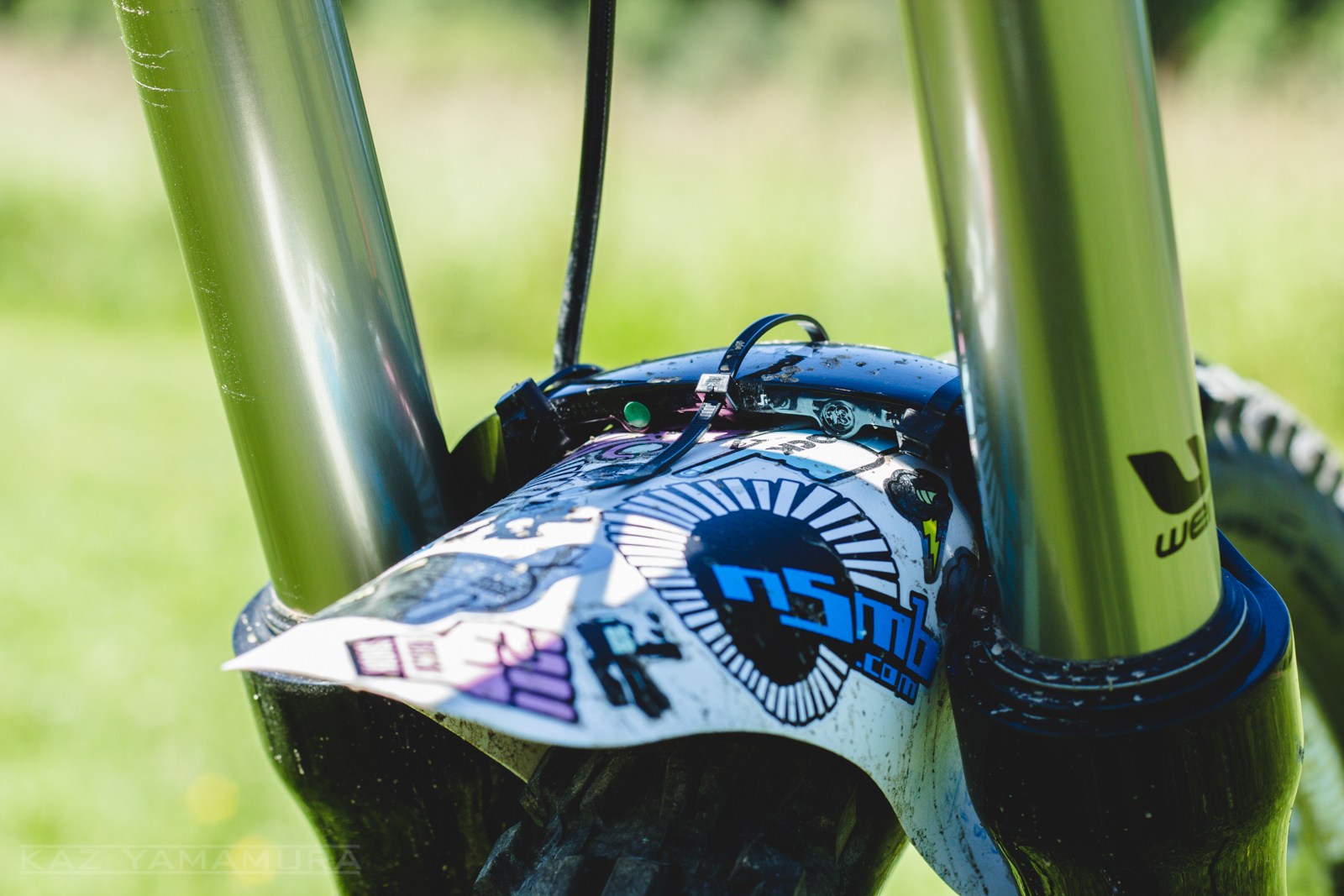 No arch ribs to get packed full of mud on the Rux. The arch isn’t very tall, but it is quite wide. With dimensions that differ from the norm, the fork still accommodates a fender with the holes in the standard locations.

With this set-up I seemed to find the right balance between small bump compliance, compression control, and ride height. The fork didn’t pack up on repeated hits, and smoothed out brake bumps and root strewn trails instead. My hands were happy to hold on in the park all day aboard the RUX, and the ride height was just high enough to keep me happy. In a perfect world I wouldn’t have minded it a touch higher, but the fork was performing so well I didn’t care enough to play with the settings any further. 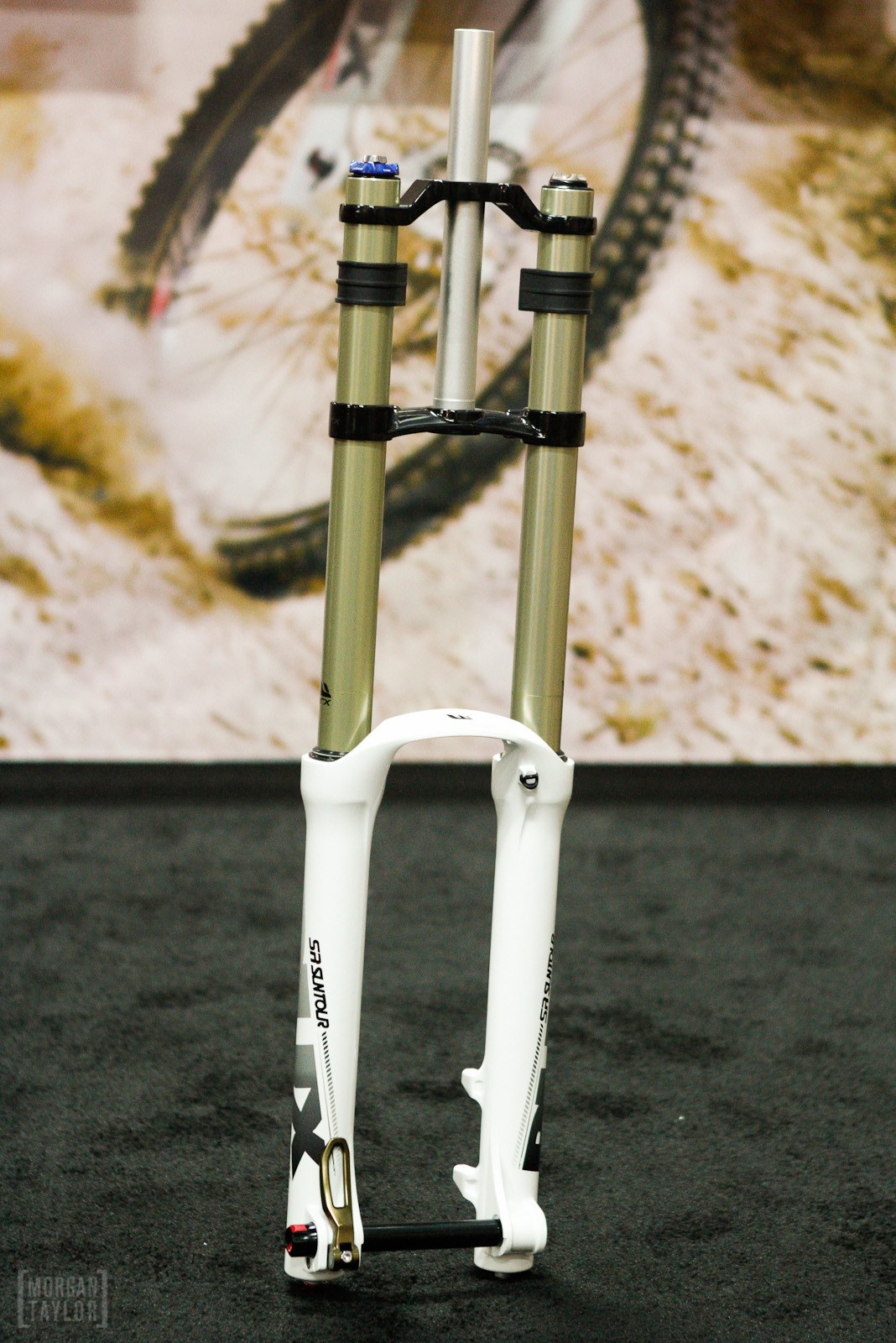 A Rux in white clothing.

Being able to tune the spring curve with air volume spacers and tweak things even further with the high speed compression meant the fork handled compressions just the way I wanted. For me, this meant using most of the travel on large hits, but saving the last little bit for when the confidence was way up and I was looking to bruise an ego. Those looking for a more linear fork would be able to set the Rux up to their preference using fewer air volume spacers. 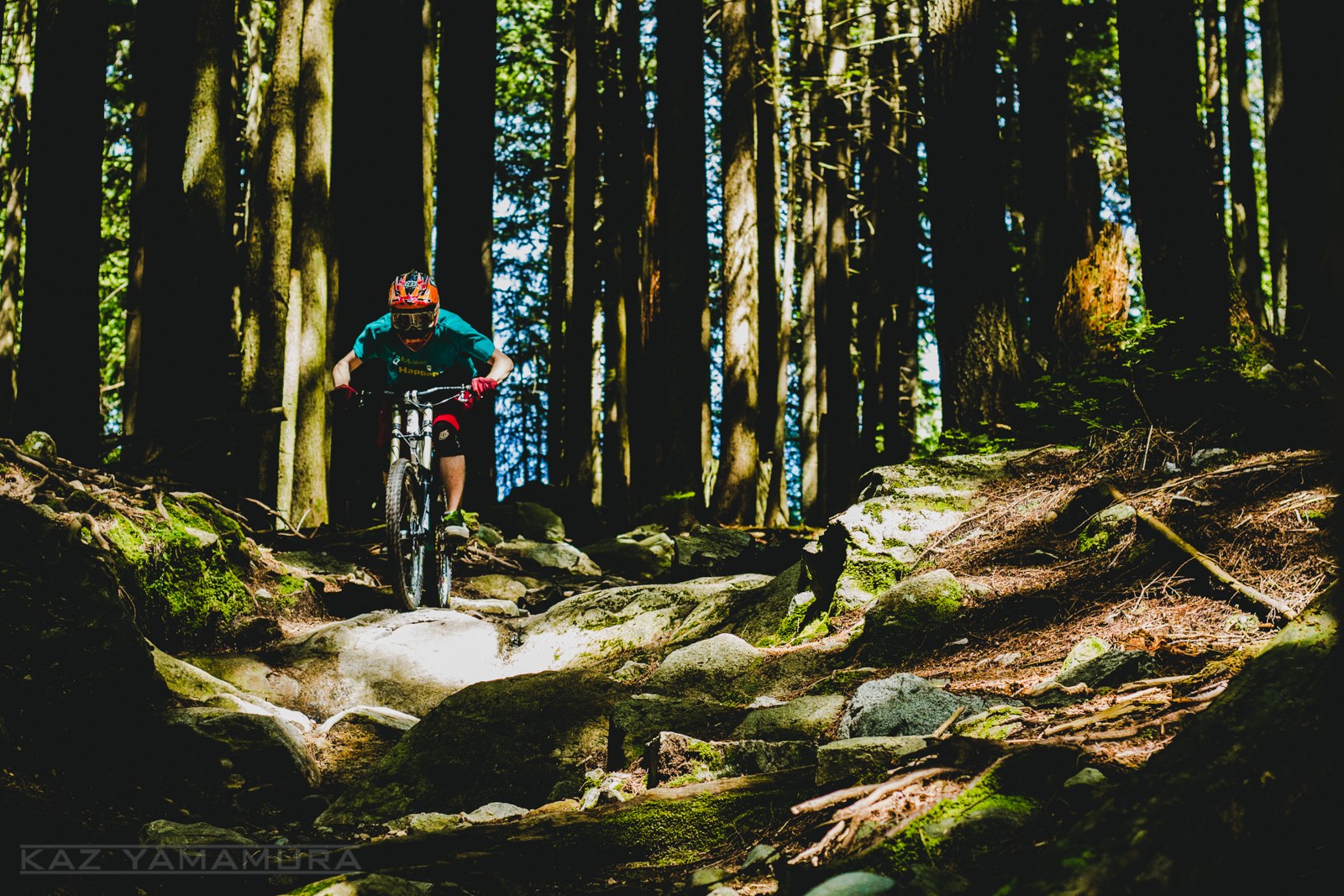 Rebuilding the Rux was easy, and I after I did so the fork felt really good. Providing adjustments for high and low speed compression, rebound, and the air spring curve allowed me to set up the fork with excellent small bump compliance, superb big hit control, and a reasonable ride height.

All in all the SR Suntour RUX features enough adjustments to suit your riding style. I was surprised that I actually used (and understood) all of the adjustments, and how well the fork performed once I set it up. It’s small bump sensitive, it can be progressive or linear in compression, and the ride height can be balanced between these adjustments. My favourite aspect of this fork is the fact that I can easily service it myself. Recommended maintenance isn’t overly frequent, and given that the fork can be run without oil in the lowers, I don’t expect the Rux to intimidate even amateur mechanics (there are far fewer tools required when there’s no oil involved). With a $1200 MSRP, SR Suntour gives you a great fork for the money.

Are you looking for a reasonably priced, low maintenance dual-crown fork? Maybe this is the one.

I was a Different Bikes in North Van yesterday picking up some brakes and they had two of these on for $650. Pretty smoking considering the review above, makes me want to try the Rux but I've been so happy with my 888's that I'm not itching to give it up.

I think next time I have a warranty issue, I'll lie and say I'm writing a review for a bike website, ask them to overnight it.

Have you had a warranty issue with SR Suntour? I'm curious if there's a specific story behind this comment.