There doesn’t seem to be a category Specialized won’t tackle. Their ever-expanding product line slowly but surely fills in the blanks. While shoes have been a staple since 1988 Specialized haven’t previously established traction in the gravity, freeride or AM markets. (Enduro!) 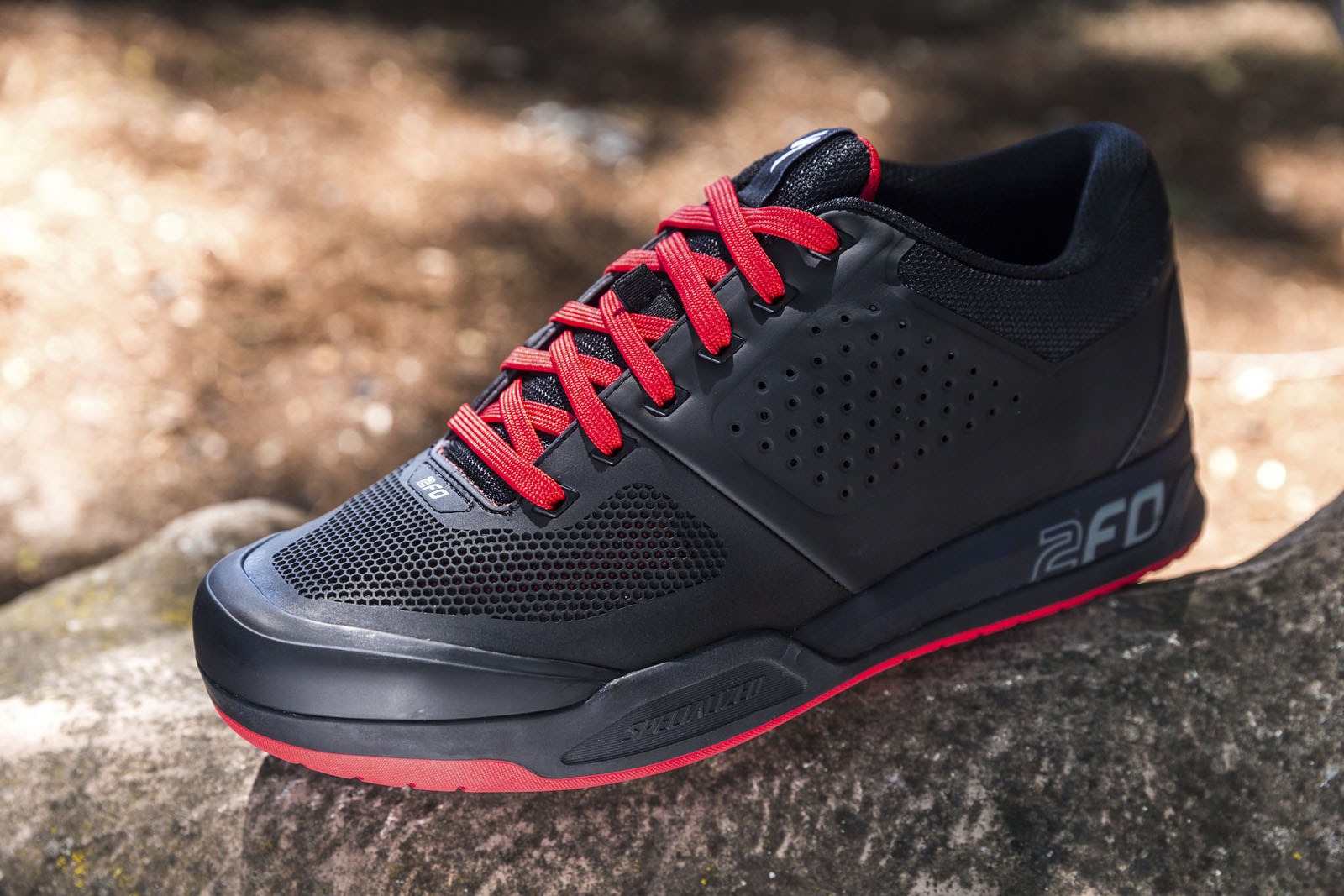 A shot of the clipless pedal version. Only the red sole distinguishes the cleated version from the flat. Flat versions all have a black sole.

Job one was to cook up some special rubber. Specialized enlisted Wolfgang Arenz, the mix maaster for Specialized tires, to conjure up his black gold for the 2FO models. Pin penetration was the focus for the flat shoe while getting re-attached was the goal for the clip version. The soft rubber that resulted was christened Slipknot. 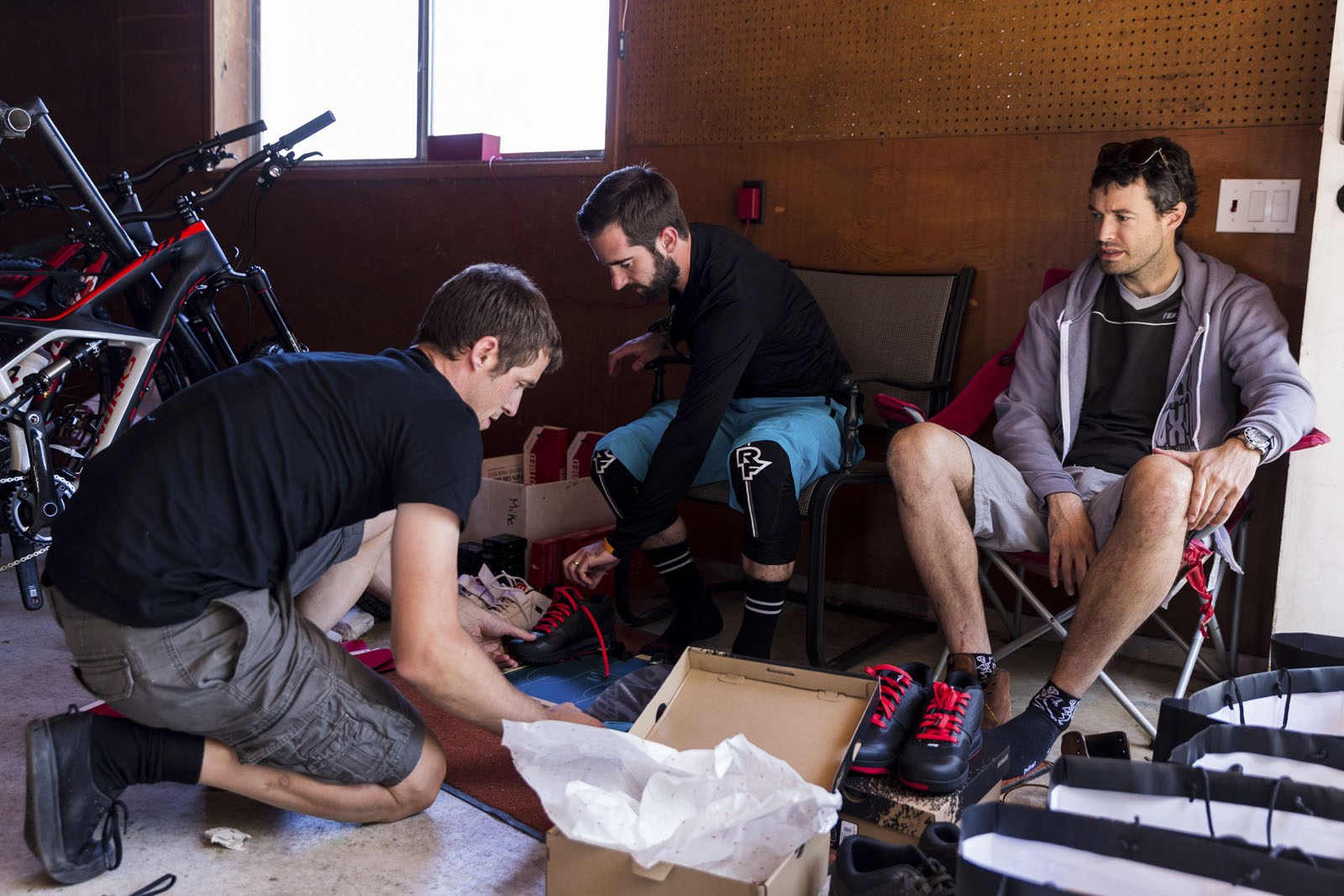 Journalists being fitted with new shoes.

The upper design was geared at fostering air circulation and preventing water absorption (but not penetration) – goals that align well. Much of the upper consists of airmesh, the same material used in auto seats. When testing competing shoes Specialized told us that some took on 400-800 grams of water during wet weather use while the 2FO models max out at 200g. 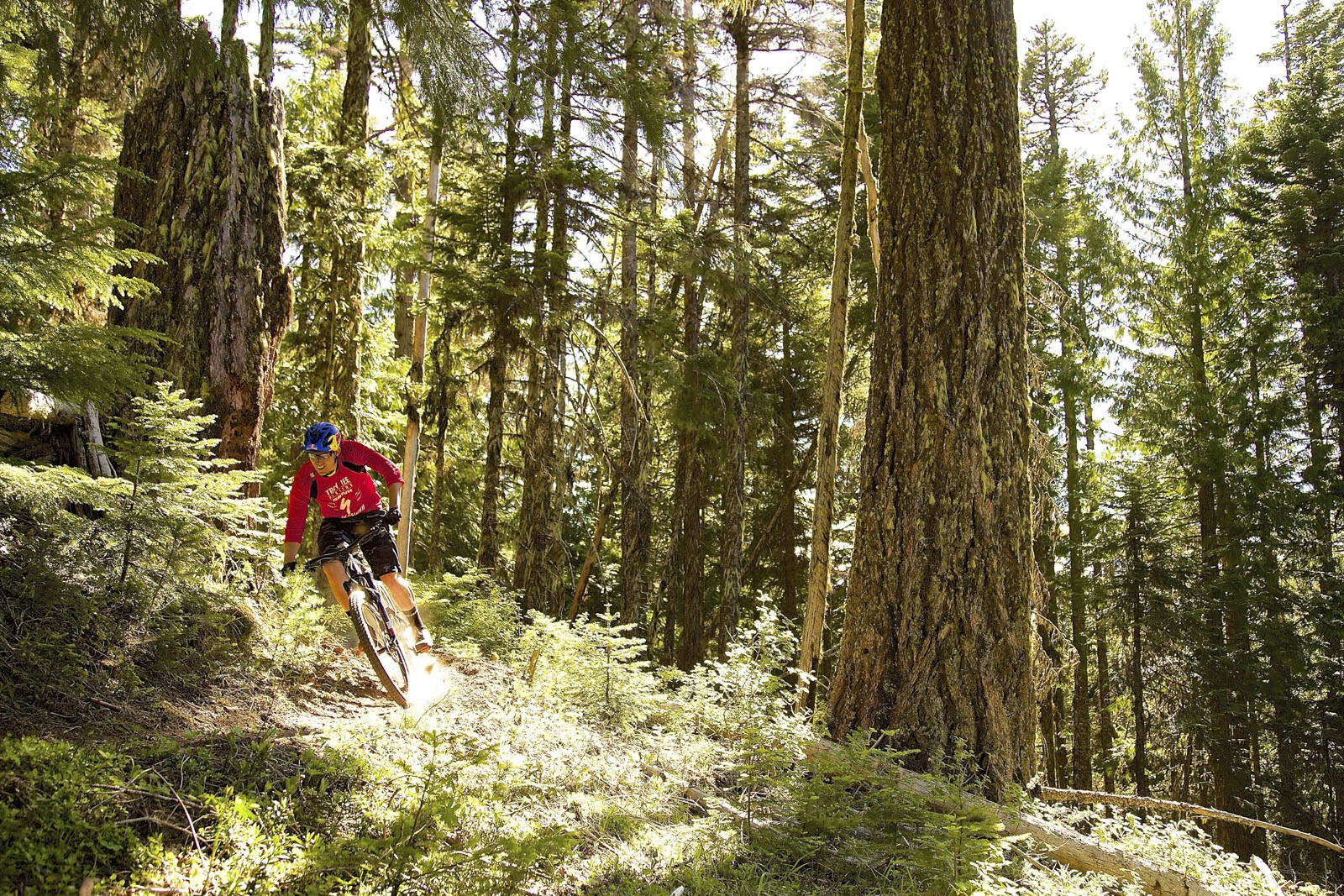 Curtis Keene warming up before winning the Oregon Enduro Series race a few days later. Curtis and Aaron Guin were both involved in developing these shoes.

Clipless Model To facilitate getting in and out quickly the clip version incorporates what Specialized is calling the ‘landing strip.’ Higher durometer rubber surrounds the cleat pocket for this purpose. The pocket itself is shaped to guide your cleat home, tapering toward the middle on both ends so that once you have found the channel the rest is easy.

The pocket itself is quite long, equal in length but substantially narrower than the new Five Ten VXi clipless. Despite this similarity the mount slots are shorter. This likely won’t turn out to be an issue for the target market because rearward movement is about equal; all you lose is the ability to position your cleat further forward than most riders would ever choose. The 3/4 nylon plate in the ‘pedalling zone’ of the EVA sole is designed to allow for comfortable walking without compromising efficiency. Overall the shoe is quite stiff considering its target market, emphasizing performance just ahead of comfort. Flat Pedal Model The flat pedal model is the closest to Five Ten grip I’ve encountered from another shoemaker. They aren’t quite as sticky as the original Impacts, the grippiest Five Ten model, but they compare well to other models like the Spitfire or Freerider. If you like max grip you’ll want to pair them with a barbed and angry pedal. If you prefer to be able to re-position your foot without sitting down then just about any pedal will do and you can remove pins to your taste. The rubber has what Specialized calls a ‘directional sharktooth profile’ to provide increased grip when your heels are down.

These are your colour choices if you prefer flats.

The sole may be a little more robust than some flat riders are used to. The interface doesn’t give you draped over the platform impression like an old pair of vans. The tradeoff is that generating power, both climbing and descending, is maximized. 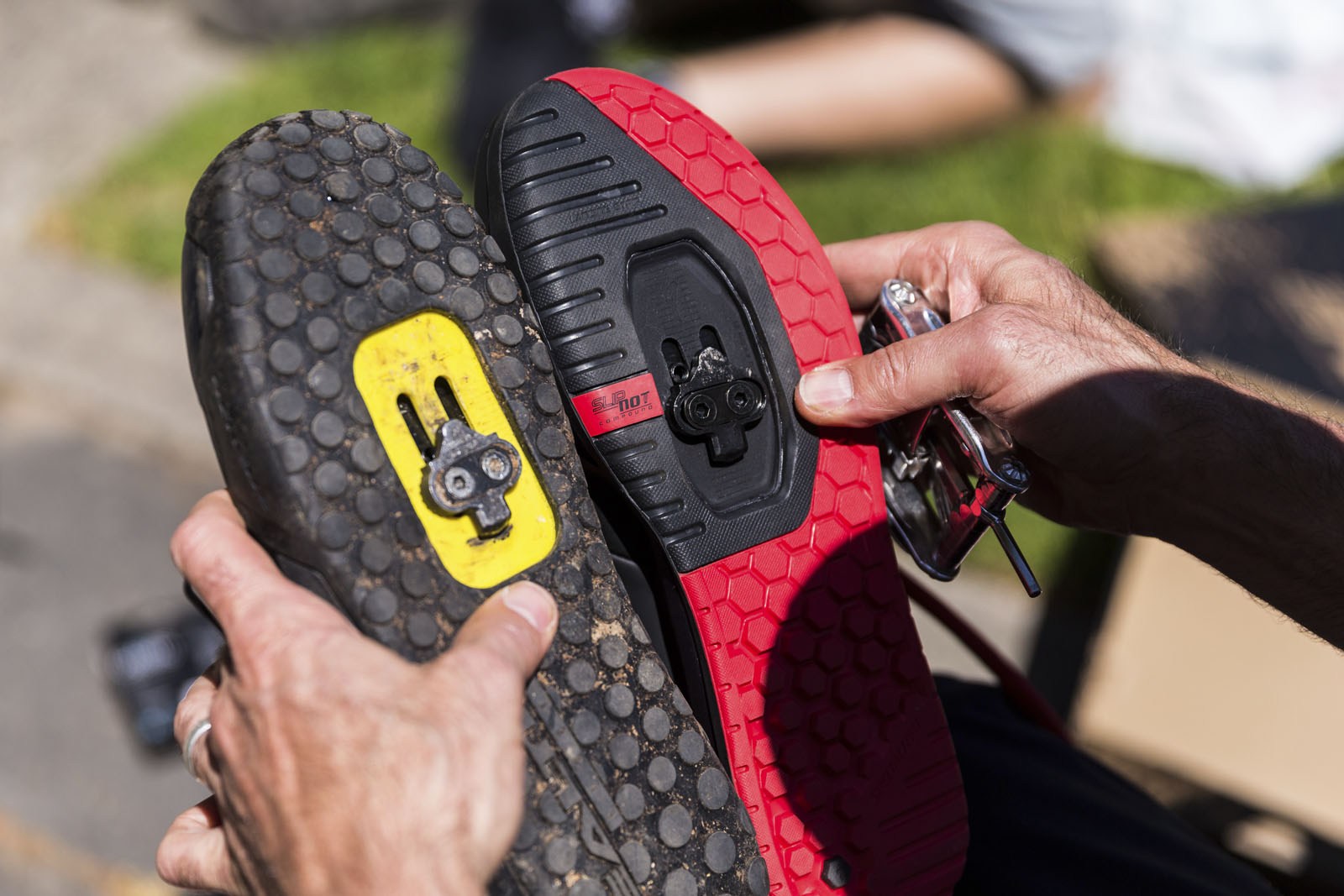 Setting up my cleats by matching the placement on the shoes I brought to the event – Five Ten VXi. The differences between the cleat pockets are easily seen. I found the narrow, shaped channel of the 2FO guided my cleat back into the pedal.

Both shoes are comfortable to walk in and I liked the fit. They aren’t wide and flat in the toebox like some others and overall the fit is on the narrow side. Support is good with a dual density Body Geometry insoles cupping the heel and cradling the arch. 2FO Clipless – 450g per shoe (claimed) $180 USD 2FO Flat – 395g per shoe (claimed) $130 USD

Do you clip or do you click? Whichever you do, would you do it in these?

I need these. These look solid. I never understood why S doesn't bundle shit, given they make almost the entire bike. For example, buy an Enduro and get a free set of these shoes. Greedy f-ers.

Want these now!! Any word on release date?

Pictures of the bottom of the shoes for flats?

I'm working on answers to sizing and availability questions. Thanks

Sorry Tim. I guess I just posted these on FB or something?