Switzerland’s Alessandra Keller and Spanish veteran David Valero Serrano proved to be the mud masters and both claimed their first-ever UCI Cross-Country Mountain Bike World Cup wins in horrendous conditions at the Snowshoe resort in West Virginia, USA. Here is all you need to know:

After finishing a season’s best second place in the scorching heat and dust of the previous round in Andorra, Valero went one better in conditions that couldn’t haven been more different in Snowshoe. Torrential rain turned the course into one of the most demanding seen on the World Cup circuit for some time, pushing riders and bikes to the limit. Early pace-setter Alan Hatherly had the opportunity to take over the overall World Cup lead after Nino Schurter was forced to sit the race out following a heavy fall in Friday’s XCC race. However, the South African also crashed hard on Lap 3 whilst fighting American Christopher Blevins for the lead, which put him out of contention for a podium place. Blevins, winner of the XCC race, assumed the lead until a rear puncture on Lap 4 forced him to make a pit stop for a wheel change. This handed the lead to Lenzerheide and Andorra race winner Luca Braidot and Tituoan Carod, but Blevins charged right back to leading group by the early stages of Lap 6. The man on the move however was Valero, who timed his race to perfection. Starting slowly, he set increasingly fast lap times as he rode through the field from outside the top 10 and as his rivals began to pay for their earlier efforts during the final two laps, the Spanish rider looked fresh. The final lap started with Blevins, Valero, Carod, Braidot, Felipe Colombo and Luca Schwarzbauer bunched together in the fight for the win. A long range attack by Belvins momentarily opened up a gap and a home win looked possible, but the American couldn’t sustain it and when Valero then attacked on the final third of the lap, no one could match him. He crossed the line victorious by five seconds over Carod, while Braidot out sprinted Belvins for third.

“It’s incredible to finally win a World Cup,” said Valero. “The track was extremely difficult. The downhills especially were very complicated with the mud on all the rocks and roots, incredible conditions really.”

The women’s race saw a brilliant back and forth battle in ever-worsening conditions between Alessandra Keller and Jenny Rissveds, with a last lap fall from Rissveds and formidable turn of pace from Keller securing the Swiss former U23 champion her first Elite XCO win in impressive style. A number of top contenders were again missing from the race, including Loana Lecomte, Pauline Ferrand-Prévot and Laura Stigger, but Kate Courtney returned to action for her home race. At the front from the very start, Rissveds and Keller were joined in the early laps by Andorra winner Anne Terpstra, Jolanda Neff and a trio of US riders – Courtney, Hayley Batten and Savilia Blunk. Rissveds, Keller and Terpstra quickly dropped the rest and as the rain began to fall on Lap 4 an attack by Rissveds broke Terpstra. The final three laps saw Rissveds open a gap on every downhill or technical section and Keller fight back with incredible power on the uphills. As the final lap began in torrential rain, leader Rissveds fell on the first off-camber grassy turn and that was all the invitation Keller needed. Attacking all out, she found new reserves of speed to race home and win by an incredible 37 seconds over Rissveds.

“The muddier it got, the better I got and somehow I won the World Cup,” said an elated Keller. “This season has already been great with a short-track win and now this first XCO win is crazy. I’m really happy.” 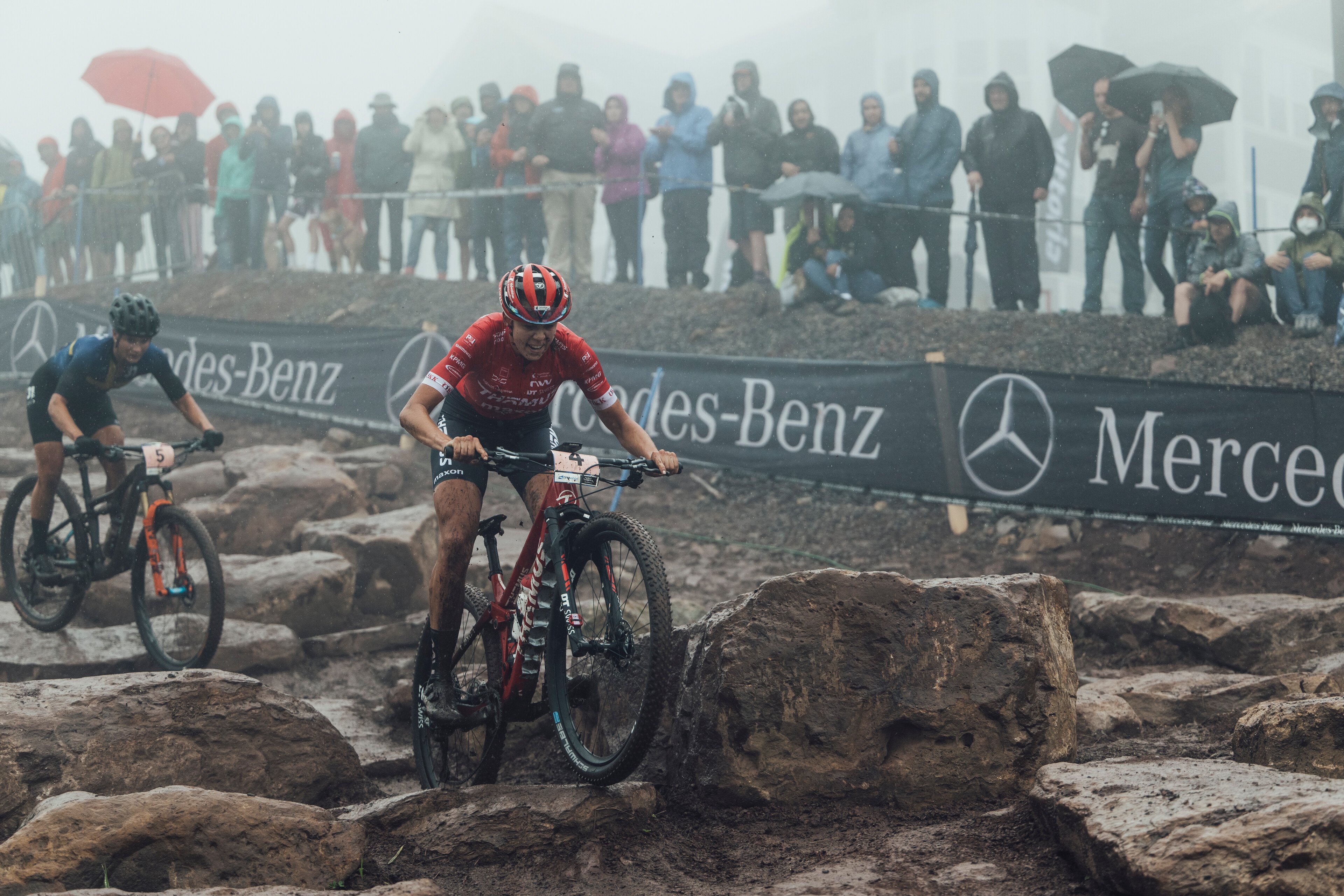