UCI Mountain Bike Downhill World Cup overall points leaders Camille Balanche and Amaury Pierron extended their respective points leads with victories in a muddy and difficult race at the Snowshoe resort in West Virginia, USA. Here is all you need to know:

After finishing third in the previous Andorra round, Balanche was looking to stretch her lead over title rival Myriam Nicole and the wet conditions that greeted riders in Snowshoe played to the strengths of the precise Swiss racer. A dominant win in qualifying by almost 10 seconds put Balanche on the front foot for the race and she didn’t put a wheel wrong as the last women down the mountain. Race day sunshine had dried out the open sections of the course, but in the rock-filled woods conditions remained incredibly slick and this is where Balanche won the race.

Clearing the most treacherous sections with a poise unmatched by any of her rivals, Balanche crossed the line in a time of 4m 28.585s to claim victory over Nicole by just over four-seconds. Fort William race winner Nina Hoffmann, Andorra victor Valentina Höll and Monika Hrastnik completed the podium behind Balanche and Nicole.

“It’s just such a relief to come down without a crash. It was so hard, though, super tough," said Balanche. "I like when the track is like that, I’m not going to lie. For sure, I have overall in mind, but I don’t want to change my strategy. Myriam is just behind me and it’s an amazing battle that will go down to the last race.”

After crashing whilst on course for a potential victory in Andorra, Nicole was flying during her finals run, but lost her front wheel and again fell just after the halfway point. Such was her speed however that she still slotted into second place by two seconds over Hoffmann In the Men’s race the winning margin was a much tighter 0.4s, but again it was the overall series leader and fast qualifier who came out on top as Amaury Pierron returned to winning ways after finishing off the podium in Andorra.

Earlier in the final, Canada’s Finn Iles and Brit Laurie Greenland laid down fast markers, but a steady stream of racers began to better their times until Austria’s Andreas Kolb produced a scorching run to go fastest with only five riders left. Neither Ronan Dunne or Loïc Bruni could better Kolb’s time, with Bruni cashing hard and being forced to retire with a broken brake, but Britain’s Bernard Kerr delivered a career-best run to beat Kolb by 1.3s with just Thibault Daprella and Pierron left to race. A crash took Daprella out of the running, but Pierron wasn’t to be denied and clawed back a deficit of almost two seconds on the second half of the course to take his fourth win of the World Cup season by 0.414s – only the fourth ever rider to do so.

Kerr, Kolb and Dunne celebrated their best-ever finishes in second, third and fourth, with Greg Minnaar completing the podium. 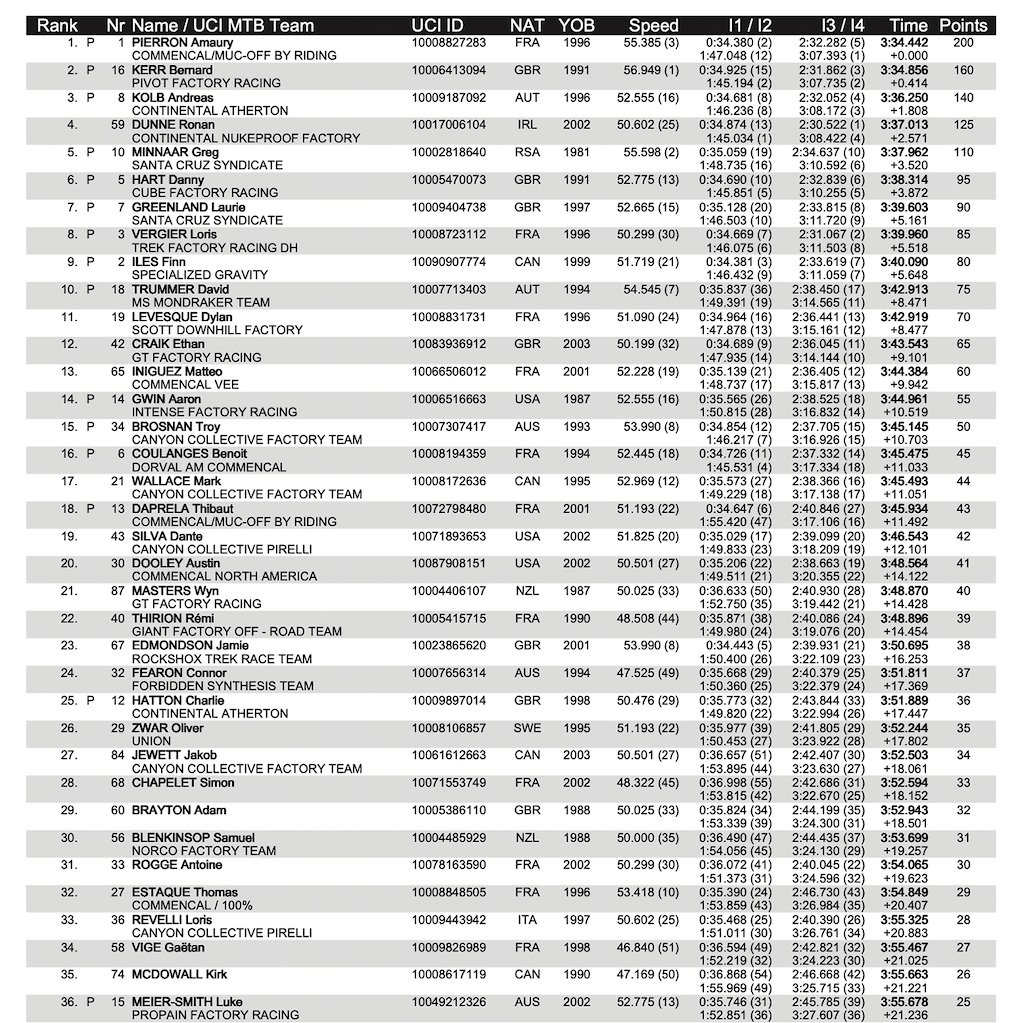 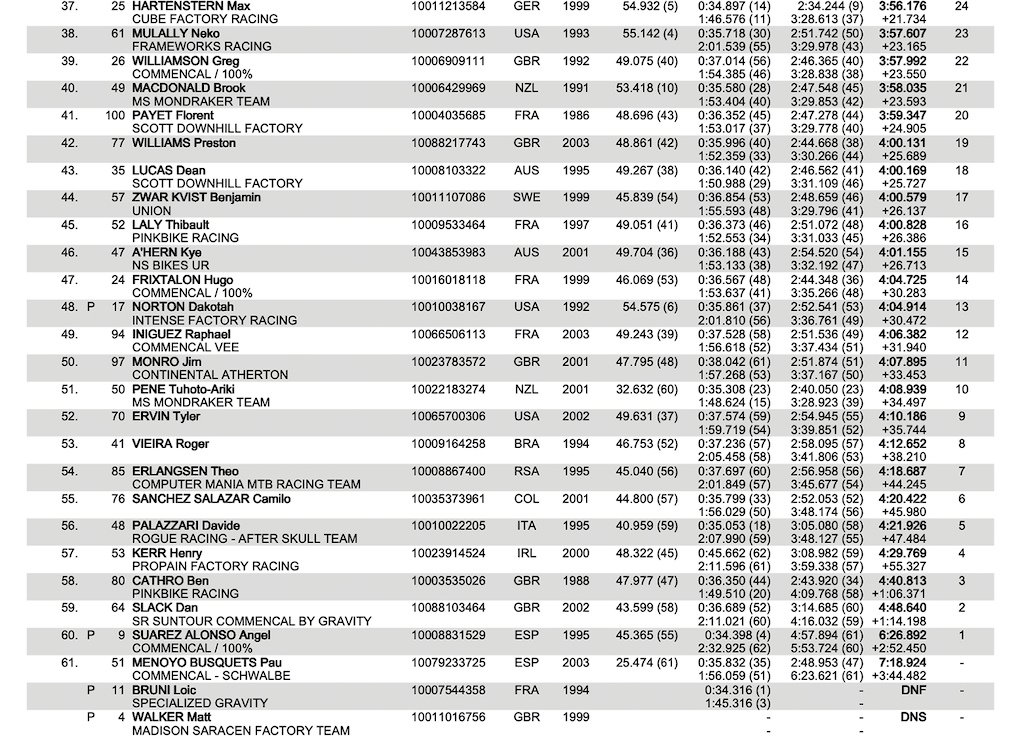 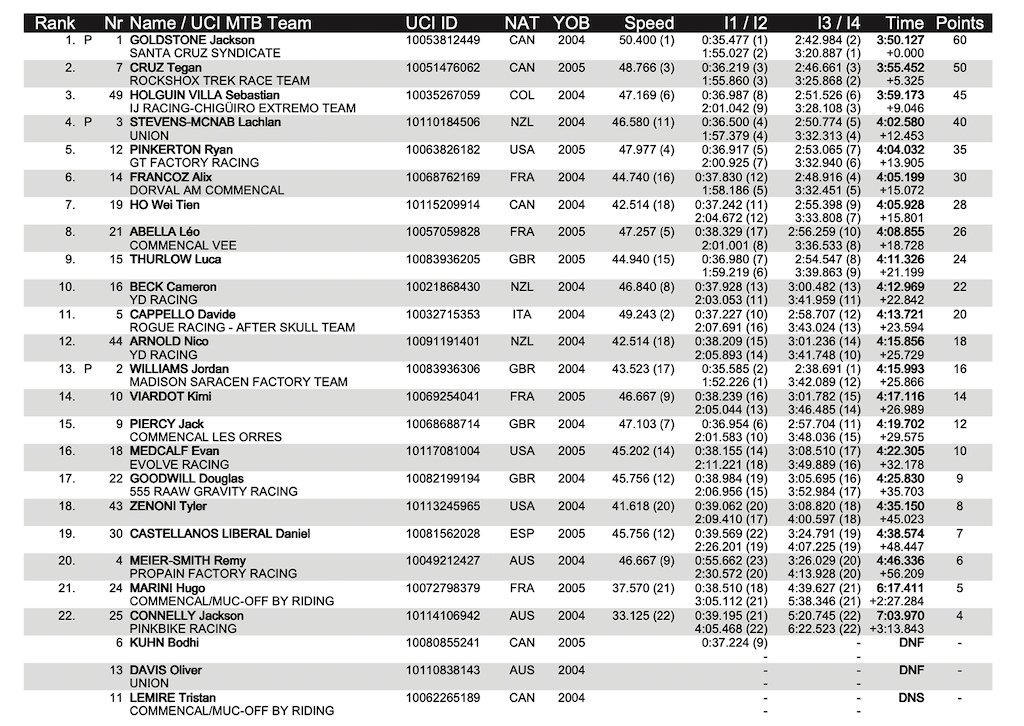