ROTORUA, New Zealand, March 29, 2015—Brett RHEEDER will be the first man capable of winning the new Triple Crown of Slopestyle and earning the $50,000 prize pot on the line for winning all three Crankworx events.

Clocking an unmatchable first run on a course with nine trickable features—which levelled many a rider, including the dominant force in Slopestyle, Brandon SEMENUK—Rheeder turned his second run into a victory lap, bringing friend and fellow Canadian Logan Peat along for the ride. 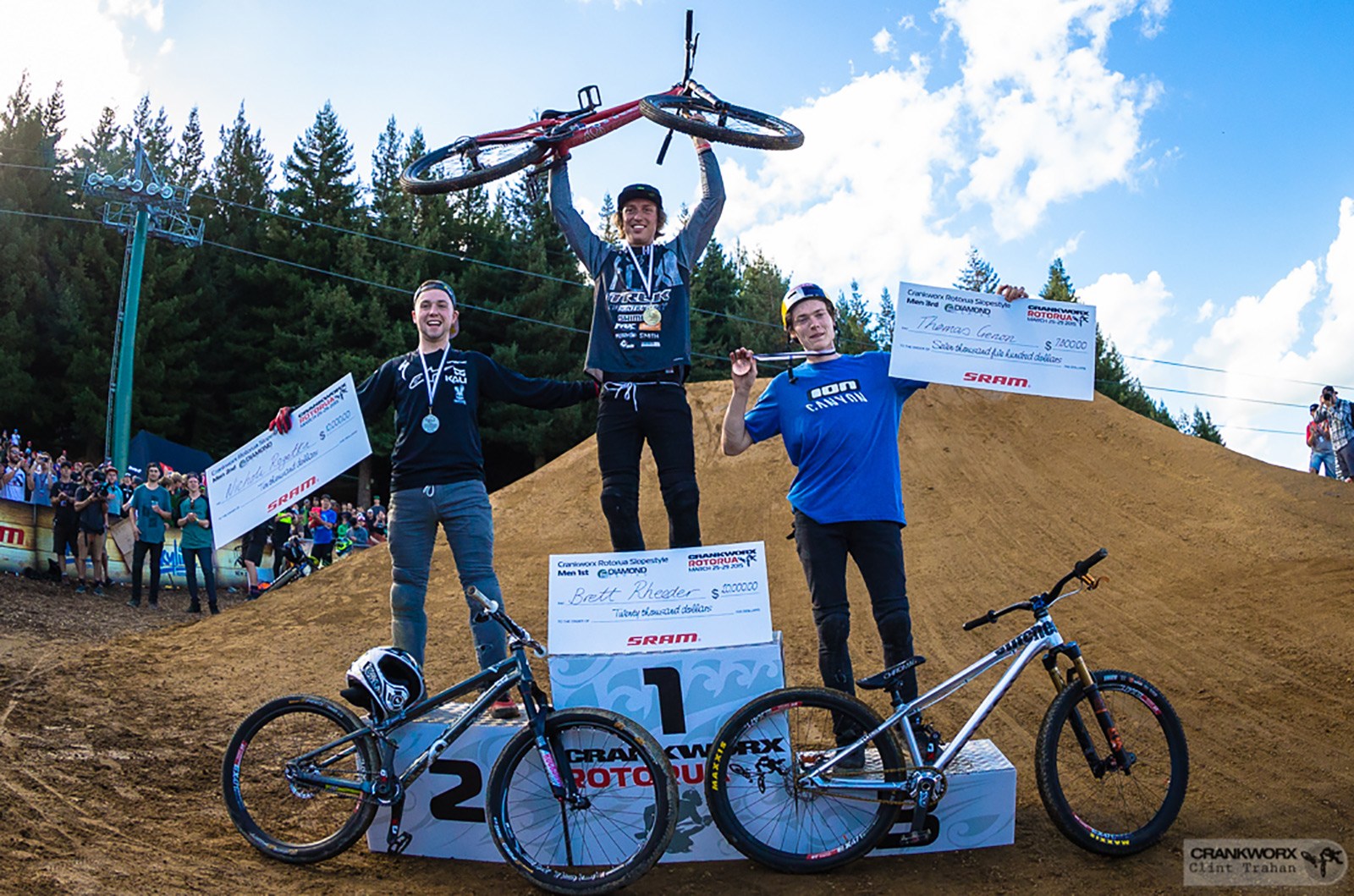 “I feel amazing. I don’t think anyone expected to land the runs, due to the conditions of today’s course. But just getting down to the bottom and having a victory lap – I’ve never had a victory lap before, so it’s pretty special right now,” said Rheeder.

The event was the opening round of the FMB Diamond Series and the first competition in the new Crankworx Triple Crown of Slopestyle, a season-long challenge to see if any rider can win all three Slopestyle events on the Crankworx World Tour.

Heavy rain closed the course for the first half of the day, pushing competition back by two-and-a-half hours. While the course was kept dry under tarps, it was nevertheless a slick competitor of its own, at one point levelling Carson STORCH, Brandon SEMENUK, Antoine BIZET and Paul GENOVESE, who bailed out on runs one after another, after another and another.

Rheeder will now have to win the Les 2 Alpes Slopestyle and Red Bull Joyride in Whistler.

“I think it’s going to be so insanely hard to keep winning these events, but I’ll just do my best, and if it ends up happening at the end of the year, that’s amazing,” said Rheeder.

Rheeder had big compliments for Kelly McGARRY, saying he was impressed with how trickable he and building partner Tom Hey had made the run.

“I really feel the course did come together well, it looks great and it rides great and the competition was really awesome,” said McGarry. “So we’re stoked to come back for next year.”

Nicholi ROGATKIN executed a perfect second run packed with tricks to finish in second with a backflip double tail-whip.

“I was in disbelief, you know. I pulled the exact run that I wanted and to see the fans appreciate that, and for the judges to be stoked on that, there’s really no better feeling,” he said.

By far and away, the trick of the moment for the competition was a cork-720, generating huge reaction from the crowd and prompting announcer Brad Jay to declare “the cork-720 is the new black.”

“The trick I was most happy with was the flip-360 on the last jumps and the opo whip on the step-up,” said Thomas GENON, third place finisher

What happened to Semenuk? Tough one to judge as well. How did the men in the tower do?