For this edition of the Sea to Sky Bike Check, I ventured out of the ‘Sea to Sky’ region, and into Kamloops. I had always wanted to shoot with Dylan Sherrard, but the 350km in between made it tough. When I went out to Kamloops on a riding trip with my buddies, I decided to see where Dylan was at, and see if we could connect for a bike check during the weekend. Luckily Dylan was a morning guy, so he was willing to come out to the bike ranch before he headed to work at 10:00am. With the promise of a fresh brewed tailgate espresso, it wasn’t hard to convince myself to head out there early as well.

Whattup Internets? I hope everyone is having a mellow spring and smashing the trails wherever you are. I’ve been having a blast – rippin’ and tearin’ my favourite lines in Kamloops and surrounding areas – and I’m feeling comfier than ever while cruising the trails on my fresh quiver of Specialized Bicycles. Check ’em out! 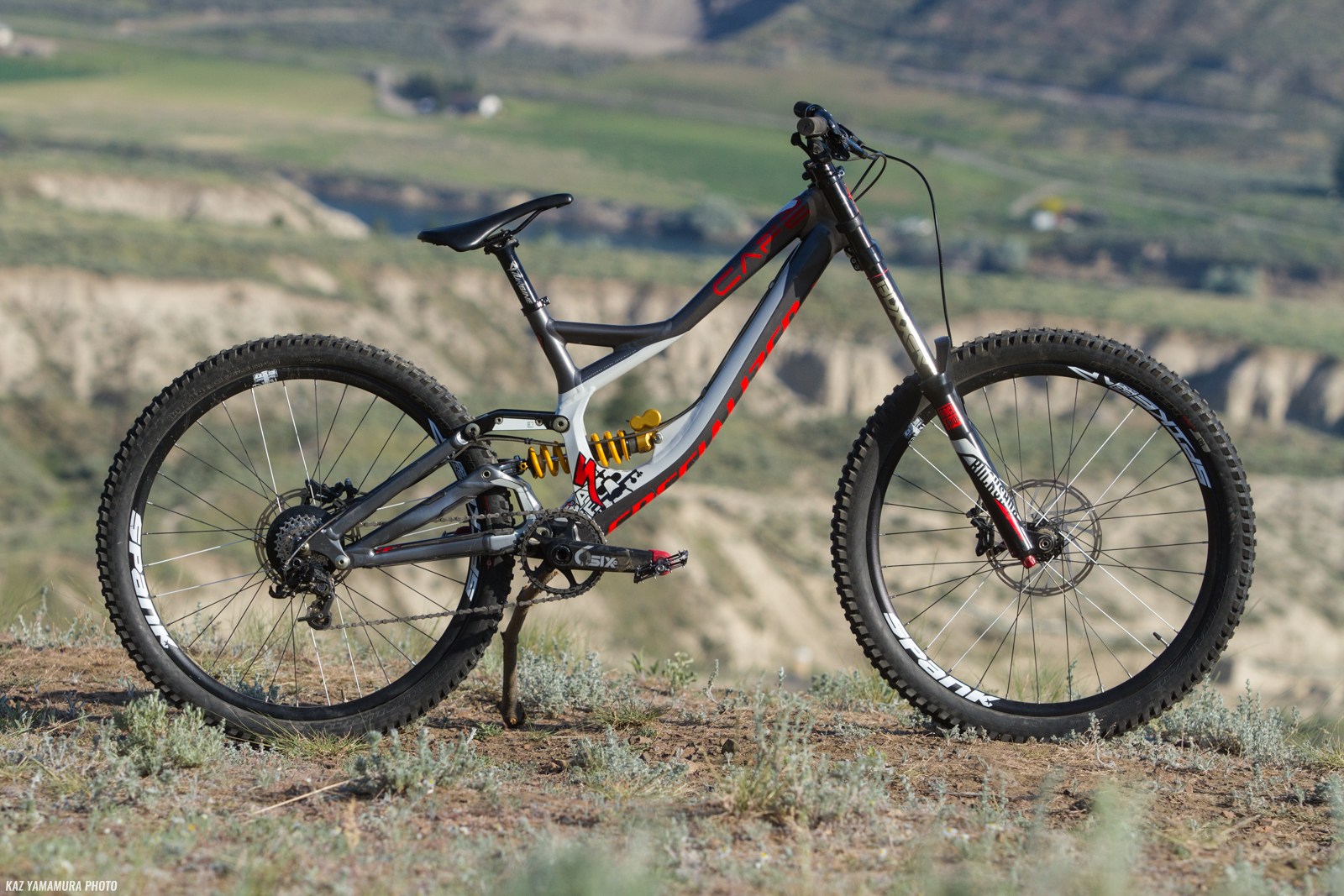 The first of Dylan’s 3 bikes is the 2015 Specialized Demo 8 650B II. Dylan says this bike is a party animal, making him learn to ride faster just to keep up with it. He runs the suspension plush, for blasting Sun Peaks Resort laps and brapping sideways off Kamloops Bike Ranch gaps. 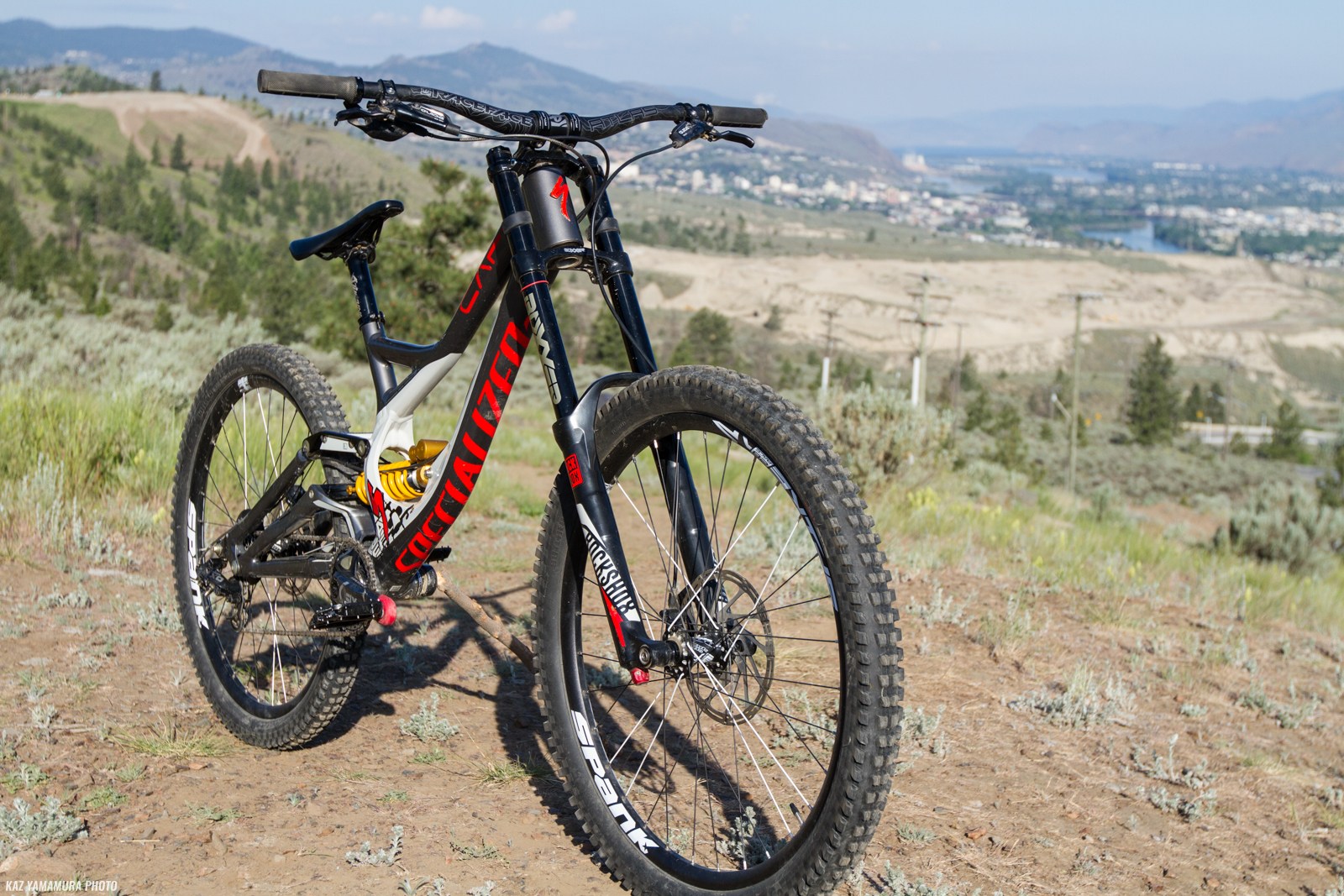 Up front Dylan runs a Rock Shox Boxxer World Cup. Dylan runs 80-100psi and 1-3 bottomless tokens, depending on what he’s riding and how he feels. To aid his big hits, whip-landers and hucks to flat, Dylan keeps the compression turned all the way up and the rebound mellow. 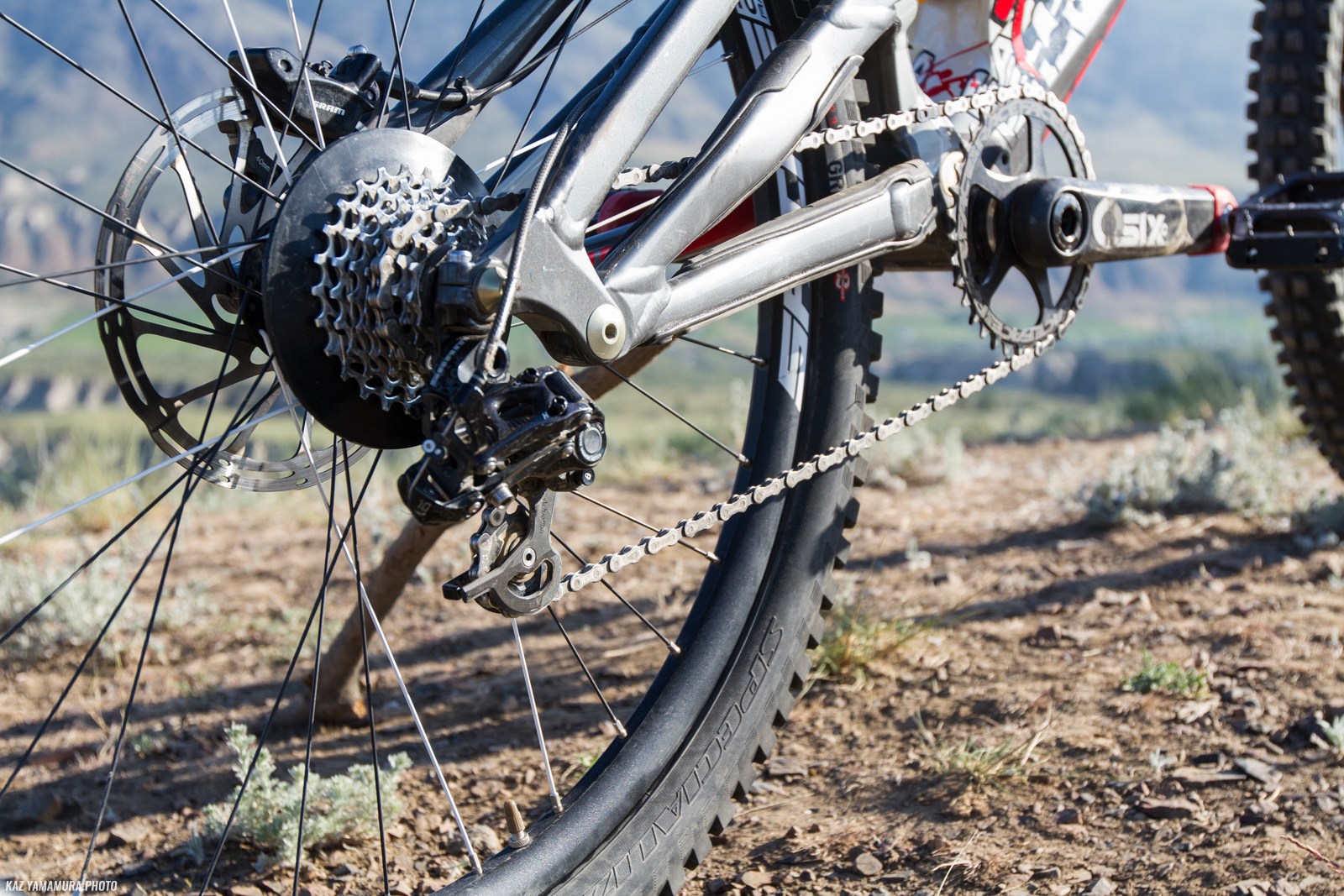 The Demo’s shifting duties out back are taken care of by a SRAM XO 10-speed, converted to 7-speed. An integrated chainstay protector keeps noise and dings to a minimum. 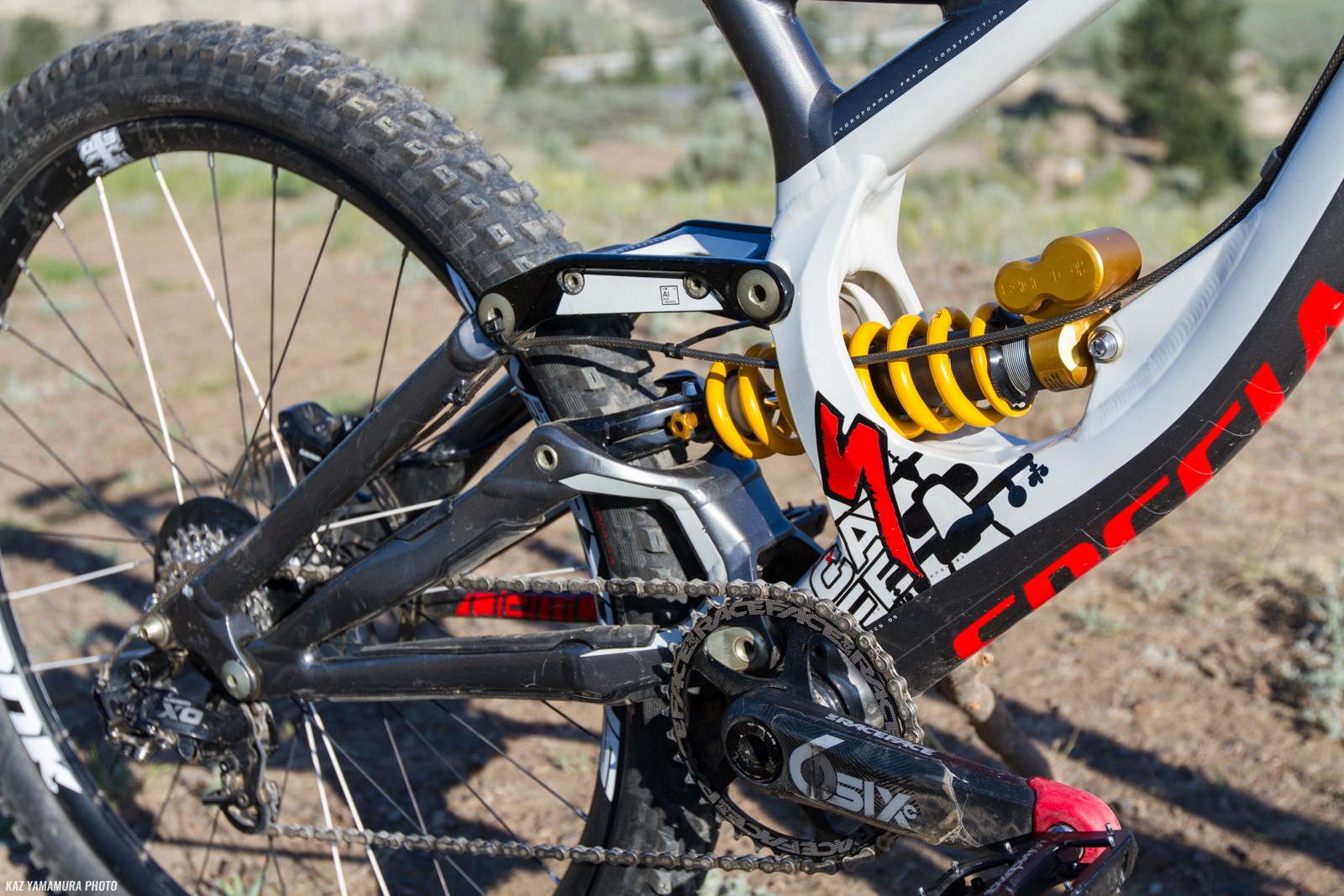 Dylan runs an eye-catching Ohlins TTX shock out back, paired with a 434lb spring. Just like the Boxxer up front, Dylan runs his shock with mellow rebound and compression turned all the way up. 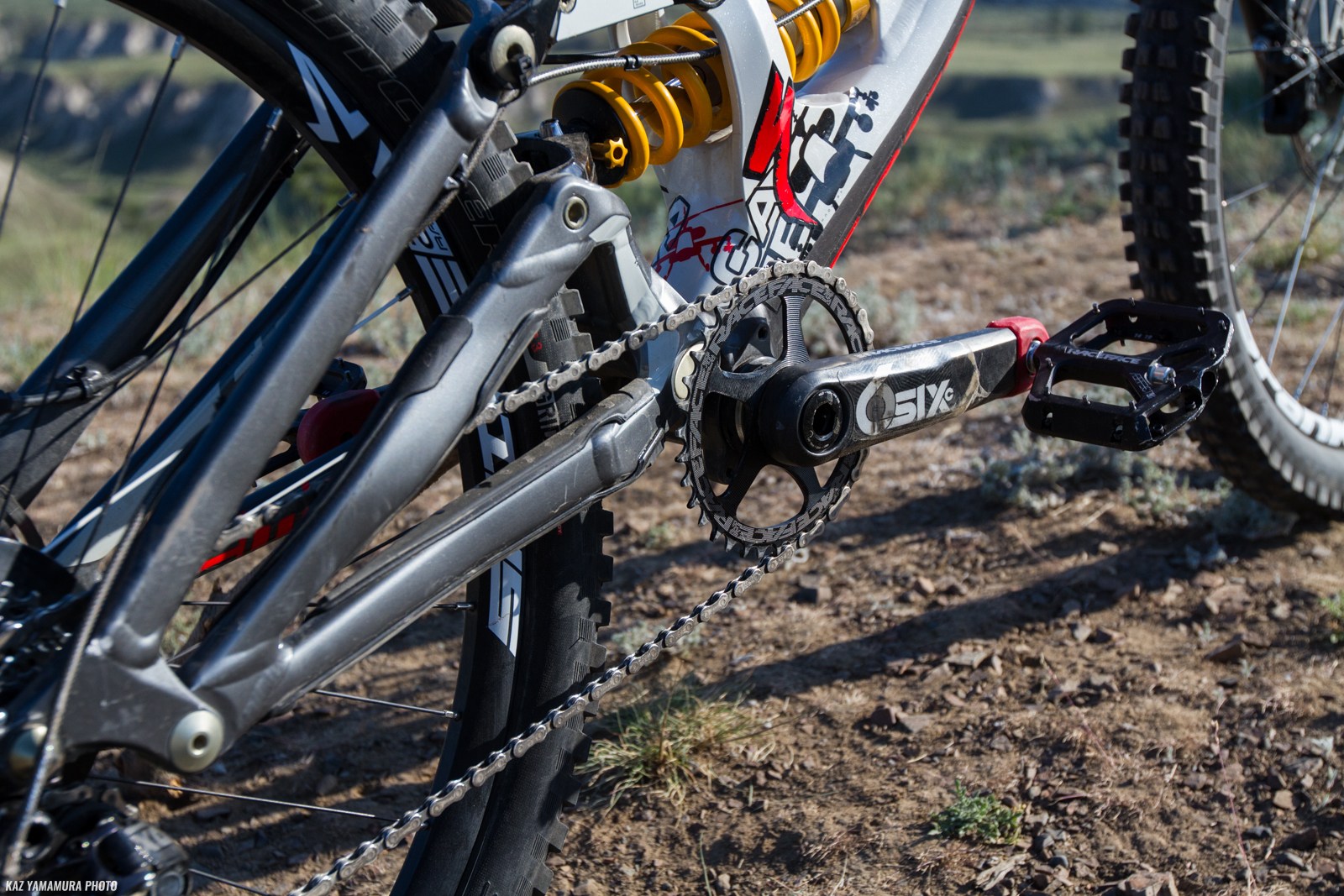 RaceFace Aeffect pedals screwed into 165mm RaceFace SixC cranks cinch onto a RaceFace 36T narrow-wide chainring. Dylan drops chains less with the narrow-wide with clutch set up than when he had a chainguide. Dylan runs Aeffect pedals on his Demo, as for him the oversized bearings on the Atlas pedals forced his foot onto the crank, and as he says, “allows for more foot swag”. (Interesting to note that the Atlas pedal’s oversized bearings kept my foot off the cranks, but my feet would find its way onto the cranks with pedals like the Aeffect -Kaz). 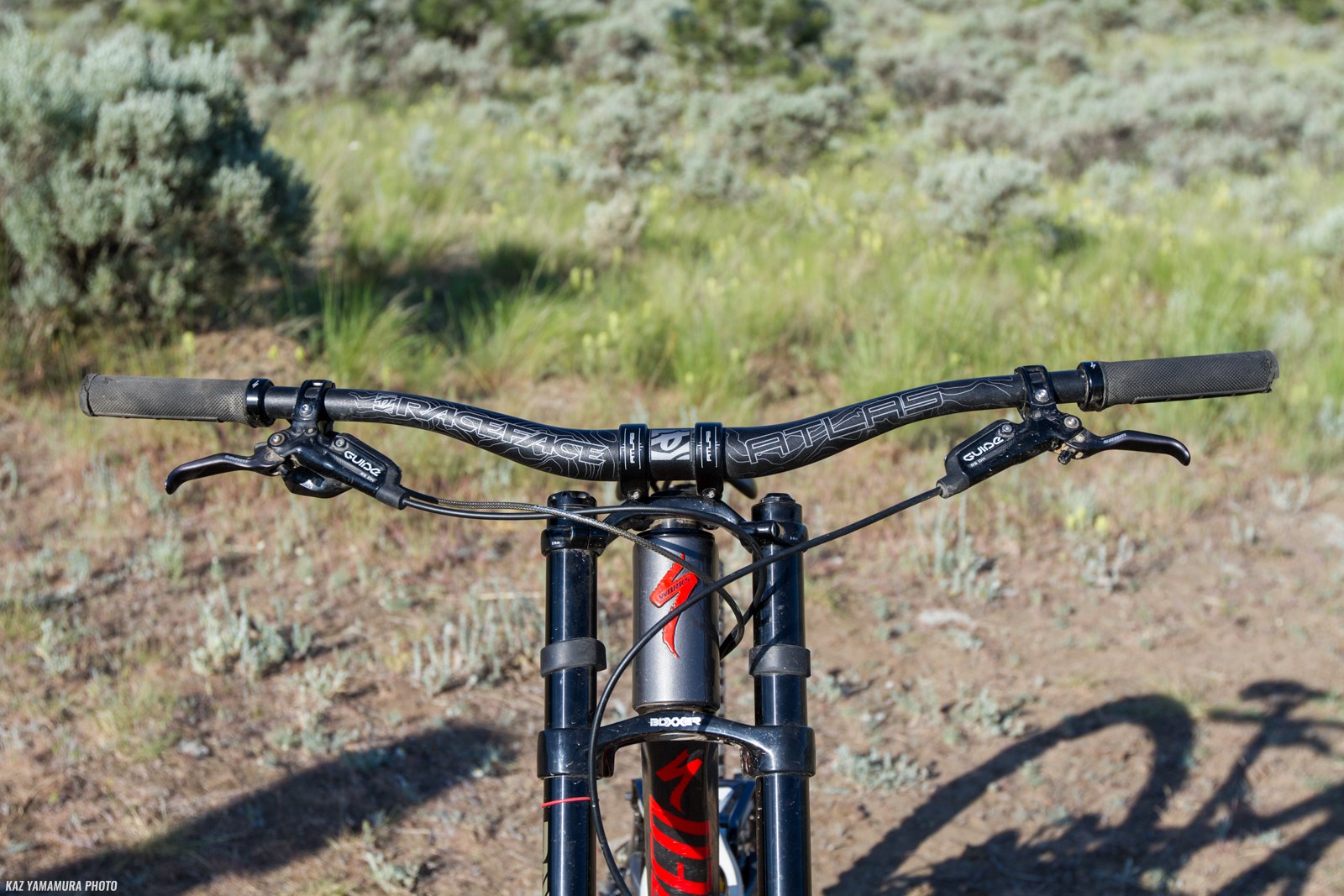 Dylan runs a 800mm RaceFace Atlas 35 bar with 35mm rise, rolled forward until there is no back sweep. Dylan opted to run the bars at their burliest and widest and work his way down, but ended up feeling more stable and stronger than ever with the 800mm width. 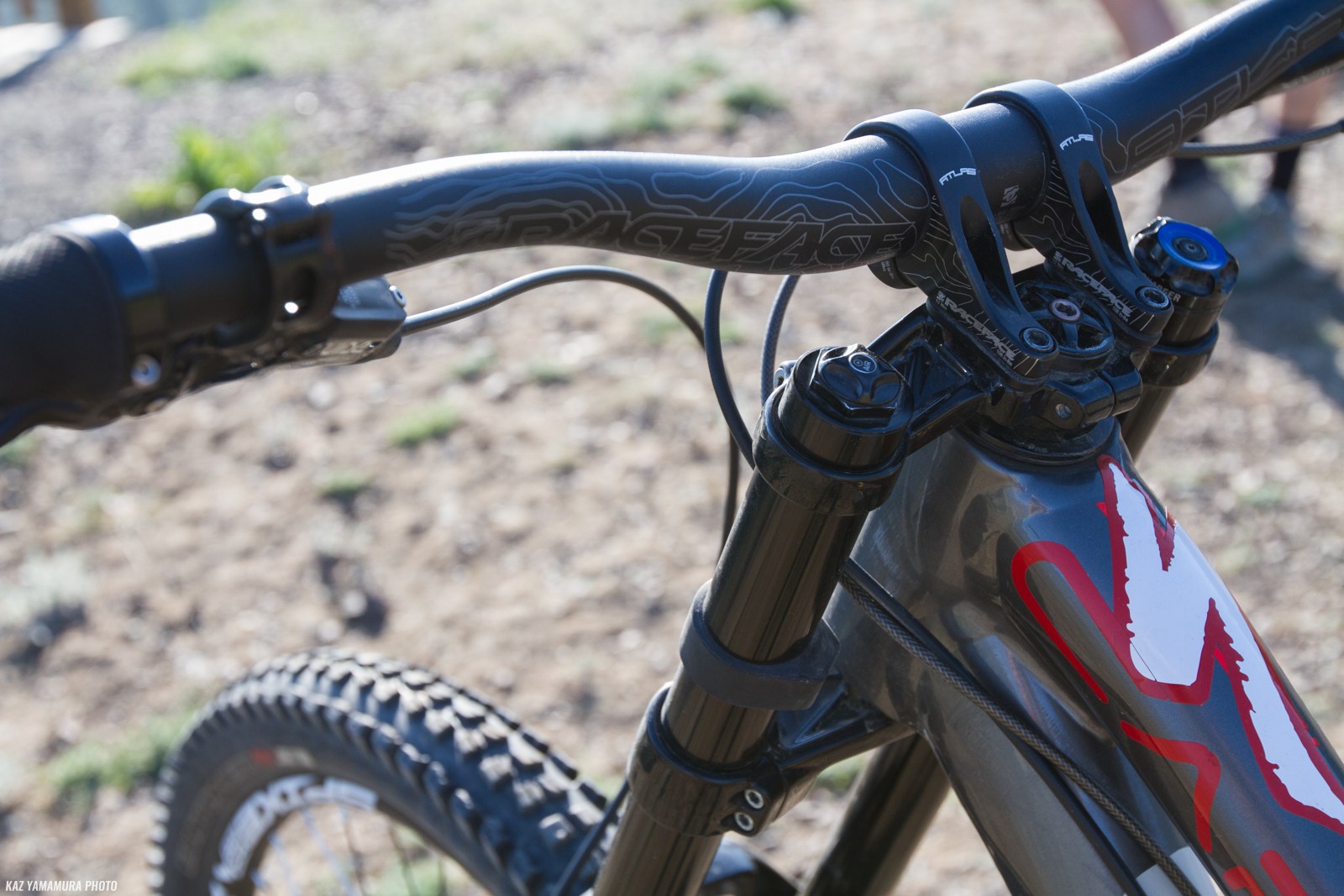 RaceFace Atlas 35mm Direct Mount stem attached his bars to the bike. You can see here how far forward Dylan runs his bars-sky high with no back sweep. 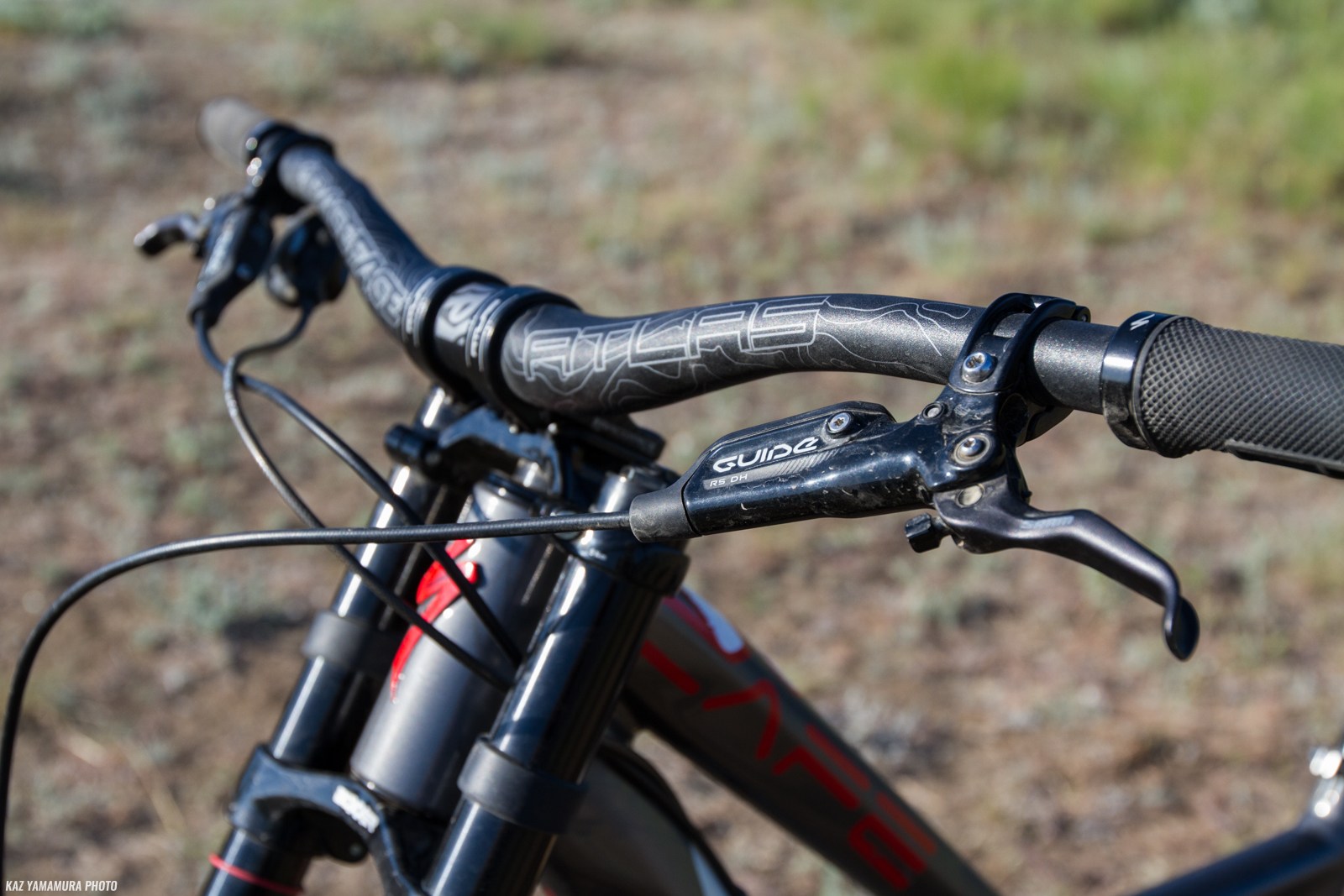 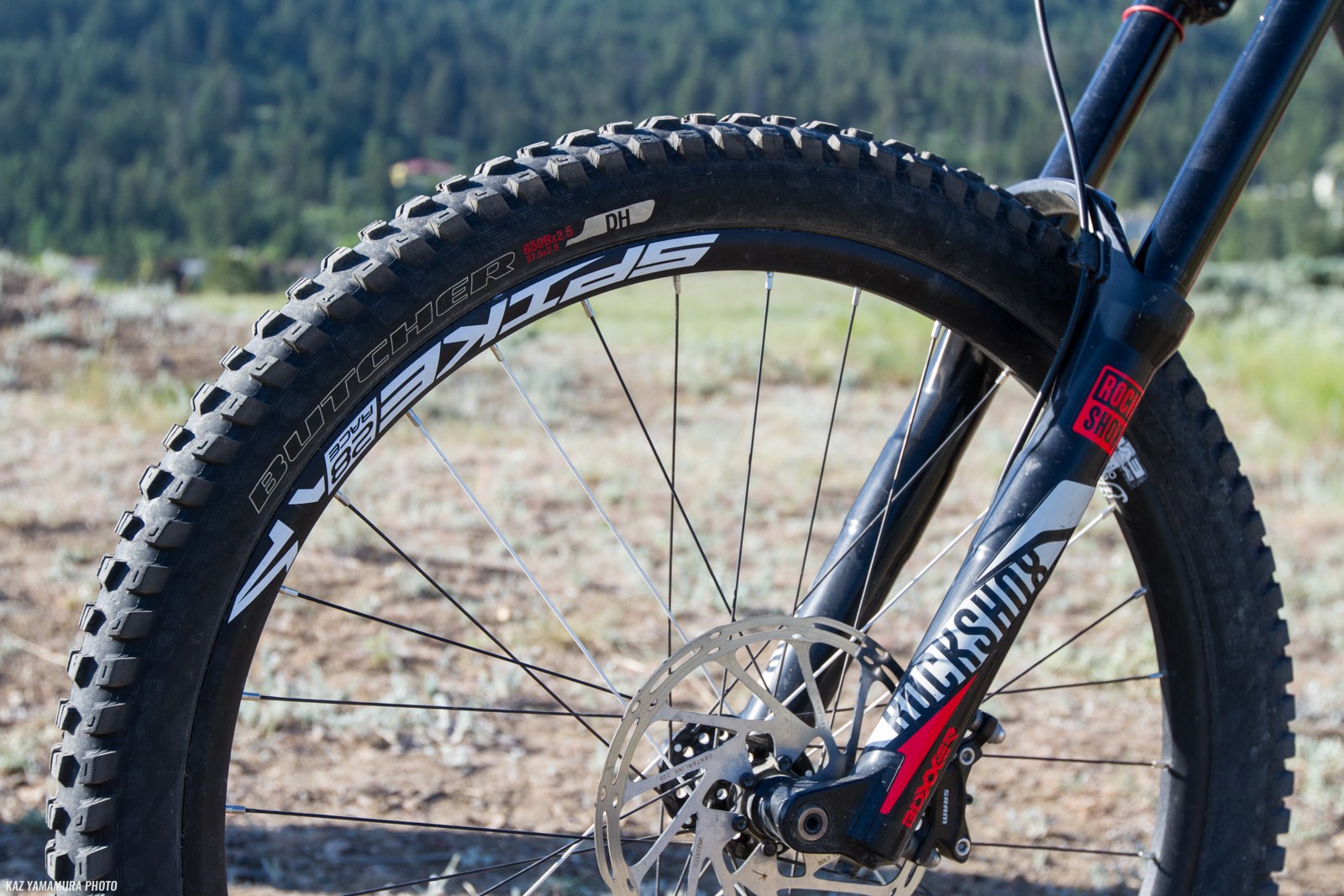 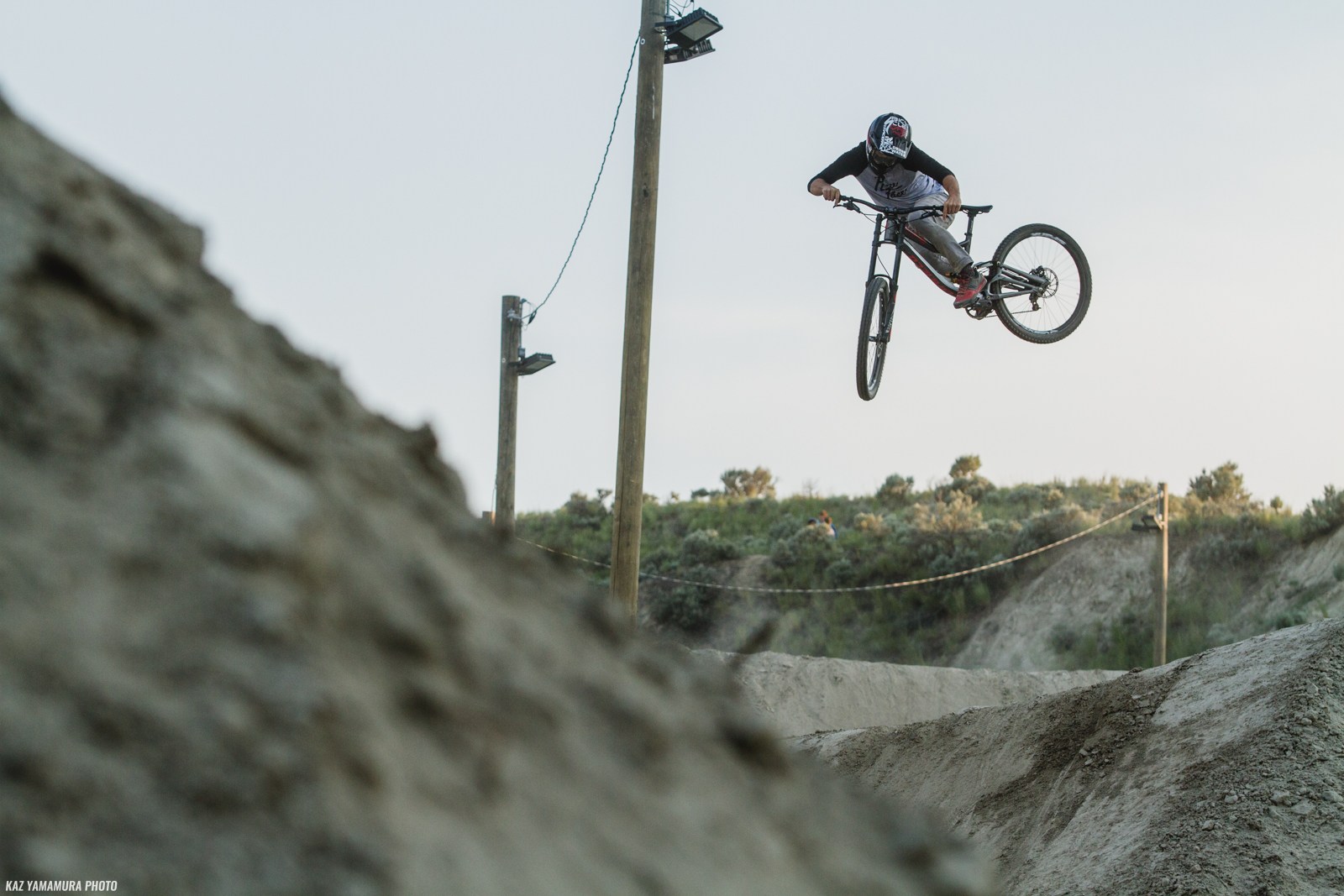 Up high and stylish in the dry, dusty desert of Kamloops. 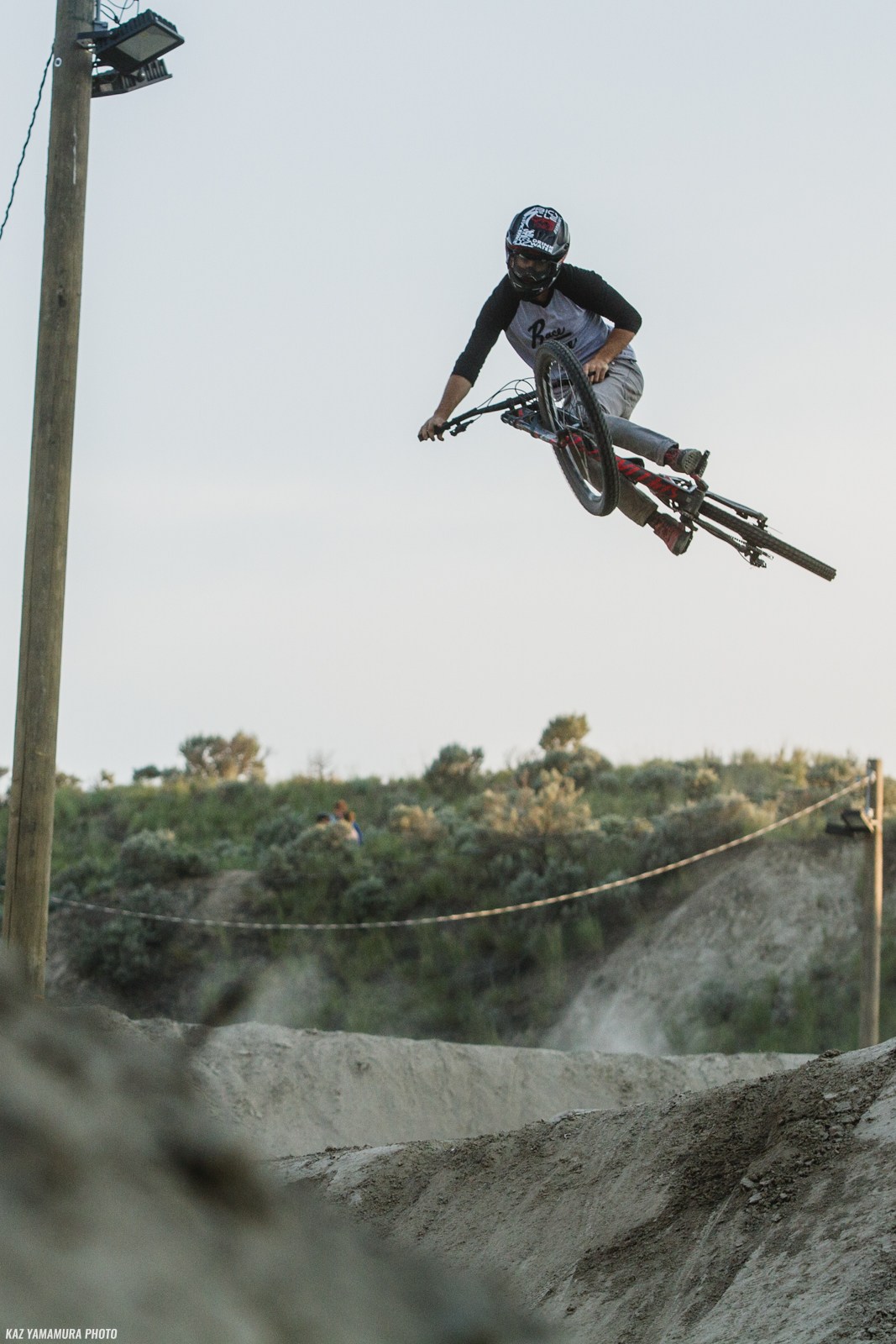 Up high and relaxed-classic Sherrard style. 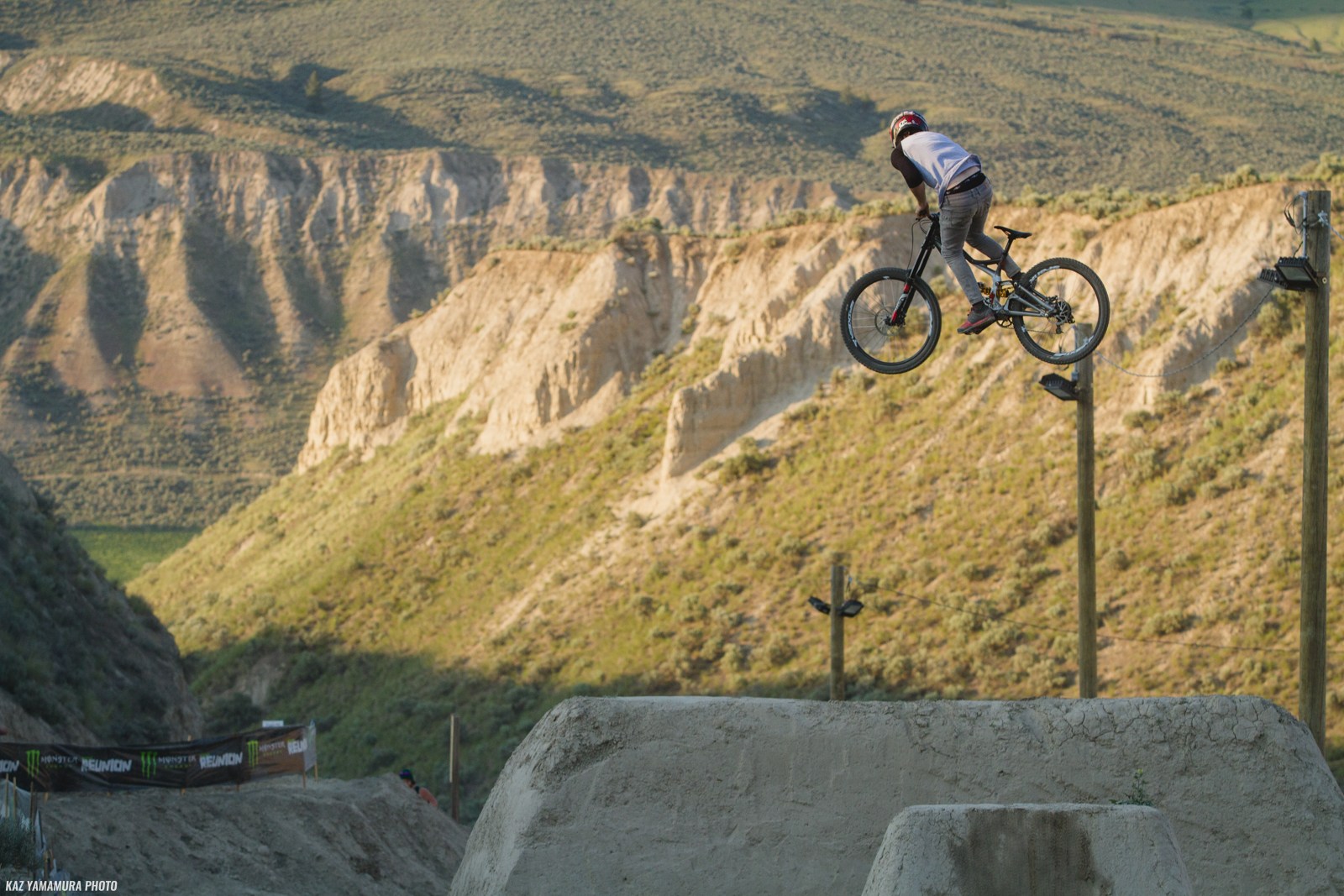 Light was firing, and so was Dylan’s stoke to get sideways. 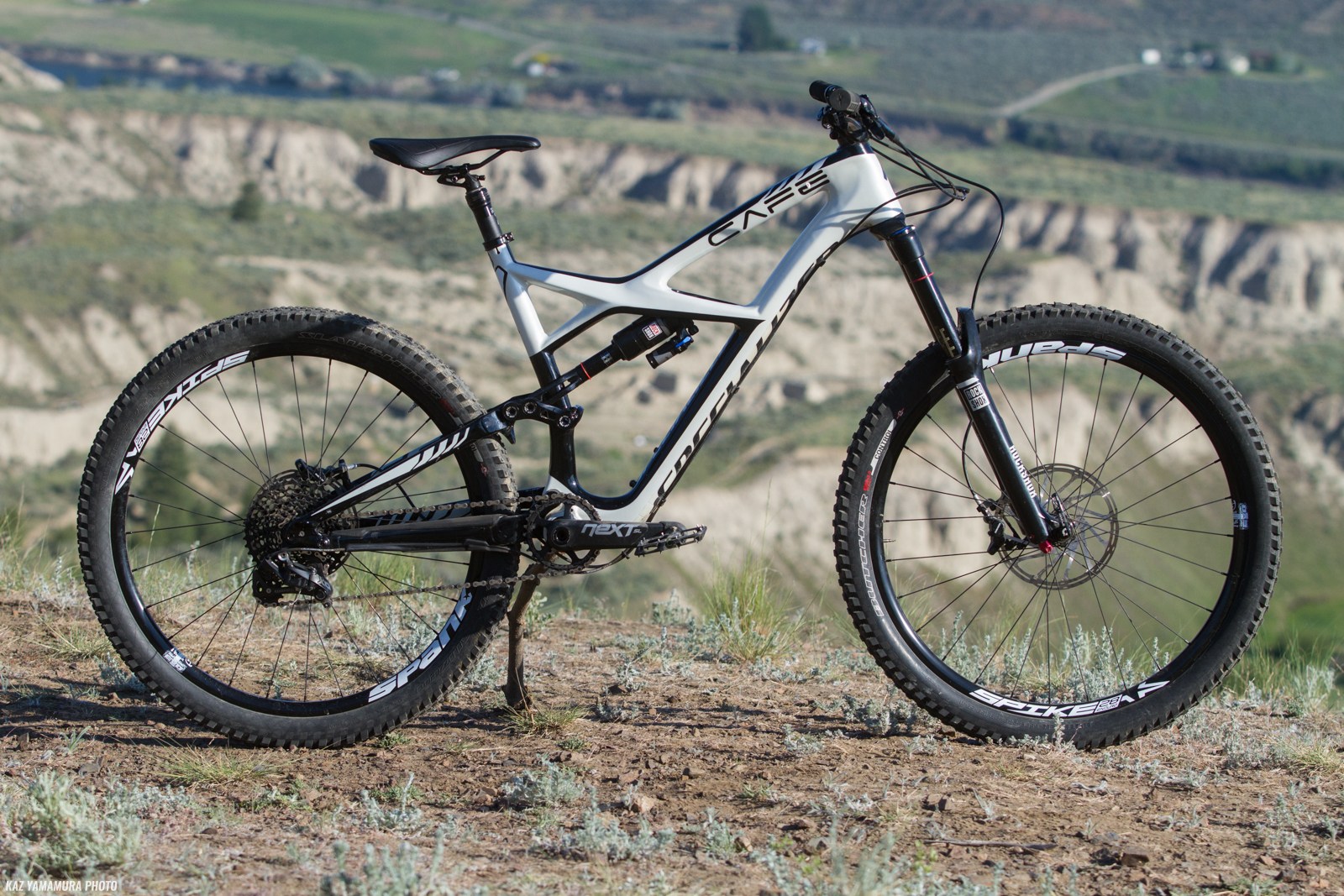 For riding up then down, Dylan is on the 650B Specialized Enduro Carbon with the “killer whale colourway”. Dylan says he feels better than ever on both the ugly ups and the deadly downs, and if he could only have one bike… 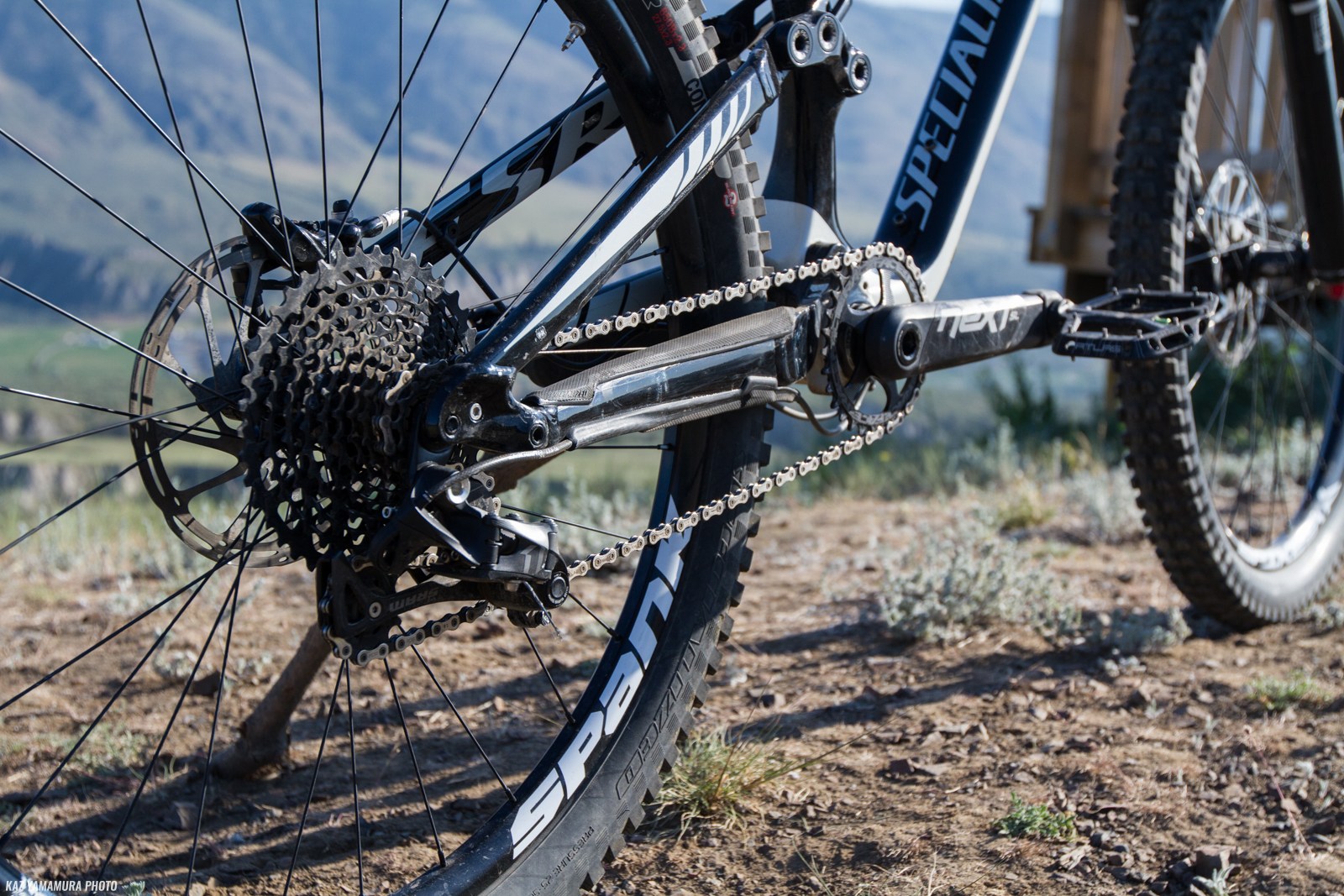 A SRAM X01 derailleur takes care of the shifting duties. 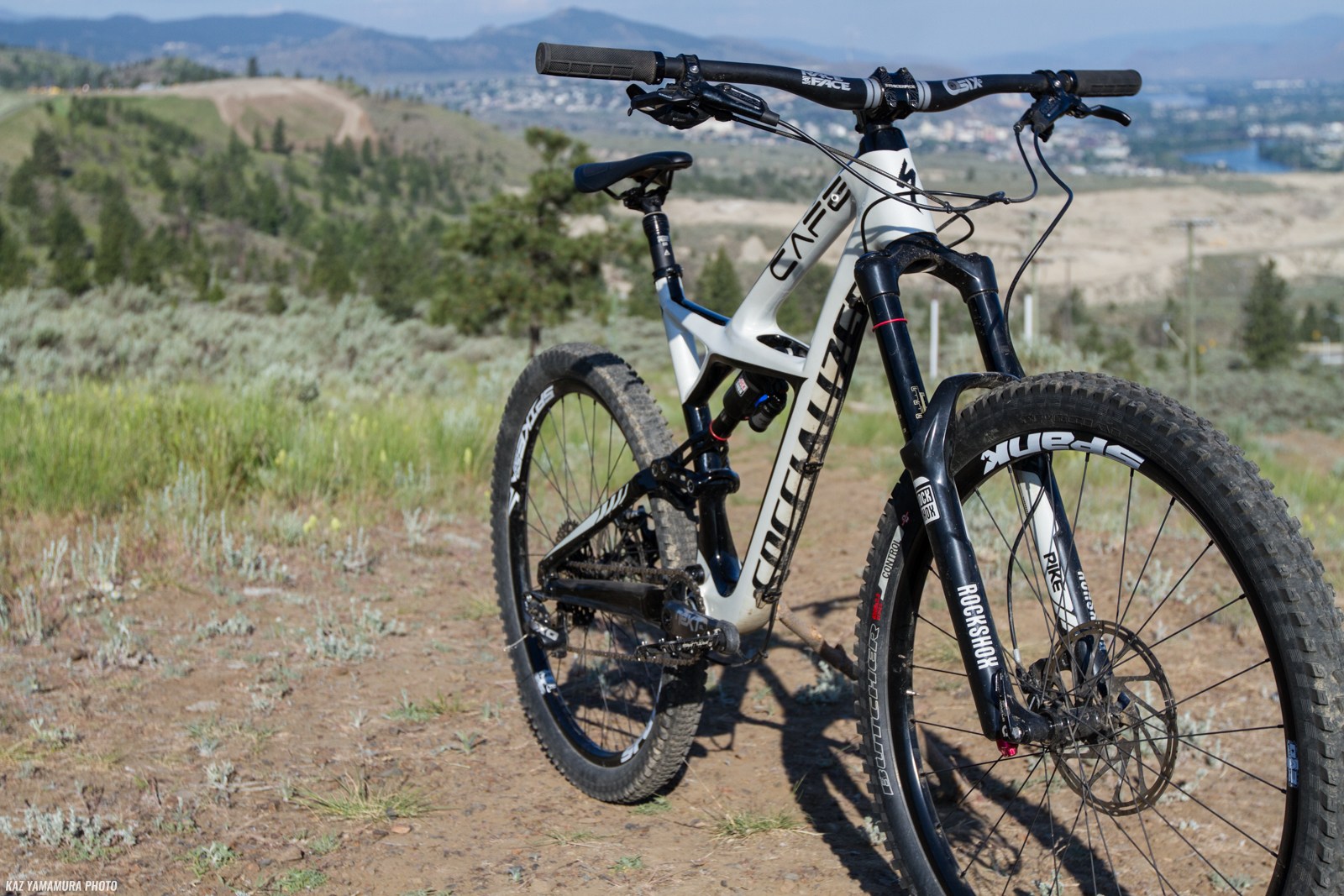 A RockShox Pike up front set to about 70-80psi with fast rebound takes care of the suspension duties up front. 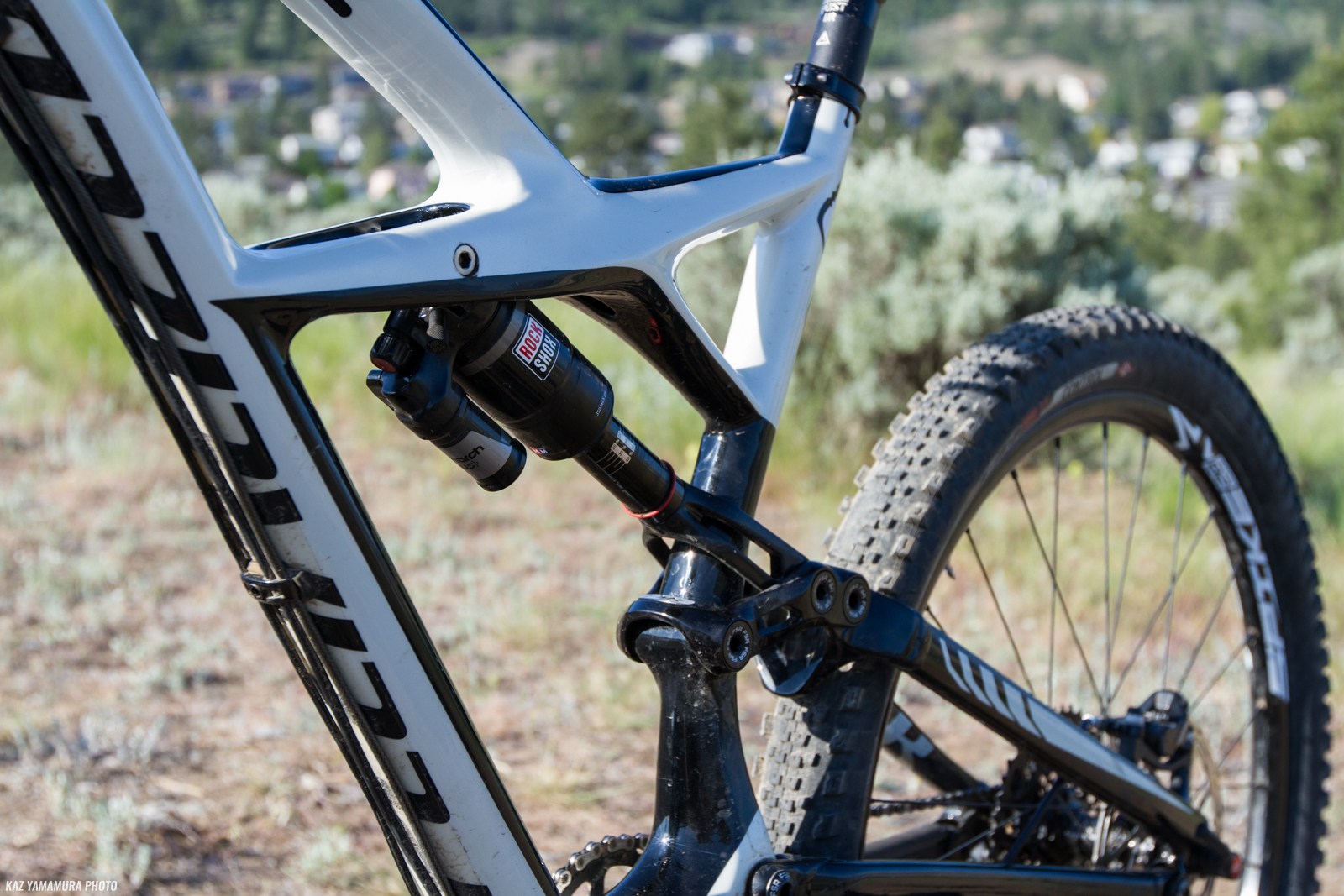 RockShox Monarch RC3 Debonair set to 265psi with fast rebound for the rear. 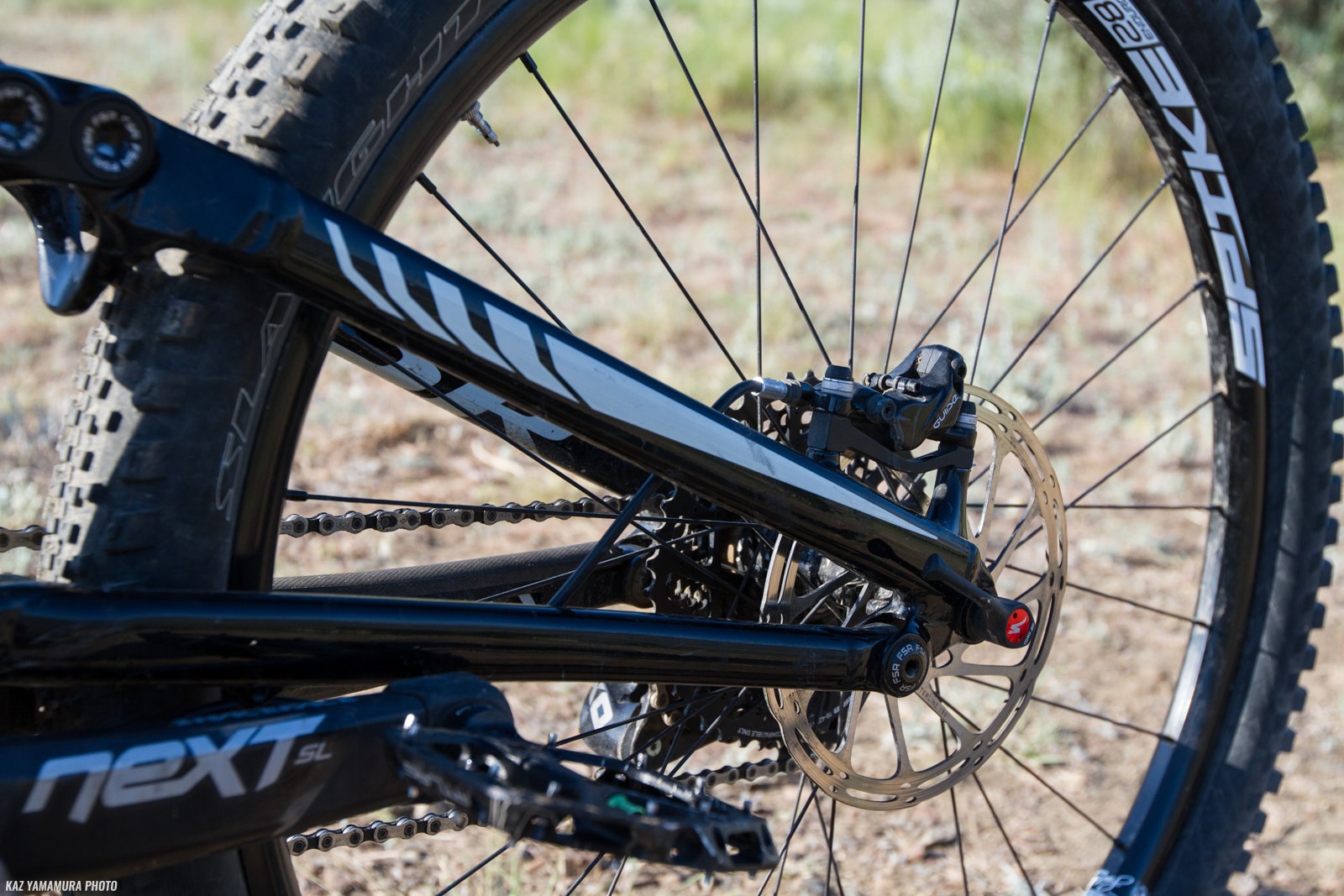 More SRAM Guide brakes, but this time the RC model, clamp onto centerline rotors for stopping. Dylan runs the Specialized Butcher Control up front and Slaughter out back-both at 2.3″ and both wrapped around Spank Spike Race 28 Enduro 27.5 wheels laced to Oozy hubs. 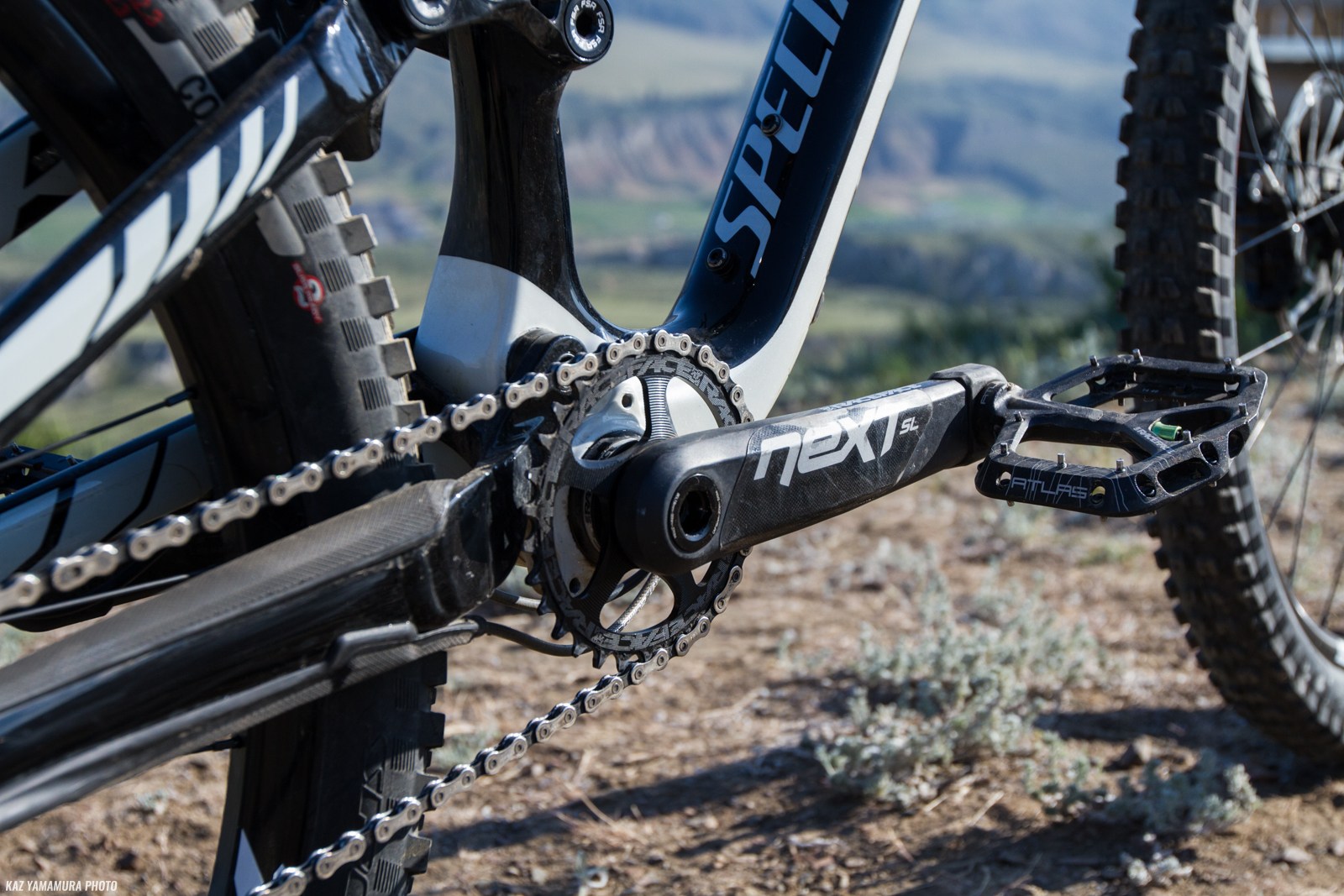 175mm RaceFace Next SL cinch cranks with a 30T Narrow-Wide ring to turn the wheels. Dylan calls this the “friendship size”, because he can climb a bit slower and keep his (slow) friends. The 30T does make him spin out at a lower speed when descending, teaching Dylan to stay off the brakes and hold his speed. 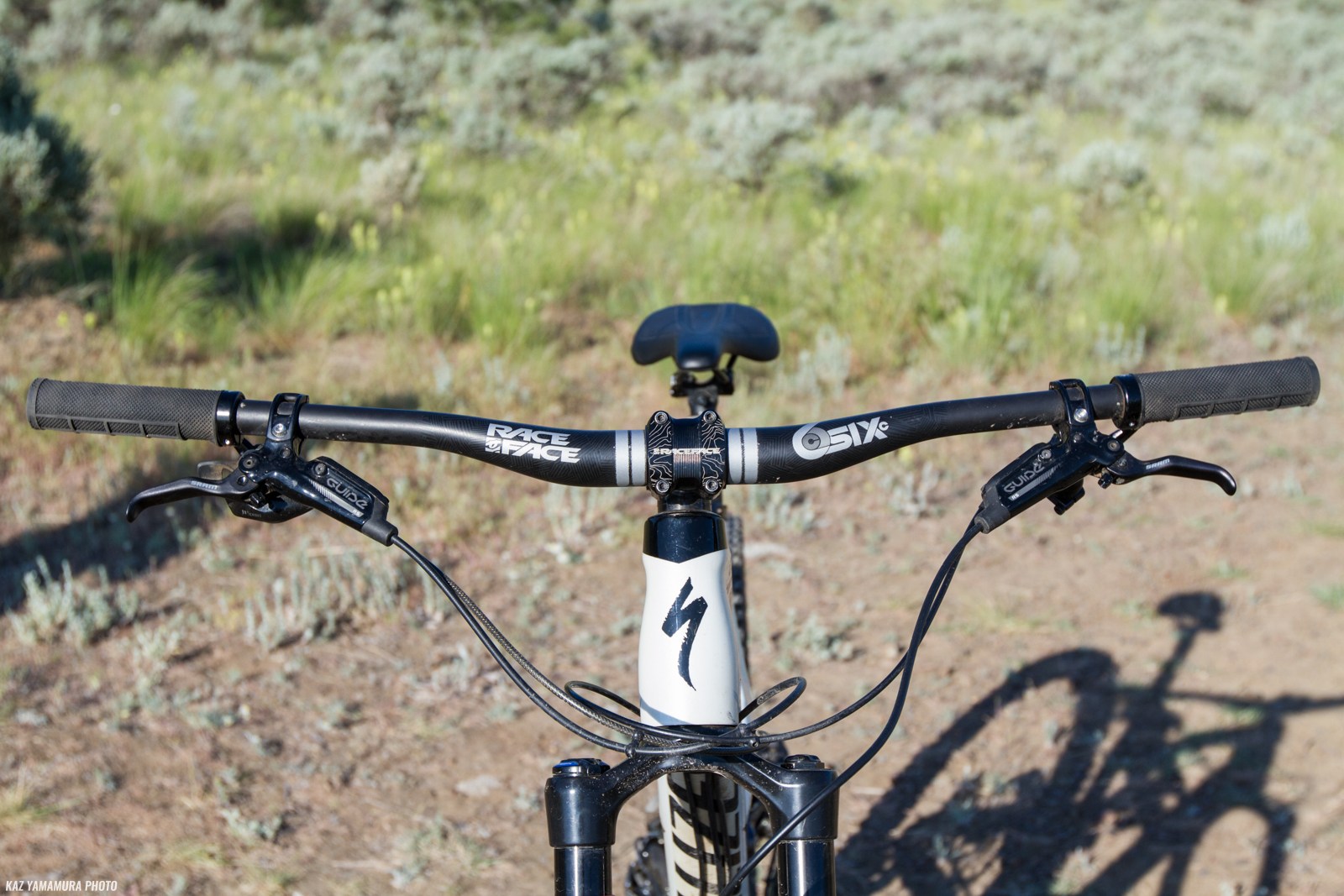 Dylan doesn’t like having inconsistencies with the feel of his bars, so he runs the same set up as he does on his DH bike; 800mm RaceFace SixC 35mm bars rolled forward for minimum backsweep, mated to a RaceFace Atlas 35 stem. 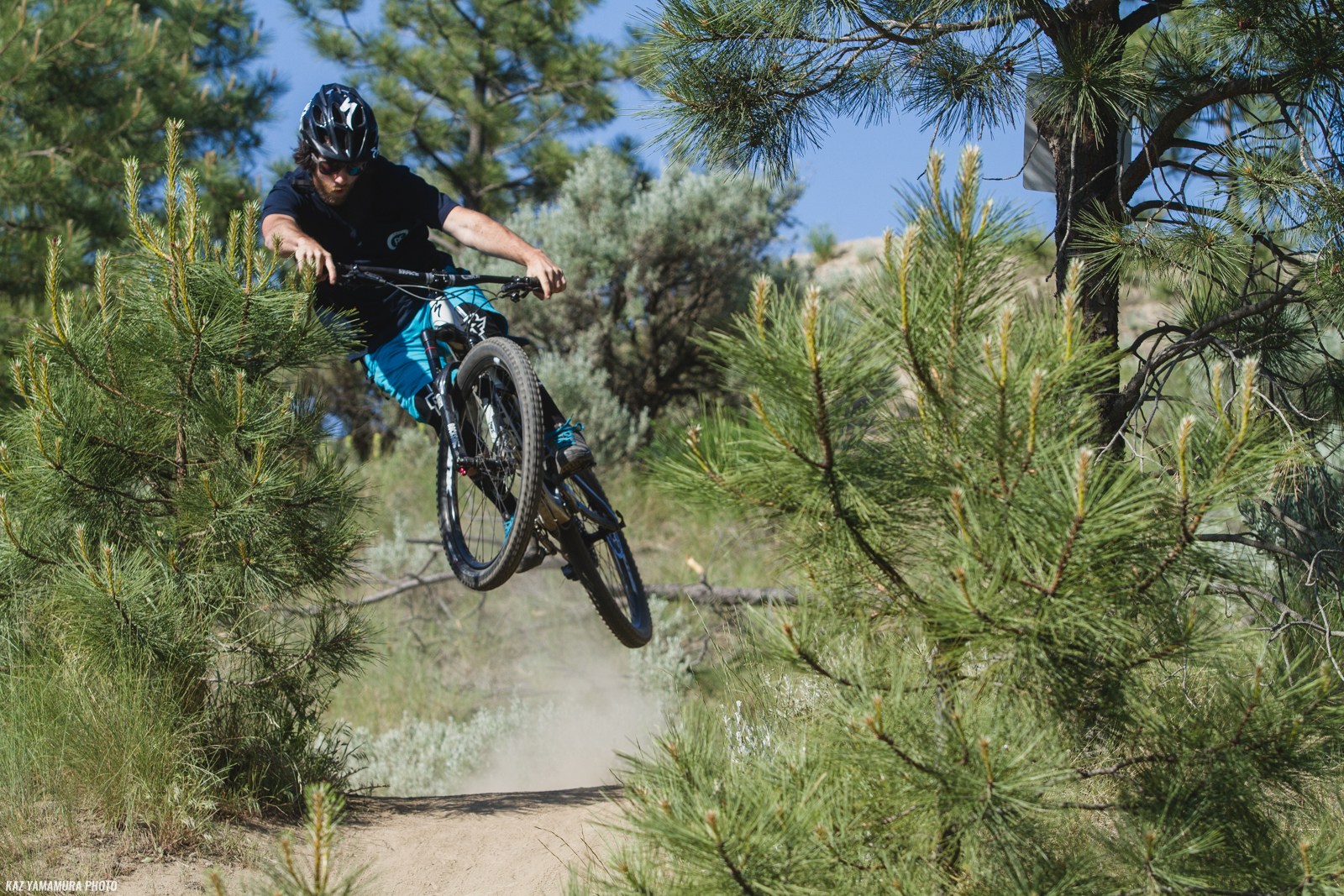 This isn’t even a jump, more like a small bump in the trail. 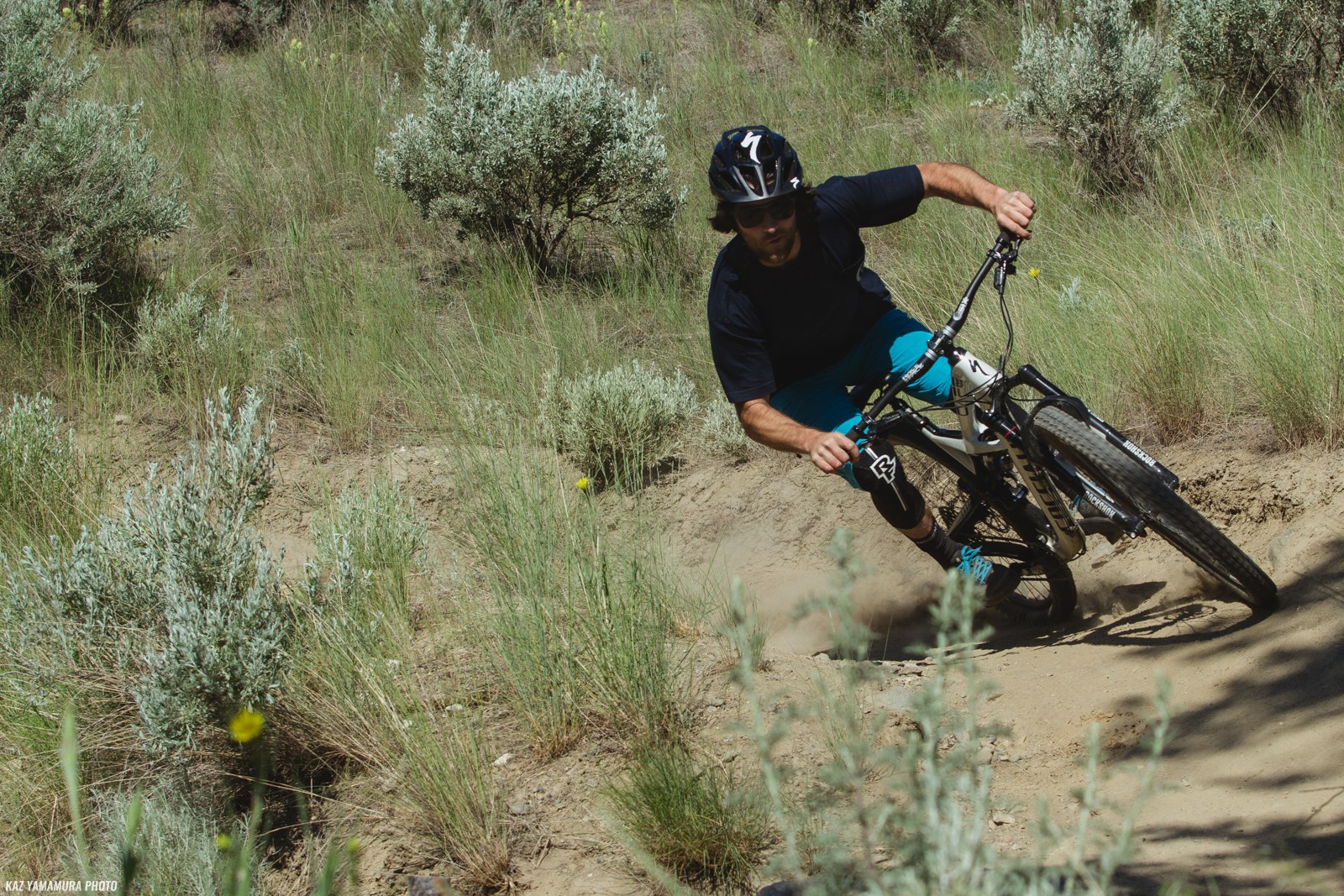 Staying low and nonchalant in the corners. 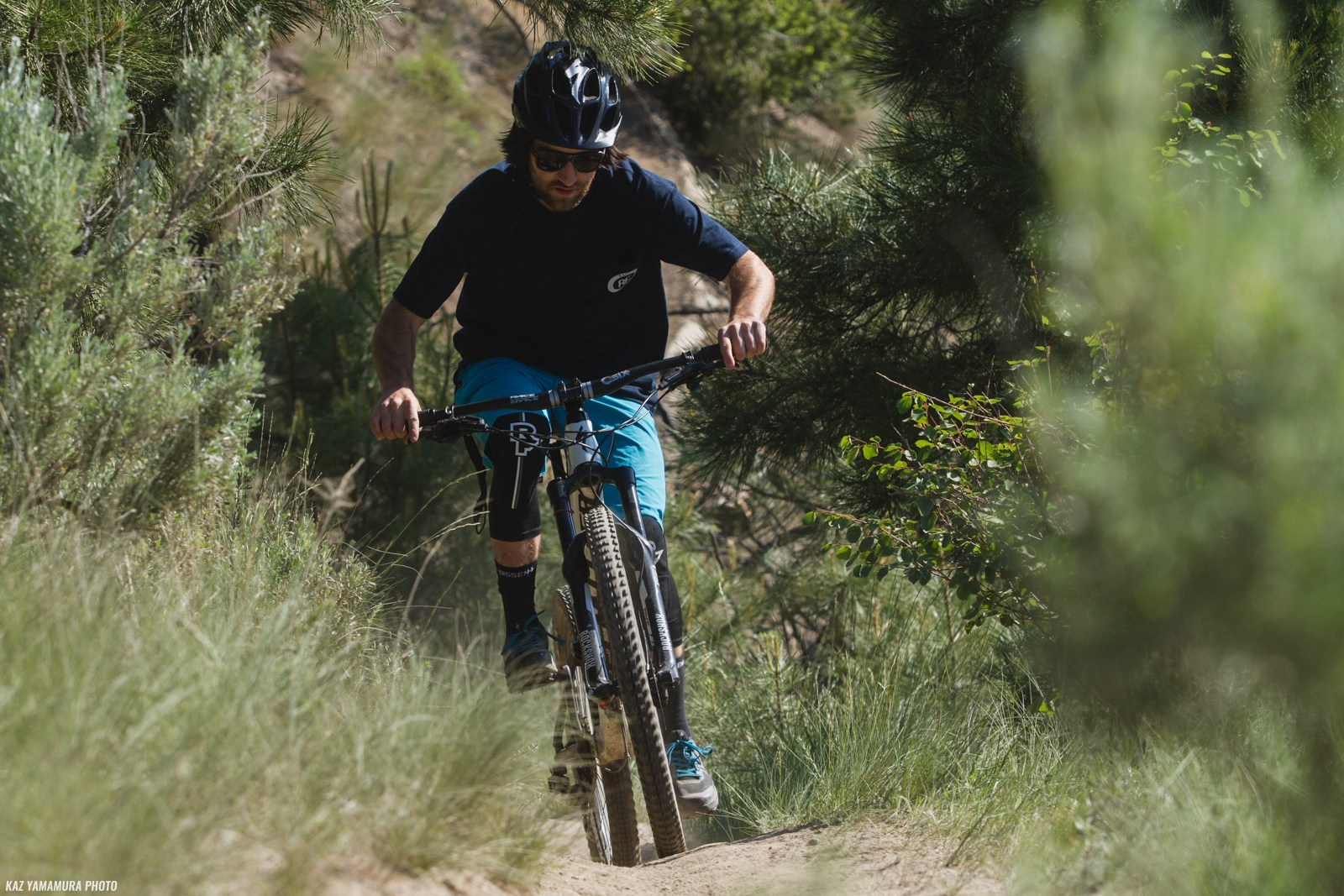 Utilizing the friendship gear to get back up to the top. 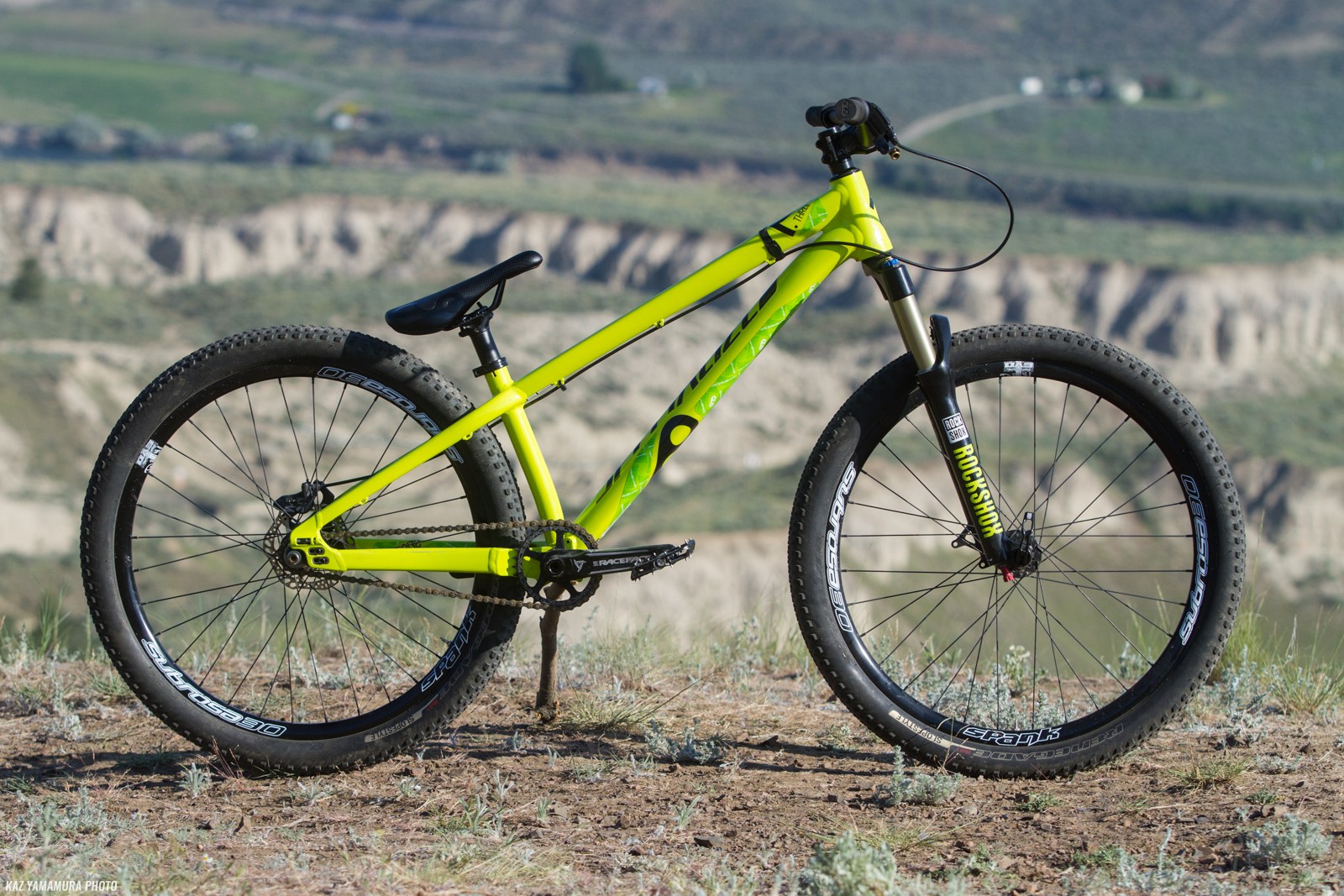 Dylan does indeed still ride his dirt jump bike, and for that he uses the Specialized P3, his go-to bike for mellow evenings at the Kamloops Bike Ranch or the Taylor Gang Compound. 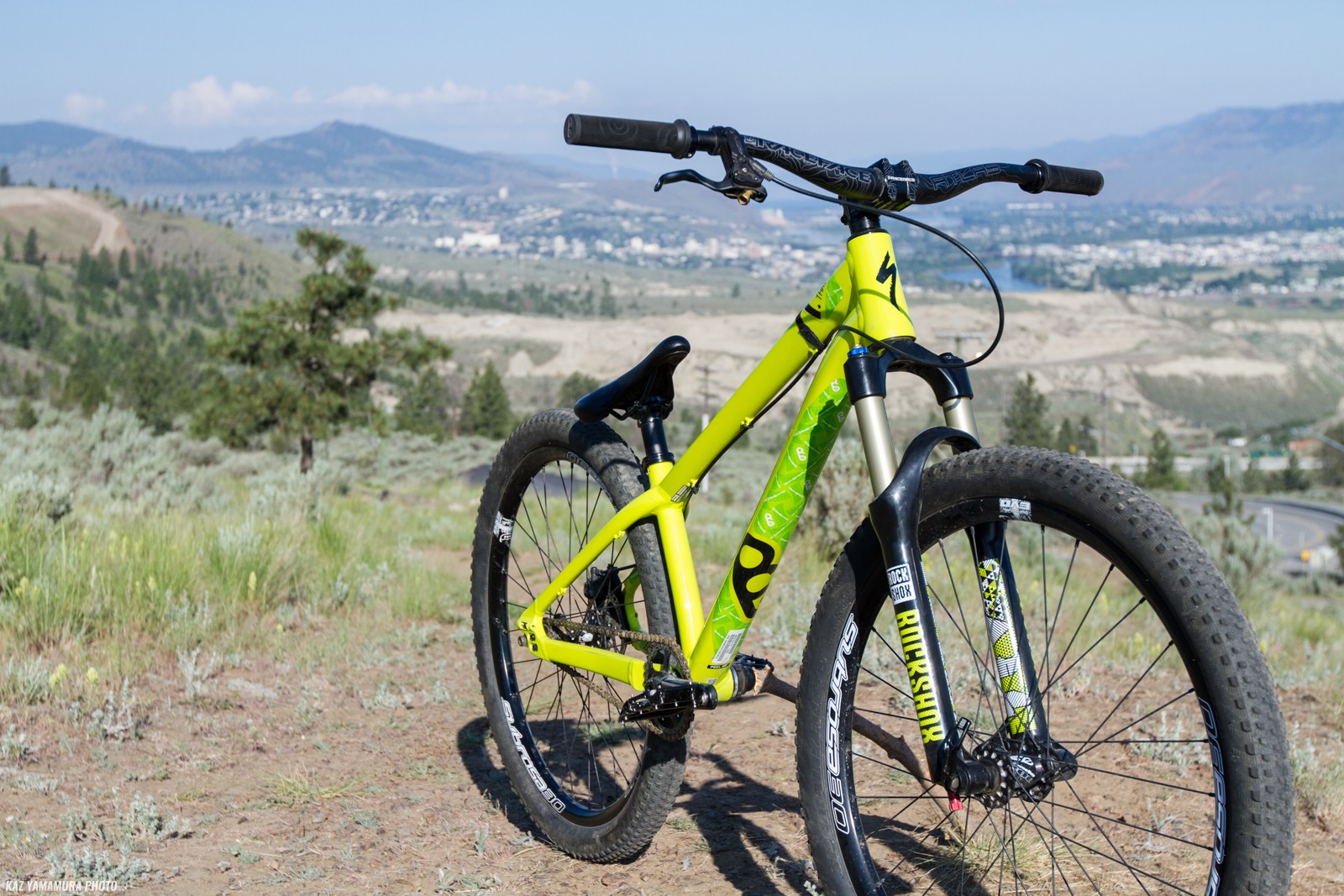 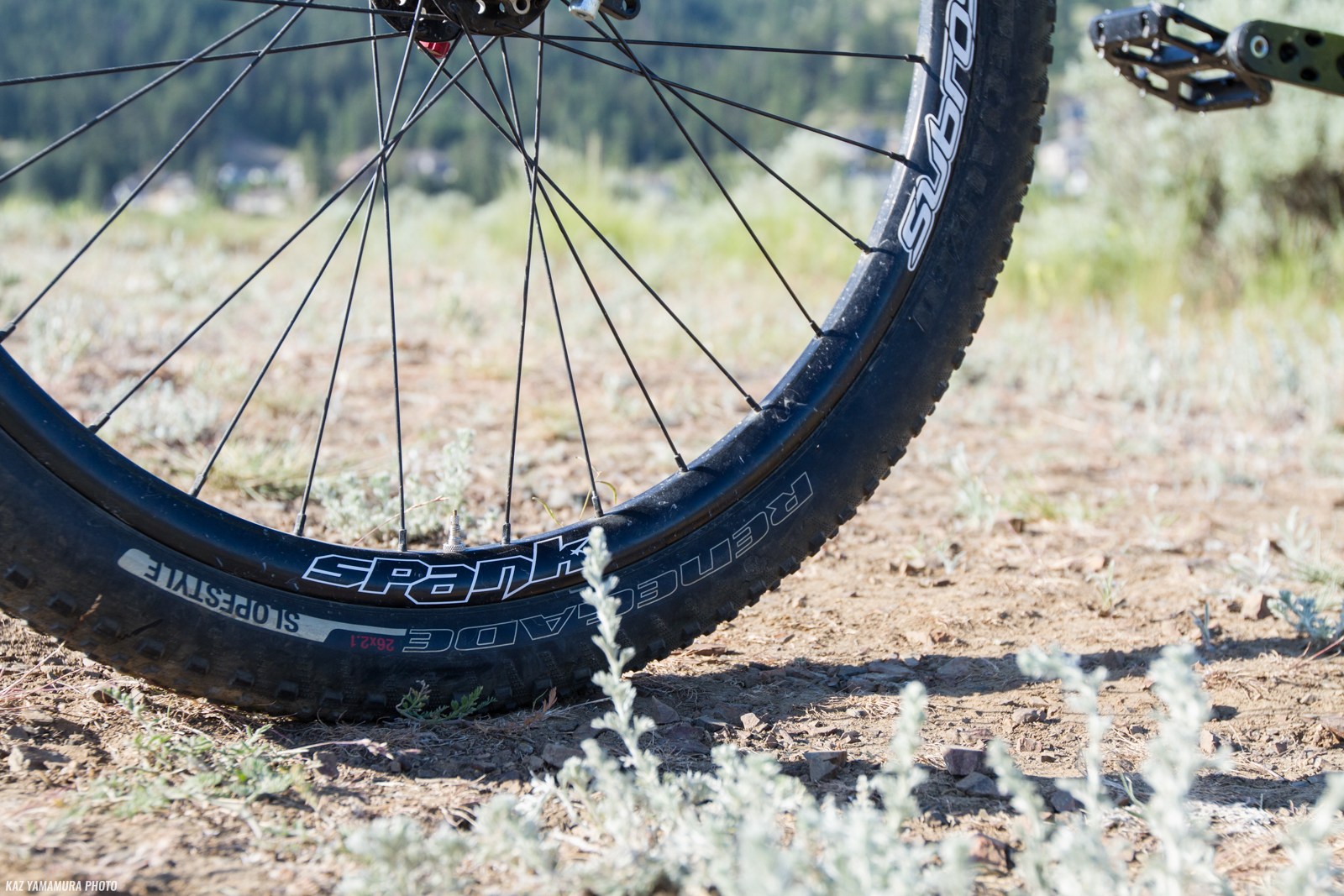 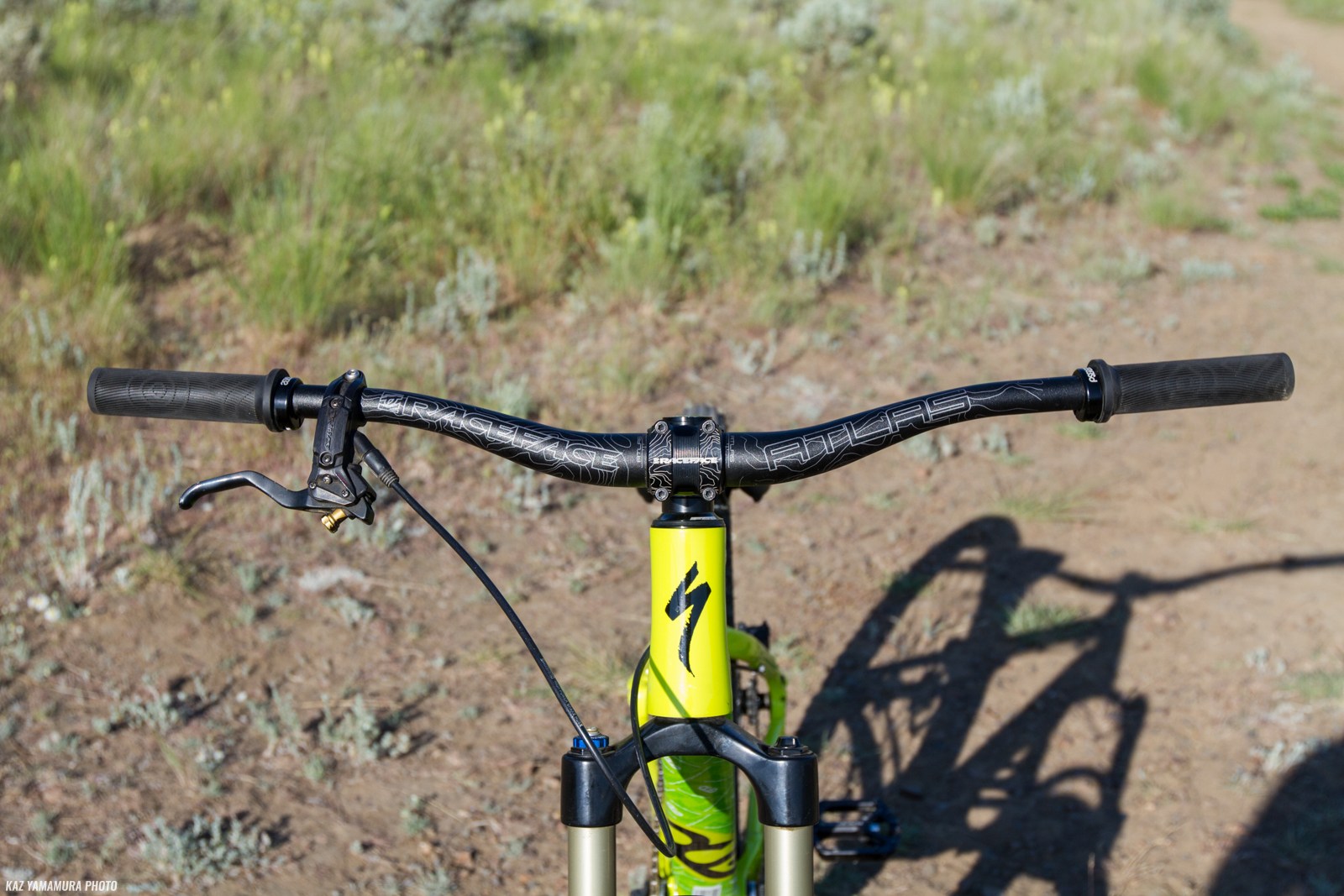 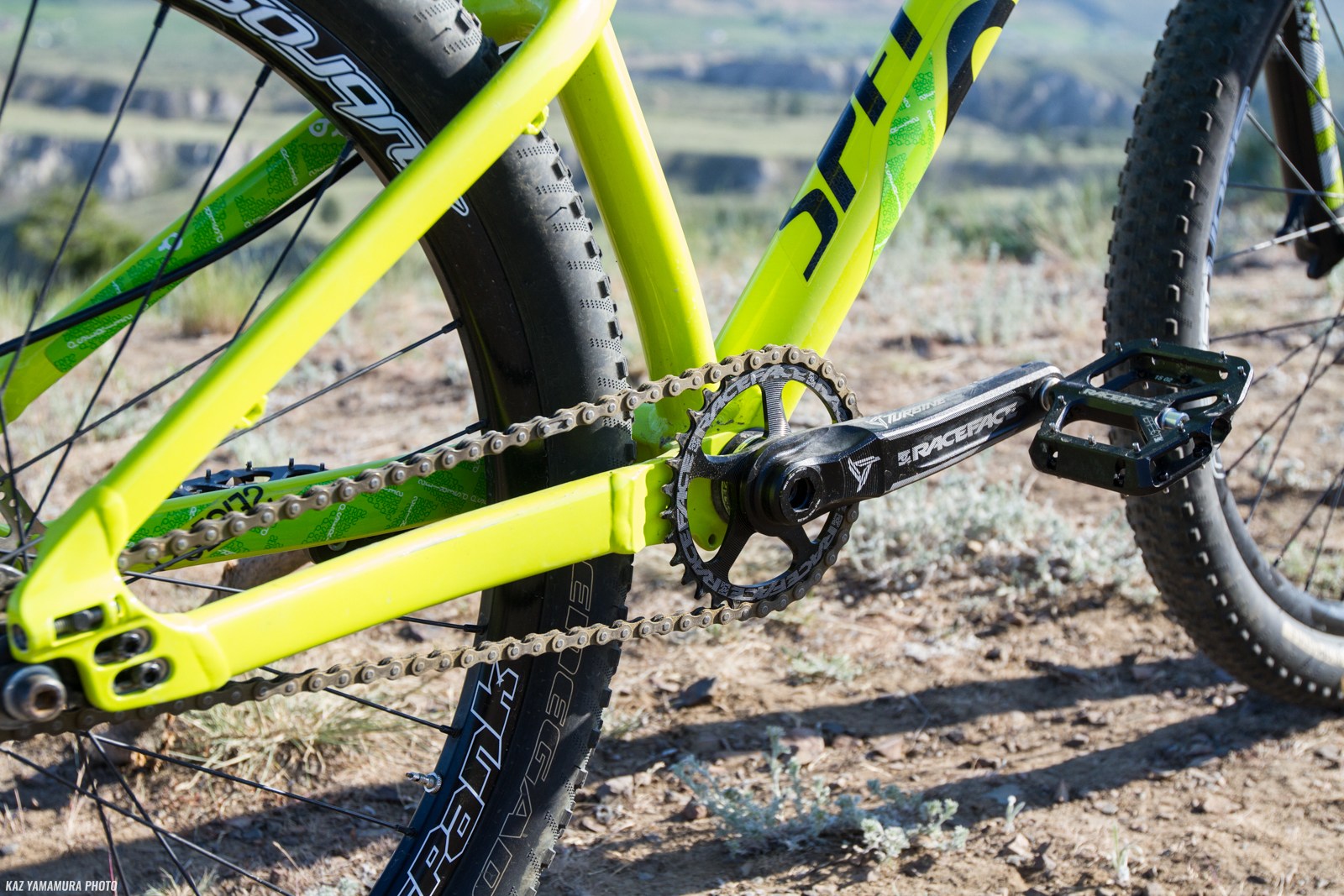 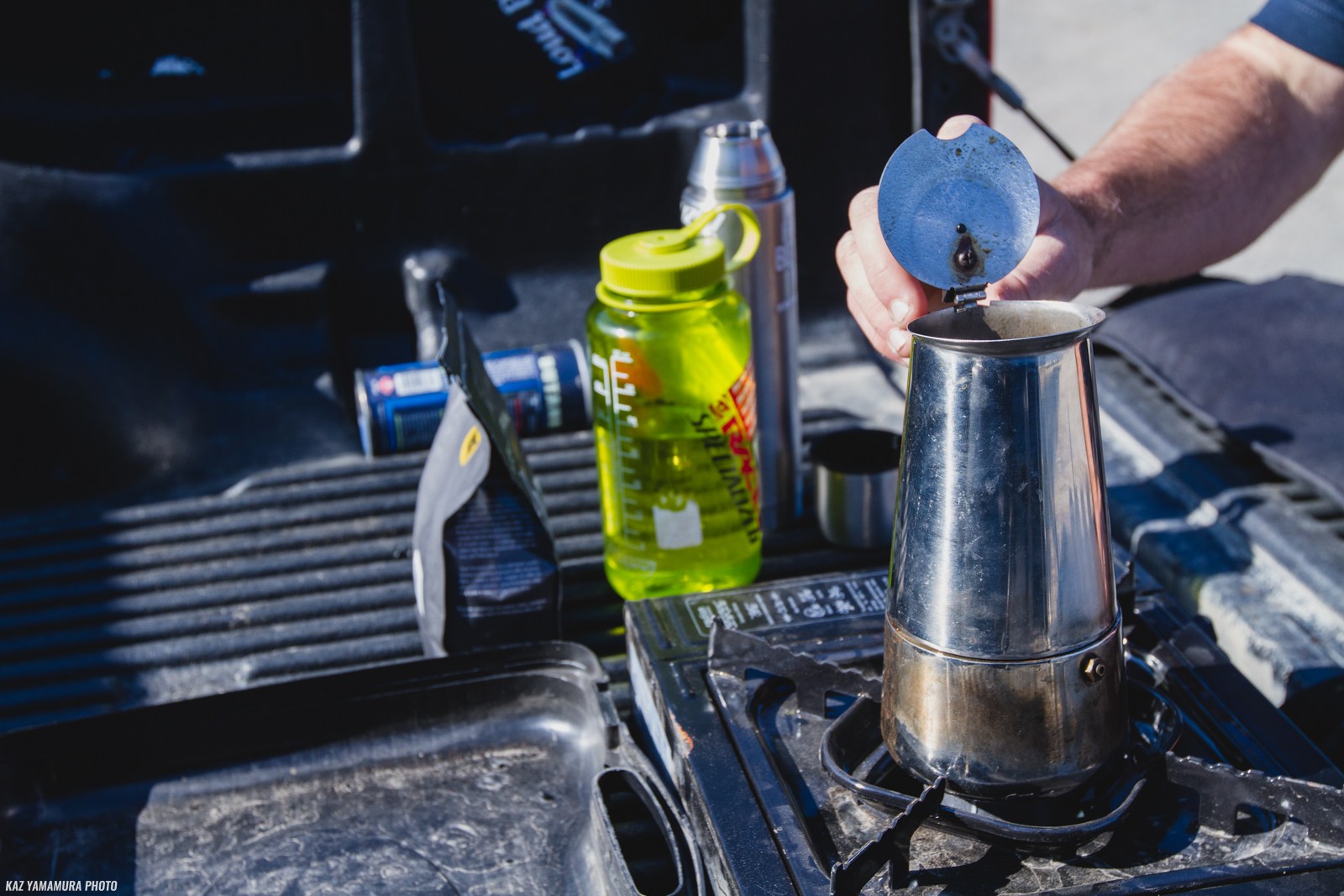 Nothing like an espresso after a quick morning shoot. 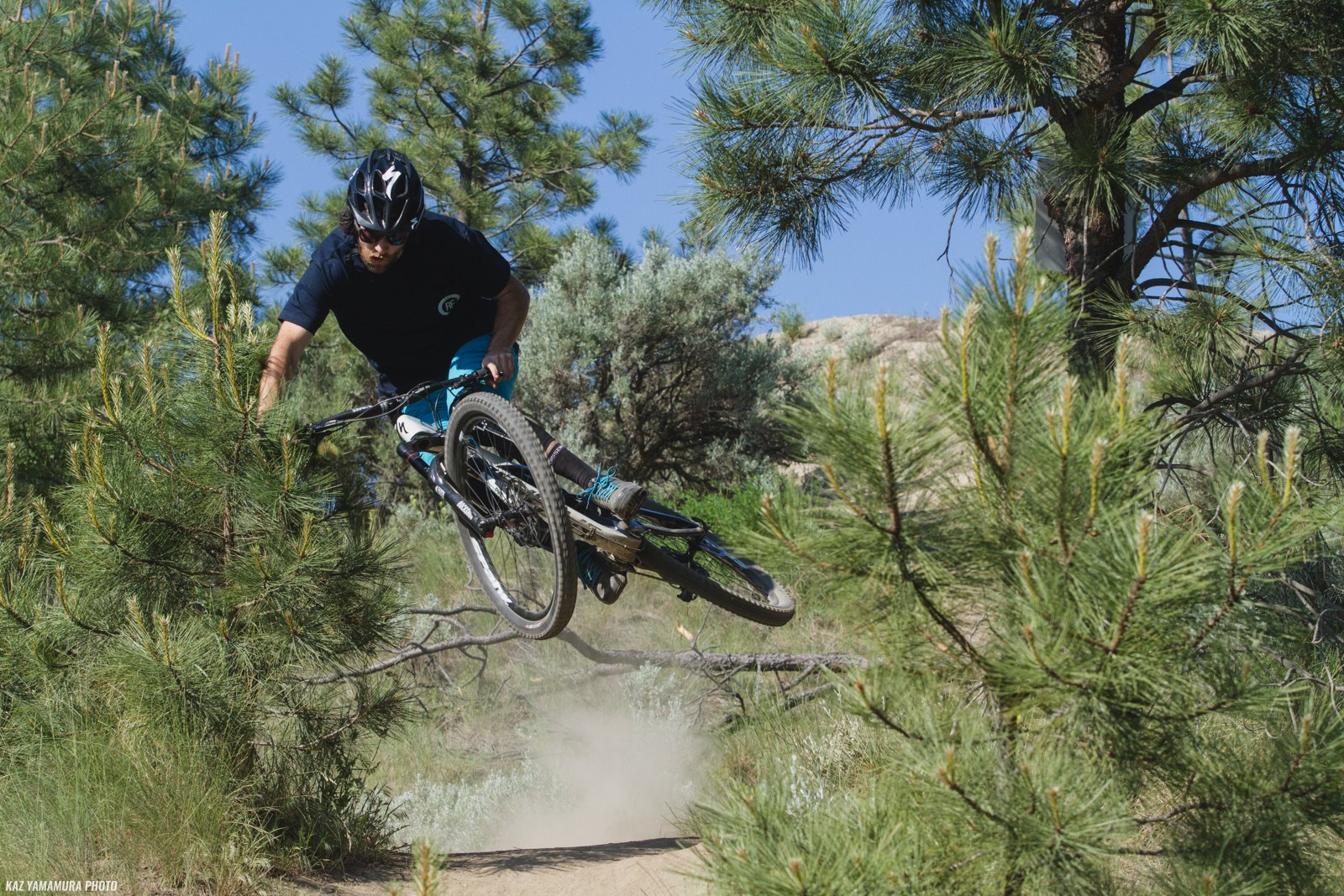 Same small bump on the trail just for good measure.

Which bike would you wrestle Dylan for?

That's a quite the quiver and all kitted out with top shelf SRAM, RF and Spank parts. Impressive.