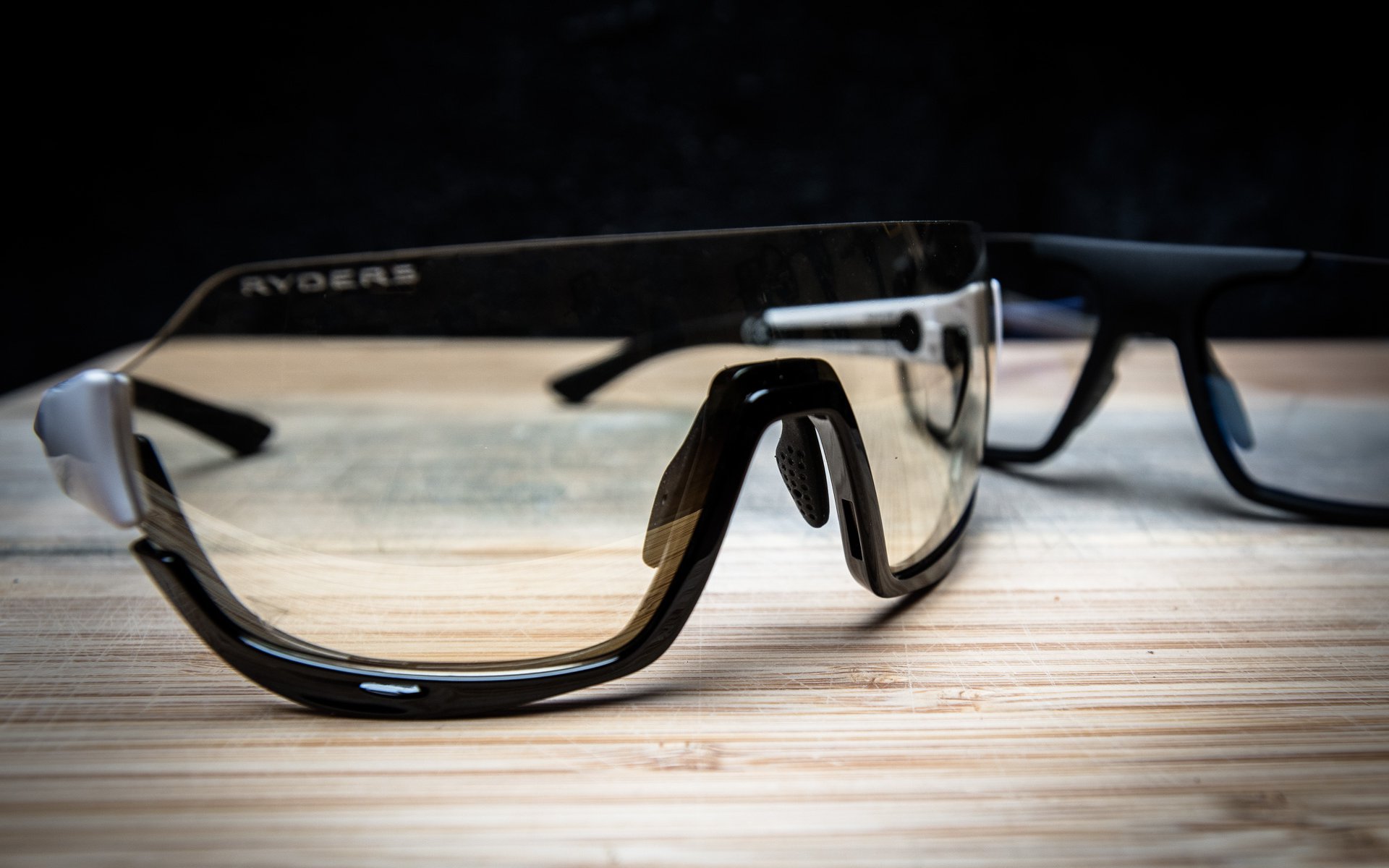 Eyewear is a tricky one for a lot of people. Part fashion, part function. Many consider glasses or goggles a necessity for riding, but there's no question that a lot of you grapple with what technology you can actually perceive, and what is fluff. The big eyewear brands have always mixed a stiff cocktail of technology and design, spiked with heavy marketing campaigns, and served with a sidecar of big time sponsorship. Before you cry foul about being a profit center for four-eyed product manufacturers, realize that your eyes are your most important asset in any sport. If you can't interpret and process the information your eyes deliver to you, performance at any level - whether you're a pro or a Saturday struggler - will suffer. What you require in terms of eyewear and how much that should cost is where the picture gets a bit murkier. As usual, it depends on many factors.

Dust, mud, insects, and branches are a legitimate, constant threat to your eyeballs. Sun, rain, and wind can make things difficult or uncomfortable. And yet, for the first 10 or so years of my time as a mountain biker on the North Shore, eyewear wasn't really a consideration. On the North Shore, we got our start riding on slow, janky trails under a densely forested canopy. Sun? Only a factor on the way to and from the trails. Wind? Not an issue in these protected zones. Dust? Ha! Maybe between August 15th and 25th. Mud? Refer to average speeds of 4-7 km/h and two-hour rides that cover only 10-15 km. And if you don't build speed often, your lenses will constantly be fogged up. So, most of us were willing to forego a little ocular protection in exchange for one less thing to worry about, even if it meant our eyeballs were subject to the occasional branch, and eyes ejecting mud for a day or two after every ride.

As trails have changed, speeds have increased, and all of a sudden some of these things have become real factors. It is now commonplace to reach speeds of 25 kph+ on a North Shore trail - even for an intermediate rider (see Bobsled or John Deer). There are days I don't wear glasses or goggles, but they are rare, and if I'm not wearing them, they're certainly in my bag. 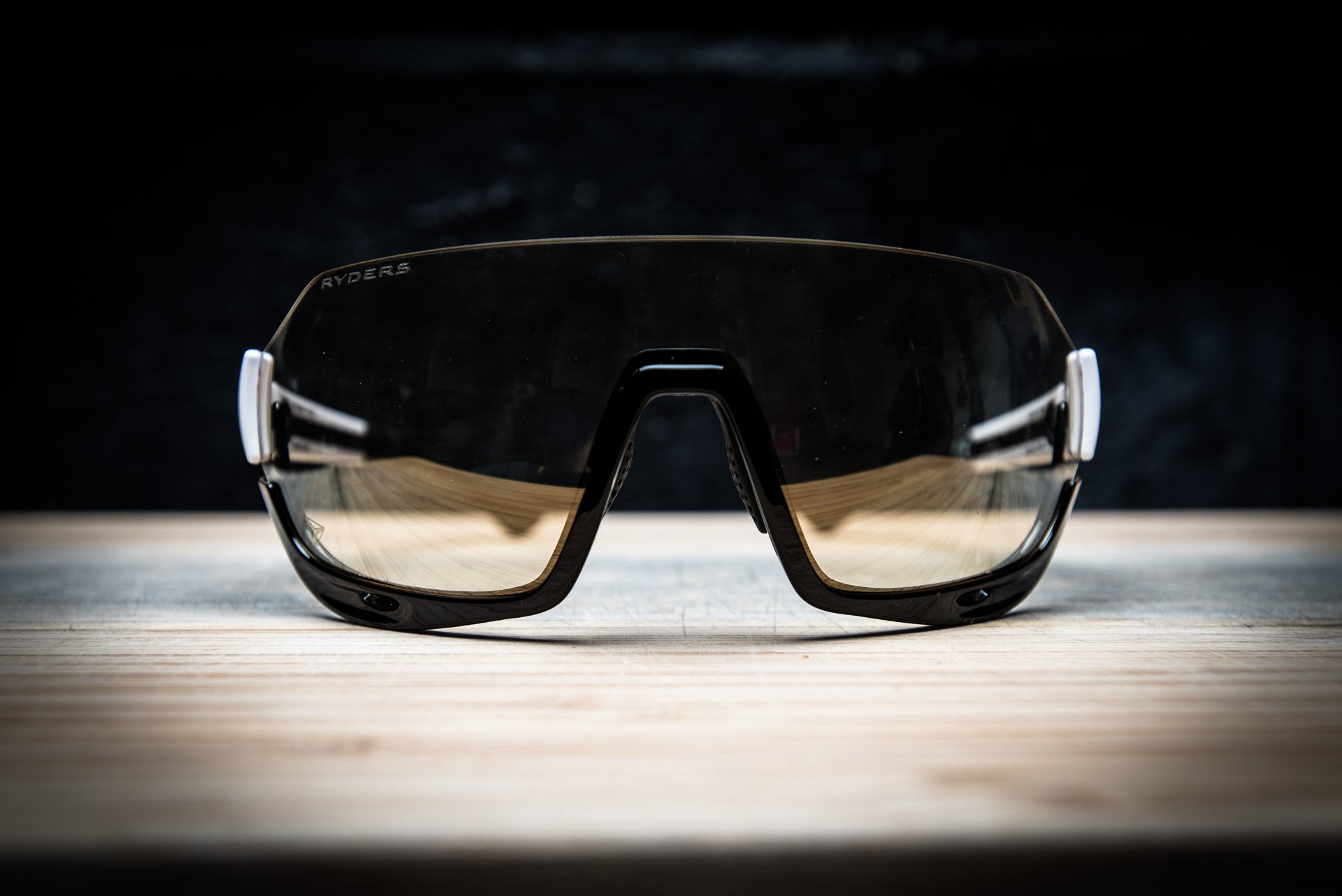 The Roam frame comes in three colours - each with its own tint option. 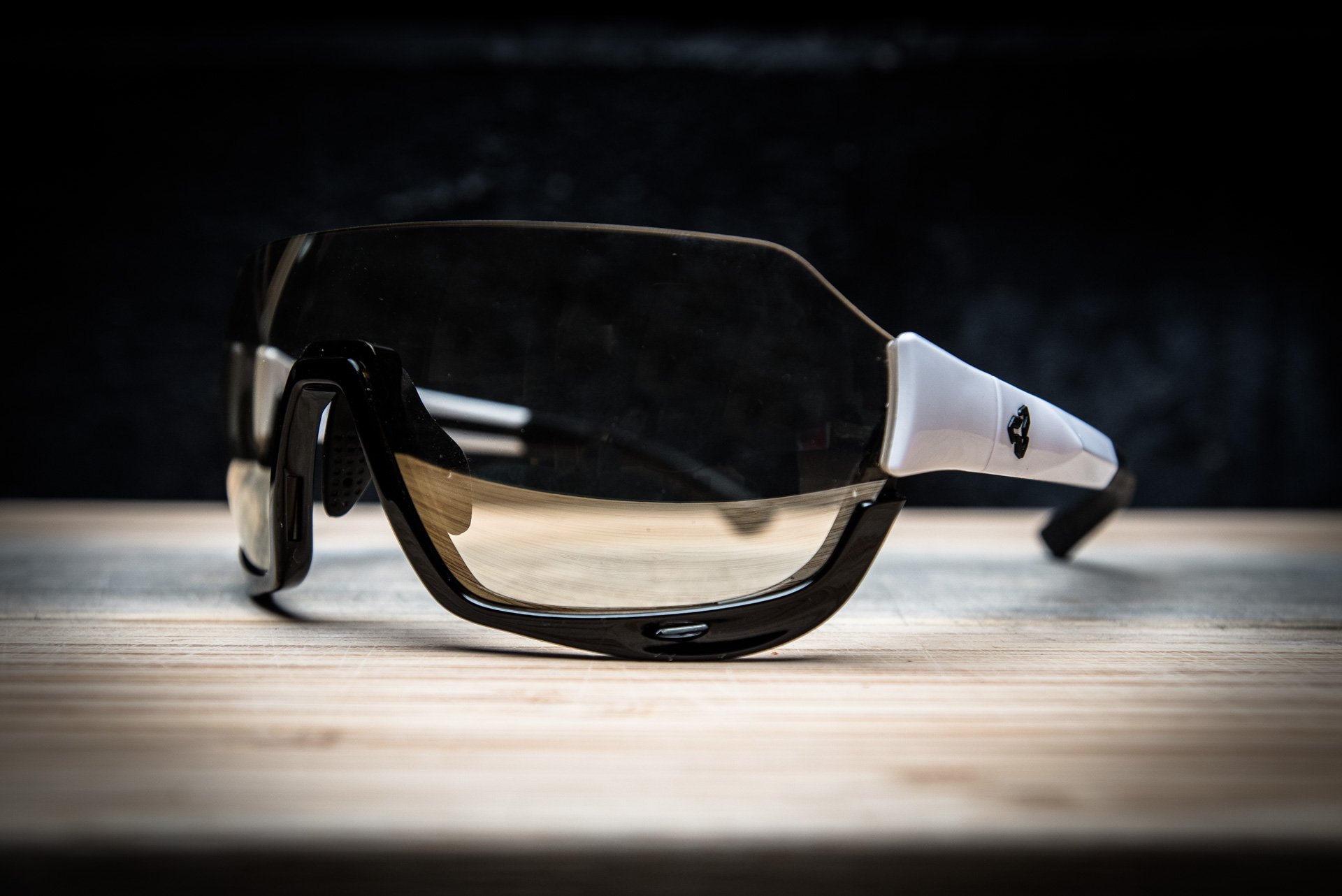 Nose and ear pieces can be bent into place to ensure a good fit. 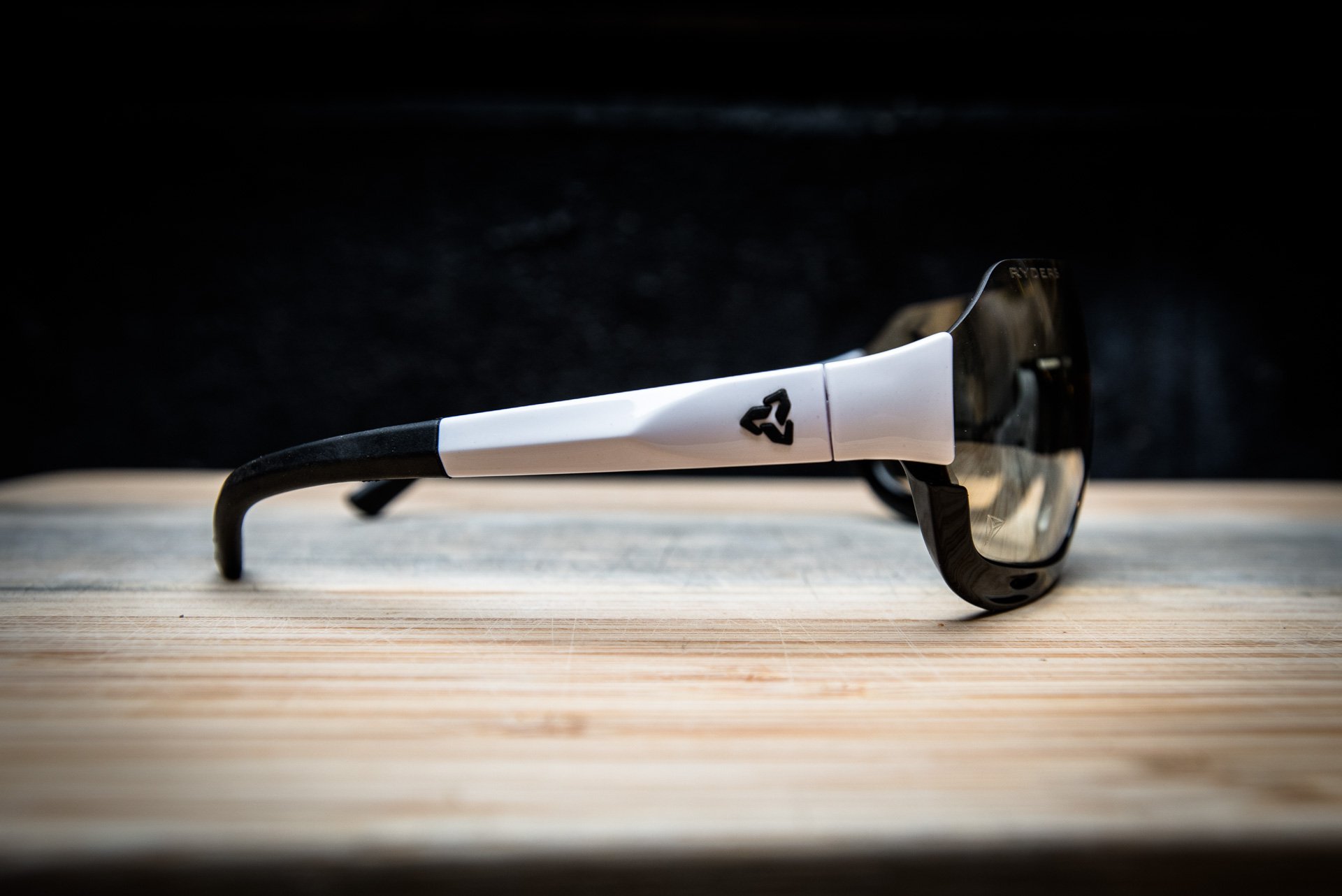 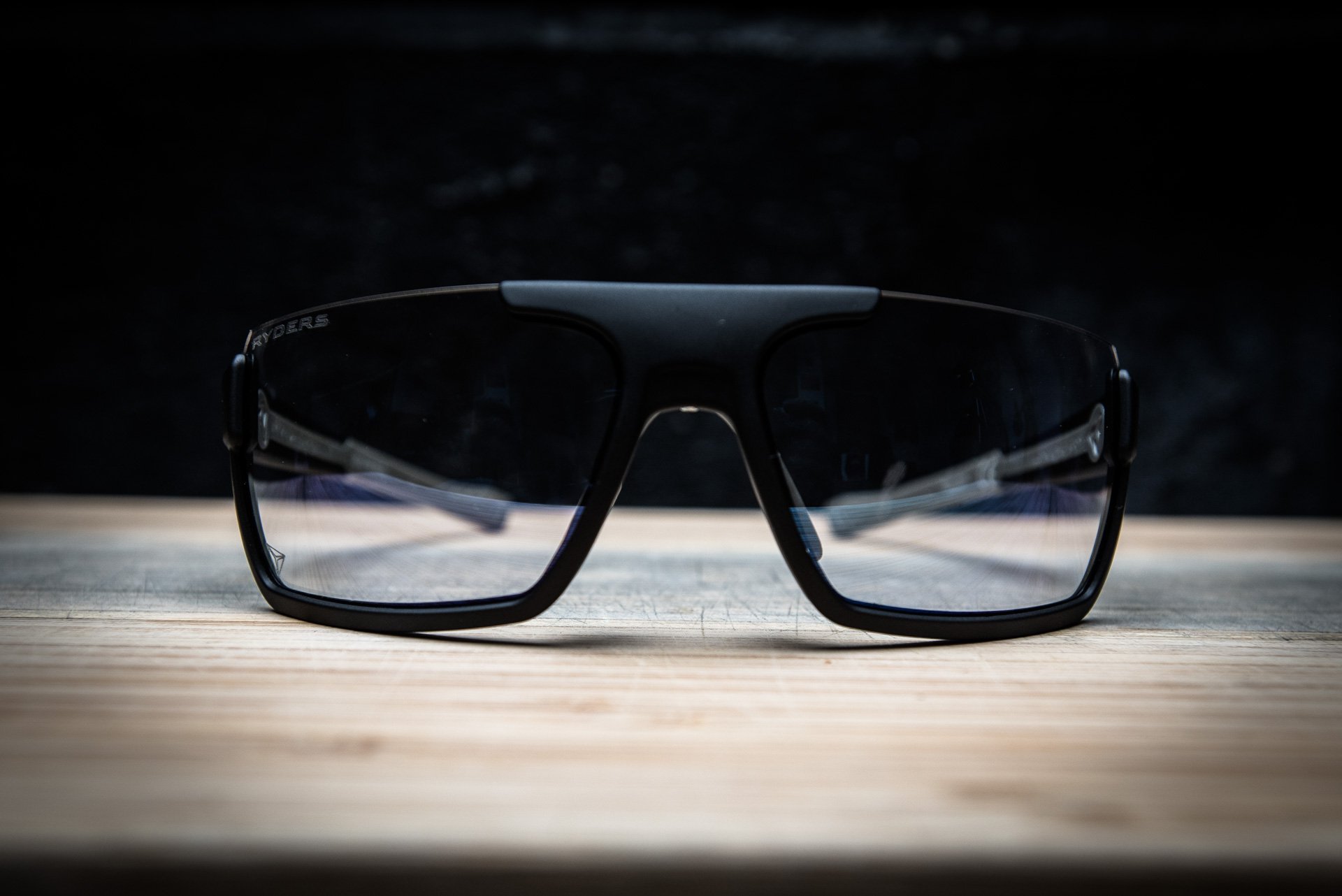 The Seventh is the other frame currently offered with FYRE lens technology. 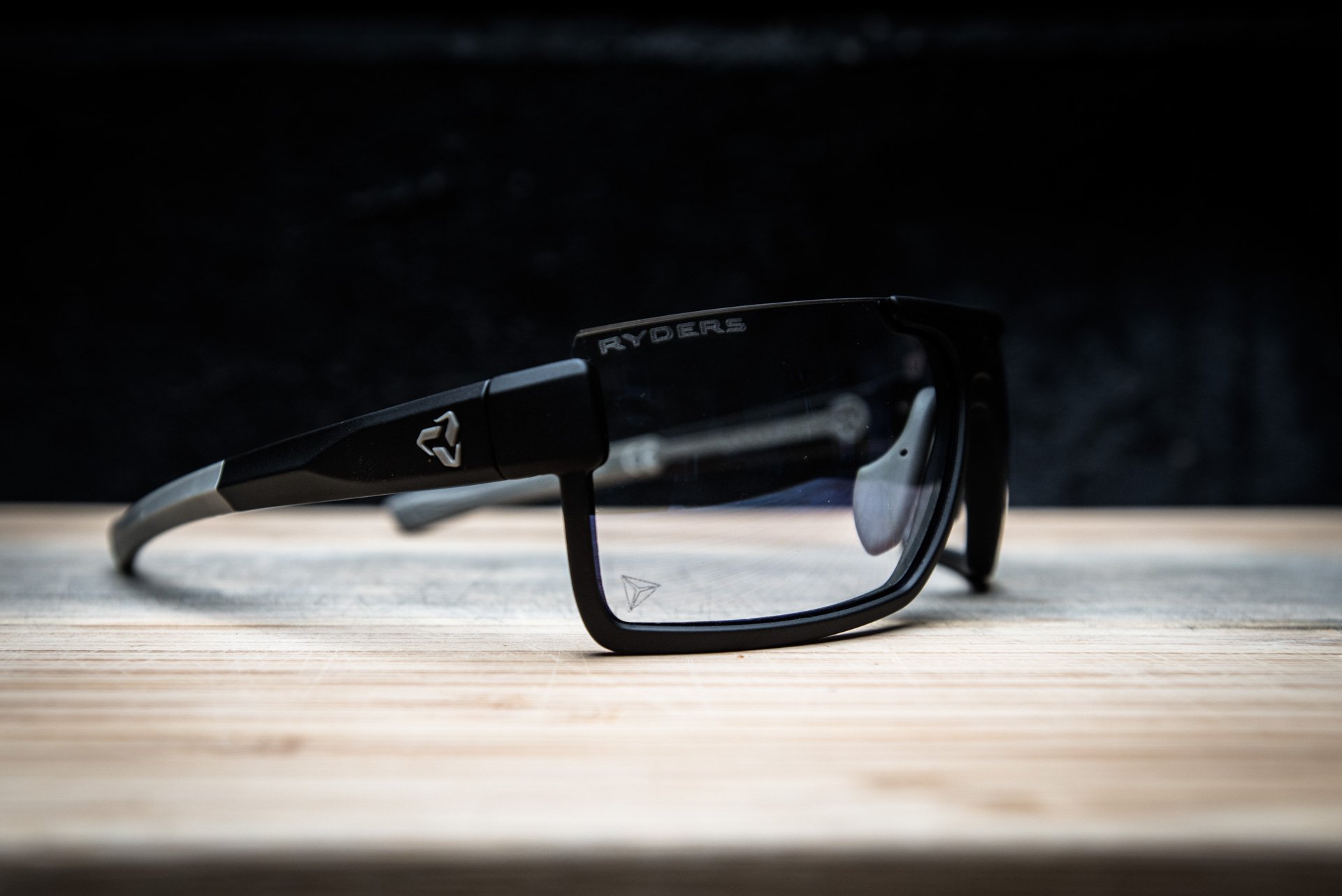 Still, this is the land of clear lenses, even in summer for me, since my eyes aren't great in low light. Photochromic lenses actually work well for my eyes if the VLT is high enough, with the added bonus that you can wear them while riding or driving to and from the trails and still get some protection from the sun. Not all photochromic lenses, though. Yellow ones from Ryders are too dark for me. Clear --> grey ones from Smith do work, but I have to keep moving or they fog up sometimes.

In short, I have fussy eyes. But just like the North Shore is one of the hardest tests for bikes, parts, and jackets, it is also a place where eyewear is put through the ringer.

Today, Ryders are announcing a new type of lens called FYRE. It is unique to the industry because it combines several features that have never all been included in a single lens before. It is unique for Ryders because it is the first premium-priced product from a company that built itself based on affordably-priced sunglasses. They've been inching up the cost scale over the last few years, with features and designs to match, but this is a bigger step up.

Ryders first clued me into FYRE some time ago, and I've been looking forward to trying it since hearing about them. A photochromic lens that delivers enhanced contrast (ie. good performance in really low light), as well as their celebrated antiFOG coating on the inner lens? Yeah, I was definitely intrigued. They sounded good, but I'm also accustomed to hyperbole, so even though I believed the chaps at Ryders, I also knew I'd reserve judgment until I'd tried them in some classic shore conditions. Only then could I judge.

They finally spotted me a pair a few weeks ago and I've logged about six rides with them. Enough to know that the Yellow-Brown photochromic lens (one of three options and the one most suited to trail riding in dark light) works well for me in the low light conditions of a closed-in North Shore day. Enough to know that antiFOG works even when working hard, in heavy rain, for more than two hours. The tint is light enough that, even in dark sections of trail, I don't wish I could lift them, even for a few quick moments, because I can't see what's around the next dark corner. I put them on from the time the ride starts, and never take them off with one exception: when it's so wet out that the mud covers the lenses. For that, there is no technological answer. 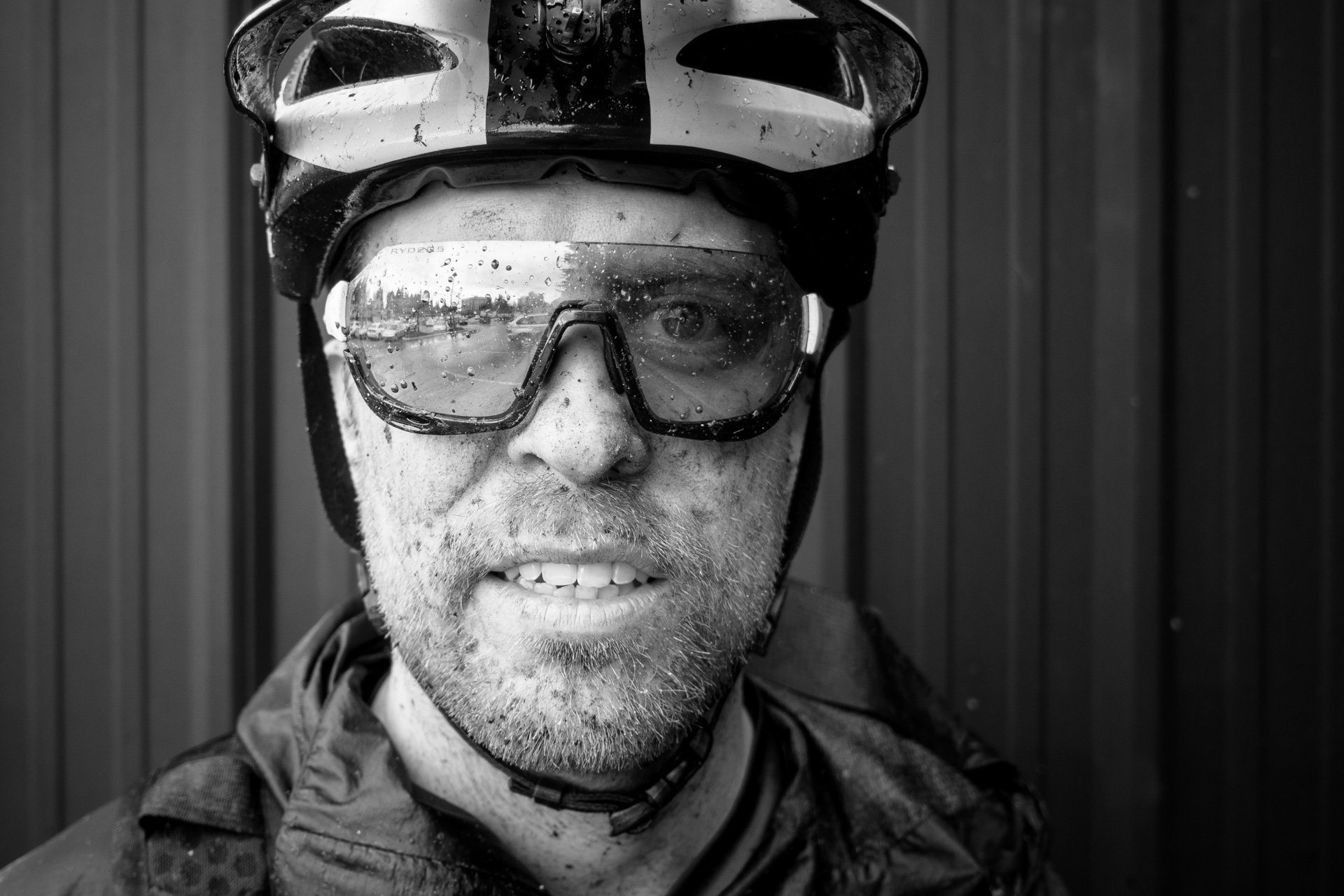 The new Ryders Roam frames kept a LOT of mud off my face on a day when the rain never seemed to stop - until our ride was finished.

Here is a brief rundown of what is going on with FYRE, launched today in two frames: Roam (tested) and Seventh (Andrew Major is using a pair and loving them equally well).

Varia is their photochromic technology, which changes colour slightly in addition to varying in tint. This means they can tune it to the unique conditions each lens was designed for. In the case of the one I'm using (Yellow to Brown), it enhances contrast and your perception of details. That's important when it's dark and murky - our usual situation on the shore.

antiFOG doesn't need much explanation. Ryders uses a permanent coating on the inside of the lens. It works, but there's a caveat: at a certain point, the lens can become saturated and then you need to 'reset' the coating, either by wiping it or by rinsing with water and letting it dry. So far it has worked well for me, even on a couple of days when 'saturated' described everything I was wearing and everything I could see.

Colour Boost is also as it sounds. Similar technology to Smith's ChromaPop. Most people like it but I've also spoken to a few who don't like the enhanced colour profile. I do not find it to be too pronounced. In the forest, I'm very impressed with it in these lenses and don't find myself wondering if I'd see better with nothing over my eyes - a common thought when it's really dark and crappy out. Unlike typical yellow lenses, the light version of FYRE feels neutral, meaning I feel like I'm not giving up any light transmission in exchange for wearing them, which is surprising.

The NXT Lens itself is a material used in fighter jet canopies. So, great optics but also very robust and protective.

The nose and ear pieces use a rubber that stays nicely in place whether wet or dry. Inside, they have a metal strip that you can bend to fit your face. It's essential to get fit right - the lenses can't be so close to your face that air isn't allowed to circulate, but they need to sit close enough to protect from wind and flying mud and other debris. The Roam frame (and others) can be worn two ways: frameless, which many prefer (especially roadies) is light and airy feeling. Or with the frame on the bottom which provides protection in a crash (the bottom part of the lens can be driven into your face in a crash and give you a shiner, or worse). Removing the frame from the top of the lens also improves sightlines. Imagine your riding position: when you're bent over the bars, you're looking out the top half of the lens. Eliminate the frame and you have an unrestricted view. Ryders calls this design Invert, and they have a patent on it.

We often say the best compliment you can pay to a component you're reviewing is that you hardly notice it - in fact, everyone says it and it's a tired cliché. But with eyewear, it is never more true. This is the worst winter we've seen on the North Shore in over a decade, and I've continued to bring glasses or goggles along on rides, but they often stay stuck to the back of my helmet or in my bag. FYRE is brilliant because it does everything it claims to do, and in the shittiest conditions you'd ever want to ride in. These are the best lenses for North Shore riding conditions I've ever used. Dark, wet, and steamy - the FYRE lenses dealt with it all. Highly recommended.

FYRE will be available in a number of lens configurations and frame options starting April 5th, in bike shops and online. Pricing will be between $220 - 240 CAD. Depending on where you live and ride, there are three different lens tint options, each tuned for slightly different conditions.

To check out frame and lens options and for more info, head here. 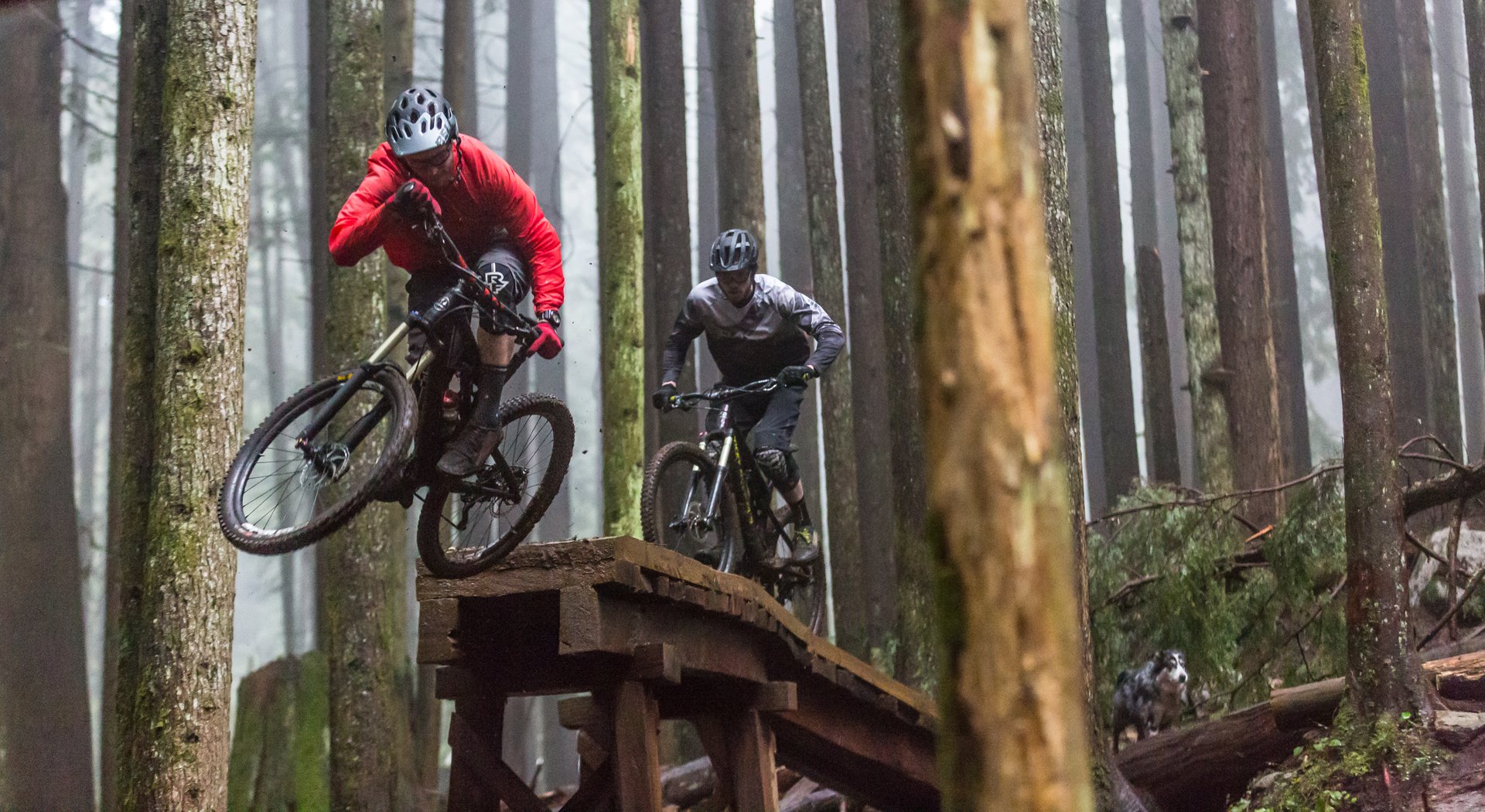 Dylan Forbes and Eric Lawrenuk playing with FYRE on a typical dank day on the North Shore.

Timely; looking for some new shades as my prescription ones fog up any time I stop moving.  How did you find the yellow-brown lens in bright conditions?  Not quite the same tree coverage here in sunny Saskatchewan, heh, but there is some...

Is Andrew using the Seventh or the inverted version Incline?  Kind of digging the Incline over the Roam, but just need to decide on lens colour.

I'm using the Incline. They're awesome.

I mean... they definitely look a bit funny but the design principle makes perfect sense. The lower frame sits near my face and helps keep crap from getting inside the lens. The open top allows moisture to easily escape.

The price tag is high but justifiably so I think for premier tech and high function (if not fashion) design.

The lenses do absolutely clarify/enhance what I'm looking at but Ina subtle/organic way. It's not like wearing coloured lenses which annoy the hell out of me.

I've used a number of different light adaptive lenses and none change as fast as the new FYRE.

I should say I have the grey/grey lenses.

Since I got them we haven't had any bright weather, and it's never bright on the trails on the north shore, so I can't comment on how they are - yet. With that said, the yellow-brown is recommended for "low to bright" conditions, as are the grey-grey. For easy reference, here's Ryders' guide on the lens options and their characteristics:

Based on that, you might go grey-grey although it may depend on what you want for definition enhancement.