The final round of the Enduro World Series was a suitably dramatic ending to a season that encompassed eight rounds across eight countries and three continents. 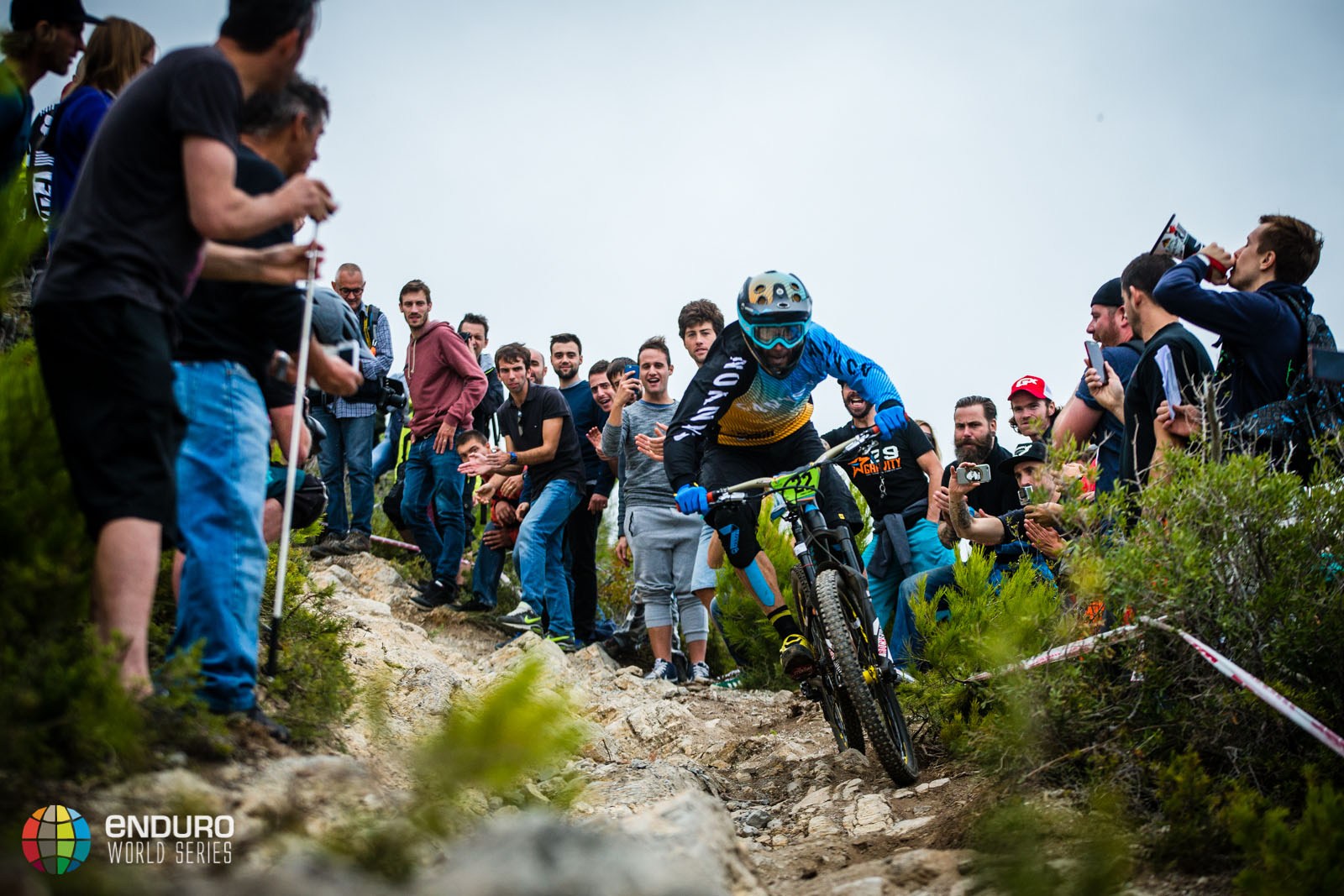 If he sticks to his word, this is the last time we’ll see Fabien Barel on the biggest stages. Unsurprisingly he went out at the top of his game.

On the shores of the Mediterranean in Finale’s famous town square, Richie Rude and Tracy Moseley were named as the 2015 Enduro World Champions. And it was in the same setting that Fabien Barel and Tracy announced they would be hanging up their helmets and retiring from racing. 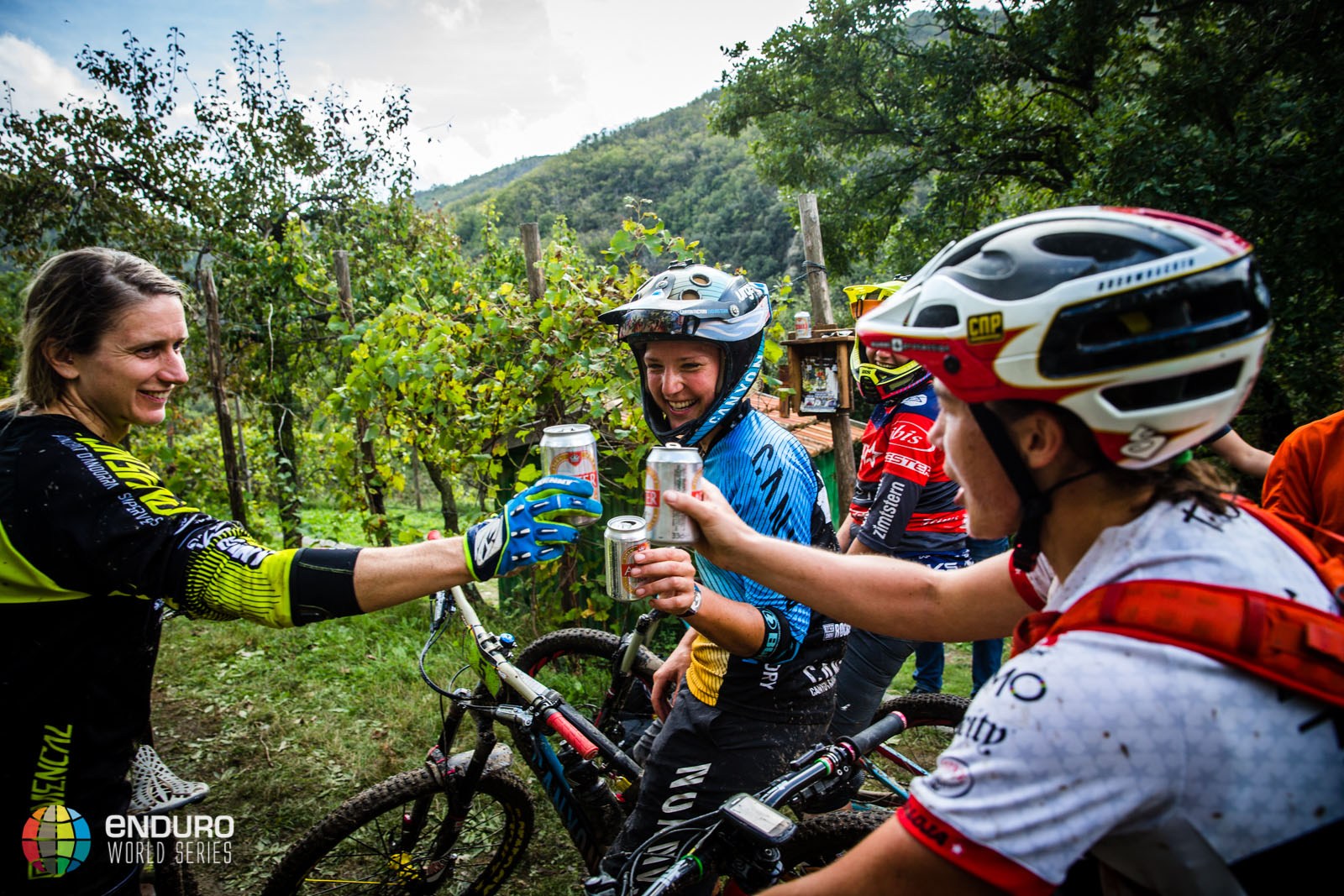 Beers? Tracy Moseley (right) is in. These were left on the course with a sign saying “Free Beers – you might forget the uphill section.” That’s our kind of racing!

The Superenduro powered by SRAM was the tightest fought race in the series’ history – with the top three men all within 2 seconds of each other. It was Jared Graves (Yeti/Fox Shox Factory Team) who won the race, with Fabien Barel (Canyon Factory Enduro Team) and Nico Vouilloz (Lapierre Gravity Republic) not far behind in second and third respectively. After 20 years of racing each other all around the world, less than a half second separated Barel and Vouilloz. But it was young American Richie Rude (Yeti/Fox Shox Factory Team) who eclipsed them all. Despite coming 11th in the race, he was named the 2015 Enduro World Champion after an incredible season. 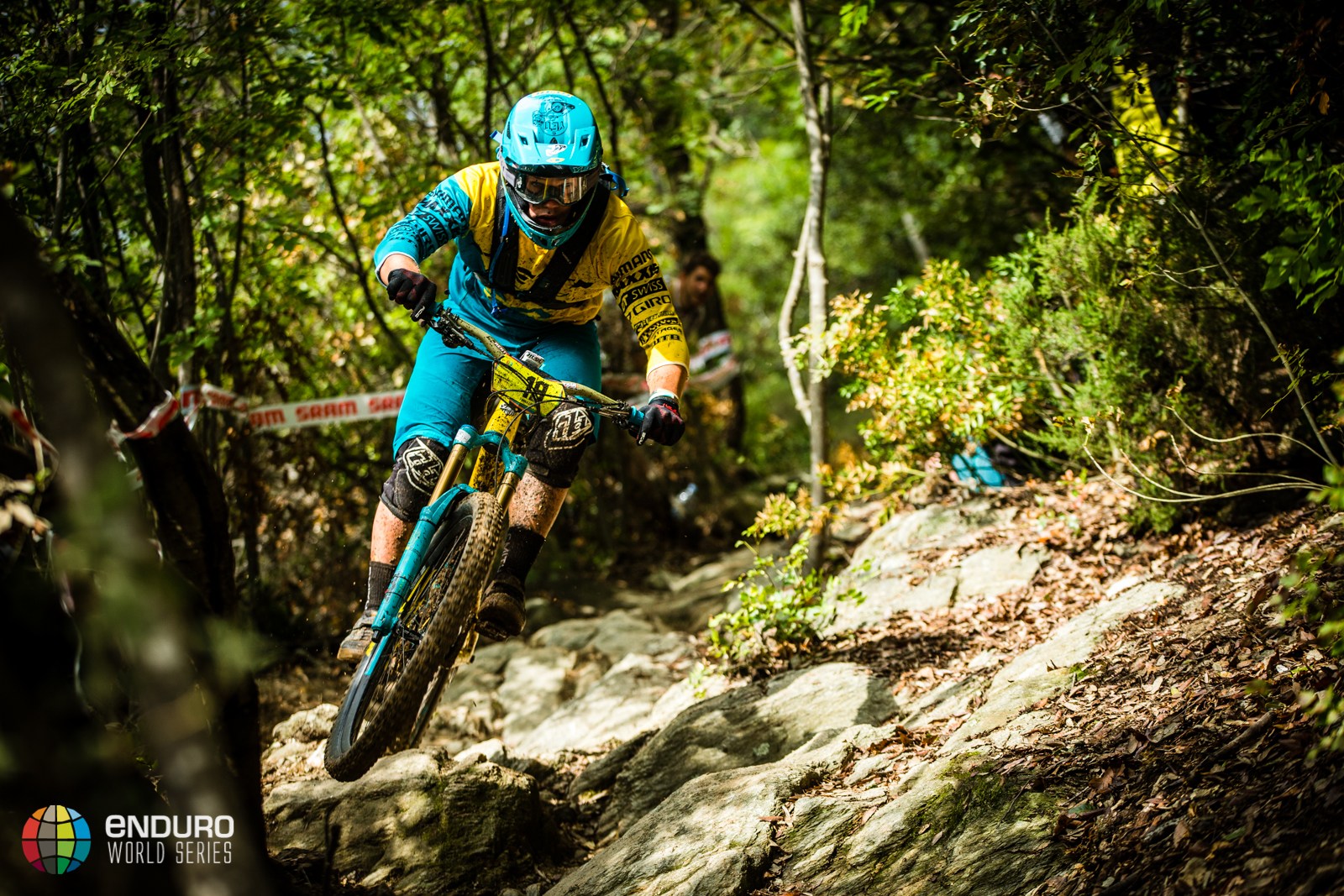 Surprisingly Richie Rude lost the competition for best name to win the EWS in 2015 to the Masters Champ – Woody Hole. 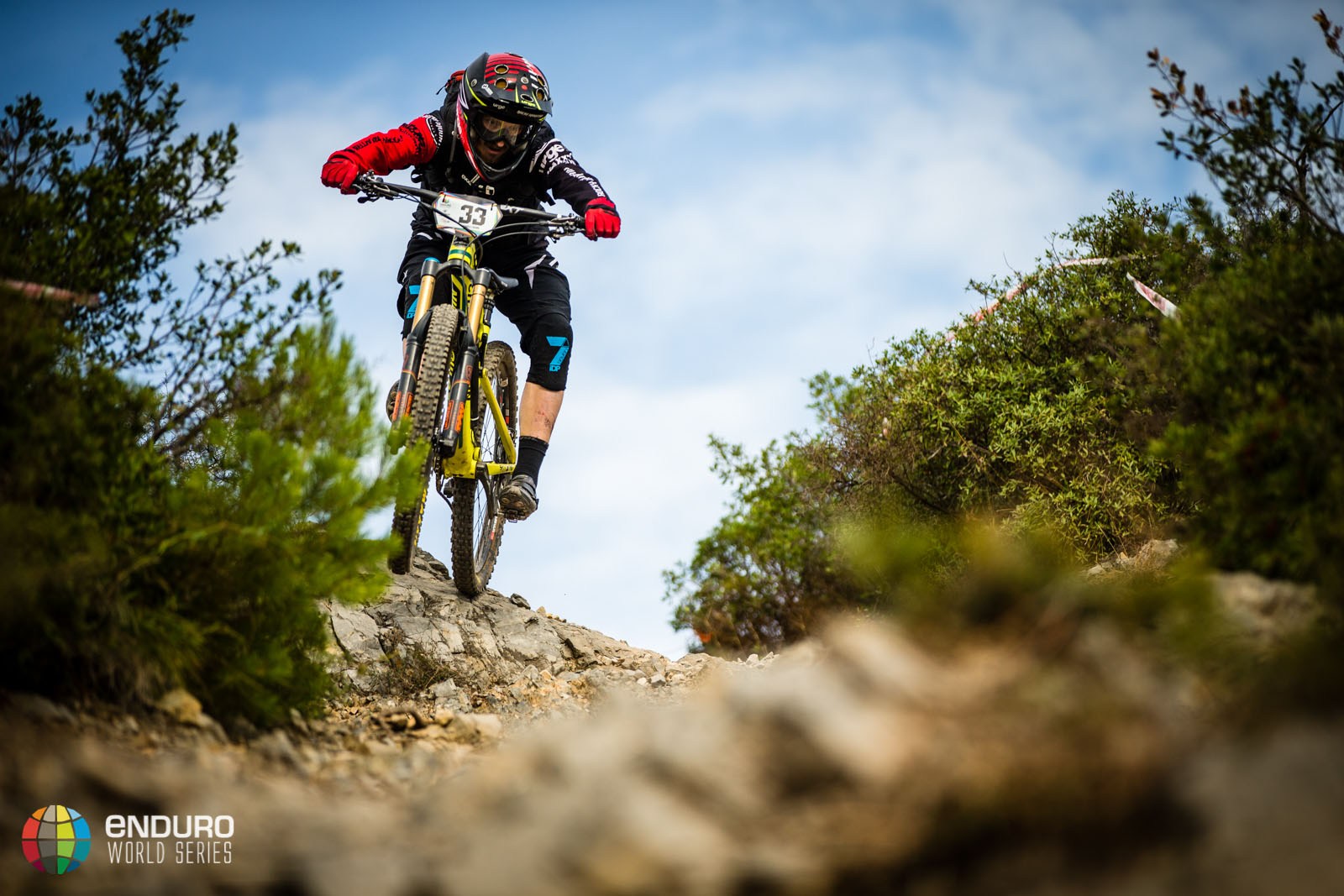 Whistler’s Jesse Melamed is still returning to form after missing much of the season due to injury.

In the women’s race, it was Tracy Moseley (Trek Factory Racing Enduro Team) who triumphed in both the race and the championship as she claimed her third Enduro World Series Champion title. Her closest rival, Cecile Ravanel (Commencal Vallnord Enduro Team), had to settle for second place in both the race and the series. Ines Thoma (Canyon Factory Enduro Team) took her first trip to the EWS podium, after placing third in the race. However, a consistent year from Anneke Beerten saw her take third in the overall series points. 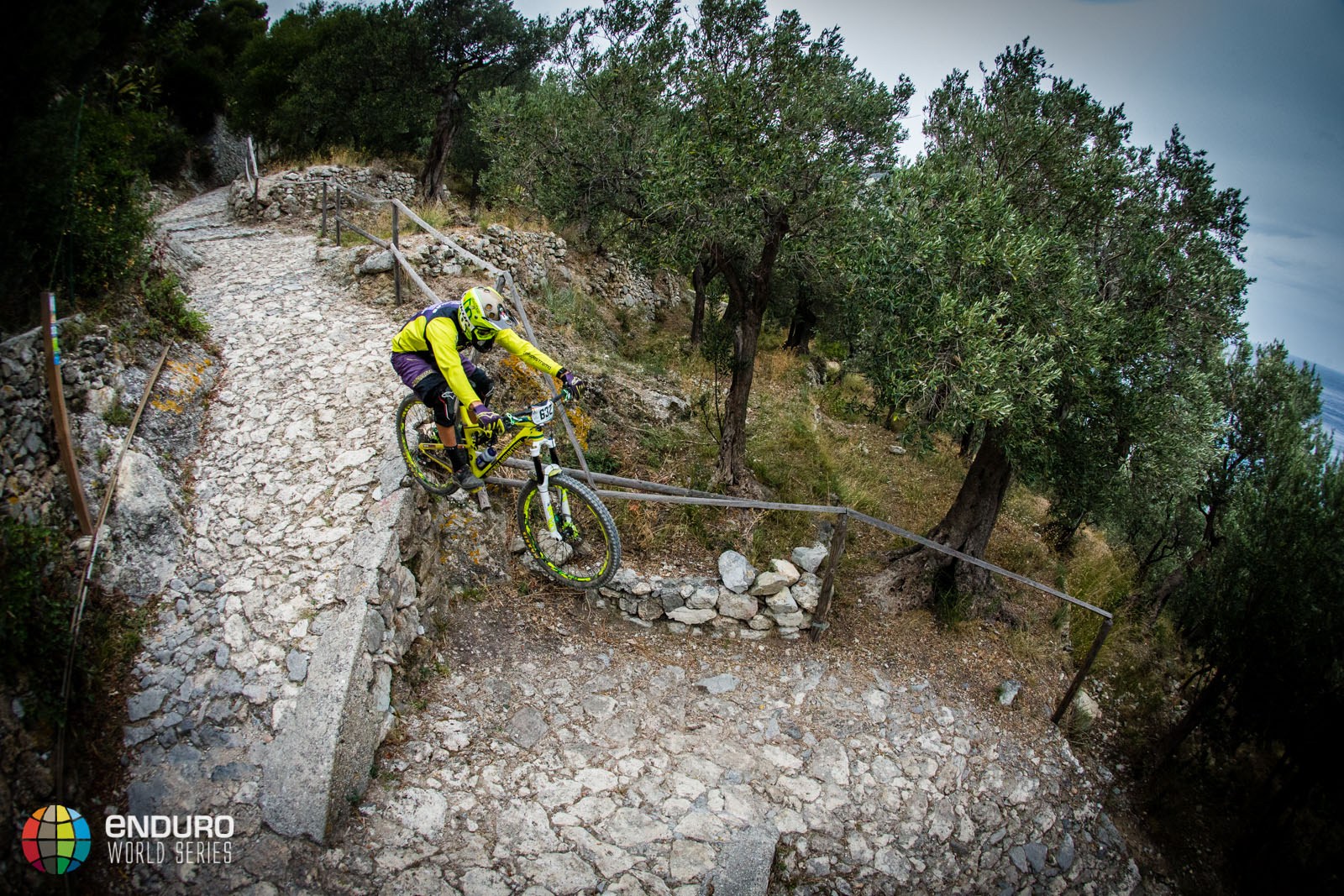 Matteo Raimondi showing how you cut the course Italian style.

In the U21 Women’s category, it was young rider Axelle Murigneux who was named World Champion, whilst fellow French rider Adrien Dailly (Lapierre Gravity Republic) took the U21 Men’s category. Woody Hole was named Master World Champion – not bad for a man who had a hip replacement just 18 months ago. A jubilant Canyon Factory Enduro Team took home the Team title. 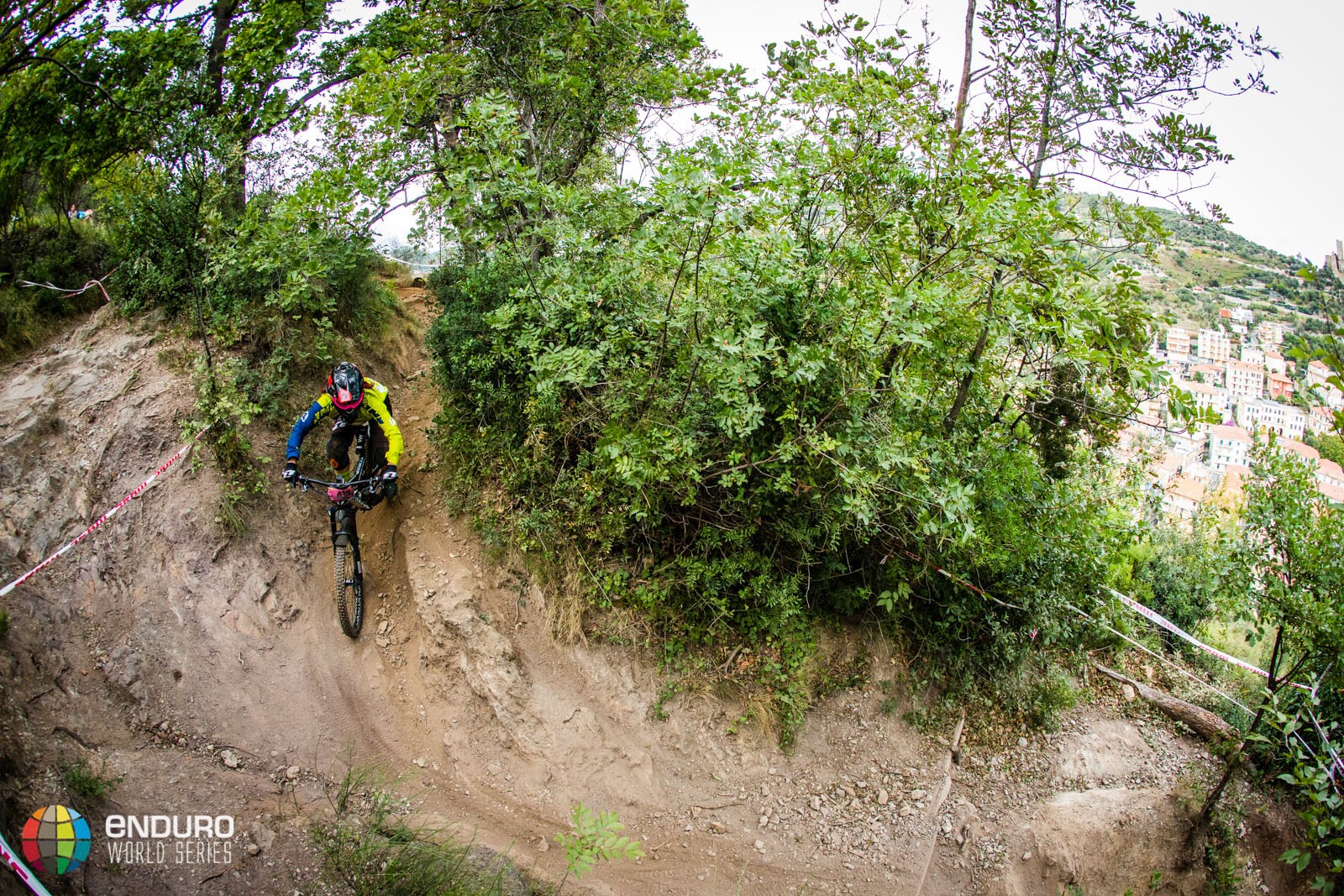 Laura Rossin dropping in with the town of Finale Ligure in the background.

Speaking after her historic win, Tracy confirmed she wouldn’t be back to defend her title.

“It feels surreal – all of this year has been about getting to this point and winning this title and making it a third time. but it’s time to move on to the next stage of my life. I haven’t actually made any plans for the future – everything has been about getting to this point and ending on a high. I won’t be defending my title but I’ll still be around and you’ll still see me riding my bike. I’m looking forward to seeing how the EWS evolves – it’s been an amazing three years and it’s probably the most fun I’ve had on my bike ever. I’m excited to see where things go in the next few years.” 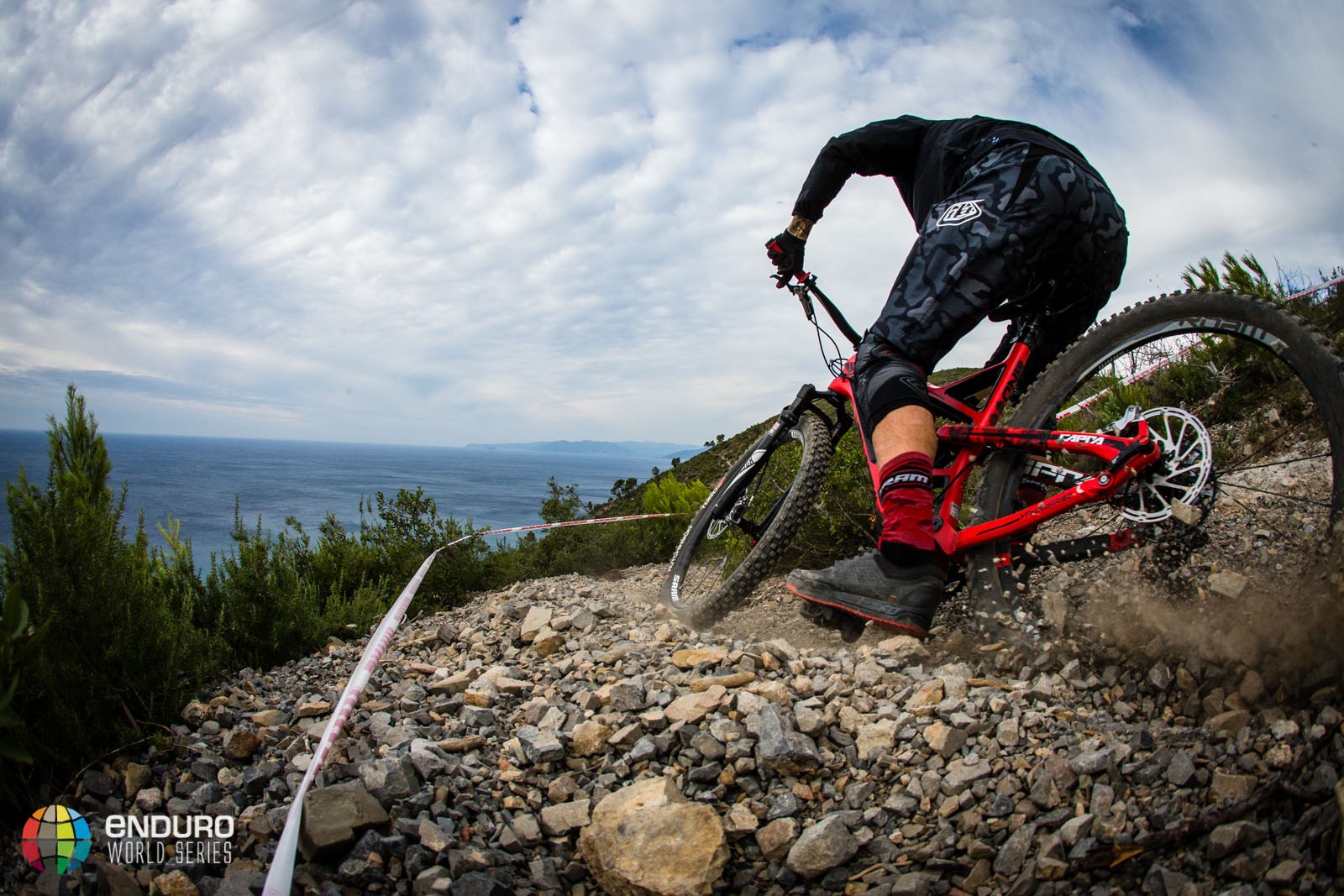 Bryan Regnier sprinting for the sea.

Richie added: “It’s always been a dream of mine to be Enduro World Champion, but I didn’t think it would happen in the second year. It’s out of this world.” 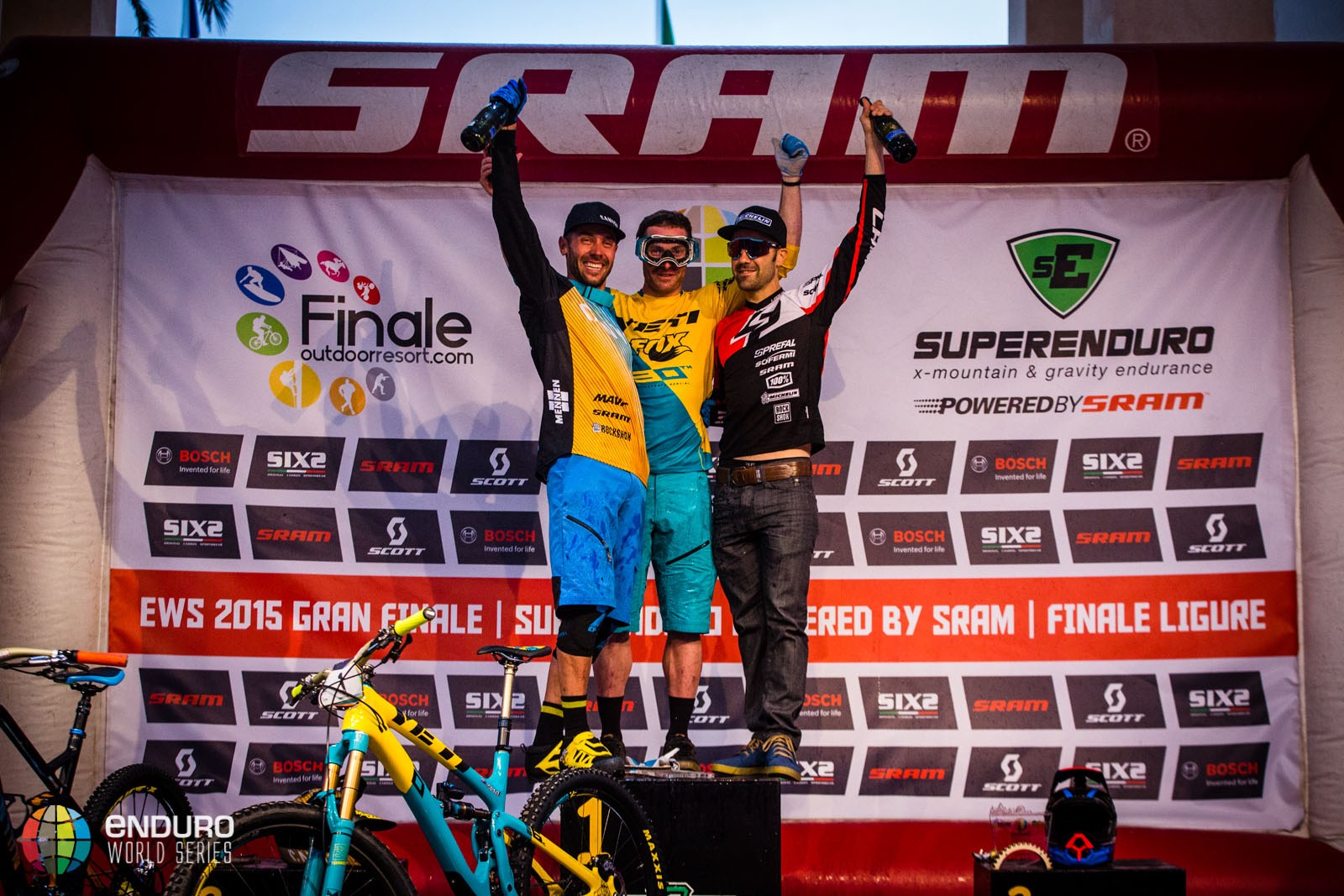 And Enduro World Series Managing Director Chris Ball said: “Wow. What a year. It’s had its highs and lows, emotions and drama. From the native jungle of Rotorua to the Italian Riviera in Finale, the racing has been tighter than ever, the boundaries pushed even higher and the championship fought to the very end. With a stream of young talent rising to the forefront, 2015 will be a season to remember and the future looks bright. Congratulations to our champions and thank you to our fans, supporters and the enduro community” 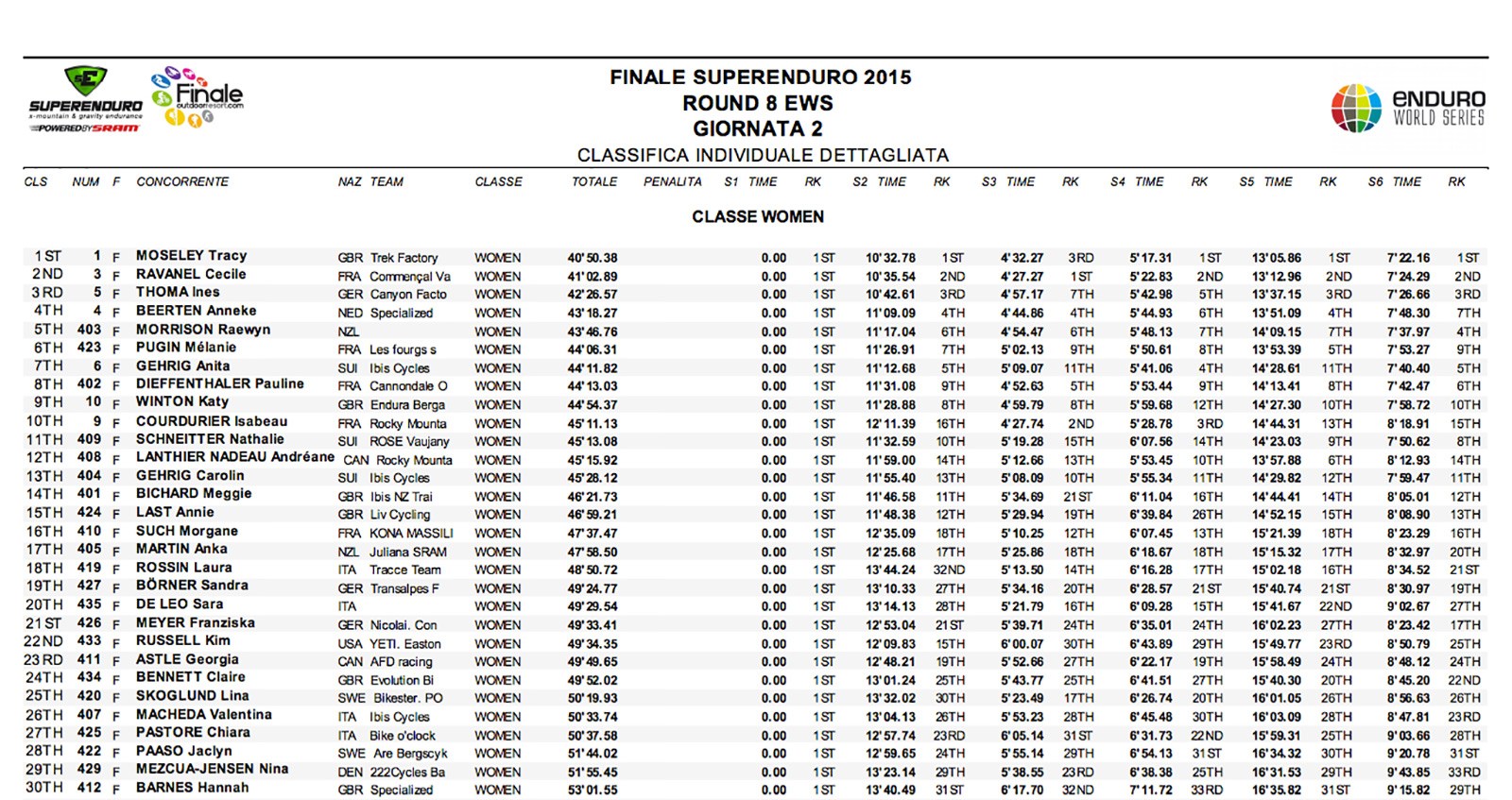 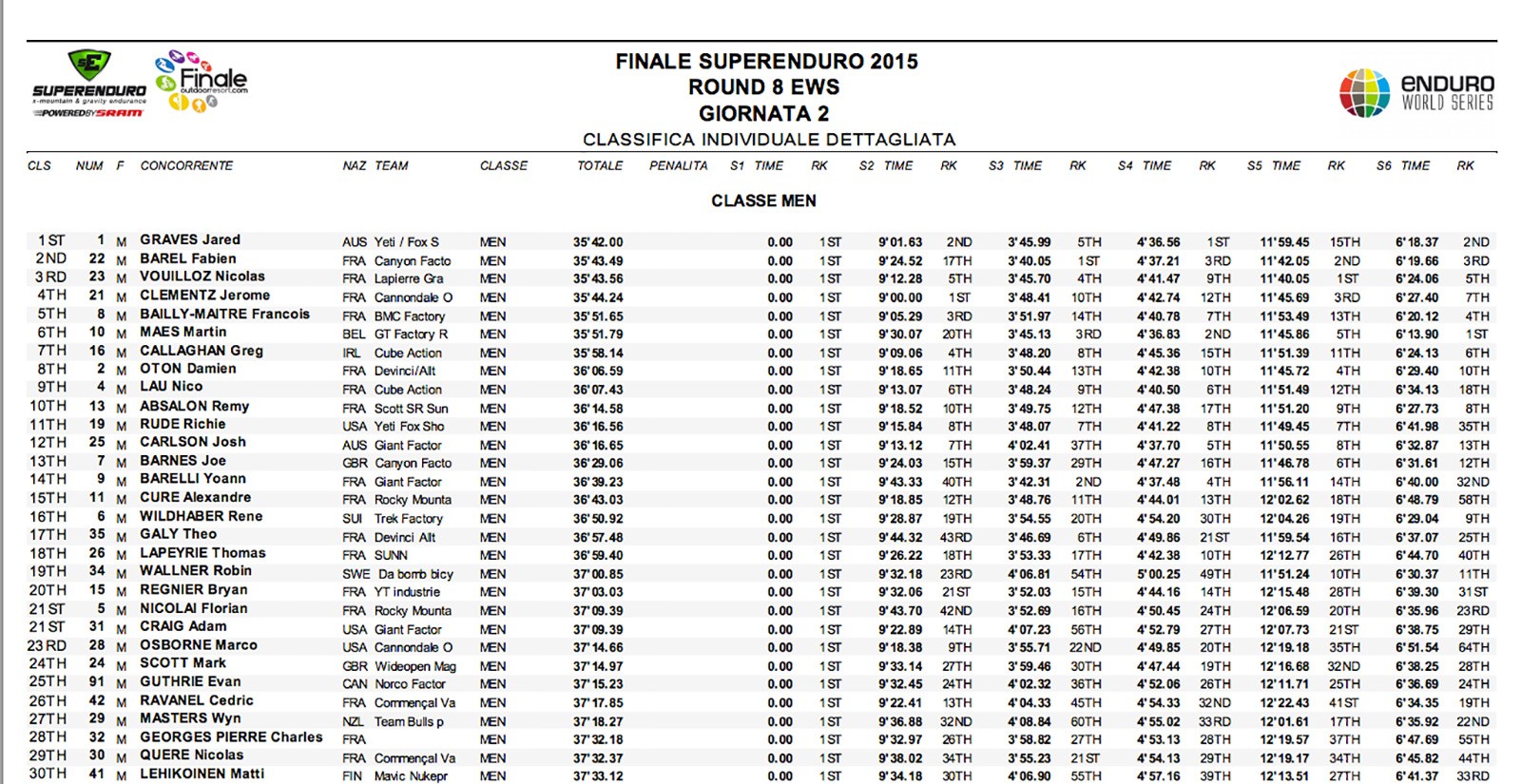 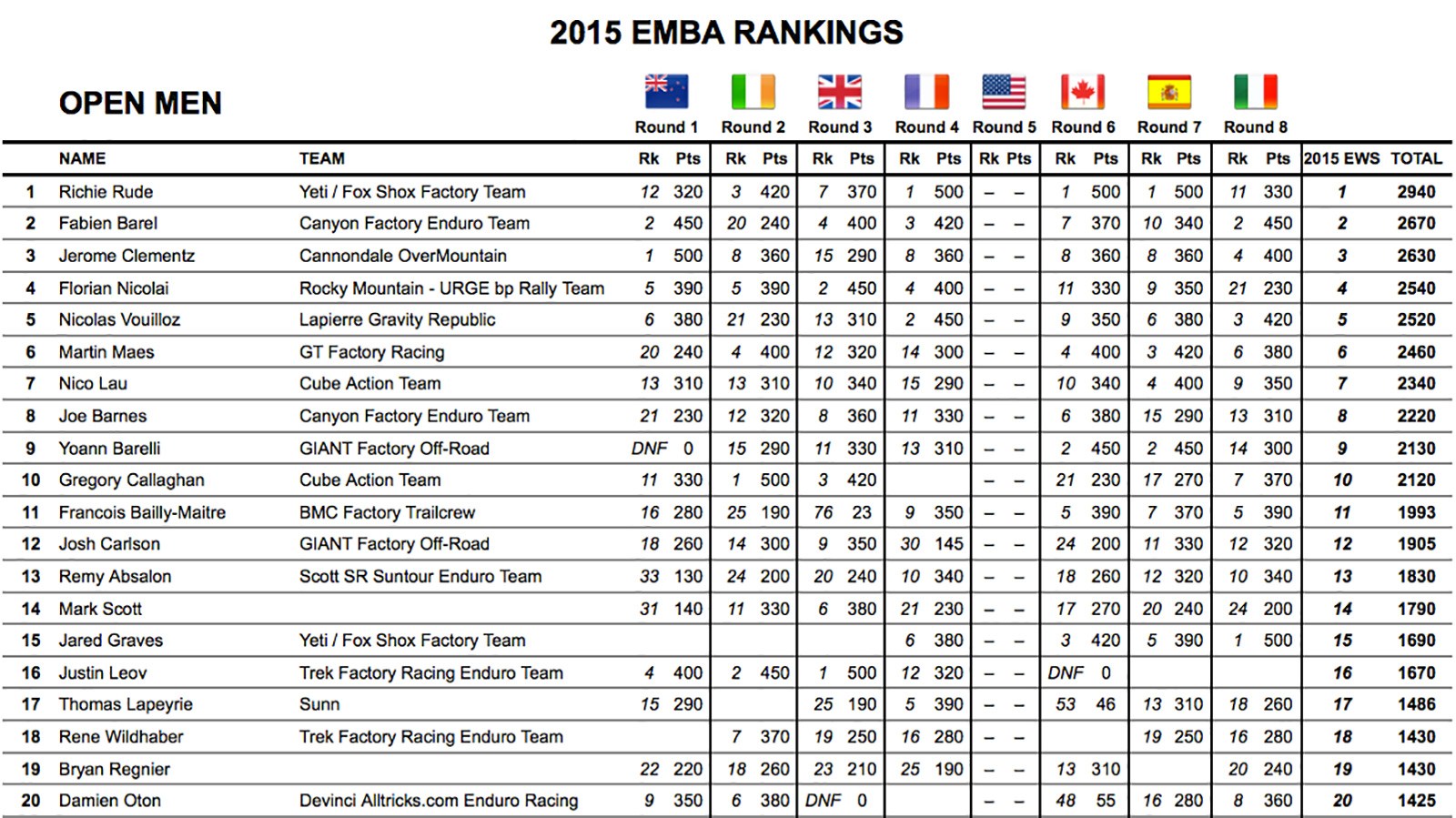 It takes a lot to win the overall. Three riders who won one round missed others because of injury. 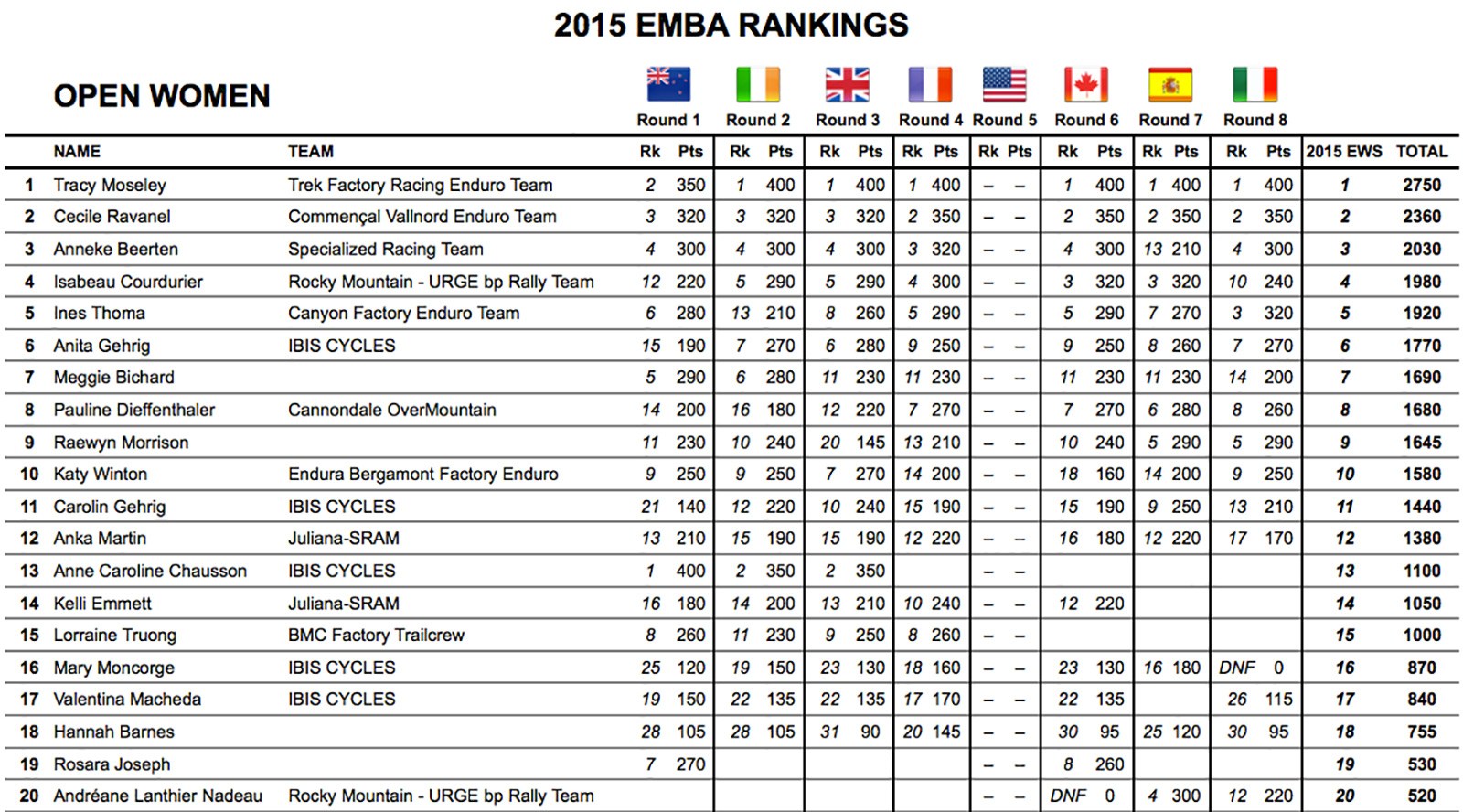 Tracy Moseley showed how you fend off a strong competitor like Cecile Ravanel.