A new inverted fork is a huge topic of discussion and you might be surprised to see RockShox putting this product to market with existing fork technology working as well as it is right now. The inverted chassis presents unique problems for engineers, but – as proven by the fact that RS-1 is coming to market – it does have its upsides.

The biggest challenge in creating an inverted chassis is achieving both stiffness and competitive weight. The RS-1 is in fact slightly heavier than the SID it replaces, but that weight is in smarter places. The fork will be 29″ only, and available in 80, 100, and 120mm travel, with a volume-adjustable air spring but no external compression damping adjustments. 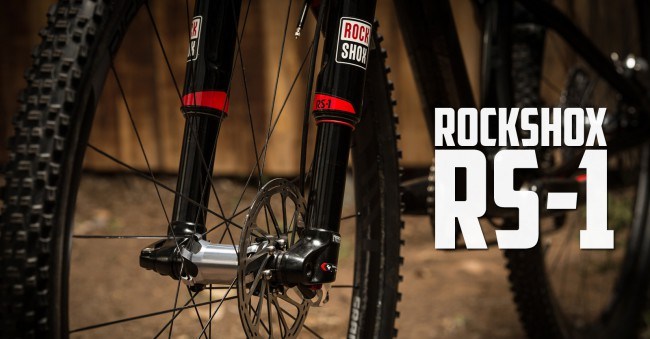 The obvious question is: why inverted? SRAM’s most vocal answer was ride quality. Because the bushings sit much closer to the axle, an inverted fork is very stiff – provided you can solve the axle interface problem. Front-to-back bending forces are minimized, which means on-off brake chatter should not be an issue on this chassis.

The other performance-related answer was smoothness created by having the wiper seals bathed in lube oil at all times. The ride feel of RS-1, even though at 1666 grams it weighs slightly more than its predecessor the SID, is extremely light. You can tell more of the weight is down low in the fork. RockShox made a decision to pursue performance gains regardless of the increase in weight. 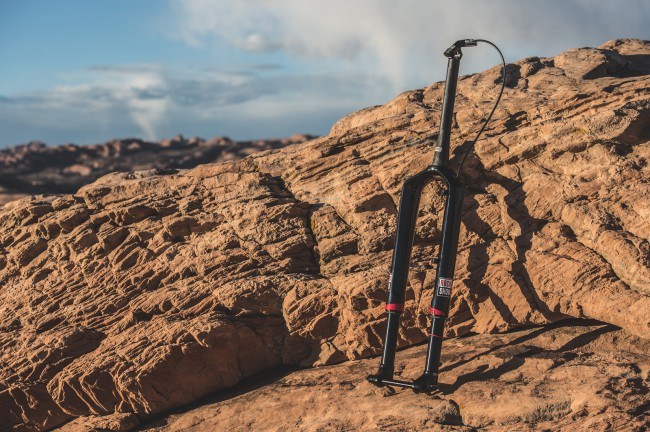 With RS-1 we see a full carbon upper and steerer tube which does stand out, but the folks at SRAM were kind enough to remind us that they have been producing carbon crown-steerers since 2001. The Solo Air spring is similar to that seen in the 2013+ Reba, Sid and Revelation, but now uses bottomless tokens like the Pike to adjust spring volume.

The RS-1 uses a new Accelerator cartridge damper which shares some similarities with the Charger damper seen in the Pike. While the Charger uses an expanding bladder to control fluid volume, the Accelerator implements an independent floating piston which constantly applies pressure to the oil in the cartridge. In the XC race environment where lockout is a desired feature, this allows for a smoother operating and stiffer lockout system. 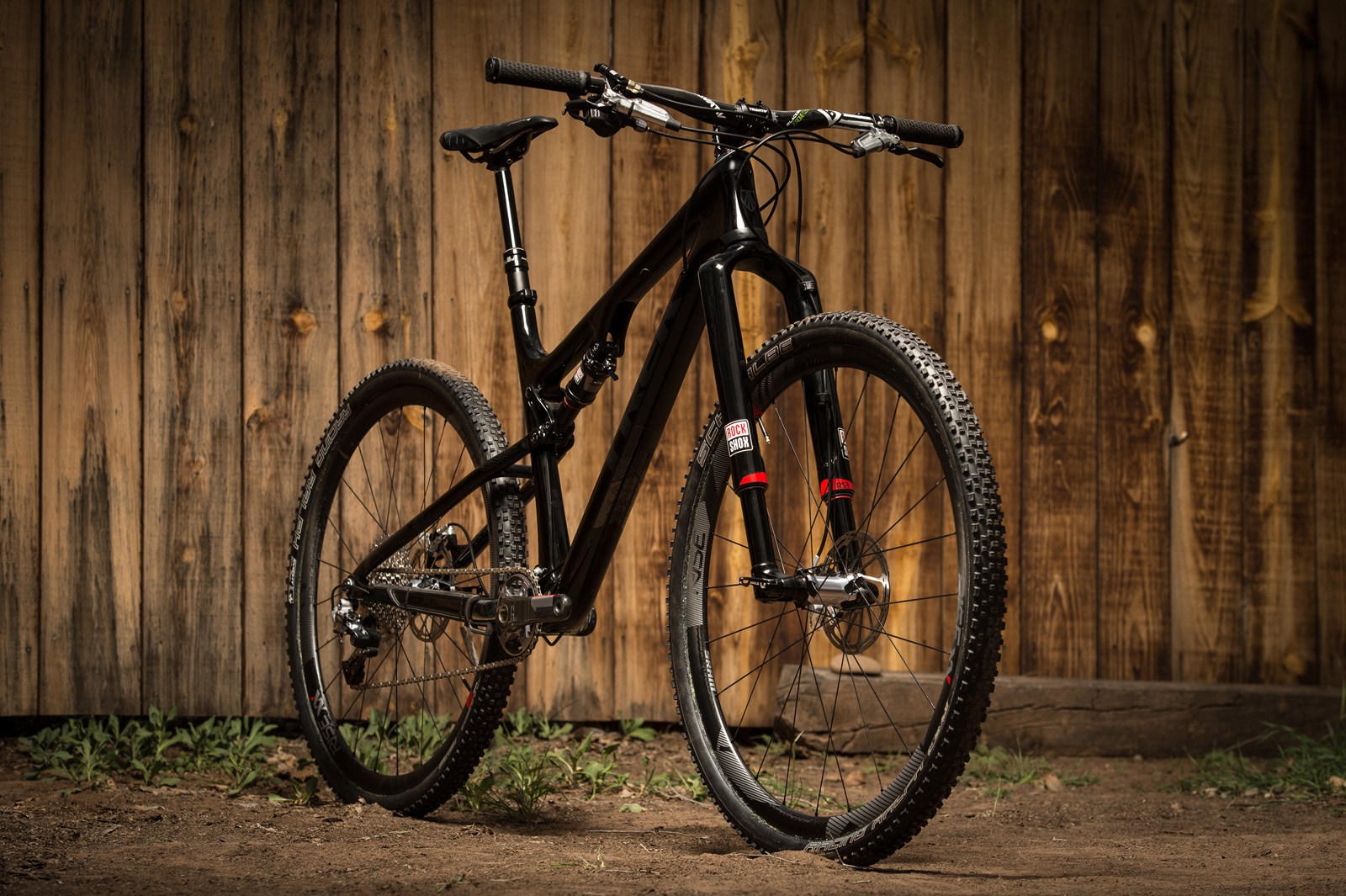 “It looks like the head tube just grew a fork out of the frame.” 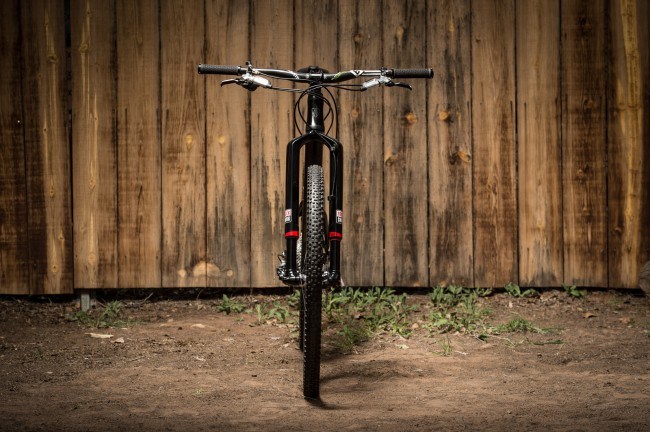 RS-1 completely changes the way the front of the bike looks. 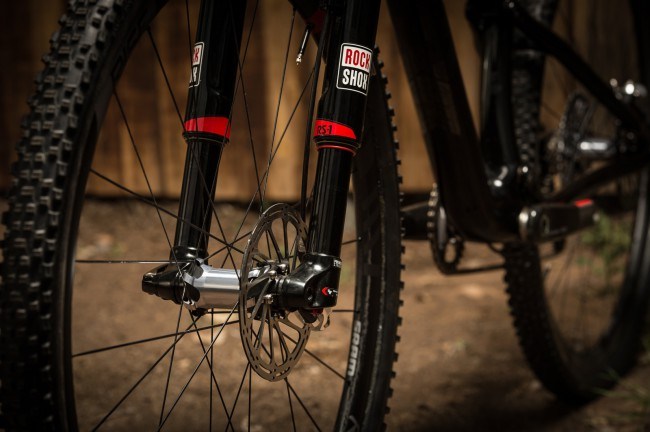 The carbon upper gets red and white decals as seen here, or a more subtle black. 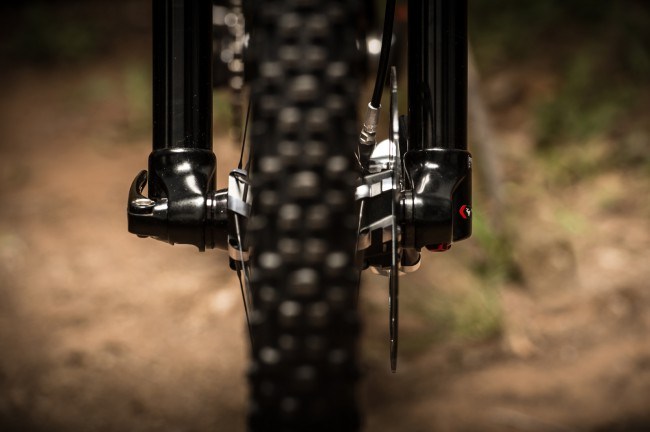 And below the stanchions we see an all new axle interface.

SRAM’s solution to the stiffness issue goes by the name Torque Tube. Rather than calling it a new axle standard – though it is still that – RockShox refers to it as a new hub-fork interface. The way the RS-1’s axle mates with the inverted fork legs is unlike anything currently on the market, and is necessary in creating adequate stiffness. 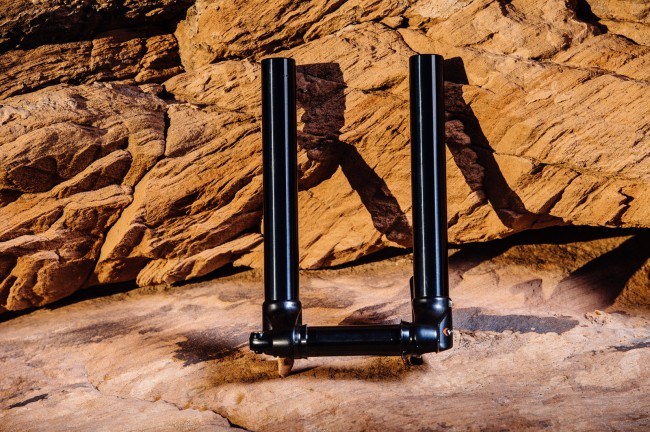 The torque tube, seen here removed from the hub, is 27mm in diameter, which allows a much larger contact area than standard hubs.

The problem with existing axle interfaces – including 20mm axles with clamping dropouts – is there is nothing to prevent twisting forces on the bearing side caps. SRAM’s Torque Tube is a solid piece that clamps between the two dropouts, effectively creating a single unit that holds the hub and provides a mounting location for the stanchions. It uses the same Maxle Ultimate skewer as a Pike. 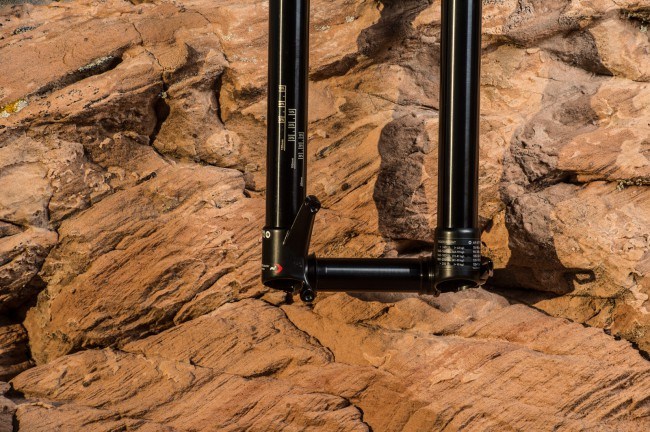 From the back side, we see the post mount which is good for up to 200mm rotors.

The Torque Tube itself is 27mm in diameter, which results in mating surfaces between hub and fork which are very large. The over-locknut dimension is a familiar sounding 110mm (the same as 20mm axles) which helps keep the 29″ wheel stiffer. When you’ve decided to redesign the axle interface, why stick with anything in an existing XC standard? 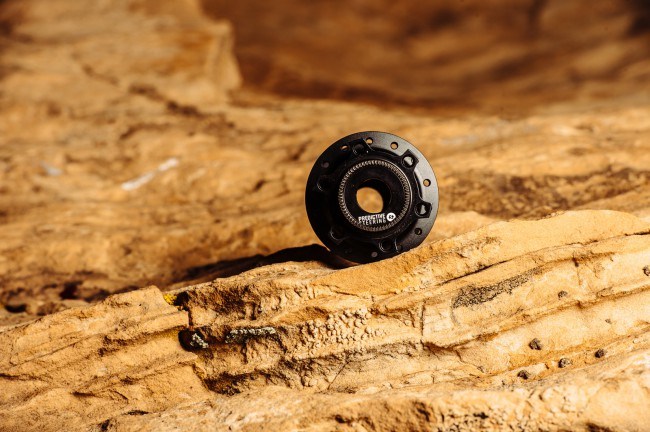 SRAM’s hub technology is called Predictive Steering. Three options will be available from SRAM with DT Swiss producing some hubs in the future.

Unlike the XD driver design which SRAM licenses to over 60 manufacturers, the tolerances for hub manufacturing have them very cautious about this one at the moment. The hub design is only to be produced by SRAM at this point, and in the future by DT Swiss. 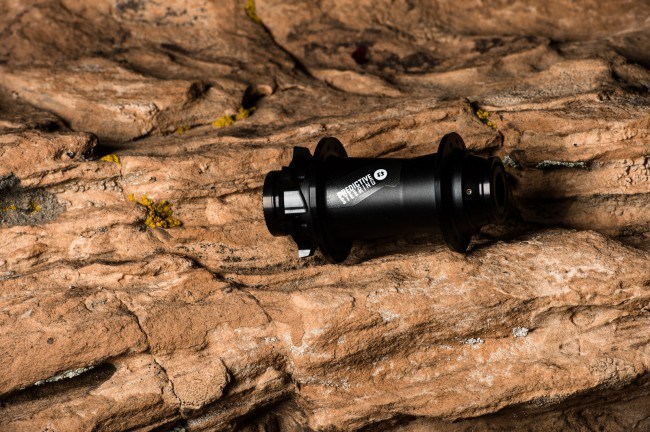 This is SRAM’s aftermarket hub, available in 28 or 32 hole drilling with regular j-bend spokes flanges.

I had the chance to ride the RS-1 in Moab at SRAM’s Trail House. I asked to try the 120mm version as that’s the longest one available and I figured that would give me the best indication of the fork’s stiffness. The bike was a 120mm Trek Fuel EX with carbon SRAM Roam 60 wheels and a Hans Dampf up front – not exactly an XC setup, but conveniently more like what we’d run here in BC. 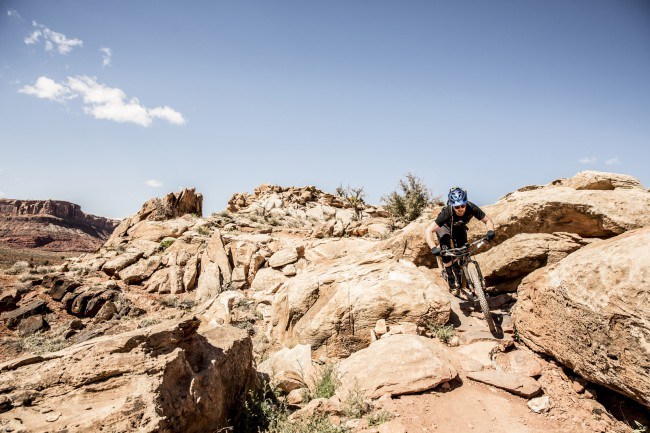 Our ride wasn’t all that steep, but opportunities to test stiffness through heavy braking were aplenty.

I could tell pretty quickly that the weight in the RS-1 sits lower than in a traditional fork. Even with a relatively heavy tire, the steering was snappy. The upper of the fork slides smoothly on the internals and the aforementioned fore-aft stiffness was definitely not just a marketing claim. The initial settings provided by the chart on the back of the fork leg made the spring far too stiff for my liking and I wasn’t pushing the RS-1 through its range properly. 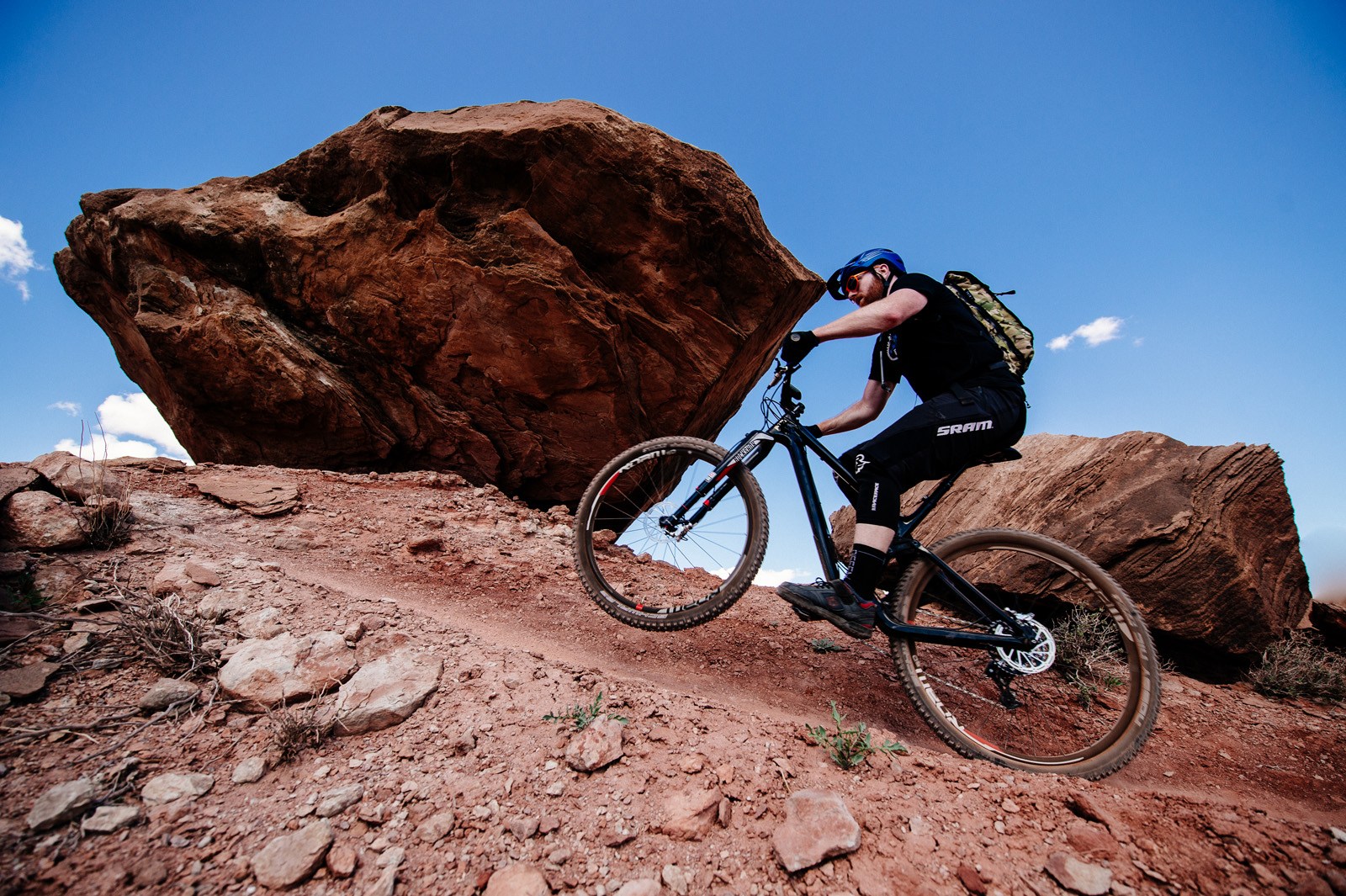 Is this the definition of “not pushing the RS-1 through its range properly”?

Once I had the pressure dialed in, I was able to feel the Accelerator damper working as it should. RockShox succeeded in creating a “little Pike” in that initial small bump control is offset by good mid-stroke control. Unsurprisingly, the RS-1 does provide a firm ride that is expected in short travel forks.

I am inclined to criticize RockShox for not putting any sort of external compression damping adjustment on the RS-1, but the combination of bottomless tokens and rebound damping adjustment should allow the rider to find settings they jive with. We may just be spoiled by a lot of adjustments these days, and if the stock tune is good, then it may not matter. I didn’t spend quite enough time on the fork to make that call. 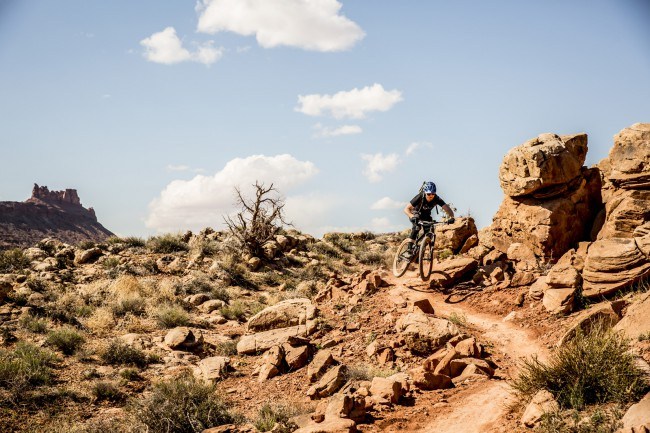 Can’t help it. Bikes are fun.

As an XC race fork RS-1 is a huge departure from the norm, and with the big carbon upper you can bet there will be early adopters that just want to give it a go for the way it looks. The new axle interface is going to raise some ire, but the RS-1 is a feat of engineering that provides a new kind of riding experience. As the RS-1 filters into the OEM for the 2015 model year, we’ll begin to see how it fits in to the future of short travel 29ers. The fork will run for $1865 USD. 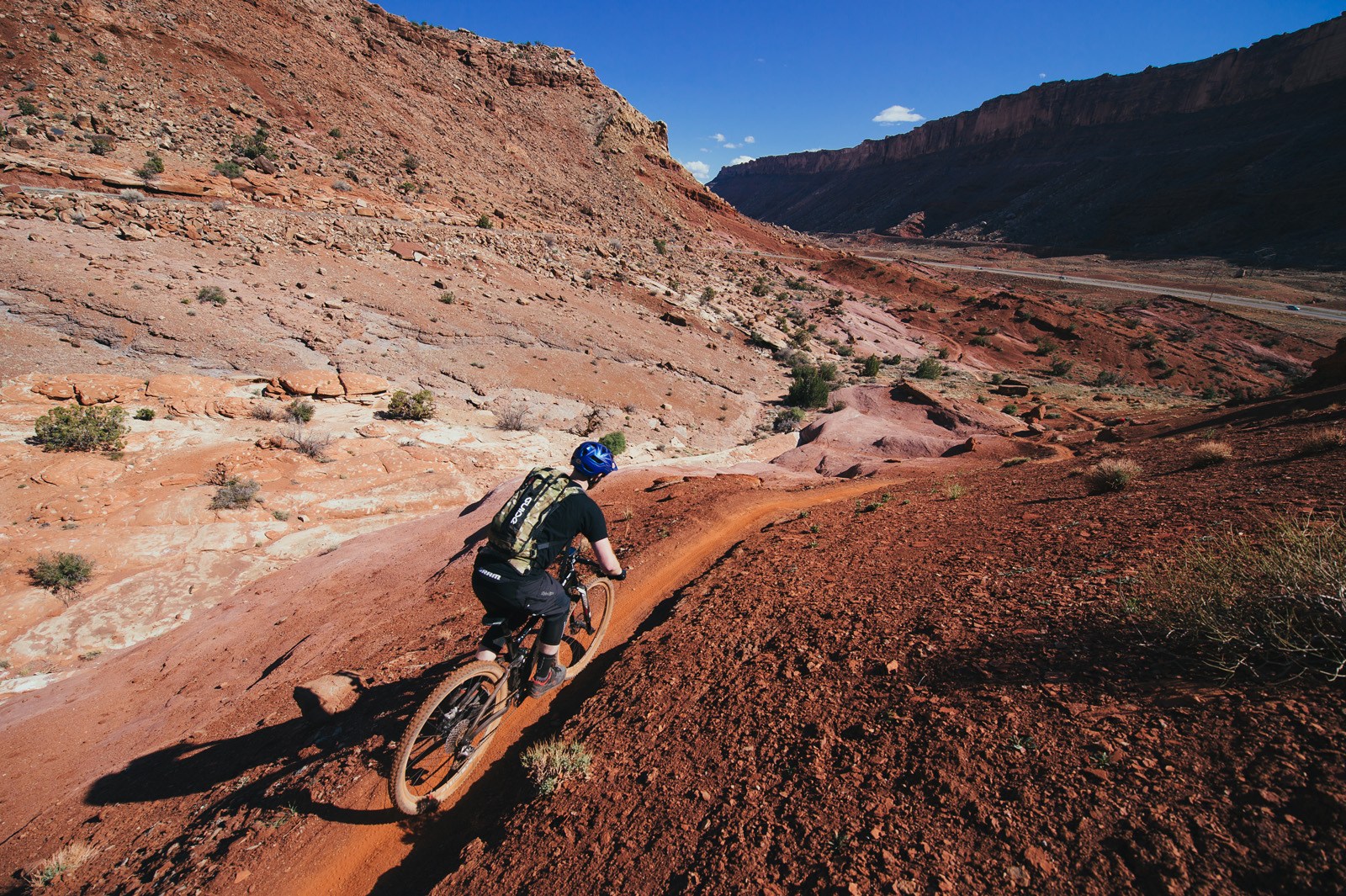 The cruise back to Moab provided plenty of twists and turns on singletrack.

Are you ready to turn your XC bike upside-down?

Very cool. I think it's awesome that they're using new technology to try and solve old problems. This is the kind of experimentation that yields advances that trickle down to everything else. Can't wait to see if this leads to more AM-type stuff.