When I heard a new RockShox Lyrik was coming in 2015 I was certain it would be a Pike on steroids. Meaty 36mm, 37mm, or maybe even 40mm stanchions? Huge chassis. Maybe even a lightweight 180mm dual crown option? Initially I was very surprised to see the subtly more aggressive looking 1/3 pound heavier fork.

The fact is SRAM packed notable additional performance into the Lyrik for around 150 grams over an equivalent Pike. Chassis stiffness is improved* and the air spring progression is more subtly tunable. 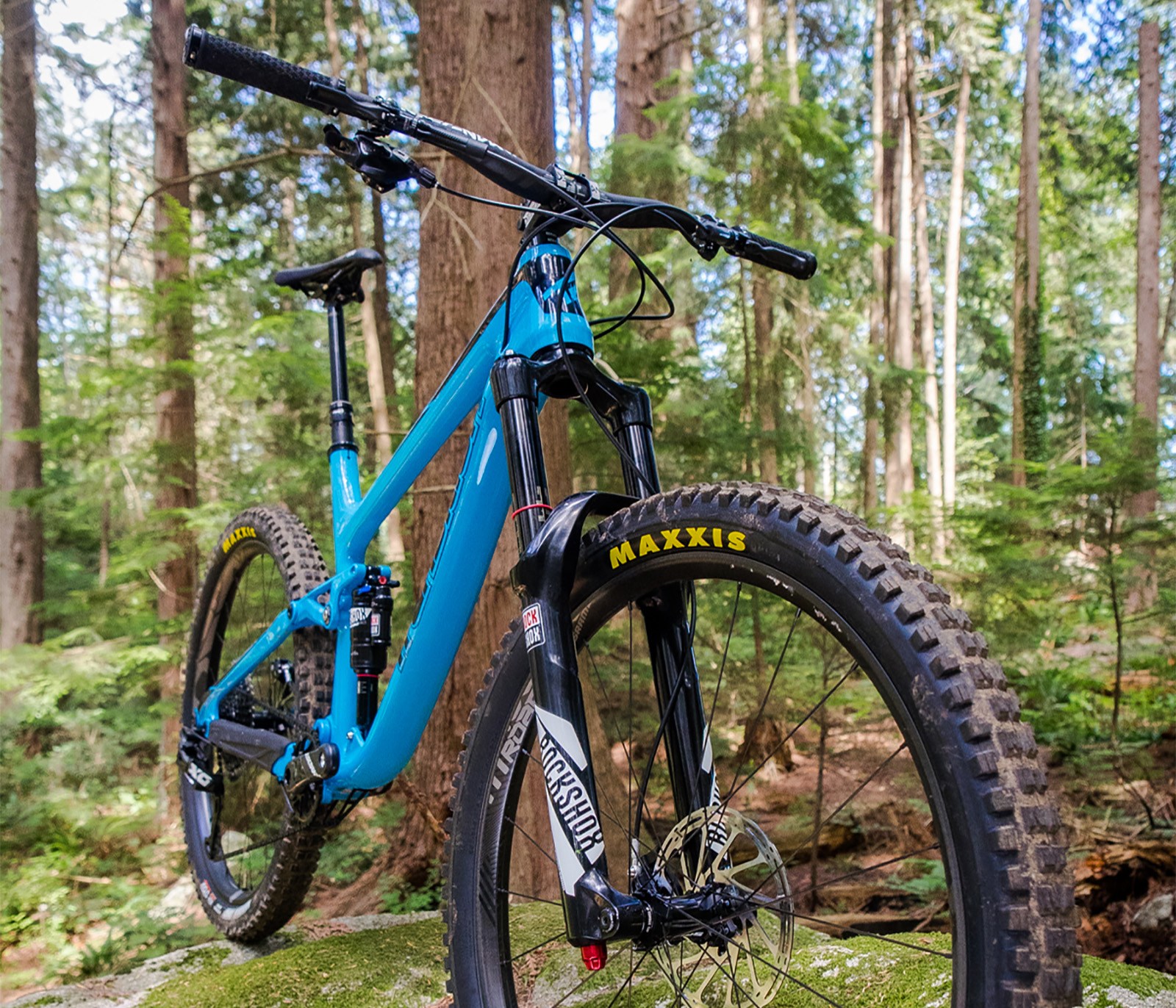 There is a fresh 2017 RockShox Lyrik up front on the SRAM Eagle equipped Transition Patrol Carbon tester. Photo : Dave Smith

SRAM provides excellent online service manuals for most of their products including the Pike and Lyrik. To be clear, these are not tutorials. If you need some guidance, skilled mechanics are often keen to pick up hours in the off-season showing riders the ropes. Ask around but please be prepared to pay a fair rate.

There’s a fresh 2017 RockShox Lyrik on the SRAM Eagle-equipped Transition Patrol Carbon tester and some bench time is a great excuse to have beers with friends on a weeknight. Enter Jeff of Bikeroom stage right. 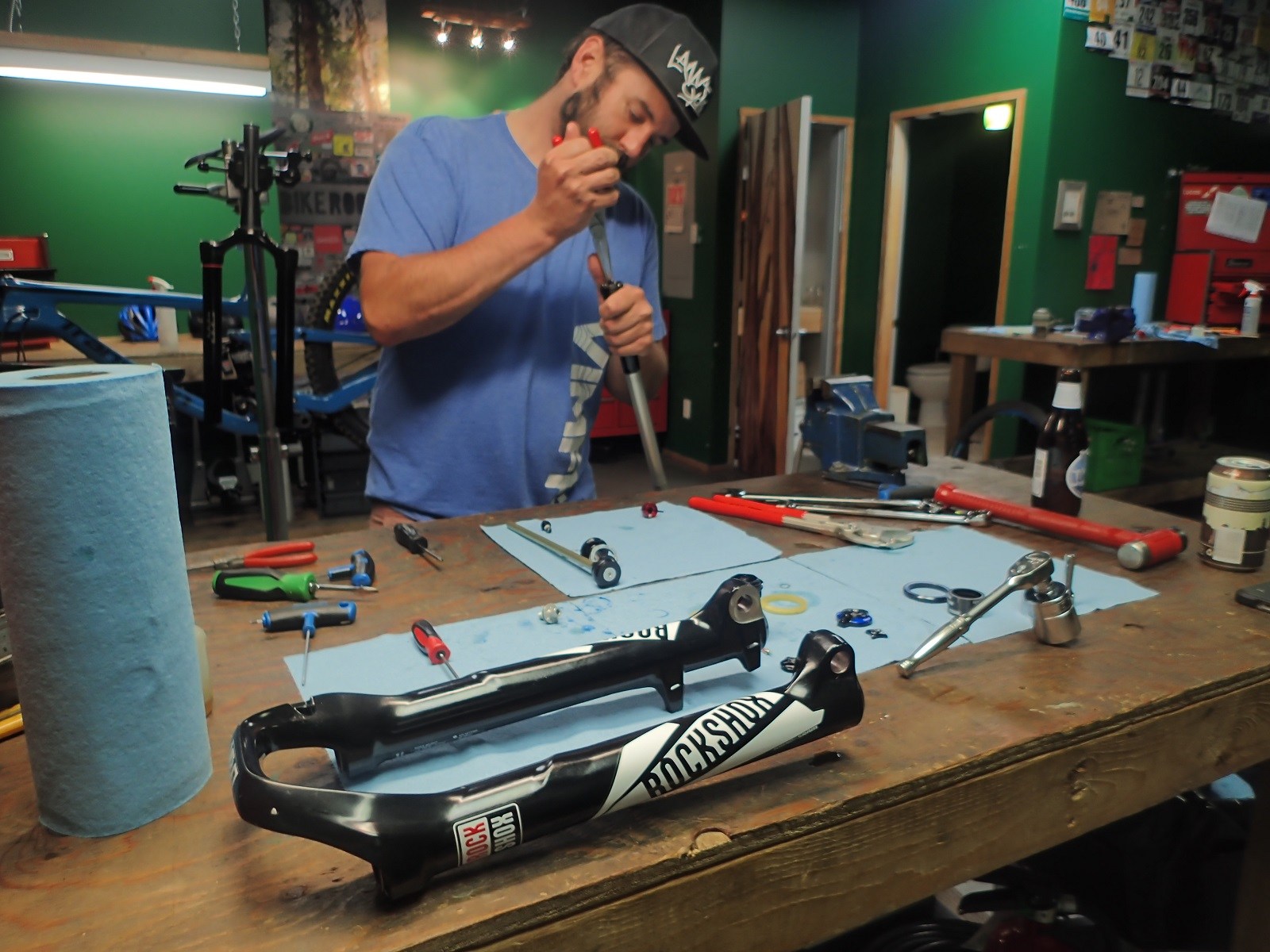 Sculpted to get the maximum stiffness and durability out of the available materials. I’m of course talking about the Lyrik lowers. As always, a big thanks to Jeff at Bikeroom for his knowledge and time.

As with most fixed position air forks, air pressure is added through a single Schrader valve. Where most other air forks used a coil negative spring to help the system initialize, RockShox brought the self-balancing negative air spring to the mainstream. Thanks to a dimple in the stanchion, air pressure is transferred from the positive to the negative air chamber. 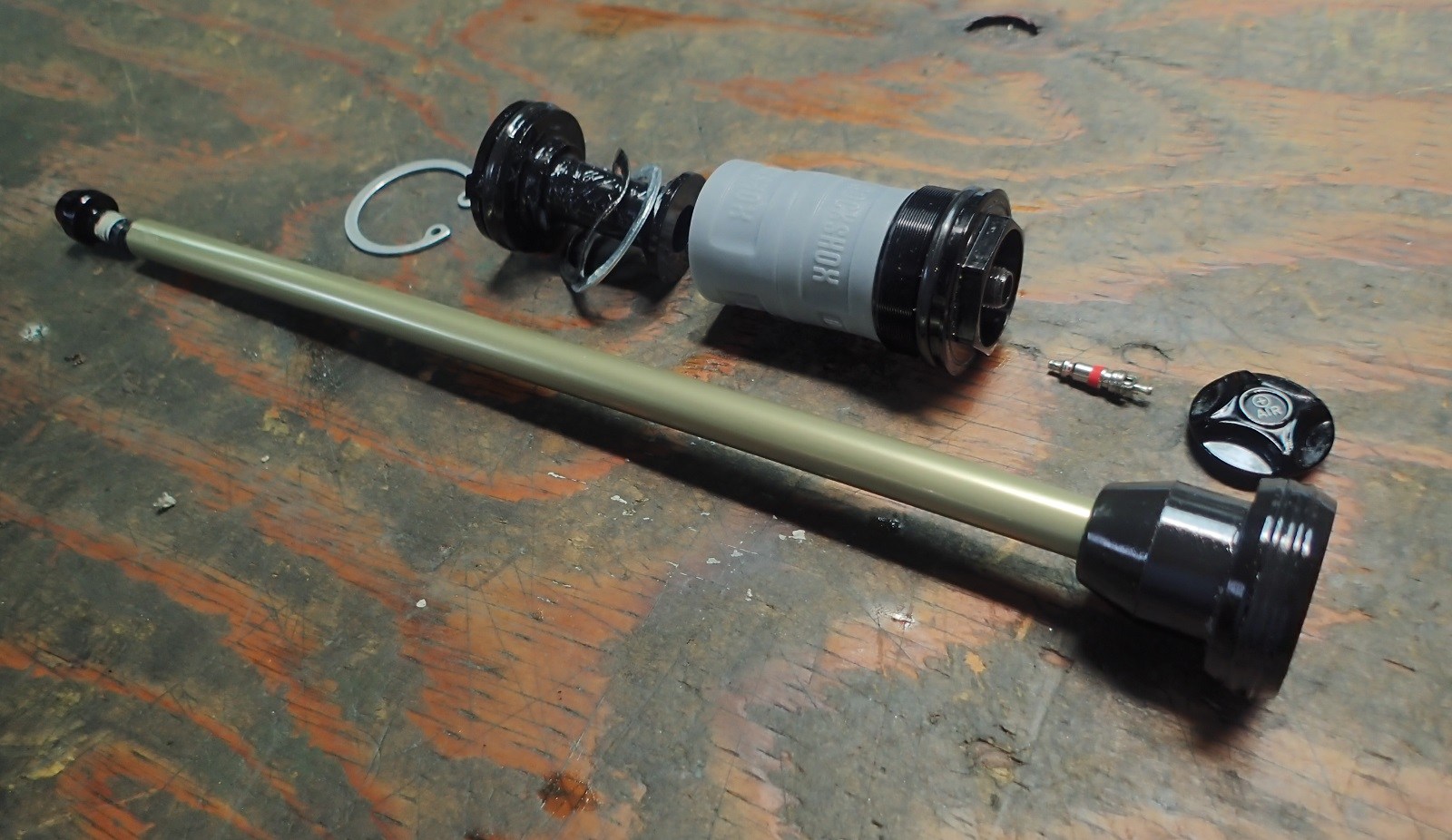 The Lyrik’s solo air system is as simple as it looks. The air piston is both lower friction and better sealed than previous Solo Air forks. The volume of the Lyrik is more subtly tunable than the Pike without modifying tokens.

My favourite feature of the Lyrik, compared to the Pike, is the increased tunability of the air system. The change in progressiveness per volume token is much more subtle. Depending on the bike, I find myself going back and forth between two and three tokens in the Pike – or modifying a token to achieve 2.5. Whereas for my riding the Lyrik is perfect with three.

Since the Charger damper performs best with a lighter low-speed compression setting and fairly fast rebound, being able to dial in the progressiveness of the air system is paramount. 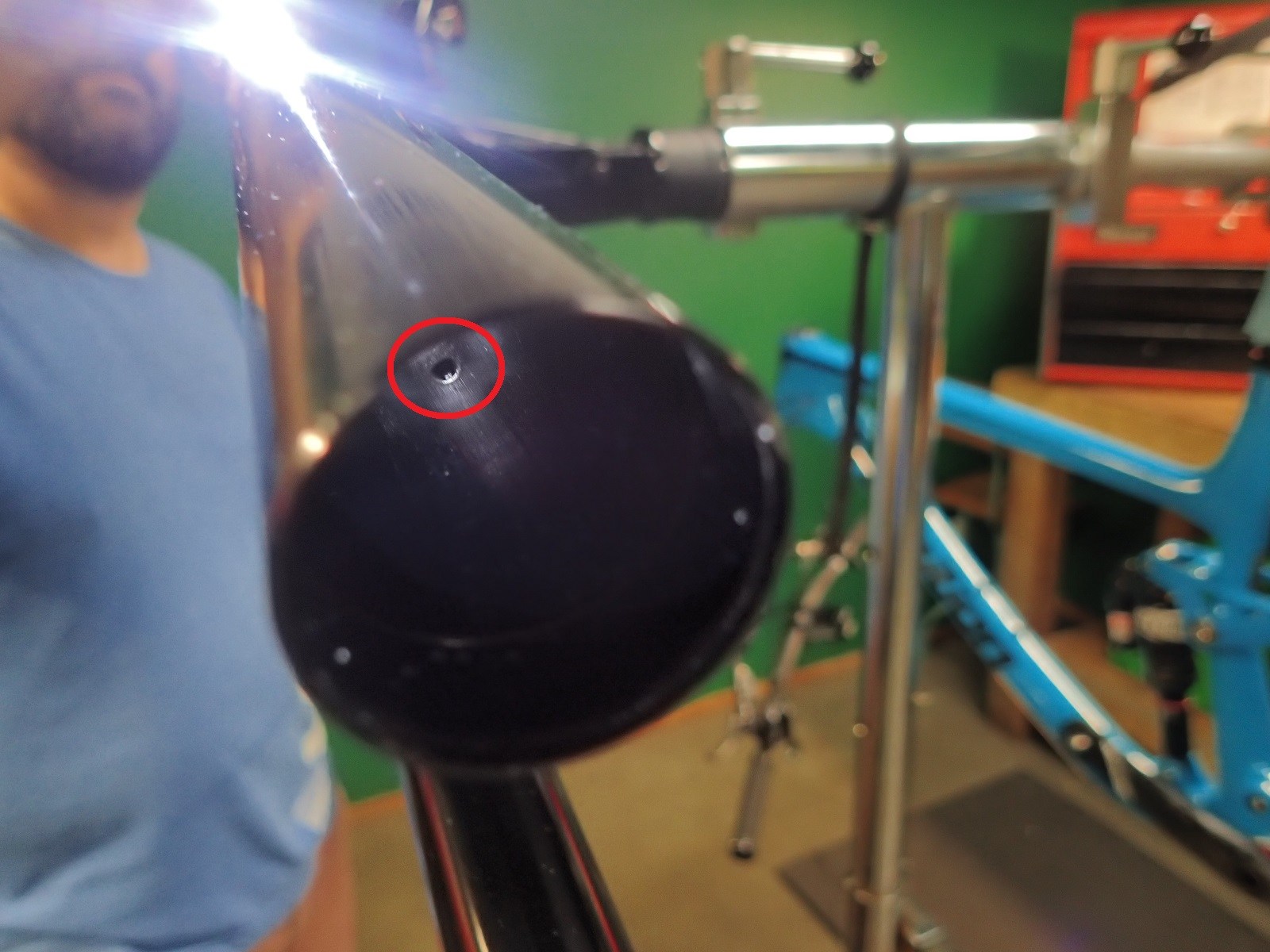 The magic dimple. Travel adjusting self-balancing air forks are more complicated than negative air springs forks because the dimple must be kept in the same position relative to the positive air system.

The one complaint I hear about self-balancing air forks is the comparative expense of travel adjustment. Air systems with coil negative springs use cheap plastic spacers to infinitely reduce travel. Because the location of the dimple relative to the air system must remain constant on self-balancing air forks, the only way to adjust travel is by replacing the air piston rod.

RockShox sells the air piston rods separately in a variety of lengths. Any home mechanic that is comfortable swapping air tokens and replacing fork seals should have no problem swapping the necessary part to change for travel. 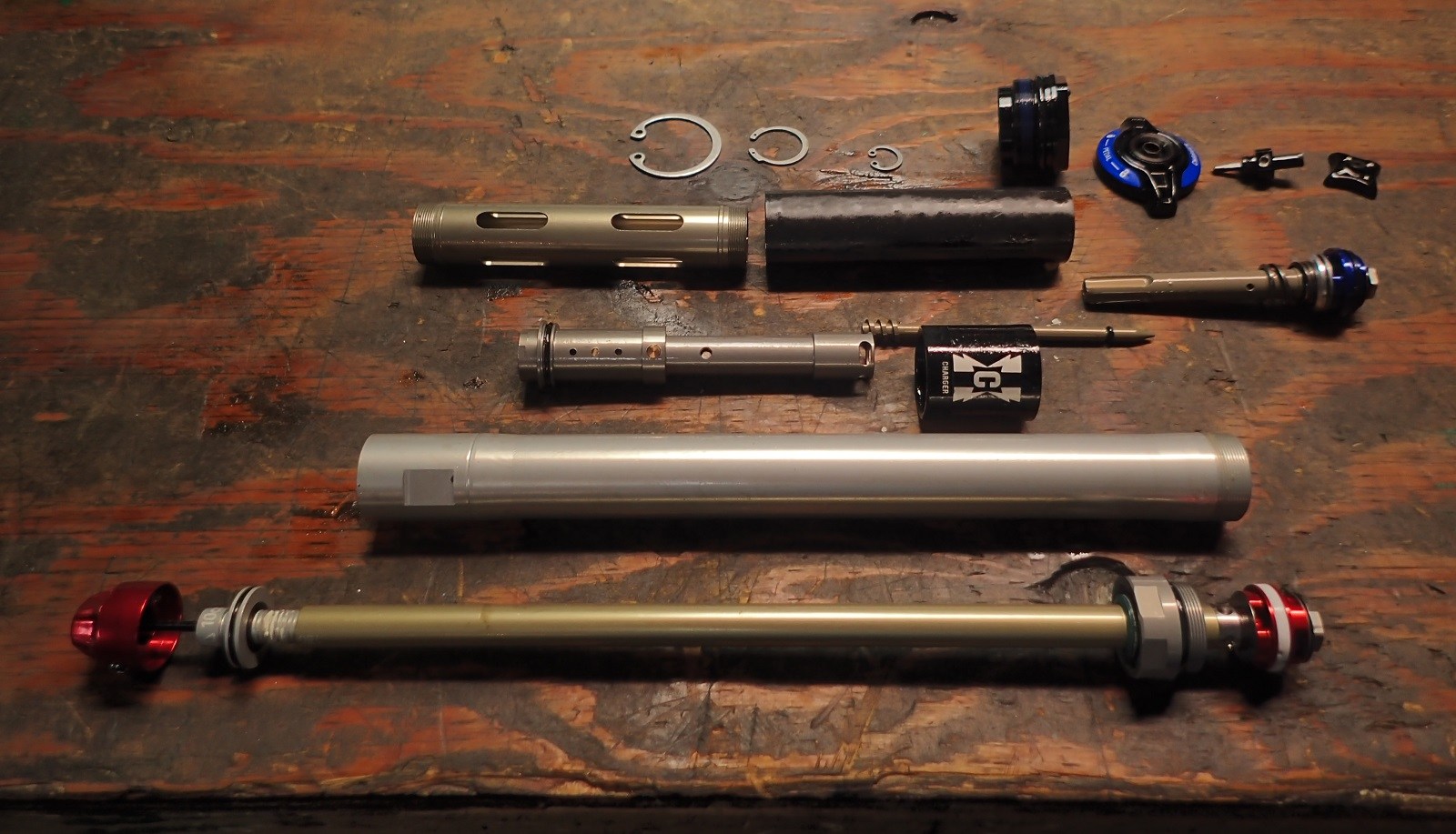 The Charger damper in all its naked glory. The compression circuits on top. Rebound circuit on the bottom. I’m thankful that most suspension companies have adopted the standard of red knobs for rebound and blue for compression.

You don’t have to go back many years to appreciate how far, and how fast, SRAM manufacturing quality has improved. The quality of the machined and anodized aluminum components of the Charger damper in this RockShox Lyrik speak for themselves. 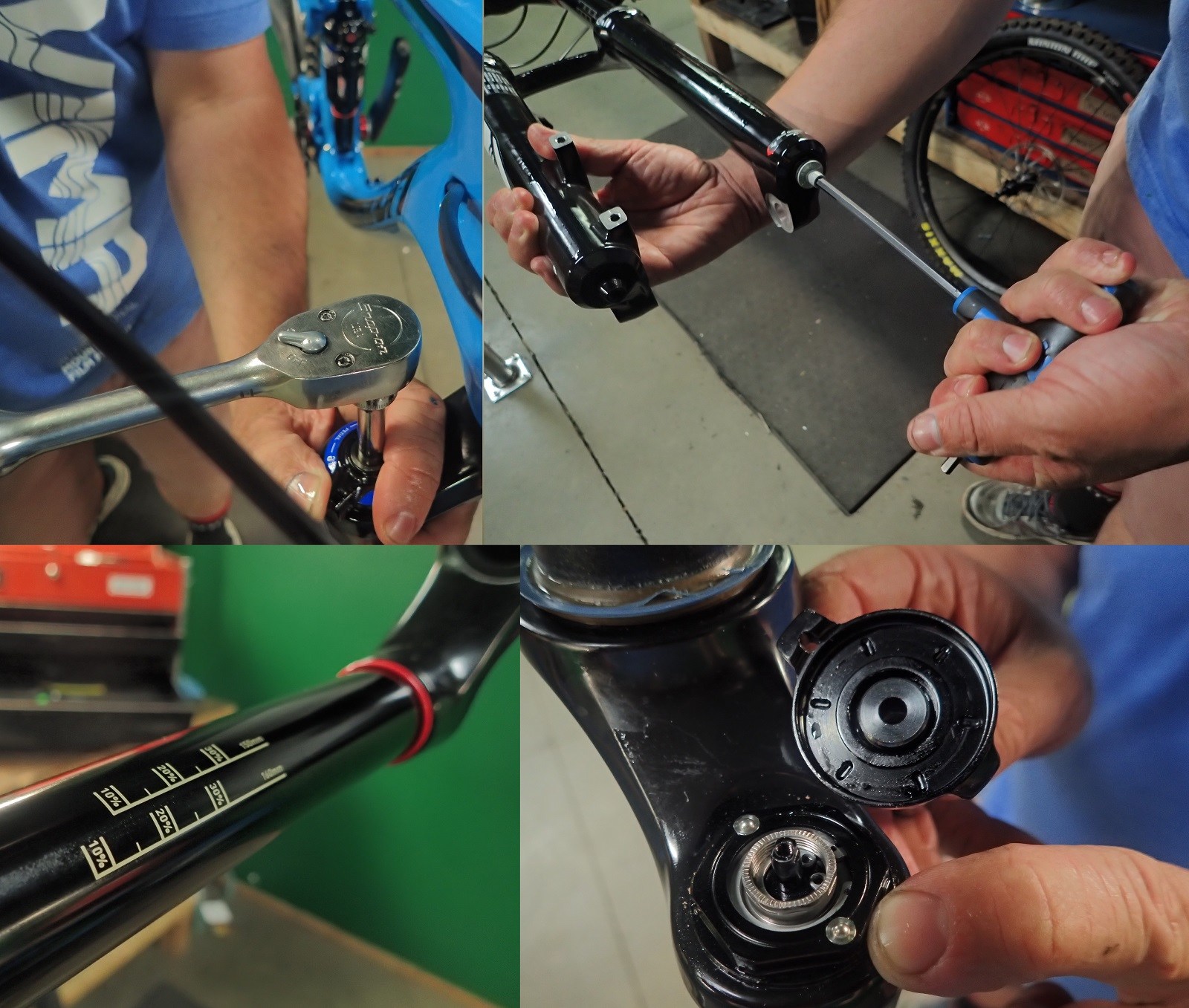 Tools of the trade. Fresh hex keys are essential when dealing with alloy bolts. RockShox sag indicator for both 150mm and 160mm travel. 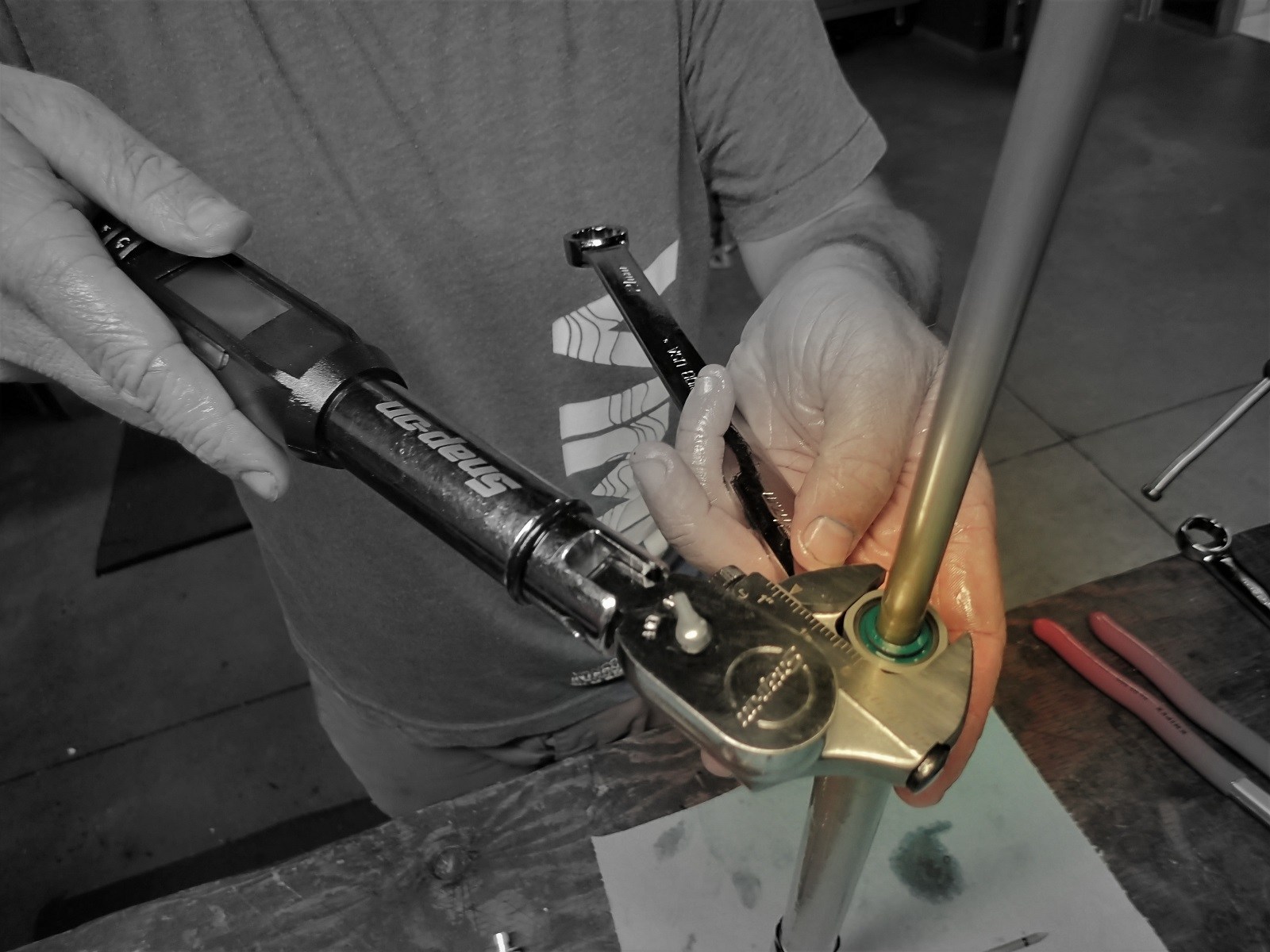 RockShox has reduced damper friction significantly with an updated seal head from SKF.  It’s a relatively cheap and easy upgrade that I’d recommend with a complete fork service if you have a pre SKF Pike or Lyrik.

The RockShox Lyrik RCT3 Charger damper is completely serviceable. Every small part is replaceable and more importantly available. Here in Canada RockShox has support from distributors LTP and Cycles Lambert, and small parts are available through a vast array of independent dealers. Shawn Cruickshanks and his team at Fluid Function are also an excellent resource for parts and, of course, service.

RockShox publishes all their oil volumes but Jeff still recommends taking a measurement of what’s coming out for comparison sake. Knipex pliers always seem to show up. Compression and Rebound valving is spring backed. No plastic here: all machined aluminum parts.

The Charger damper uses a comparatively firm rubber bladder. The damper is a closed system and the bladder expands under compression to accommodate more fluid volume.

It’s best practice to house the bladder at the top of the fork to avoid issues with lubrication bath oil bypassing the lowers, which is why most bladder style dampers now share the same orientation.

The firm rubber bladder slides over an aluminum skeleton. It expands and retracts to handle changes in oil volume as the damper compresses. 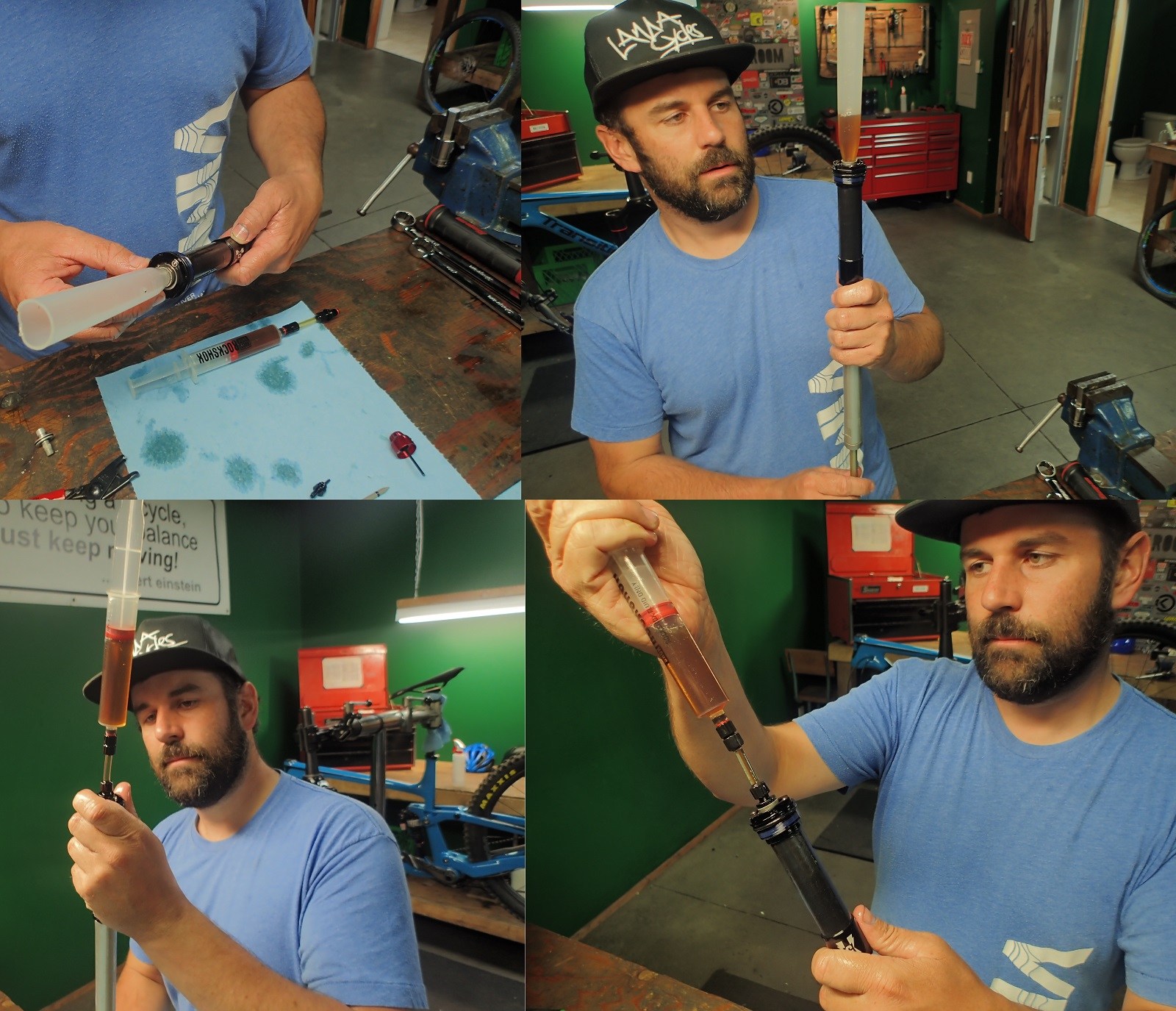 Like many bike repairs, there’s a right way to bleed a Charger damper and other ways that work. If you don’t have access to a proper syringe bleeding tool there is always gravity and patience.

Grease the air system, soak the foam rings that sit under the main seals in oil and then rub them and the seals down with Slickoleum. This RockShox Lyrik was very well assembled, so in this case Jeff is making sure it feels as good as it did out of the box.

Jeff measures out the recommended bath oil for both sides of the lowers. He pours some in from the top, slides the lowers on, and then shoots the remainder in from the bottom. 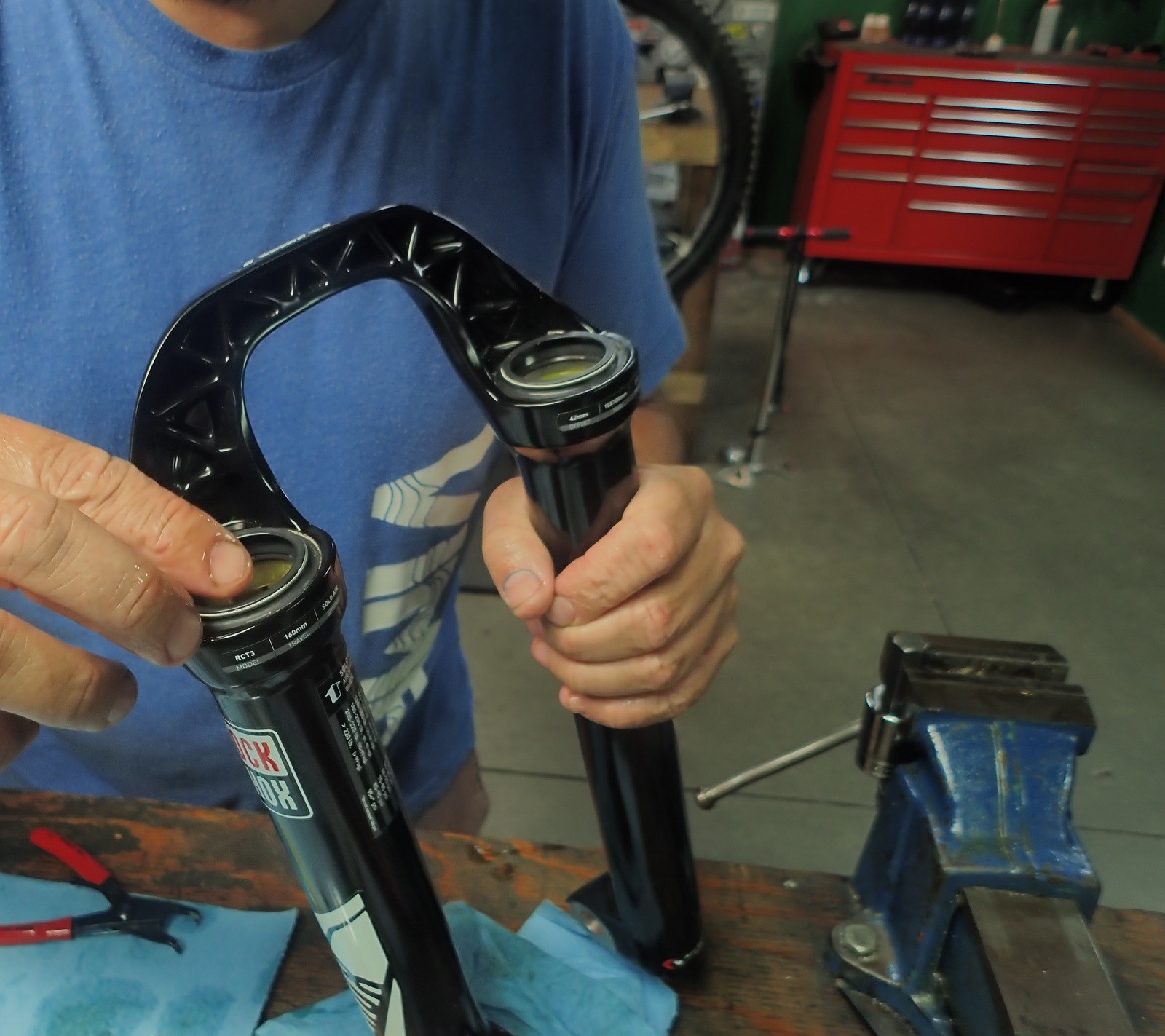 Jeff soaks the foam rings in oil while the rest of the teardown is going on. After tucking them in below the main seals everything gets a nice Slickoleum massage. 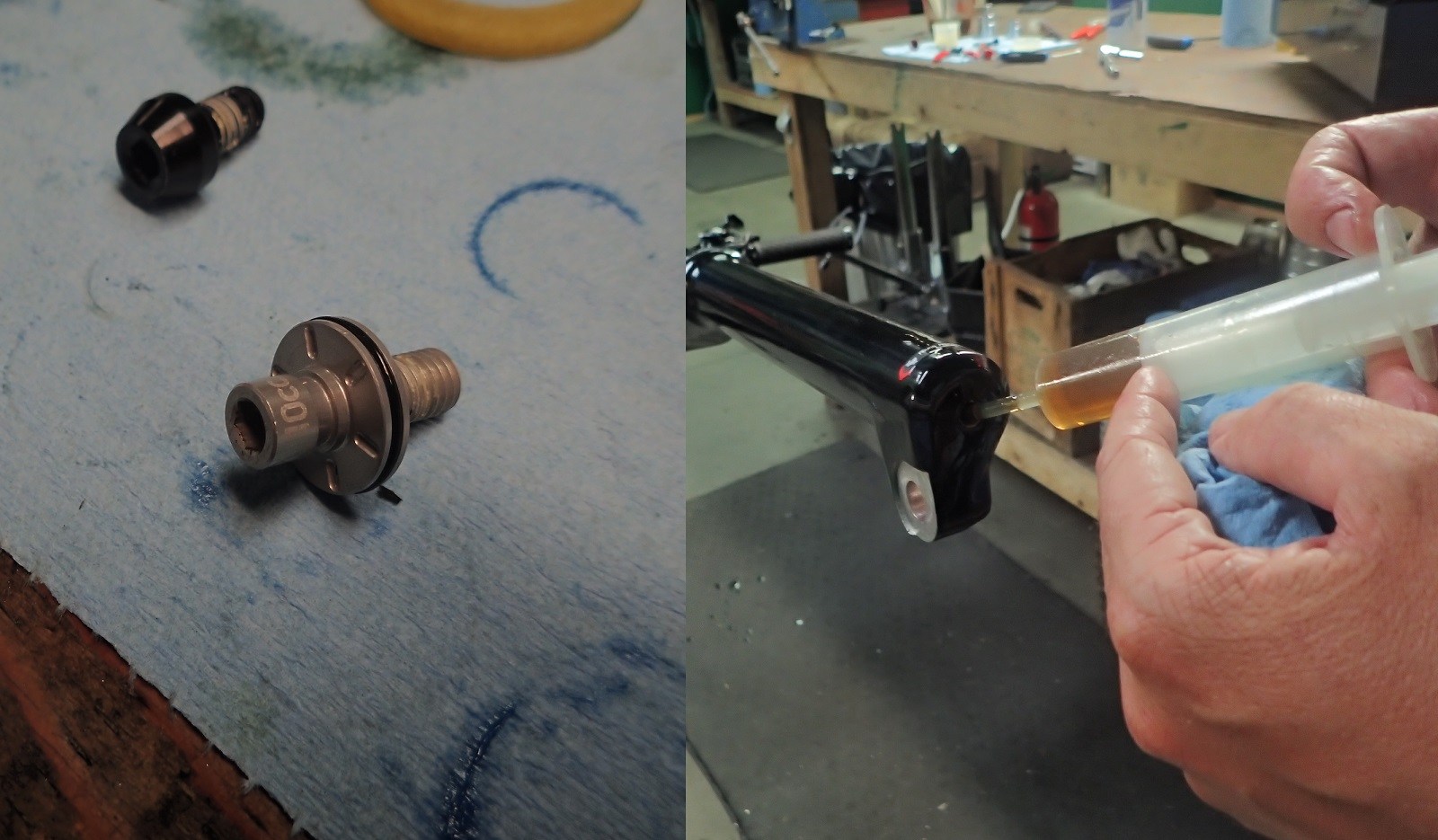 SRAM conveniently etches the damper side oil volume right onto the foot nut. How awesome would it be to have the various recommended oil heights and weights printed right on the lowers?

With the teardown complete I had one more ride on the Lyrik and Eagle equipped Transition before Timmigrant came and spirited it away. He’s in the process of giving it a thorough winter whooping and will be reporting back on the fork’s performance.

Do you need more than the Pike can provide?

yes, good advise. I've worked with too many mechanics who have developed contact dermatitis from repeated exposure to oil, greases and detergents. Steroid creams for life, is unpleasant.

Nice write-up. Did you take a peak at the shim stacks while in there? I'm wondering if the compression stack is a little more gravity oriented than the preloaded, digressive stack in the Pike chargers.

Thanks; we went as indepth as you see in the photos. I have only light hours on the Lyrik so I'll leave definitive comment to Tim's coming review; however, I would say the fork damper performance is very similar to the Pike and Boxxer where, compared to a Fox or X-Fusion fork for example, the compression prefers to be run quite light and the rebound quite fast.

Definitely I would say an aggressive rider is relying more on air volume and rebound speed to dial in the forks ride height. I don't mean that as a criticism, I really like the Lyrik, just trying to highlight the difference.

Jeff - have you considered gloves for suspension work? Maybe you're using WPL or some other bio fork oil - those petroleum based fork oils and greases are skin cancer in a bottle…