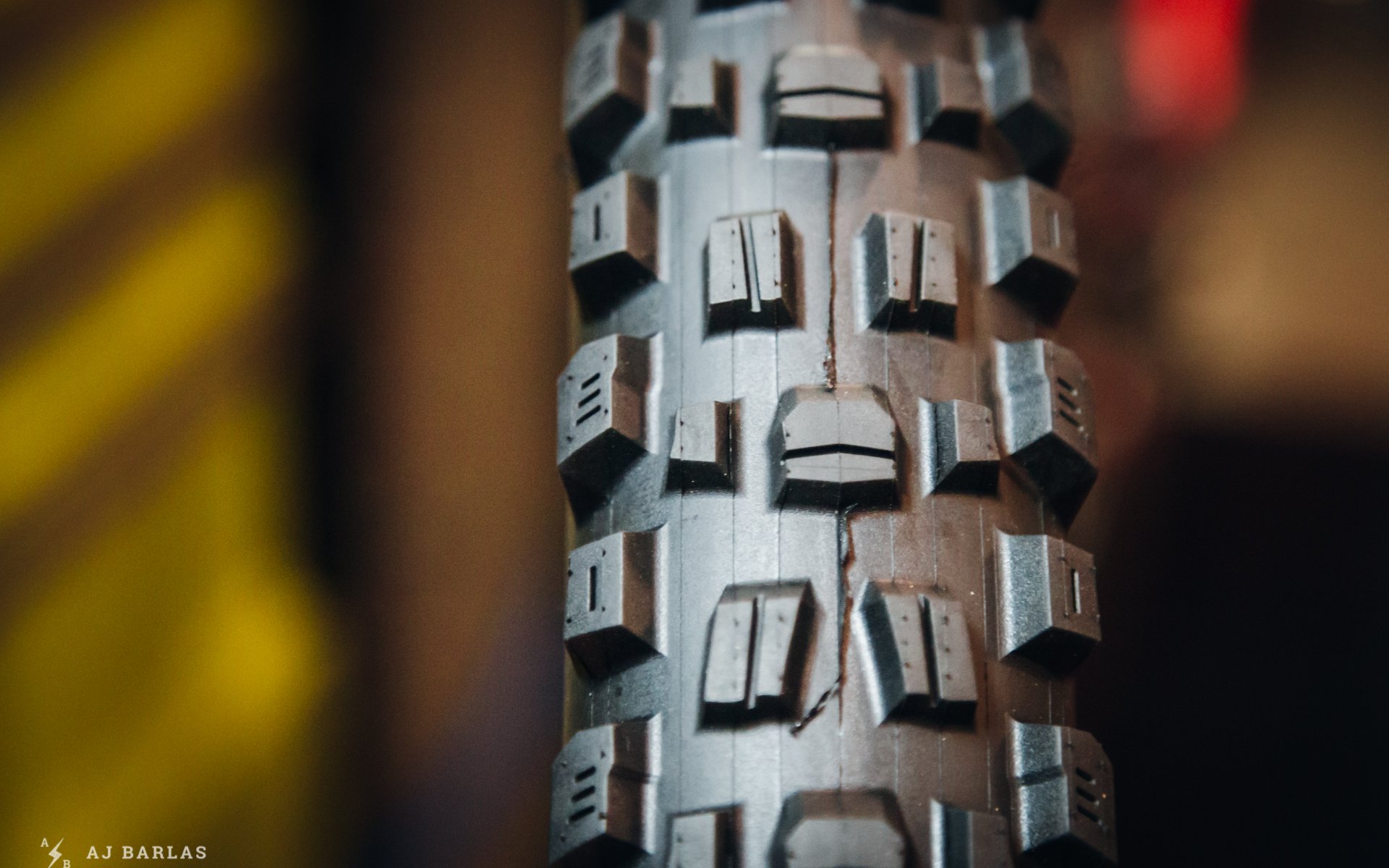 Maxxis released Greg Minnaar's signature tire, the Assegai – which is pronounced Ass-e-guy – during Sea Otter and it piqued interest from riders all over. Last week Maxxis hosted me and a bunch of other media squids in Santa Cruz to get some ride time on the tire and to chat about it with Greg Minnaar and Maxxis staff. The tires were fit mostly to Santa Cruz Hightower LTs and I spent two days hammering around a variety of local trails, and some hidden gems on them.

Initial riding impressions, for the most part, were very good but I had some questions for Greg and the team at Maxxis. When I asked Greg why a custom tire now, with a chuckle he said that it took this long to convince Maxxis to do a tire with him. Maxxis noted that it’s tricky working on signature tires with sponsor changes being a real possibility and I definitely don’t argue that point. But at the final EWS in Finale Ligure two years ago, Greg was able to convince Maxxis and he remembers diving straight into sketching designs in his hotel room. 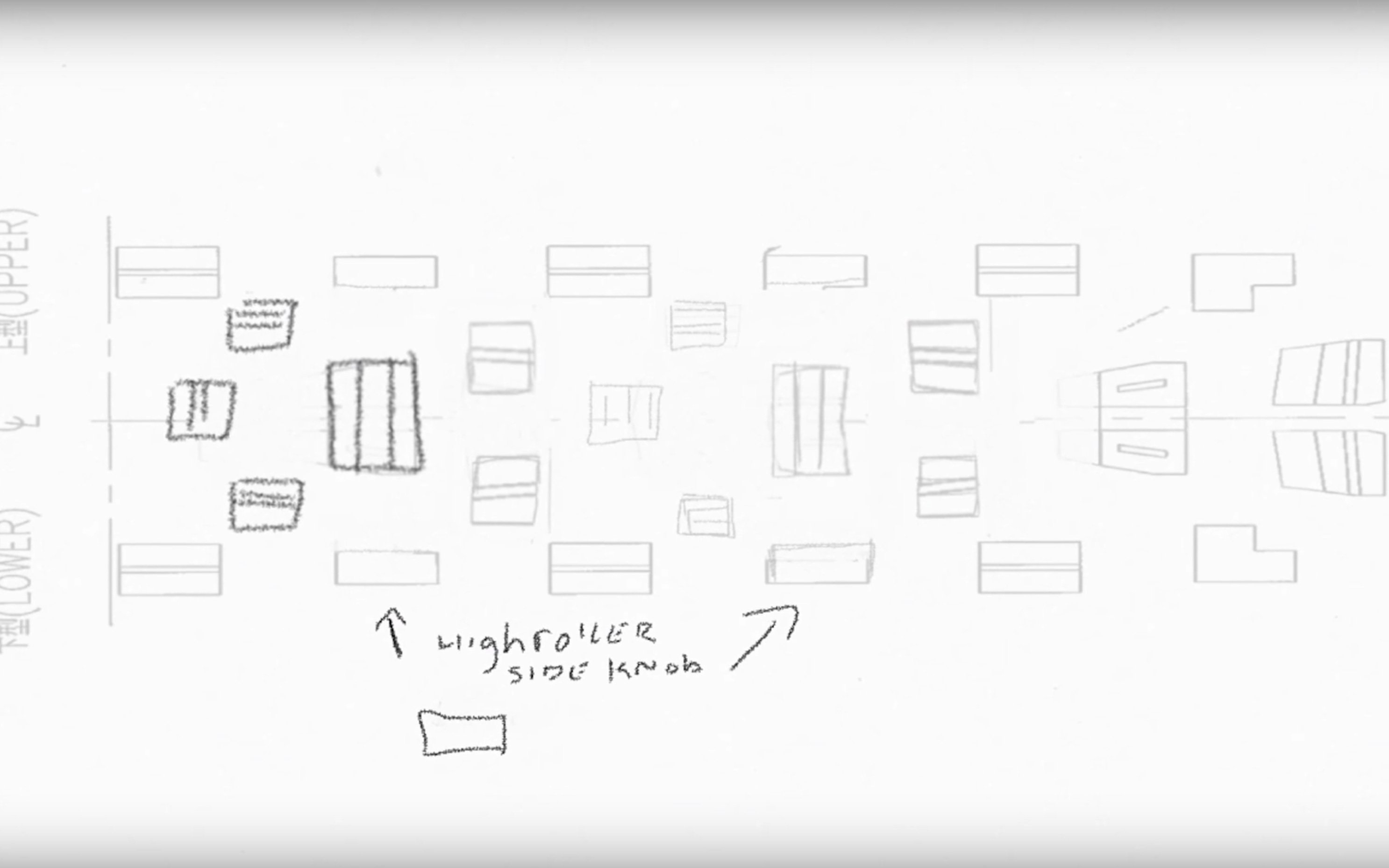 One of Greg's early sketches of the Assegai, clearly showing the influences. 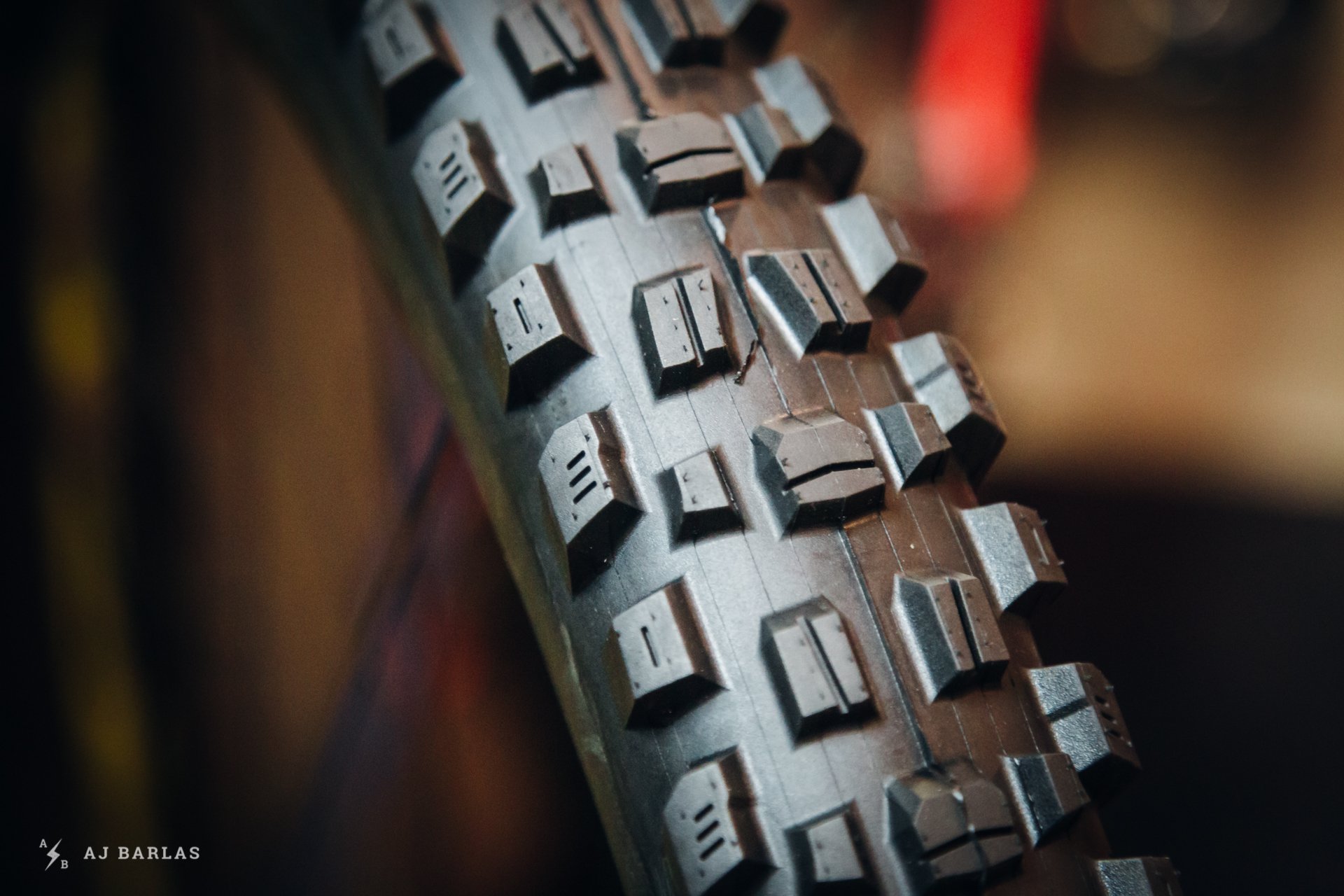 The Assegai is currently only available in a DH casing but when asking Maxxis, they said we could see an EXO version later in the year and possibly a DD even earlier.

The inspiration for those sketches came from a number of his favourite tires; the Minion DHF and DHR II, and the original High Roller with a splash of Shorty to spice it up. Greg left the science to the engineers at Maxxis, relying instead on his years of racing experience. In fact, once Greg had sketches that he and Maxxis were happy with, he let the engineers work their magic, humbly noting that's their world and they know it best. As a result, the profile design of the lugs, especially the new intermediate ones, was left to the engineers at Maxxis. The side lugs of the original High Roller are among Greg’s favourites and a slightly updated version of them appears on the new tire.

With the lugs being a little taller than those found on Minions and the Highroller, there were amends needed. In order to bring the side lugs up to the height needed for the desired tire profile while also being able to hold adequate shape when loaded, more support was added and the angles were altered slightly. Greg wanted to add an intermediate lug to help balance the transition onto the side of the tire when cornering, removing the slight delay before feeling the hook of the side lugs. As you may have read in our initial post for the release, he wanted a tire that performed well across a broad range of riding conditions, from hardpack to loose over hard, to damp roots and rocks. 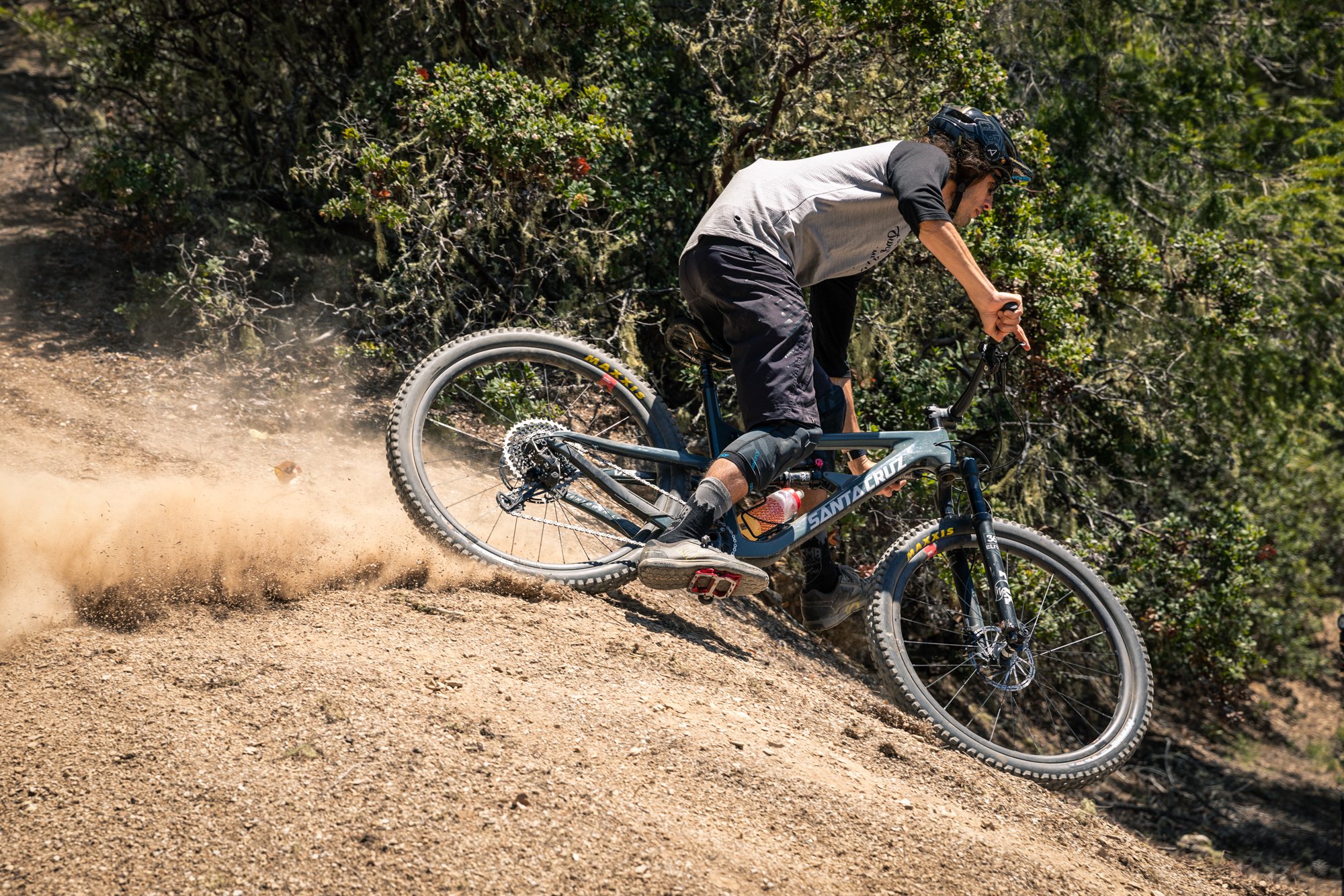 Let's start with the elephant in the room. In its current form, the Assegai is only available as a downhill tire in both 27.5 and 29-inch diameters. It’s heavy and slow thanks to all of those soft lugs and the DH carcass, making climbs less enjoyable. On flatter sections of trail more input is required to keep momentum and more effort is needed to get back up to speed when it’s lost. These attributes are all to be expected from a 1,250–1350-gram downhill tire and as a result, I’m not going to focus on them. I will say that the sooner this tire is available in a Double Down and EXO casing the better because descending performance is excellent.

I rode the Assegai in a variety of conditions, from super loose kitty-litter over hardpack, deeper soft sections of loose grit, to hardpack and fresh loam. In all conditions, it performed incredibly well, seldom becoming unsettled. Once more comfortable with the tires, it became a game of how hard it could be pushed before breaking loose. The tread design combined with the rubber compound – 3C Maxx Grip – make for a tire that is confidence inspiring. Gone is the wait for the corner lugs to engage, replaced by the tire smoothly rolling on edge as far as you feel comfortable leaning it. What’s interesting is that there is still a very positive feeling. Some tires with intermediate lugs tend to dance and skate about a little, especially in loose over hard conditions and that isn’t the case with the Assegai. 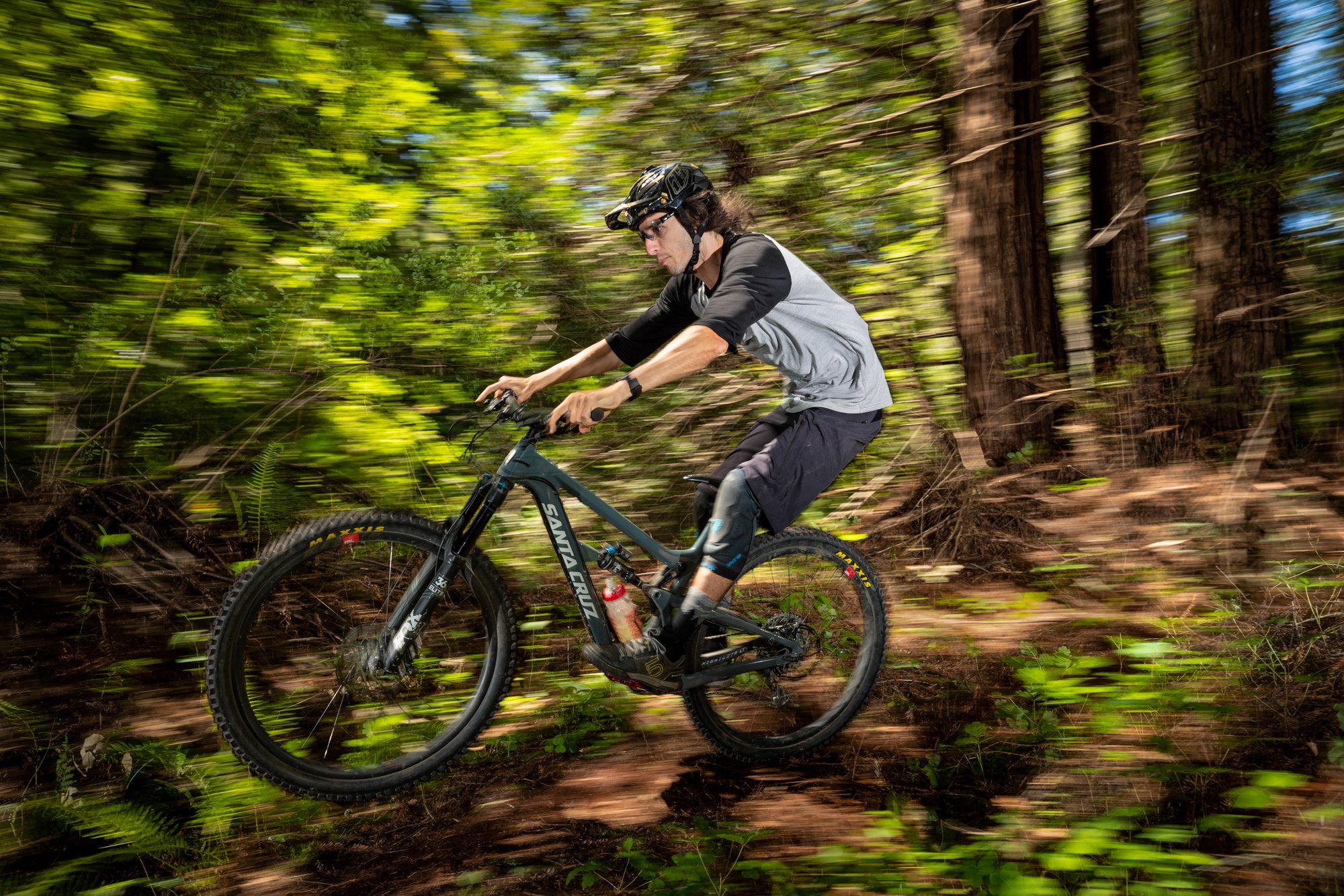 The shortest section of trail that I've had this much fun on. The Assegai hooked up well in the deep, loose dirt. Photo – Forrest Arakawa

When breaking loose, the slide was easy to control and very predictable. In events where the tire broke loose unexpectedly, usually the result of riding like a hack, the tire kept composure and was quick to regain traction. It's incredible how hard the Assegai could be pushed into corners or across off-camber sections of terrain without getting unsettled or leaving you unsure, and in challenging, loose conditions no less.

Traction and stability under braking were excellent and the tires tracked very well in this scenario regardless of the terrain and conditions that we experienced. The tall lugs and their orientation resulted in the bike pulling up quickly as well. The height of the lugs never produced any nervous squirming on firmer terrain and they provided more traction when the dirt got deep and loose, very rarely leaving me with a vague feeling. After the second day on the tire was spent shuttling, there was little sign of wear to the lugs despite some very abrasive conditions and plenty of skidding. 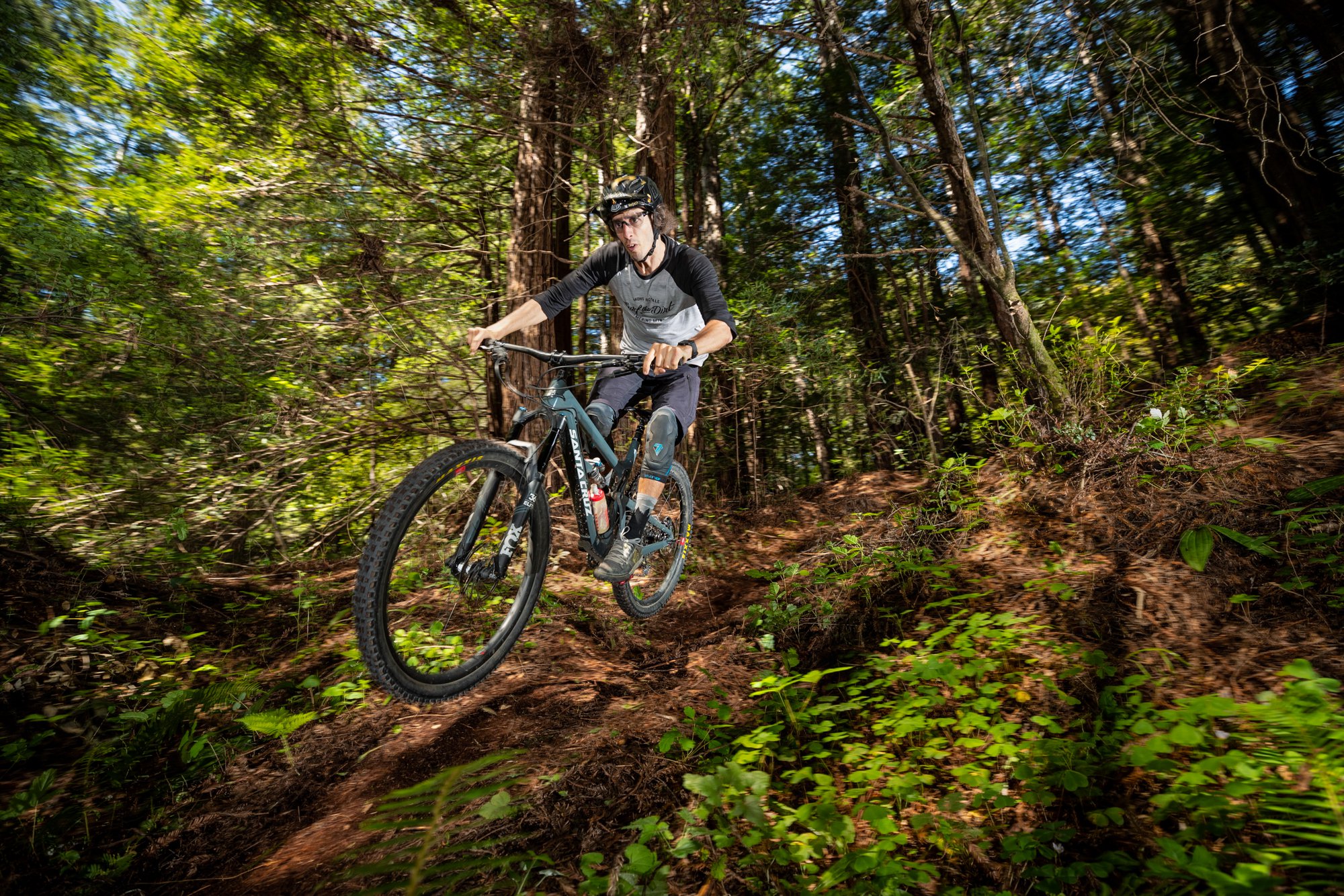 The setup for this little lift was tricky but thanks to the hold and predictability of the Assegai, pulling it off wasn't a stress. Photo – Forrest Arakawa

The downside to the taller lugs and the sheer amount of them is that rolling speed is a little slower than others, like Maxxis’ own Minion DHF. It’s a trade-off and if a faster rolling DH tire is desired then perhaps the DHR II or DHF are better choices. However, that slower rolling speed is a compromise that I’m willing to make for the control and trail manners offered by the new design, not to mention the capabilities in an equally broad array of conditions. For anyone racing against the clock, that time could be transferred to cornering speed. The availability of the Assegai in lighter casing options can’t come soon enough because it will be a great partner on any trail bike that regularly sees rough terrain, especially with variable weather conditions.

More information on the Maxxis Assegai tire on their website.

That would be an interesting combination. Let us know if you get around to trying that.

Thinking about running one of these on the front of my DH bike instead of a DHF MaxxGrip DH casing next time around... if they are actually available to buy.

That would be a good option, grambo. They were available but in limited quantities. Hit up your LBS for availability.

I could see running this up front with a DHRII rear on the DH bike.

Yeah for sure, though I'd highly recommend trying it front and rear too. It works great at both ends.

True... But I do enjoy a nice DHRII rear.

I really liked the HRII/DHRII combo on my DH bike.  HRII on the trail bike was pretty sluggish. DHRII much quicker.

The tread pattern looks sloppy wet trail approved but I feel like truth to power may have been an issue with regards to the identity work for that ass-guy(the e is silent). 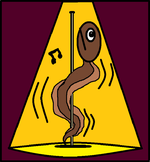 Anyone have some experience with the assegais in the wet now? I’m considering running them as my front tire on my ripmo for the upcoming fall and winter. Riding pretty steep natural trails for the most part. Some rock slabs and quite a bit of loam, roots and mud.

Looking for an update with it in the wet. What do people think? Is a DHR II or DHF a better option?

I've got some rides with it as a front tire i the wet now. For rocky, rooty, loamy trails I'm pleased with it. On one of our trails where the mud is quite sticky the Assegai did not shed the mud very well. There was quite a bit of mud left on the tire even after a 3 km gravel road ride back to the car. My buddy's Magic Mary was sheddig the mud easier. So, good tire as long as your mud is not too sticky.

Can't compare directly to the minions as I haven't had them in the MaxxGrip compound and DH casing. But at least I can say thet the grip of my Assegai (Dh casing Maxxgrip), is vastly better than the High Roller 2 (DD Maxxterra) I have as a rear tire.

Any chance you have had a chance to compare this to the TriTec Vigilante 2.5? I'm curious how the traction and feel compares between the two.

I compare a little in the Vigilante review, but I'll mention some more in the Assegai DD and EXO+ review I'm finalizing now. Stay tuned.

I've had a bit of time on both in the front now and think I prefer the Vigilante esp. in wet/loose. The Assegai (mine was EXO+/3C MaxxTerra) seems to not like being leaned over as much, but definitely brakes better and does better on hardpack. I had a few close calls on it the first day I ran it, leaning it over like I did the Vigilante and it started to drift.

The Vigilante seems better in all the other ways though (volume, wet conditions, loose conditions, off camber roots/rocks, compliance). I like the way it corners better. The tread life on the Assegai seems like it'd be higher esp on hard surfaces, my last Vigilante 2.5 lasted me ~1100 miles on the front, but it only took one day at the park for a new one to start showing subtle signs of wear (it was very dry and hard that day). I can't really tell much difference rolling, but the Assegai seemed a little bit faster, hard to tell in the front though.  I do wish I had time on a MaxxGrip version, apparently it's a bit better than the MaxxTerra version is in the wet conditions.

I haven't tried either in the rear, but coming into fall and winter, I think I'm gonna stick with the Vigilante up front. It seems to do a lot better in the wet. Looking forward to seeing if it's in my head or if your impressions are similar!