She maneuvers her machine out the door and onto the quiet street. The light of the new day just barely illuminates the pavement, their beams brightest at the top of the monstrous evergreens that suspend shadows upon the roofs and gardens of her neighbourhood. Homes literally pressed into the mountainside. The air is heavy and damp from last night’s rain, evident from the heavily dewed grass, the sheen of water against the mirrors of parked cars, and a thin mist that fogs her view of the valley.

Her body is slouched from sleep as she lifts her stiff body onto her steed, mouth peeled open with a yawn.

Despite a late night of completing work deadlines and caring for her turbulent household, she had successfully hauled body from temptatious bedsheets and into the cool morning. With gloves snugged on and chin tucked into her jacket’s collar, her foot finds the top pedal with a push and, before the comforts of the bedroom beckon her back, she settles into her turtle’s race up the mountain. 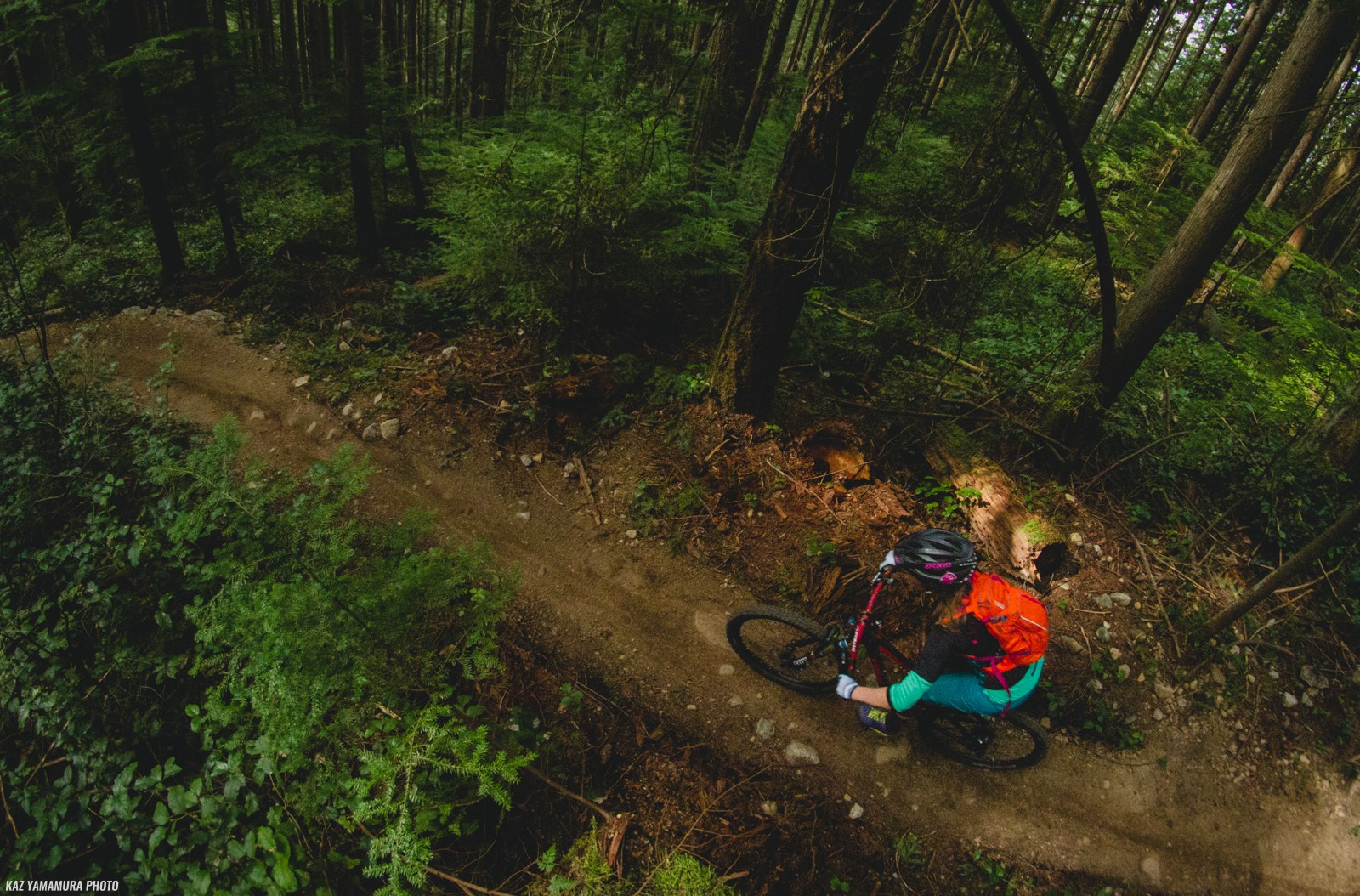 Slow and steady; she finds an even cadence. Within a matter of minutes, her heart is pumping strong as warmth seeps into her toes. The sounds are sparse and simple: Her breath, audible yet regular, the occasional chink of steel shifting as the grade of the road increases, perhaps the low rumbling of a faraway engine. The activity rouses her consciousness, and the daily stream begins to trickle in. With the monotony of the climb, she begins to think about the day ahead: the traffic she’ll be fighting in a few hours; the mountain of office work she had neglected the day before; the impossible number of across-town errands to run; returning to a home of constant hygienic dependence. They bounce upon the walls of her mind in random directions, inducing anxiety, stress, panic. As the unwanted emotions reach a point of overwhelming, she shifts her focus back to the present and lowers her head while pulling her thighs into a swifter rotation, driving her closer to the forest and farther from thoughts of the mundane.

There is sleep still stuck in her eyes, but the peace and simplicity of this place fills her fast-paced heart, makes sweet her breath, creating wakefulness and elation.

An audible exhalation of relief and exhaust as rubber rotates onto soft dirt. She eases off her pedals and hydrates, lowering the zipper of her outer shell and taking in her surroundings. The trees have swallowed all traces of man-made construction save for the beaten path sidewinding through the dark and heavy brush, still sheltered from the early morning light. Swollen shades of green and grey and midnight blue envelop her, contrasted with the vibrant and inconsistent colours of her riding gear and machine. She inhales deeply before returning to a steady pace, bringing in the moist and mossy smells of earth and pine. The oxygen is clear and crisp, filling her head with pleasantries as a smile creeps to her lips. There is sleep still stuck in her eyes, but the peace and simplicity of this place fills her fast-paced heart, makes sweet her breath, creating wakefulness and elation. The summit she seeks with passion, thoughts of the near future temporarily dashed. 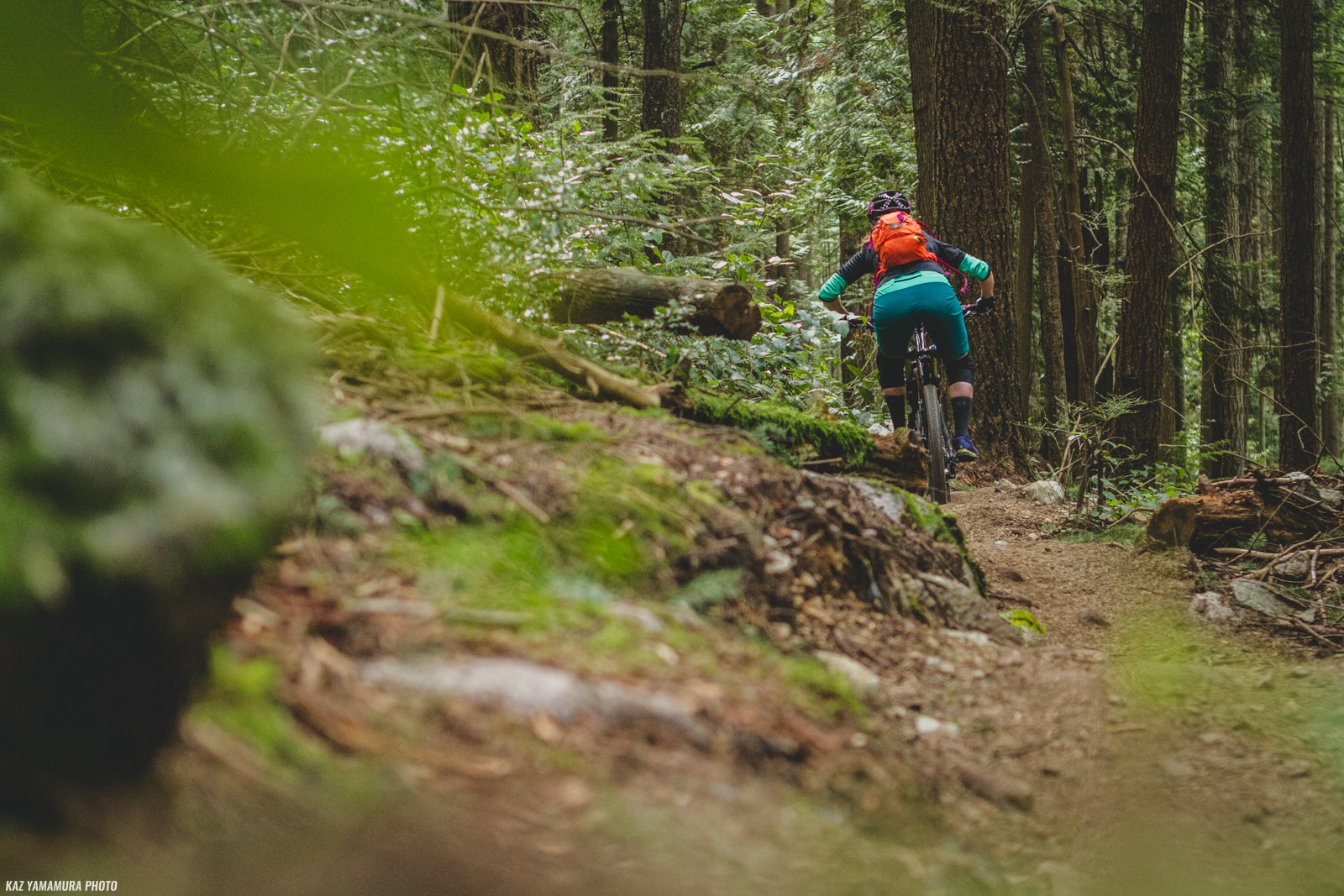 After a time of ascension on crushed gravel and loam, her path meets the entrance of a descending trail. She rewards her efforts with a break and a drink, blinking sweat out of her eyes and sitting down into her seatpost. Her body now belongs with the soaking foliage. Her heart becomes slowed with the sudden rest and the colder elevation feels sharp at the back of her throat. She begins to fumble with protective padding and make quick adjustments to her trusted mount. Fingers in the grooves of her brake levers, helmet strap tucked neatly under her chin, one pregnant pause fills the air. She hears the chirp of chickadees, a stream trickling in the distance, the world well aware of her presence while seemingly unconcerned by her actions. Her consciousness is now fixated on the incredible beauty of her habitat, an overwhelming gratitude, a seemingly underserved sense of karma. Air sucked in, she brings the weight of her body down hard on her pedals, letting out a sound between a cackle and cheer as her attention is drawn to her sudden burst of speed.

The daredevil and the coward begin a heated debate in her mind as she tries to imagine a ‘safe’ line down this formation.

Now she is flying. She chooses the swiftest line down the tangled mess of trail, her heart pounding with a friendly fear as she tackles steep rocks, clusters of roots, and wide arching berms. Trees and ferns whip by, no longer her spotlight for attention, as her eyes fixate around the bend and through the trail. In this moment, nothing else matters. Not the man-made restrictions of modern life, not the rat race, nor her station in the eyes of others. In this moment, there is only her drumming heart, her tireless lungs, her robust machine, and the thin stream of gold dirt spilling through the forest. 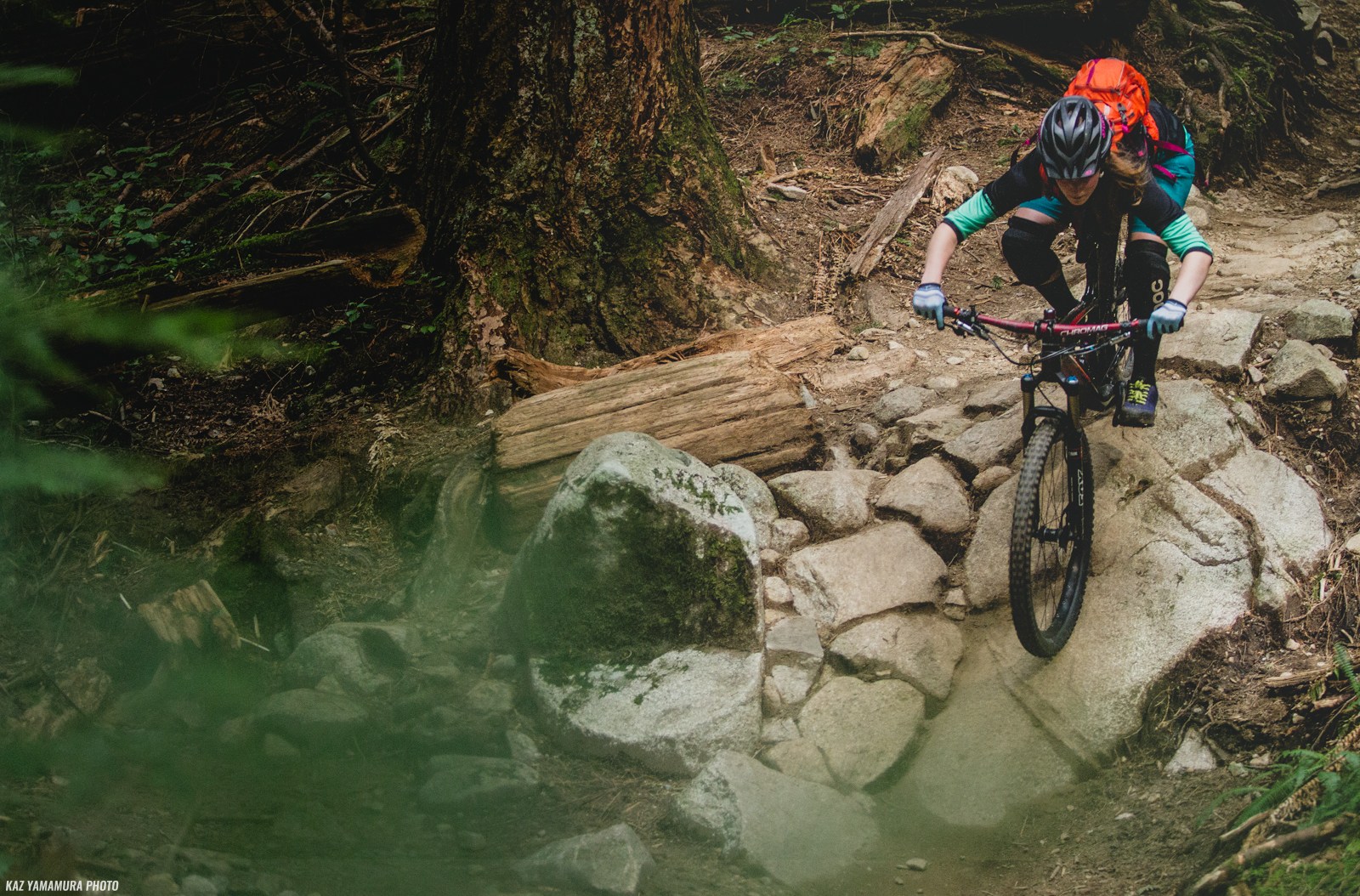 She skids around a corner as her eyes fix upon a nasty section of upcoming trail. She nearly topples over the bars as her brakes are applied seemingly without her will. The sudden silence envelops her as she peeks over her bars and into the abyss: a large root in front of a sheer slab of boulder, both of which feed onto an algae-soaked bridge that slopes down a meter before rounding a large dogwood. The daredevil and the coward begin a heated debate in her mind as she tries to imagine a ‘safe’ line down this formation. Backing up on the trail and squaring the wheels with the stunt, her hands tremble slightly as she steadies her breath in resolve. She slowly pedals forward, eyes ahead, eyes through the trail, eyes on the big root…

WHAM! She tumbles, a swirl of earth and bark and metal, and as suddenly as the chaos began it then stops. She pauses for a beat to wince at the sudden rush of pain, the still-calm forest giving no acknowledgement to her embarrassment. Her shaking feet somehow plant to the earth again, but as she straightens out her tangled mount the emotions of unease, of anxiety, and of fear swell in her chest and threaten to push up her throat and to her tear ducts. Fiercely, she shuts her eyes, calms her breath, removes herself from herself. The simple nature of smells and sounds bring her body back to ease, to resolve once again. With child-like determination, she hauls herself and the scratched machine back to the trail to once again battle headlong the beast she must face. Eyes narrowed, steadfast, she picks up her pedals and greets the descent. 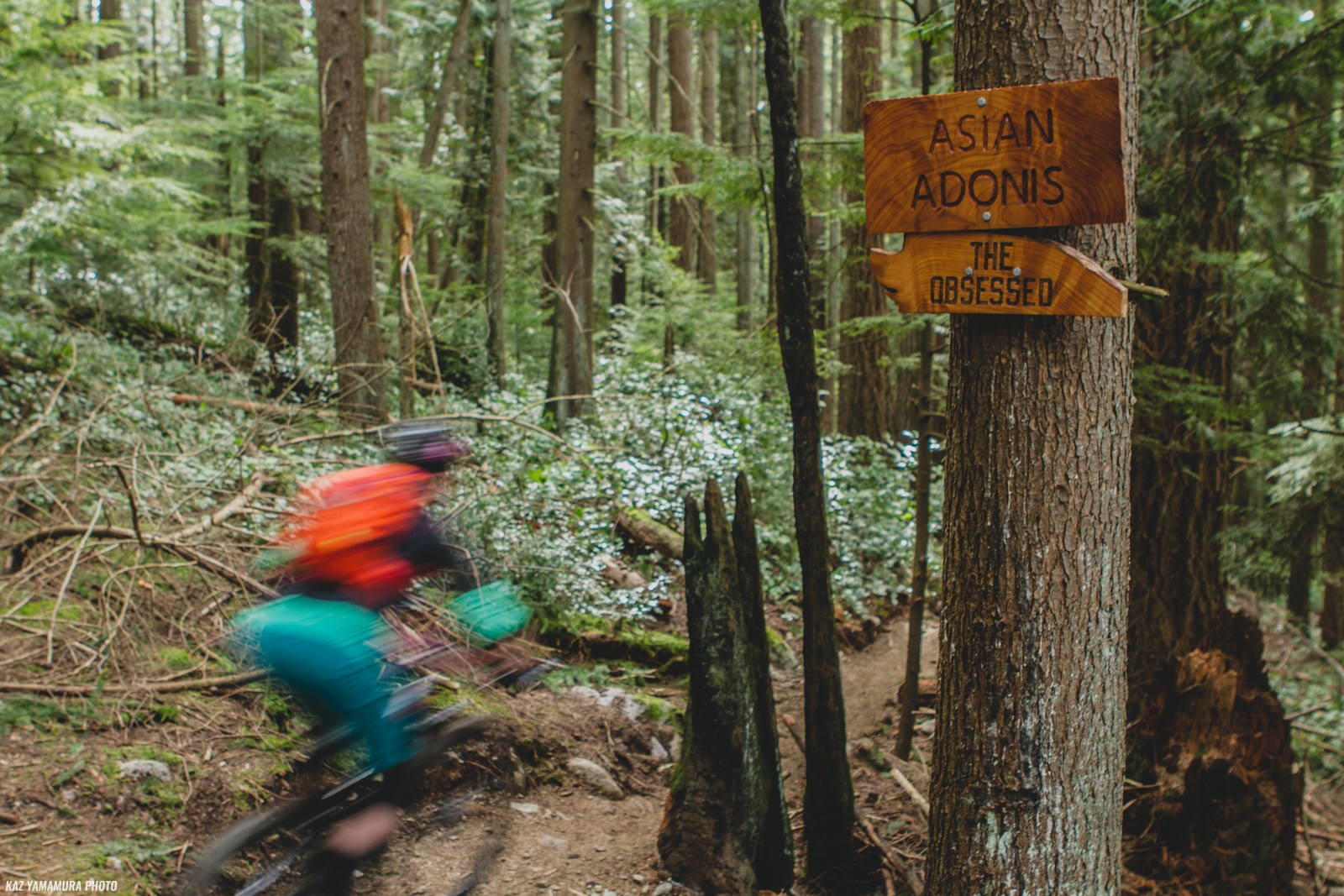 Out on the quiet street below, a dog and his master are making their usual rounds through the now illuminated neighbourhood, stopping briefly to chat with a man in a bathrobe collecting the day’s paper. They begin to make small talk about the heavy rain the night before when they are distracted by a thundering noise coming from the adjacent trees. With a whooping holler and a great rustling from the brush, the three bear witness as she is thrust onto the pavement, covered with mud, blood and a grin that fills her face. She laughs to herself while circling through the driveways, hardly aware of the shocked and curious eyes that follow her. Just before the watchers can begin to speculate as to the contents of her morning adventure, she is gone, leaving nothing but a thin track of dirt on the road trailing behind her.

She inhales deeply as waves of physical satisfaction and gratification pulse through her core. Her machine cruises lazily back down through the streets of snug houses roused awake by the vibrant light now aglow. Reminders of her impending responsibilities poke through her consciousness, but this time without fear or anxiety to accompany them. The peacefulness of the shadowed woods have eased her mind, calmed her heart, and brought joy to her being. She gently applies the brakes as she rolls to her doorstep and dismounts. She turns to give one final glance up the mountain, smiles, and wheels her tired machine inside, ready to tackle any beast she may encounter that day.

Came across this by accident. Once more, have to check assignments, will be another late-nighter for me - no riding for at least three days before I can turn my pedals in the forest again - or so I thought, I can get up early-ish tomorrow and enjoy a quick ride on singletrack right out of my back door. Thanks for reminding me that I am not stuck, thank you for reminding probably a lot of us who are stuck in a rut of our own making. You really wrote an inspirational piece, Tahnee. Thank you.

"The daredevil and the coward begin a heated debate in her mind…" i love it. and smiles after wham. great words. thank you!

Hello Tahnee, I loved this piece. I'm currently looking for great writers/ riders who might be interested in writing for The Ride Journal. We're a UK based magazine that cover all types of riders from all over the world. Have a look at our website where you can download issues 1-6 for free The downloads are good but the printed version is better. Have a little google search and let me know if you might be interested. I really do hope so. Cheers, Philip

I really enjoyed that and would swear that you were writing about your mother!

Now there's 50 shades of mountain biking if ever something was written about the topic. Just loved it!

The best think I've read in relation to mountain biking in quite a while. Thank you! 🙂

Richards soul and passion for cycling has been passed to Tahnee.

Thank you for saying so 🙂

Tahnee - Thanks for the great read! Everyday is better when it begins with some singletrack.

Thanks, Tahnee! This has me stoked for my next ride.

Reading this after reading the boards… Is refreshing. Thanks for that.