UPDATE: We originally had the price incorrect and listed the FSA Afterburner brakes at $299 CAD. It has since been brought to our attention that they retail for $199 US (approx. $257 CAD by today’s exchange rate). While this does improve the value of the brakes, we feel that our final conclusion about the Afterburner being the tinkerer’s brake still rings true.

If I had a dollar for every time someone said, “I didn’t know FSA made disc brakes,” I’d be making money in a very weird way. While certainly well-known for their road lineup, FSA has been quietly making inroads into the MTB brake market over the past year. The FSA Afterburner occupies the second of two rungs in their lineup, but with an asking price of ~$259 CAD a side sans rotor, they’re far from a budget product. For comparison SRAM’s Guide RSC model is $299 per side for a 4-pot caliper, while Shimano XTs come in at $179.99 each. 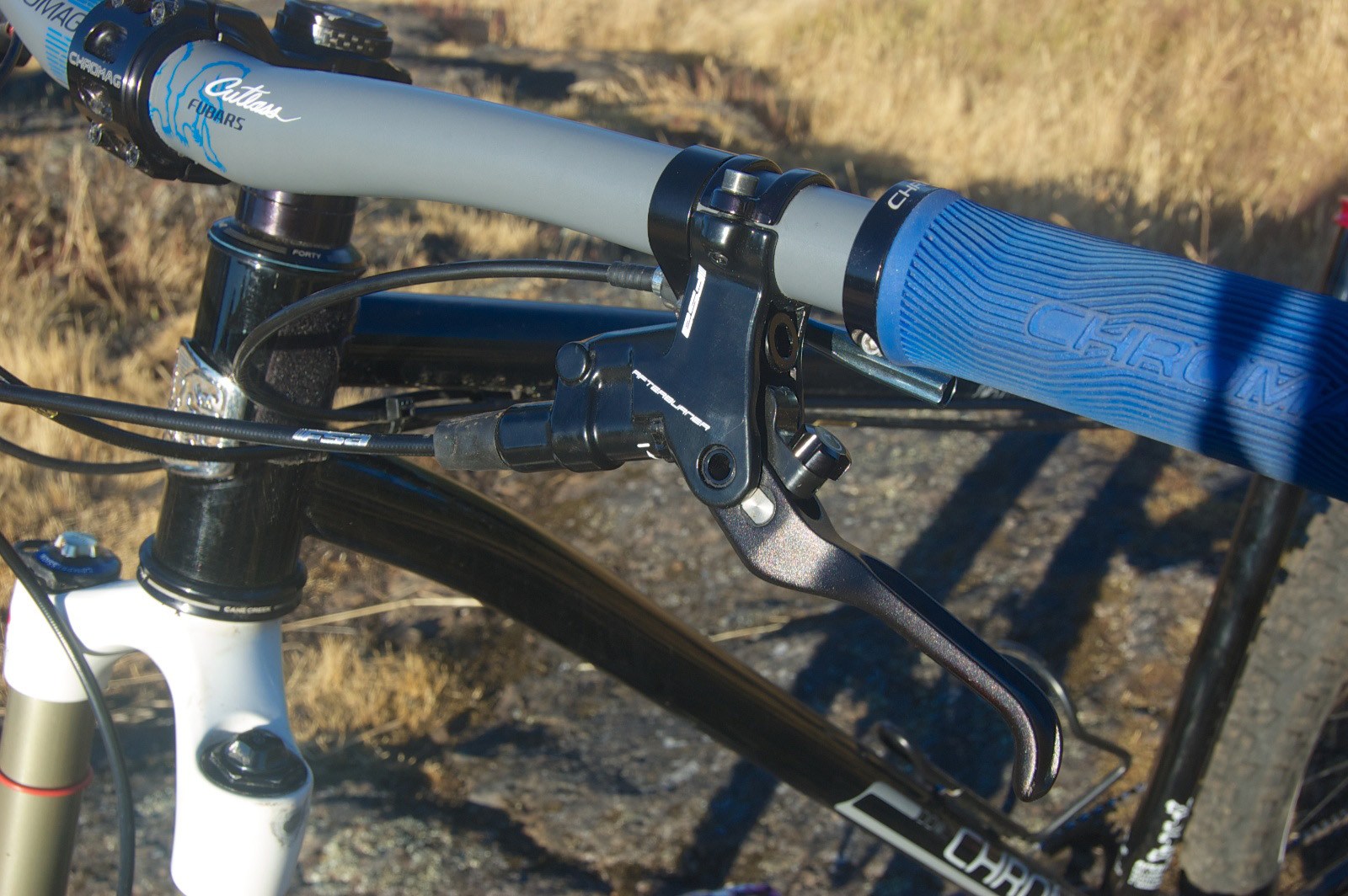 The Afterburner definitely isn’t cheap, but a black finish and an industrial look set it apart from all of the competition out there.

The biggest question I had about the FSA brakes was whether their price would reveal a big performance gap against their more mainstream rivals, or if I’d be hard-pressed to justify the cost.

Looking at the construction of the Afterburners, it’s easy to see why they have an eye-watering price tag for a brake with no exotic materials. The caliper body is a single piece of forged aluminum, and the total weight for the front brake slides in just under 400 grams. 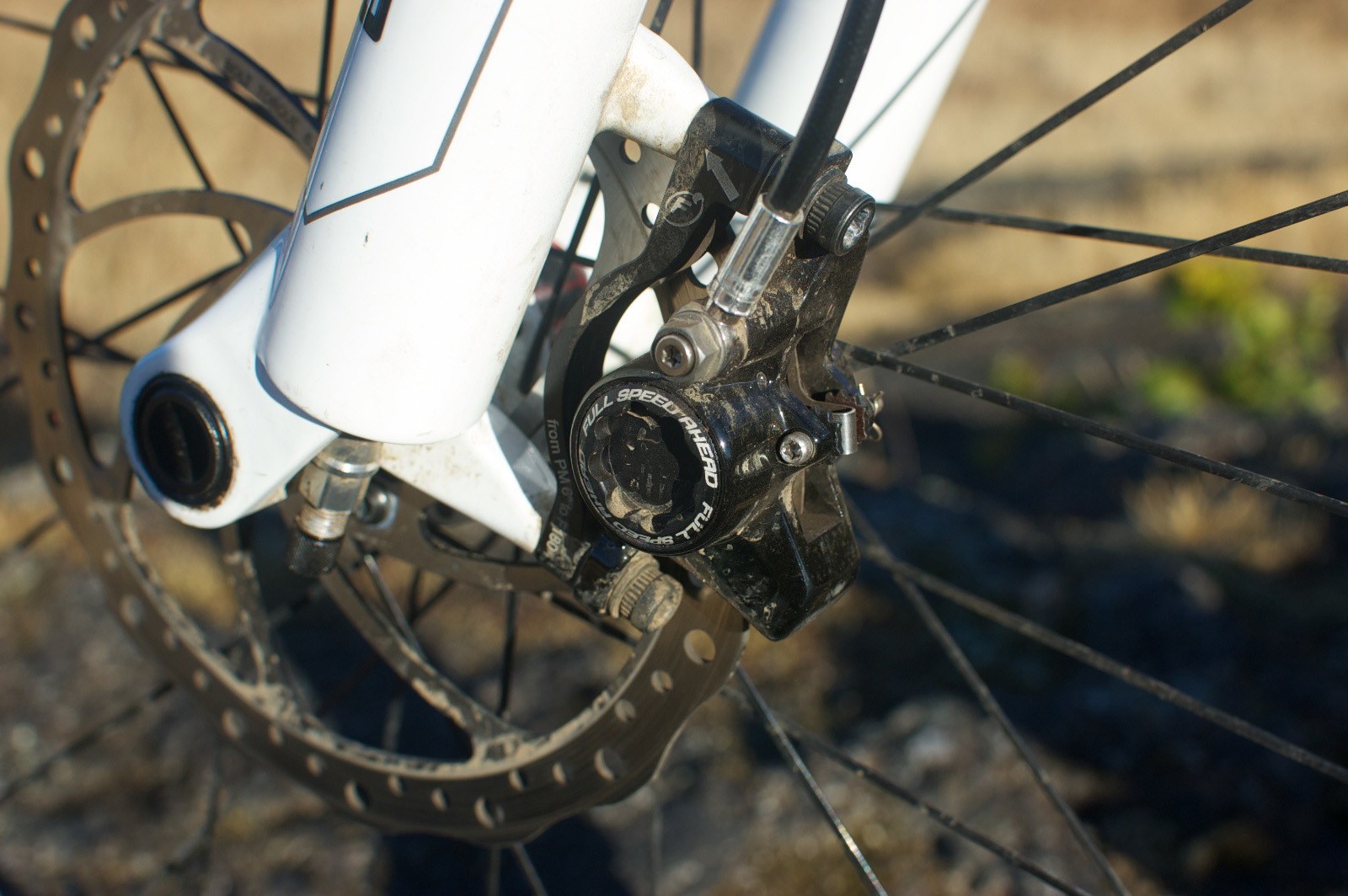 Seamless construction and a massive piston. When choosing a mount adapter, ensure that there’s enough clearance underneath for the piston; my original Shimano unit didn’t have the required space, so I swapped for a Formula bracket instead. Both the front and rear rotors never made it full-depth into the brakes, but given that FSA didn’t provide specific mounting hardware it was the best solution on-hand.

FSA has also taken an interesting turn with their hoses, running two different weaves for the front and rear. They claim that this allows for identical lever feel no matter how long the hoses happen to be.

Other nice touches on the brakes include a subtle graphics package (I’m a big fan of black on black), and the option to run both semi-metallic and full metallic pads. I sprang for the full-metal option, as I knew I wouldn’t have access to a shop for a while and wanted plenty of longevity out of the system. 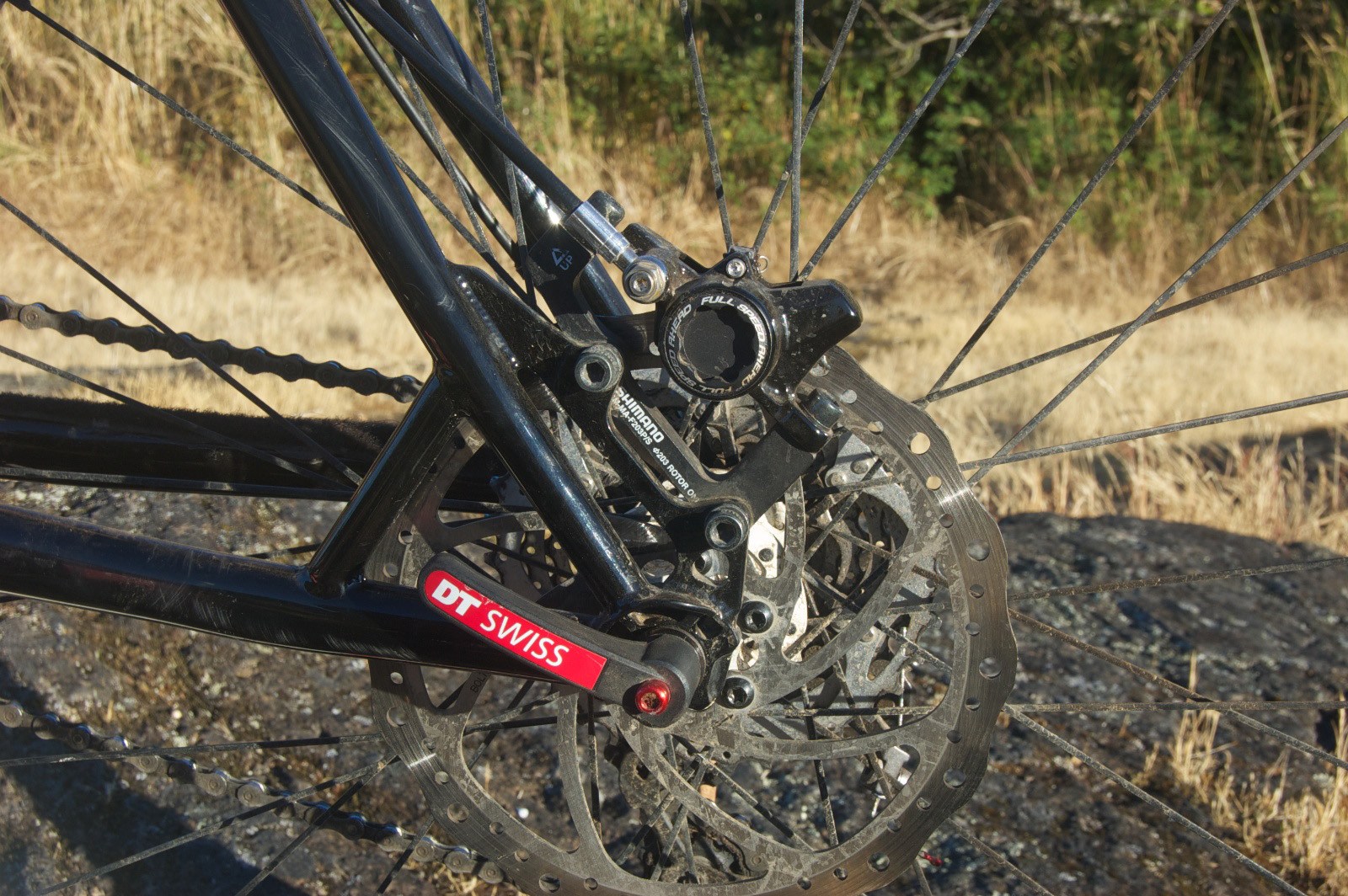 The rear mount was a bit smoother. The provided rotors started out OK, but would soon develop an unfixable heat warp. FSA does produce higher-end 2-piece rotors, and ultimately I would recommend those over a cheaper 1-piece.

Pulling the brakes out of the box was a somewhat inauspicious start to my time with the Afterburners. In order to mount the brakes to my bar I had to chase the lever threads with a tap, as there was an excess of paint clogging things up. Thankfully, that was the last of the setup snags that I would run into.

The brakes are quite easy to set up and adjust, with both the lever reach and stroke adjustment dials having a solid feeling to them. The levers themselves are definitely longer than Shimano’s, but are spacious enough to allow for a good dropper post position, and easy compatibility with any shifter. I’m also a fan of the position of the reach adjust knob, as it’s tucked out of the way in the event of a crash. As someone who’s managed to ding them in the past, it’s nice to have one less thing to worry about replacing. 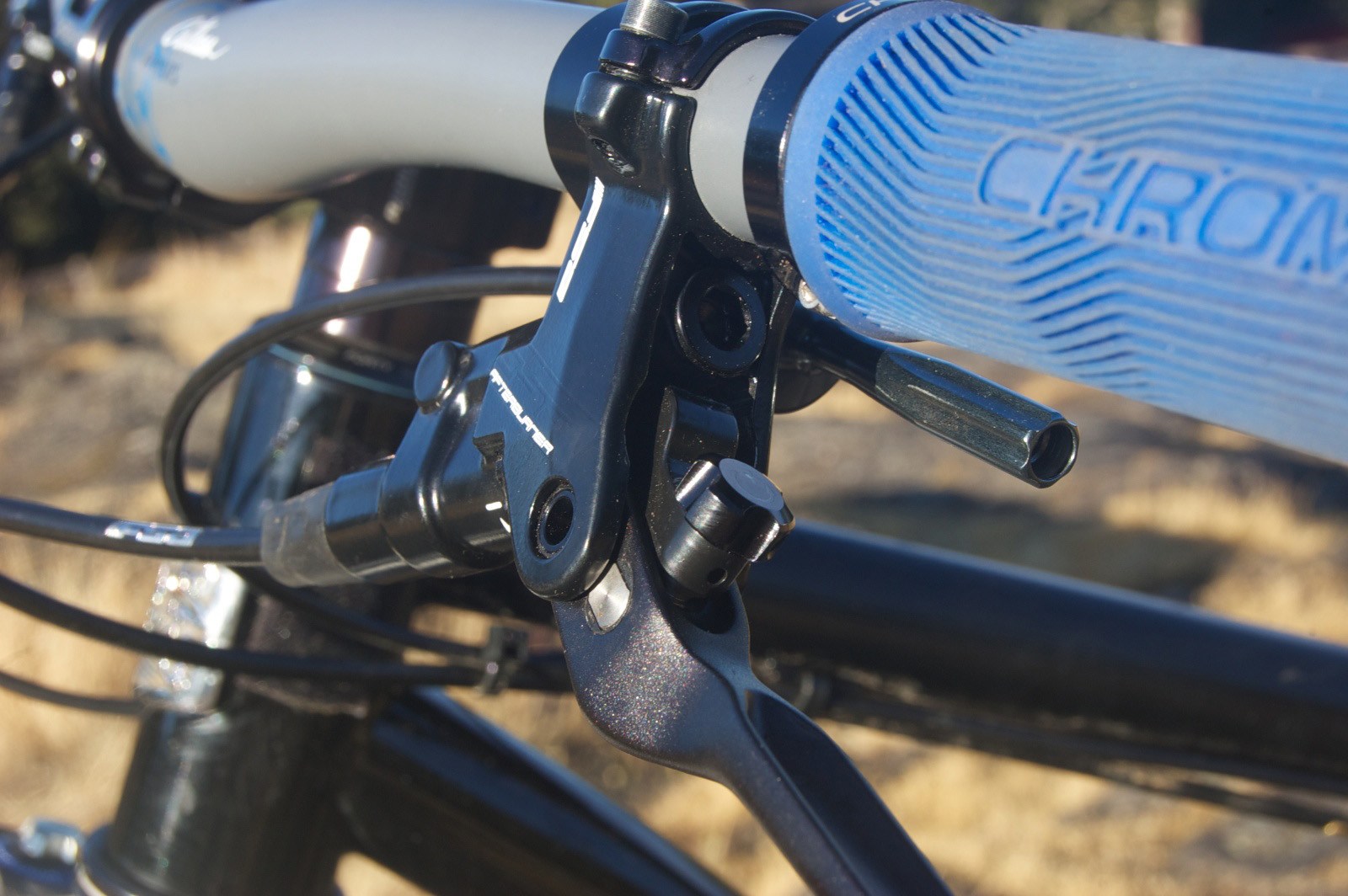 I love the fact that the reach adjust knob is both tucked out of the way from potential harm, and made of machined aluminum. 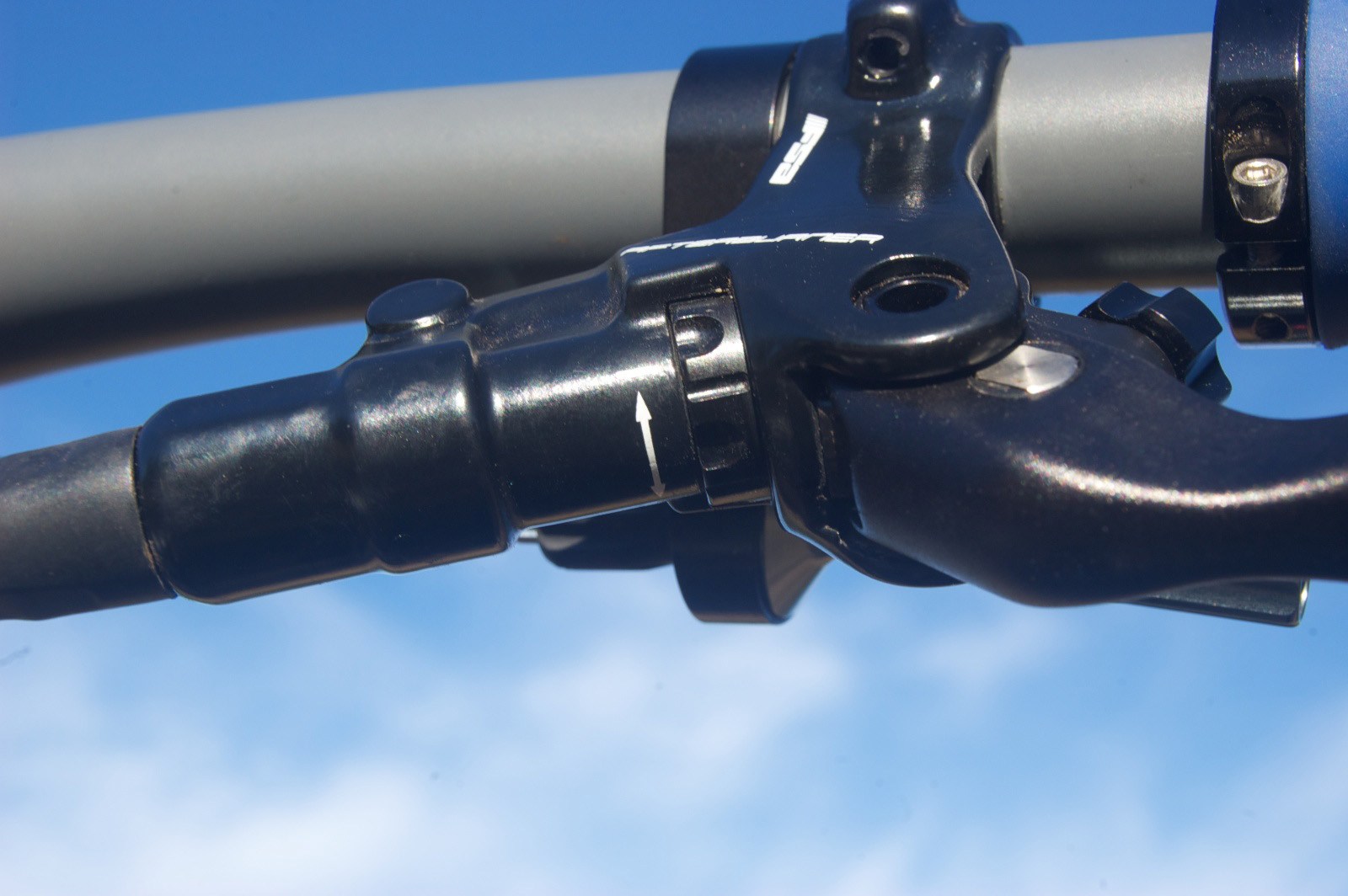 The same goes for the pad contact dial. Smooth action with definitive clicks make this far simpler to use than a tiny screw.

Heading out onto the trail, the first thing I noticed was just how much more power modulation the Afterburner had than several other brakes I had been riding. Pulling down on the lever didn’t immediately result in the pads seizing onto the rotor like a terrified toddler. Rather, there was a more gradual embrace of metal on metal, increasing to a full-on death clench if I yanked the lever to the bar.

Lever feel is great as well; there’s plenty of real estate for those who prefer two finger braking, but the dog leg on the lever arm is secure enough for riders who run a single digit. The combination of reach adjust and stroke adjustment meant I could run my levers close, but still have all that power and modulation on tap. This came in extra handy during steep rock face descents on the Island, where locking up the wheels simply isn’t viable.

Despite the excellent feel and scads of power, little issues kept cropping up during my test period. The 1-piece rotors FSA sent to accompany the Afterburners developed a warp, and no amount of time truing them could bring them back to their original state. The rear brake also began to stiffen up under extended descents, despite a bleed during the installation process. I wound up swapping the rotors for a spare set of XTs I had, and after another bleed the rear brake was good, but I could never get it to feel as good as the XTs I had run on my intern bike. These are minor issues to be sure, but on a brake that costs $300 a side, I was expecting perfection and just didn’t find it.

Servicing the brakes was relatively simple. They use mineral oil and all the hardware matches up to the requisite Shimano bleed kit bits, so any shop can take care of that. The pads are top-loading, and the pistons are easily reset with a pad spreader, or a wrench in a pinch. 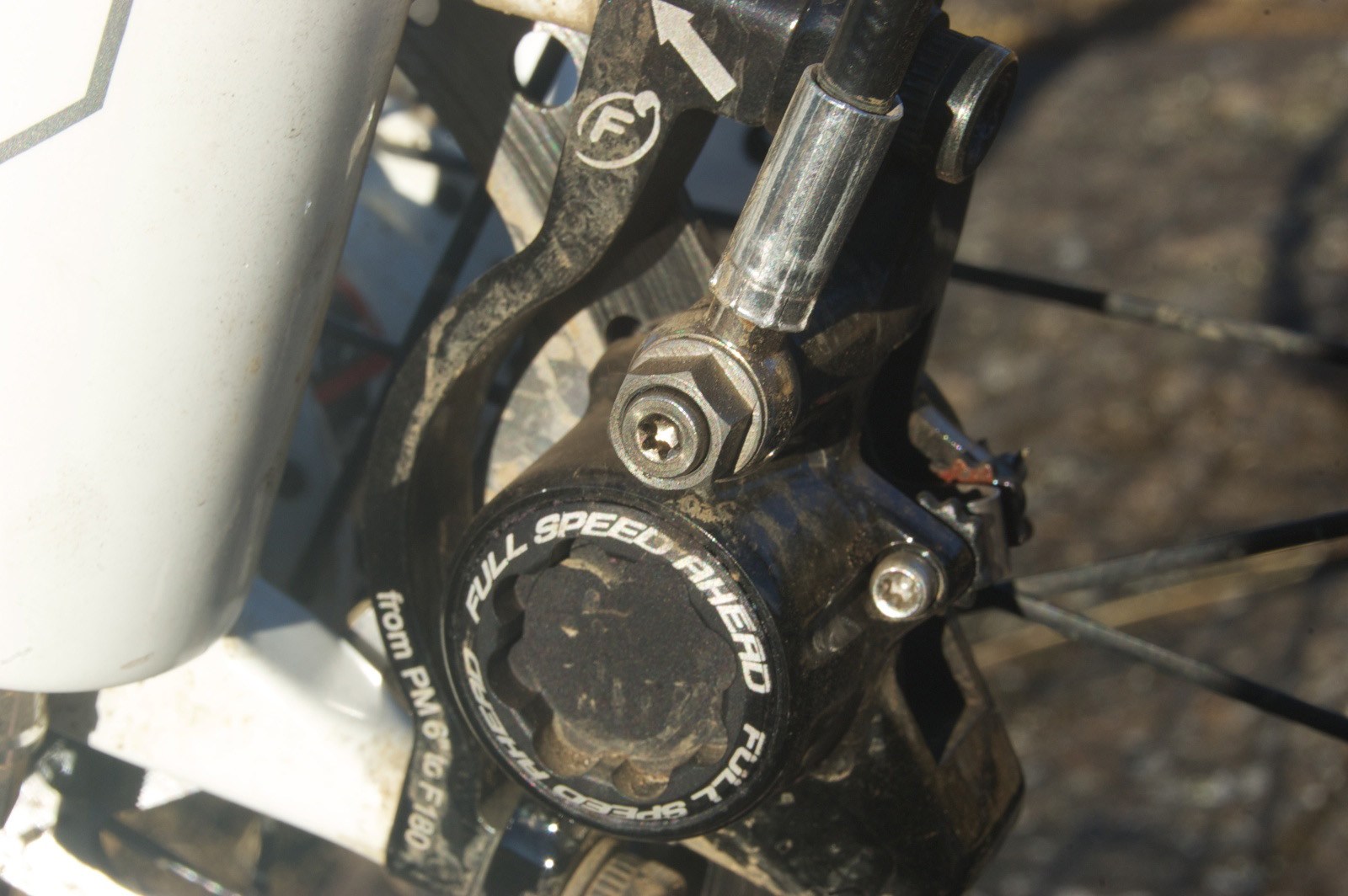 The bleed port is integrated into the banjo, so I highly recommend removing the pads before bleeding to prevent a potential contamination disaster.

Overall, I feel a bit torn with the Afterburners. When they were running flawlessly, they were a fantastic brake. There was more than enough power to stop me, with the modulation required to finesse my way down the hill. But little issues throughout the test period left me feeling frustrated. For 260 bones a brake, I expect things to be perfect out of the box, and they just weren’t.

The best way I’ve found to describe running these brakes is to pull an analogy from the car world. Riding with the Afterburners is a lot like owning an Alfa Romeo. For the person who buys them with the knowledge that there’ll be some tinkering involved, a smattering of frustration, and some dirty hands, they’re going to love it. People who want something to just work perfectly buy a German saloon. The Afterburners then are like the Alfa: a unique performance product with a different set of demands, and definitely outside the box.

Would you be willing to trade better lever feel for a little extra work, or do you prefer things to work just out of the box?

i run brakes that work wonderfully, and are not at all the big 2. why spend, $2-300 on brakes made by 13 year olds when a little more, you can have hopes………..and so far, have worked flawlessly

Imagine how well they would have worked in the back if the pads were fully contacting the rotor. Use the right rear rotor adapter. No hate. Just sayin.

$300 is XTR level money so why would you bother with the grief? Warped rear rotor smack of poor design in 2015.

I prefer out of the box personally, although i do still sport 2×10 so that has its own set of unique alfa rameo traits