Gritty Beard Syndrome. While not recognized by any “official” medical authority, Gritty Beard Syndrone, or GBS for short is a terrible disease that tends to afflict males who opt to ride their mountain bikes in wet and muddy conditions without adequate fender protection. Symptoms of GBS include finding gravel, sand and in severe cases, mud in one’s beard.

I was suffering from a severe case of GBS when I was presented with the RaceFace Mud Crutch. The first thought that popped into my head was “is this thing really enough to help me combat my GBS?” followed shortly by “it looks like it’s simply a commercialized version of the old zap strap and recycled tube solution.” 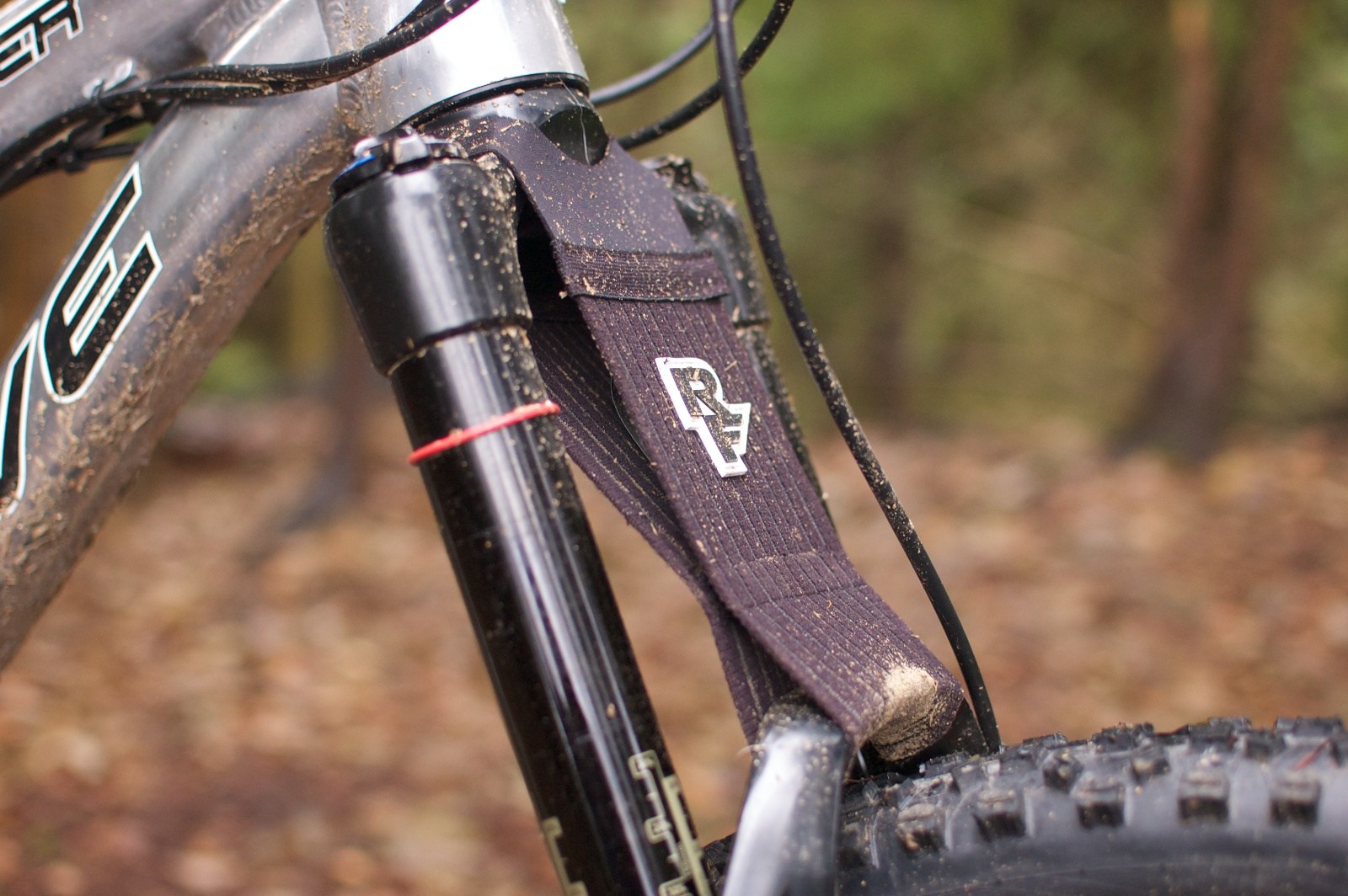 The Mud Crutch: More glamourous than fishing a tube out of the discard pile.

My doubts about the Mud Crutch started to fade during the mounting process on my bike. Rather than futzing around with slicing a tube and however many zap straps it takes to secure the damn thing, the Mud Cruch seamlessly wrapped around the fork arch, and was securely fastened with Velcro around the crown. So simple even a ham-fisted mechanic like myself could do it. 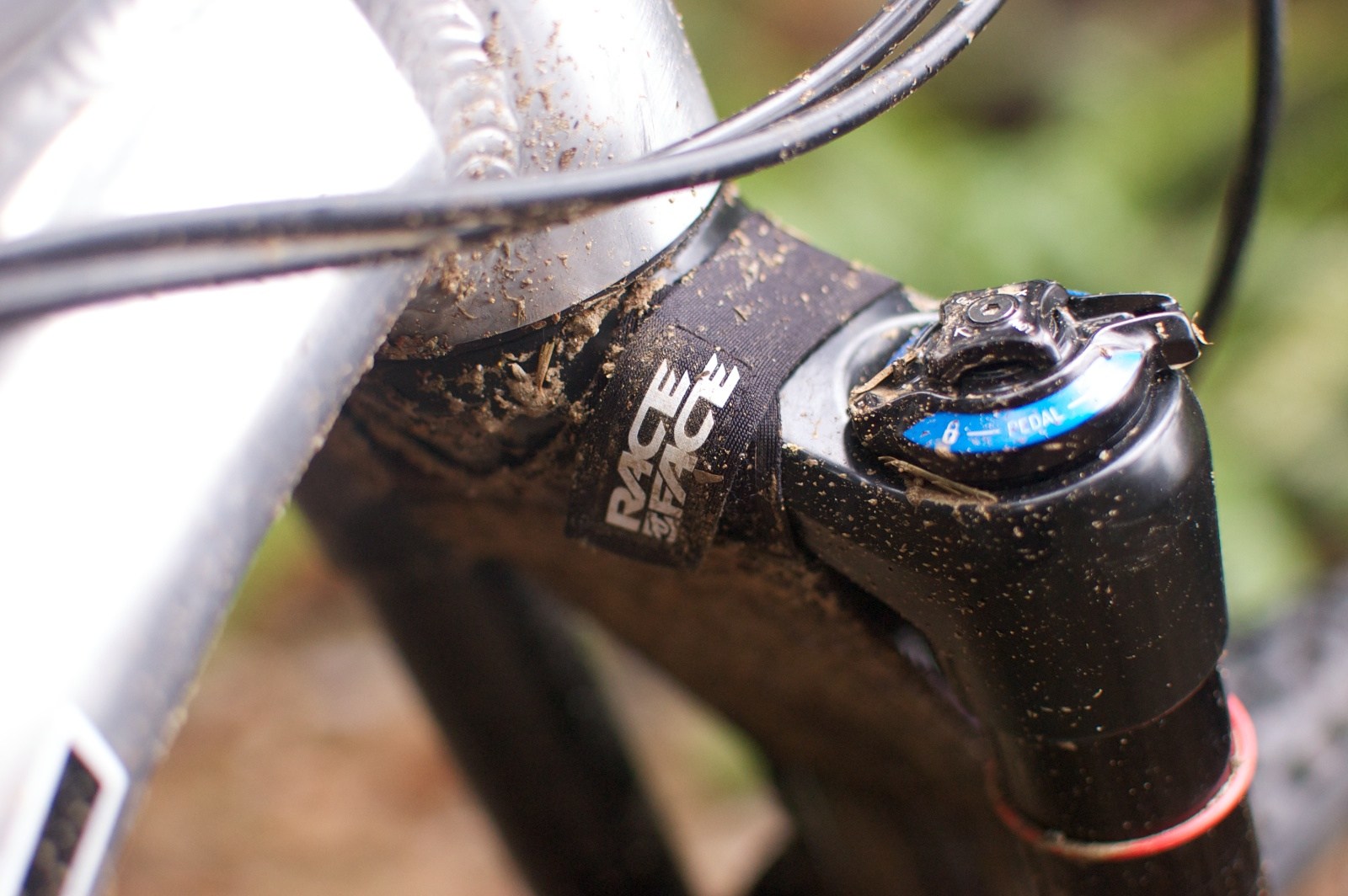 Futz-free velcro straps made installation a breeze for my hands of pork.

The next big test for me was whether it would be effective at keeping my beard (and the rest of my face) free from trail debris while out and about. My first few rides were during a cold snap, and the Crutch did a superb job deflecting chunks of snow, ice, and gunk away from my handsome visage.

Later rides offered the chance to really push the limits of the Mud Crutch as the snow turned to slush, and things got rather muddy. Despite the grim conditions, the Mud Crutch continued to work as advertised, keeping all manner of nasty away from my face. 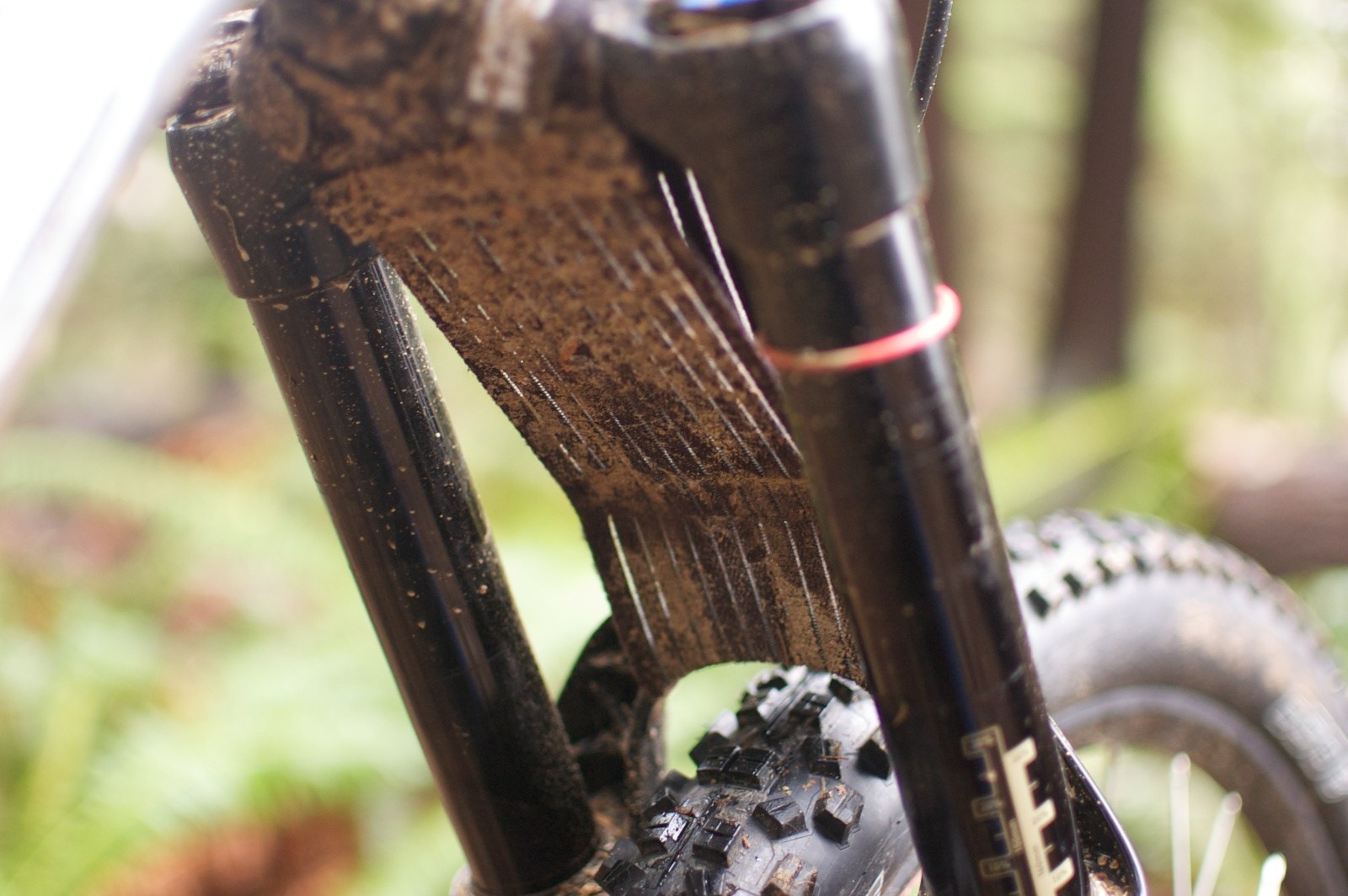 The dirty debris of a winter ride where it belongs (not on my face).

For all of the mud-stopping and gravel-deflecting ability of the Mud Crutch, there are a few minor nit-picks. The piece of Velcro that is used to secure the material around the fork arch will occasionally detach during high-speed rough sections of trail. This has been remedied with the addition of two bobby pins, which are keeping things locked down.

If you do plan on running the Crutch as a front-fender solution, know that it will be able to catch most of the trail debris thrown up by the front tire, but it’s not able to catch all of it. This isn’t a huge issue, as it would take something far more substantial like the Mudhugger to snag that last 10% of the dirt. Consider it fair warning if you plan to do a supremely muddy ride – though as Morgan notes in that review, even the Mudhugger can’t catch everything.

Overall, I’ve been quite impressed with the Mud Crutch. Installation was simple, it works as advertised, and I’ve been able to leave my goggles in my pack for all but the worst weather rides. Thank you RaceFace for helping me overcome my GBS.

Do you suffer from GBS in the winter? Tell us your tale of woe in the space below…

Why would you use this over one of the Marsh Guard style arrangements?

These things just dump all the crap onto the fork seals!

Used to run one of these (the RRP version) but I found that most of the stuff that would have been flung onto my face would build up on the crud catcher and then drop onto my fork seals. Changed to a mucky nutz fender and both problems disappeared.

i prefer the mucky nutz fender

looks like another clone / copy of the RRP (Rapid Race Products) 'Neoguard' that came to market in the UK some years ago:

…guess RRP's 'patent pending' never made it to 'patent protected'?

Once you go 'handsome visage' there's no going back.