Retire The Bike or the Girlfriend?

The impression I get from your Instagram feed is that you’re having an awesome time on your holiday. How is it? When are you back?

Cheers,
Your only fan.

You know what? I did have a fantastic time on holiday. While the wonders of the Internet make it appear like I was only away for one week, I was in fact away for three. And let me tell you, three weeks of vacation is a magical thing. I come back to the real world with a new perspective. Not necessarily “recharged” or “refreshed,” but definitely more aware of the things that don’t make me happy and an increased ambition to change them. We actually got to a point where we were mapping out a life on a remote island in Croatia. Could we scrape together $30,000 per year and leave the North American shitshow behind? The realities of Croatian politics scrapped this plan.

What does this have to do with bikes, you ask? Well, this is “Ask Uncle Dave”, so nothing has changed, really. I guess this is me letting everybody know that, moving forward, I plan on spending less of my life working on stuff that I dislike, and more time working on things that give me some sort of happiness.

Shit, that actually is a bit of a problem. Because the majority of the questions that rolled in while I was away are not very interesting. And cranking out a boring answer to a boring question at the last minute is one of those things that I’ve decided to categorize as “things that don’t make me happy.”

I recently had a bad crash on my bike. I was out of province at a bike park and broke my neck, C2 to be exact. Now I have to spend the next 3 or so months living in a Halo.

I wasn’t even doing anything “extreme.” Pumping the rolls to carry my speed and on the very last one of the run, something happened and I went over the bars and well, needed to be med-evac’ed to Kelowna (from Fernie) for emergency care.

What was planned as a weekend trip turned into a weeklong hospital visit. Now my girlfriend is rather upset with the whole situation and wants me to sell my bikes, skis, and “extreme toys” and take better care of myself. Take up something like fishing or lawn bowling.

What’s worse than the arguments of what I should or shouldn’t do, is the boredom now. I’m even not allowed to leave the house on my own. Me and my dog are going crazy! What do I do to appease my girlfriend and keep me happy. Any suggestions to keep the peace?

Sincerely,
Trouble on the Home Front

Jesus. That’s really intense. It sounds like you’re on the road to recovery and it’s pretty cool that you’re in a position to be arguing with your girlfriend about your future recreational activities. I think your story should be a lesson for us all that we’re never more than a minor mistake away from a serious injury.

I’m really torn on what advice to give you. I think that most of us probably have at least one person in our lives that doesn’t understand the things that we do in the name of “fun”. Me, I’m a fairly calculating individual (in the non-psychopathic sense) and I don’t take on much risk. Especially as I get older, I find myself less and less interested in doing things on a bike or on snow that could result in serious bodily harm. But for the average person, many things that I/we do that I/we see as “routine”, they see as “crazy”.

Lucky for me, the hand wringer in my life is my Mother. It’s pretty easy to hide things from her and I generally only trot out tales of danger to purposefully rile her up a bit. I can’t imagine how I would handle a near daily discussion about whether or not it was appropriate that I planned on riding my bike down a mountain. That sounds difficult.

To change course a little bit, I have a friend of a friend who is in his mid-40’s and still on a relationship treadmill, looking for “the perfect girlfriend.” He’ll go out on a couple of dates and end things because “she’s not into the bands that I like.” Shit like that. Luckily, I seldom interact with this individual, so I rarely need to suppress the urge to slap him across the face while yelling “IT’S NEVER GOING TO BE PERFECT!” No “life partner” is ever going to be into the exact things that we are, and there are always going to be disagreements and misunderstandings and things that don’t make much sense. Every relationship is at least a bit of a compromise.

I pretty constantly find myself thinking things like “I wish I could ride my bike/ski/whatever more often” (not necessarily due to my relationship, more just because of life and all that shit). Those are the things that keep me sane. Their importance to me diminishes somewhat as I grow older, but they’re always there. I would be deeply troubled if I had to delete them from my life forever.

But I kind of see where your girlfriend is coming from. If my girlfriend was involved in a serious, potentially life changing injury, I would be somewhat puzzled if she continued to participate in the activity that led to the accident and I would probably worry like crazy if she continued to do it. But if I saw that it provided her with fulfillment and happiness, could I ever reach a point where I insisted that she give it up? I have no idea. But I don’t think so.

In the end, this really comes down to you. How important is your relationship? How important to you are these activities that your girlfriend wants you to give up? How would you feel about a life without them? Maybe your girlfriend’s attitude will change as time passes? How do you think you’re going to feel about these things in five years? Ten years? The only way forward is for you to sit down with your girlfriend, explain your thoughts and listen to her concerns. Maybe you will be able to find some sort of compromise where you can continue to participate in these activities while promising to leave some of the riskiest aspects behind? Maybe she will see how important it is to you and start to understand what she’s asking you to give up? Maybe this is one of those challenges that you just can’t move beyond? Unless you talk about it, you’ll never know and you’ll just create a pile of resentment that will most likely doom the relationship. You’re better off at least giving it some sort of chance by laying your cards on the table now.

Totes – you are the Ask Uncle Dave winner this week! You win a Giro Switchblade – since we are confident that you’ll be back riding one way or another. Send us an email to claim your prize. 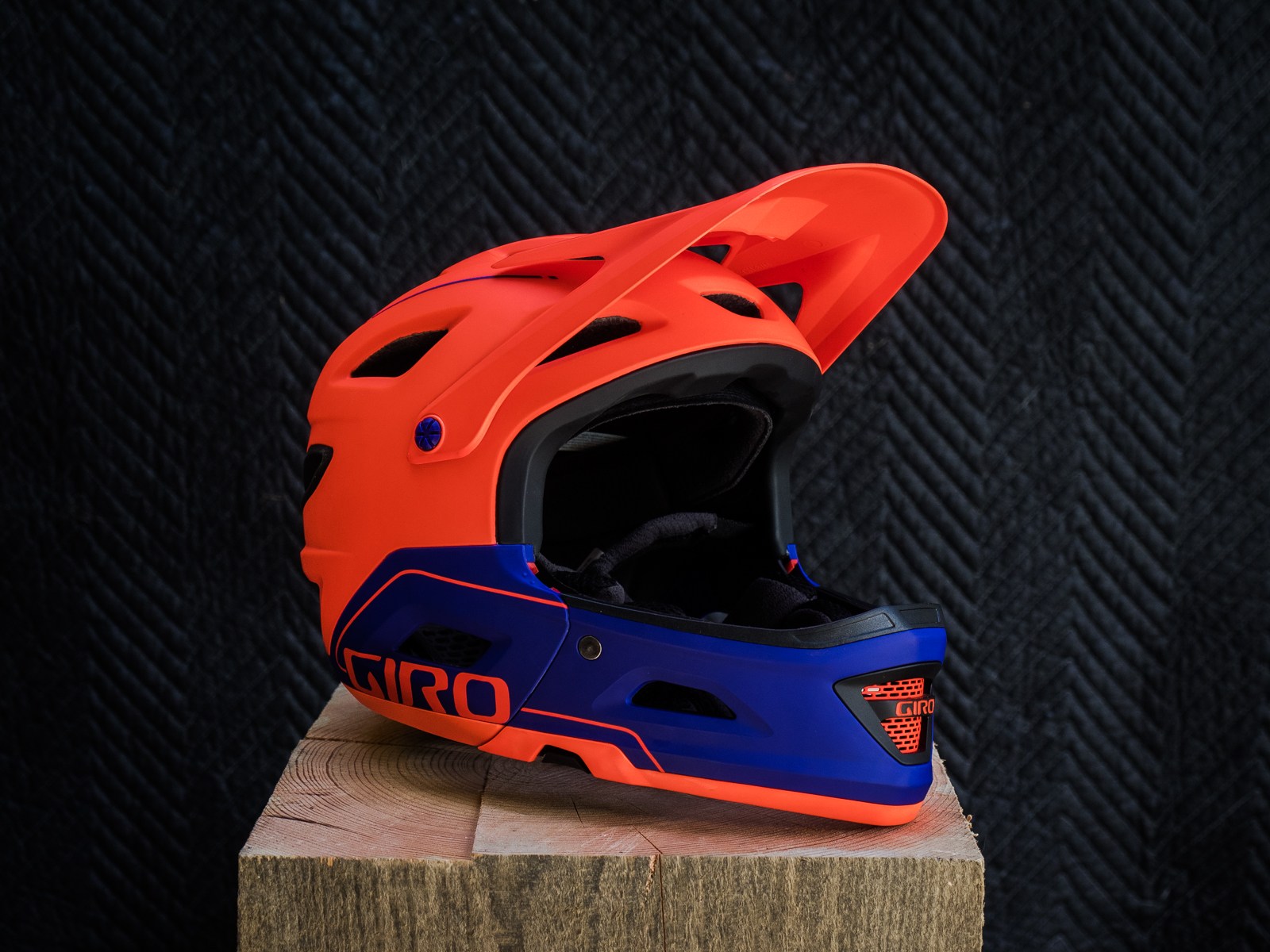 The reincarnation of the Giro Switchblade is nothing like the original. Rather than a trumped up XC helmet, it is a fully certified DH helmet that retains its ASTM certification (other than for chin bar impacts, obviously) even when you remove the chin bar.

If you’d like to win a sweet prize and see your pseudonym in lights, send Uncle Dave a question – and make it a good one to keep him in his happy place.

What would you do?

As you get older, you begin to realize your bike doesn't have to be ridden in the same way as you rode it 10-15 years ago. You maybe don't need to hit that table at such a pace. Perhaps that sky-high skinny with impaling consequences is not the best idea anymore.

I continue to ride hard trails, but I ride them differently than I used to. I'd rather go a little slower, be a little more cautious and make wiser choices so that I can keep riding for the long term, rather than attempt to satisfy my ego and make a decision I'll regret. This approach doesn't work all the time - I still fall and get hurt - but it definitely increases the number of times I can get out.

Fun is still fun, but you can change the its definition.

Oh, and hold onto that girlfriend of yours. She clearly cares about you and that's what really matters.

If riding is a part of who you are, and she loves who you are, then it's going to get weird if this part of your life goes missing. If you cut the leg off a table is it still a table?

This over reaction may also be her way of showing that she cares a lot for you. And so as Colin said below, she'll probably get over it.

I've always liked Andreas Fransson's quote "I do not go to the mountains to die; I go to the mountains to live, because that is where I feel most alive." Some of his thoughts on this may have gotten a little elitist at times, but I found they always had something that resonated with me. In Totes case he should probably replace 'die' with 'injure myself' or something. It may scare his partner less. But then the phrase may make less sense.

The flip side is getting fat and unhealthy by not riding, skiing… Pre-injury you likely have a fine balance of activities (riding, hiking, eating like you have a metabolism of a 14 year old, drinking, video games, etc.). Will she still like the new version of you as morph into the new you? I've been there and am surprised my wife is still with me after several injuries over the last 25 years. In sickness and in health… I'm glad that one was in there! I may not keep up with the 30 year olds anymore, but at least I'm still out there, and she still supports me.

She'll get over it. My buddy broke his neck last year.
I remember joking with him about riding bikes while visiting him in the hospital one day and right away she was like "Nope! No more bikes, that's done!"… 1 year later & they are both riding bikes again.
I think he did have to buy a neck brace to help try to convince her initially… but I've never seen him wear it.