WHISTLER, BC – August 21, 2016 – The largest slopestyle mountain biking competition in the world, Red Bull Joyride, closed out the final day of the weeklong Crankworx festival today at Whistler Blackcomb Mountain.  Dubbed ‘Slopestyle Sunday’, fifteen of the world’s best slopestyle athletes went head-to-head in a gravity-defying showdown in front of 30,000 spectators packed into the Whistler Plaza for the season-defining contest. 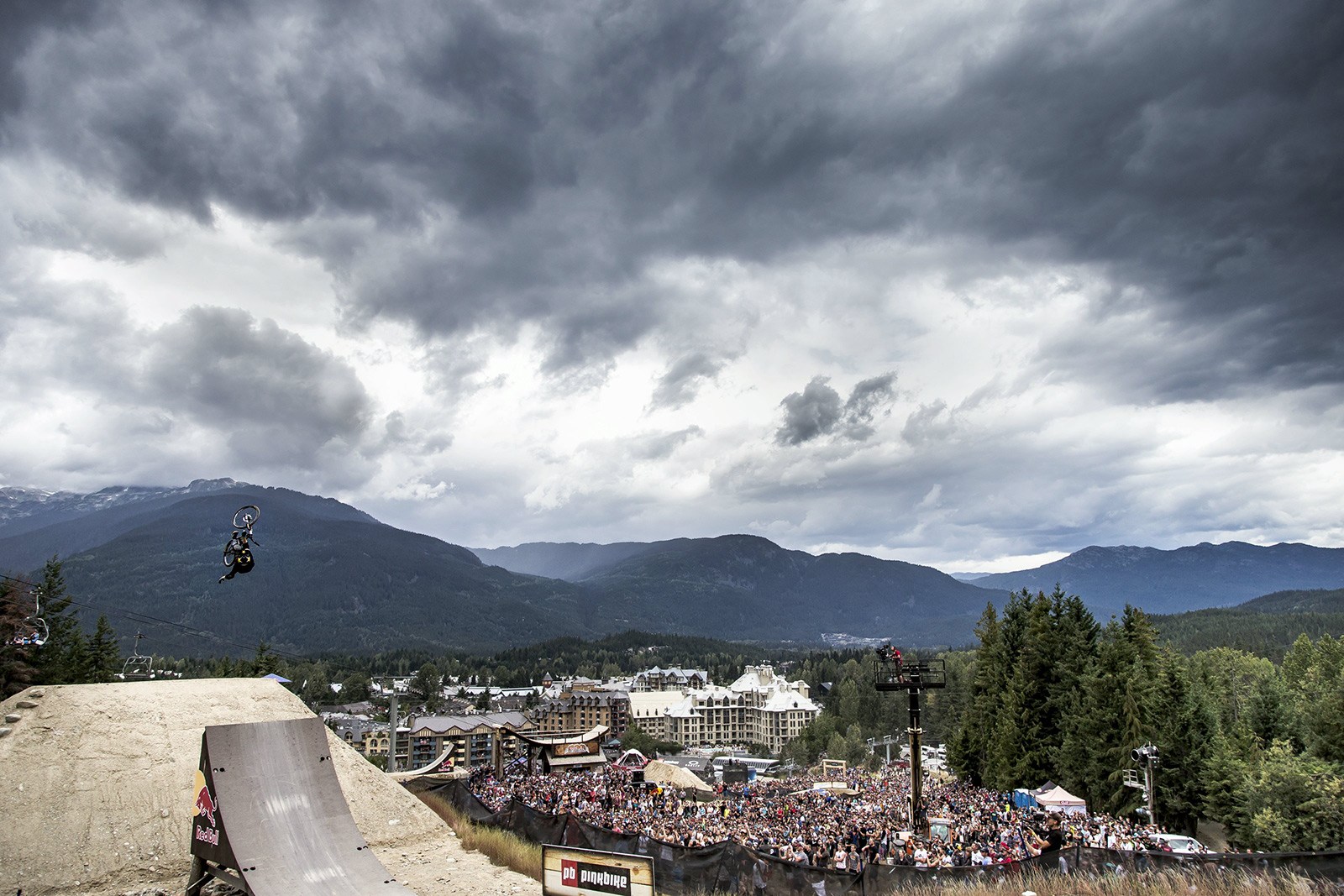 Last year Rheeder couldn’t put a run together and this year it was Semenuk who couldn’t throw down. BMX titan Ryan Nyquist may be more experienced with pressure than most and he executed an impressive and creative run at his first Joyride. Photo – Mason Mashon/Red Bull Content Pool

If there was one athlete with a bullseye on his back at this year’s Red Bull Joyride, it was Brandon Semenuk. Semenuk has held court over the Whistler event for the past three years, with a total of four first place finishes to his name as the most winning athlete in the history of the contest. This year, it was Canada’s Brett Rheeder (Mount Albert, ON) who put an end to ‘The King’s’ reign. 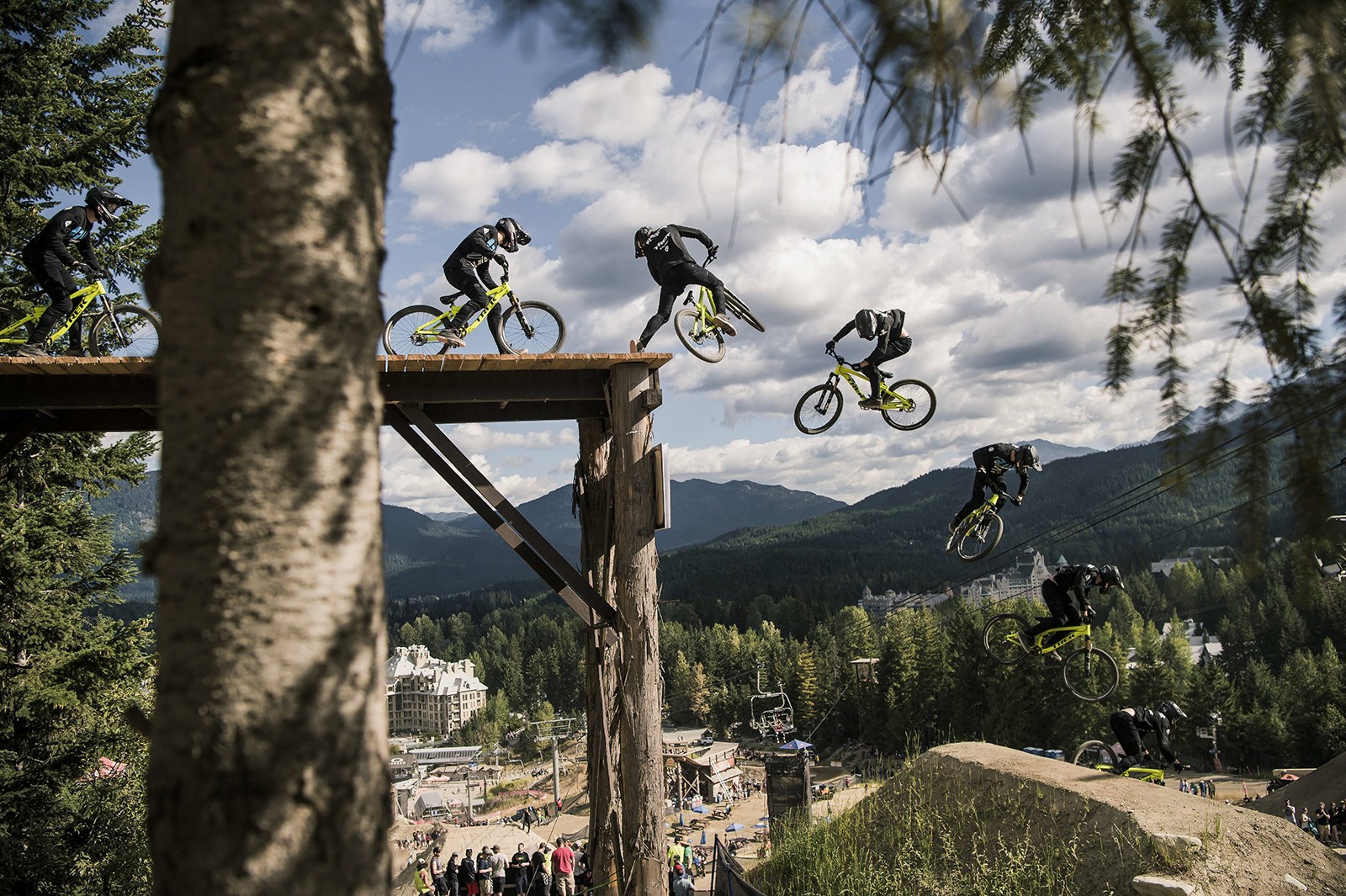 “It’s such a surreal feeling. I’ve been struggling since 2012 and after facing so much pressure last year and having two crashes, this has been a long time coming.” explains Rheeder, “I was still very nervous going into today. The conditions weren’t ideal but as soon as I dropped in, everything just goes away and it’s just you and the bike.”

The first place win for Rheeder was well deserved, following a third place win in 2014 and an upsetting result in 2015. Last year, Rheeder found himself in a remarkable position going into the Red Bull Joyride event, with a chance to win the first ever Crankworx Triple Crown of Slopestyle. Wins at the first two events of the year in Rotorua, New Zealand and France meant he had two of the three wins necessary to earn the title, with Red Bull Joyride being the final.  But with the immense pressure he faced, he succumbed to nerves and was unable to cobble together a winning run at the final event, despite being an odds-on favorite for the win. 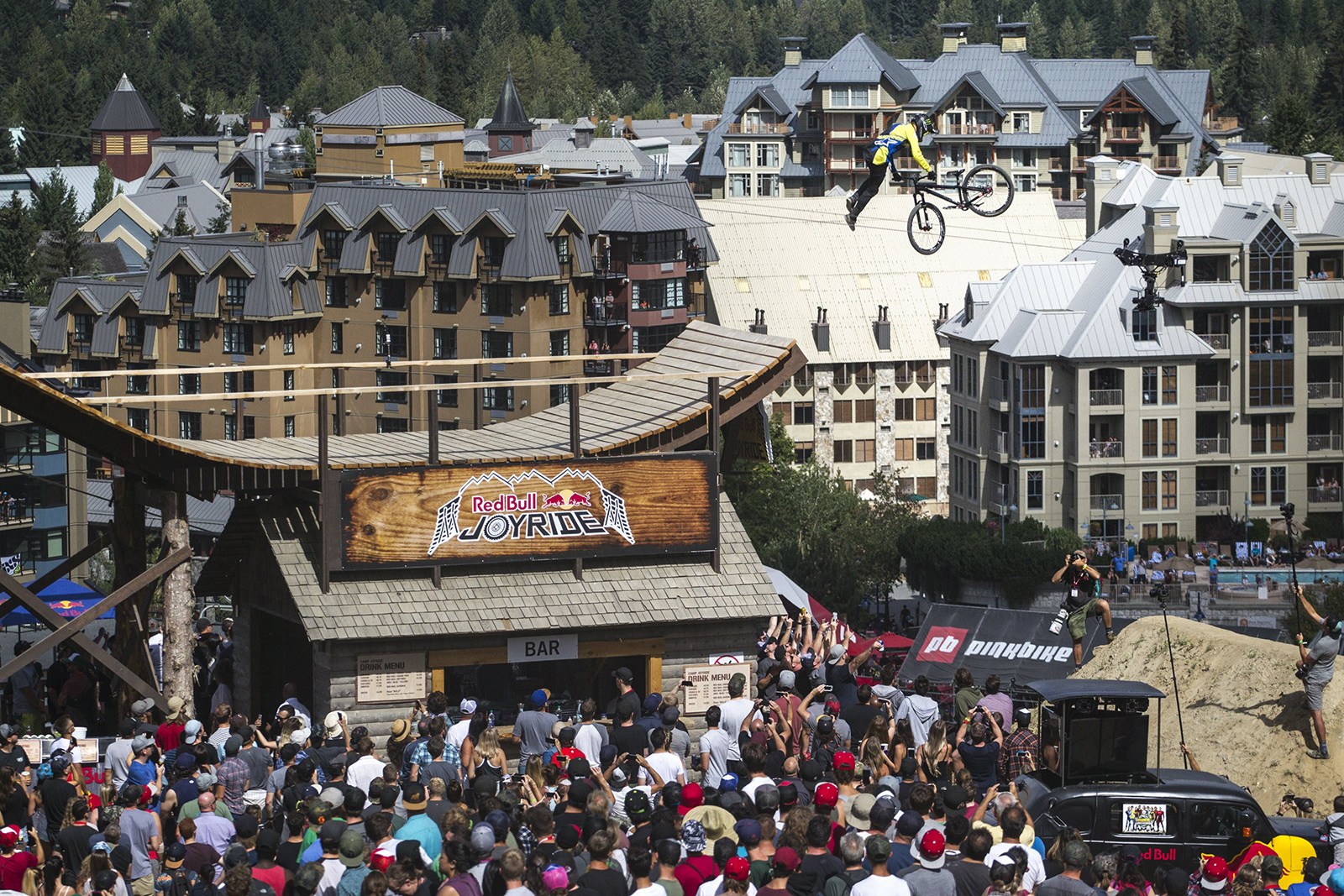 Today, following two uncharacteristically low scoring runs by Brandon Semenuk, Rheeder was able to capitalize on the opportunity, catapulting himself to first place with a leading score of 93 in his opening run. Nearly flawless from top to bottom, he unleashed an arsenal of big combination tricks including a backflip barspin to opposite tail whip in the early stages of his run, his signature cork 720 and a highly technical finish with a front flip onto the final 30ft tall feature, followed by a backflip off into the finish area below. 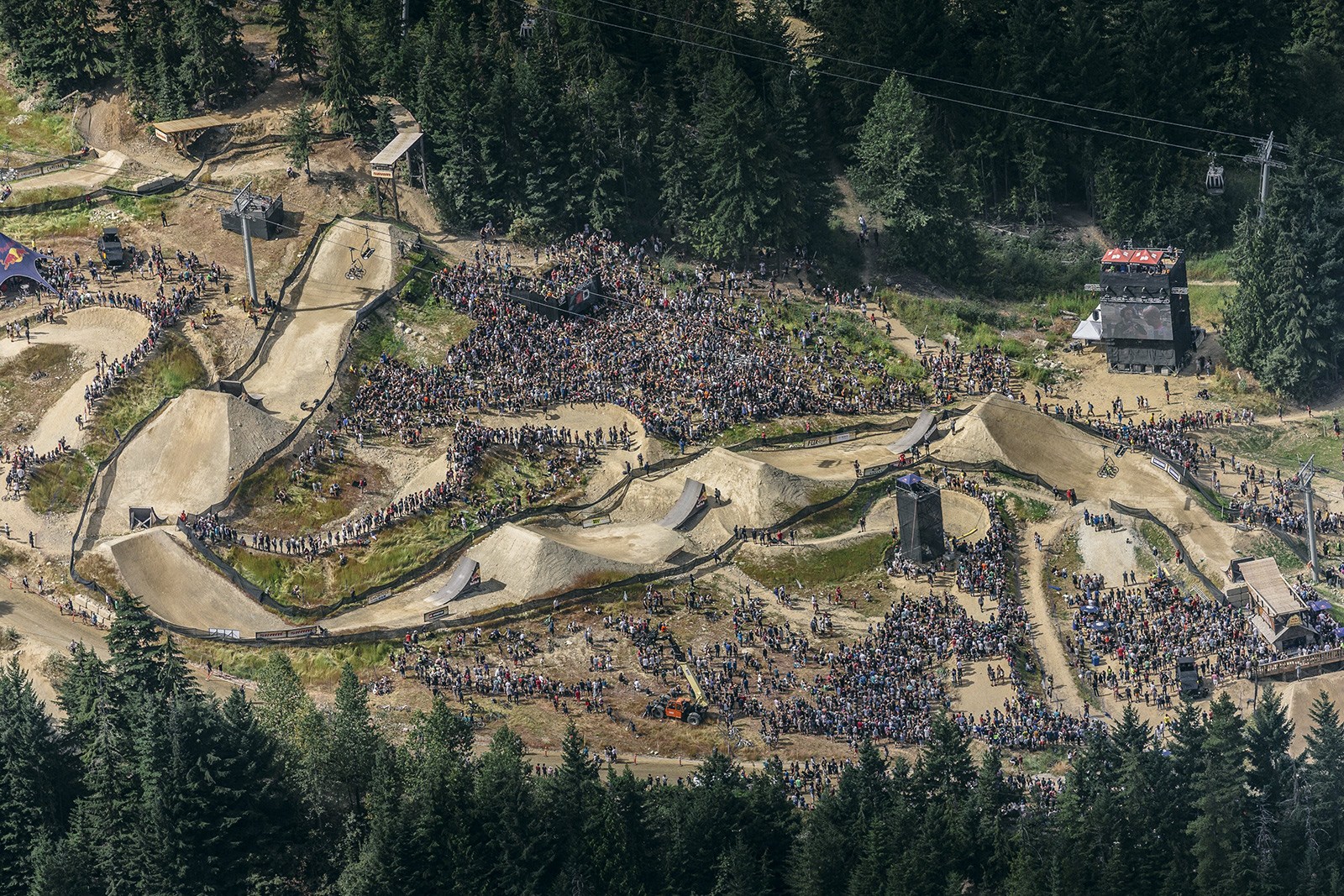 Hot on the heels of Rheeder were Thomas Genon (BEL) who placed second with a score of 91.20, and Max Fredriksson who placed third in his Red Bull Joyride debut, scoring 89.80. Just shy of the podium was fellow Swede, Emil Johansson who made a remarkable impression in what was also his first Red Bull Joyride appearance at only 17 years of age. Under the mentorship of Martin Soderstrom, both will be contenders to watch in the years to come. 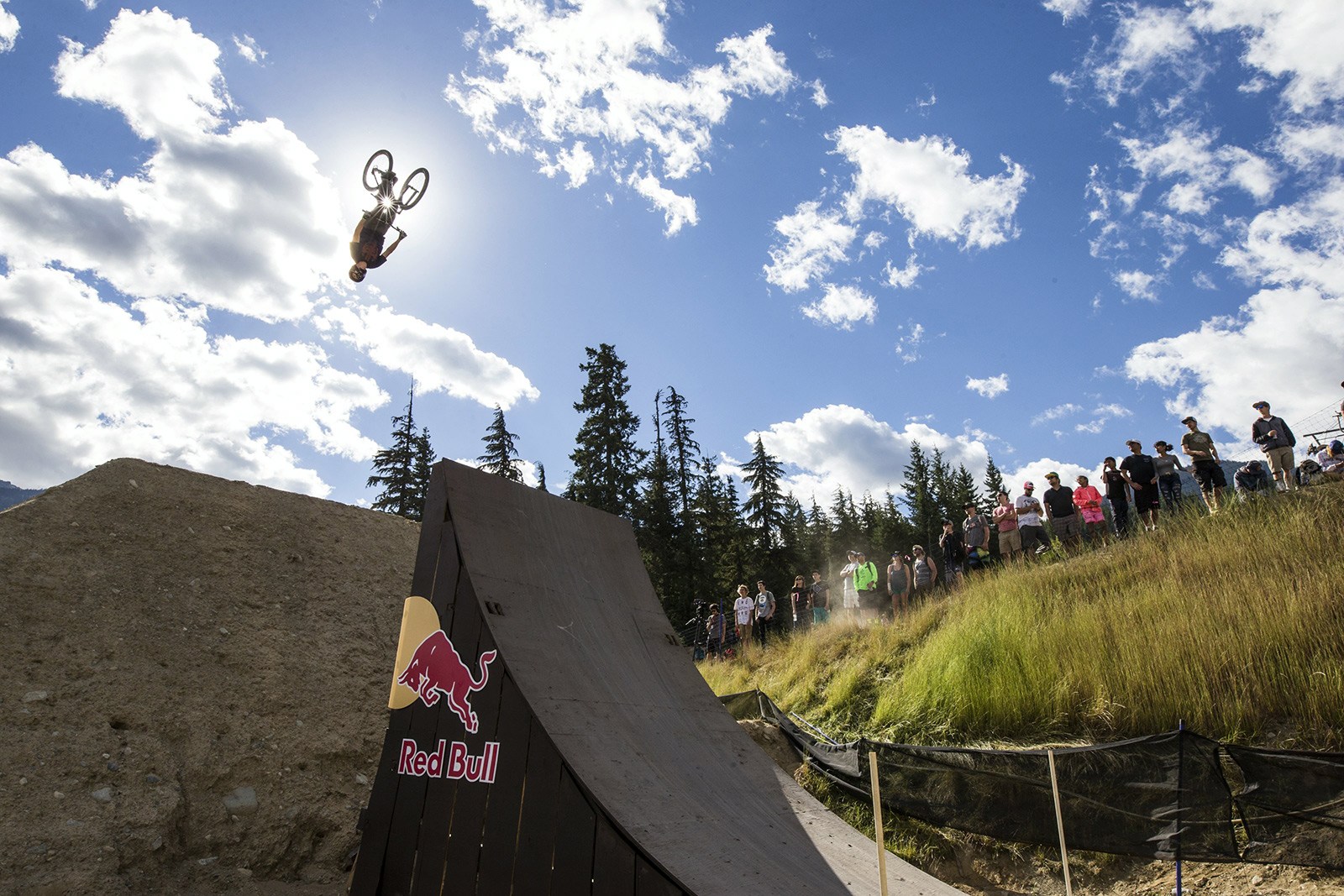 A YEAR OF PROGRESS

What a difference a year can make.  In one of the most exciting slopestyle events in recent memory, this year’s contest was a testament to the rapid progression of slopestyle mountain biking, with a bevy of first-ever tricks and new faces emerging on the scene.  Brandon Semenuk’s 180 calf-cab off the largest flat drop, meaning he essentially rode off the feature backwards, was a first-ever in the contest, and despite missing the podium, made a clear statement on the direction in which the sport is heading.  The contest also included legendary BMX rider Ryan Nyquist who qualified for the event, further validating the sport’s growing appeal. Canadian BMX icon Drew Bezanson, as documented in this season’s The Learning Curve, also debuted in his first slopestyle mountain biking season as he battled it out on the FMB World Tour this summer, unfortunately falling just short of earning a spot at Red Bull Joyride.