A preamble: Perhaps maturity and kid rearing has affected a heightened awareness of social responsibility, but I’ve become disenchanted with gratuitous gear whoredom. I’m increasingly cynical of the acquisition of new stuff for the sake of newness and wasteful consumer culture. There’s also something I find intrinsically appealing about older, well used artifacts. The accumulated wear, repairs, and modifications tell stories. Experiential traces. The ‘fixer’ mentality appeals to me – keeping shit running (as opposed to disposing of it), and applying creative ingenuity to extend the usefulness of a product when required. Mad Max crossed with McGyver. Case in point: taking a 7 year old freeride bike and turning it into an all-mountain-esque steed. Why not?

PDC Racing was a Parksville, BC based company that produced a few small runs of DH, freeride and hardtail frames in the early to mid 00’s then called it quits for whatever reason. It seems companies I buy from are doomed to failure. The 8.25, a DH / freeride frame, was fabricated by Yess in Surrey (the same guys that build Cove frames). The short link 4 bar suspension pedals well and handles bump munching duties with aplomb. The BB was low for the day, and chainstays are short, making it a not-unreasonable candidate for a modern aggressive trailbike hack. Now I’ll let the pictures do most of the talking. 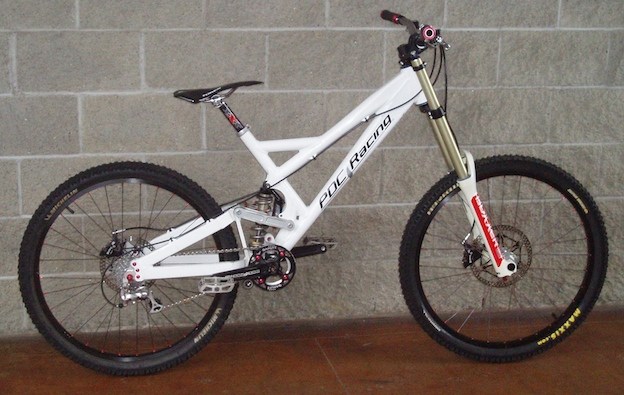 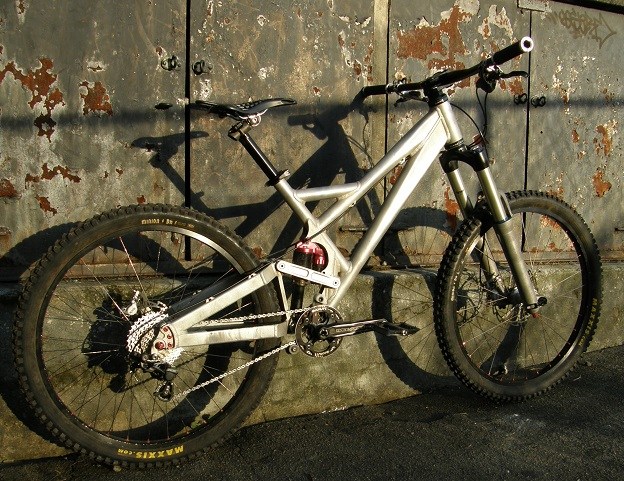 More than a few miles and 7 years later. An appropriately patina-ed backdrop. The frame shed it’s paint several years ago. 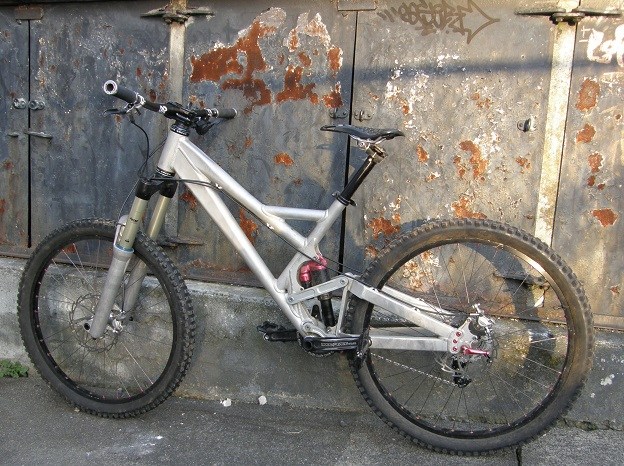 The oft neglected left side shot. 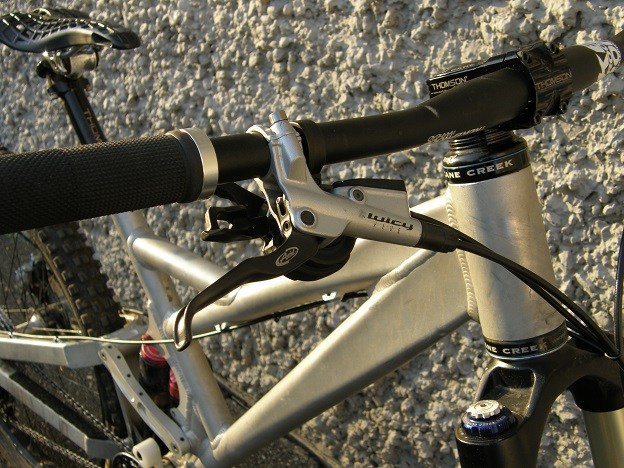 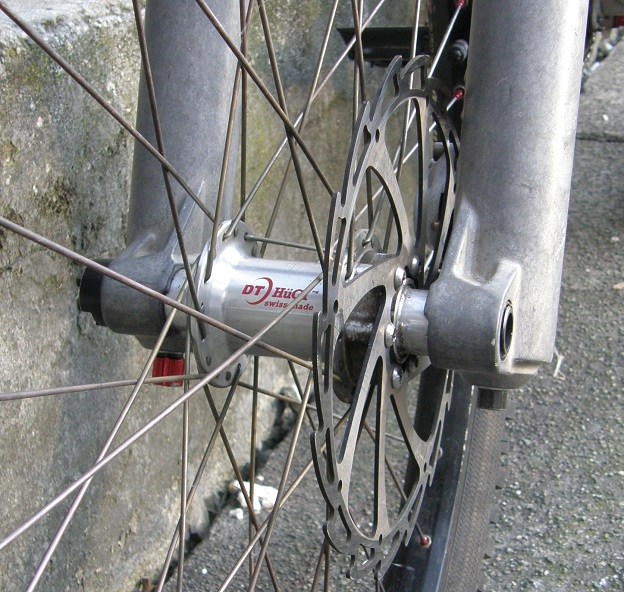 DT/Hugi front & rear hubs (circa 1998). These have been on a few of my bikes, starting life on an OG Santa Cruz Super 8. Lightweight and durable. The star ratchet freewheel design is super simple to service and awesomely loud. Quality Swiss engineering.

The front wheel is laced with Marwi Ti spokes (circa 2001). I tried them as an experiment on my 36lb RM7 (I was weight weenie-ing my DH bikes back when tanks were in fashion). They proved to be durable so I continued using the same spokes as a proof of concept (the rim was replaced a couple times). About half the weight of a straight gauge steel spoke, plus rainbow pretty! I’ve always used aluminum nipples on everything. The Sun Rhyno Lite rims are another killer value item – nice wide profile, decently light and burly, and they cost $20 each. Not fancy, but functional.

The 2 Step Totem was stripped, devolved to Solo Air and lowered to 160mm using a skateboard bushing. I love this stoutly fork. Head angle sits at about 64*, bottom bracket at 12.5″. Silly slack and slammed. 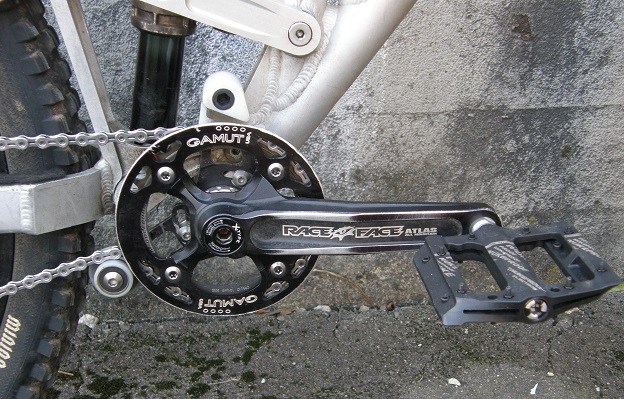 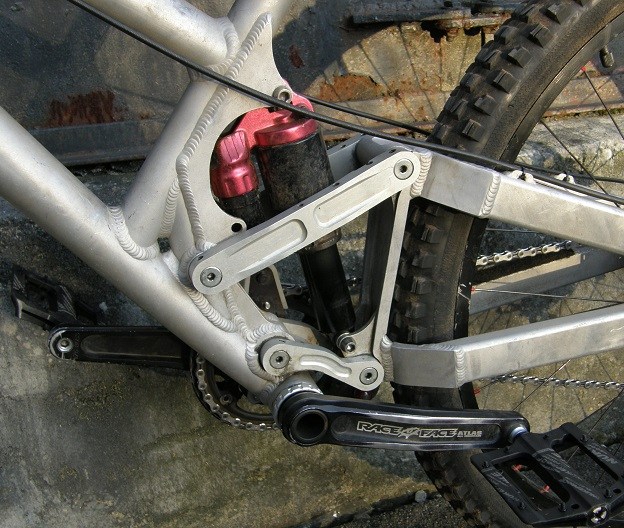 Short shocked: from a stock 2.75″ stroke to 2.25″ (via shortening the 2.5″ stroke Roco with a chunk of PVC pipe), dropping travel from 8.25″ to 6.75″. 4 link suspension runs on needle bearings. Interestingly enough, the bike was designed for a second shock mount position (see the lower hole) to accommodate a short shock; I never saw one in this mode, however (nor did my bike come with the required short shock mount bracket). Neat concept though. 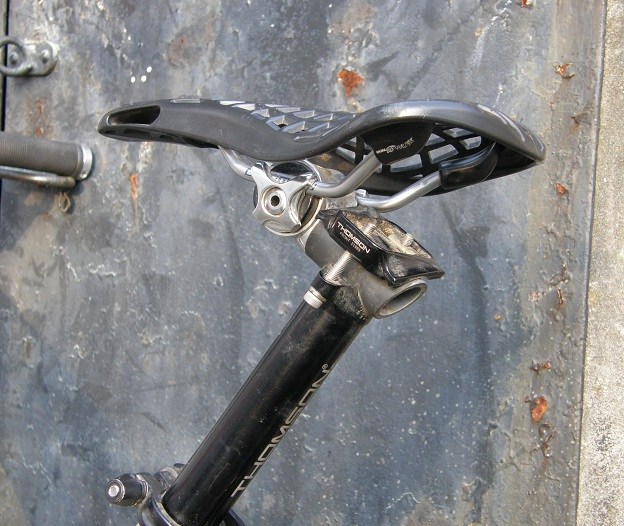 Seatpost of awesomeness. The super slack seat angle sucked for climbing; to make the bike somewhat pedal friendly I needed a solution to move the seat to a more ergonomic position. The fix involved (as do many) a dig through the tickle trunk of junk. Rotate Thompson, insert chopped Bontrager carbon post, et voila. The Tioga D-Spyder saddle is cheap, light, and bomber. No fabric to scuff or rip; padding is for the coddled and weak. 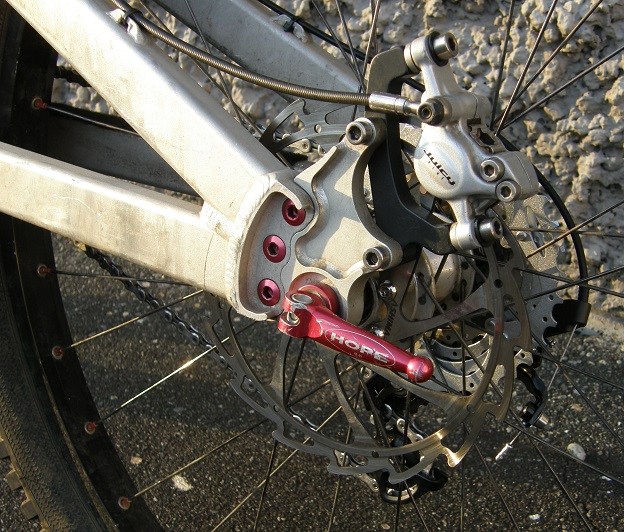 Avid Juicy 5 brakes – bang for the buck setup: paired with super light $25 Ashima / Aligator rotors and a handful of ti bolts from the toolbox, were about the same weight (and performance) as Juicy carbons, at half the price. 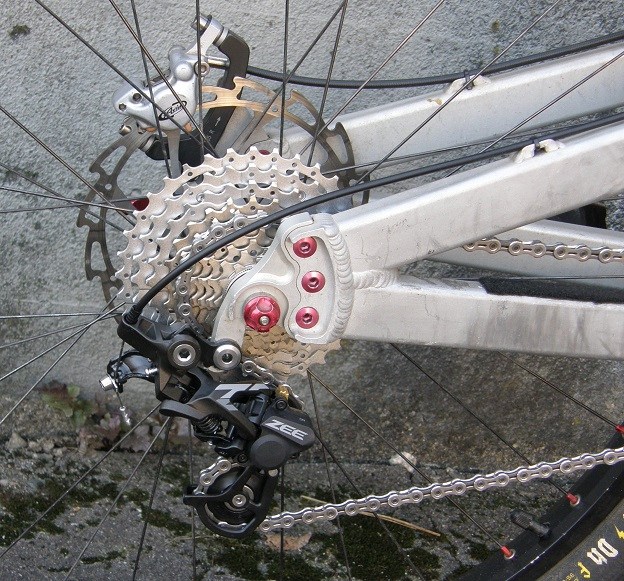 Zee derailleur. I typically run a cheap short cage road mech like a Tiagra, but I like the low profile Shadow designs, and wanted to run a larger range cassette, so decided to splurge. We’ll see how it holds up, and if the clutch works as advertised. 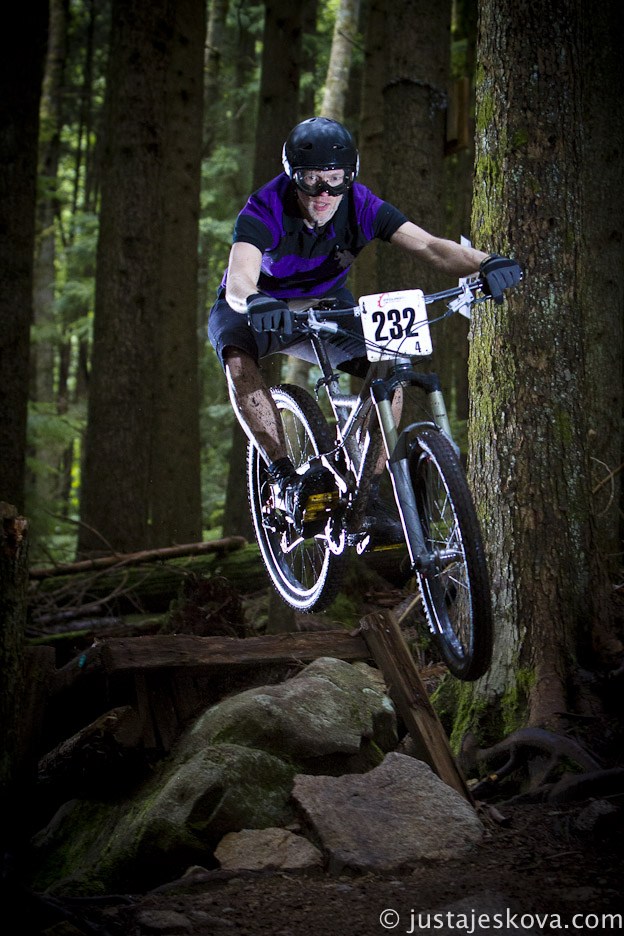 And a couple action pics. Super-D mode; in it’s element. 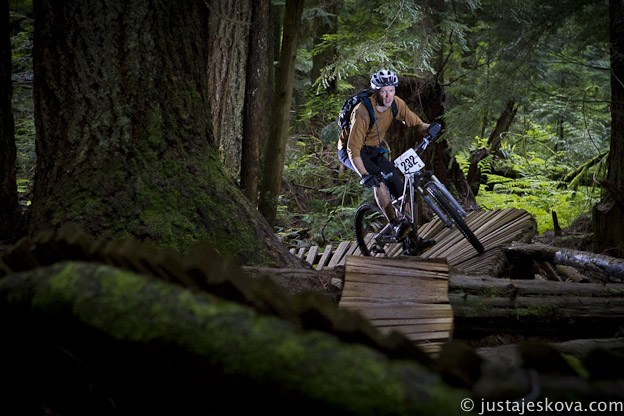 Enduro mode; not ideal, but gets the job done.

The build leans a bit more towards mini DH territory, but I’ve always liked trail bikes with a descending bias. The super low chassis is pretty neat – pedal clipping isn’t as prevalent as I thought it would be, and the bike rails. In summation: a cost effective reutilization of old hardware, and a fun experiment. Bikes with character: I like them.

When a project surfaces out of Perry’s collection, you know the result will be covered in purpose-chosen details. Period correct, OEM+, or straight up weird?

I know this is an old article, but I just picked up one of these frames for less than $100. I had one in 2007 and loved the bike. I'm so glad I found this writeup.

Cheers to a unique build! Sure beats the hell out of letting a bike waste away in a basement, or worse, end up in a landfill. Plus, you're probably riding more than me. So good on ya.

The bike is pretty cool, but your attention to the little details and knowledge of high value parts is amazing. I would love to see a column dedicated to low cost high value builds.

It sure was. My 2005 Kona Kula Deluxe came stock with the same Atlas cranks (bought Sept 2004.) They finally died after 6'ish years of constant pedaling use in wet and muddy conditions.

Cool build. I'm amazed the seatpost stands up to that amount of torque in a way that it totally wasn't designed for. Have you bent lots of bolts?

I've got a great solution. Just get 2 wedge plates made that are cut to whatever angle the difference is between your bike and say 71degrees. Weld those on the seattube and then weld your other post to the 71 degree face. This would enable the use of a reverb if you made it right and it would look alot better. Other than that great job! I love old bikes

Great point of view.
That seat tube and and resulting fix are scary.
I'm nowhere near the gear whore I once was. I still replace stuff often but try to avoid pointless purchases, preferring to wear things out to the point of unusability before replacement.
Stoked to see those older bomber frames still doing so well.