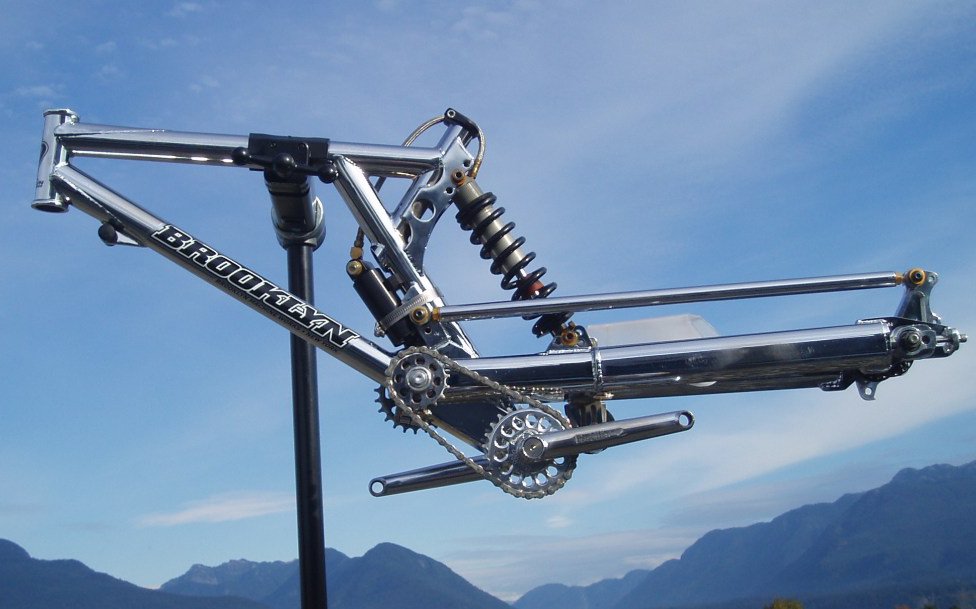 Here’s something a bit different – a look at a bike I no longer own. Digging through some old photos got me all nostalgic; nearly verklempt, even, so I decided to toss them together along with a few words as a bit of a historical document.

I’d harboured a fascination with Brooklyn Machine Works since I first saw their handiwork at Interbike back in the late 90’s. Uniquely industrial monster bikes from the most unlikely of places – NYC. Though I never really got into tank bikes, I was intrigued by the aesthetics of these, and I still consider the more race oriented designs of BMW co-founder Chris Boudreaux – the Racelink, and the later Superco evolution, the Silencer, some of my favorite dh frame designs of all time. I was never in a position to buy a new Brooklyn, but when a used Brooklyn TMX showed up locally on Craigslist, I jumped on it. 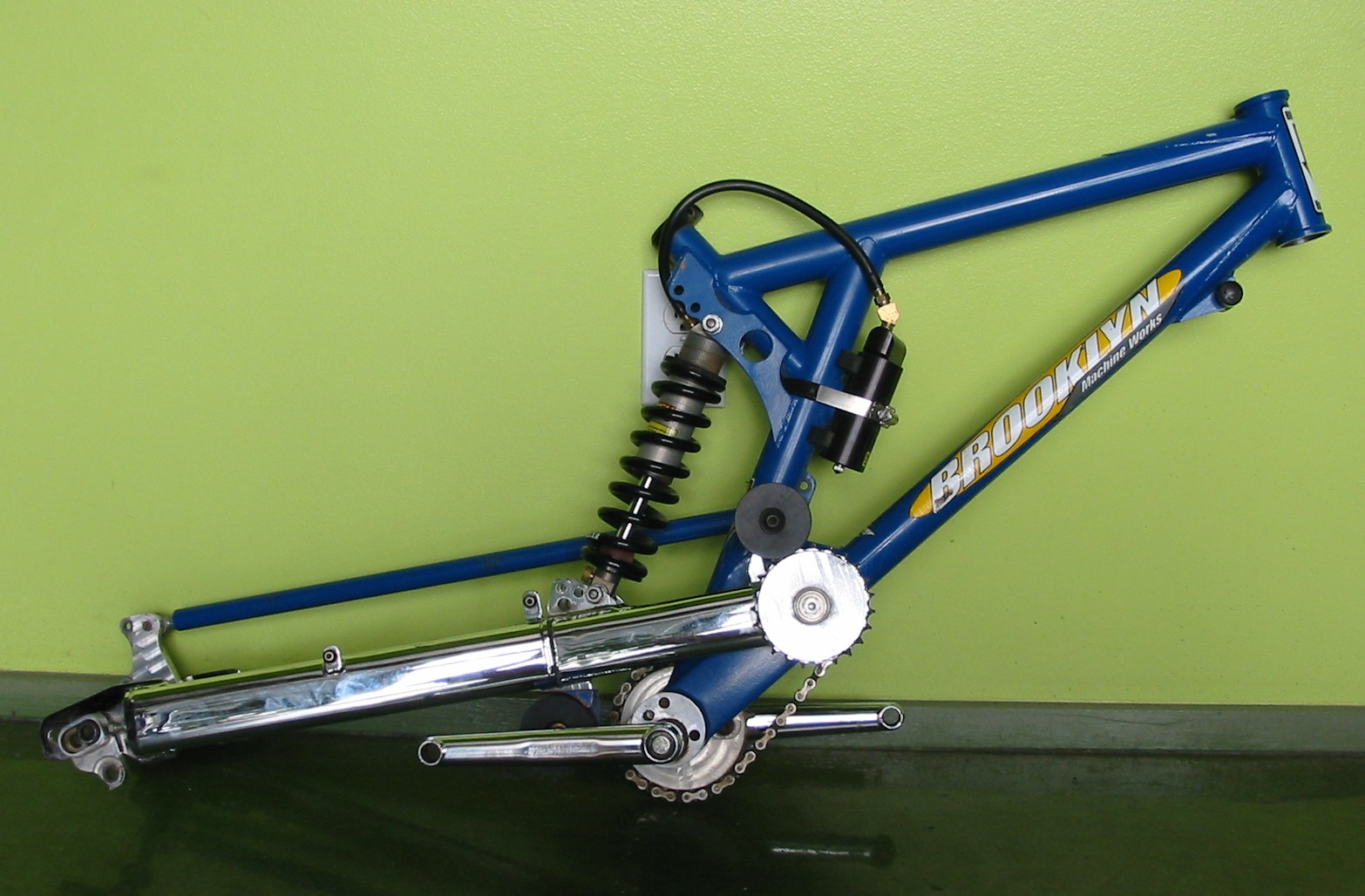 Frame as purchased. Not in bad shape for it’s age. Original inception date: 1999.

The TMX was a bike whose appeal for me transcended numbers on paper, or good sense, for that matter. When I bought it, the frame was already 5 years old, with appropriately dated geometry (relatively steep and high), and was beastly heavy. The frameset (with jackshaft, cranks, beefy Avalanche shock, floater, and associated bits) was about 22lbs. Still, I thought it had potential to be a fun big hit play bike. Or at least an entertaining build. 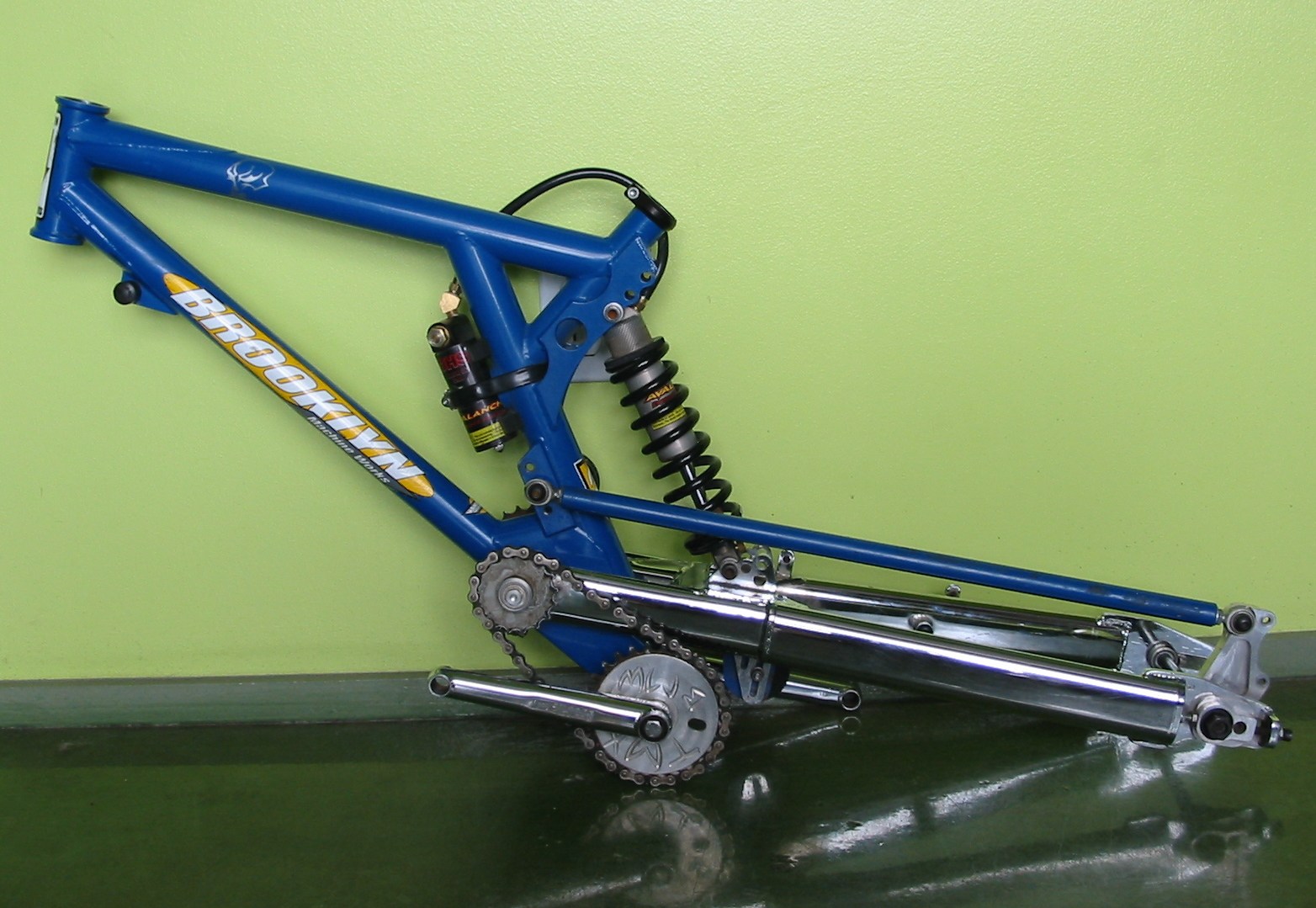 Lots of metal here. Every part built with an industrial ruggedness not typically seen in the bike industry.

I was inspired by a couple fully chromed Brooklyns I’d seen previously (namely TMX #001, piloted by OG BMW alumni Terry Seeberg), so immediately proceeded to strip the painted parts and send them off to the plater. 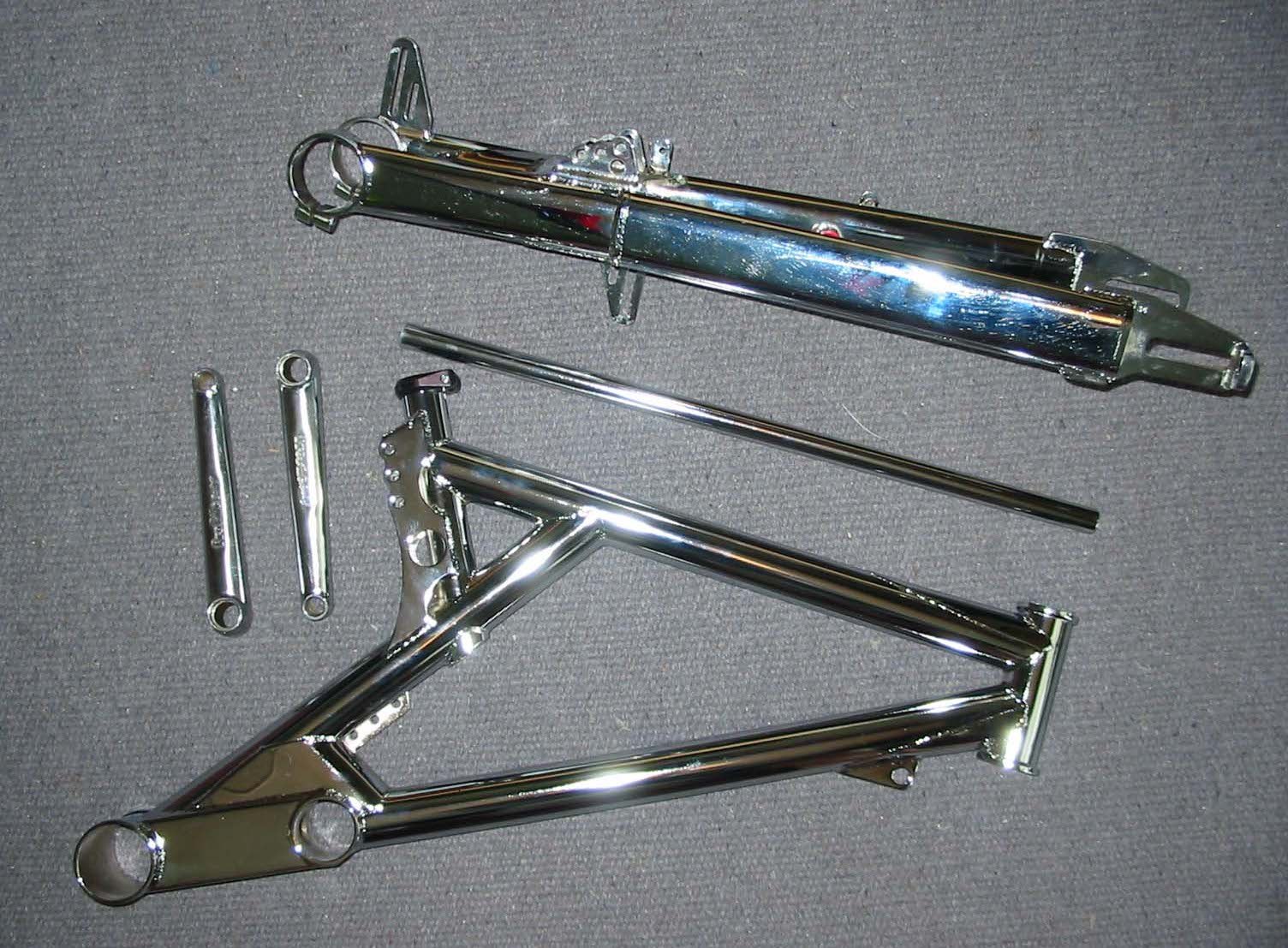 I built the bike with the mindset of shedding as much extraneous mass as possible without compromising it’s robust character. The bike went through a couple iterations, but the final build, with a Ti coiled 5th Element instead of the stock Avalanche remote piggyback shock, and over 40 ti bolts scattered about, was 47lbs – the lightest TMX I’ve ever seen. Not that anyone had ever been motivated to embark upon such a futile endeavour. But not bad considering typical builds were pushing 60lbs (i.e., with Monster-T’s, Doublewide rims, 3.0 Gazzolodis, etc). 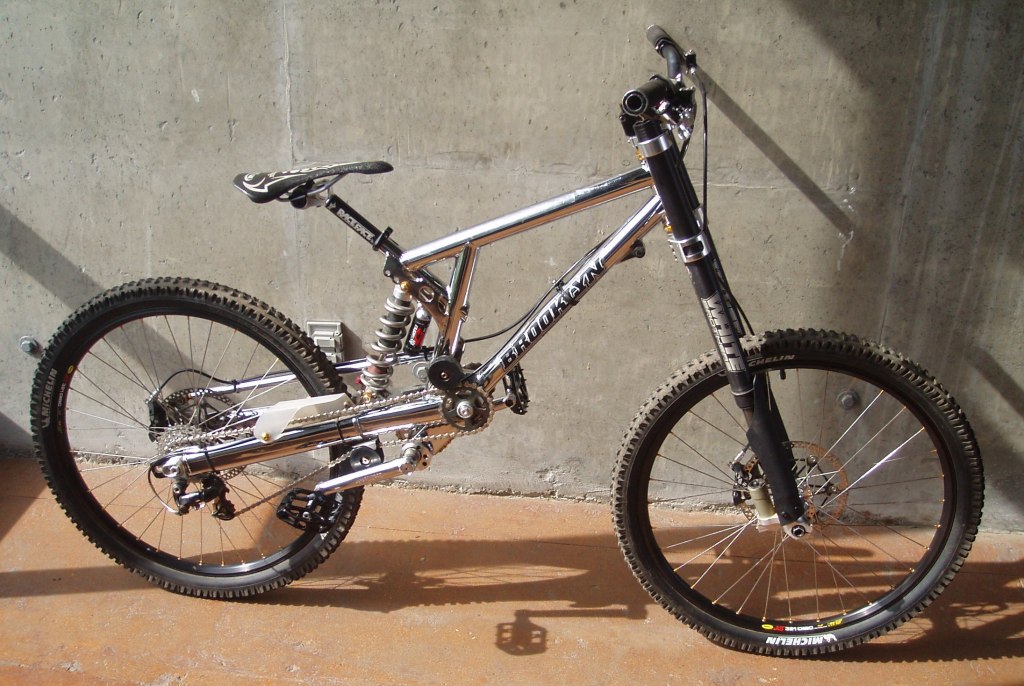 Final light(er) build. Actually looked relatively lithe. Until you picked it up.

So how did the bike ride? The jackshaft was a fairy radical but effective way of dealing with drivetrain interaction on a high pivot suspension design. That, in conjunction with the floating brake made for a well planted, neutral handling chassis. In a word, solid. Unlike anything I’ve ridden. Steel does have a unique ride quality, whether it’s partially attributable to the lack of resonance (this was a very quiet bike) I’m not certain, but there was a feeling of well damped solidity – no doubt owing in part to the sheer mass of metal. It wasn’t an optimum high speed dh machine owing to the vintage geometry, but multiple shock mount locations in conjunction with a shorter shock, and an eccentric bottom bracket, allowed tweaking the geometry into acceptable territory. Made for a fun park play bike. 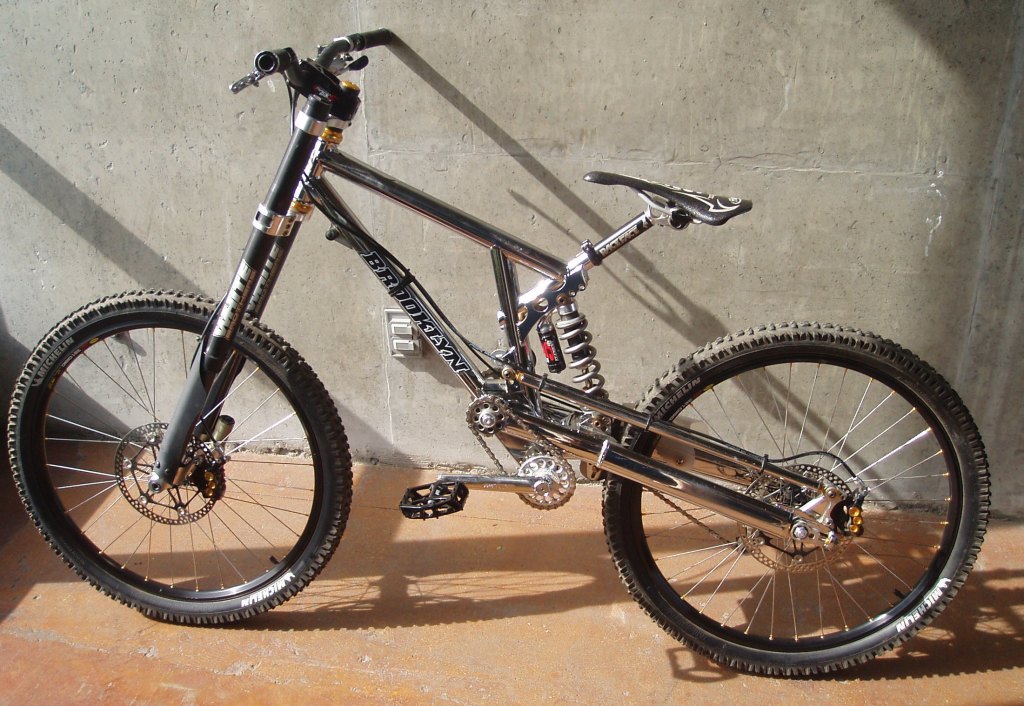 B side. Can’t think of anything witty to add here. Oh – check out that stem length; when 70mm was de rigeur. 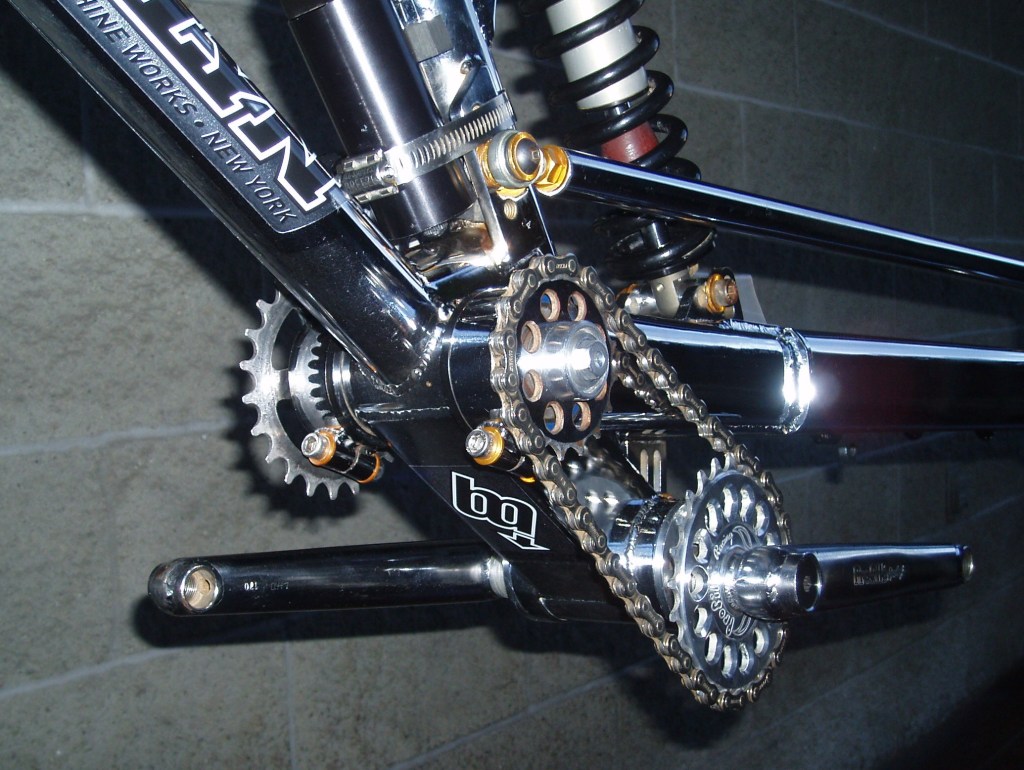 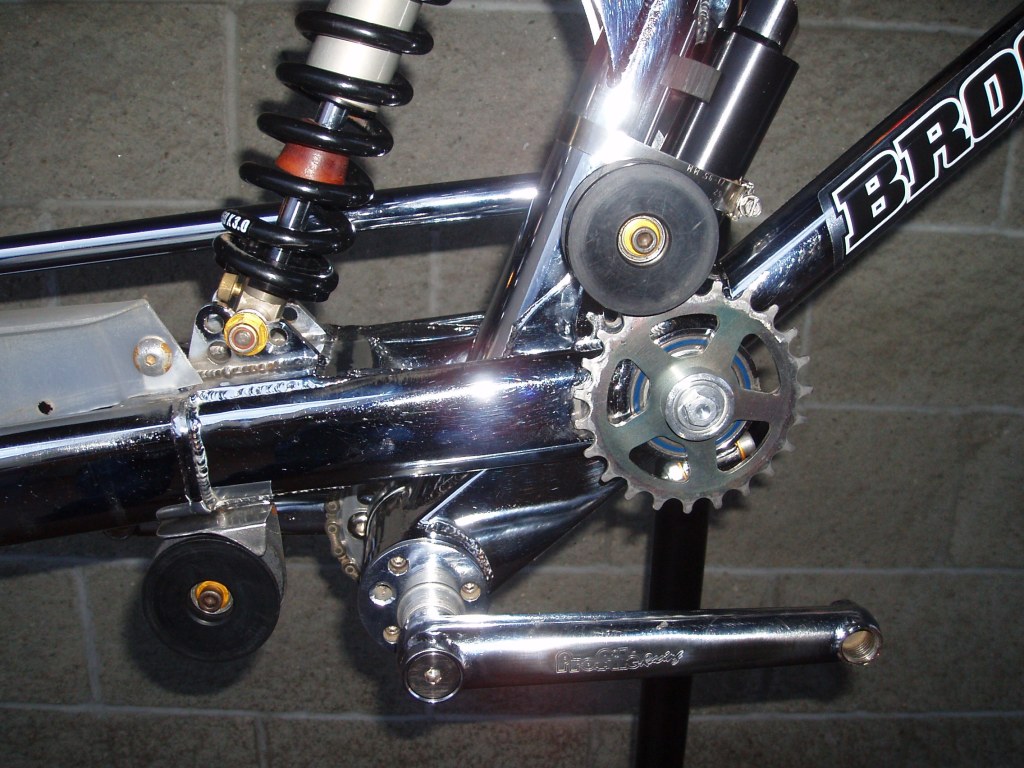 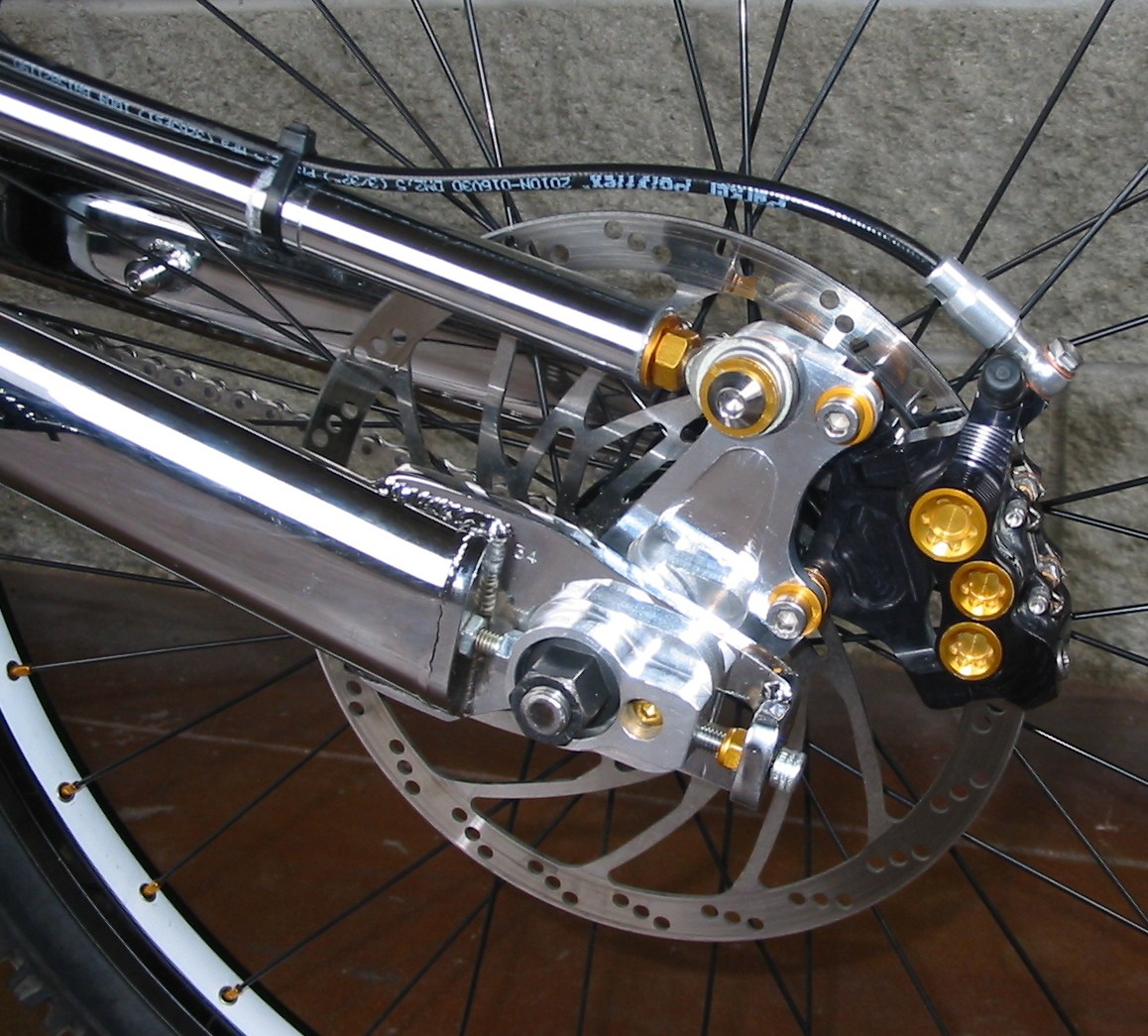 Getting a bit neurotic with the polishing and anodized hardware. Pre-family when I had time for such things. The Hope Mono 6ti brakes were trick, expensive, and even worked well – most of the time. The adjustable sliding dropout detail is appropriately robust. Spot the serial number? Low production, these things. 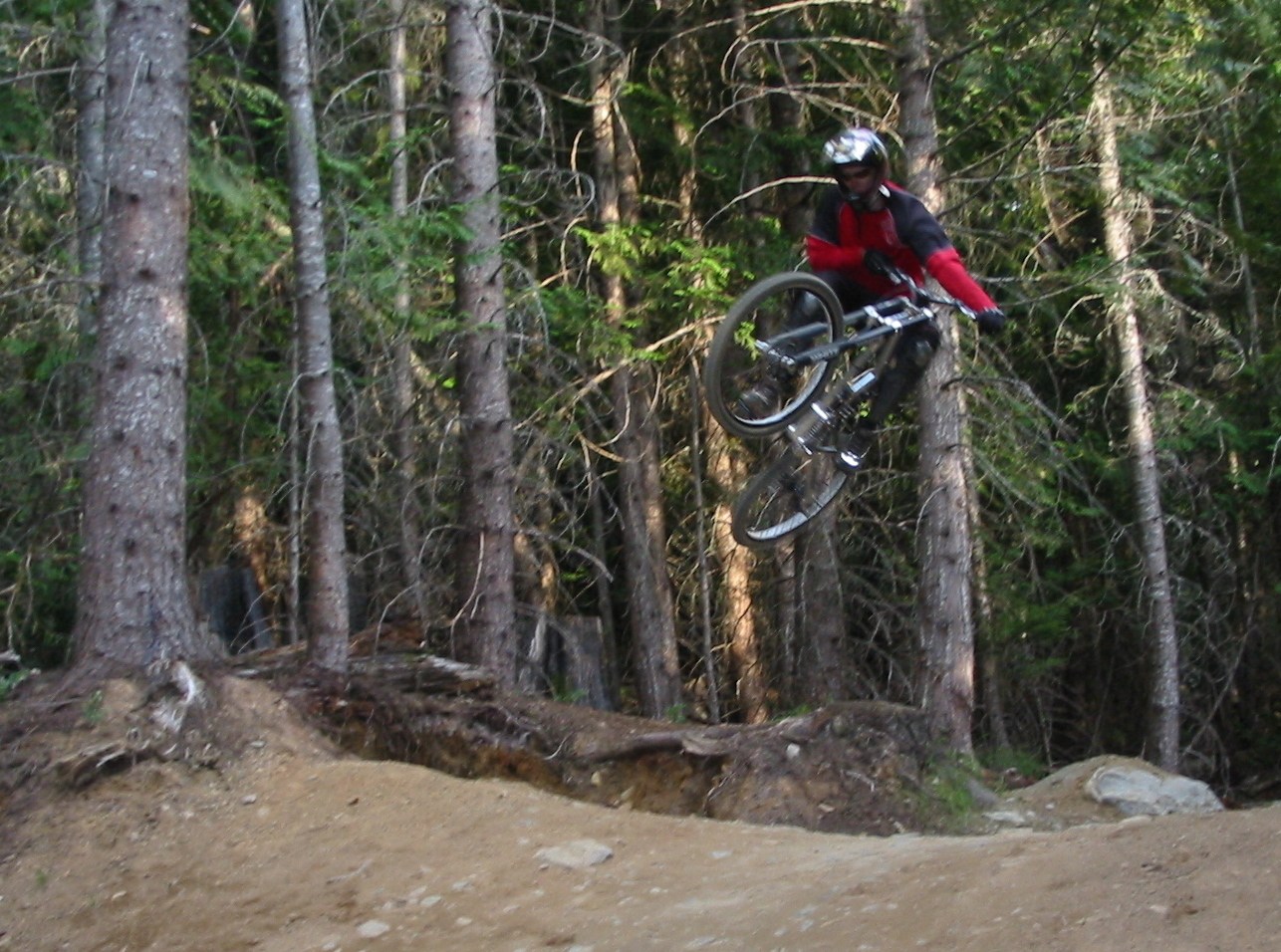 Artistically blurred action shot. Proof that it was possible to heft this bike off the ground – with enough speed. 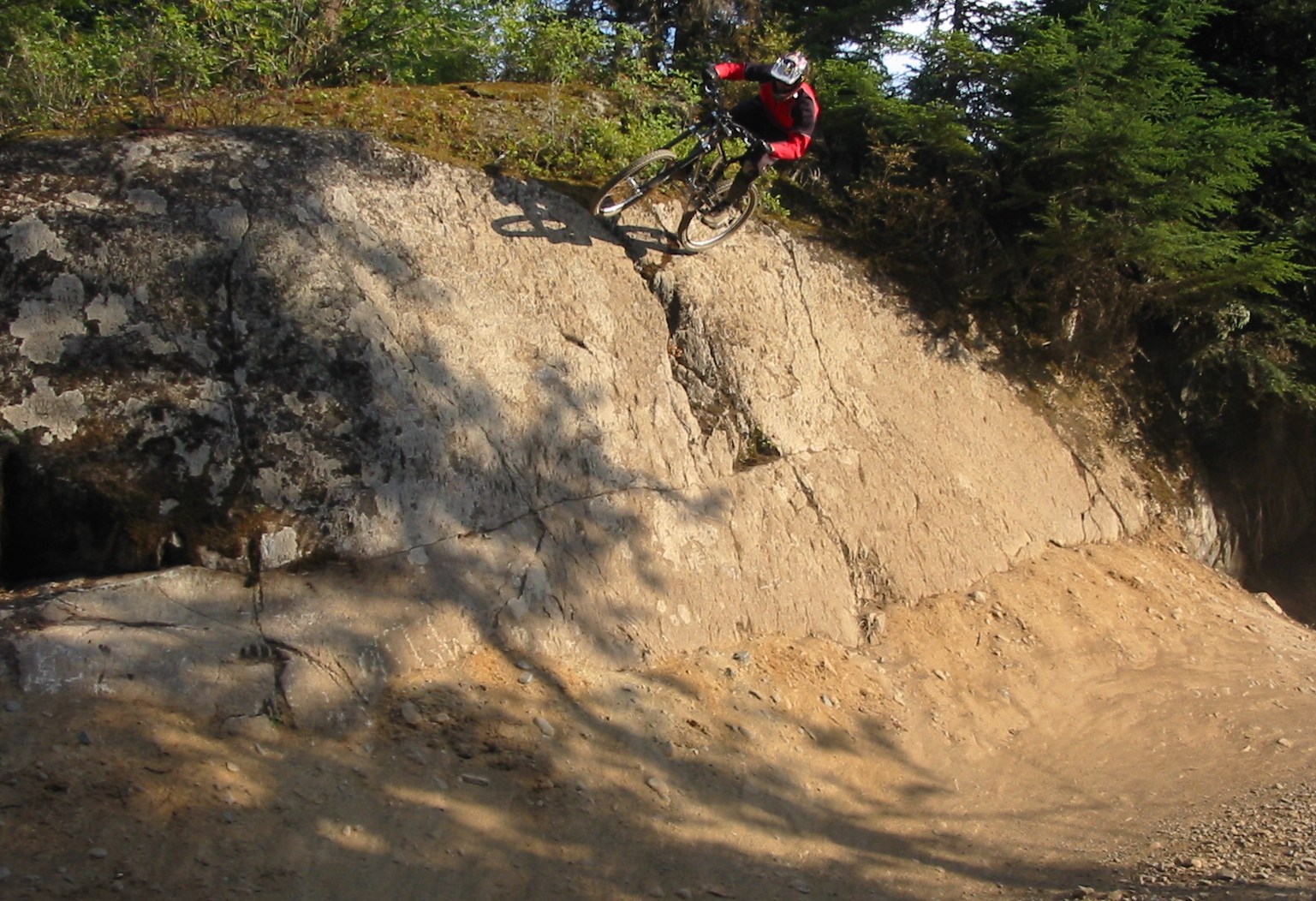 More Whistler fun. I actually used to ride this a fair bit on the shore, though exclusively in shuttle mode. No climbing on this bike.

So I eventually ended up selling the frame (for a surprisingly good bit of cash) to fund a modern bike. In retrospect, I should have retired it as a wall hanger. C’est la vie. A fairly ridiculous bike, yet one of my favourites. Oddly enough (or perhaps not), some of my most fondly memorable bikes have have possessed what many would consider significant flaws – that were overridden by endearing character. In these days of nearly homogeneously good bikes, there are few surprises to be had; the olden days of dodgy experimentalism are probably best left behind, but I sometimes miss the mad science projects. I wouldn’t have any use for a bike like this these days, but this was certainly a fun chapter in my bike ownership history. 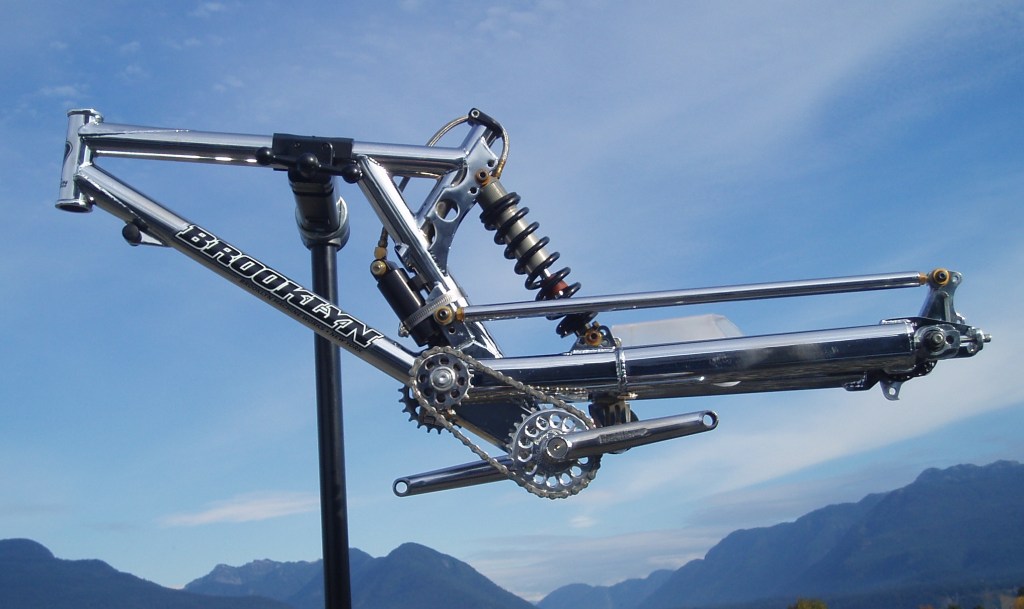 Prior to shipping it off to it’s next owner. Au reviour!

Has anyone else professed logic defying love for a quirky bike with character?

Nice. I sold that bike to big Ty back at the old airbomb.com / sports link direct days. Don't think he ever rode it. Always wondering where it ended up. Glad to see it got ridden.

super cool! did you buy it new? i bought it off a guy in squamish; can't recall his name. i sold it to a guy out east; haven't heard word of it since.

Worked for a shop in Tsawassen and ordered it from Brooklyn directly. Guy had it basically as a show piece. But the serial number matches! Beautiful machine.

I know this is old but Too Funny. I was showing a co worker what a brooklyn TMX was and bam my old bike pops up. Should have kept this one hanging in my office. but glad it got some use

so cool! wish i had held onto this one as well. sold it to a guy out east; never to be seen again.

Funny I was just on a Facebook page and bam picture of a guy with #34 TMX in Italy. This frame has been a world traveler

It seems as if all the wonderful, weird and absurdly beautiful bikes have been in Perry's quiver at one point or another. He's wearing sunglasses in those pics to cut reflection off the frame. We used to have to do the same.

Maybe time for a repost of the Lahar article?

I believe that mount was for fork bumpers, on the downtube. Great article. Cheers.

that thing is a work of art! i love these kinds of posts!

Love articles like this! Good write up on an absolutely classic bike!

Nicely written article. I appreciate the insight into your fondness for the frame.

What was the mount on the upper end of the underside of the downtube for?

i'm thinking it's a fork bumper

Fork bumpers. Should have left the Avalanche shock on. Had a TMX and later a LInk both with Avy's. Hands down the best dampening of any bike I've ever ridden and quietest two bikes I have ever owned. The TMX scared the living shit out of every person who rode it for the first time. Once that thing was up to speed the momentum you could carry was terrifying.