Back in 1999 I rode a Balfa BB7 for the first time. It was crude, heavy, astonishingly grotesque, and absurdly weird looking, but at the time I kinda liked it. Most bikes on the market were flimsy, rickety and were seemingly engineered by prepubescent children in art class. At the time I owned the infamous, yet ironically coveted, green Norco VPS-1. It was the poster child for under-designing a bike frame. The Balfa BB7 was also a big ugly tank. But within that industrial behemoth lay the DNA of a race bike. It pedaled well thanks to the high mounted idler pulley – if you could get past the frame’s heft. This is 1999 bicycle technology I’m writing about here. Let’s not get carried away. 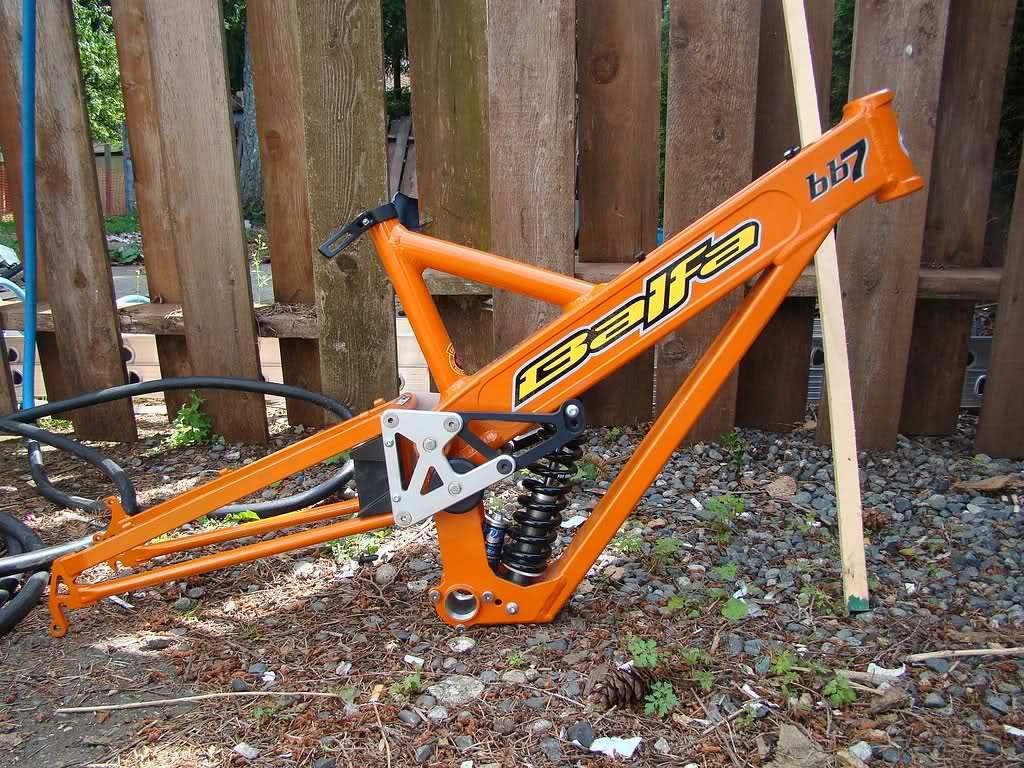 What happens when you aren’t really into downhill bikes anymore, but you find a new old stock Balfa BB7 on Craigslist? You buy it of course. This would be my fourth BB7. What can I say – I have a soft spot for French Canadian bikes.

In 2000 I found myself riding one of my own. Compared to the previous model year, the ’00 was a true downhill race bike. The weight rode low due to its super compact frame, making it feel lower than it actually was. The rearward axle path, due to the high single pivot placement, meant that the bike just wanted to go faster over small bumps. Plus, with the good pedaling nature of the idler pulley, you could put down power through the rough. Not a lot of bikes in this era could do that so well.

Back in those days it was common to find most people trying to make their bikes heavier to handle drops to flat, as well as making their bar height run into the nipple range. I was odd. I had my BB7 race bike running at 42lbs with no headset spacers, low rise bar, XC cranks, carbon post, lighter wheels and smaller tires. Low forties was a light downhill bike fifteen years ago. 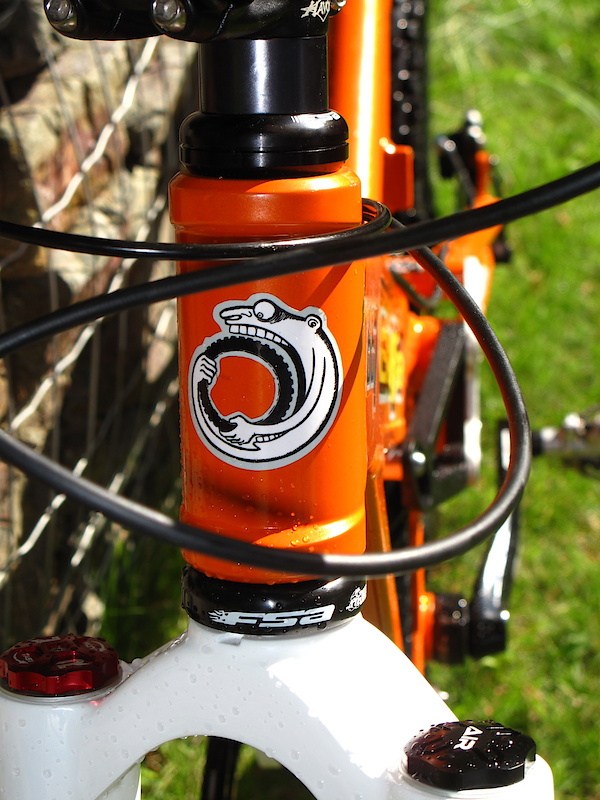 The Balfa man-eating-wheel logo adorning the BB7’s unusually thick head tube. Balfa designers thought well before most bike brands that a short head tube was vital for a lower centre of gravity and thus better handling.

In 2001 I got on the Balfa squad and into my second BB7. This one was a beautiful beast with orange metal flake paint. It had some drastic changes from the ’00 model that made it racier – but with more travel and slacker angles. The ’01 had some issues with the linkage plates and idler pulley exploding on larger impacts, but overall the BB7 was headed in the right direction.

The 2002 model was sweet and much ahead of its time. Long, low, and slack. It was the accumulation of what Balfa’s designers had set out to do from the start: make a true Canadian-made, World Cup level race steed. The ’02 was number three for me and I couldn’t be happier. Out of the box it came with an XTR drivetrain, a BoXXer Team fork, and a smattering of thoughtful bits & pieces. 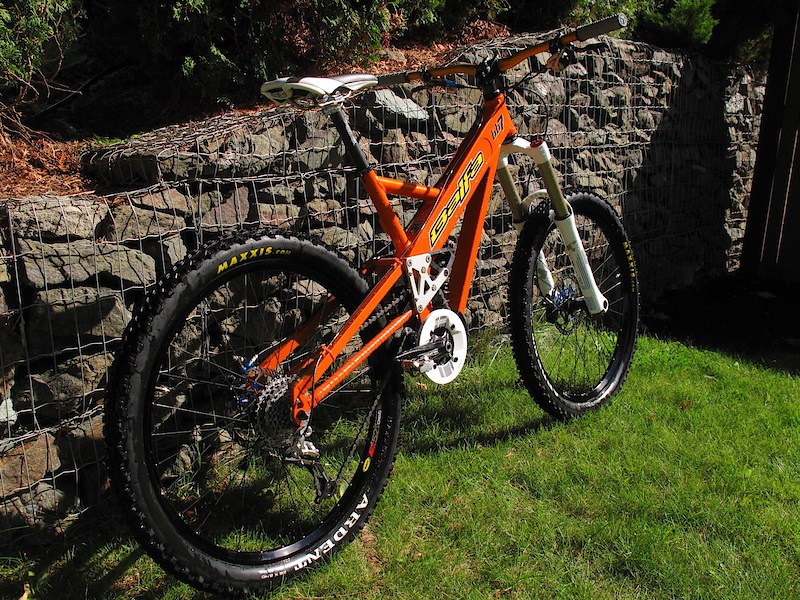 A collection of parts taken directly from my Giant Reign 0 trail bike with the exception of a heavier crankset and bash guard. BB7s required extra chain length because of the upper pulley placement. The bottom chain guide roller had to be positioned awkwardly high near the swingarm or the bike just didn’t feel right.

Fast forward to 2010. I wasn’t really looking for a downhill frame, but thanks to Pinkbike’s buy and sell, I found a new old stock 2003 Balfa BB7. That’s right – never used, never built. I couldn’t pass it up. Even just for old time’s sake or just to hang it on the wall – I had to have it. Then I thought, why not build it up using modern parts? The frame had (by 2010 standards) modern day angles, nine inches of travel, and one of the better pedaling platforms, even compared to many new bikes.

I started piecing together parts. Some new and some borrowed from my 2010 Giant Reign 0. Yes, you heard that right, I stole some parts from my all mountain bike to build up a “mini DH” bike of sorts for ripping some smooth Kamloops’ trails. I wanted a bike to pedal flat sections on, but also to hammer through the chunder… and do it all day. 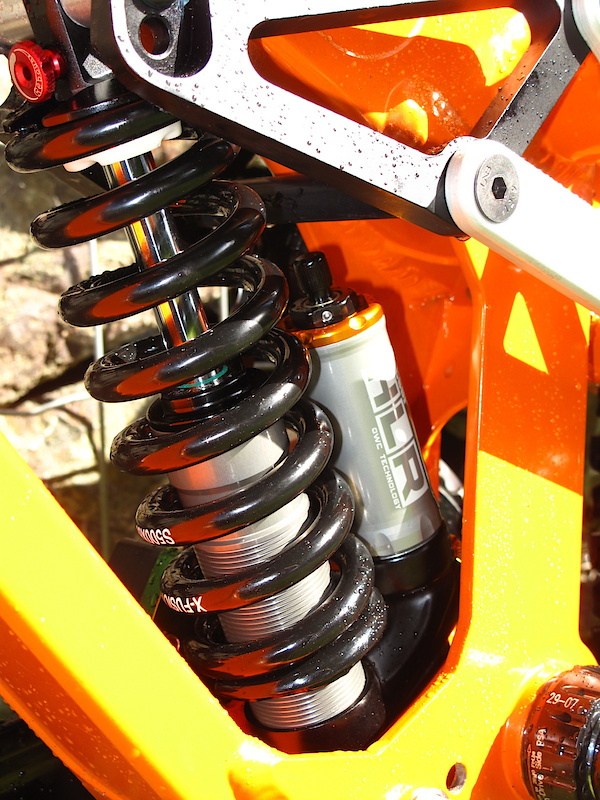 At the time I had the opportunity to test out X Fusion’s 160mm Vengeance fork and their Vector HLR coil over shock. In a moment of nostalgic hysteria, I unbolted the parts from my 2010 Giant Reign 0 – a 150mm travel All Mountain bike, and mounted them straight onto the BB7 frame. The parts included such things as a lightweight Mavic 521 wheel set, Avid Elixir carbon brakes and Raceface Atlas cranks. Fine kit on a trail bike, but a downhill frame? 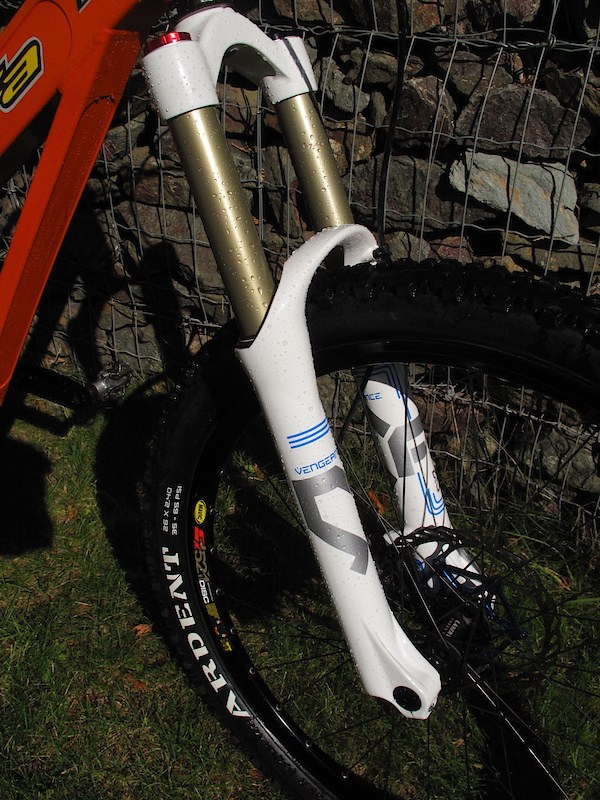 The 2010 X Fusion Vengeance was a stout 20mm axle fork with 160mm of travel. Brian from Renegade Cycle Solutions let me demo the fork for the race, but I liked it so much I decided to buy it. The Vengeance had a full adjustment range and all aluminum internals, similar to that of a top tier motocross fork. It surprisingly didn’t feel too under-gunned on the nine inch travel BB7.

I decided to run a 2.4 Maxxis Ardent single ply tire up front and a dual ply Ardent in the rear, both set up tubeless. All said and done, my new Balfa BB7 came in at just about 37lbs. Given the mass of the frame I’d call that a featherweight. 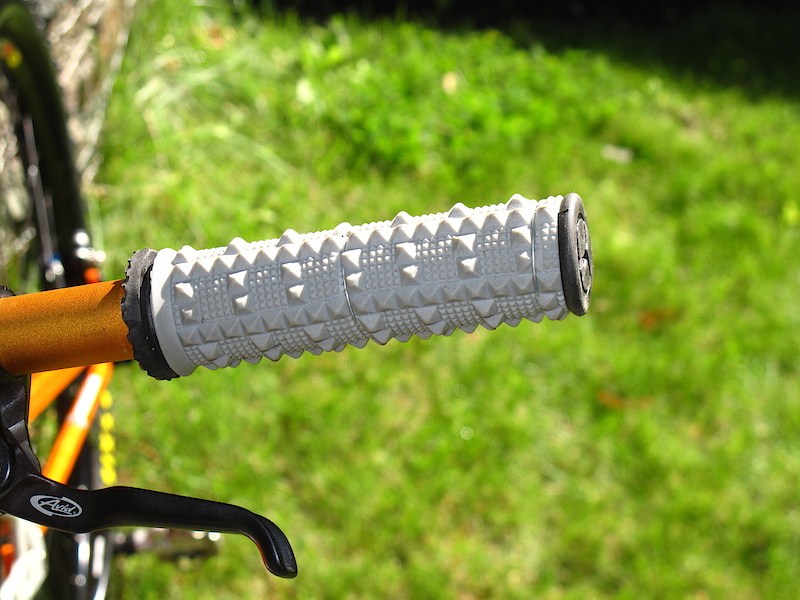 At the time I was heavily into dirtbike racing and these Tag Metals Rebound grips were my go-to. They were ultra soft and easily gripped, thus allowing me to ride for hours without getting blisters. I put a pair on the Balfa in order to allow my hands to better survive an all day downhill race. Cut flanges, glued, and wired.

I am always one for obsessing compulsively over the fit and feel of my bikes, and this build was no different. I also wanted some comfort for all day rippers in the bike park. During this time I used Tag Metals Rebound grips on my motorbike. They were the only grips that I could ride for four to five hours without getting blisters, yet were grippy enough to hold a little looser to reduce hand fatigue. Nowadays there are many choices so I don’t have to resort to gluing grips!

I found some titanium bolts and nuts to help lighten up my 10lb (sans shock) frame. Although the bolts are huge, there isn’t much weight saving going on here, but the bling factor may have been worth it. 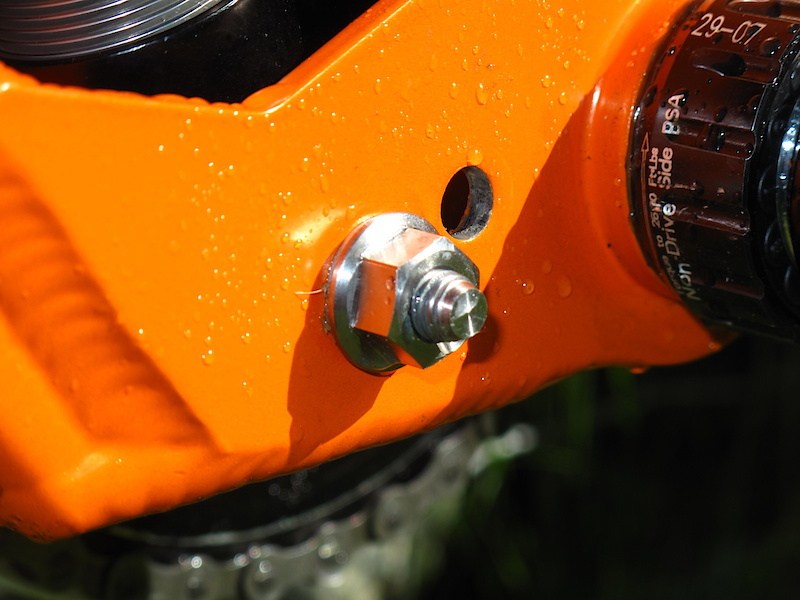 I found a resource for titanium hardware to replace the stock steel units. It didn’t shave much weight but to hell with it – it was Ti!

My first test ride was at the Sun Peaks bike park. I started with the shock’s high and low speed damping backed all the way off to give me a baseline. What I found was a very supple first few inches of travel. I played around with a few clicks of low and high speed compression to give a comparison. I ended up backing the adjusters off because the shock’s sensitivity was amazing. Combined with how well the BB7 pedaled, it was to this day one of the better feeling bikes I have thrown a leg over. 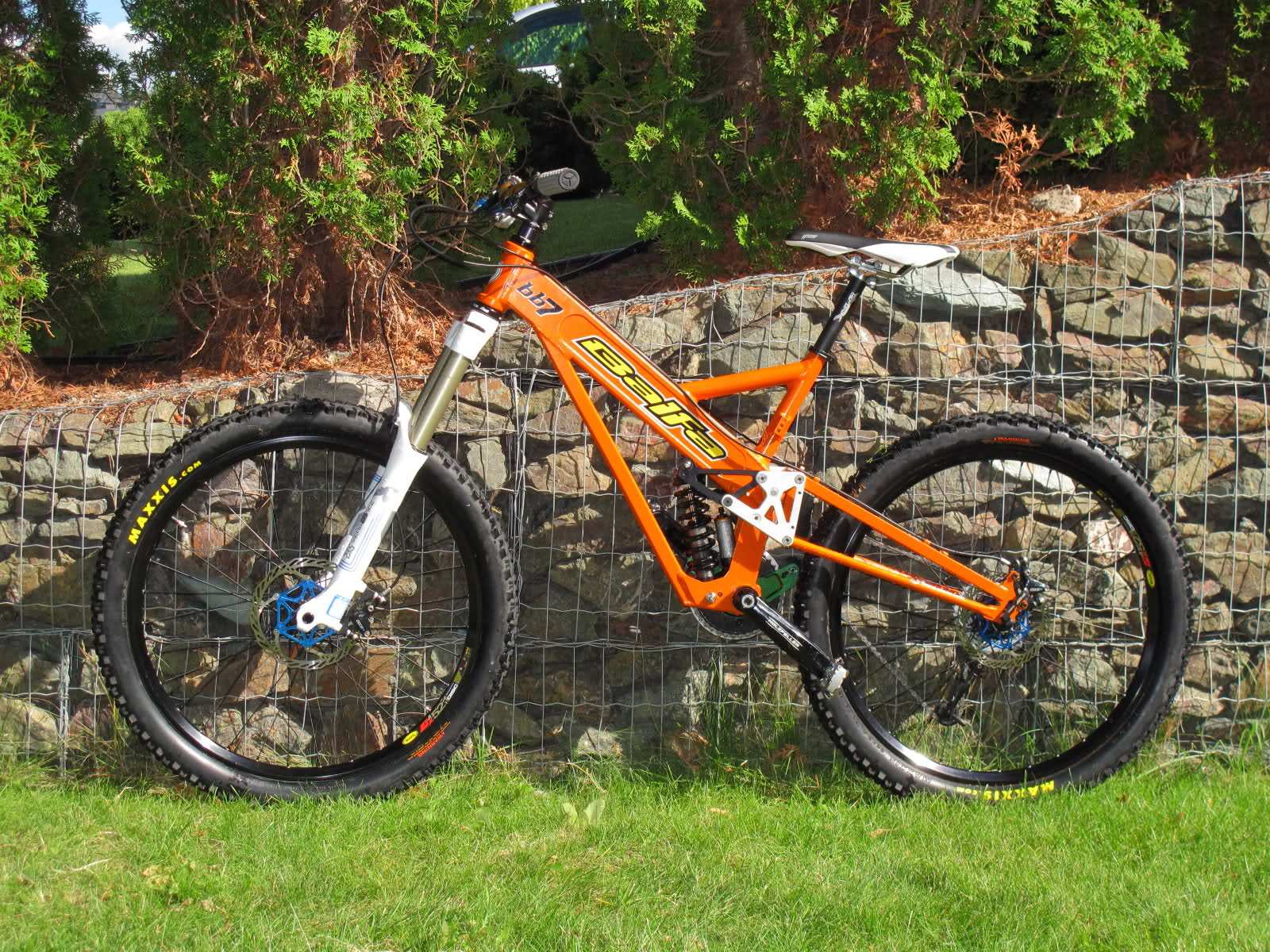 All built up with trail bike parts, ready to shred. Fast rolling Maxxis Ardents, XC pedals, and light wheels. While most bikes of that era were tall, steep, and awkward, the 2003 Balfa BB7 was slack, low, and long. Pictured here it weighed 37lbs. Not bad considering the frame and shock weighed almost 12lbs alone.

My purchase decision wasn’t only based on nostalgia; I had my sights set on a one day race at Sun Peaks. The resort, in 2010, was hosting a ‘King of the Mountain’ ironman downhill event. The premise behind the race was to see how many laps you could get in six hours. Right up my alley. I was that guy who always wanted to ride the bike park from opening to close without a break. I was pumped on the race happening, but unfortunately it didn’t. I guess there aren’t too many people interested in suffering for that long.

Thankfully I got a bike out of the deal.

We’re suckers for quirky vintage bikes here at NSMB. Send us an email if you have a bike you’d like to share.

Nice to see Balfa reappearing in media in 2014 🙂 Everyone interested about this brand, feel invited to my webiste:

I can't see your web adress. If you can mail it to me (mike.vicent@gmail.com) I'll be very pleased
I am interested in a Balfa BB7 too
Thanks a lot

Never rode one but I always coveted one.

and the guys at balfa uk for suspension upgrades

Always wanted to make some new linkage plates for one to shorten stays a touch, lower BB, and slacken it a tad. Got a Zerode instead, but always would love to get an old BB7 and do these easy mods. I owned three or four of them back in the day, sick bikes.

Sweet! I did a half assed re-build on my 2002 Banshee Scream this summer. Even though it still has the old suspension it's still made it more fun to ride with some new wheels and a few new components. I haven't looked that hard for a single crown fork since I thought it'd
be hard to get something that big with an 1 1/8″ steerer. What travel fork was the Balfa designed for?

My boyfriend had one (he was on the racing team) and sold it. I bought it back for him one christmas. It's his nostalgia bike, he'll never sell it again.

super cool build! though i never rode one, i loved those old balfas. cool concepts / aesthetics. the jackshaft nr was pretty cool too (though not as pretty).

Awesome looking ride. I really wanted a bb7 when they were around. Looks like a great ride and it will turn heads.

I miss my '02 bb7! serial number 007 too at that, what an awesome, durable, bike. they were really ahead of the game back then!

Sorry for the typos!

Typos? Did we miss some typos? Damn.

Great job on that Wayne!