We were lucky to get some time with Dougie “Fresh” Hatfield at the Santa Cruz booth and have him walk us through Josh’s World Champ’s Bike. Doug has been the lead wrench on the Syndicate Team for a long time and Ratboy was lucky enough to have his experienced hands build up his race bike for Hajfell. Doug was fresh in from from Norway the previous night and had only re-built Josh’s bike that morning before sneaking it onto the stand.

Doug had hung out with Josh in Norway after the race to make sure his rider was being looked after while he had surgery on his foot. As Doug said “Norway is probably one of the best places to injure yourself” since they have some of the best medical care in the world. Josh flew home last Thursday to continue with his recovery. Heal up soon Ratboy! 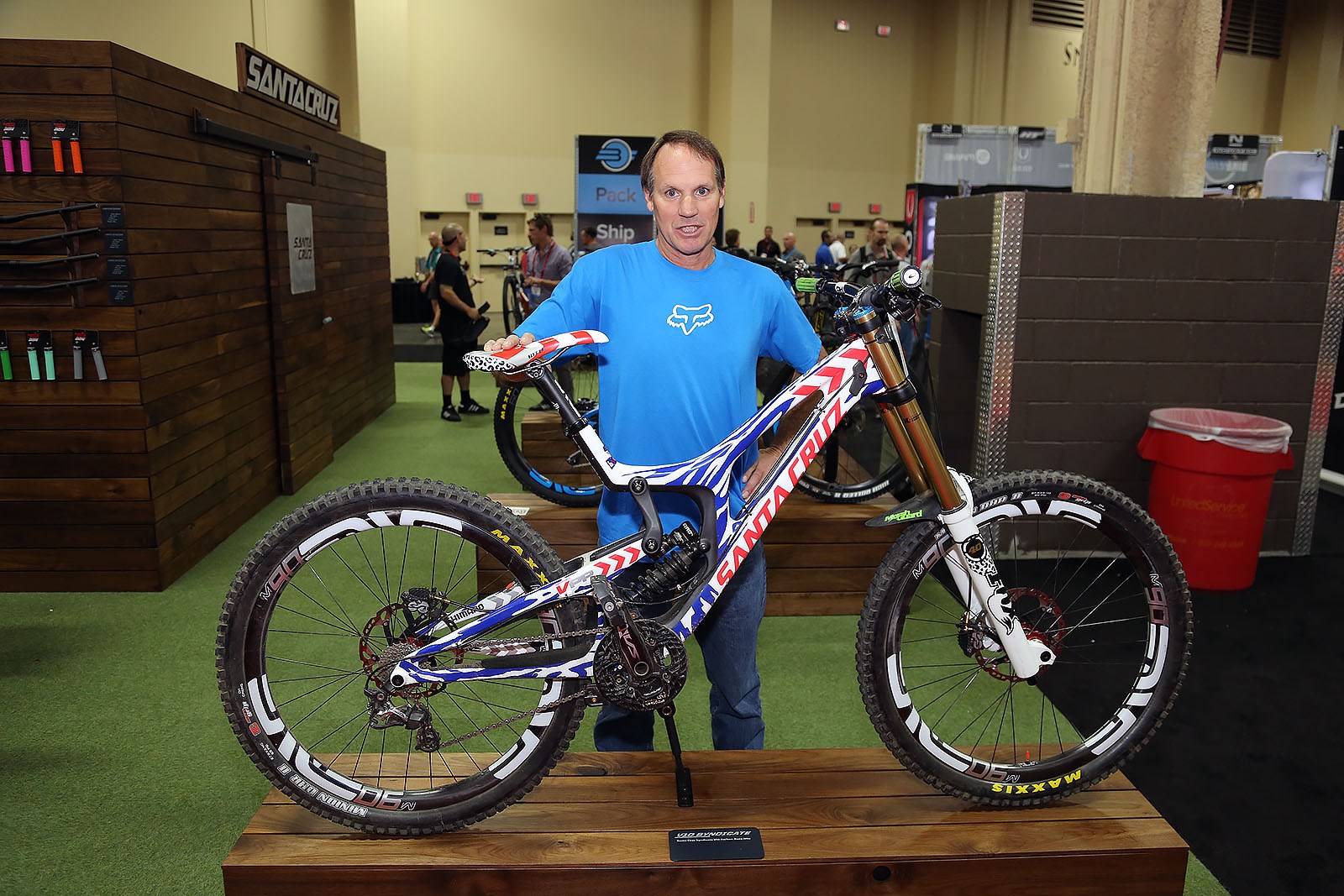 Doug “Fresh” off the plane from Norway with Rayboy’s Santa Cruz V10.6. This bike weighs in heavier than the race version of the V10.5 with the bigger wheels but is still a lithe sub 35lbs. Doug said that the V10.5 had been down to “around 32lbs” race ready so expect the race crew to be aiming for that weight as they get more time with the new version. 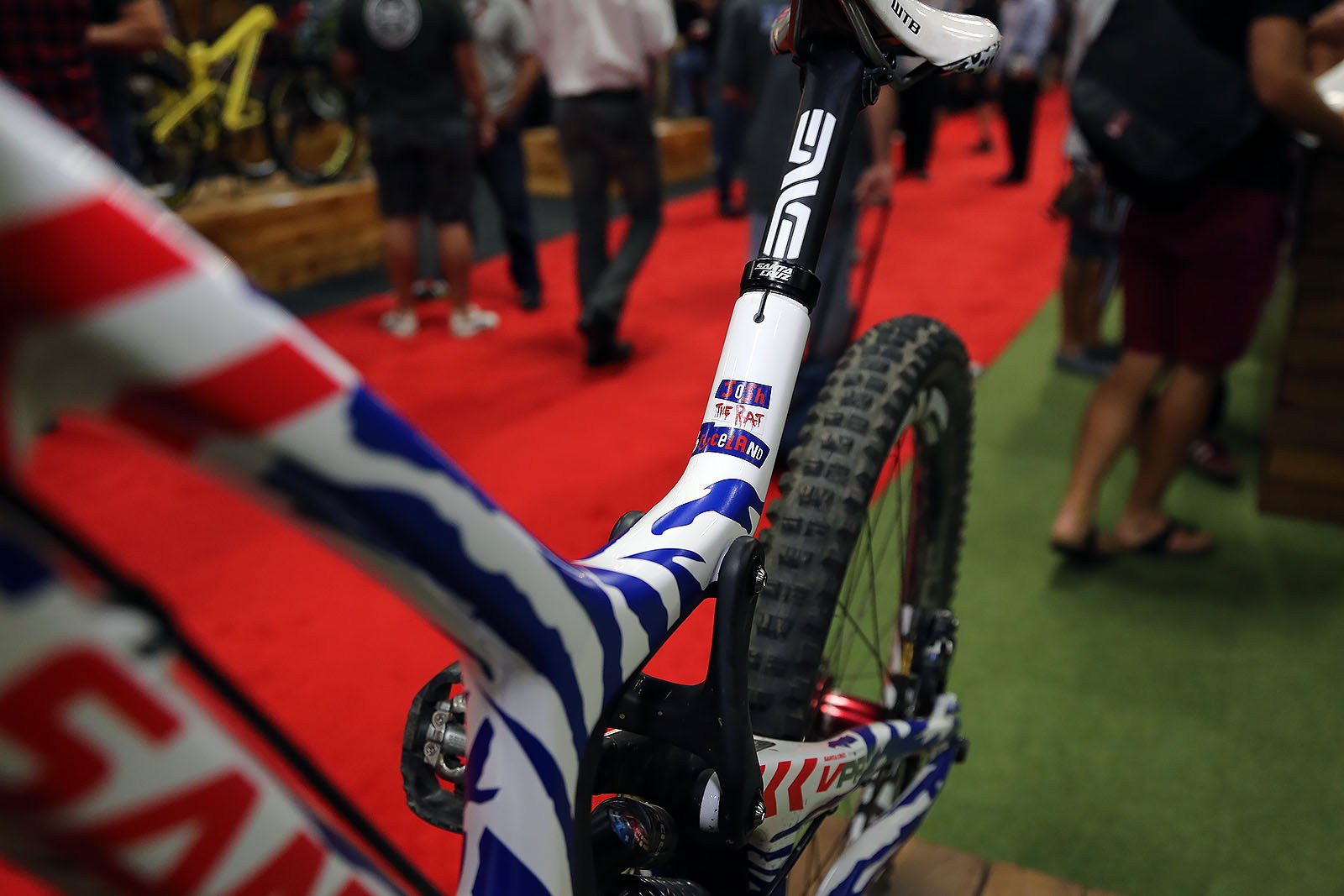 The custom sticker job was done in house at Santa Cruz and was inspired by Josh’s Foxhead kit. Josh had no idea what his bike was going to look like for Worlds and it took Doug almost a whole day to apply the decals, tapping into his arts and crafts skills from high school. 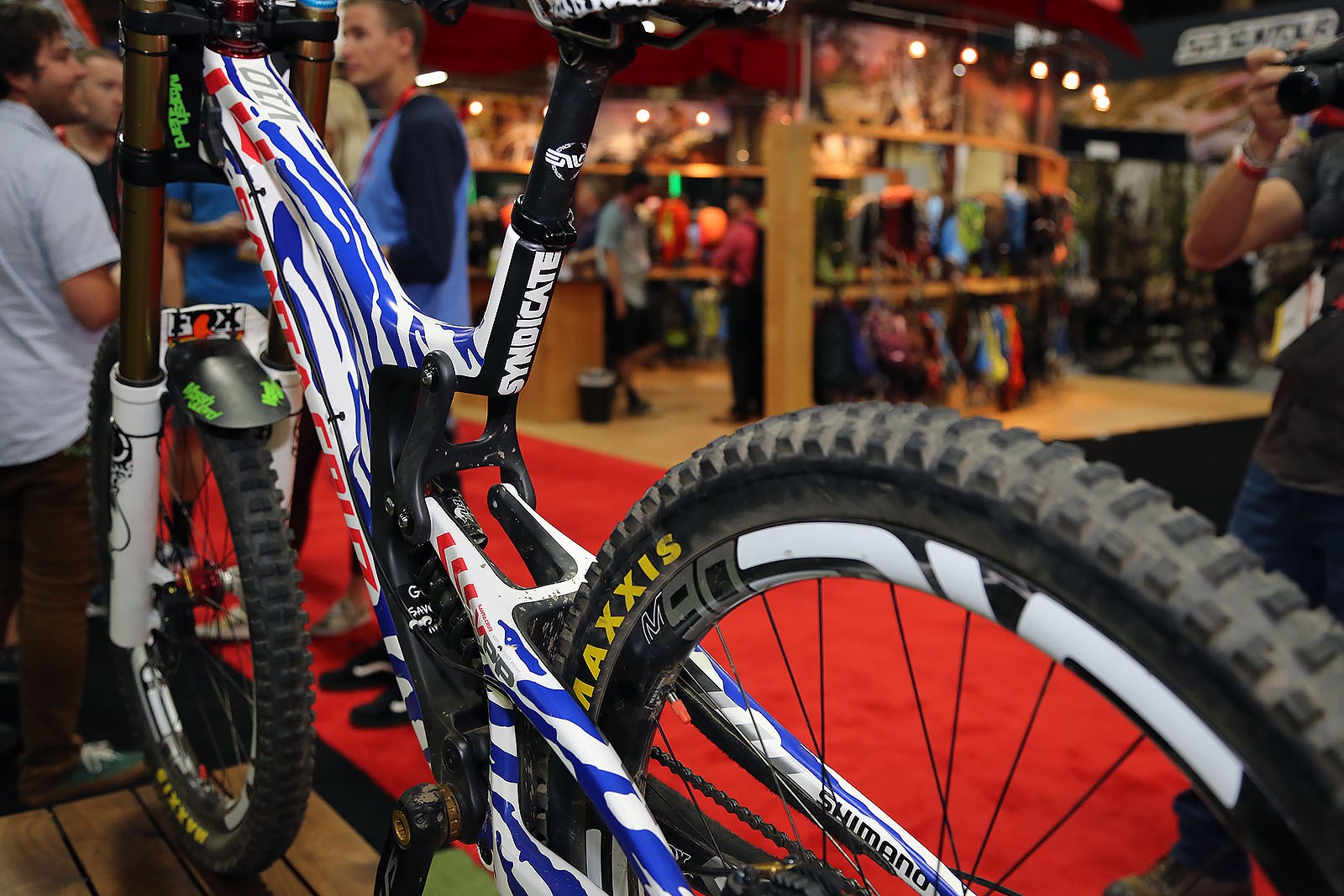 Syndicate sponsor ENVE components supplied the new M90 rims, seat post, stem and bars. There is very little that isn’t carbon on this rig. Josh is riding a large frame with Greg and Peaty on XL frames with the Chris King Buzzworks headset to give an extra 8mm of top tube length. 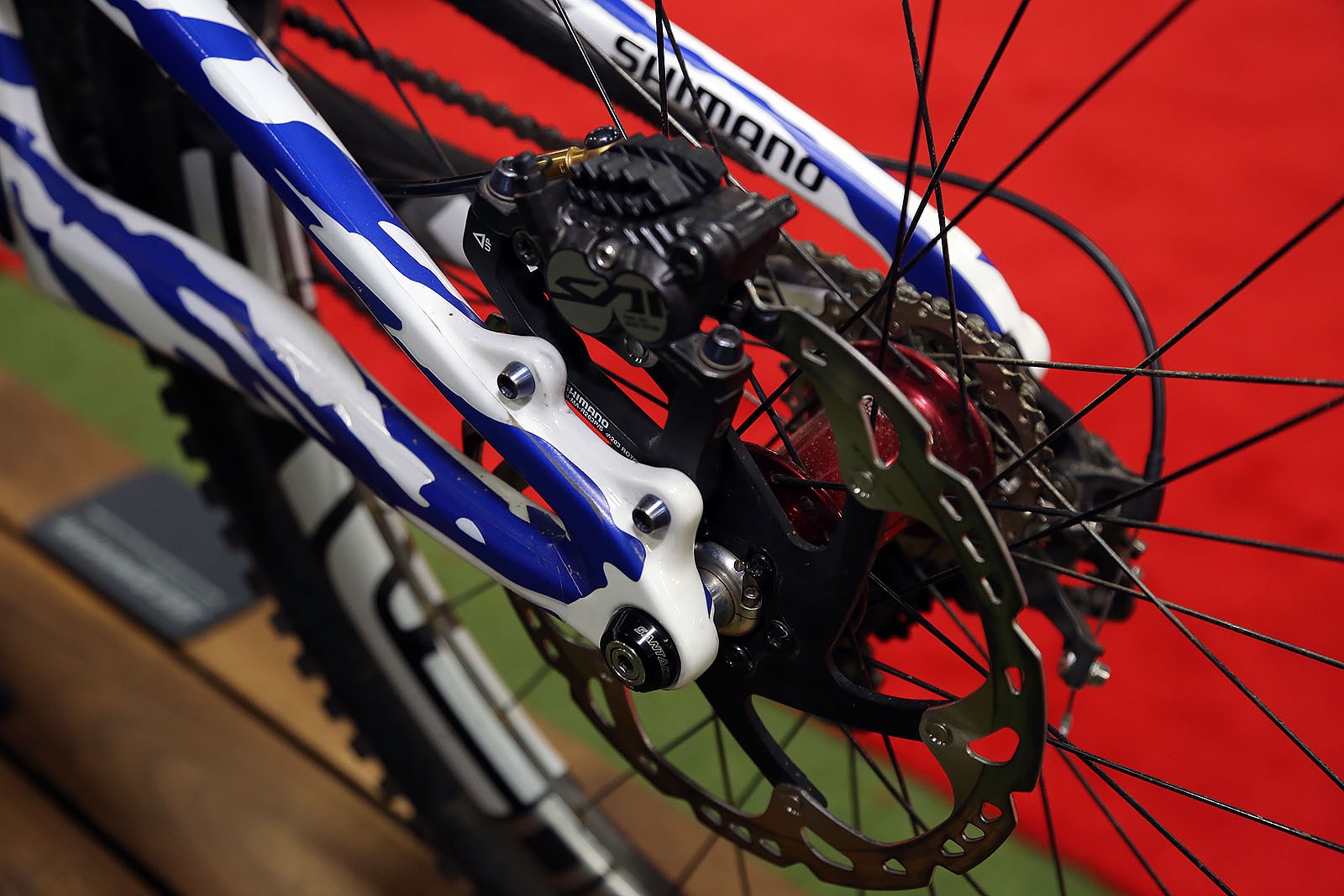 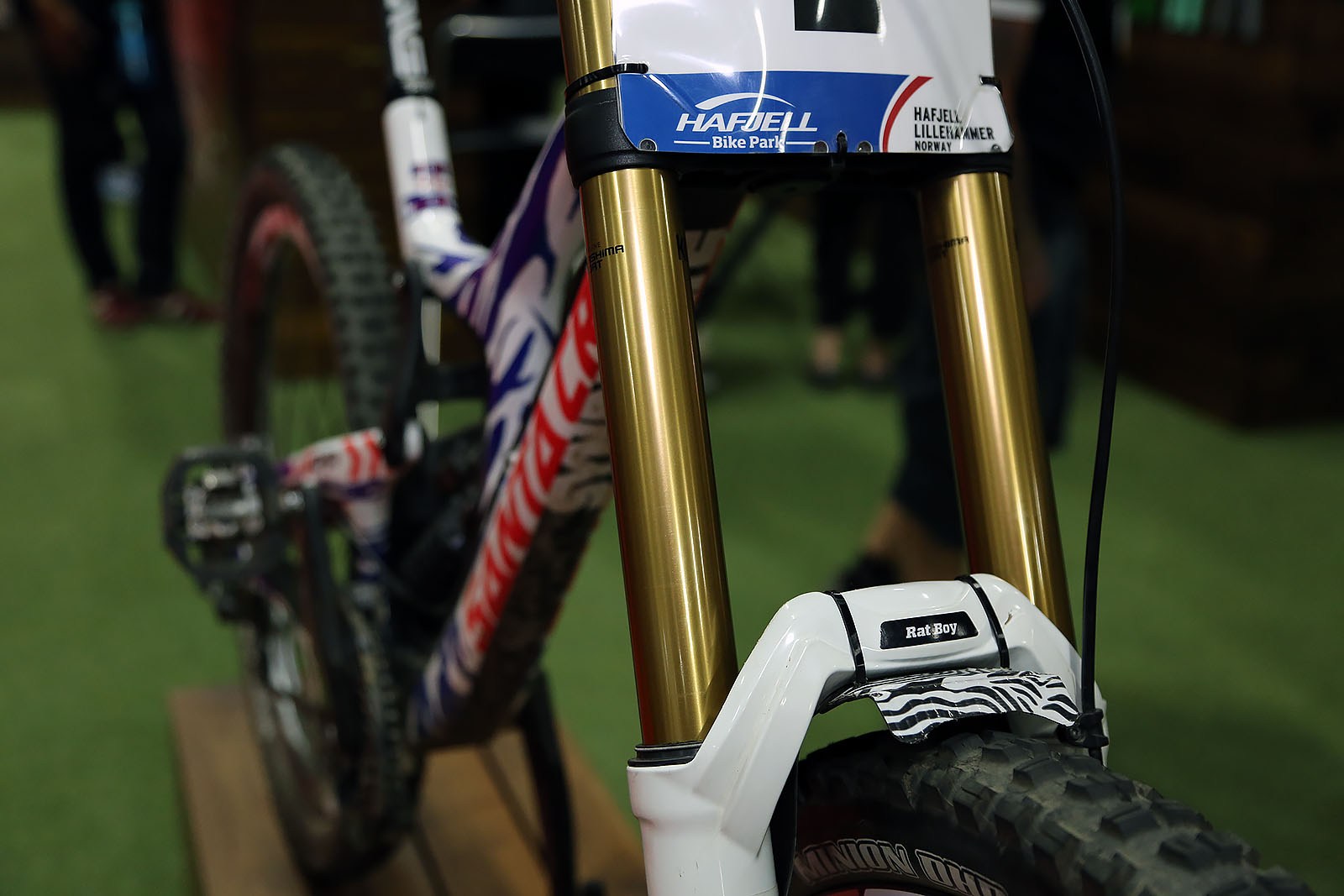 Customization carries over to the front fender too. Doug made sure that we knew that this bike was still a prototype and he was tight-lipped about the new geometry numbers. 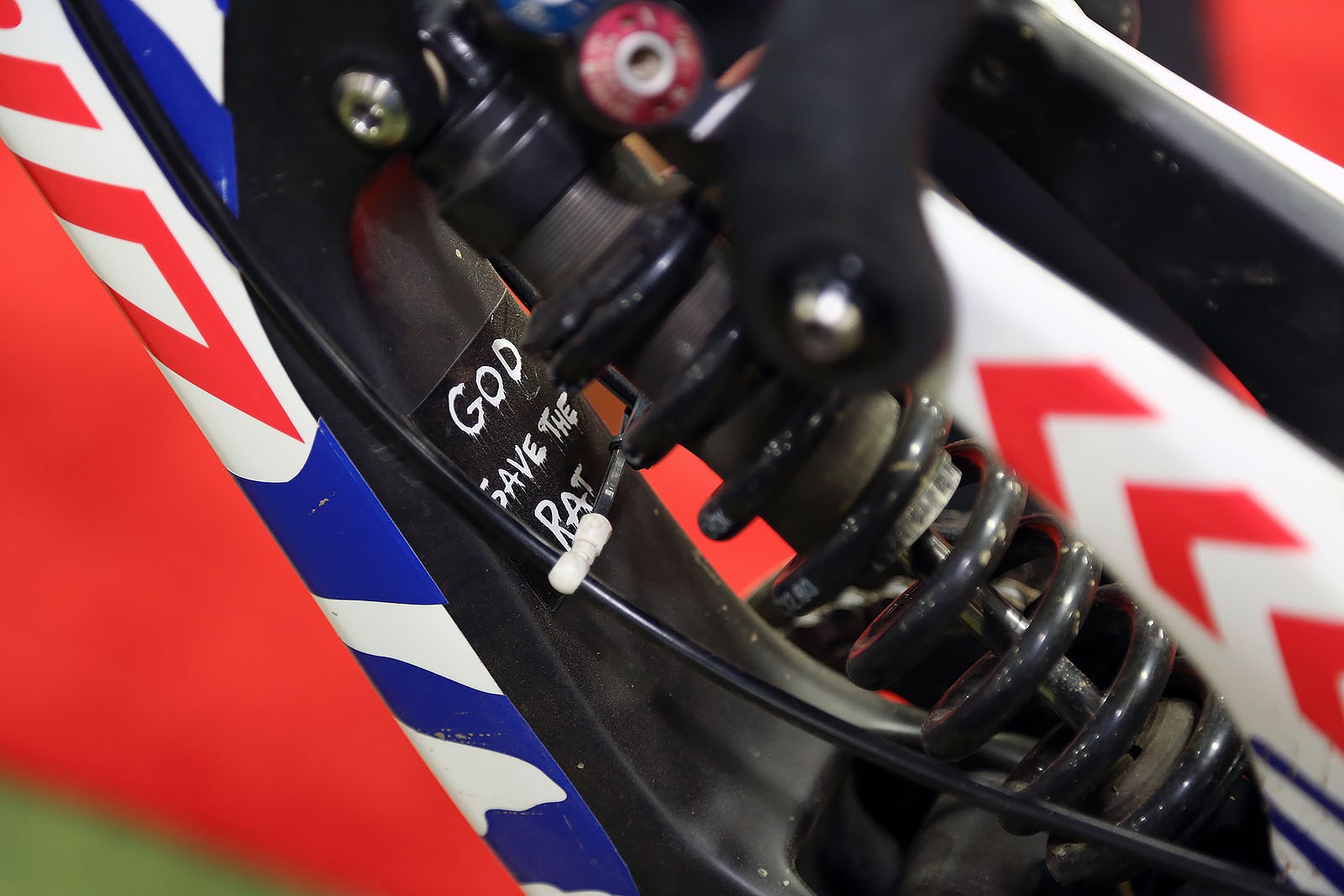 Tucked below the FOX RAD shock is a little message for Josh. Josh is most fussy about his suspension settings, running his suspension in what Doug described as “medium settings” with the rear shock a touch softer than the front. Doug said that he can jump on Josh’s bike and his bike “feels comfortable”, compared to Peaty’s and Greg’s that are sprung really stiffly at the front. 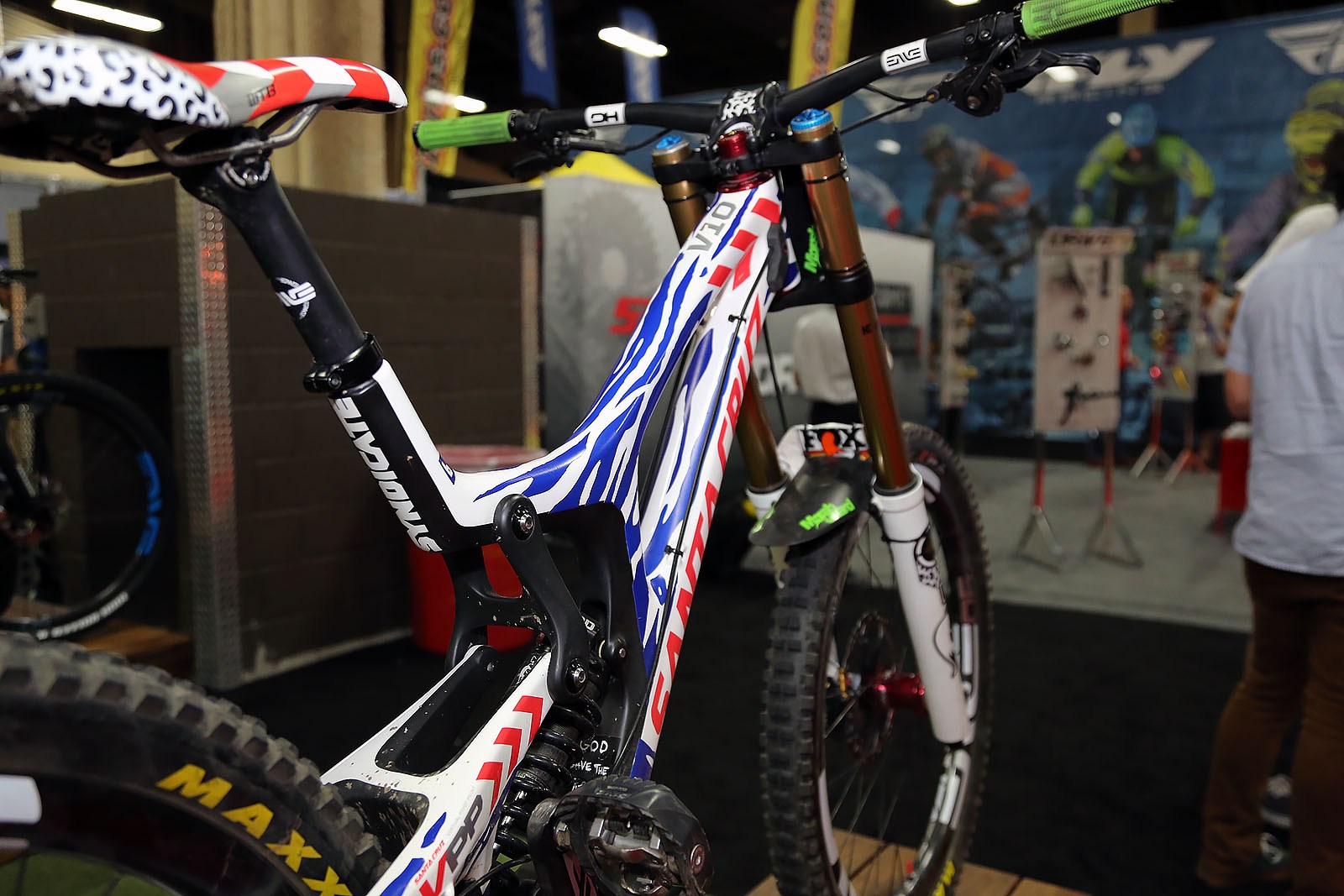 For race day the bikes get a special set of wheels with a “track tune”, no rubber seals for the hubs and sewing machine oil for the bearings and free hub, all to make the bike roll as fast as possible with minimal drag. Josh upped his tire pressures for Norway as the Hafjell track featured some fast berms that were causing the tires to squirm around on him. But Doug wouldn’t tell us what Josh normally runs or what he pushed it to. That info is given out on a need to know basis. 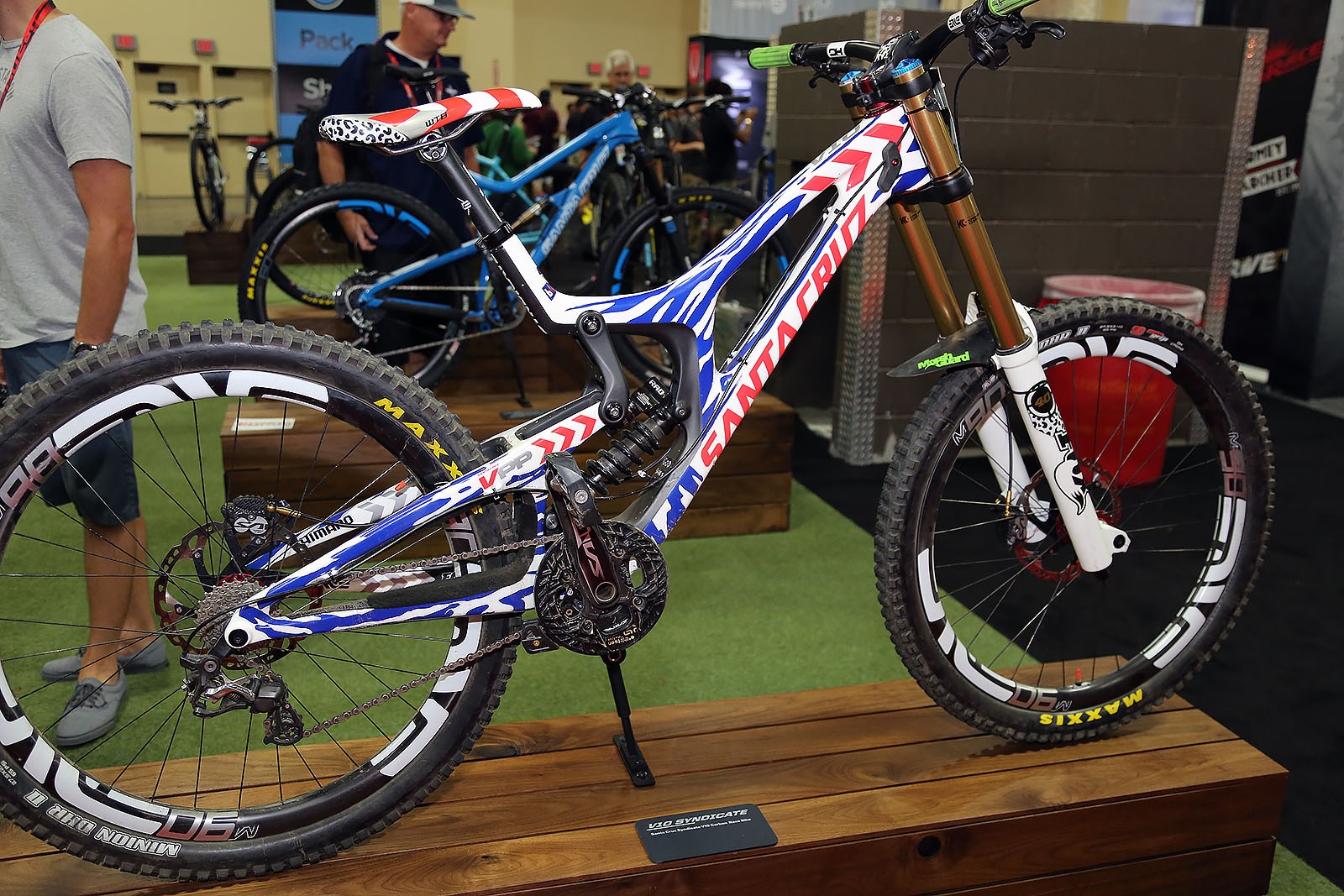 There is no adjustable travel on this version of the V10. Rear squish set to “about 8 inches”. There is a small chip to raise or lower the bottom bracket, with Josh running his in the lowest setting.

Details on the new Santa Cruz V10.5 are thin on the ground with the exception being that the bike is built around 27.5″ wheels. No geometry numbers were available and the bike seen in the photos is still a prototype. You can’t think that this is far away from production though and we are looking forward to swinging our leg over one soon.

Doug said that Ratboy will be practising the lyrics to the United Kingdom’s national anthem over the winter so he is ready for the top step of the podium next year, but will he get singing lessons too?

Is it safe to assume that 2015 will now be the warranty return year of hell for all hubs?

So does that mean the new V10 XL is going to be bigger?
I would also be super curious to know how many Enve rims Peaty, Minaar and Bryceland go through in a season.

"I would also be super curious to know how many Enve rims Peaty, Minaar and Bryceland go through in a season.
"
That, they will never share…

I read (don't remember where) that they were pretty much going through a DT Swiss rim per run, and they were happy that they could get a whole weekend out of the ENVEs.