I got fooled twice. When the box arrived and I picked it up I figured it was empty. The volume to weight ratio was off. Once I opened up the packaging I realized that for the second time Next SL cranks felt like nothing to me. If you don’t believe me go into your LBS and pick up a box filled with two crank arms and one spindle.

Weighing in under the advertised weight of 430g. The axle is removable with a 16mm Allen tool – if you happen to have one of those lying around. This goes a long way toward future-proofing your investment. You can swap the axle out for other applications – including your fat bike and be prepared for whatever might be on the horizon.

If you are a weight weenie, and I confess that I am, cranks are a great place to shed some fat. Compared to the relatively svelte 590g Shimano XTR cranks in 1x format, Raceface’s newest arms and spindle will save you 160g. That’s more than a third of a pound of rotating weight. At what cost? I’ve had good luck with the durability of the original Next SL cranks, but a little less with the BB30 bottom bracket which started to creak after 4 months of hard riding in crappy conditions. XTR cranks retail for US$400 and full pop on the G4s (with a single Aluminum 32t Cinch ring( is US$480*). So that’s a little over 2g saved for every dollar spent. A SRAM XX1 Eagle crankset will set you back US$425 at full retail and it weighs just 465g. It’s important to note that Next SL and other Raceface carbon cranks are made in Canada using US-produced materials. At least part of that would keep DJT happy. 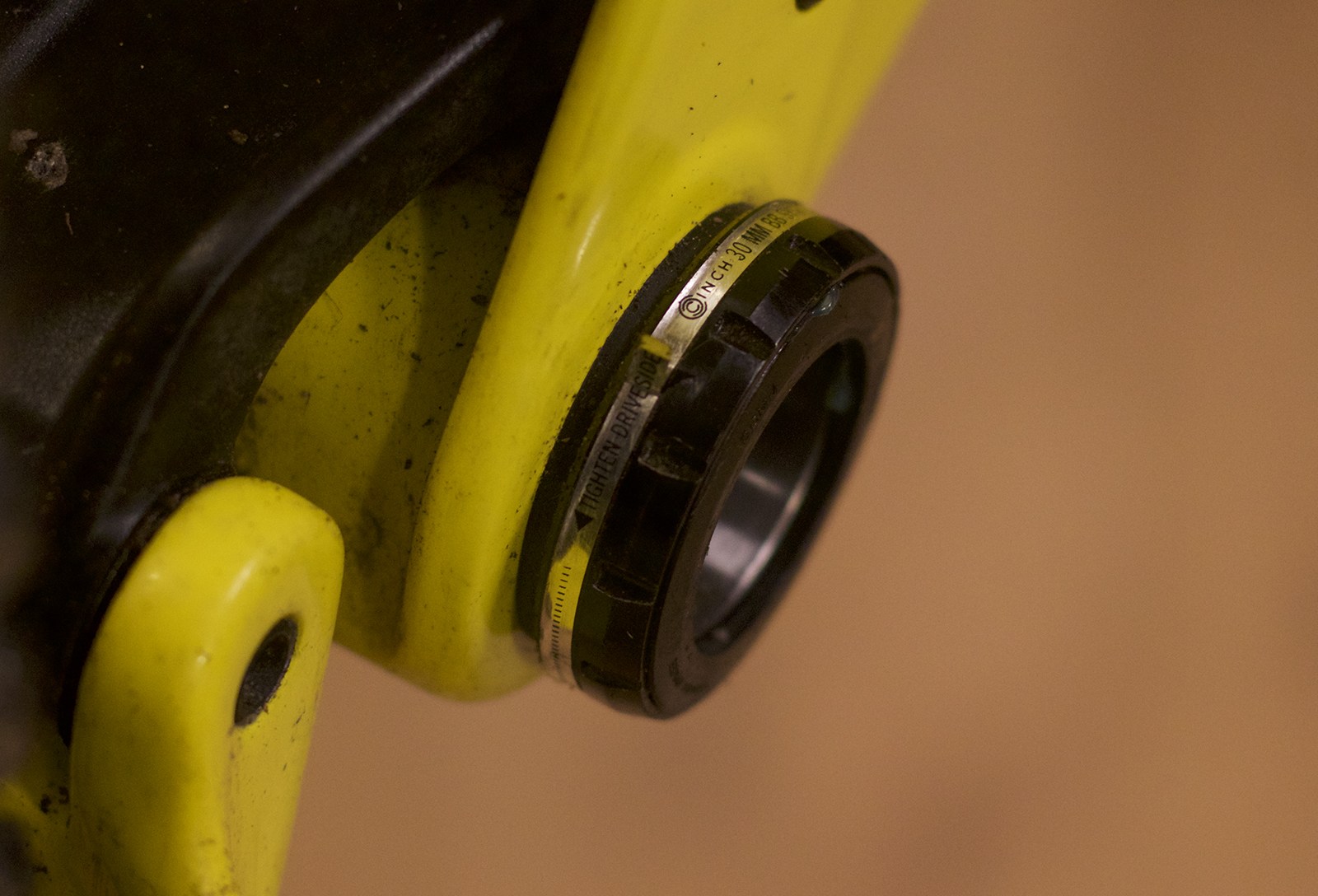 The BSA bottom bracket cups could use a refresh. Markings are presented on a metallic decal that is already peeling away. Even when the adhesive is working, this looks a little cheesy for a premium product.

In use the G4s work just like the original Next SL. Aesthetically they are more angular and they have a slightly more modern but less organic look to my eyes. Raceface tells us there is improved lateral stiffness which should increase chainring and chain life.Stiff as a roadie on A Line.  Otherwise, aside from 15g of weight savings, there is little to separate the G4 from the original Next SL. 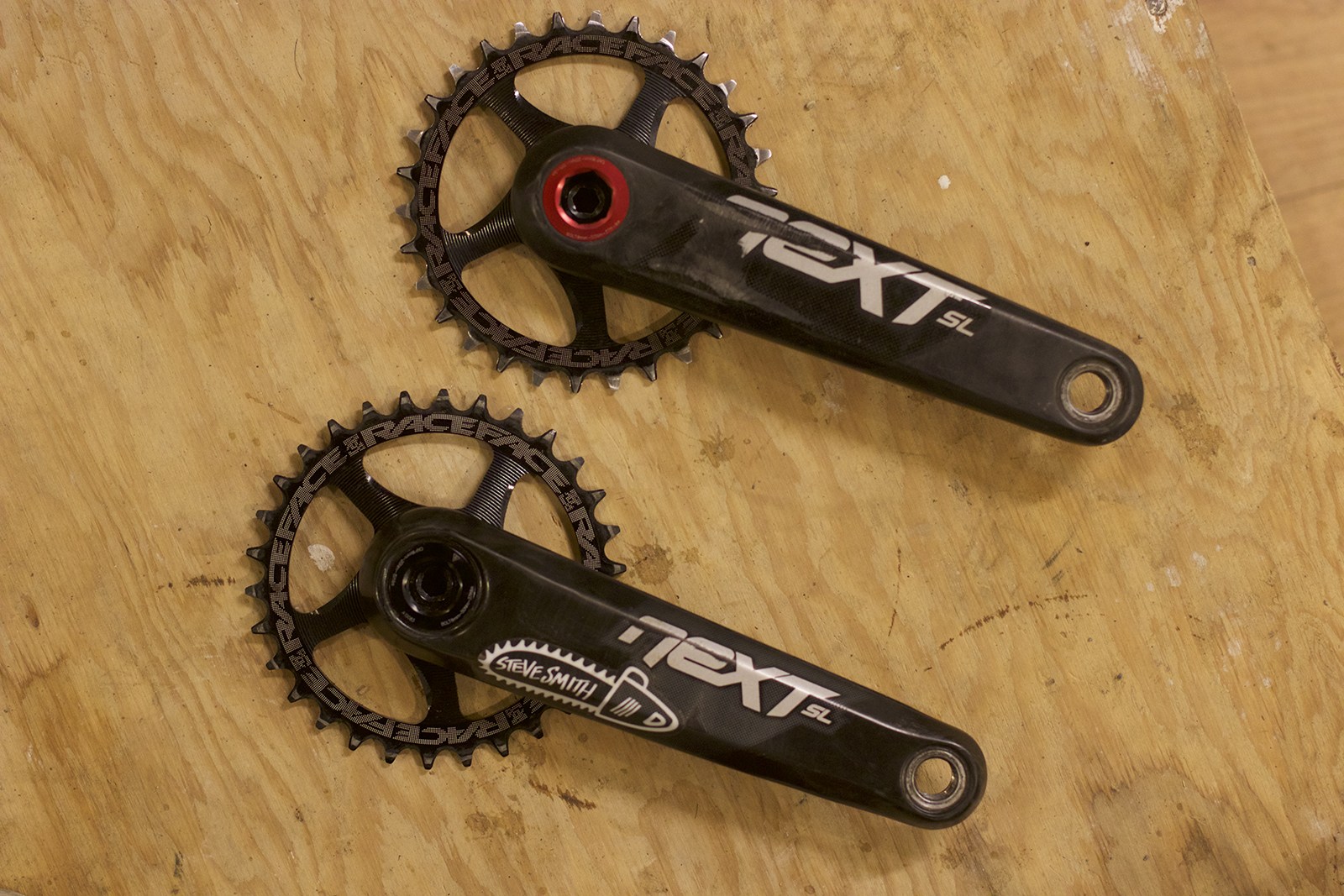 The original Next SL cranks (top) wtih the G4s. 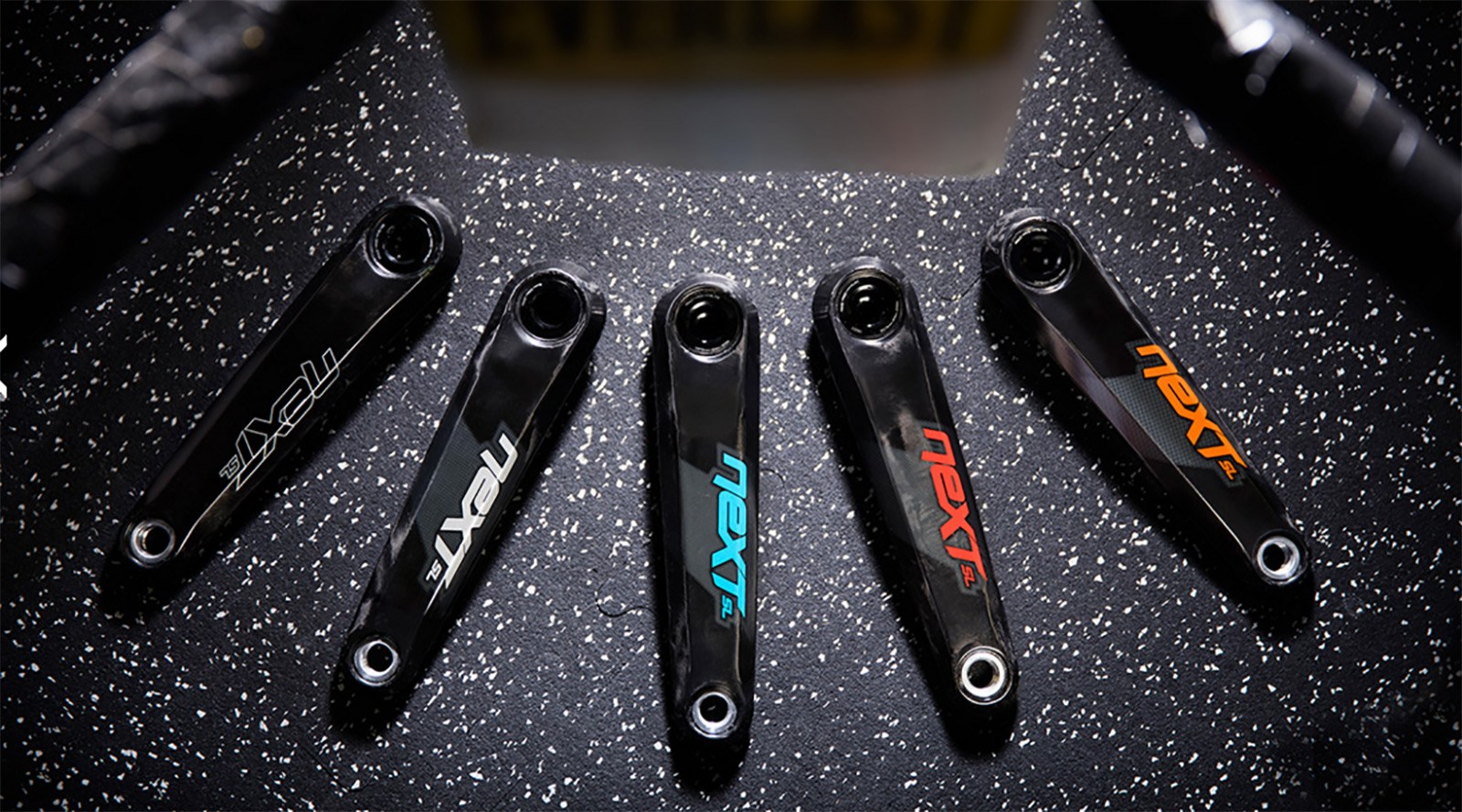 Five colour schemes to choose from. Or three colours and two shades for the pedantic among our audience. Photo courtesy Raceface.

The artfully hewn removable 30mm spindle is one of the most impressive elements of the G4. Extra drilling sheds extra grams. 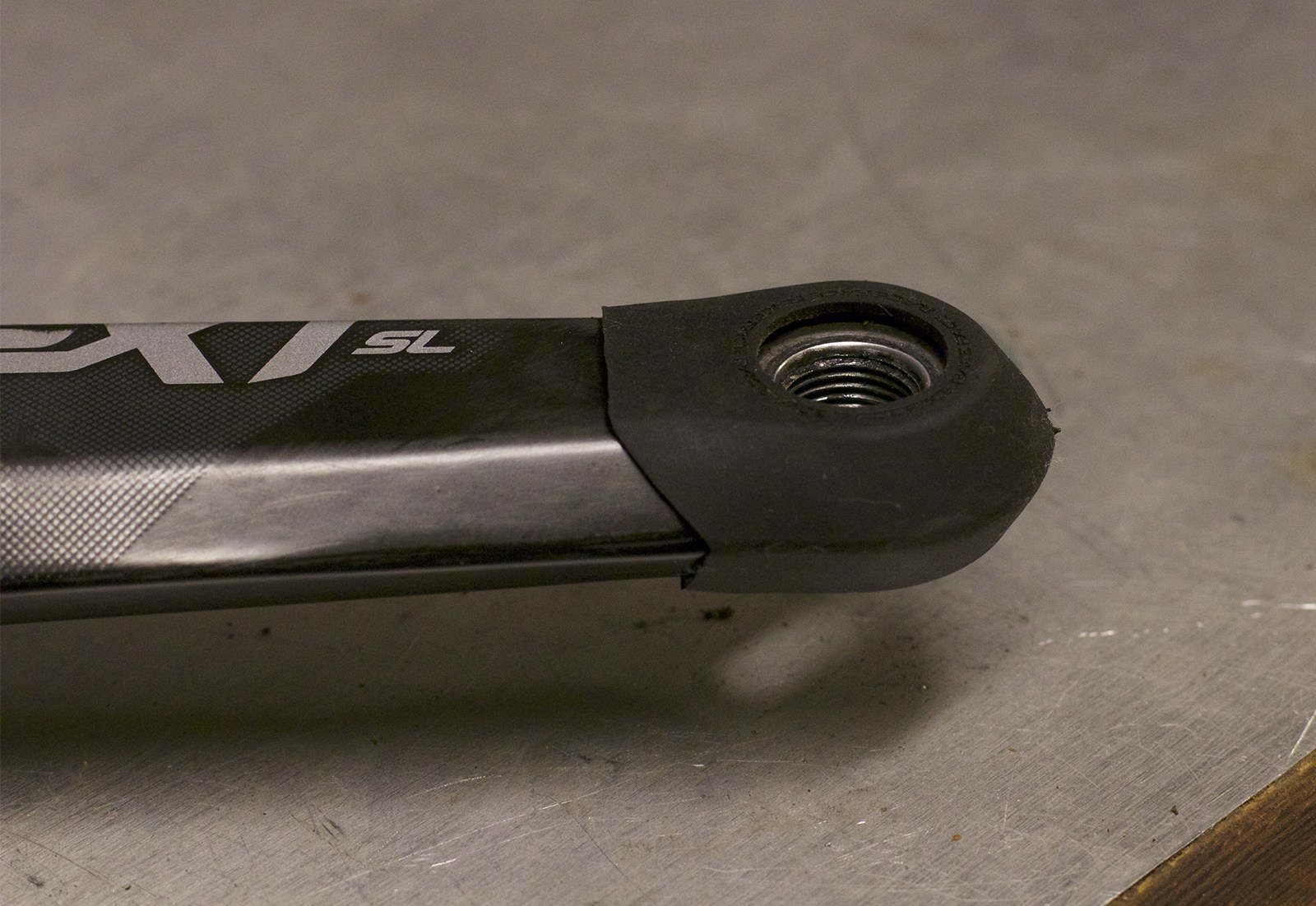 These boots add peace of mind and dull any sickening scraping noises. 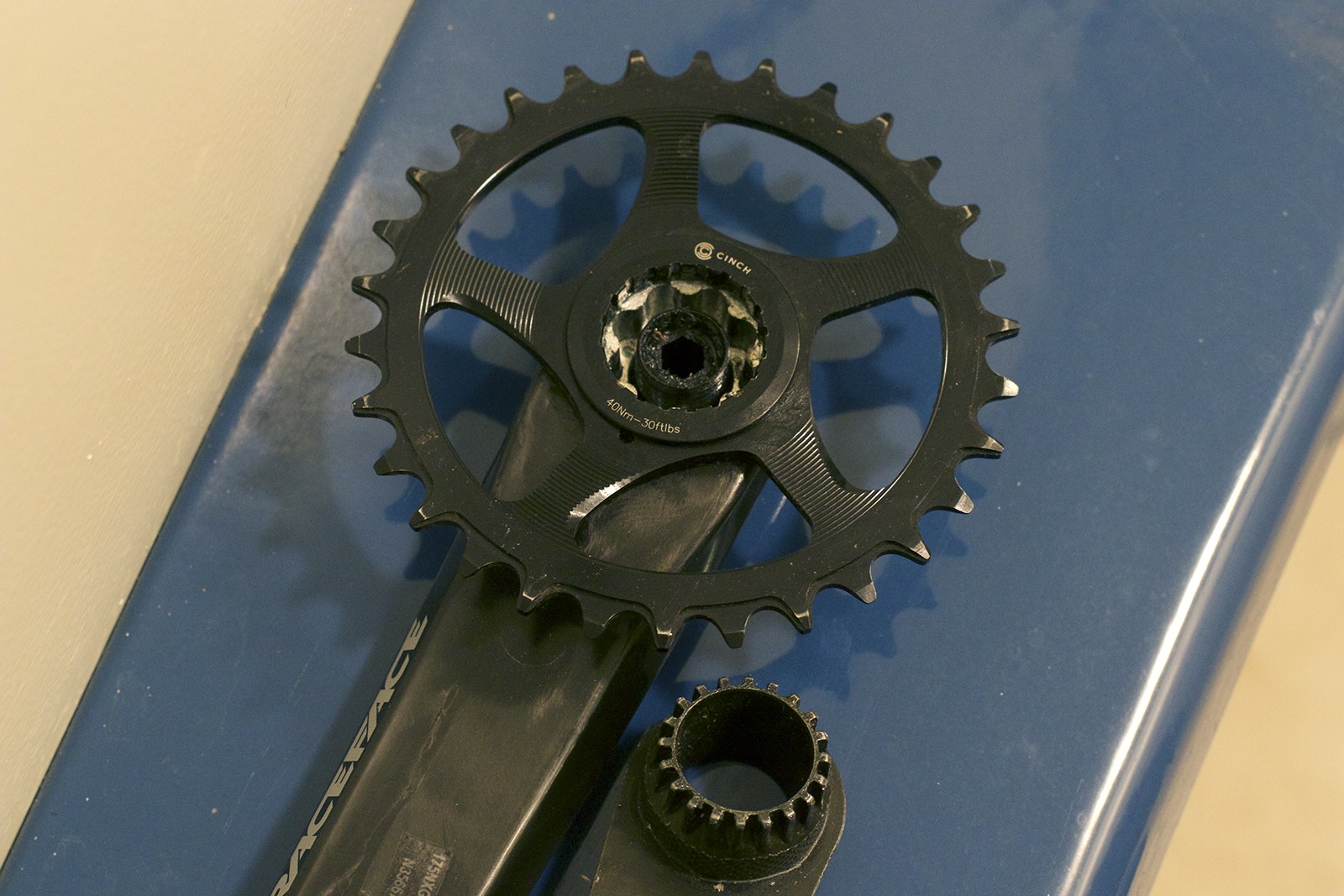 I miss chainring bolts like I miss chicken pox. The Cinch system is aptly named. A single lockring holds the direct mount chainring in place. Tighten it to 40nm with a Park BBt-22 or other compatible tool.

SRAM’s X-Sync2 Eagle chainring (left) compared to Raceface’s direct mount narrow-wide ring. The SRAM teeth have an asymetrical profile front to back while the Raceface teeth are symmetrical and more straightforward in shape.

A concern I had was how the Raceface direct mount ring would mesh with SRAM’s Eagle chain and cassette. I had no trouble with 11-spd but this is a new ballgame. SRAM re-designed the tooth profile for Eagle chainrings to improve durability, reduce friction and noise and improve chain retention. The resulting shapes are complex and intricate and the teeth are no longer symmetrical. Thankfully everything worked fine from the first ride. Running is smooth and quiet and chain retention remains perfect. What I can’t comment on is durability, one of the main considerations in SRAM’s redesign. Time will tell. 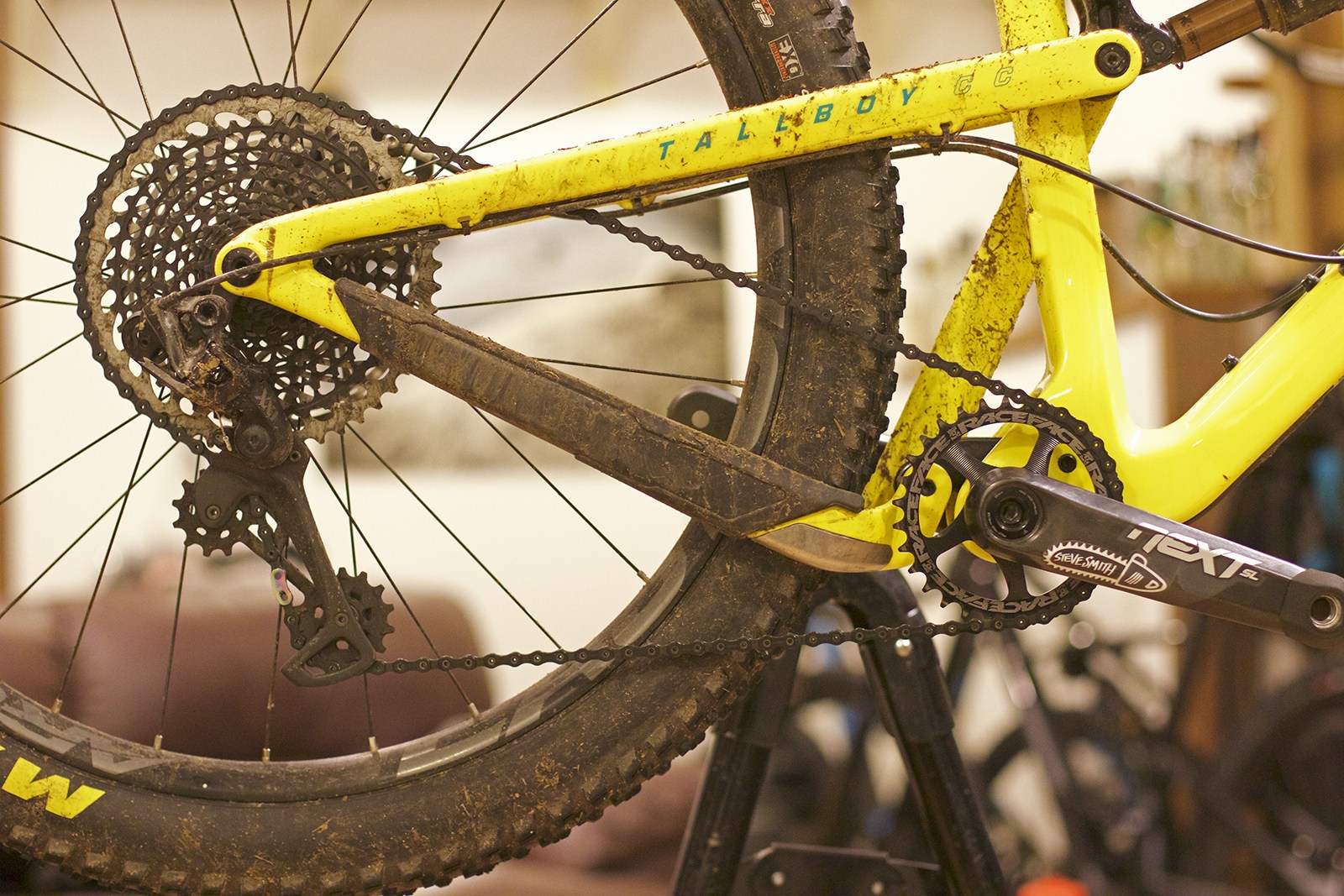 Early on I had some shifting problems with my Santa Cruz Tallboy 3 tester – before the Next SL G4s were installed. It was a little slow getting into the 50t cog on the trail but it was perfect on the stand. Securing the shifter housing and some slight limit screw and B-tension fiddling cleared things up and now there are no issues at all. 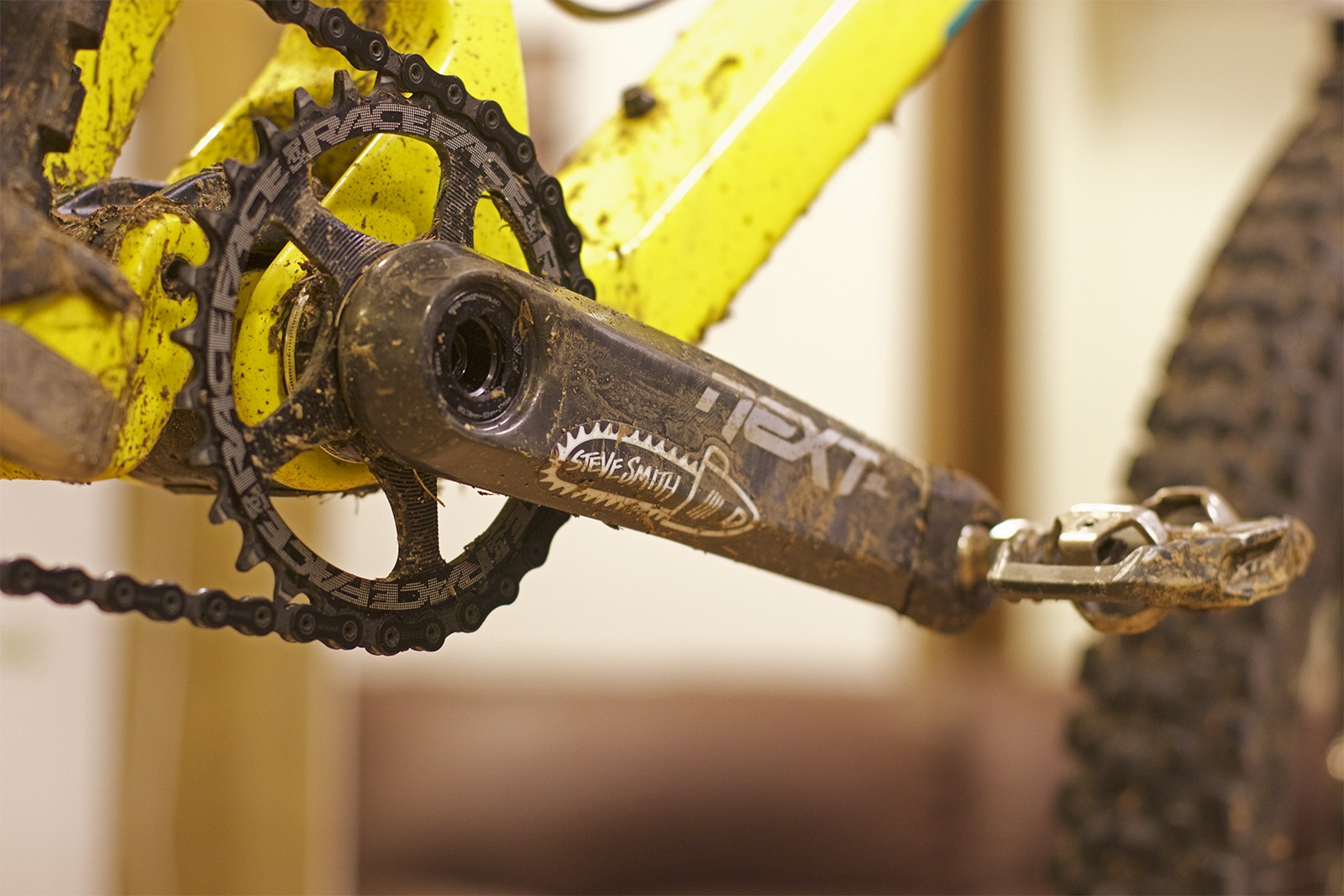 After a month of snow riding the return of mud has been glorious.

In terms of ease of use, Raceface’s Cinch line of cranks is second to none. Removing the arms and spindle for this article took less than five minutes and removing the chainring was quicker still. Setting up chainline and removing play are also trivial tasks. Having never encountered the tool before I assumed it was proprietary to Raceface but in fact an interface used by other companies including Chris King, Zipp and Rotor.

If you are looking to lighten things up or put together a once-in-a-lifetime build these cranks could be the ticket. If you are eligible for Clydesdale class or if you are prone to smash parts you may want to check out the SIXc or something in aluminum.

The original Next SL cranks remain available for a little less cash if you can find them as well.

Click here if you are crazy for Q factor.

For more on the Next SL G4 click here.

*US pricing used because some comparables were unavalable.

Ready for more carbon in your life or happy with aluminum?

Do you save 250g over XTR if you only run one crank arm?

That pushes you to 450! I think the axle is another 60 but you'd have to tuck the crankarm into your shorts.

I've got 3yrs [probably ~21 months of regular riding during that time] on a set of the older Next SLs and a RF PF92 BB. Both are going strong. I keep expecting to need to replace the BB, but it's silent and spins smoothly still. My only issue is the tiny set bolt in the pre-load collar stripped so it's permanent until I figure out how to remove it. My fault, but it's an easy mistake to make.

With booties on my Next SLs has survived many rock hits [low modern BB!] with no damage.

The chainline with RF rings [at least original generation ones] is quite wide, which meant crappy chainline in the big cogs where I spend most of my time. Wolf Tooth RF compatible rings have less offset so the improve the chaibline in that situation.

When I bought a new crank I had to choose between the new G4's or the older version $100USD off. I grabbed a second set of the original cranks.

I believe the Next SLs are still made in Vancouver [at least the old version was] and that's pretty cool. Not many locally made bike component these days!

Interesting that you haven't had problems with your BB92 since that's the most problematic size for 30mm spindles because of the narrow bearing width. Good to know. Three years is outstanding.

I was pleasantly surprised both how long the BB is lasting and how tough the cranks are proving to be. Hence the fact I bought a new set.

My GF also had that a RF 30mm spindle crank and PF92 BB with no issues. Despite her lighter weight she manages to destroy more gear than me and faster. 😉

I've also had good luck with the BBs but I've also pulled the seal and packed in extra Bel Ray waterproof grease in the bearings, then packed the backside of the bearings as well once they're installed. I can usually get up to a year out of a BB92 BB this way.

I have around 800km of riding and racing on my BB92 RF bb and my 1st gen NextSL cranks with no issues , the GXPBB92 bb that came with the bike was toast with less mileage

My son broke his 30mm spindle sl's in two weeks. Their hanging on the wall. Back to aluminum! ! !

How did they fail?

The 51mm chainline is now slightly more favorable for boost bikes since boost is 52mm. Small detail but good to know.

Yes. I hope to skip Boost and jump back in when we get to Boosty Boost, Boost 2 Mega or Ultimate Boost, but yes the RF offset is essentially Boost ready out of the box.