Maybe a tailgate pad that keeps your multi-thousand dollar bikes from falling into each other is not ‘dropper post’ revolutionary, but it is a long overdue idea. Many of the scratches on many of the bikes I have owned over the years have been transport or shuttling related. So I was excited when I saw a photo of the new Race Face Tailgate Pad. 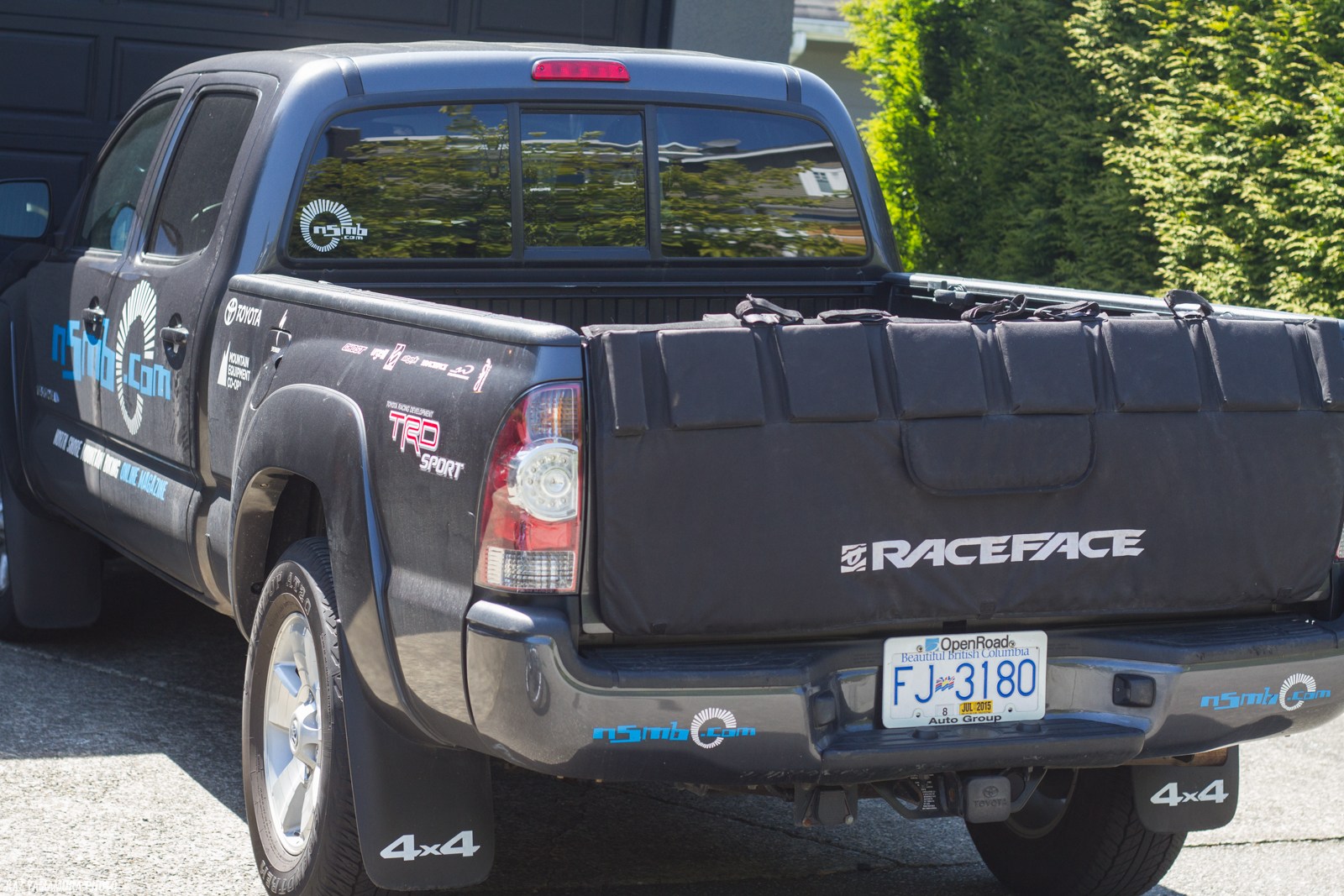 The Race Face Tailgate pad is a perfect fit for our Toyota Tacoma – but on other trucks with wider gates things line up differently.

The new pad has raised bumpers along what is supposed to be the inside (truck box facing) edge. There are also larger raised square pads that face outward from the tailgate designed to keep your forks stationary. The idea is that the bumpers keep the downtubes in place and the bikes separated. If all that fails then five of the bumper set-ups have Velcro straps designed to secure your downtube to the pad.

So do all these extra bits actually work or due they just catch the mud and dirt? 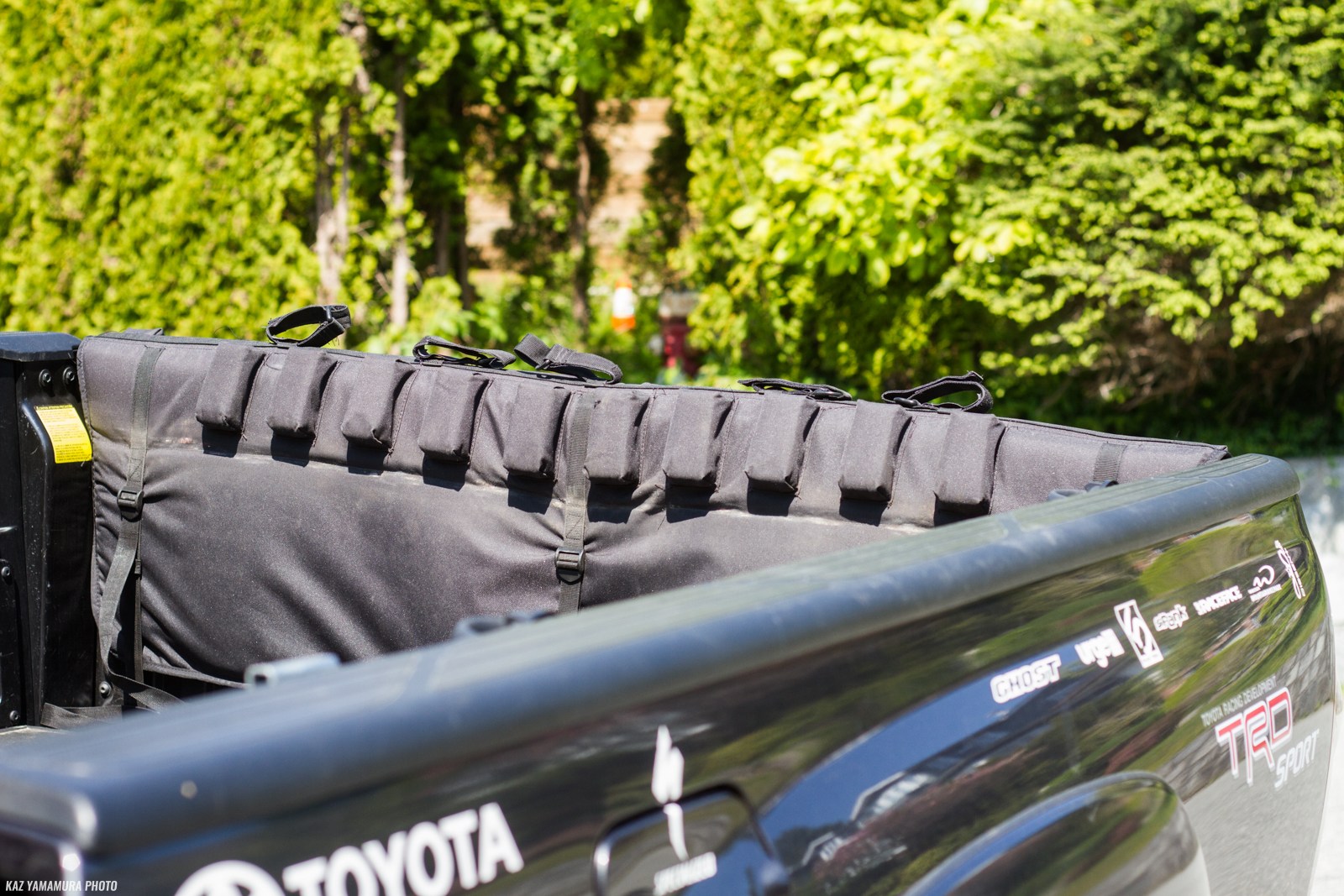 This is how the pad is designed to work, with these pads facing toward the cab of the truck.

In the last few weeks I have used and tested one of these pads on a compact truck (Nissan Frontier) for many Cypress laps, a road trip to Race the Ranch in Kamloops (with many race bike shuttles) and another road trip to the Underworld Cup in Port Angeles. 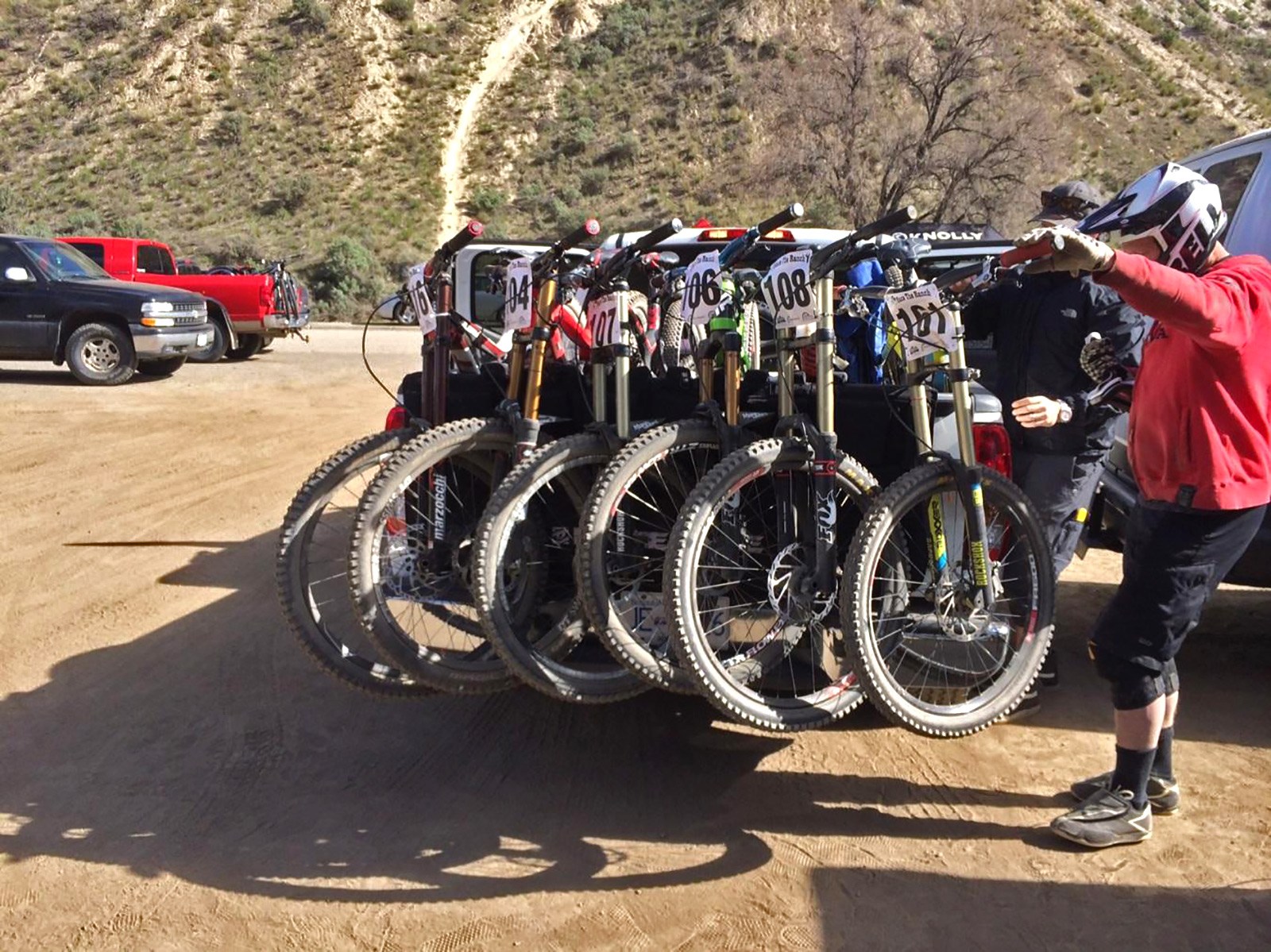 Six DH bikes loaded without straps. The Race Face pad works great for quick trips because the dividers keep the bikes in one place without the straps. Photo – Mike Wallace.

The first thing I noticed when grabbing a hold of the pad is the nice soft inner lining. Considering new Ford F-150s set you back over $60,000 this is an excellent feature. Only time will tell how the lining stands up to moisture and wear but it looks like a great start.  The pad attaches just like the Dakine version, with 3 easy to install straps. In the last 3 weeks I have not needed to adjust the straps once. 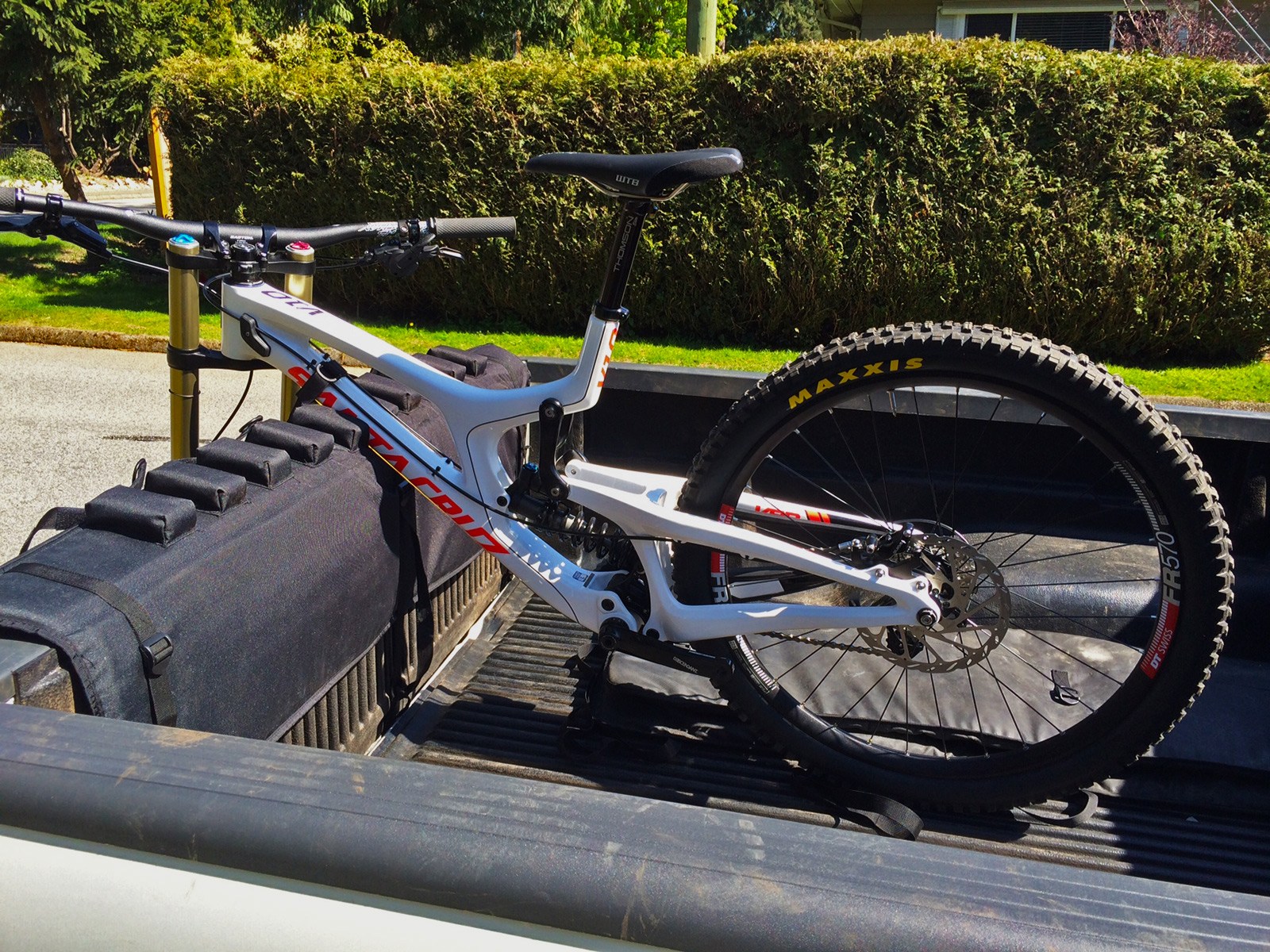 When used with a truck that has a wide gate it’s not possible to have the downtube dividers on the inner face, as seen here on a Nissan Frontier. This makes it difficult to use the straps on some bikes but the dividers hold the bike very well oriented this way. Photo – Mike Wallace

The difficulty in designing a smart pad like this became apparent very quickly however. The final orientation of the foam dividers is a function of how thick your tailgate is. A Tacoma tailgate is very thin when compared to the Frontier tailgate and thinner still when compared to a new generation full size pick up like the F-150. The pad comes in two sizes. We tested the small version which is 57” across while the larger one is 61”.  On the Nissan Frontier the smaller raised bumpers ended up on top of the tailgate. This is not the intention but it works just fine for keeping the bikes separated. It is awesome doing quick shuttle loads and not having to worry about the bikes falling over into each other. 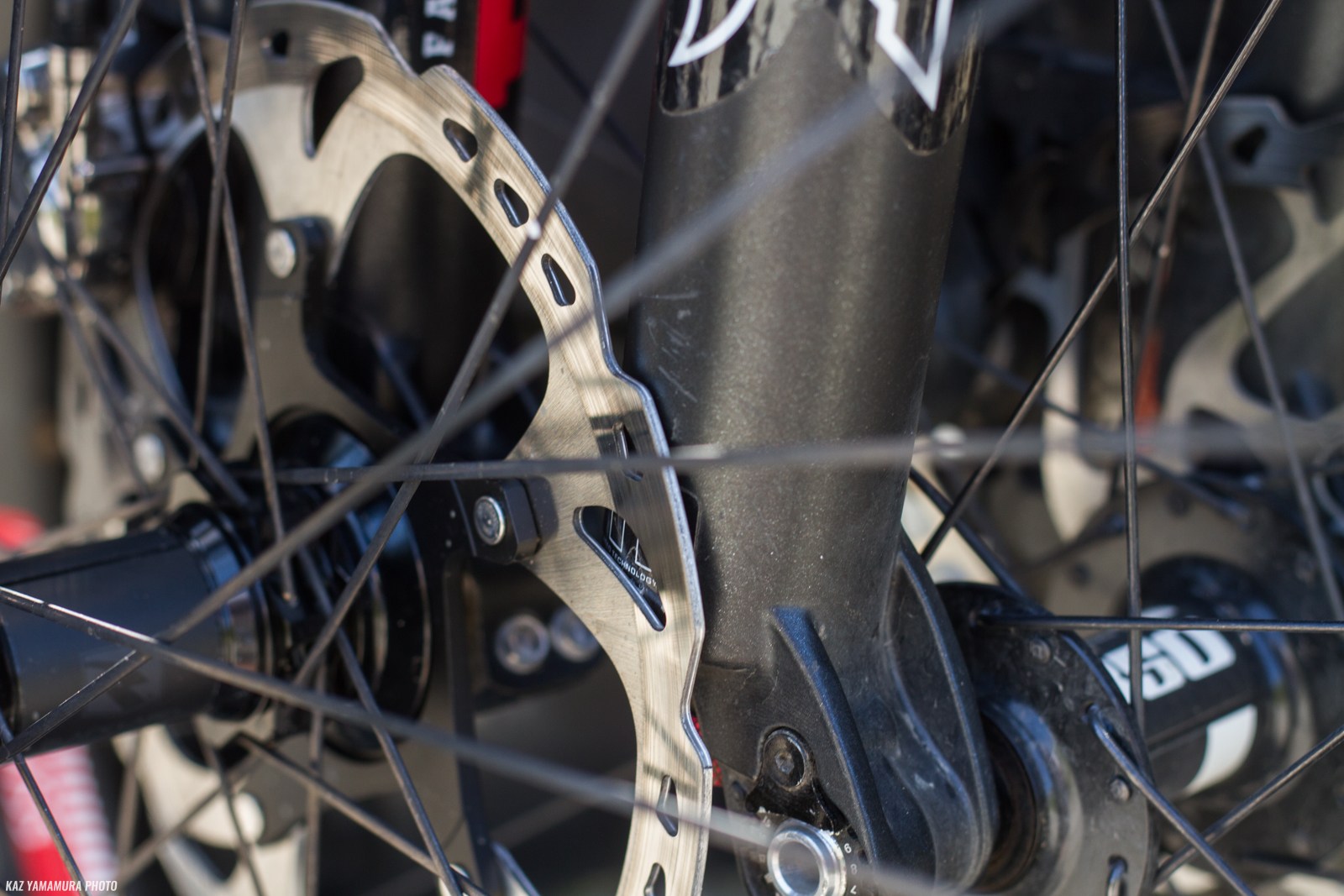 Overlap issues with five bikes loaded using the strap locations. As pointed out below, orienting the bikes with rotors facing out solves this problem, but with wider spacing rotors in works fine as well.

The larger square pads facing outward from the tailgate really don’t seem to do much for dual crown forks. However after trucking a load of boys out to the Squamish High School XC race I realized the larger pads work well with single crown forks, bracing the inner fork stanchion. 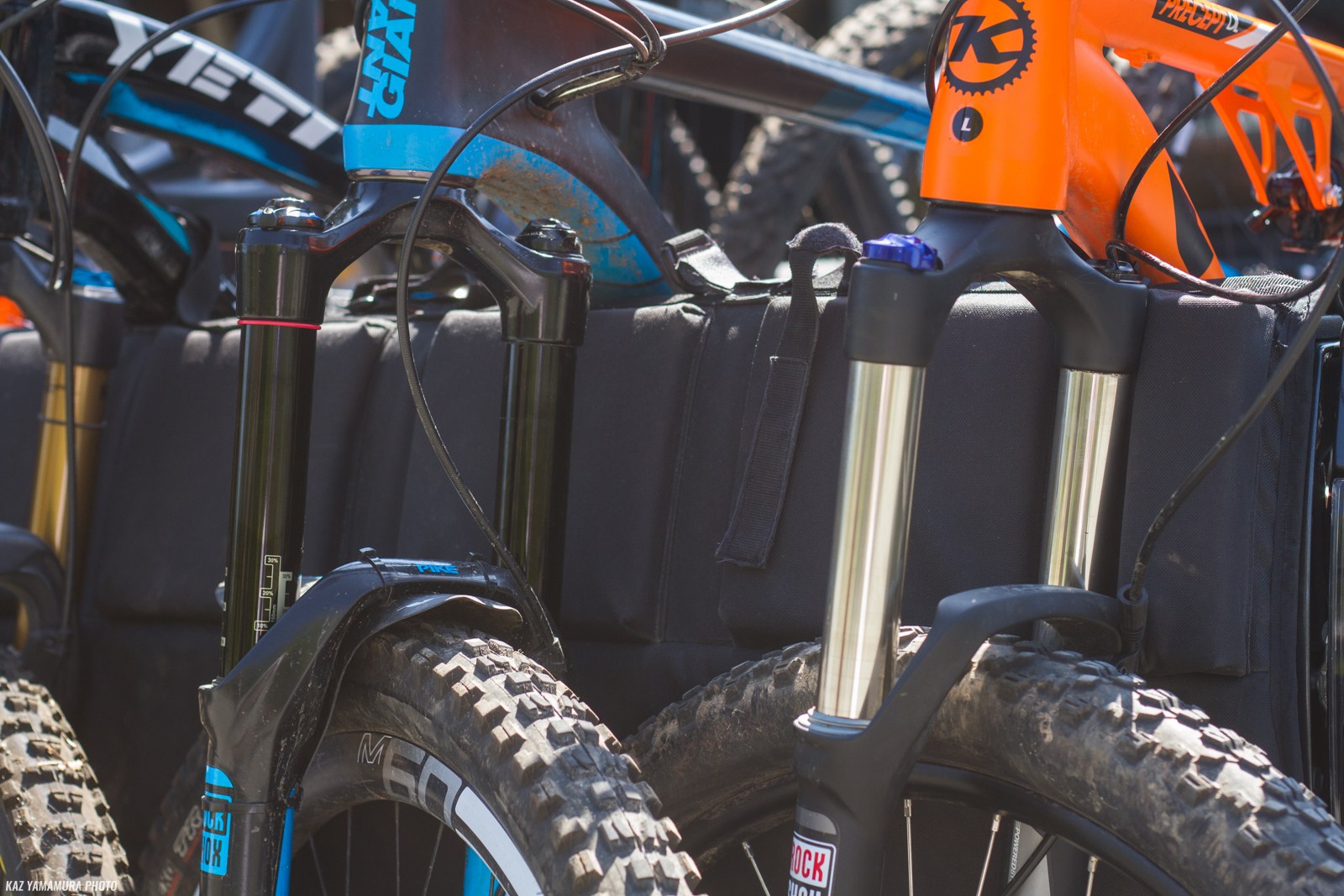 The channels on the back panel of the pad cradle single crown forks to keep everything stable. This spacing allowed us to carry five bikes without worry about brake levers on top tubes – but it makes using all the straps impossible.

The 600 denier fabric that Race Face uses on the pad is great. More than once we stabbed a dangerously barbed flat pedal into the pad with no resulting damage or even a mark. Tough stuff. 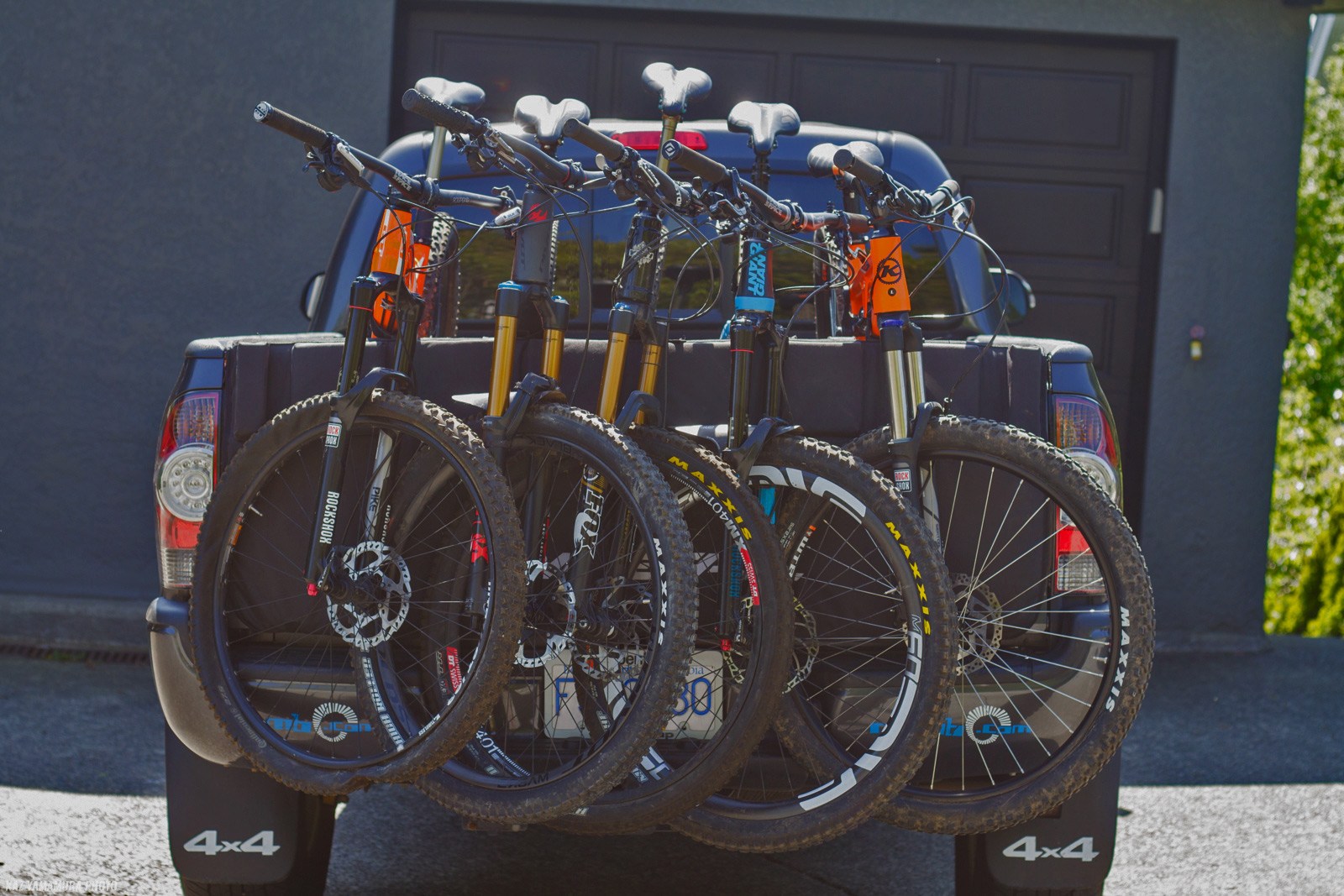 We found that with five bikes with 650b wheels the spacing of the straps wasn’t wide enough to keep brake levers off top tubes. The bikes are held well enough without straps that you can live without having every bike strapped – but a little more breathing room would be nice. The advantage with this spacing is that you could squeeze 7 bikes on in an pinch.

Longer straps would help the pad accommodate a wider selection of bikes and trucks. 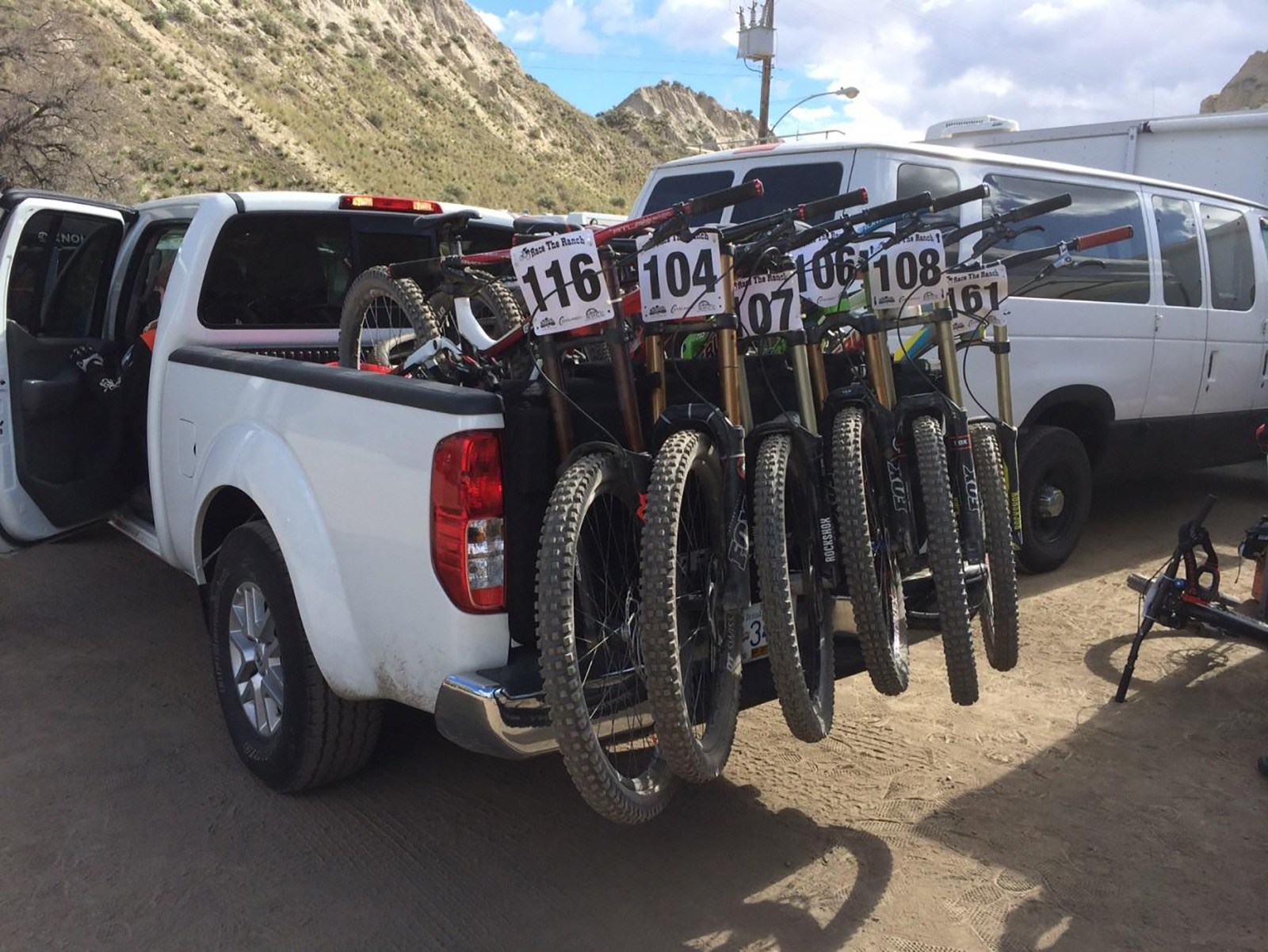 How to be a hero at a self-shuttled DH race. Photo – Mike Wallace.

With the Frontier, and its wider tailgate, the straps were too short for most frames. One solution would be for Race Face to provide long straps and let the customer cut them down to the appropriate length. We found spacing an issue as well and the strap locations weren’t appropriate for the 650b bikes we loade. The bikes needed to be spaced further apart than the straps allow to prevent contact and give the bikes some breathing room. The straps work great when you are transporting two or three bikes but beyond that it gets tricky.

FEATURES
-Outer pad is constructed of 600D + PVC. A durable denier fabric with herringbone weave and DWR treatment for water repellancy.
-Micro-brushed inner lining protects your tailgate from rub and wear marks.
-Raised bumpers facing into the truck box seat most frames snuggly preventng bikes from coming into contact while en route.
-Additional raised square pads along the outer tailgate offer the additional security of holding forks in place.
-When the shuttle gets steep and rowdy, secure frames down with a velcro-backed webbing loop and strap system.

Are you looking a truck pad that keeps holds on tight to your precious cargo?

Good call. At the same time when they are spaced a little wider you don't need to think about that.

Also rotors should be out to clear the bumper on smaller trucks, like the last picture.
On my Ranger the rotors will hit the bumper when facing inboard, but it is not so much an issue on bigger trucks. Ride Free

Made a vid on how the raceface pad fits my truck. Can't post a direct link here yet so look up Anthony Nikolin on youtube

How does this affect towing of a camper trailer? I know I should be fine driving forward with clearance, but what about backing up and having to turn shareply?