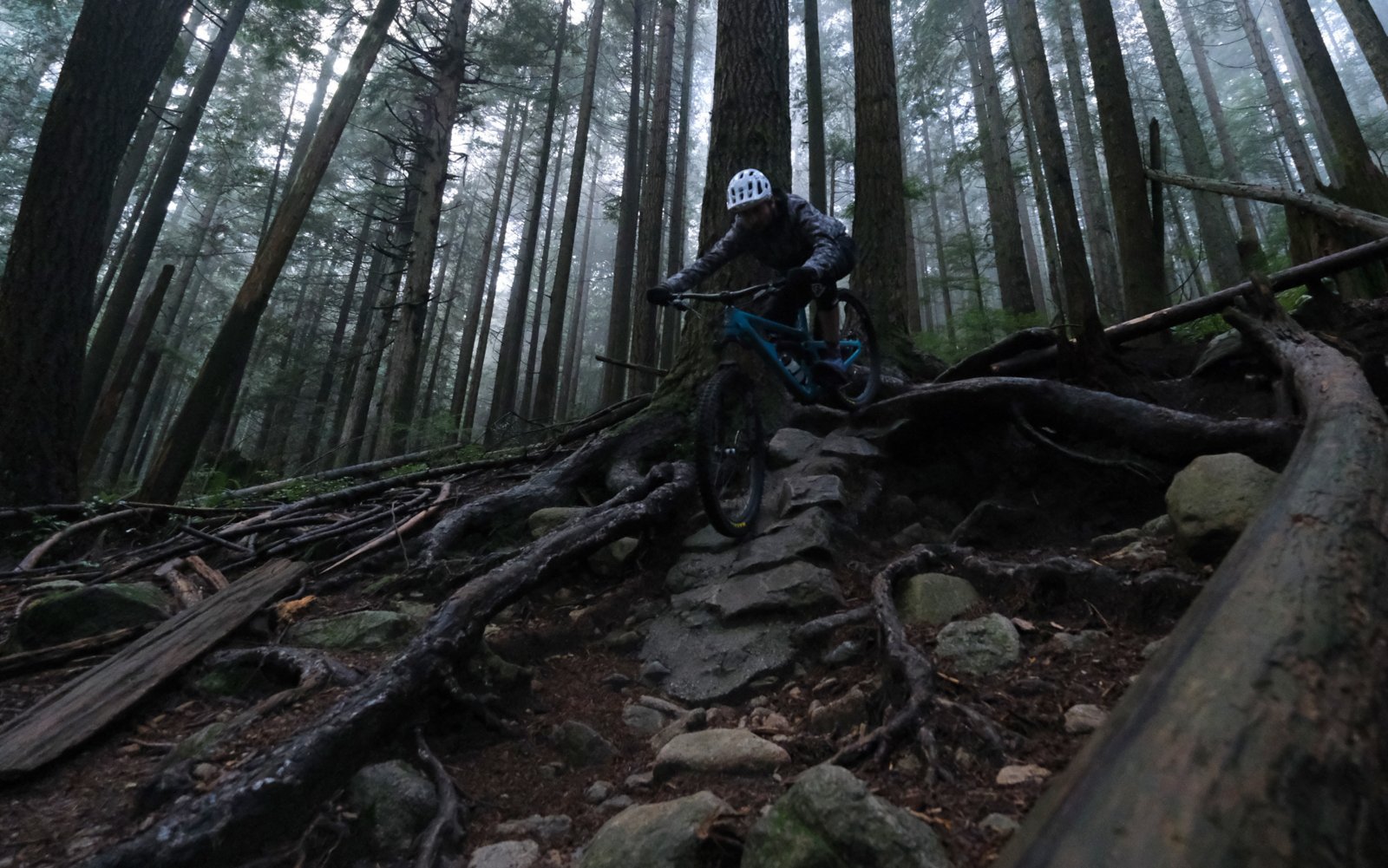 It was nearly a year ago that I reviewed two helmets from POC - the Tectal Race Spin and the Axion Spin, which you can see here if you're wanting all the details.

Axion Spin - Same great fit, held back by what I thought might have been a pre-production problem with the fit gizmo.

I had spent a few months with each helmet when I wrote that review. Both have hung around (for different reasons), and it seemed like it was worth writing a brief follow-up. 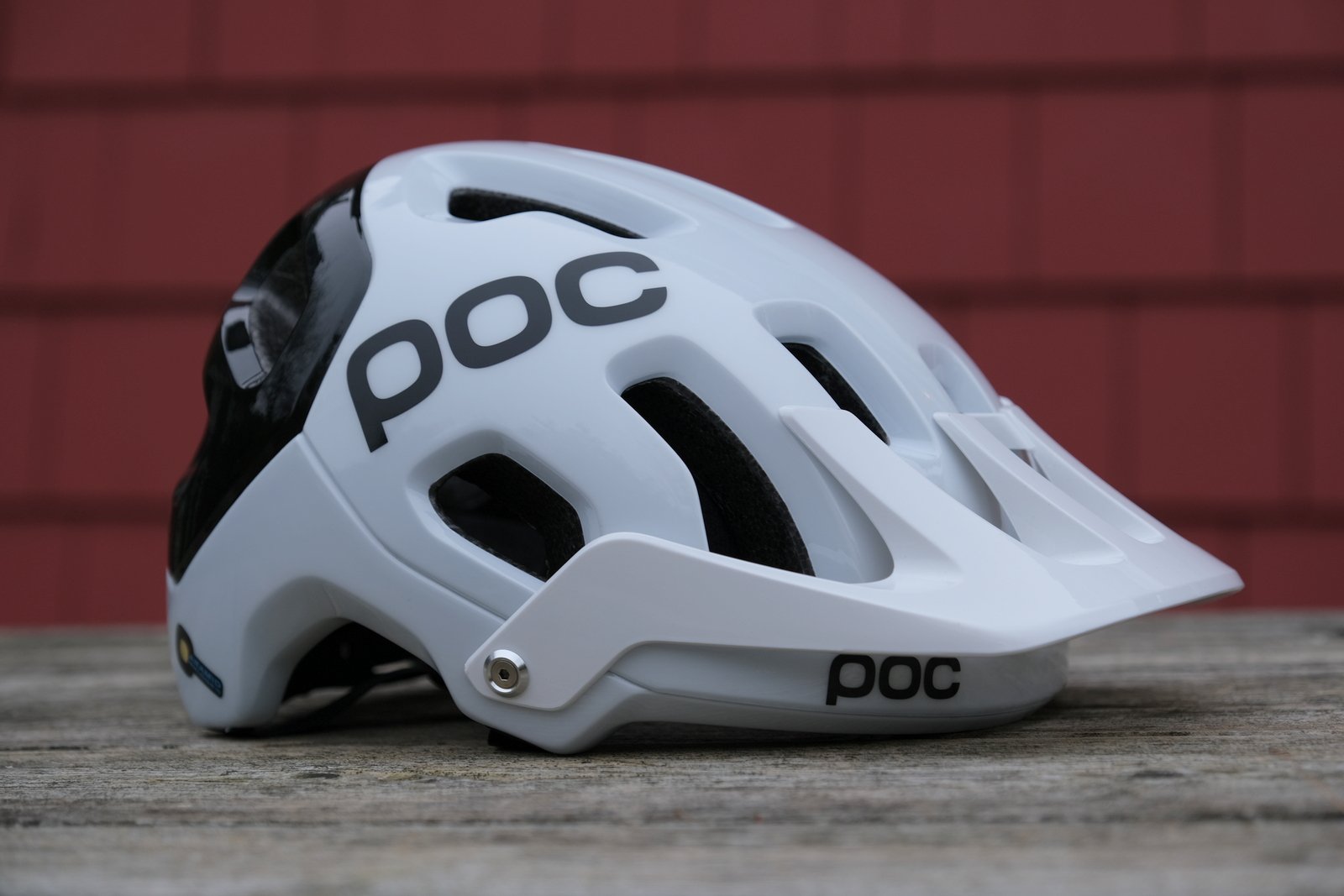 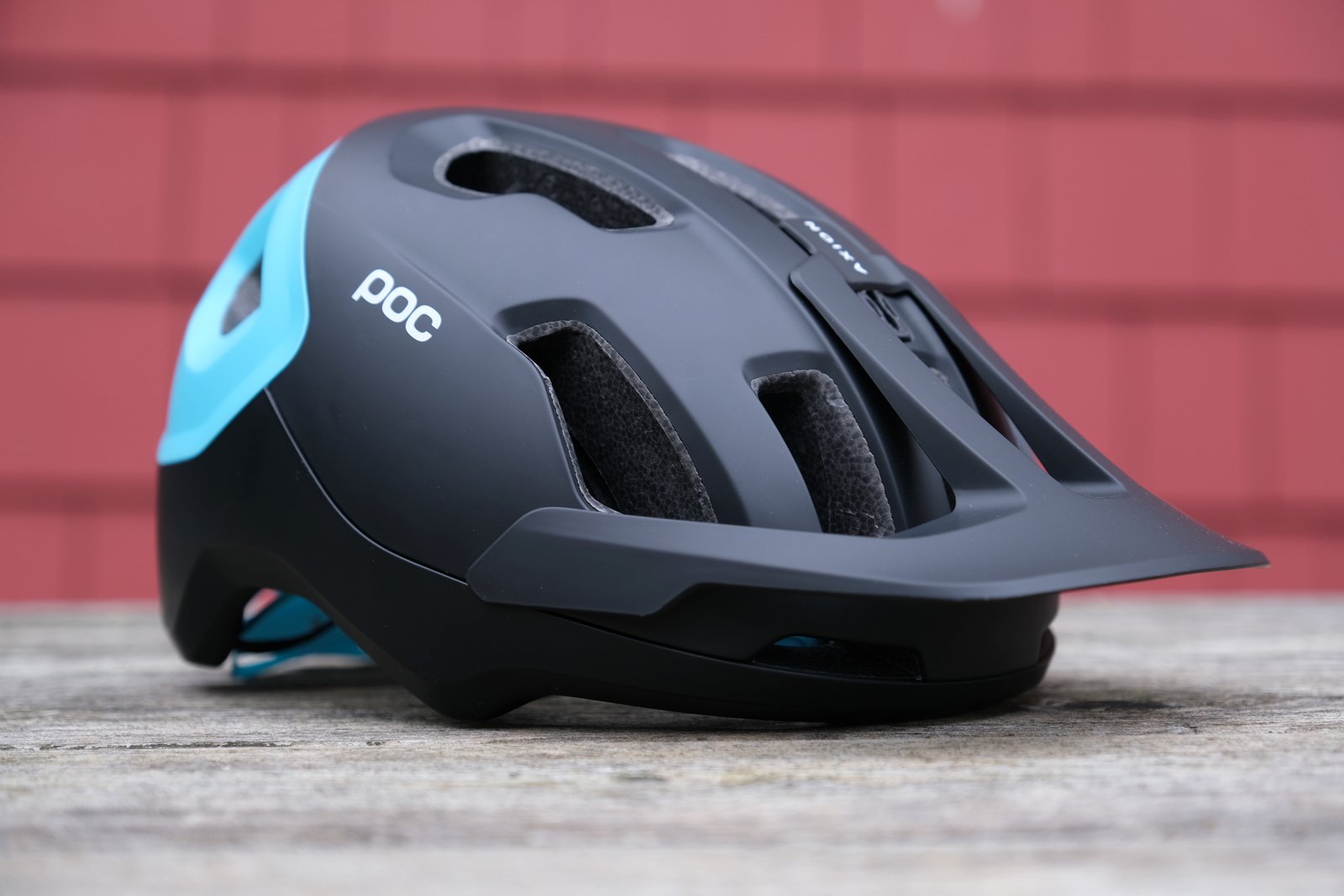 This helmet has been on my head for at least 90% of all bike rides I've completed in the last year. It's a great bloody helmet. All of the positive attributes remain, and the biggest issue I had (slippery straps) feels like a total non issue. I still feel really positively about this helmet and (high praise coming) I no longer feel the need to look for new helmets when I snoop around Cam's room full of bike stuff. There's just no need.

The helmet has a tonne of mileage, and a few weeks back the spin pads started to fall apart. It isn't unusual for pads to give out, especially after this amount of use, but it left me feeling disappointed that I might have to start auditioning other helmets. But then, with a bit of research, I discovered that POC has a pretty great parts supply available from their website. New spin pads for 35 CAD! Which, of course they should, but still, it's really fantastic that Poc makes these, and other, parts easily available to extend your investment in a 240 CAD helmet. The new pads showed up, plugged right in, and hopefully I now have (at least) another year of trouble-free use ahead of me. 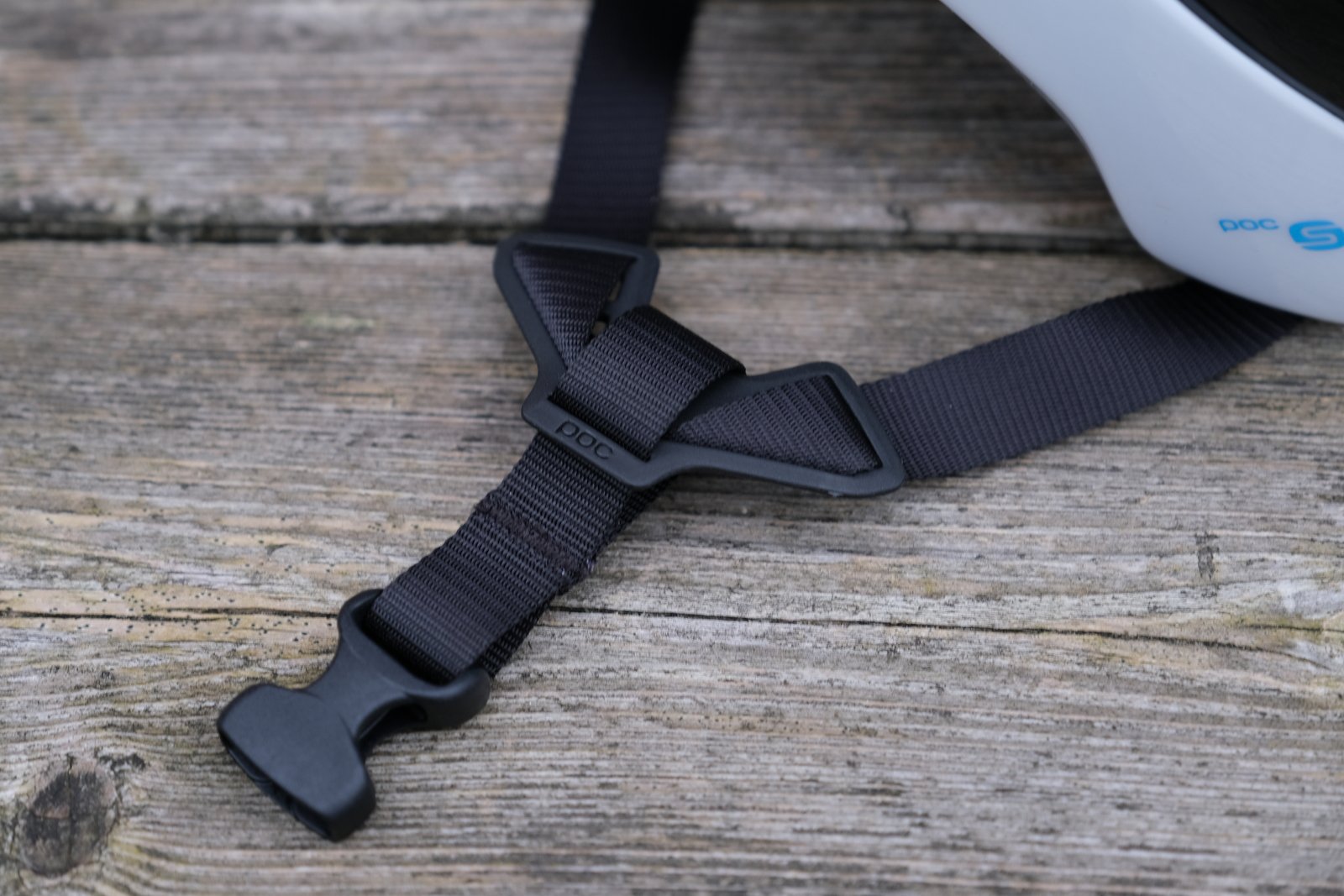 The strap material is quite thin and the buckle adjusts very easily, but long term I've had no issues with things loosening up while I ride 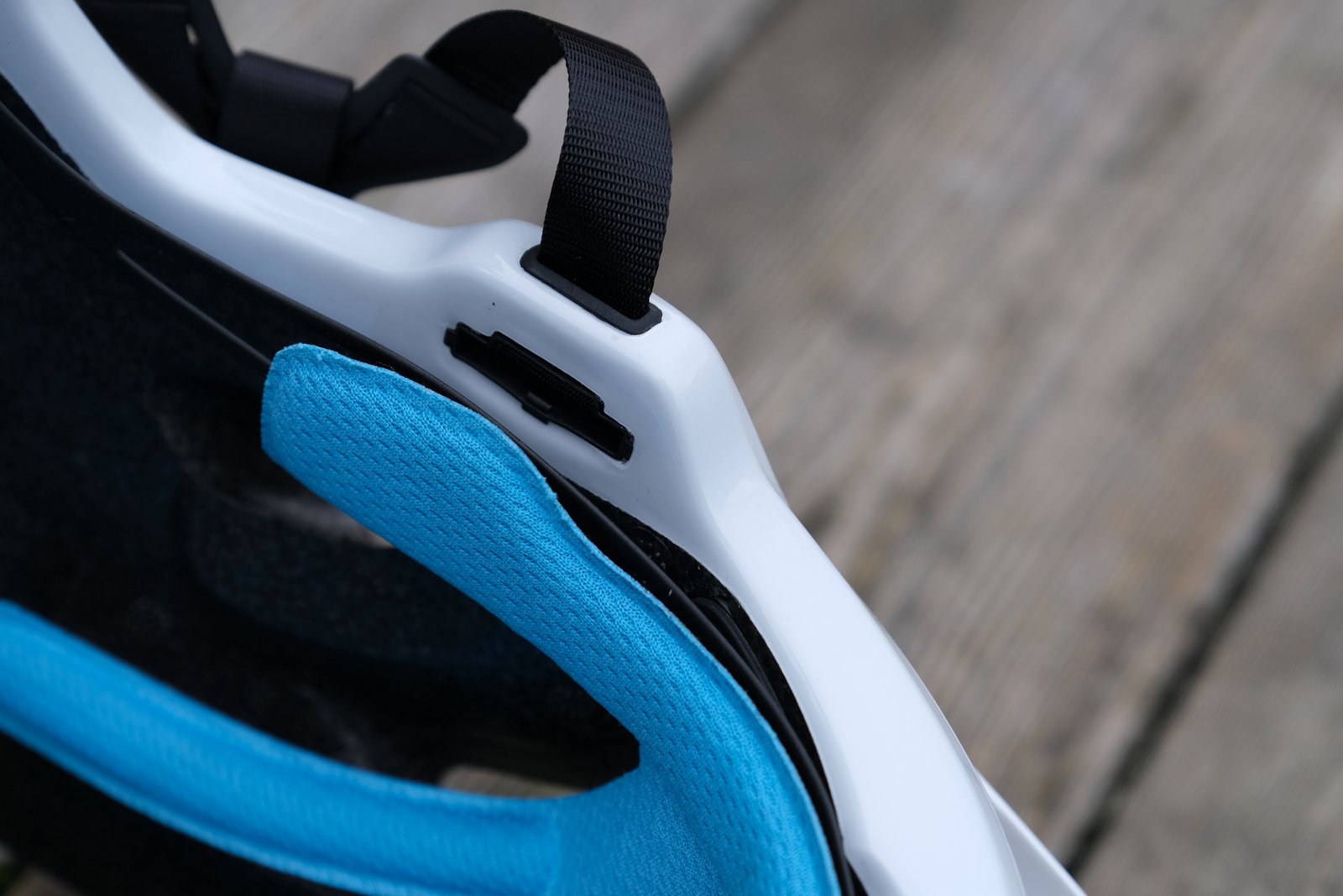 The Spin pad started to peel away a bit in the corners, but the replacement slapped right in

While the Tectal Race hung around because I used it all the time, the Axion hung around because it was a nearly brand new helmet with one glaring issue. But, since I was poking around for new POC parts, I thought I would see if I could fix the problem I had with the Axion spin. Buried in the fit gizmo was a tiny little black star wheel that seemed to be the root cause of my challenges. It seemed to not be sized correctly to engage with the outer housing, and therefore wouldn't stay put. In reading some later reviews of the helmet, my suspicions were confirmed that this was only a problem with my sample helmet, not the later production models. Well, more good news from POC, they'll sell you the whole adjustment system for $15! So I ordered up one of them, too.

When it showed up, it was pretty easy to pop the old fit system out, and pop a new one in. I also decided to see if I could make the old one work by cannibalizing the new one for the parts that I needed, and just by swapping in the new star wheel, everything worked fine. A new helmet for 15 bucks!

So, all of my caveats from my original Axion review have been solved. This is a great helmet with most of the features of the Tectal Race but for $70 less. Once you're riding, you'd be hard pressed to feel a difference between the two. The visor is a little bit cheaper, and there is no goggle strap, but beyond that, they're more similar than different. 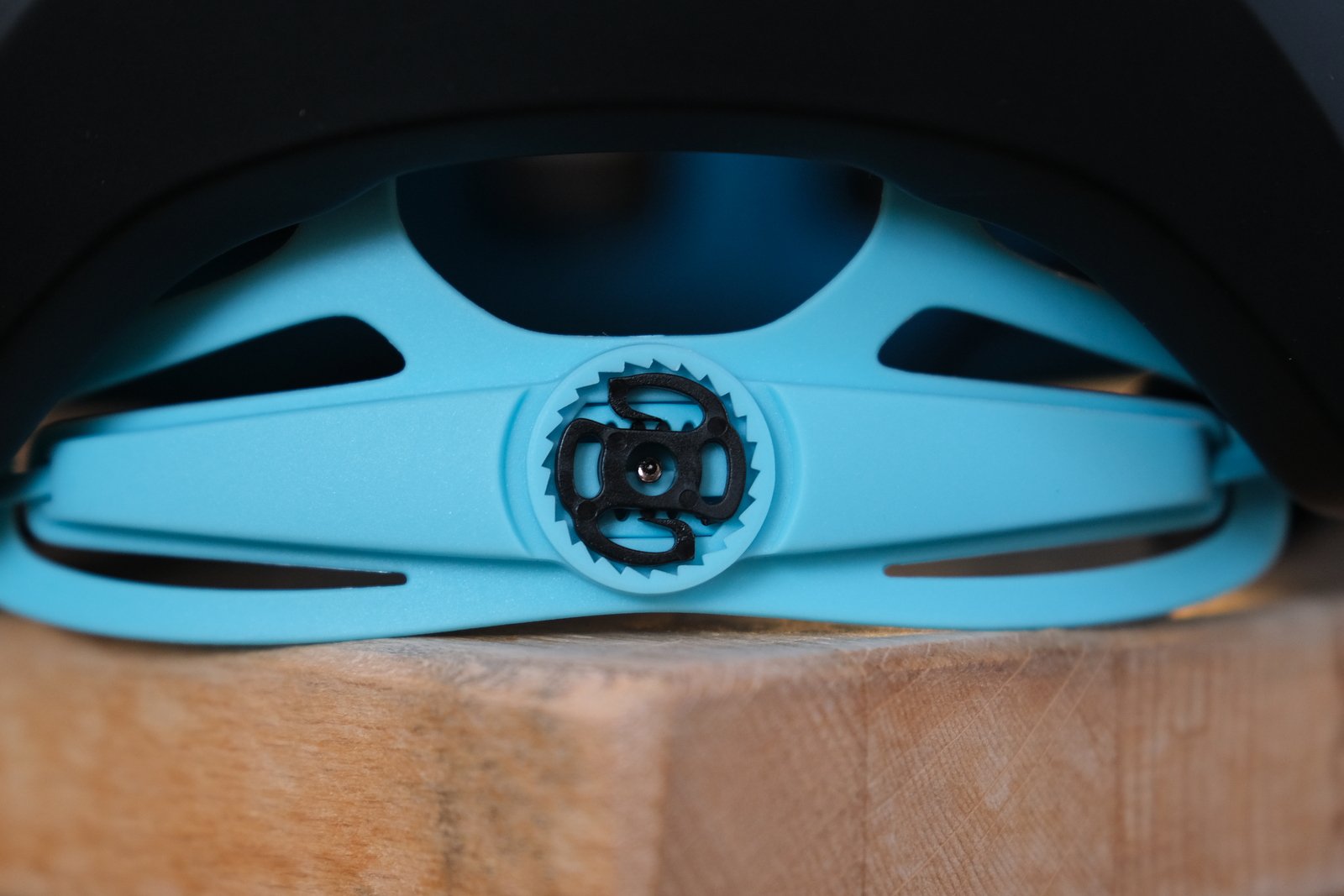 This is the original little star that caused all the problems. 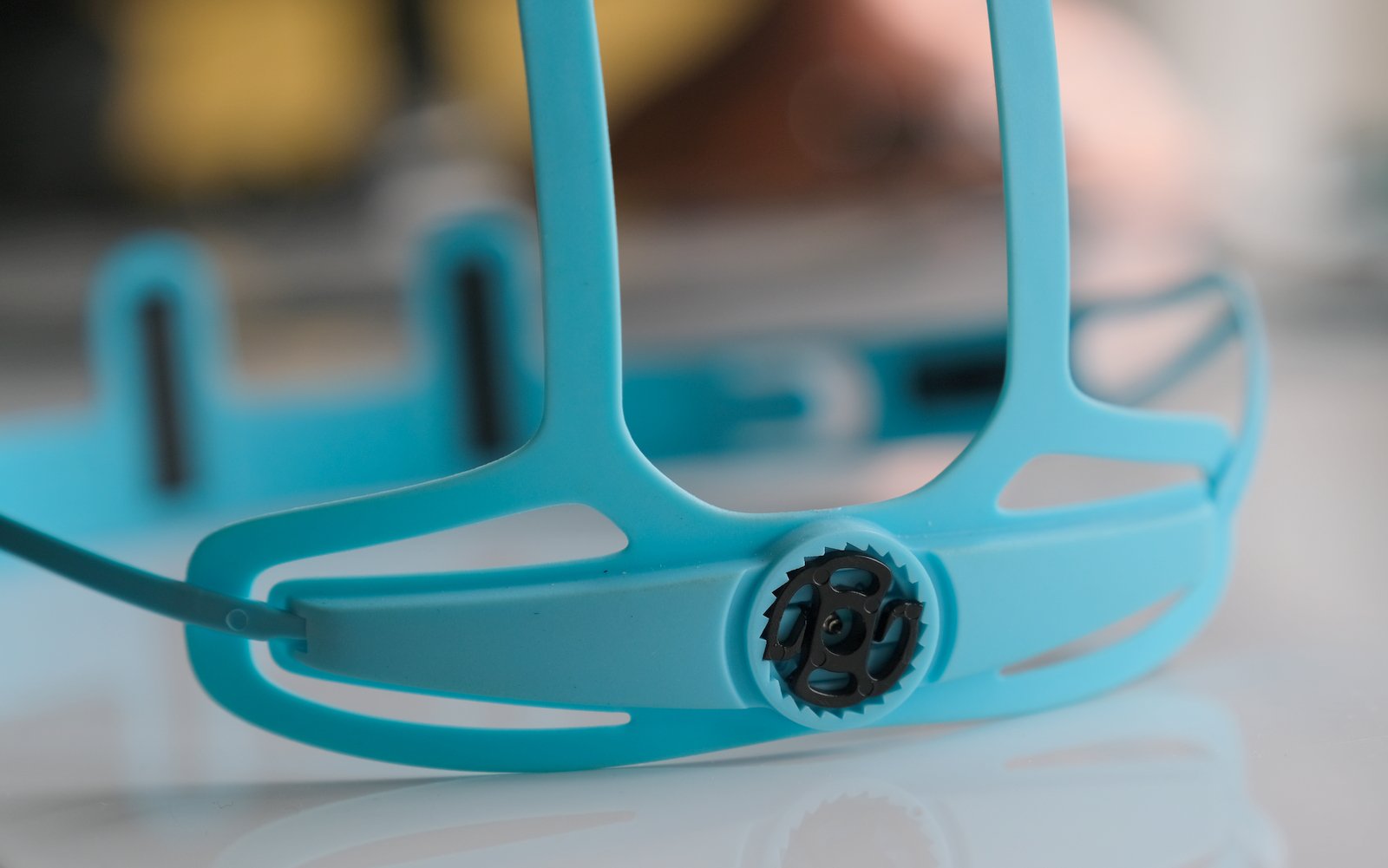 The new one in place on the fit gizmo. 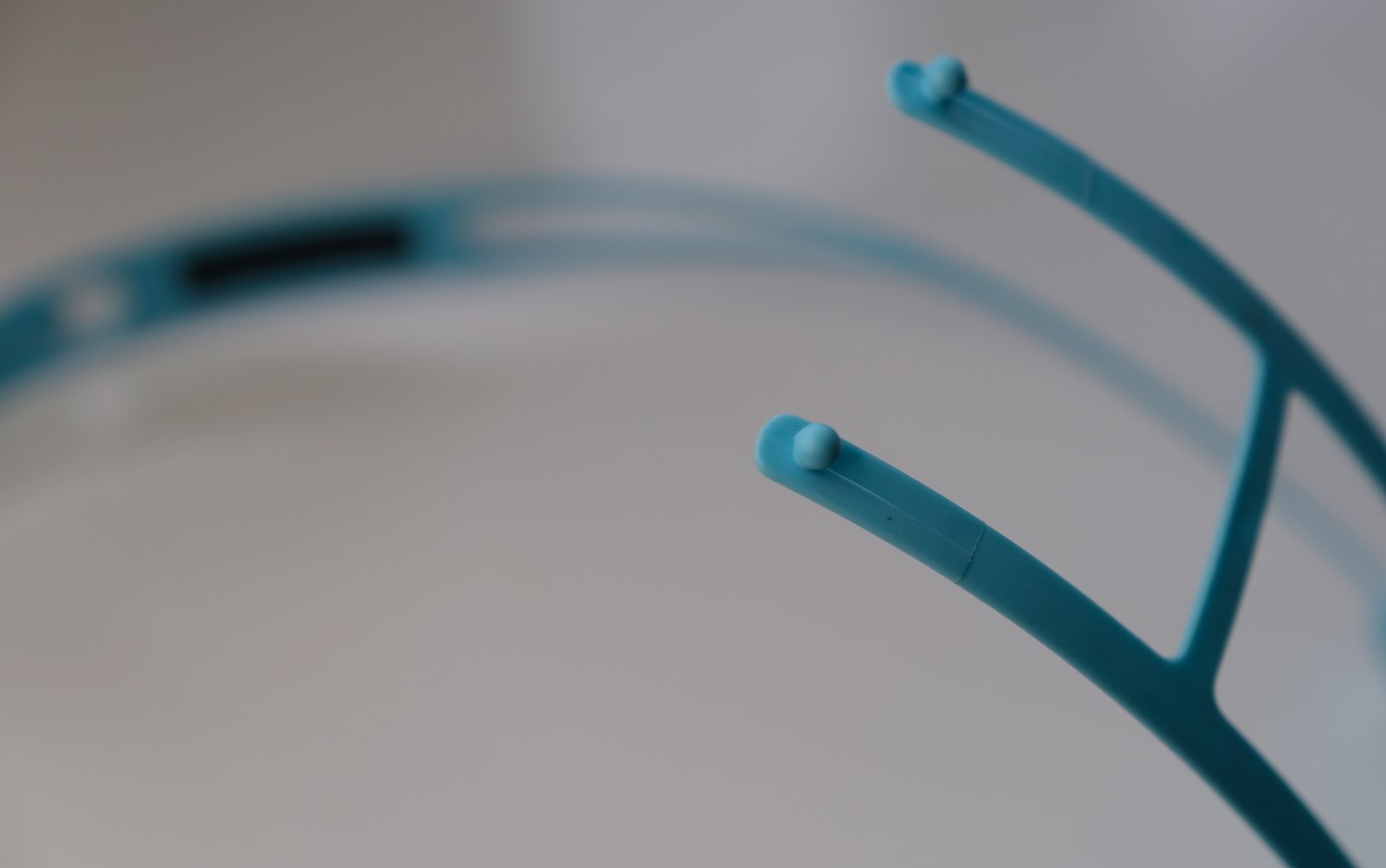 There are 4 little snaps that hold it in place. 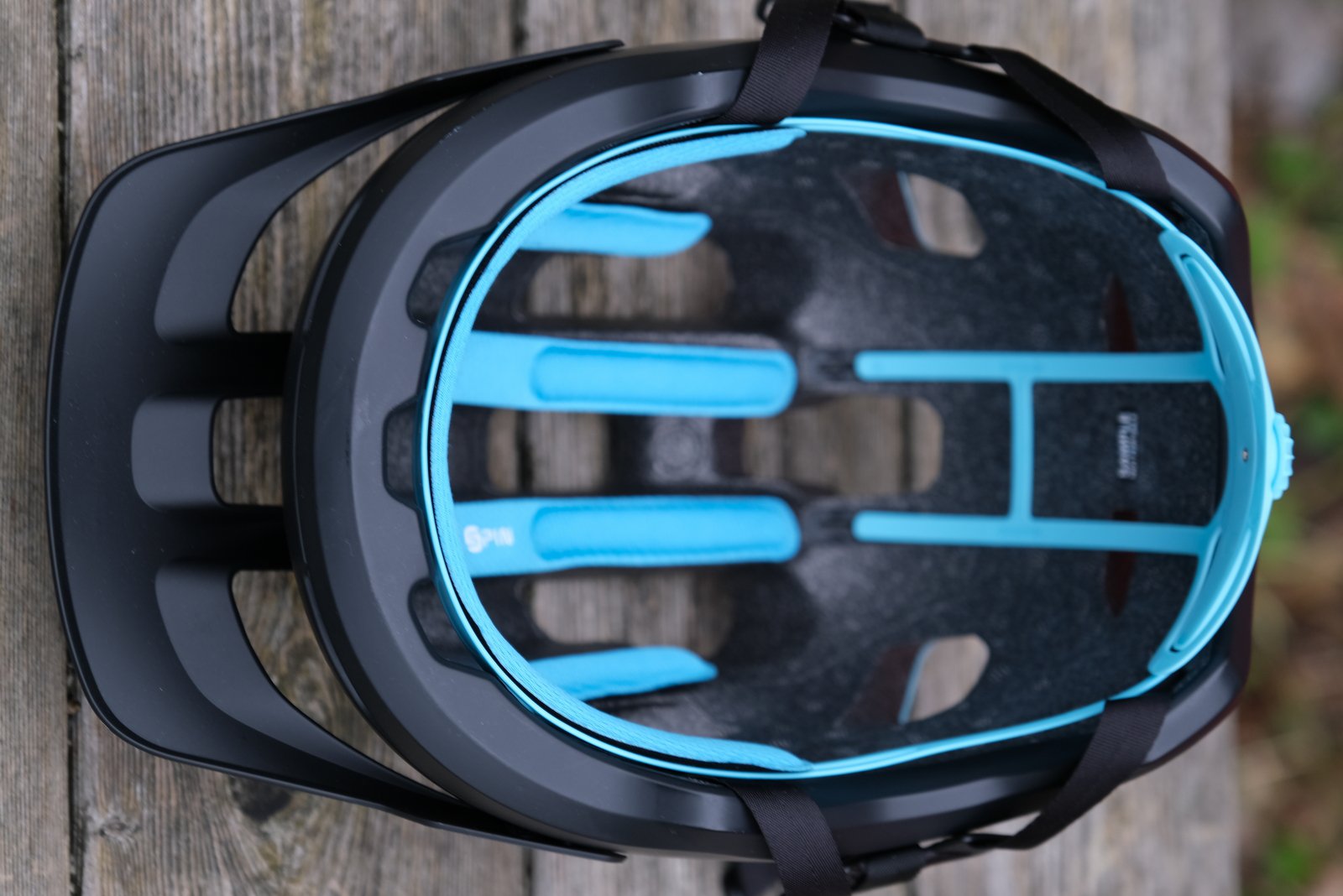 I think this is the heart of why the POC helmets fit so well - there isn't much between your head and the shell.

I still really like these helmets. The readily available spare parts make them that much better and go a ways towards justifying their premium price tags. All helmet companies should do this. Troy Lee Designs has a similar assortment of stuff available, but it seems like most other major helmet companies don't (or least don't advertise the fact or make it easy). It's somewhat crazy that a manufacturer offering easily accessible spare parts to keep things rolling along is a feature to get excited about, but here we are. I've spent enough time riding in helmets with partially de-laminated pads to think that I can't possibly be the only person that feels the same way.

I love it when you can buy spares for $$$ gear for a reasonable time after the purchasing the item. Good job POC.

Long Term Follow-up reviews rock.  It is something So simple, but easily offers the most value to the reader/user (kind of like readily available replacement parts).

POC was great with me. I had a little tear in the MIPs liner of my Trabec back in the day. They sent me a whole new helmet because they revised the design. Granted that was before their last buy out, but it sounds like their customer service is still stellar. Moves like that get customers for life.

I wanted to share a similar experience with POC. I had some pads delaminating, and the customer service rep responded to my "where can I buy more pads?" with "give me your address, and they're in the mail."

Asked where I cna find replacement velcro pads to fit the liner, same deal, got a bunch of them in the mail.

Glad to read this: I got a Tectal Race Spin a couple weeks ago and have been liking it a lot. Funny enough, I too found POCs parts and ordered new pads already because the only thing I don’t like about the helmet is how much moisture the pads hold on to, which is fine when riding but a bummer when you have to put your helmet back on after a break and it’s cold outside. I’ll bring the second set with me on long days when I can swap pads out at the car. Also nice that I can toss the pads in the laundry and not worry about having them ready for tomorrow’s ride.

Yeah been wearing a tectal spin race for just over a year and it's awesome.

Would love to see POC come out with a lightweight full face.

My trs beck race, prior to the Tectal Spin, fit great, never needed the spare liner pads and fit really well. The reasons I bought the Tectal. The Tectal does not fit well, is really noisy when traveling down the trail, and did not come with spare pads and they failed. Not a POC fan anymore. Was a fairly expensive helmet that is at the bottom of my closet.

Ya, the key to any helmet is good fit.  If it doesn't fit you, doesn't matter how fancy the helmet is.  Curious by what you mean by "noisy travelling down the trail"?  Like...it bounces around?  I certainly haven't noticed anything with mine.

Mine fits awesome and part of why I like it so much is because it is so quiet compared to helmets with MIPS liners.

I hear mine when I have earphones in on the way up and ride over technical stuff - sounds like the adjustor on the back of the head rattles a bit.

Had a similar problem with a bell Super DH(pads/liner started delaminating). My LBS said they couldn’t get a new padding/Liner. So my $400 super DH was essentially useless. I kept riding it and eventually smashed my head into the ground and replaced the whole helmet but I do wish I could have bought new pad/liner. Maybe I wouldn’t have crashed if the liner was still in tact.

It's crazy that we've been trained to accept such crappy parts support for so long.  I didn't even think to look for small parts.  The Poc rep pointed me at it!  Same with bike small parts.  For how long was it a struggle to find bearing kits and all of that?  Now, companies are finally catching on and making these things easily available.  I think it's a huge selling point.

With bearings you can pull them out and measure them, unless it's a custom part (looking at DT Swiss and the 1526 bearing in the 1501 gen2 wheelset...). Custom parts are another thing. I really don't like Shimano brakes since if anything goes wrong, you replace a caliper or a complete lever. Well don't even want to try them, mostly because of their lack of modulation and wandering bite point, but this serviceability is a big part of it all. Sram is better in this regard. But not great, they've dropped the ball when it comes to suspension spare parts compared to a few years ago. But at least they have service manuals!