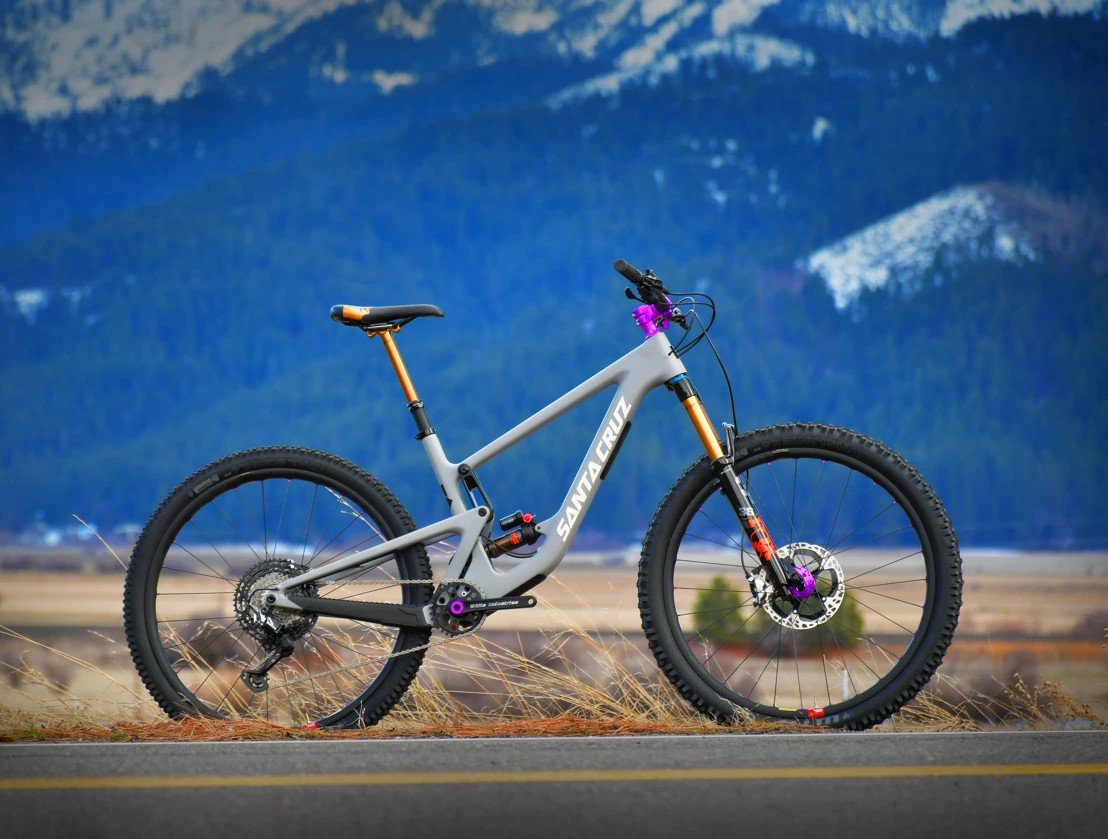 The Sierra Buttes Trail Stewardship (SBTS) today announces the popular ‘5 Bucks a Foot’ Fundraiser is back with a chance to win a customized Santa Cruz Hightower bicycle (Size Large). With the current bike shortage, it is nearly impossible to get your hands on a new bike, especially a one-of-a-kind Hightower. 100% of your donations will directly benefit the SBTS.

Good news for international supporters, ‘5 Bucks a Foot’ is open for anyone worldwide, with shipping provided courtesy of BikeFlights. And the most important part, those who donate and contribute dollars to help fund grant matches see these projects to completion.

The ‘5 Bucks a Foot’ program helps the funding for the construction of non-motorized trails. Thanks in part to these funds, Sierra Buttes Trail Stewardship is working on and has completed numerous milestone projects, including: 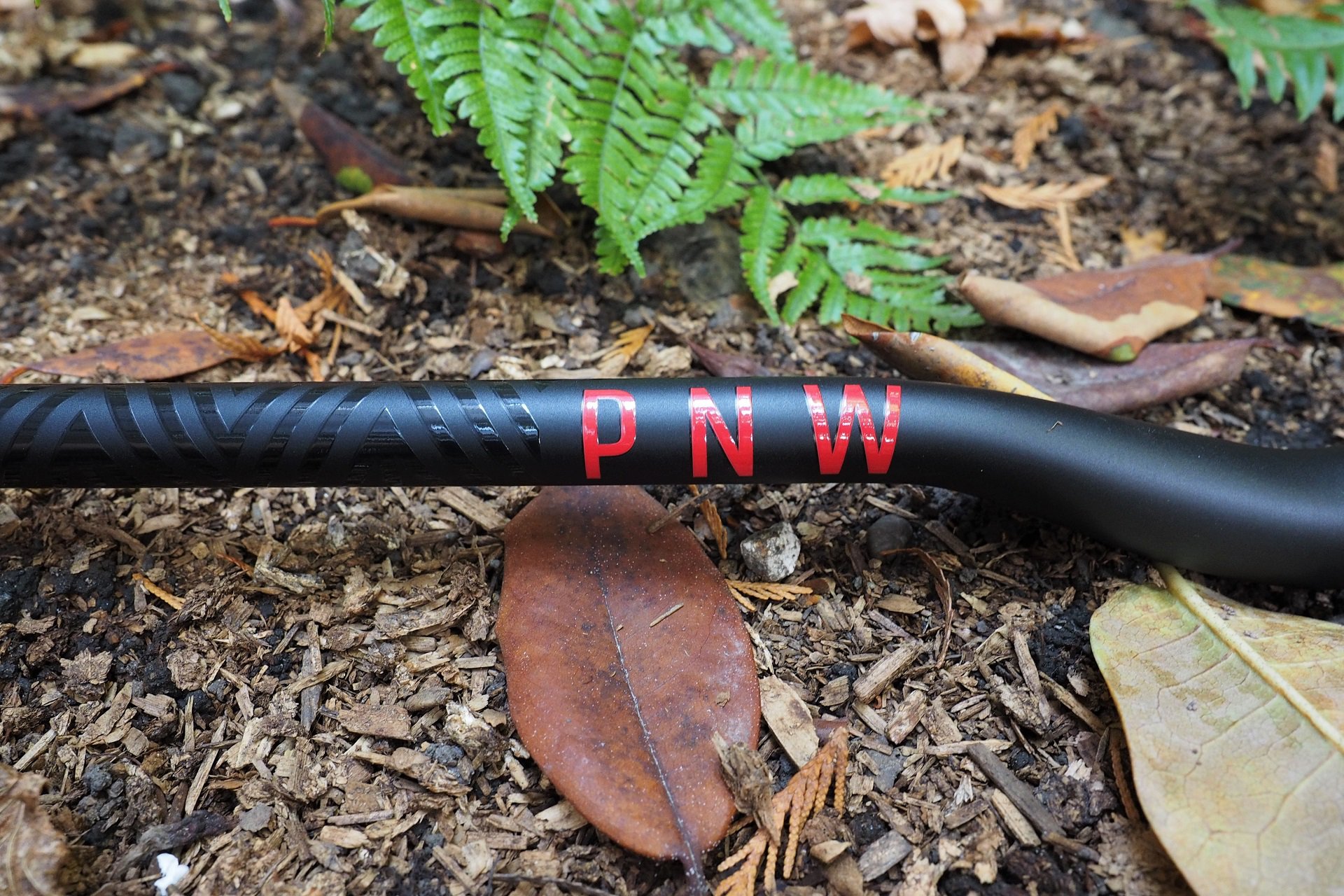 PNW Components has announced they will pause all future business with Amazon until further notice. In an effort to better serve customers and keep dollars inside the industry, the decision will positively impact independent bike shops and retailers.

After a year of incredible demand and an overloaded supply chain, PNW recognizes that they will continue to have limited supply and need to prioritize the sales channels that best benefit riders. The expertise, experience, and personality of industry experts at bike shops can’t be replicated on Amazon, leading them to make the change they have.

“We’ve learned the best way to support our customers is to ensure they have the information and resources needed when making a purchase. Not only is this best for our customers, but it is good for business, too, as it minimizes returns that result from confusion on which spec to choose at the point of purchase,” – Aaron Kerson, Co-Founder and CEO of PNW.

To ensure the entire PNW Components supply chain is aligned, PNW has worked with their network of retailers to pull all products from Amazon across the site. Previous inventory dedicated to Amazon will be re-allocated directly to bike shops and retailers.

At a time when independent bicycle retailers are struggling to get enough inventory to support their businesses, channelling the revenue previously generated through Amazon into those retailers will help ensure the long-term health of PNW's partners. To account for Amazon Prime customers who buy from Amazon for free shipping, PNW has lowered their threshold for free Expedited Shipping and now offers free 2-Day shipping within the contiguous USA for orders $40 or more. 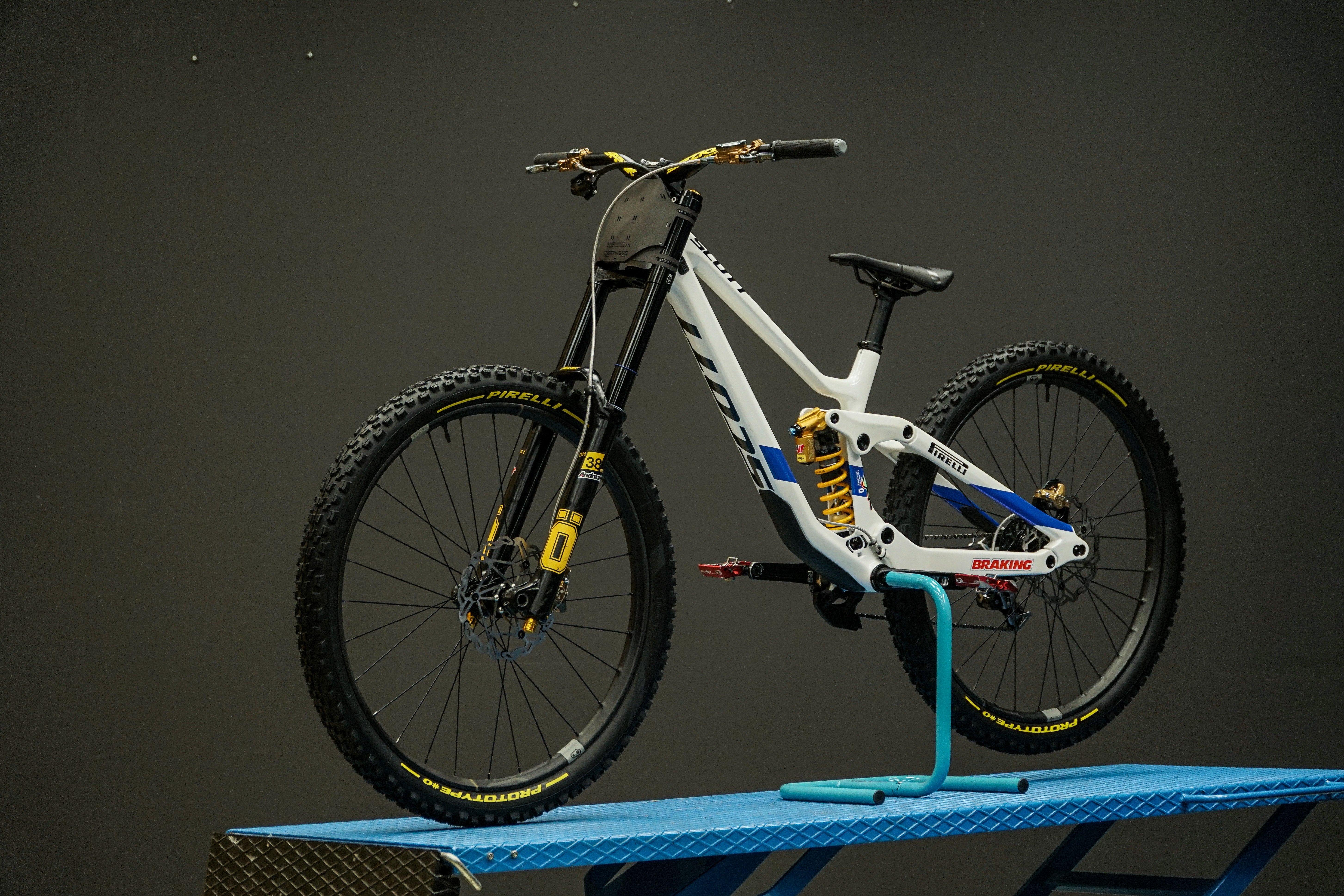 Rogue Racing is a recognized and consolidated force in the Italian downhill scene. Born in 2013 from the experience gained after years of competition in the motorbike field, in 2014 it also opened its doors to the MTB Downhill sector. With several national successes in various categories, including the Elite category in 2019, the 2021 roster includes Davide Palazzari, reigning Italian DH Elite Champion, who spearheads the Italian DH squad with a number of outstanding performances in the World Cup. He is joined by the young talent Davide Cappello, Italian U17 Champion, who has seen solid results in the Elite Top 10 national ranking. This year, Cappello is debuting in the Junior World Cup.

The Rogue Racing athletes have been testing the new Pirelli Prototype#0 tires and are debuting them on the Leogang World Cup track this week. 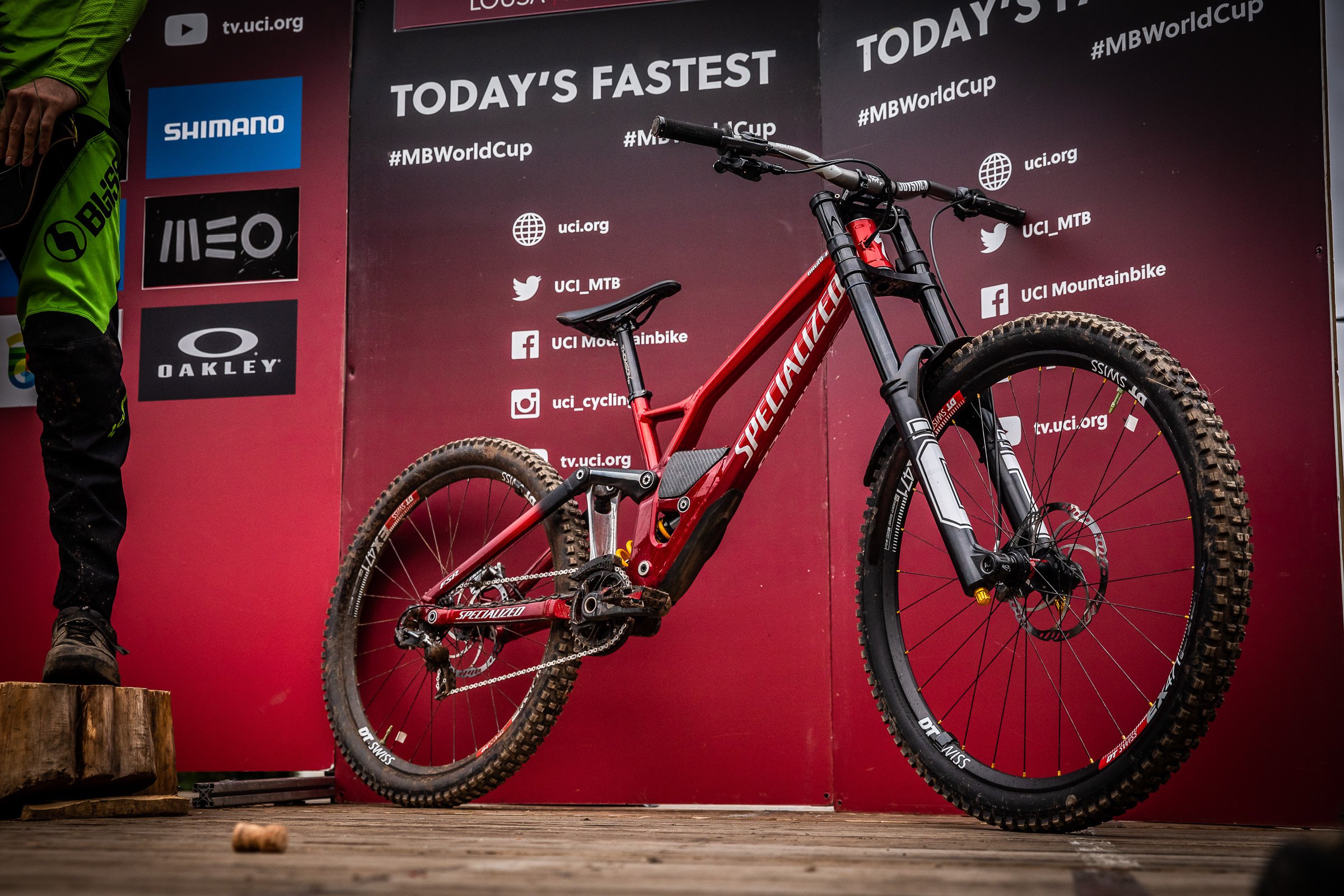 Öhlins suspension to remain on Specialized Gravity's race bikes for another three years.

Öhlins Renews Partnership with Specialized Gravity, Steps Up its Commitment to Downhill Racing

The work we do collaborating with Öhlins provides a real advantage at all of our races. My mechanic and I have a privileged relationship with some incredible technicians and engineers back at the Öhlins factory. This allows us to constantly work on evolutions and improvements to the bike. The chassis is harder to modify, and it takes time, so we really push the suspension to its best. – Loïc Bruni

2021 brings new developments in Öhlins’ ongoing commitment to MTB racing and the gravity scene. Together with Spanish distributor Andreani MHS, the brand has also signed a deal to support the Commencal 21 team. The team will make its World Cup debut at Leogang for the start of the 2021/2022 World Cup DH season. Spanish riders Ángel Suárez (DH National Champion) and Pau Menoyo (Junior DH National Champion) will ride Öhlins as part of an ambitious outfit that aims to build towards a UCI World Cup and World Championship win.

Both Specialized Gravity and Commencal 21 will provide valuable feedback to Öhlins’ development team throughout the upcoming season. Performance improvements aren’t reserved for the pros though, and Öhlins say they're committed to bring improvements found on the race track to the Öhlins' products available to consumers.

Öhlins also says that while performance matters, it isn’t just for the racers. Alongside their high-profile riders, Öhlins is also proud to be joined by a host of big name riders and legends of the MTB community, including Fabio Wibmer, Nico Vink and Kilian Bron, just to name a few. 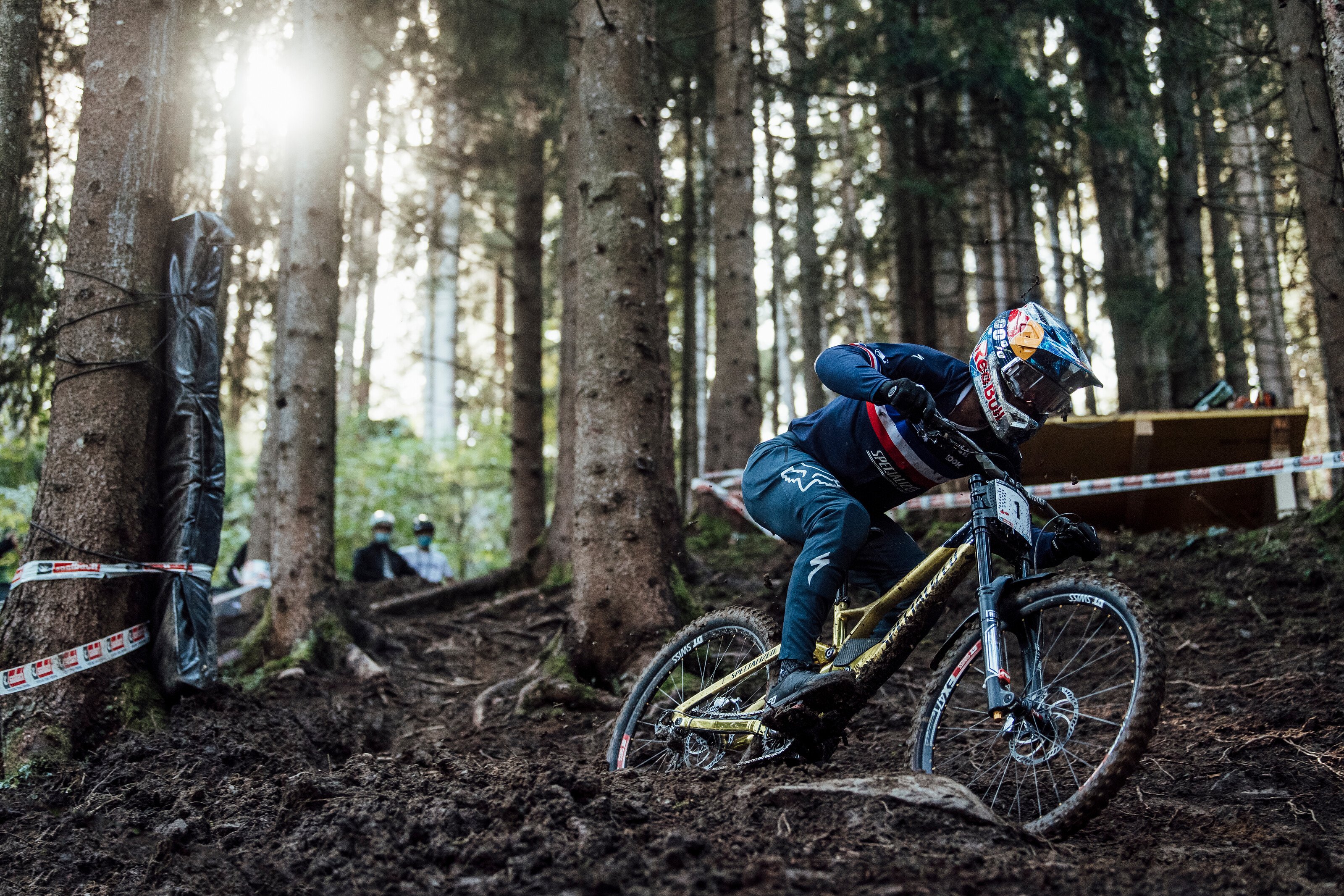 The 2021 World Cup Downhill season kicks off this weekend in Leogang, Austria. The track is essentially the same as the 2020 World Champs track, and despite the race being held in June, conditions in the steep wooded section don't appear much better than in the snow and rain of 2020. The forecast for the weekend is for classic mountain weather – ever-changing with a bit of everything in a day.

Watch all of the action live on RedBull T.V. Action is set to kick off on Saturday morning at 330am PST with the Elite Women. The Elite Men's racing is scheduled to start at 445am PST. 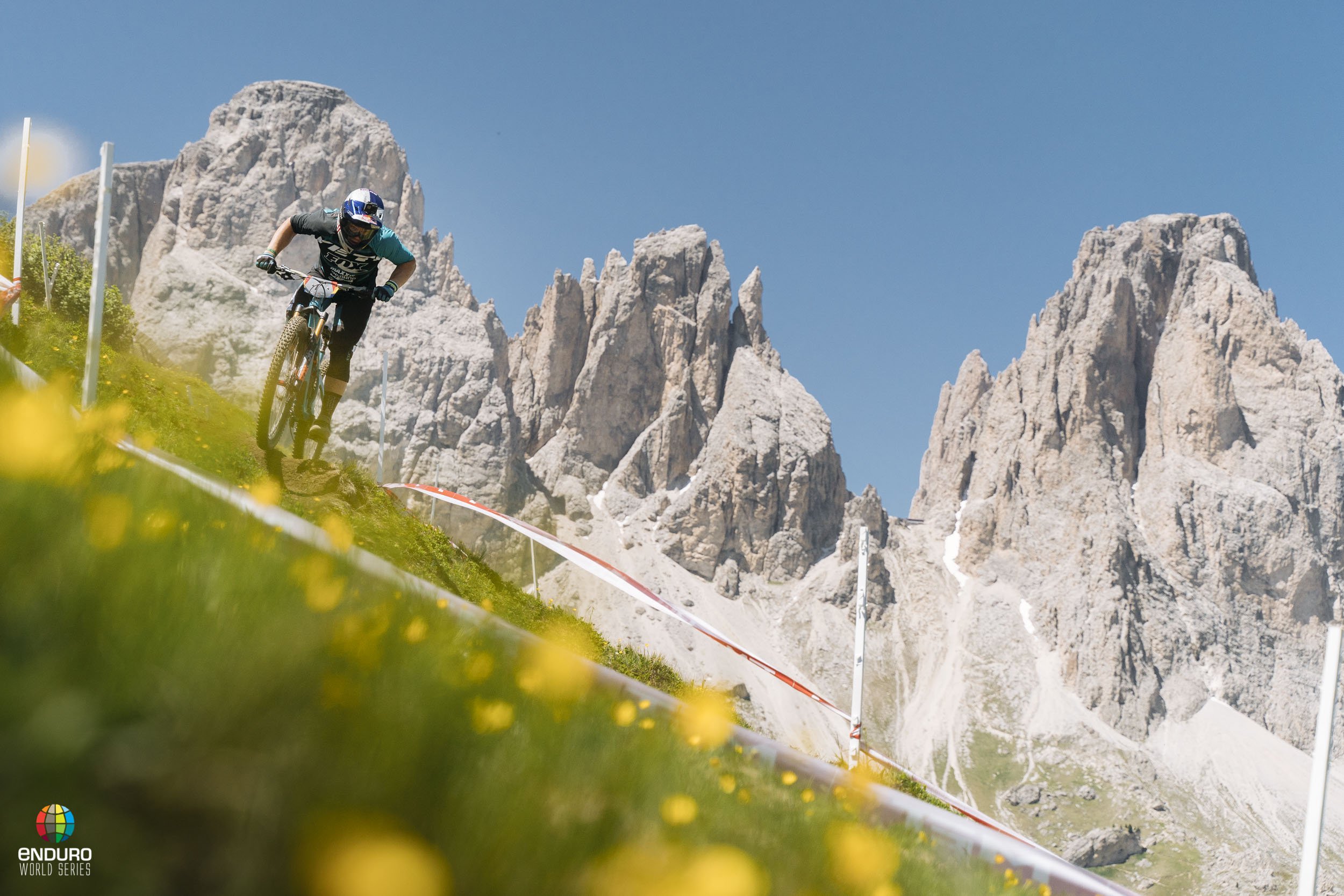 The Enduro World Series (EWS) launches its most ambitious calendar to date, with 2022 scheduled to host the biggest calendar in the history of the sport. The 2022 season will consist of 11 EWS races, five editions of EWS-E and the return of the iconic Trophy of Nations team event, promising more racing, more venues and more action than ever before.

The season will kick off in March in the wilds of Tasmania in Maydena, the first of four new venues to feature next year. From Tasmania, racers will remain in the Southern Hemisphere for round three, landing in Nelson, New Zealand for the first time in the history of the sport. From New Zealand, the tour heads to the UK’s most famous riding destination, Scotland’s Tweed Valley, kicking off the second block of racing in June with an international race festival hosting round four of the EWS and the first round of EWS-E. From here the series stays in Europe and heads to the border-hopping venue of Petzen-Jamnica in Austria and Slovenia for round five, with the area making its second EWS appearance, and this time around it will also host round two of EWS-E.

Round five of the EWS will head to the Italian Dolomites and back to Val Di Fassa, a venue that has firmly cemented itself as a modern classic and a calendar highlight. Closing out this leg of the European rounds will be none other than Valberg in France, a stunning venue in the French Maritime Alps that was last on the calendar back in 2016, but this time around it will be the EWS-E racers who take on the region’s famous grey earth.

The third block of racing will see the series head to North America in August, where the riding mecca, Whistler is first on the menu. After Whistler racers head to the USA for rounds nine and ten. Burke in Vermont and Sugarloaf in Maine will mark the first time the States has hosted back-to-back EWS racing.

September will see racers and teams head back to Europe to decide both the EWS and the EWS-E Series Champions. First up it's Crans-Montana in Switzerland, which will host both the penultimate round of the EWS and EWS-E amongst some of Europe’s highest peaks. From here the EWS heads to Loudenvielle for the last round of the EWS, where the 2022 Series Champions will be crowned amidst the French Pyrenees. 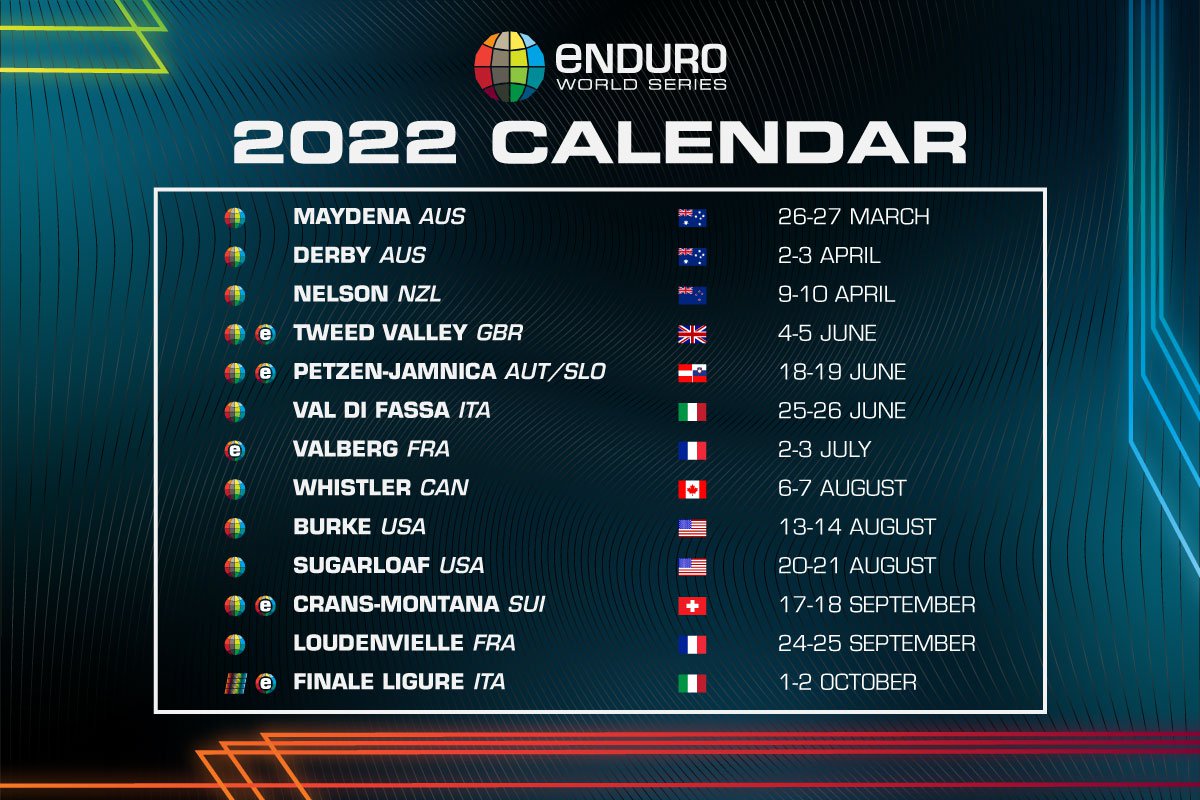 Privateers concerned about cost will have mini-titles within the season to aim for that will also help pro athletes manage injury and we’re back in the USA and in Tasmania not once but twice with epic back-to-back racing. Pro-only, regional focus and the best cadence of an EWS season to date, our team is emerging from a hard time for events and sport with more energy and excitement than ever before. – Chris Ball, Managing Director of the Enduro World Series

The season will draw to a close in enduro’s most iconic destination, Finale Ligure in Italy. In the mountains above the Mediterranean Sea, the 2022 EWS-E series champions will be decided on the region's vast trail network. And there’s still one more race after that – the all-important Trophy of Nations, mountain biking’s biggest team competition, will make its return. Riders will cast aside individual glory as they compete in teams of three for their home nation in pursuit of those hallowed UCI jerseys.