The Pivot booth at Interbike was very busy. It appears the brand is getting so much traction on certain models it’s surprising even those at the company. When you factor in Pivot’s choice of the DW Link suspension platform and company president Chris Cocalis’ attention to detail their apparent success isn’t much of a shocker. The addition of a crew of downhill rippers representing the brand worldwide could be another sign of good things to come. 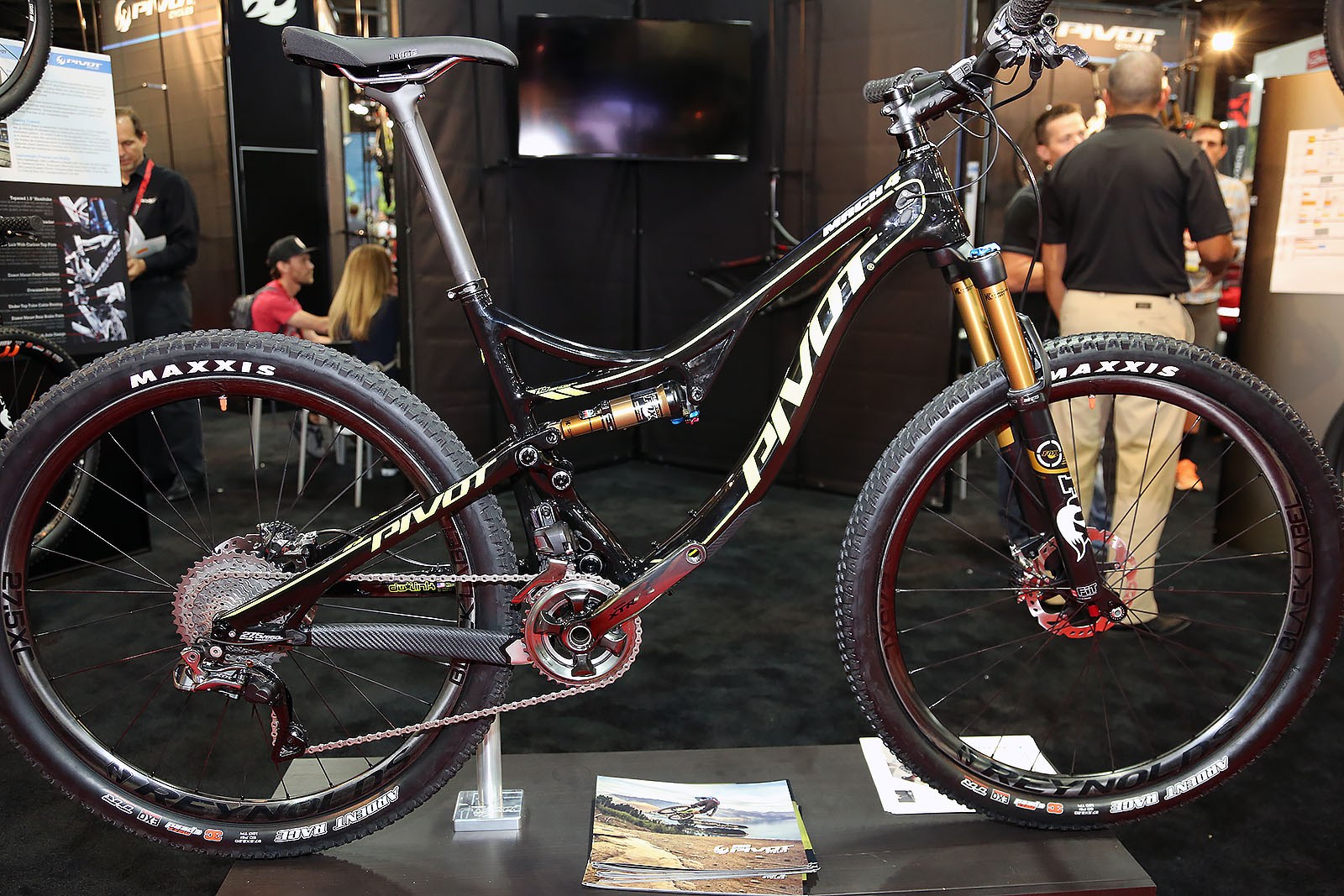 The Pivot Mach 4. Maybe not a bike you would immediately be interested in but it is actually the first Shimano Di2 compatible frame developed. Nestling down by the bottom bracket is an internal battery, keeping the lines of the bike nice and clean. The frame also has all the required ports for clean internal routing. Road bikes have been going in this direction with the introduction of Di2 shifting so it’s obvious that it will happen on mountain bikes too. 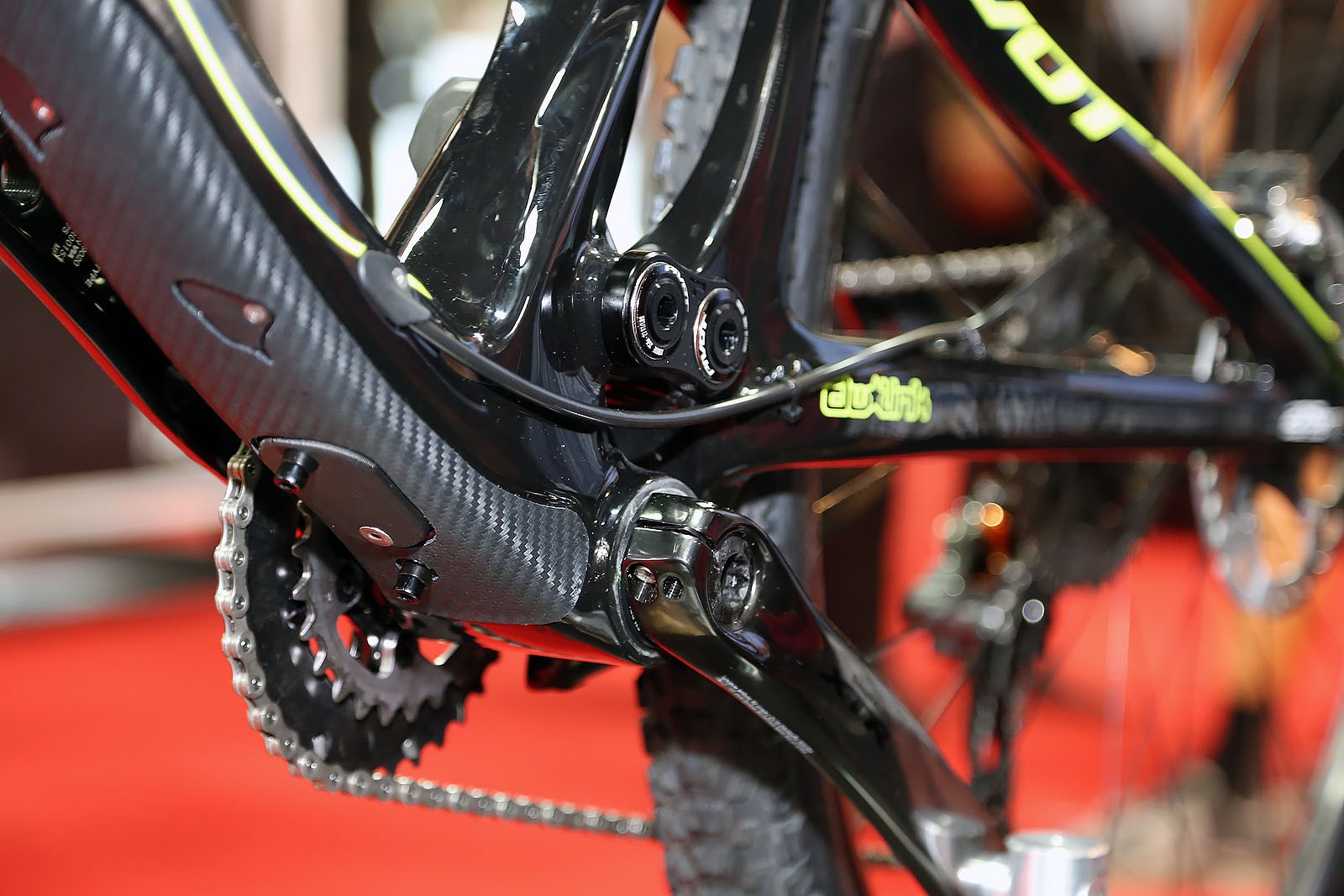 The battery sits under that cover on the down tube in the carbon frame. It certainly was clean execution of an integrated Di2 system. Lisa at Pivot was raving about how the bike rides and is currently trying to get her hands on one.. good luck with that. This bike was drooled on more than most at Interbike this year. 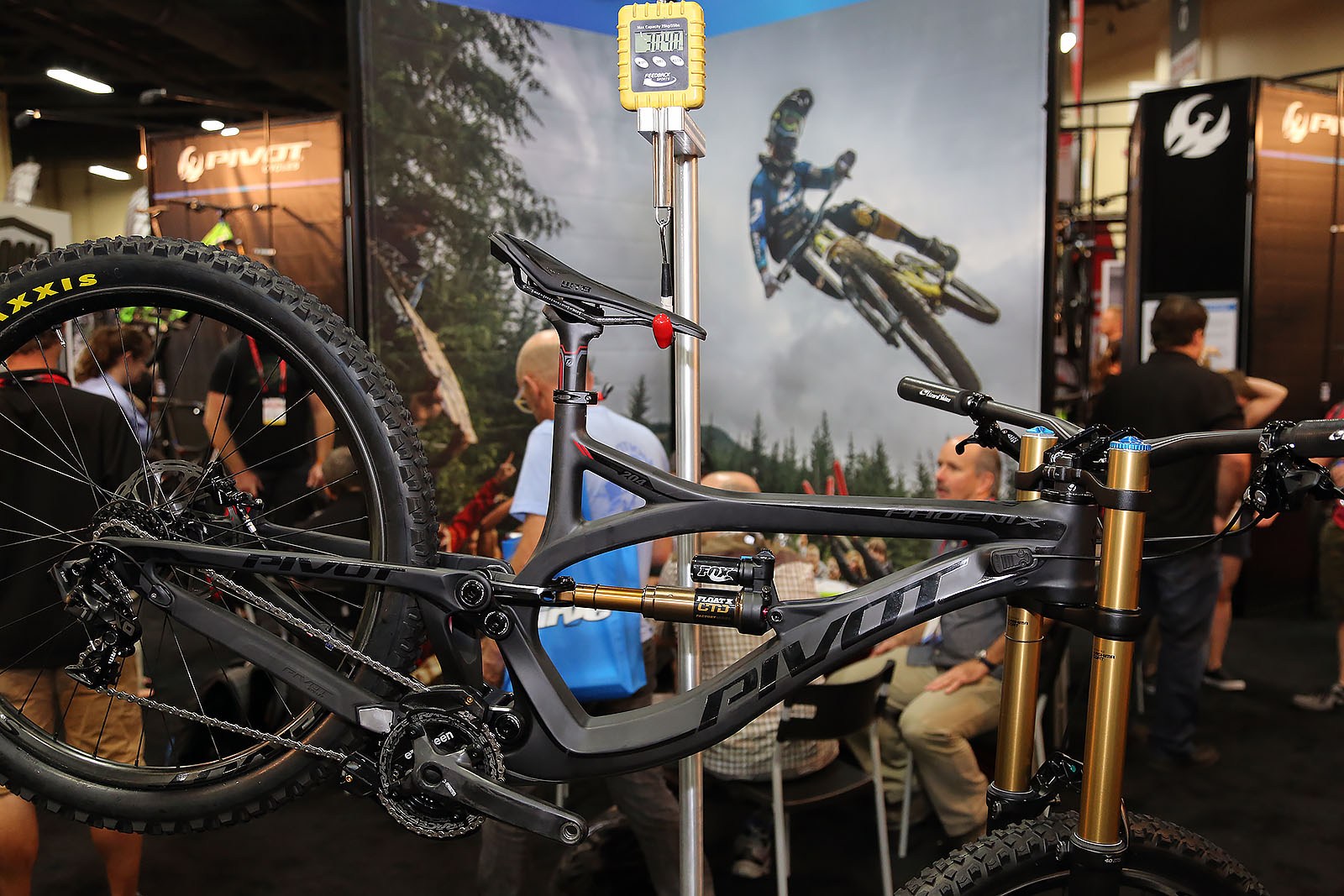 The Pivot Phoenix is the bike that Bernard Kerr, Elliot Jackson and Micayla Gatto rode on the World Cup circuit in 2014. With a frame weight of just 7.1 lbs for a size small frame with an air shock, it is no surprise that this bike can be built up to a lithe 30.4 lbs total weight. With 27.5″ wheels, a hair over 200mm of travel and DW Link suspension, this murdered out beast is something that I’d like to take for a lap or two in the Garbanzo zone. 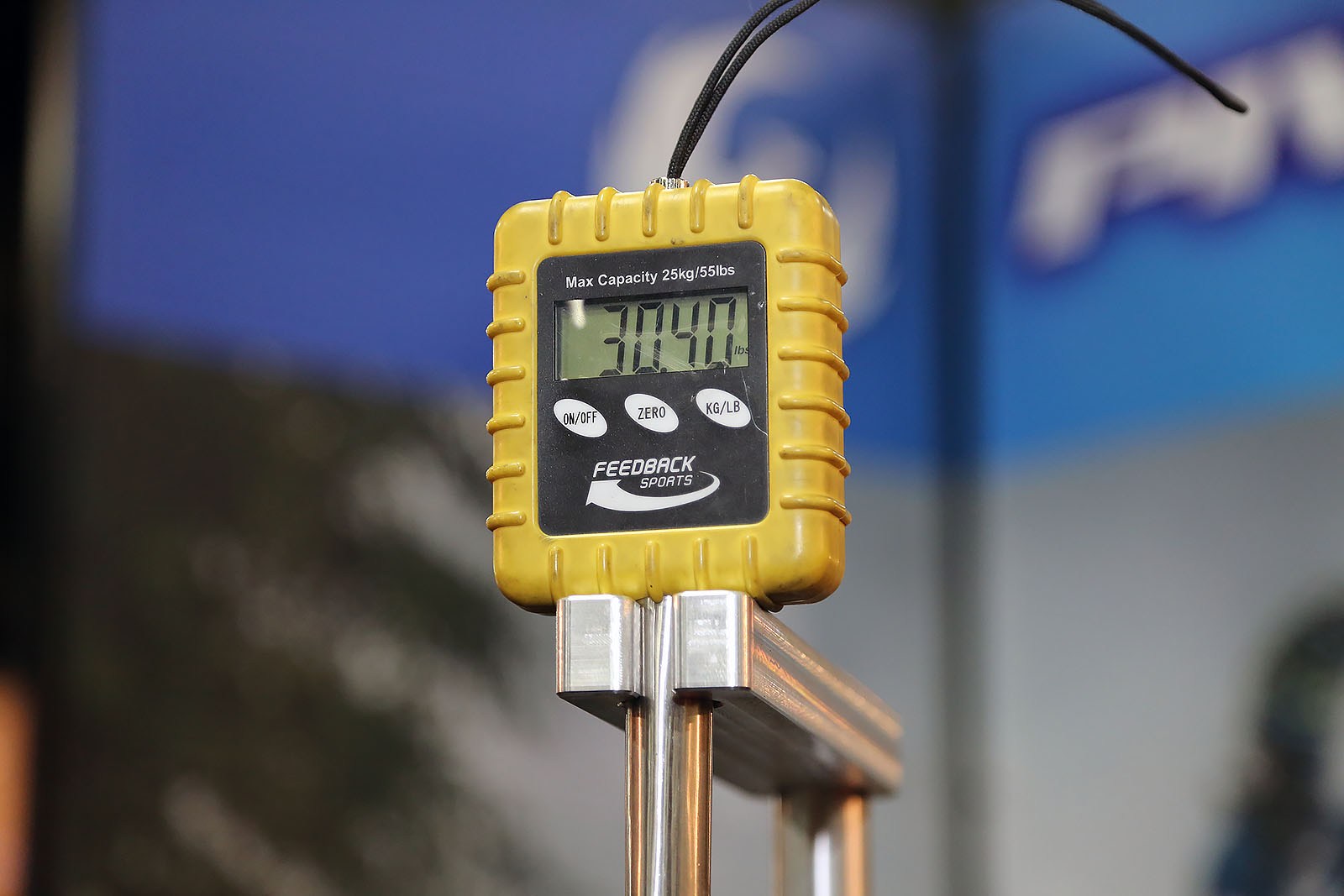 Yes, you read that right, 30.4 lbs. Sure it features a carbon frame, rims, cranks, bars, seat post, but everything on the bike was off the shelf. I’d maybe stump for a coil shock and add a pound in weight but it’s still a feathery downhill machine. Based on how Bernard and Elliot ride it must be good for whips. 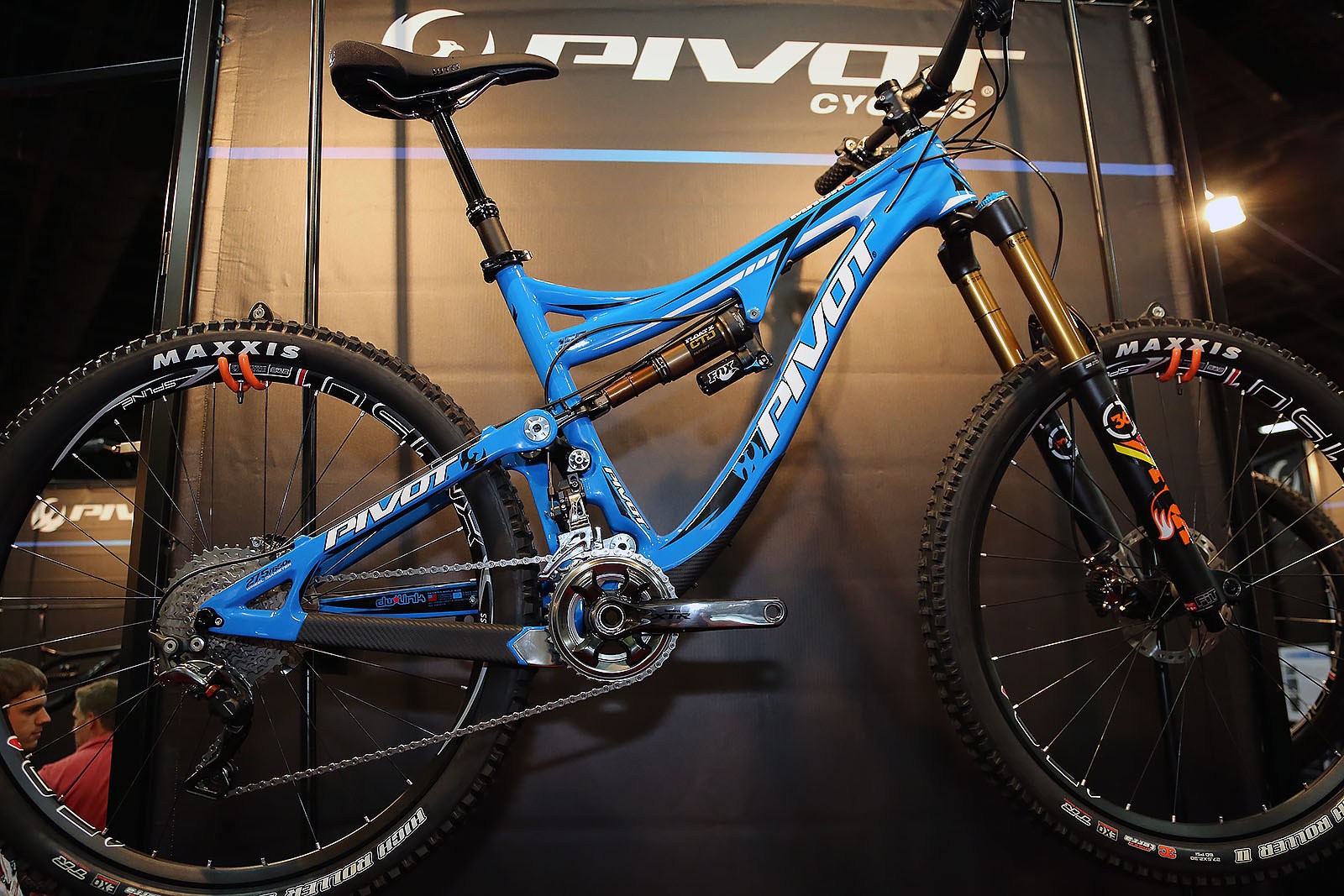 The Mach 6 has been such a big seller for Pivot they’ve had a hard time keeping them in stock. This carbon-framed all mountain/enduro machine has 155mm of travel, the oh so fashionable 27.5″ wheels and every other feature you could want for a bike of this type. The electric blue isn’t the most popular colour choice but I think it looks badass.

We have a Pivot Mach 6 pencilled in for testing soon. We want to see what all the fuss is about for ourselves.

Love Pivots latest bikes. 4c would be a rad BCBR, tech XC/trail bike for our parts. Mach 6 is divine man does that thing move out under power for a 6 inch bike. Hoping the Canadian parts spec is better suited to enduro this year with better wheel specs. Oh and BTW Blue is their best selling color. That 4c show bike is appallingly set up though. Looks like its been made to fit someone 6 inches to big for the frame size or a grandpa, not a racer. Di2 or not they should spend a some time making it look the business that I'm sure it is before showing it off (I still want one though..)

Pretty cool to see about the development process in Tempe AZ.