One of the more iconic trails on Mount Fromme, Pink Starfish, has been declared permanently closed by the District of North Vancouver. In its various incarnations, Starfish was one of the most challenging trails on the Shore. In its early years it was famous for multiple drops to flat of 6 feet or more, challenging woodwork and extremely creative and well-built features. If you wanted to get gnarly Starfish delivered. 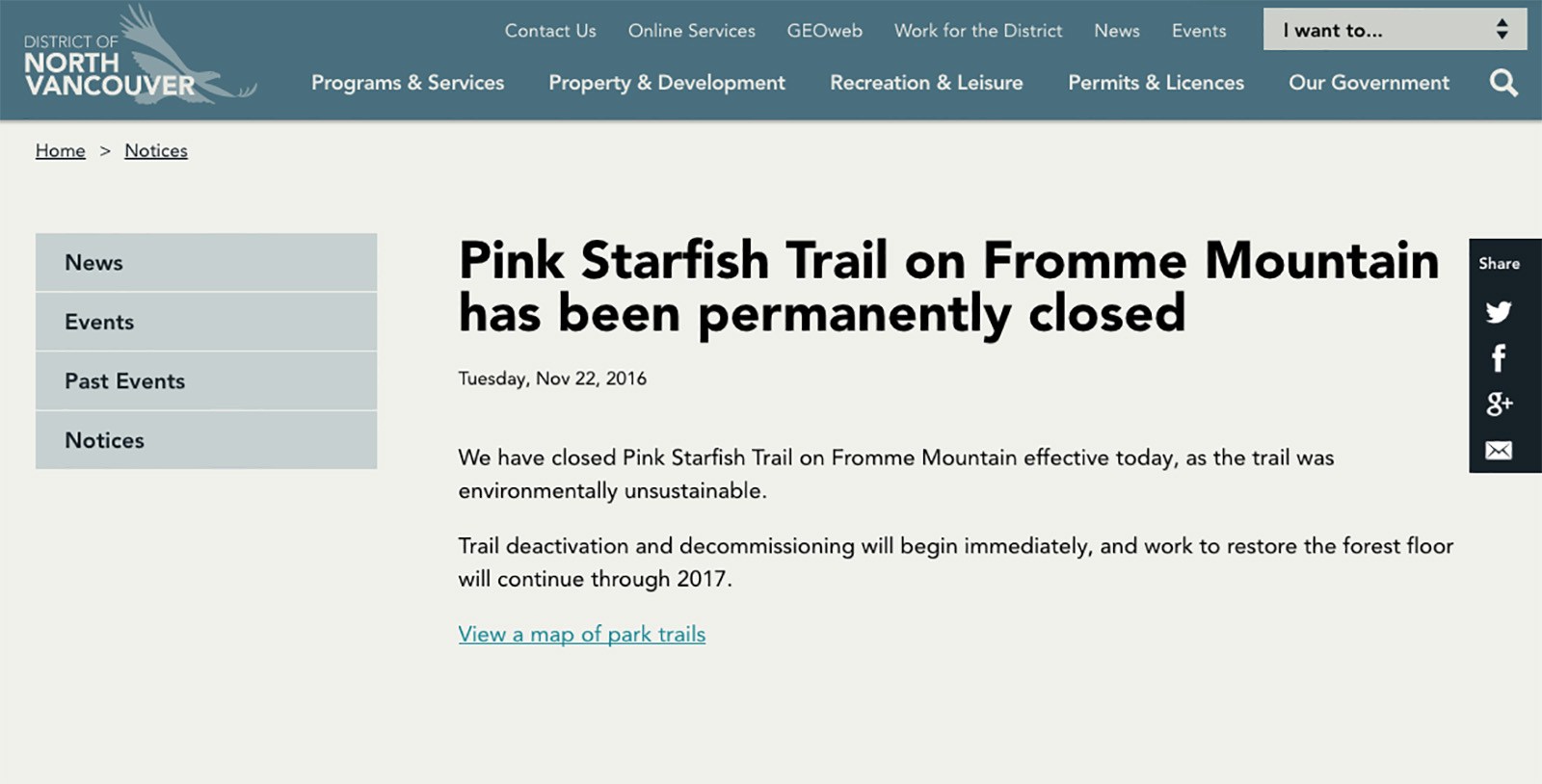 The notice posted on the District of North Vancouver’s web site.

Earlier this year it emerged that Starfish was getting a makeover. Woodwork was being refreshed or replaced under the radar by the nsmba (our local trail association). There was no announcement from the nsmbA about work being done on the trail. It’s possible this was an effort to keep the news from local mountain biking’s most vocal critic, Monica Craver who has made it her mission to ban mountain bikers from local trails. 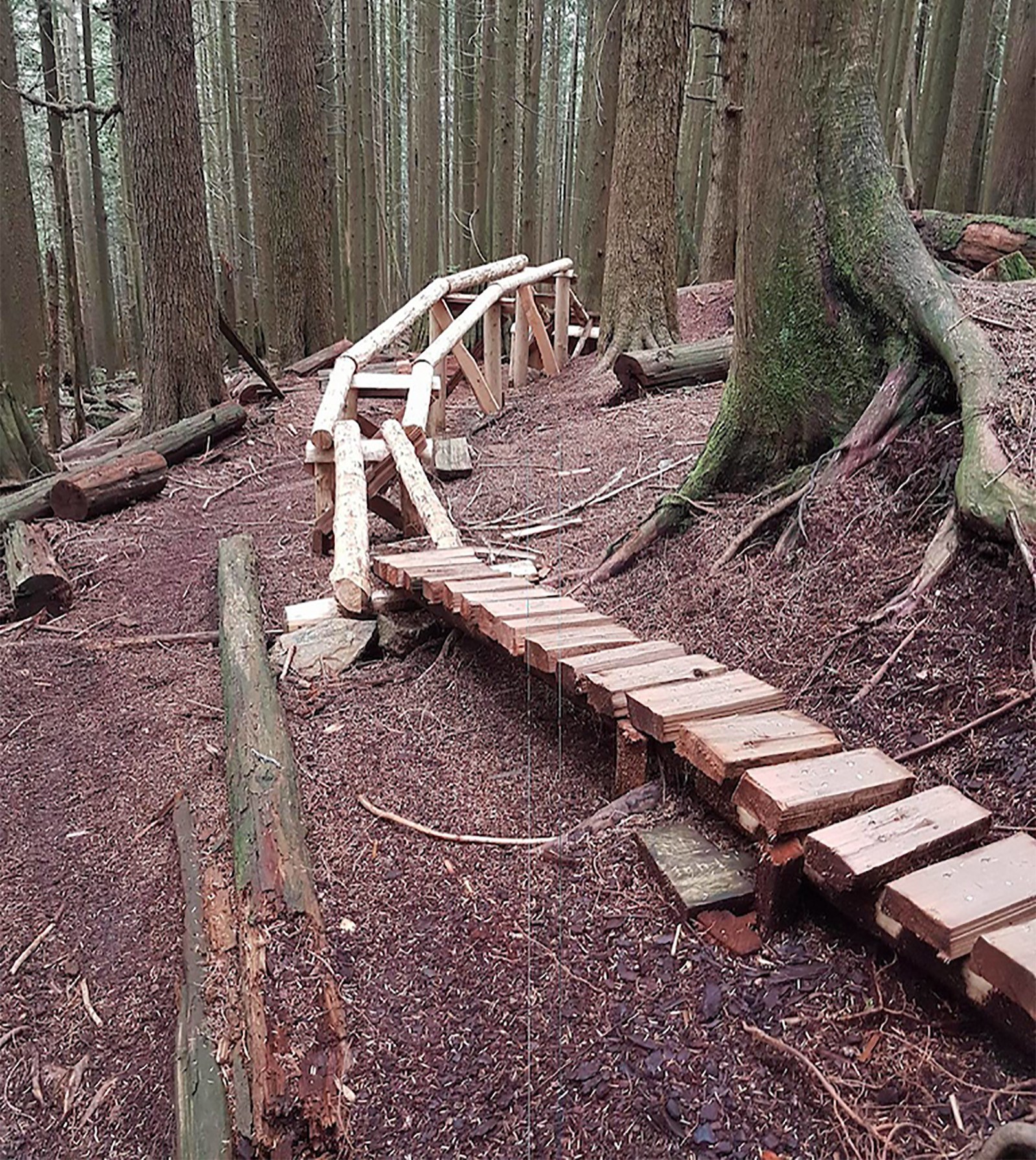 New woodwork being decommissioned. Such a terrible waste of labour and funding.

Different parties tell different stories about what actually happened. Why did work by paid trail builders begin, abruptly stop and then get torn down before most riders knew anything was happening at all? The nsmbA certainly wouldn’t have begun work without a permit from the DNV. 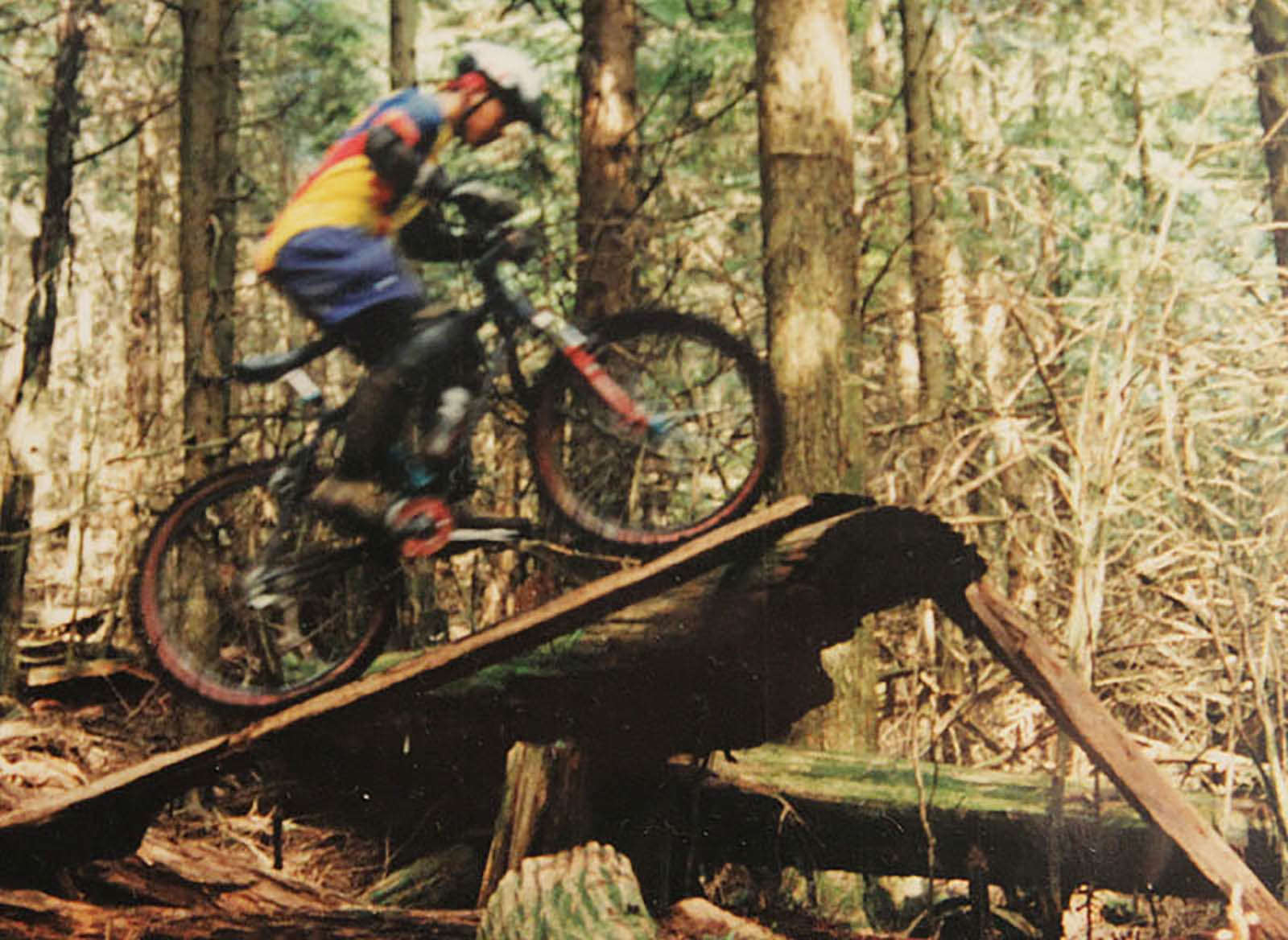 Lee Lau riding a Pink Starfish A frame. Eventually the downramp fell off and it had to be launched.

Unfortunately a cog was apparently thrown in the works when the District’s Trail and Habitat Coordinator Graham Knell abruptly took retirement. Some have suggested that Graham had sick days accrued and once his days remaining to pension eligibility equaled his accrued days, he simply stopped coming to work. The end of this story, that I will reiterate has not been confirmed, is that many of the permits that were thought to have existed were nowhere to be found. In my experience, Graham treated mountain bikers fairly and respectfully and he will be missed. 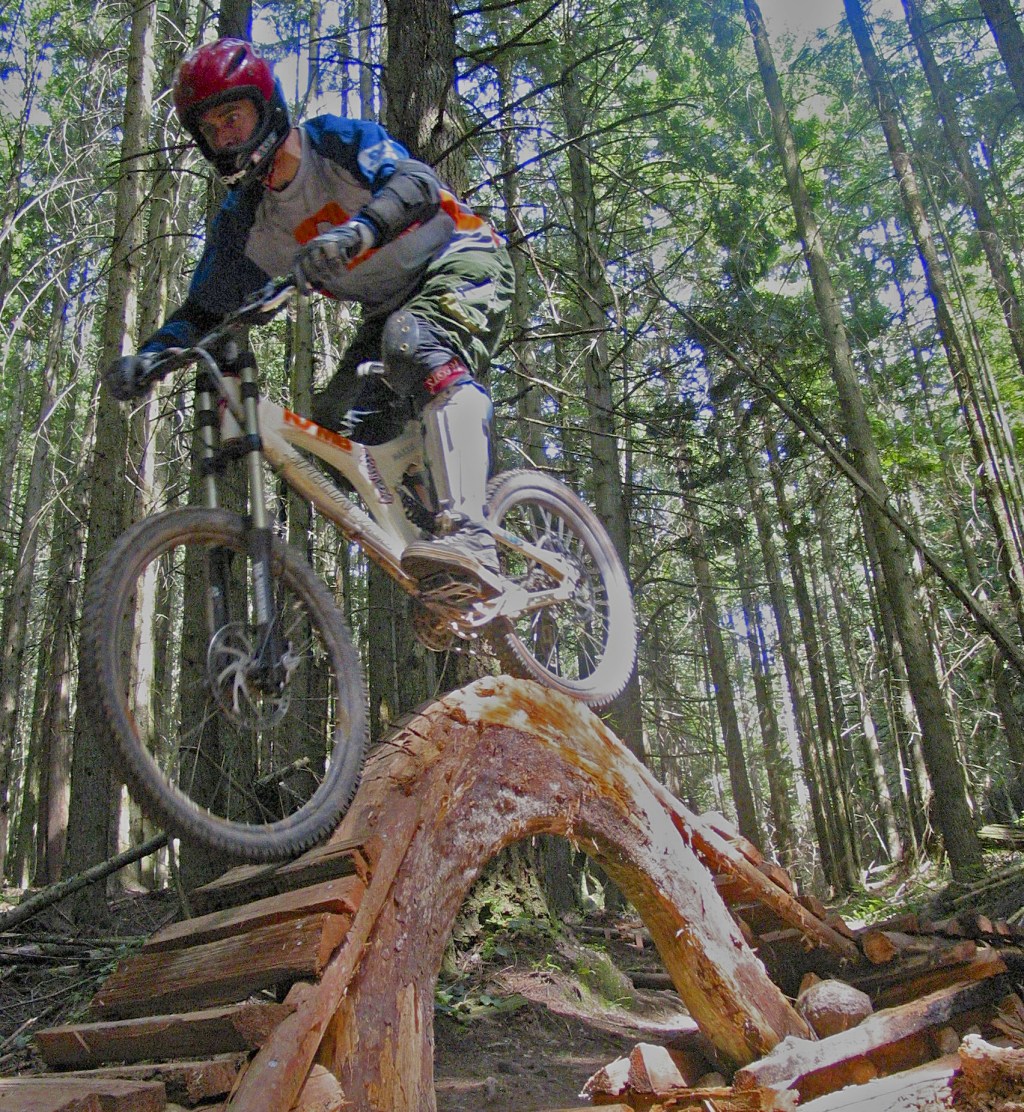 Cam McRae riding one of the ‘newer Starfish moves in perhaps 2005?

I was involved in the Alpine Recreational study ten years ago and a realignment of Starfish, to move it away from riparian zones draining into Mosquito Creek, was one of the recommendations from environmental consultants. Here’s their assessment of Pink Starfish in from 2007:

Recomendations in the notes from the Alpine Rec. Strategic Study conducted in 2007.

And now the decision makers have put a nail in the coffin of Pink Starfish. It’s a shame that this once relatively plentiful trail experience will soon cease to exist on Mount Fromme. While there are plenty of trails in better condition than ever, losing a trail that provides an experience that is disappearing stings like a pedal to the shin.

Clearly the nsmbA did everything they could to resurrect the trail and preserve some of the gnar the Shore is famous for. 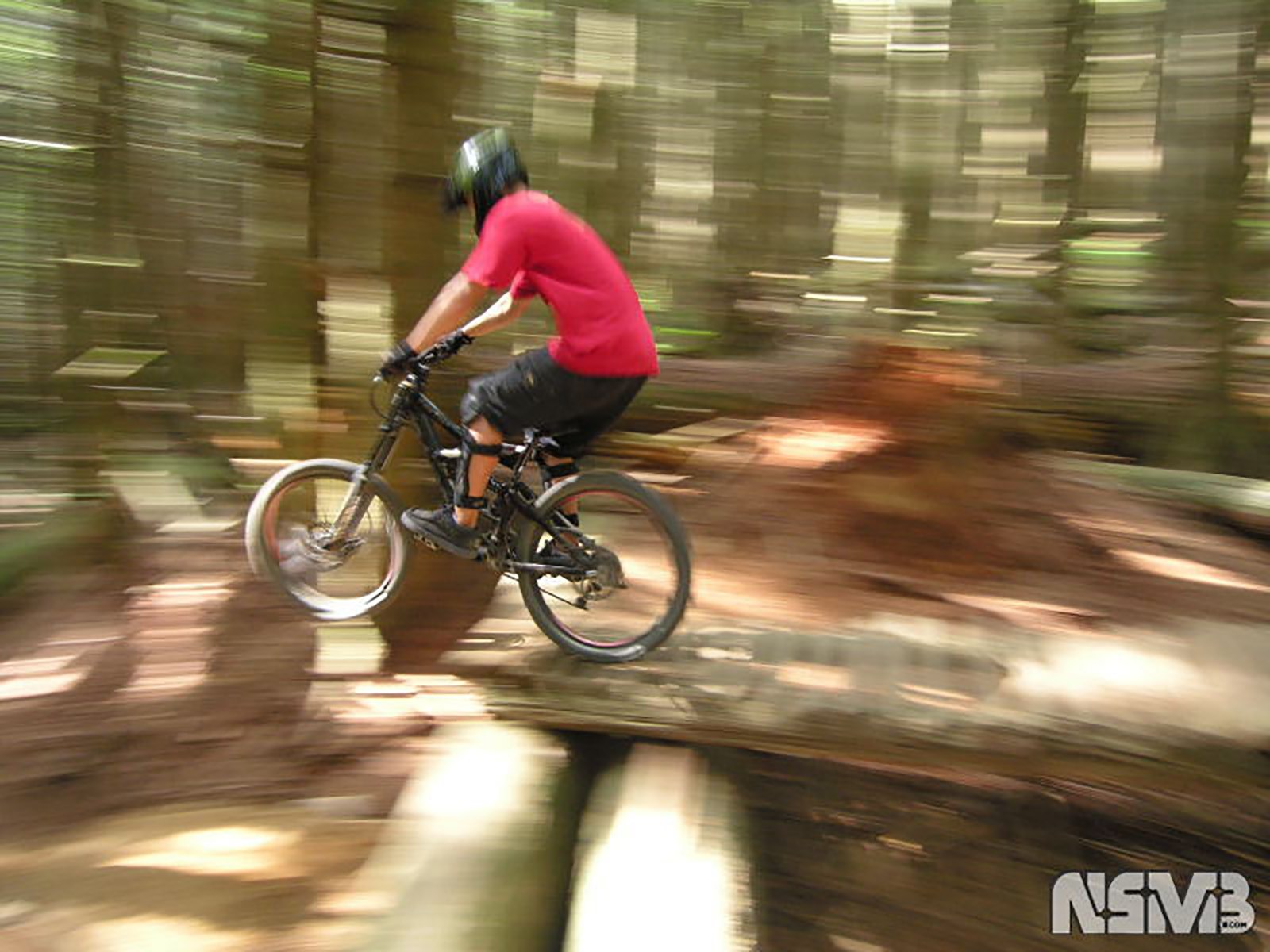 Despite the North Shore’s reputation for challenging trails it isn’t always easy to find chances to get off the ground. Pink Starfish was full of opportunities. Photo – John Krebs

Thanks to all the builders and volunteers for all their hard work. We wouldn’t even be having this discussion were it not for the strong advocacy and building efforts of the nsmbA and all the volunteer and paid builders – especially Digger.

"The nsmbA certainly wouldn’t have begun work without a permit from the DNV."

But they did. The work by Podolski to build new structures was circa June 2016. In the Nsmba minutes of April 2016 they recognized the permit didn't allow that work.

Hi Monica! Have a blessed day!

I'm so glad i live in Norway, where 99,9% of all forrest is open to everyone (without motor).