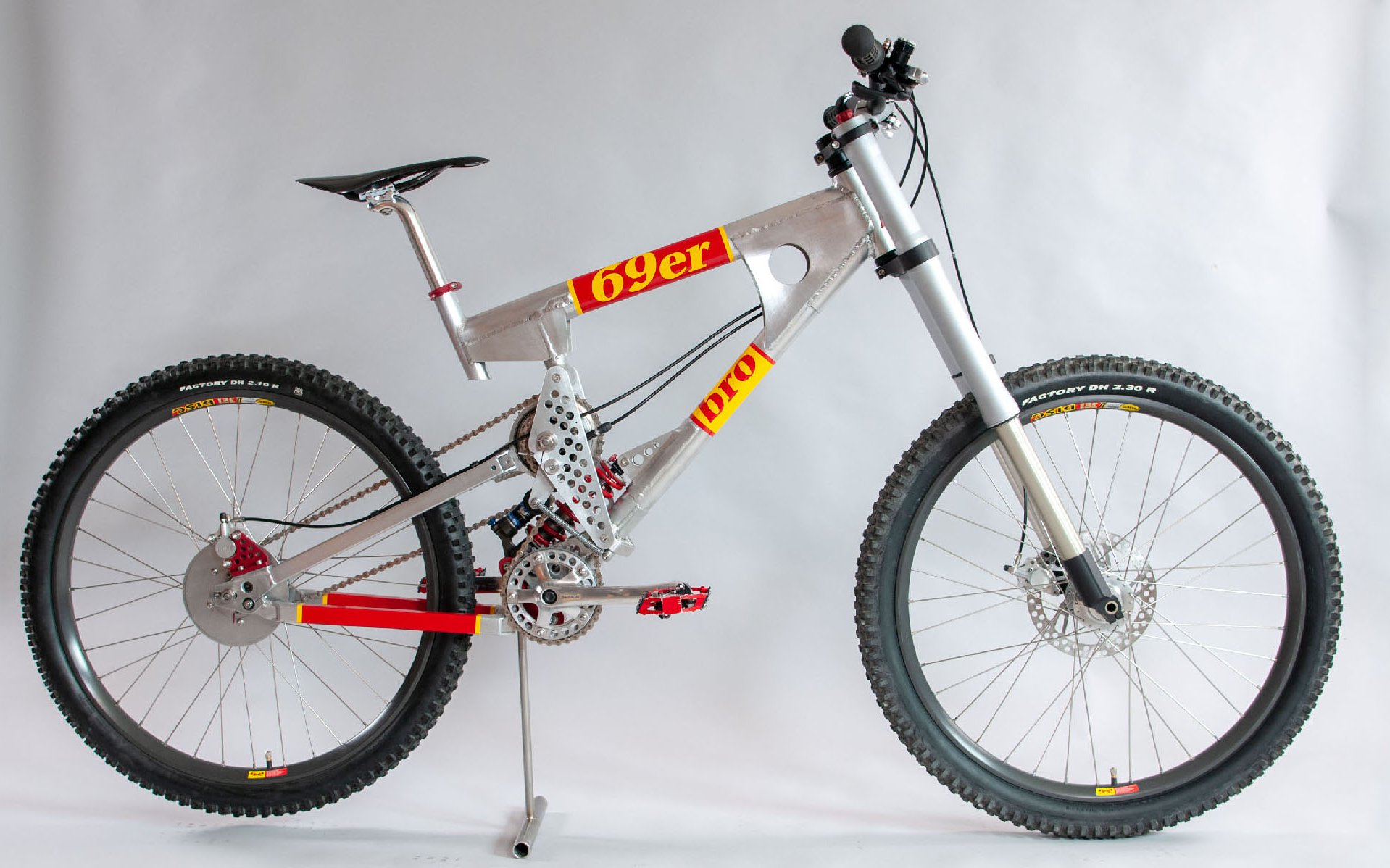 Mountain bikers from a certain era immediately recognize the name Paul Brodie. Paul started out in the bike business as one of the the first frame builders at Rocky Mountain, along with Derek Bailey. 113 Rocky Mountain frames were built by Paul's torch before he set out on his own and founded Brodie Bikes in 1986.

When mountain biking began to get a foothold in B.C., Paul's handmade steel frames were some of the best anywhere, and the first frames locally with a sloping top tube, a now ubiquitous frame feature found on virtually every mountain bike. While steel was Paul's preferred medium, there is one special bike that he built out of aluminum; the 69er downhill bike. Fans of recent designs from Norco, Forbidden and Deviate cycles, to name a few, will recognize the high pivot design, and if you remember the gearbox driven Honda RN-01 G-Cross piloted by Greg Minnaar in 2004 and 2005, you may notice a similarity or two. 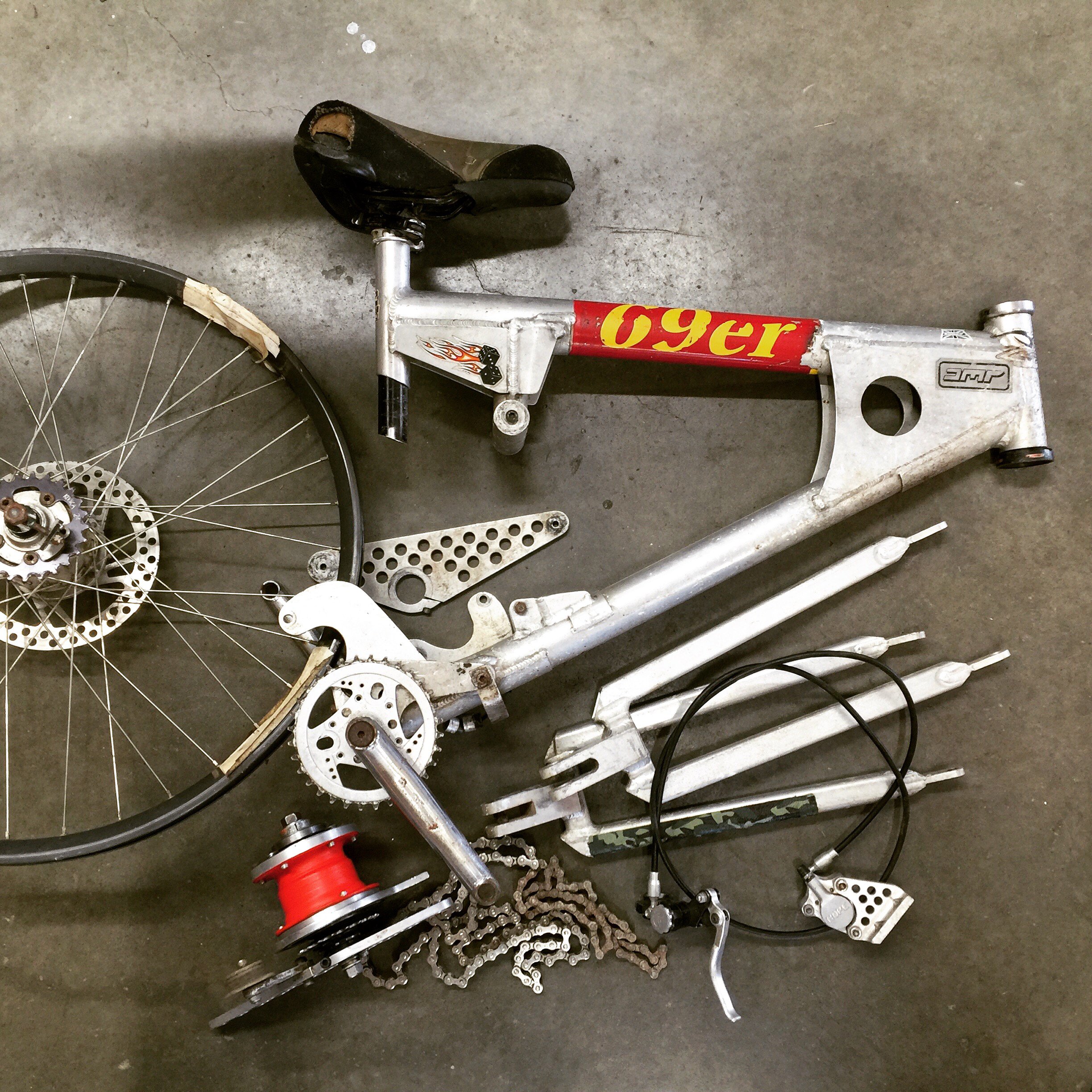 This is what Paul got back once he tracked down the bike. 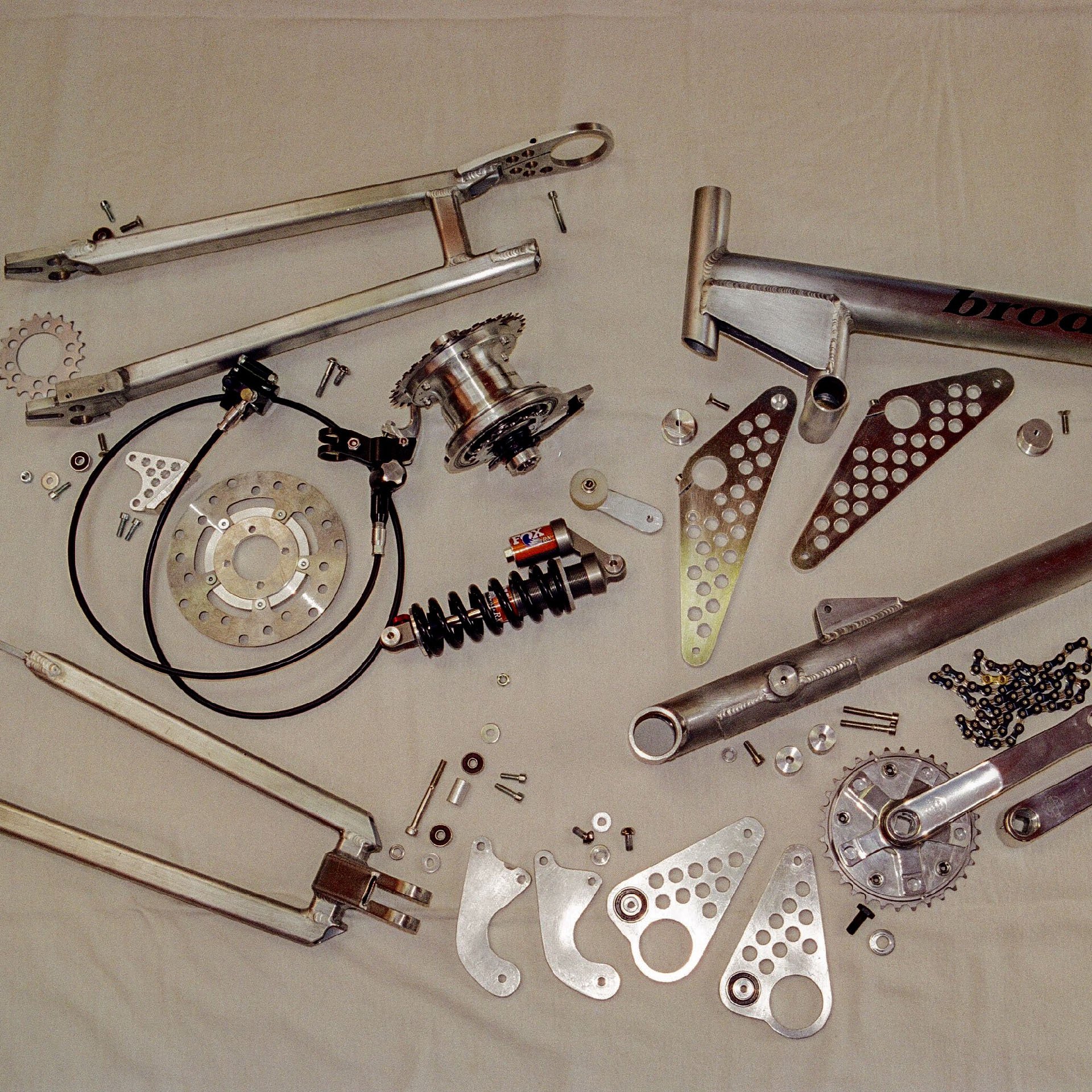 This photo was taken in 1998 when all the pieces had been fabricated and were ready for assembly.

This bike came to be by chance. Paul was short of funds in 1998 but his house was falling into disrepair. "I needed my house rebuilt, and Richard (Parker) wanted a custom downhill bike. We made a deal to barter hour for hour."* The bike was raced on the local DH circuit for a year when Richard wanted something lighter and more conventional ("typical racer," said Paul). The 69er, so named for the head tube angle apparently, was then passed to Patrick Beckstead who worked at Mighty Riders, in trade for an XTR group. After a season of riding and racing some cracks began to develop so Paul welded it back together. After another season a few more cracks were visible but the bike was still rideable, mostly.

Patrick's friend Chris MacDonald pestered him about borrowing the bike and Patrick finally agreed with the classic proviso; you break it, you buy it. It survived the first couple of times off the original GLC drop at the end of A-Line, but it didn't survive the third attempt, and Chris bought himself a bike. Price? Undisclosed.

*From the book, Paul Brodie, the Man Behind the Bikes

Paul decided he wanted to find the 69er and after a two year search he found Chris and got it back in his shop on October 9th, 2019, in trade for a copy of Paul's book and the promise of parts to rebuild Chris' other DH bike. Unfortunately the seat stays were lost in a fire and what was left didn't look very pretty. 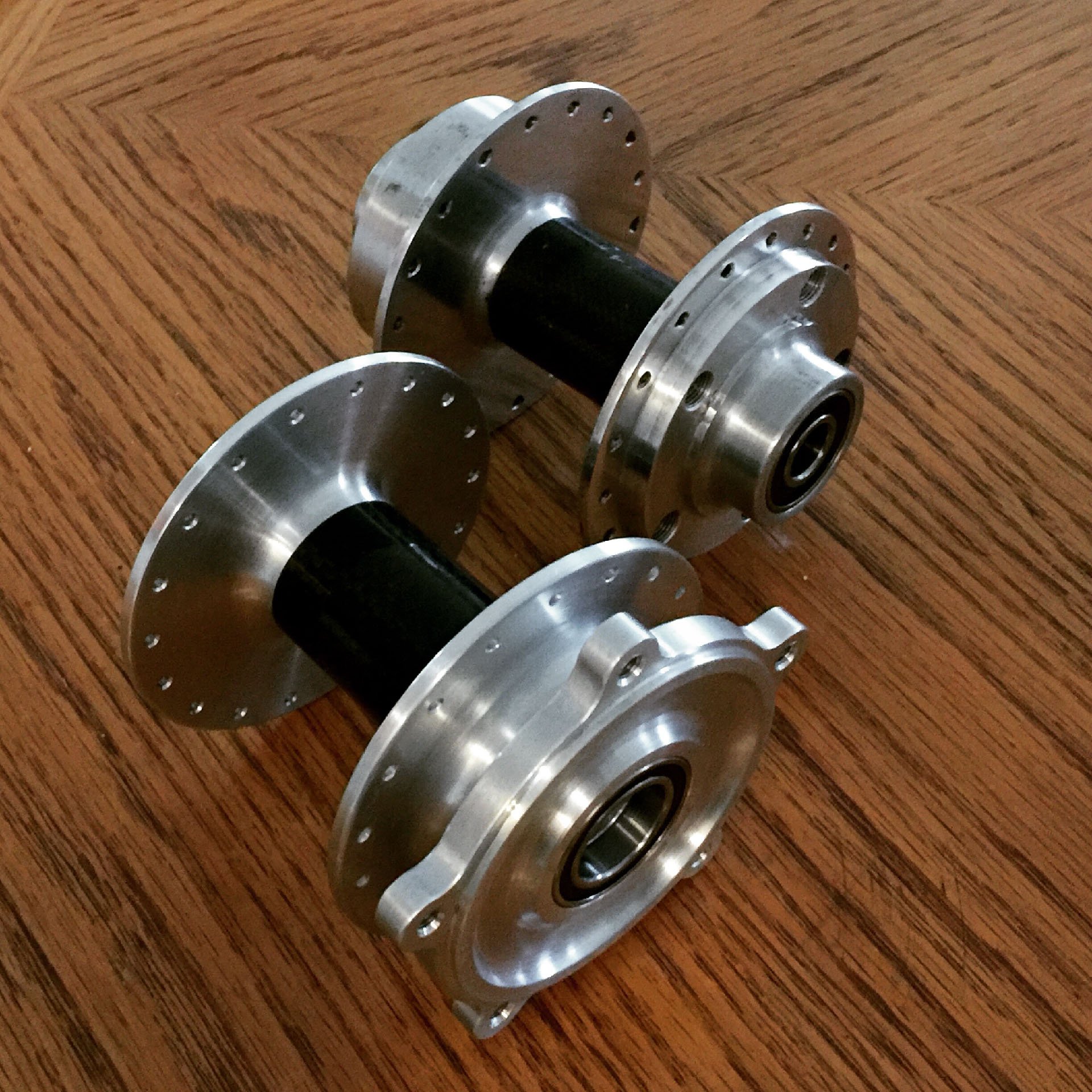 One off hubs. Originally the hub flanges were made by Paul's friend Dan Pederson. They were then glued onto a carbon fibre spindle. 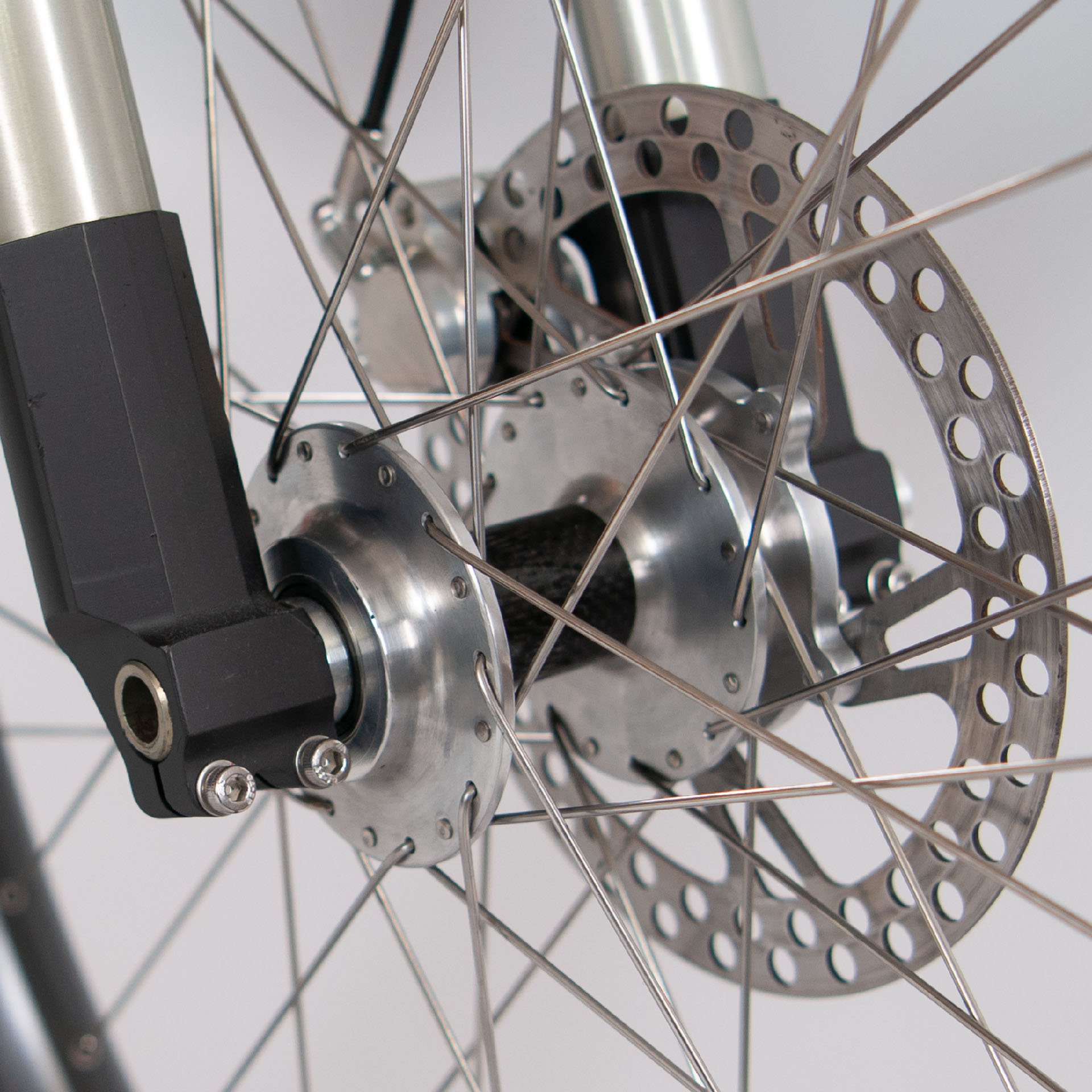 To rebuild the front hub, Paul purchased a 31.6 mm carbon fibre seat post off Ebay and cut it to length to join the flanges.

The Brodie 69er was a unique piece of mountain bike history. I had the pleasure of riding and racing it for two seasons. It took me down courses and trails throughout BC, Ontario, Quebec, Washington etc. The bike drew attention at all those places. It was ridden regularly by me at that time, maybe even more than was intended. The bike weighed about 55lbs but felt 60. Pushing it up Mountain Highway was great strength training. It rode extremely well, long and low for the era. The chain is isolated from the suspension meant for a smooth, active ride. The Nexus hub sandwiched in the frame was both novel and functional. It shifted well and never dropped the chain, which anyone who was riding a DH bike in that era knew was next to an impossibility. I’ve had many, many bikes over the almost thirty years of riding — the 69er is one that will always be the coolest. I’ve been a bike mechanic throughout those years too — the 69er always appealed to the bike nerd in me. The custom rear hub, brake system and drivetrain… what more could you ask for? - Patrick Beckstead talking about his time on the 69er 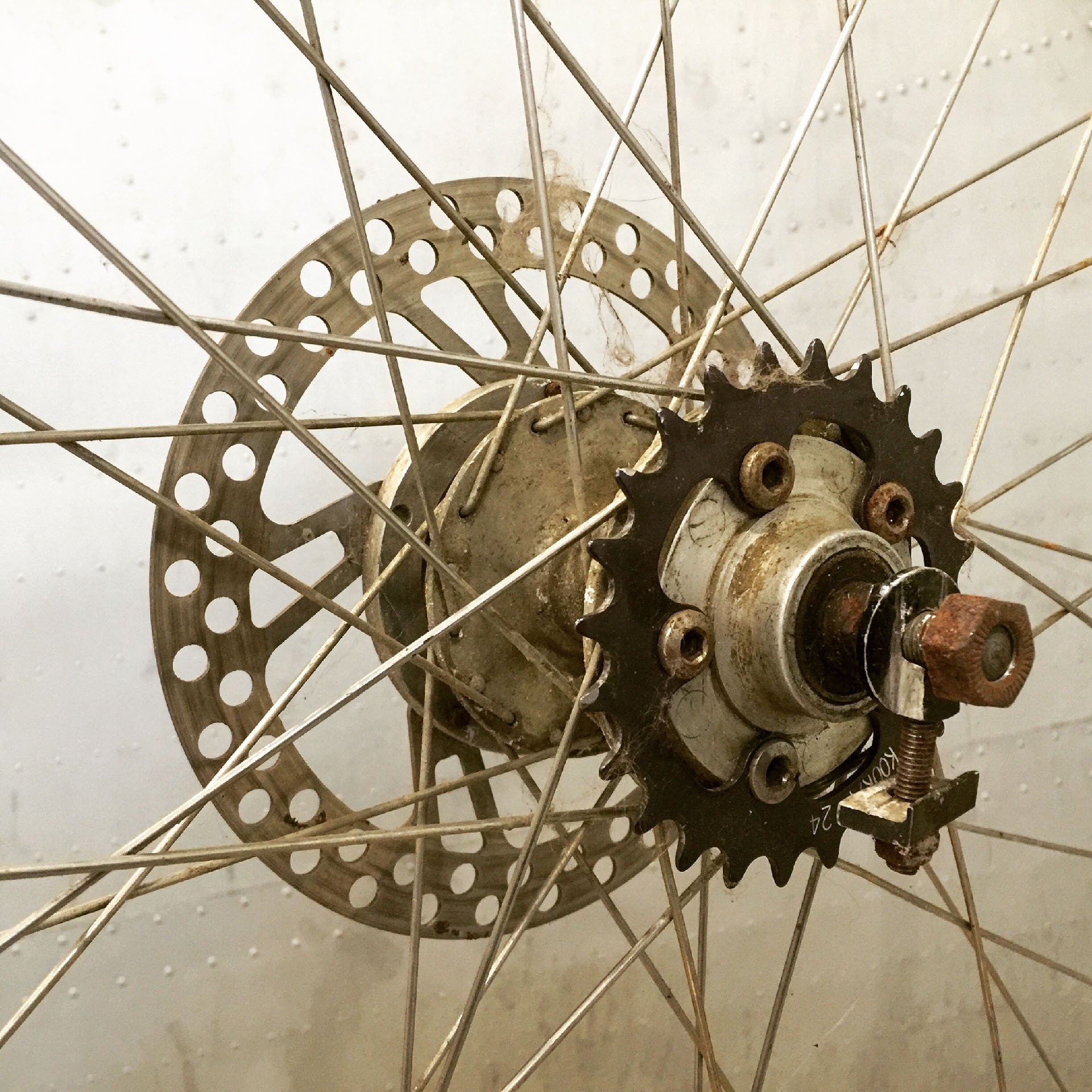 The original rear hub (before restoration) had no freewheel and the cog is actually a chainring. The Shimano Nexus 7 Spd hub does the freewheeling. 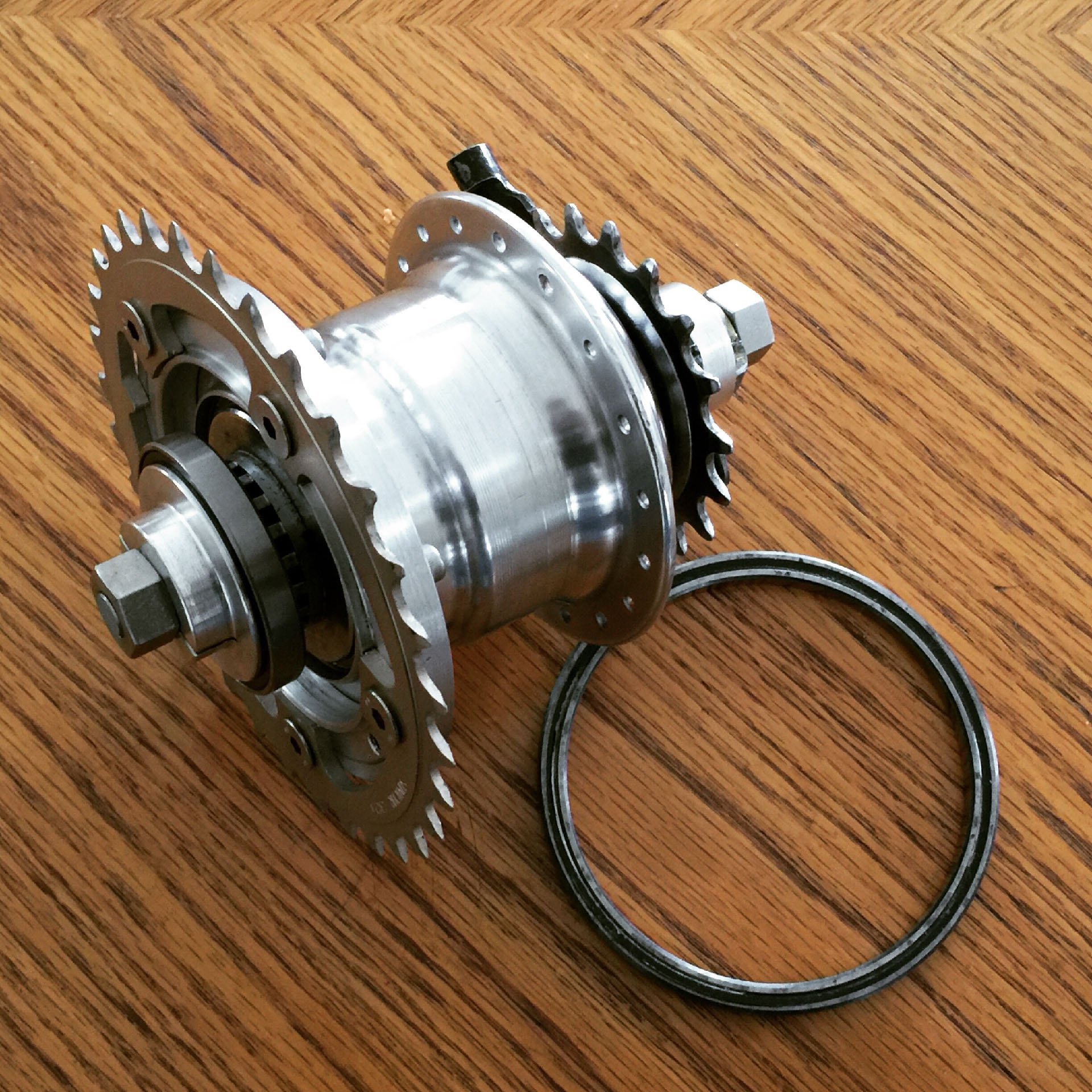 The Nexus hub polished up for the rebuild. Another chainring ensures a 1:1 ratio between the drive mechanism and the rear wheel. 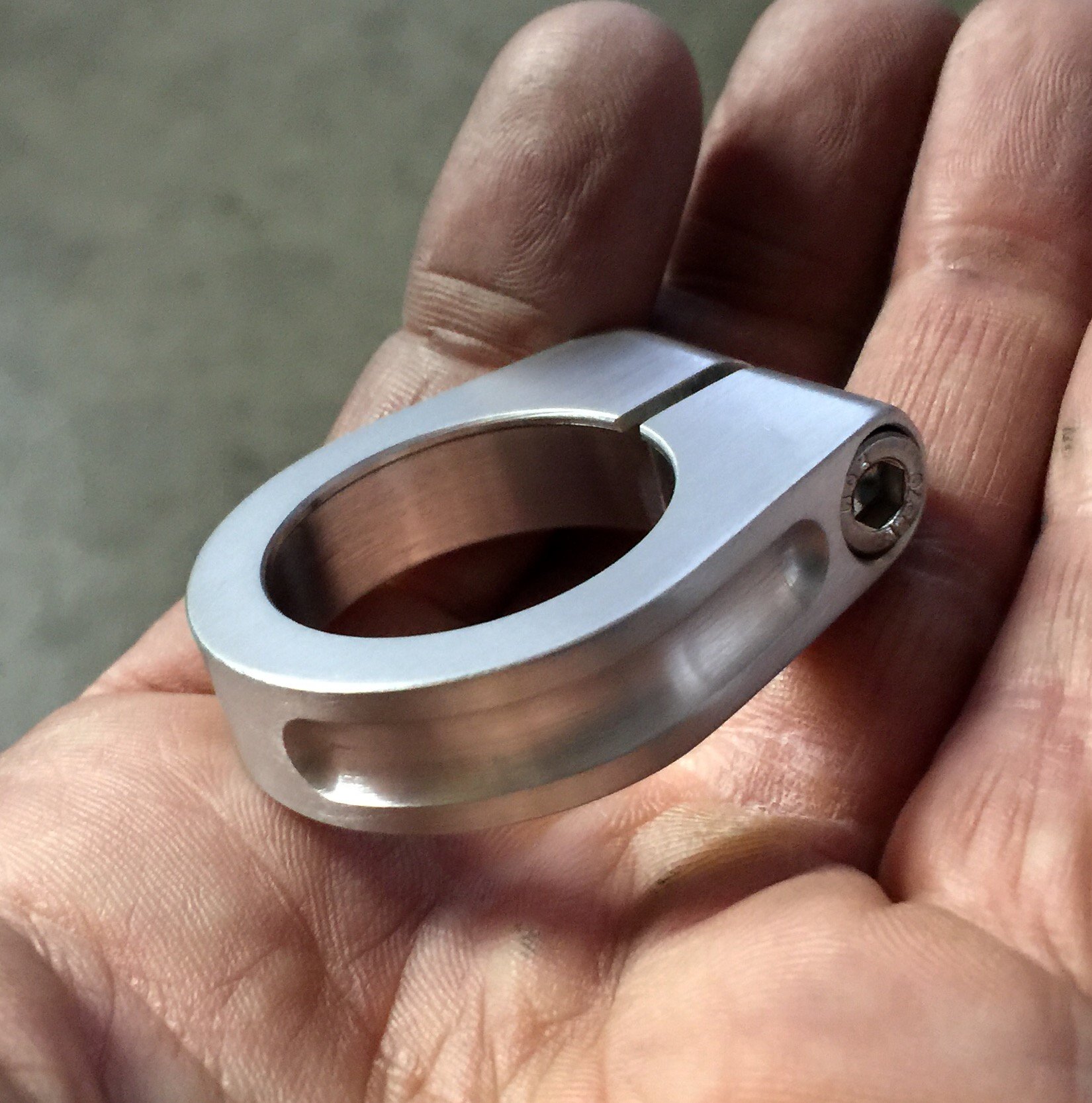 When you are Paul Brodie, you build everything you can from scratch. Starting with a block of billet, it takes Paul about three hours to make one of these. If you are interested, you can watch Paul make it on his YouTube Channel in about 15 minutes. Careful, I couldn't stop watching. 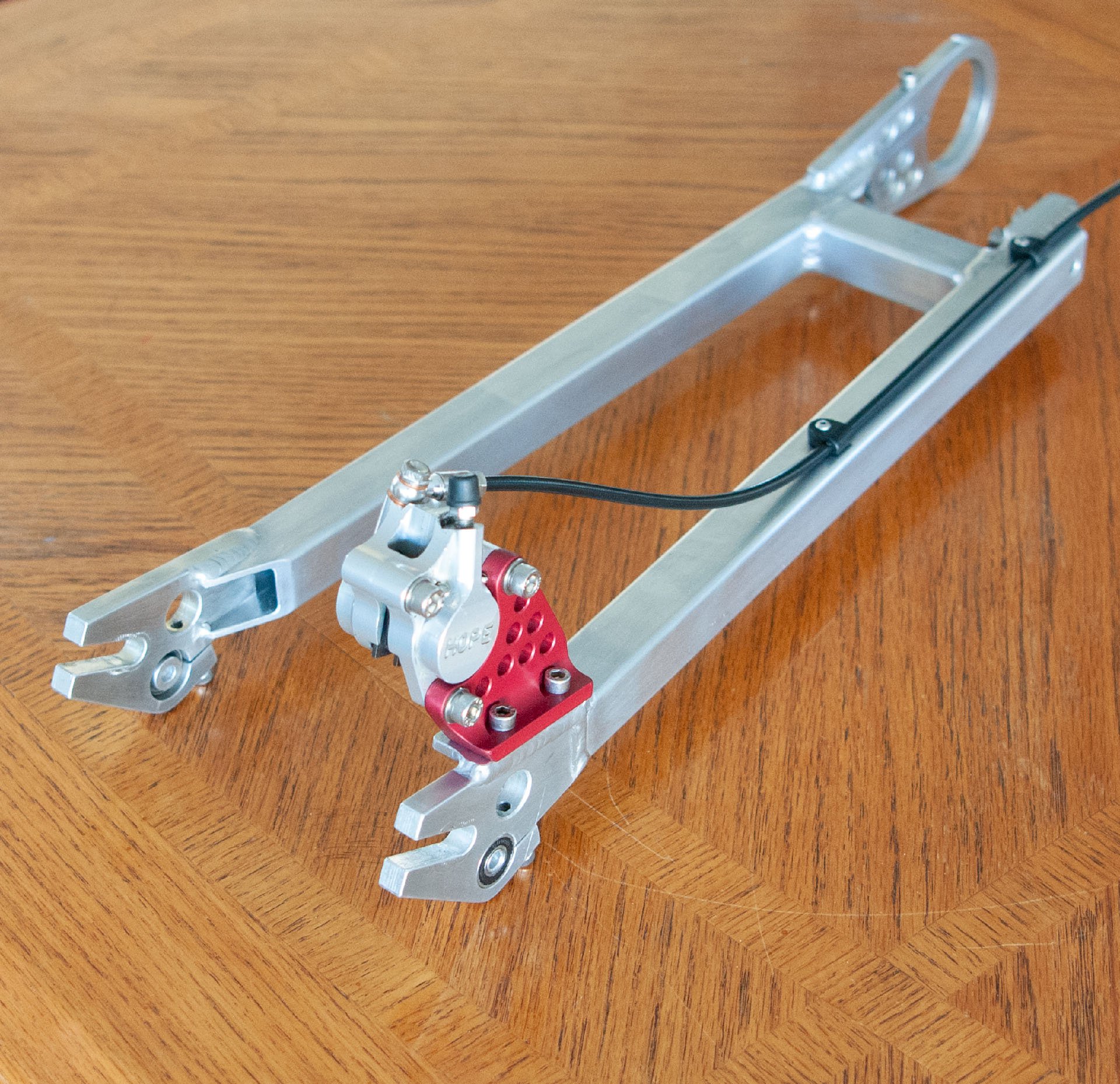 The chain stays with the Hope caliper mounted to what would normally be the drive side, but the jackshaft design puts the drive on the other side. 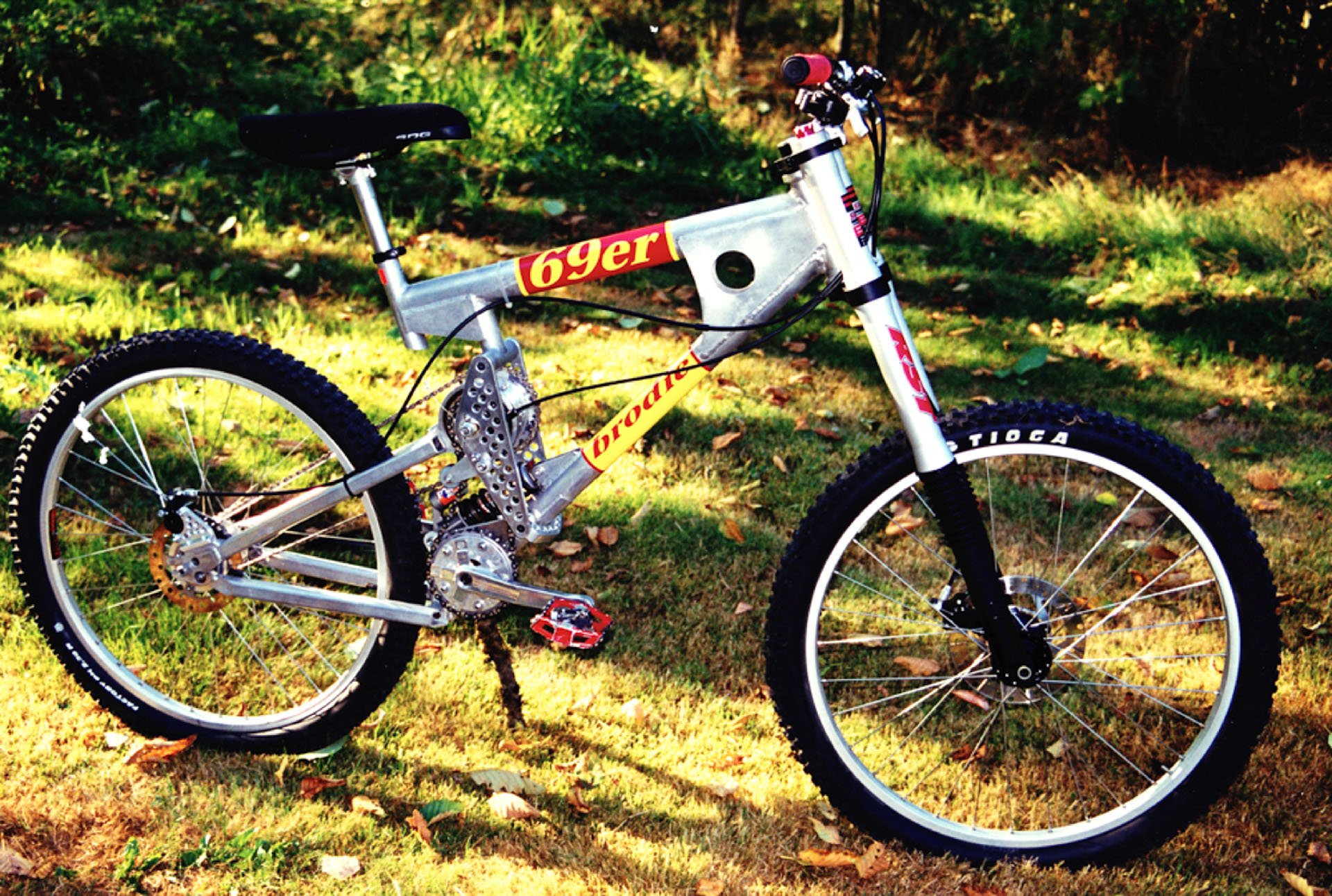 The 69er in its original form, complete with an RST Sigma fork. It eventually was adorned with a Monster T and then a Stratos S USD. 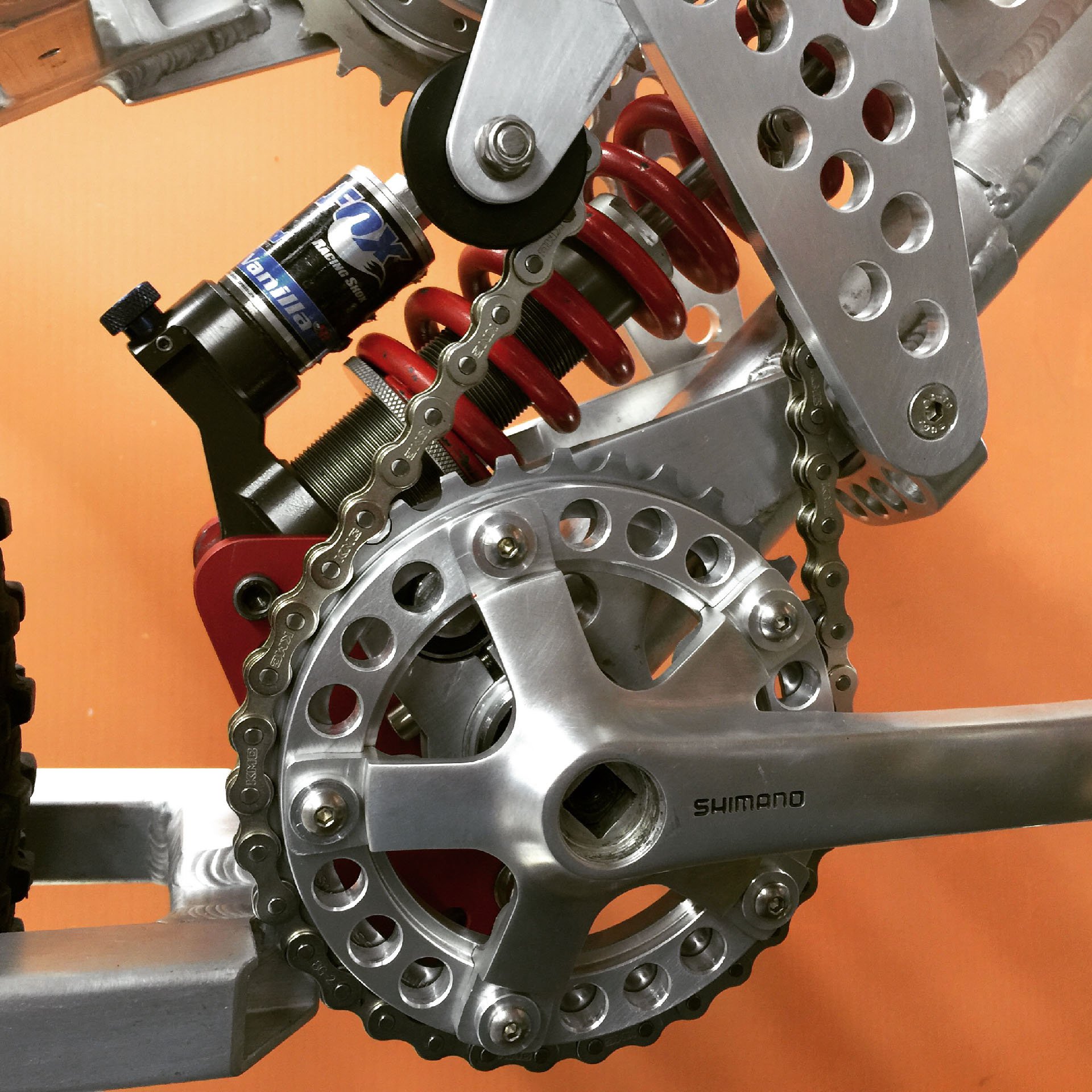 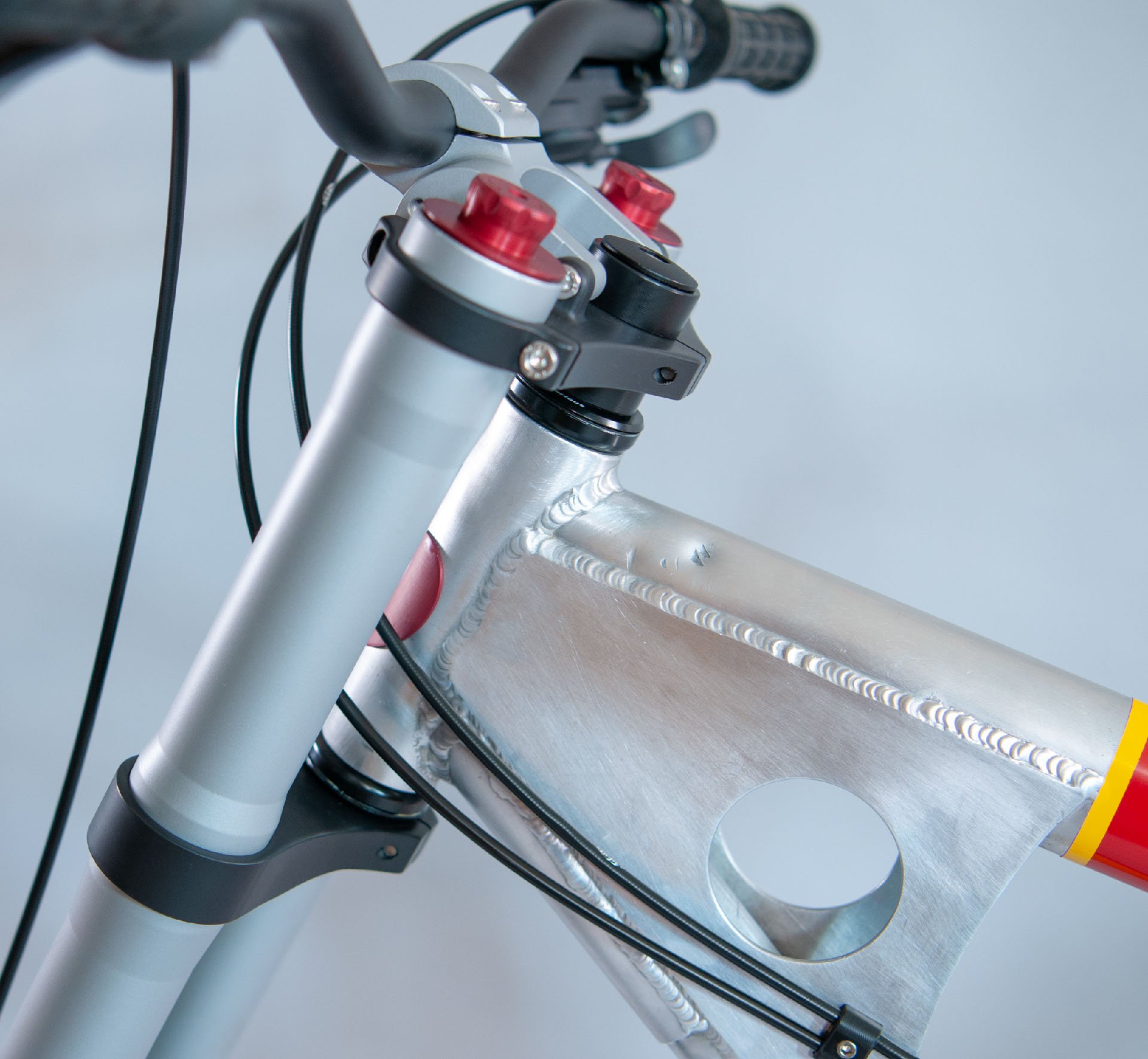 The dent in the top tube came from the 69er's time with the Monster T up front. 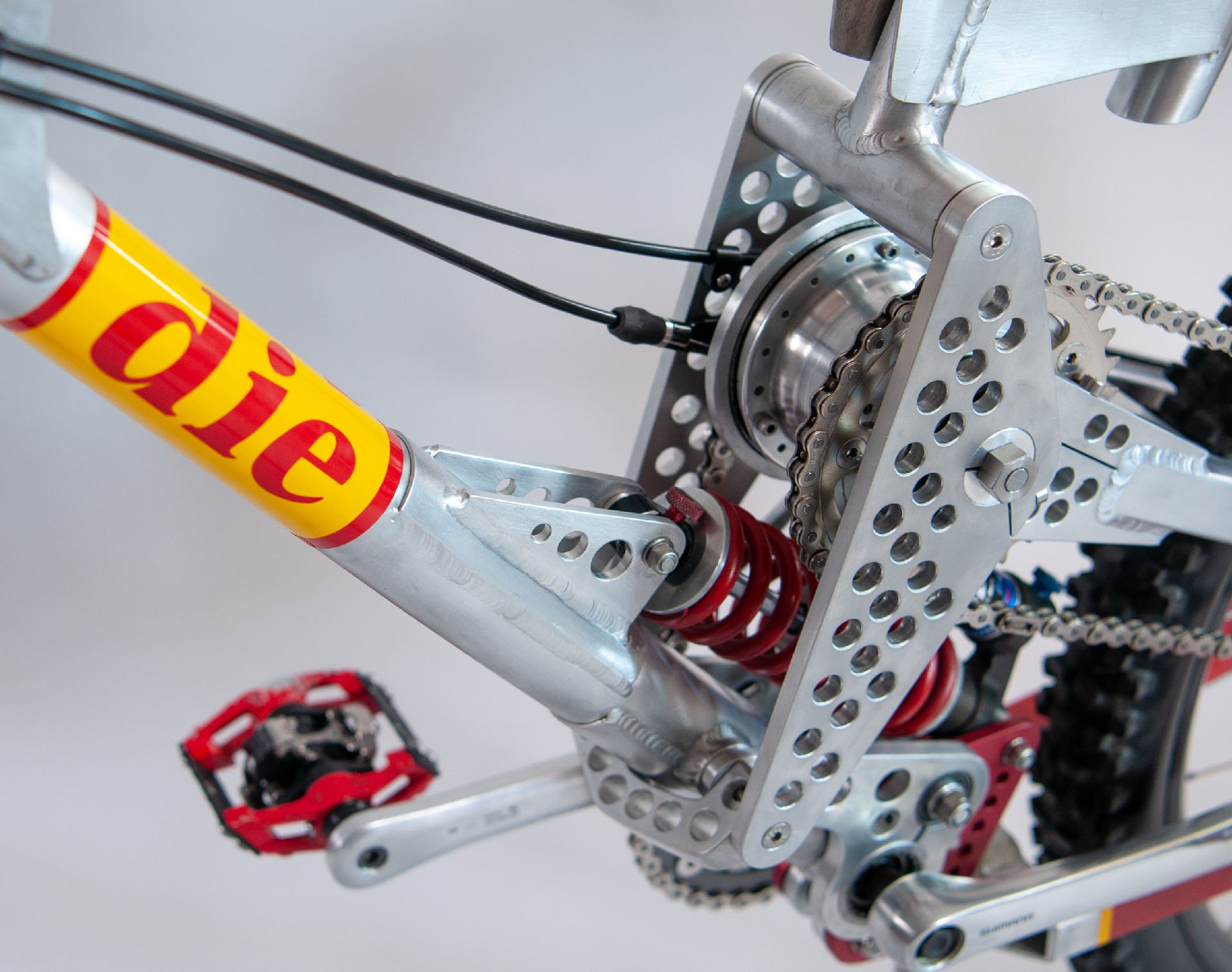 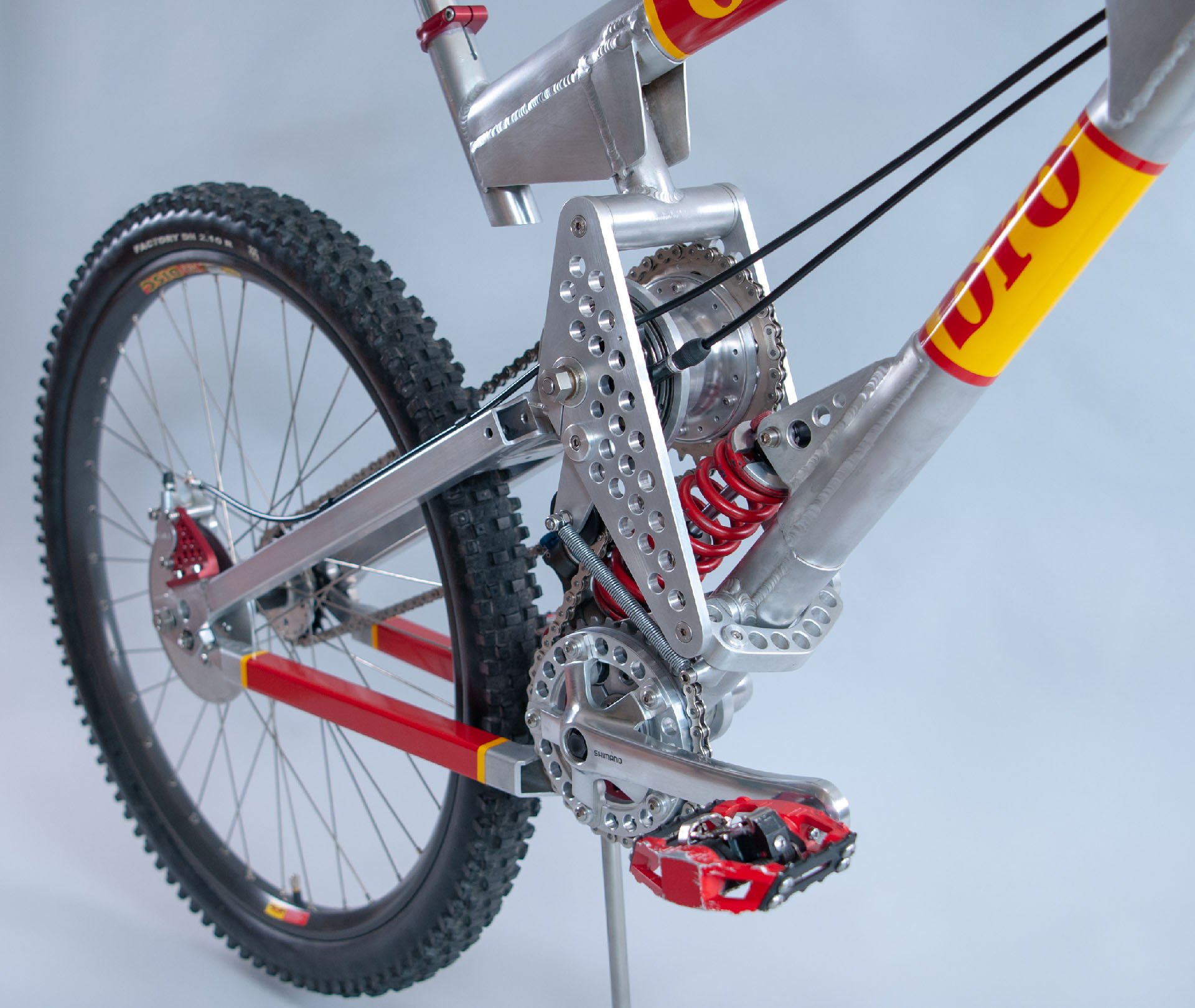 This is a mind boggling project, but nothing compared to building motorcycles...

What do you does Paul Brodie do when he isn't rebuilding old bikes? He builds replica motorcycles from scratch, including the engine... 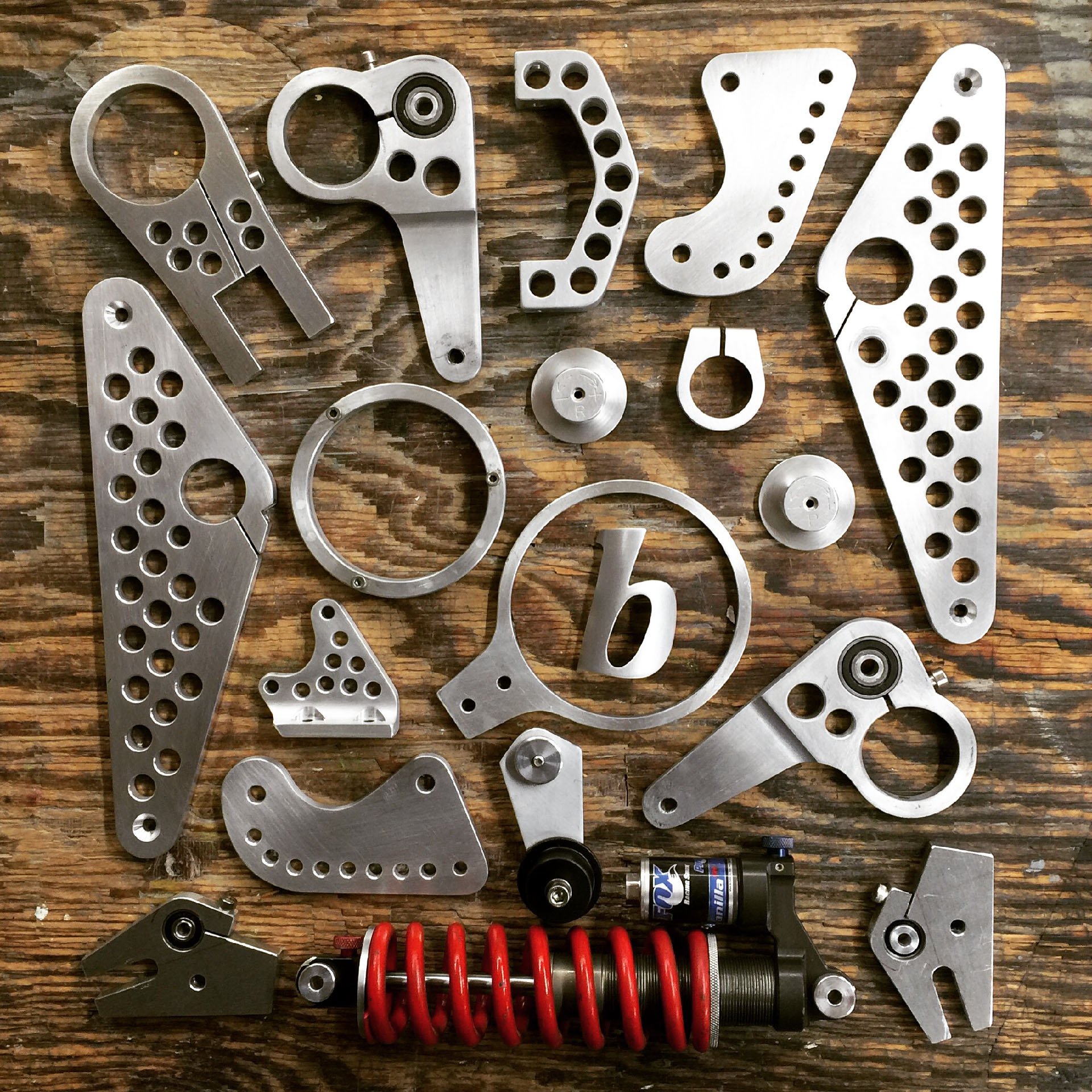 Parts built from scratch, and some from memory, ready for the rebuild. 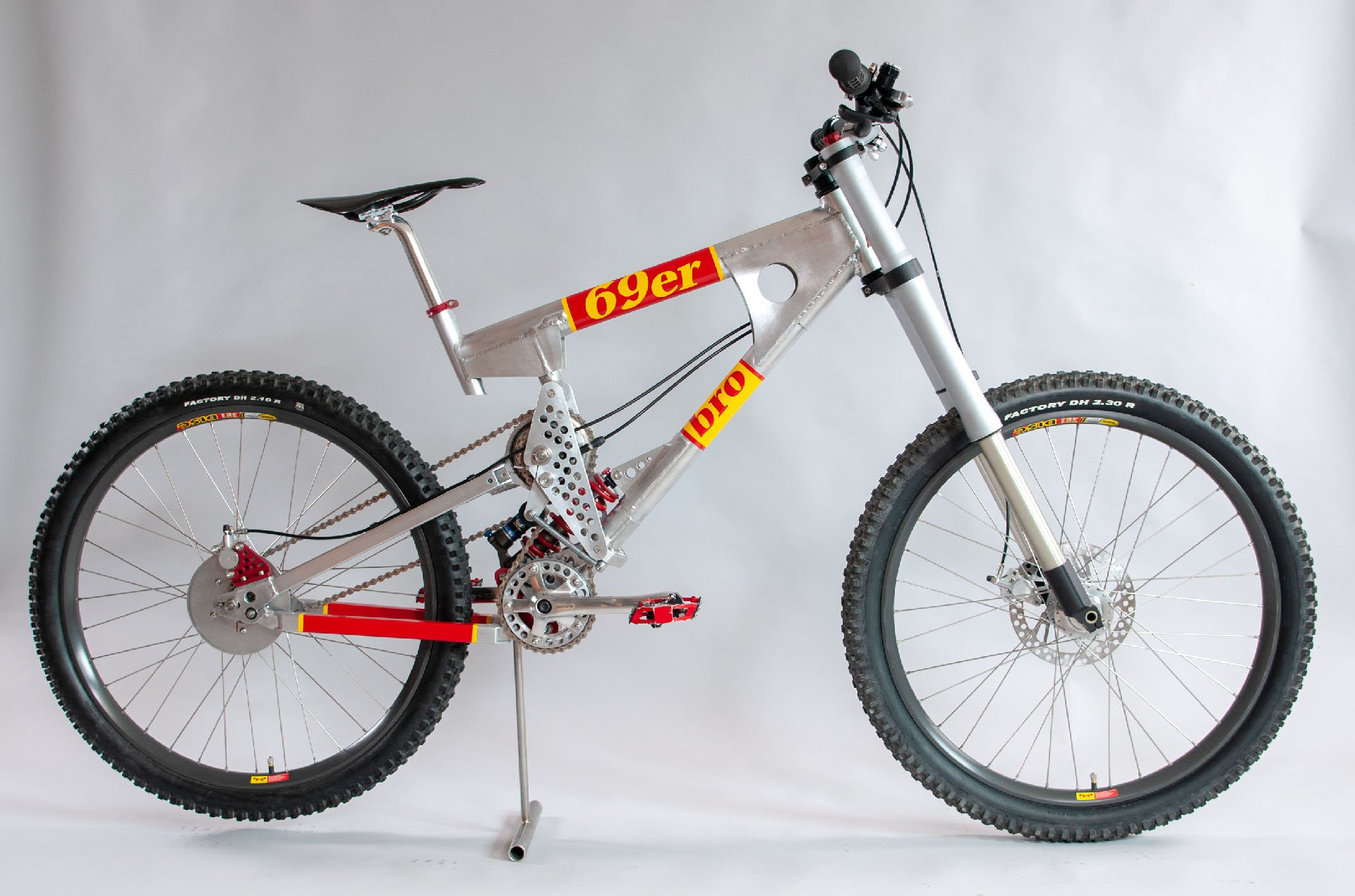 What a machine. The shape looks promising, despite the small wheels and steep head angle. Note - the rear rotor was in the mail at this point.

Paul's plan was never to ride the bike so I asked him why he didn't just cobble something together and mount it on the wall; "What I got back was really rough, so it would have been hard to show that around and say Hey! Here's the 69er. I like a challenge, a good project, so the 69er fit those criteria well. Plus, there is some local history. I just like #makingstuff." The idea was that this would be a show bike, so Paul set about rebuilding it better than new.

Have a look at Paul's instagram to check out his incredible original bike and motorcycle design and build projects and to see how he actually makes stuff, have a look at his mesmerizing YouTube channel. Once COVID-19 settles down we'll be doing more with Paul Brodie, so stay tuned.

For more on the 69er in Paul's own words, check out this article on The Spoken

Brodie Bikes: How It All Began

60 Seconds of Jeans and Shred

My god. I’ve wasted my life.

oooh. how i used to drool over this back when rich was racing it locally. helped kick off my gearbox infatuation. that it was recovered (& lovingly restored by it's creator) after all these years is just amazing.

also: paul is such a gifted maker of cool things. an icon for sure.

I have lost a lot of time to that YouTube channel. I consider it quality time though ...

Gained time! He’s such a wizard and so completely undaunted in the face of challenge. Like building a replica of a motorcycle engine from 1919? Makes me want to build more things, and simultaneously makes me want to never touch a tool again!

his excelsior project was absolutely bonkers. building a replica of a vintage motorbike (of which there are no remaining examples) based on a handful of pictures. from absolute scratch. FABRICATING A COMPLE WORKING ENGINE FROM SCRATCH. i'm in awe. anyways, lots of build thread details here: http://flashbackfab.com/excelsior-homepage/

That little brace that ties the two vertical plates under the down tube. Just amazing.

Those plates make me think of the RM7s I owned back in the day. I hadn't noticed that brace - wow!

I've been watching this happen on instagram for a while now. So cool that it's finished, what a piece of history.

Beautiful bike with lots of innovation there. Paul's part of the inspiration that kicked off building my own frames in the garage. I didn't do his frame building class but did attend one of his open house nights and it's the first time I handled a brazing torch to stack little blobs of brazing rod.

No mention of the Zerode downhill bike?

That is accurate. Or Nicolai. Or Cavalerie. Actually there are 100 brands who use Pinion gearboxes - but not all for mountain applications. Lots of interesting gearbox bikes over the years but Zerode seems to be the one that is most appealing. I’d love to ride one someday.

I'd love to try some of those others, but have taken a lap down Rude Rock in QT on a Zerode DH.

The first bike I thought of when I saw the final build is the Zerode G1.

I’ve got my G2.5 and Taniwha and love them both but they are very different.

The pinion gearbox is very slick compared to what was used on the older bikes.

Had the Cavalerie as well. Good, but not as refined as the Zerode + Pinion. Still a nice bike though :)

awesome! Loved his series about building the Romax too.

Paul is an amazing guy. Super talented. I highly recommend reading his book - I found it almost as interesting for its history of the Vancouver area as for the bike history. Reading about the era when downtown Granville St. used to be a strip of auto garages and machine shops. Amazing! He was gracious enough to weld our first batch of bikes when we were doing Dark Cycles, even though he was clearly busy enough at the time to not bother. While working with him, he told me my favourite bike industry joke:

How do you make a million bucks in the bike industry?

LOL I’ve heard another version of that.

How do you make a small fortune in the bike business?

Start with a large one.

Funny how the restored version has "BRO" on one side of the DT and "DIE" on the other. So many fascinating (to me) details here.

That’s mentioned in his book. Brent Martin, former owner of Ryders Eyewear was one of the first racers to ride a Brodie frame. In Paul’s words: ‘Brent wasn’t too sure about having Brodie decals on his downtube, so he took half of them off. One side said “bro” and the other “die.”’ Beyond that Paul mentioned somewhere that he no longer has the rights to the Brodie name.

Brent went on to race and win the 1986 Canadian Championships on that bike, with a bum wrist and wearing gloves lent to him by Paul.

Master-craftsman is a bit of an understatement when talking about Paul B.

This bike is so beautifully ugly! Love it!

I used to love seeing the wild creations coming out of interbike in the 90s/ early 2000s and always expected back then that gearbox bikes would have been the norm by now.