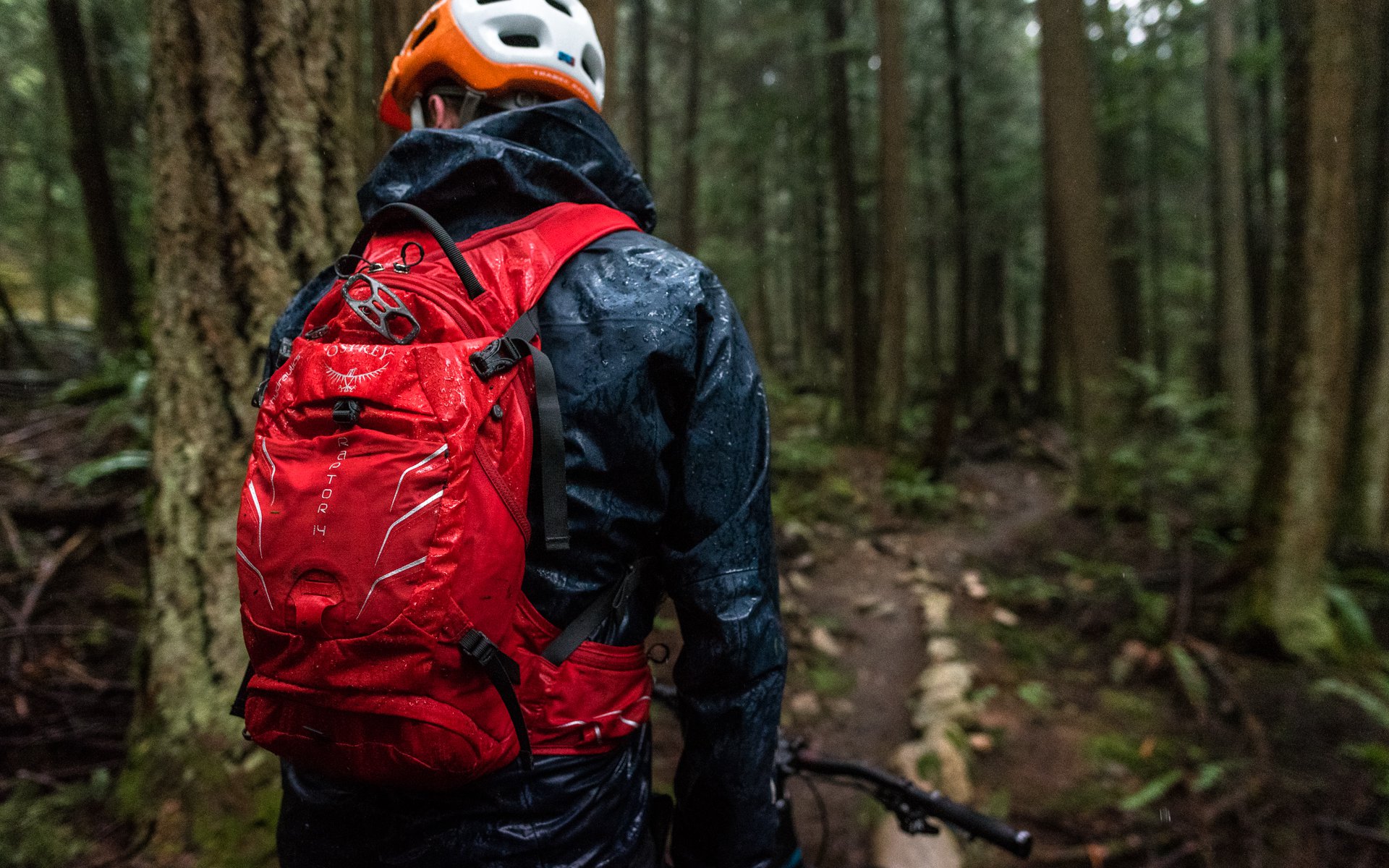 The speed with which hydration packs have fallen out of favour with mountain bikers is staggering. Hip packs, hidden frame compartments, and the good old water bottle are hot – backpacks are not. I feel like I’m one of the few left who still wear a pack almost every ride. This must be the reason that I was asked if I wanted to review the Osprey Raptor – it was probably hard find anyone else who still rides with a backpack!

The Raptor is a 14-litre (854 cubic inch) pack and comes with a 3-litre (100 cubic inch) hydration reservoir. It easily fits everything you need for a big day on the trails. Those 14 litres are divided into several compartments and subcompartments including two small hip-belt pockets and a neat tool pouch at the bottom of the pack. Osprey also offers a 10-litre version.

The number of compartments is a bit overwhelming. If I put something in every pocket, I think I’d have trouble remembering where I put what when I need something during a ride. So apart from putting my tools in the tool pouch, my wallet and keys in the front pocket, and my phone in the small top pocket, I just dump everything else (spare layers, tubes, snacks, rain cover, first aid kit) in the large main compartment. 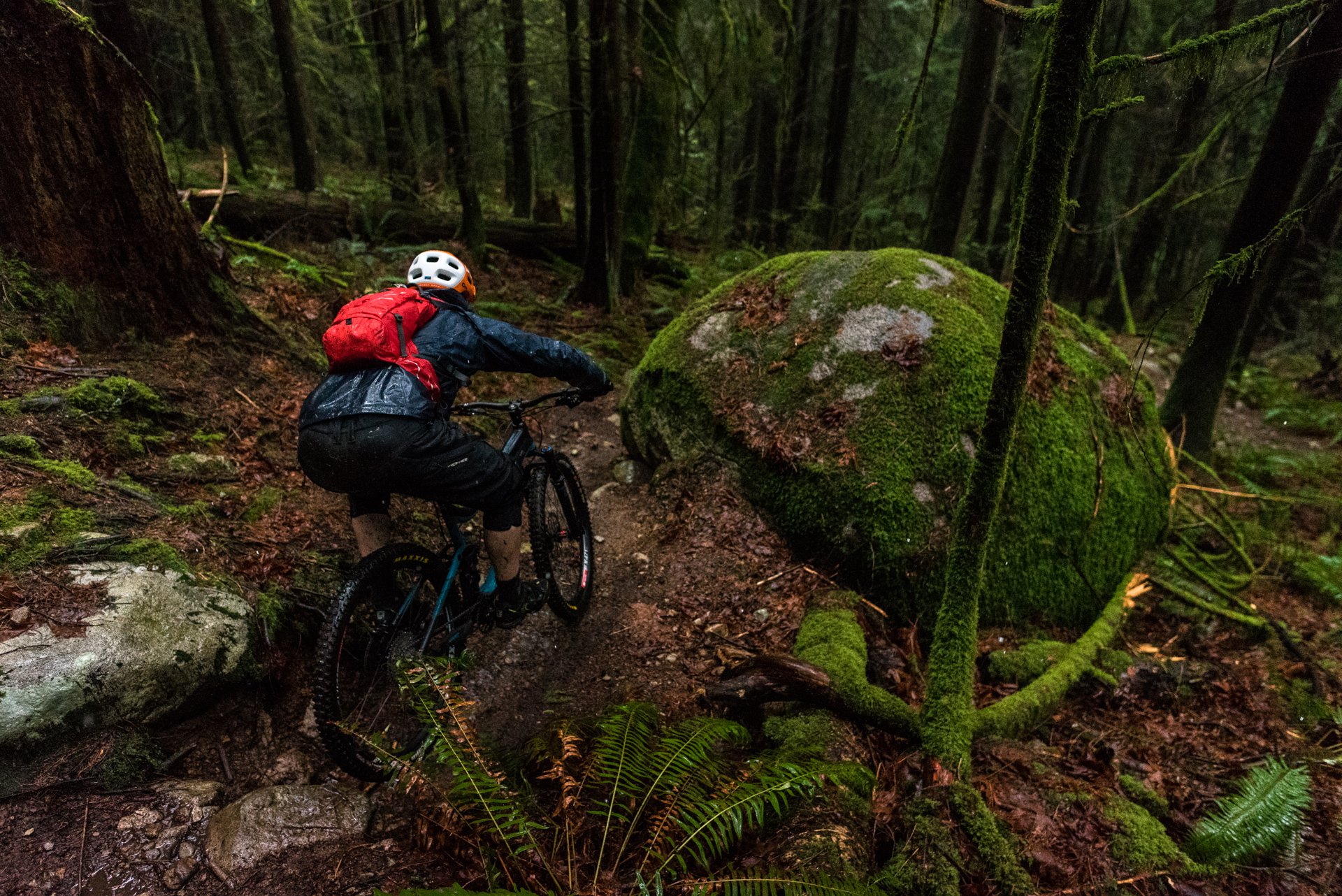 The Raptor has a comfortable fit and doesn't move around while riding.

I find the Raptor very comfortable to wear. The ventilated back panel does a reasonably good job of limiting the heat build-up while still keeping the pack close enough to the body to be stable and avoid the dancing-monkey-on-the-back feel. It also sits nice and low and doesn’t interfere with my helmet, a problem I have with some other packs, especially on steep descents. The shoulder, chest, and hip straps were easily adjusted to acquire the correct fit and haven’t come loose or annoyed me in any way. Overall, I really like the fit of the Raptor and I pretty much forget it’s there while riding - probably the best compliment a pack designer can wish for. 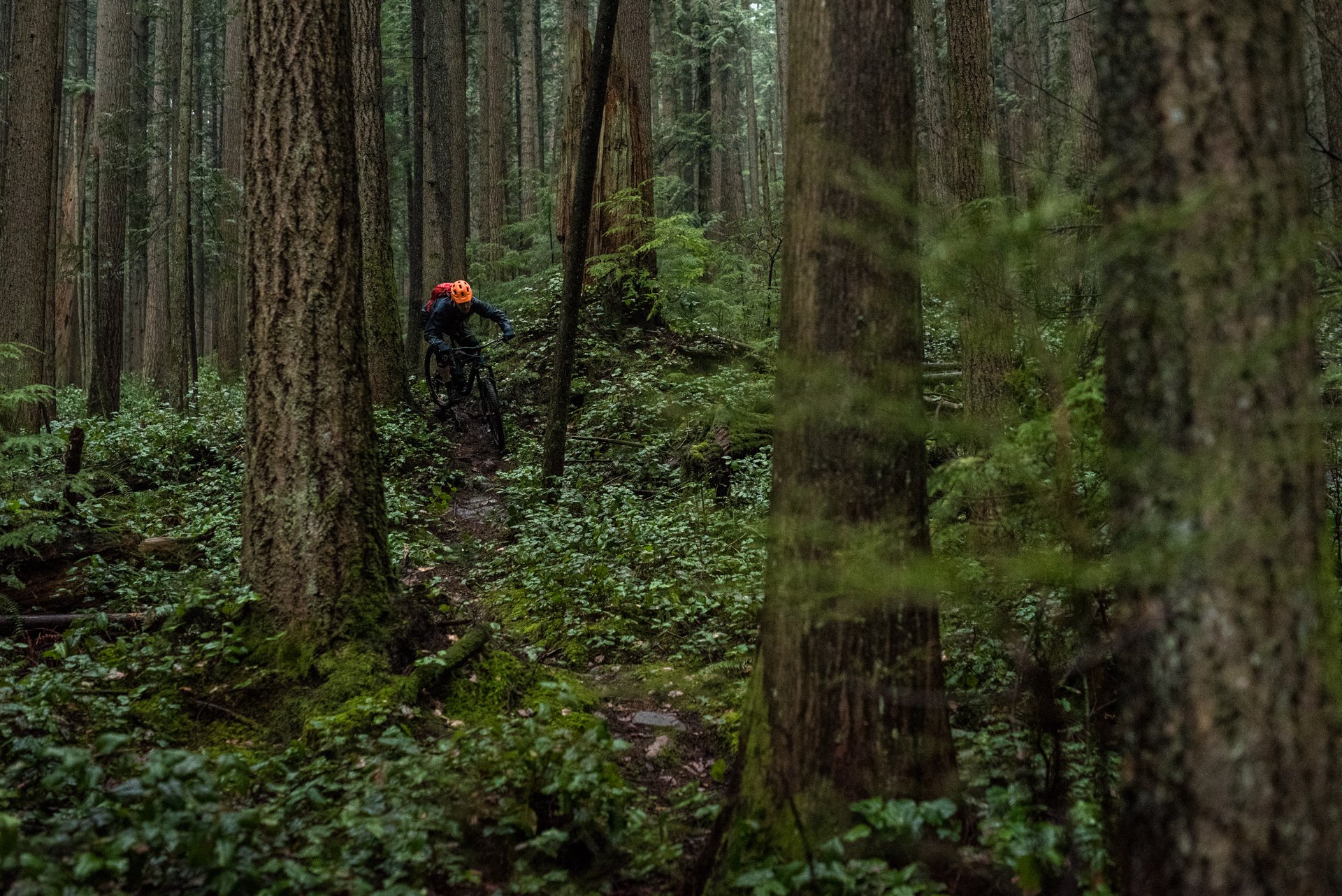 I mostly forget the Raptor is there while riding. 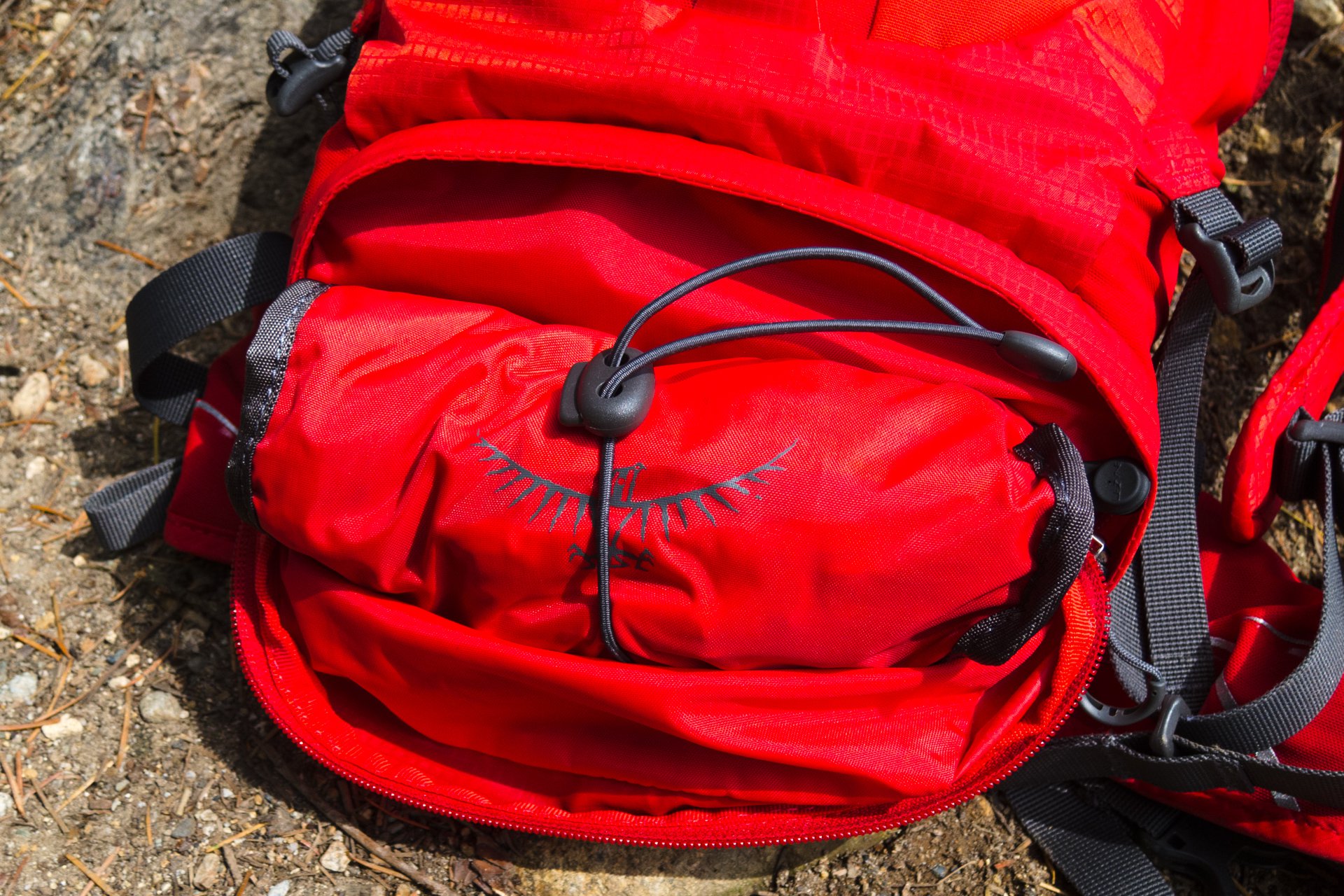 The tool pouch at the bottom of the pack is easily accessible. 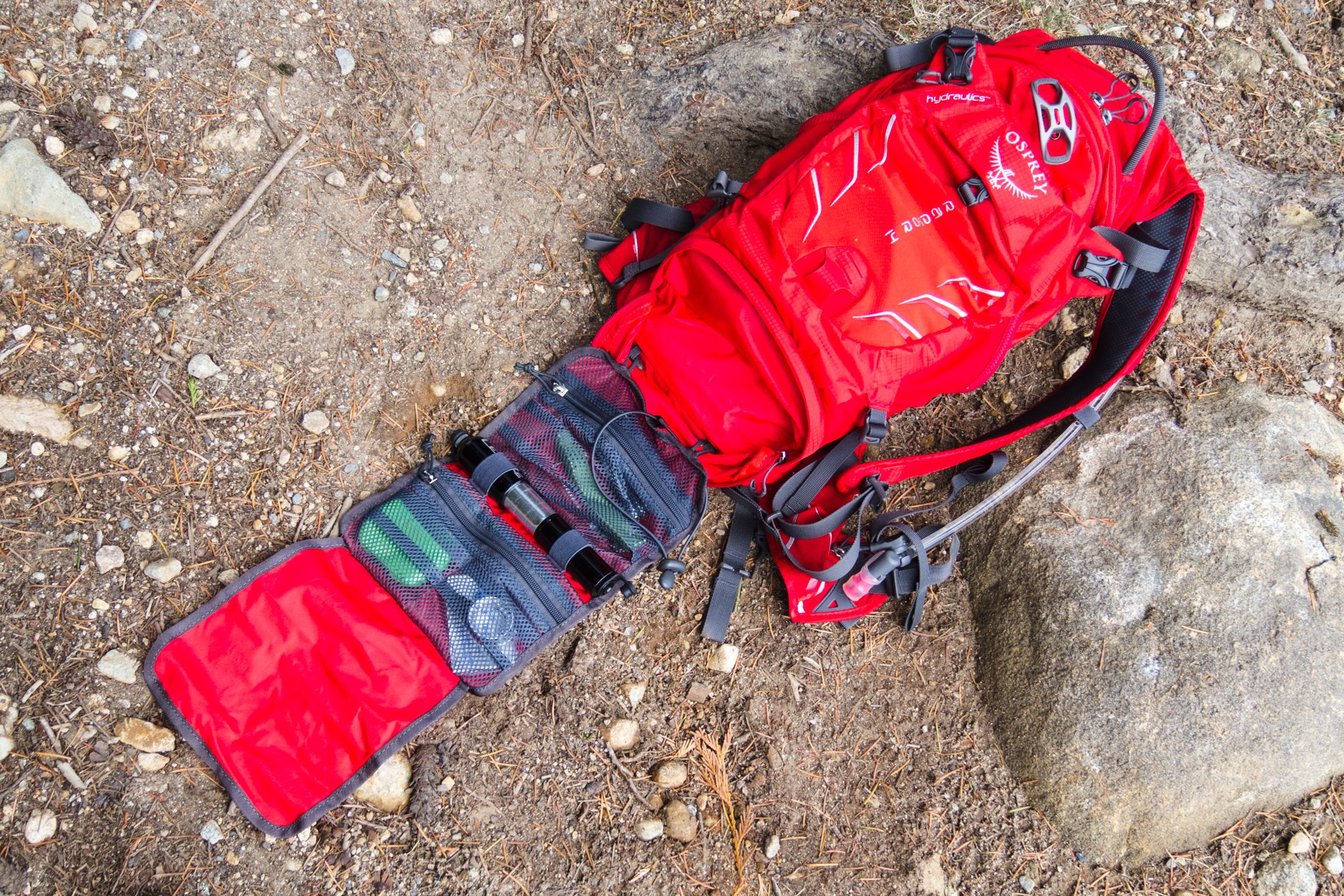 I also found that the zippered sleeve for the water hose made it super easy to install and remove the reservoir. No fumbling the hose and bite valve through a series of holes and loops. In front, the hose smartly attaches to the chest strap using a small magnet. Again, no fumbling with clips.

The space between the front pocket and the main compartment is great for stashing knee pads on the way up. It easily fits a pair of burly pads. You can also fit a trail helmet in there and fix it in place by pulling the 'lidlock' though one of your helmet's vents. I didn't use this feature (helmets don't work when strapped to a pack) but it's a nice option for long hot fire road climbs. 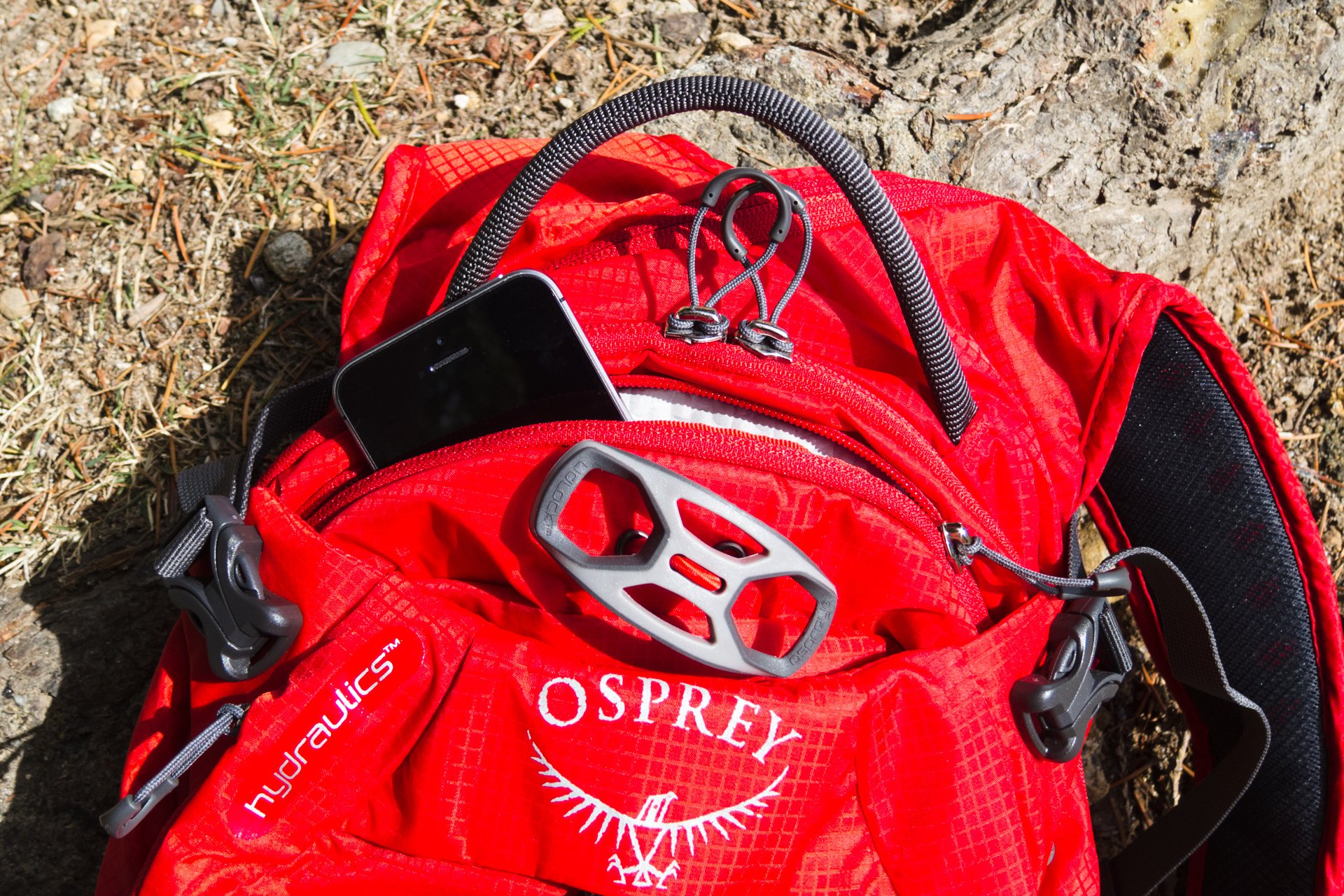 My iPhone SE drowned in the large phone pocket on top. It will easily hold the huge smartphones many carry with them these days. 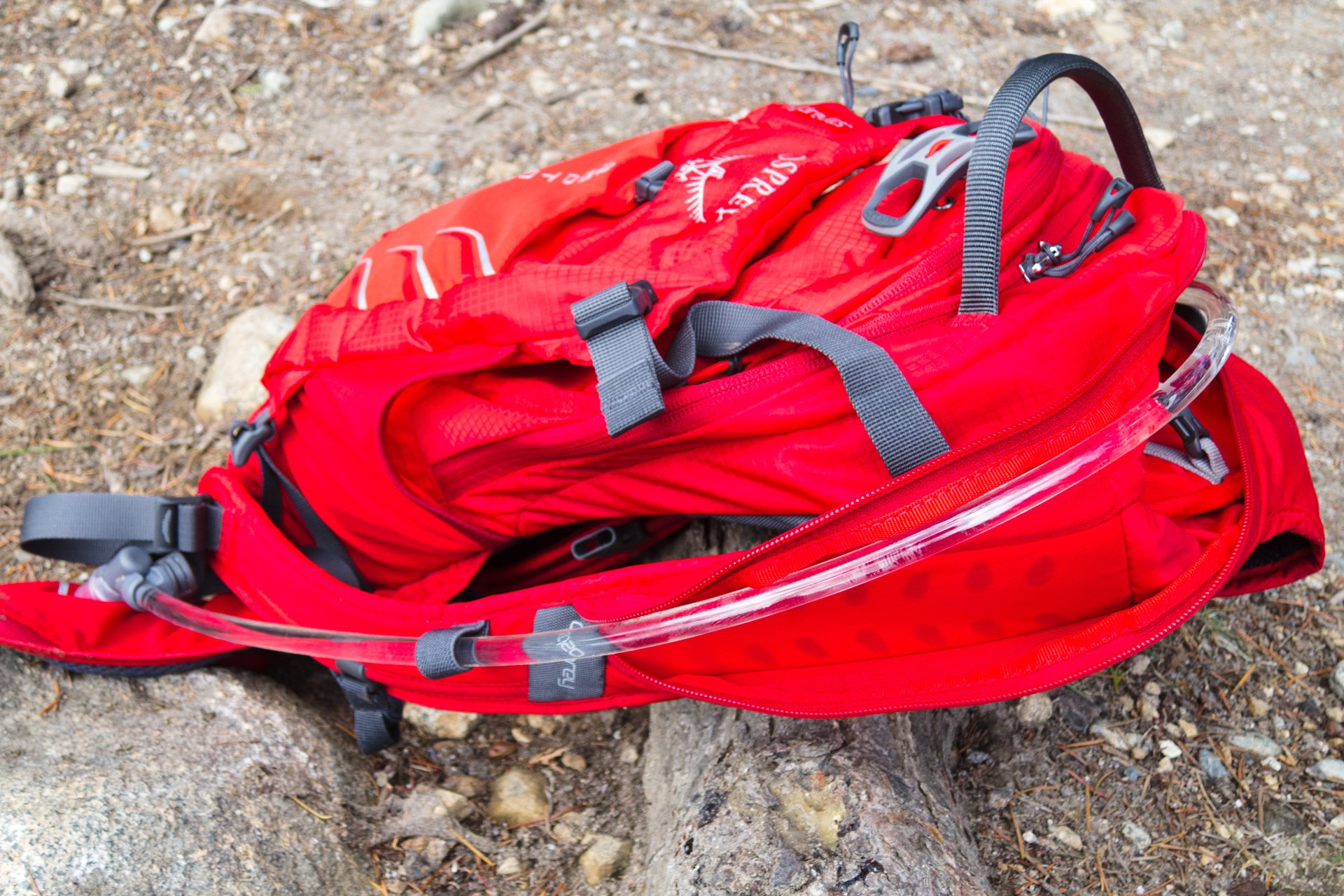 The hydration hose runs through a zippered sleeve which makes removing the reservoir very easy.

The not so much

While I like the way the reservoir is accessed and the hose attaches to the chest strap, I think the included reservoir itself has room for improvement. The bite valve’s water flow is too slow – as if you’re trying to suck a thick chunky smoothie through a narrow straw – and the open/close switch is too hard to move – I can’t do it with one hand. I also find the reservoir’s slide seal opening inconvenient in use. Even with the slider removed, the opening is still closed and you have to actively keep it open to fill it. Eventually, I replaced the reservoir with one from Camelbak that I had lying around. It fits nicely and I can even use the magnet on the hose. 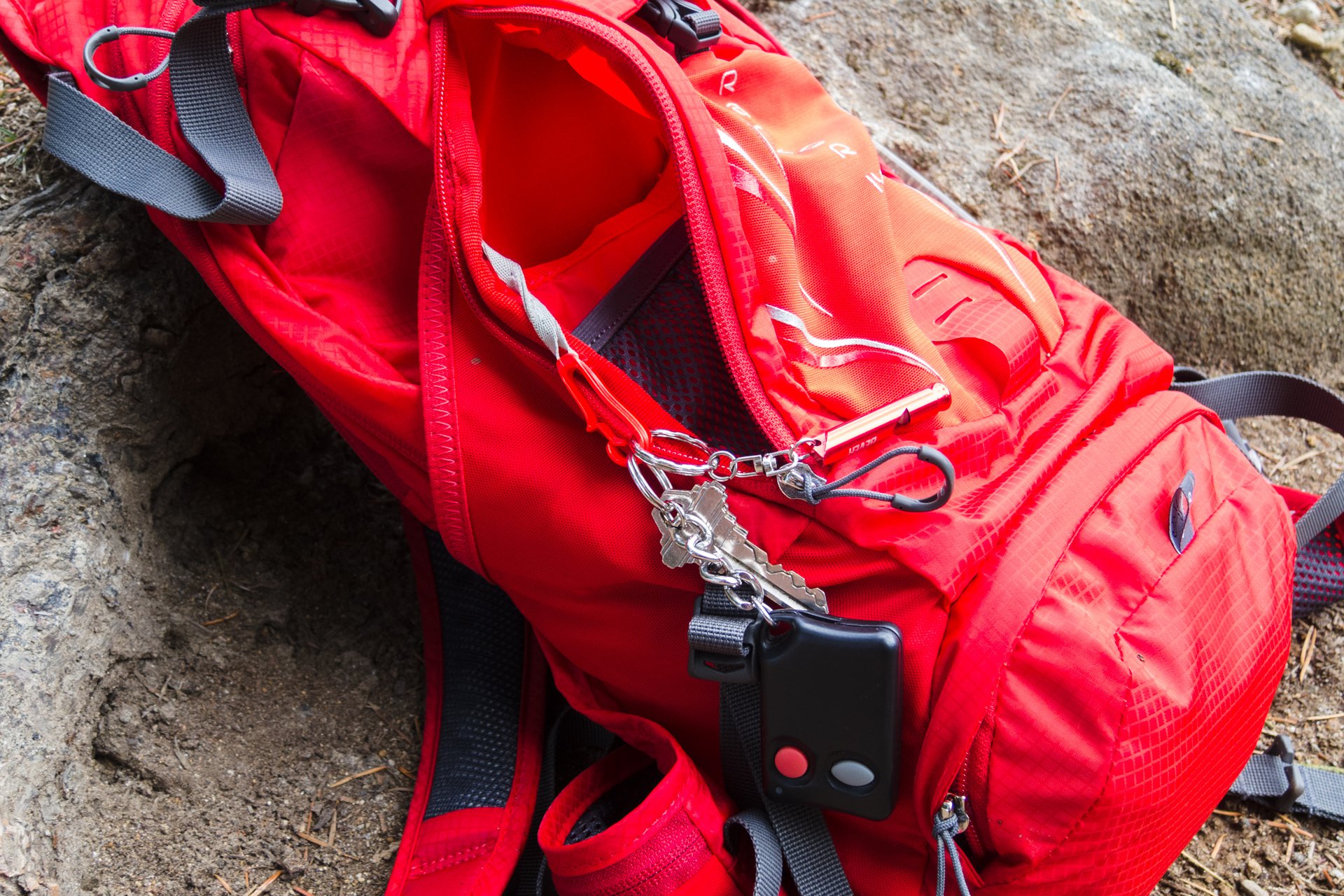 My keys fell out of the key clip half of the time. 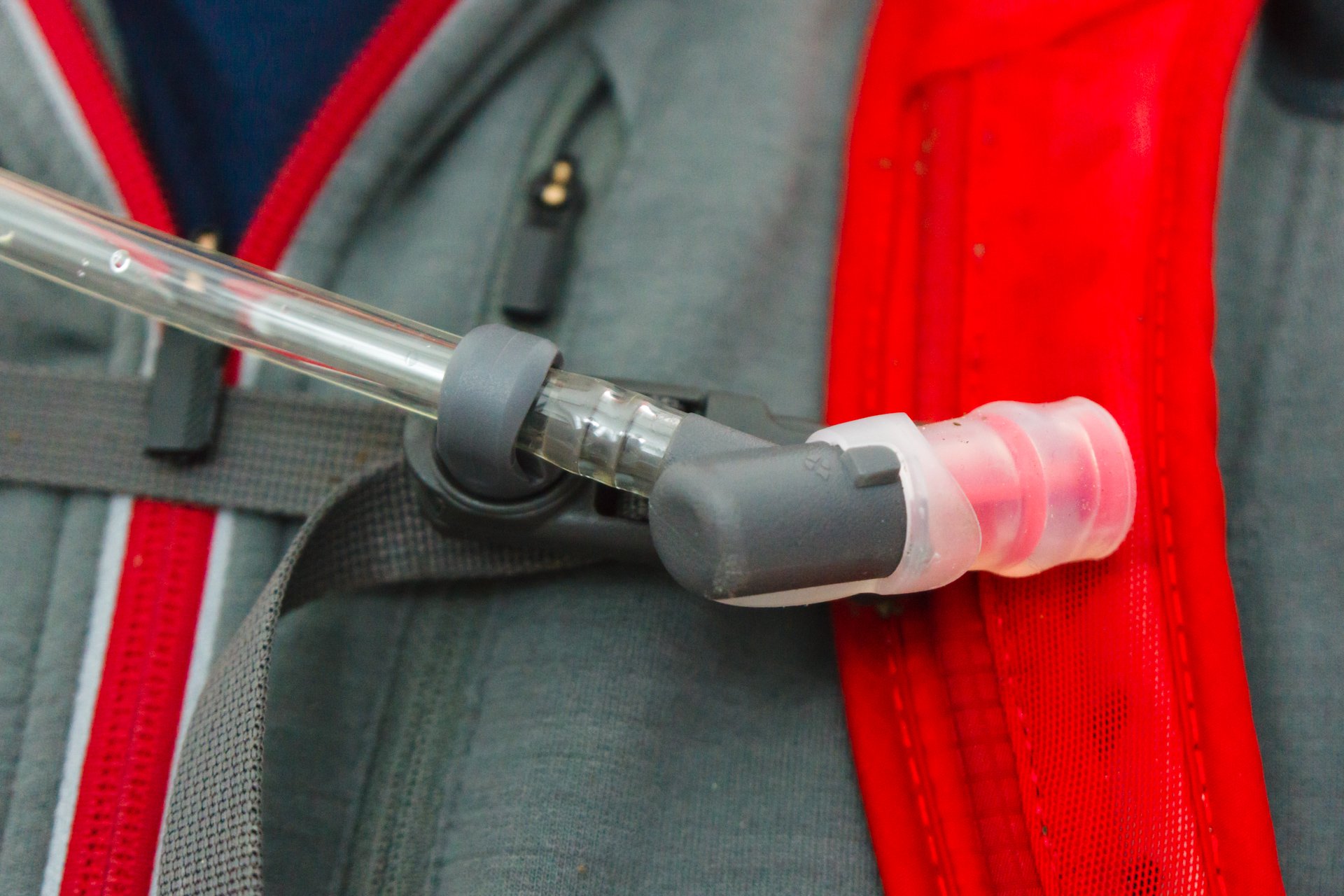 The magnet to attach the bite valve to the chest strap is cool. The bite valve itself not so much. The water flow is too slow and the open/close switch is difficult to move.

The plastic key clip in the front pocket is not tight enough to secure my key ring. At least half of the time my keys have come unattached by the end of the ride. I usually stuff the clipped keys in the mesh pouch as well so it hasn’t really been a problem but holding keys is the only thing a key clip has to do, so it was disappointing.

The Raptor is not waterproof (as was confirmed during our photo shoot in the pissing rain) and doesn't have an integrated rain cover. Osprey sells a separate rain cover but a generic 10–15L cover from MEC that I have also fit reasonably well.

A minor downside that may or not bother you is the fixed hose routing due to the zippered sleeve (if you like to run your hose on the left side you are out of luck). 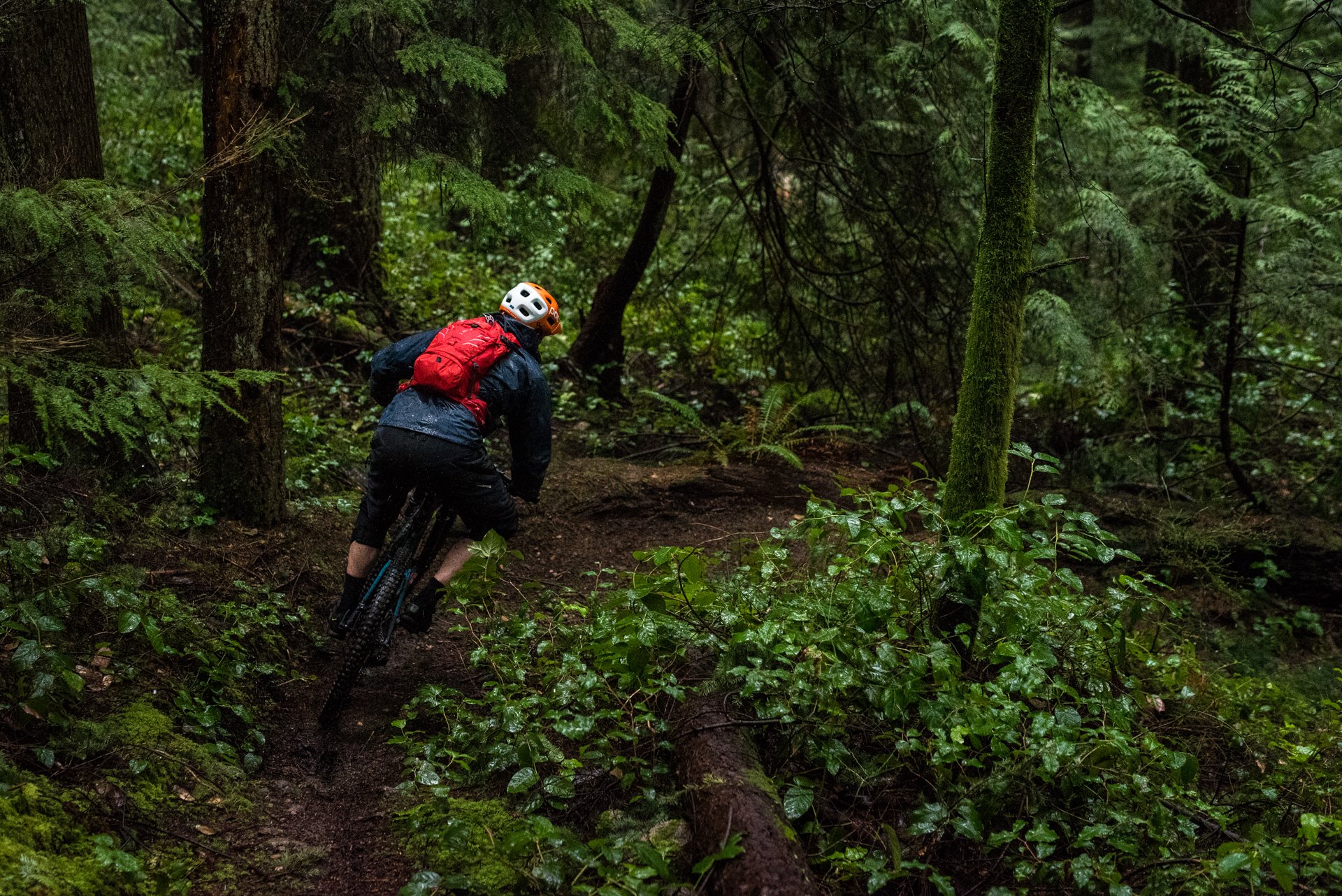 Overall, I think the Raptor is a decent pack that's very comfortable to wear. It has a couple of smart design features which make it easy to use and it has a couple of minor flaws that I'd like to see fixed by Osprey in a next iteration. My biggest issue with the Raptor is the included reservoir, which may be a matter of personal preference. If you're looking for a new hydration pack of this size, the Raptor is definitely worth a look.

I've had one of these for years. I've tried to substitute smaller packs but I keep coming back to the Raptor because it fits better and is usually lighter. I also hate the reservoir and will for sure upgrade it when I get around to it. I've never used that plastic key clip. There are plenty of secure spots for keys. I've never found the pack to be insufficiently waterproof. Probably the best pack I've ever had.

We may have different expectation regarding waterproofness. In my experience, it's is fine in drizzle or light rain but in a downpour it doesn't take long before stuff starts to get damp inside the pack. Personally, I prefer having a rain cover as backup for those occasions.

Thanks for sharing your experience. It's definitely a very comfy pack!

Disclaimer: I haven't taken it out in full-on downpours so my experience in this regard is limited.

What are peoples' favourite 1.5L reservoir?

I just bought a Source one as well. Seems okay.

Interesting how different everyone's personal preferences and experiences are!

The zippers on mine feel smooth and haven't given me any problems. And I'm a known zipper destroyer.

I found the Osprey reservoirs fine. Camelbak are better though. I don’t care for overly complex multi pocketed packs. The more simple the better. I have an Acre Houser that I like a lot more than my old Osprey which I gave to a friend. And why a pack would be made from anything but waterproof material is beyond me.

Why not waterproof? I guess weight and/or cost. I don't really care about waterproofness though because the only thing in my pack I would mind getting wet is extra layers — which I'd most likely be wearing in a downpour. If I happen to bring a camera, I'll put that in it's own dry bag.

+1 on Camelbak reservoirs. Especially the bite valves. Not crazy about the screw on fill caps, but I can deal. I had a Deuter res that had a zip top like the Osprey and I liked that feature a lot, but it was made out of a stiffer plastic which I didn't dig.

I've had this pack since january and really like it. Yes maybe there are too many pockets but the fit is brilliant. I like the reservoir, as though not as easy as a camelbak, its much better for cleaning and drying (have you ever removed the o ring on the screw in port in your camelbak and seen what collects there?), i may swap out the bite valve for something with more flow though. I'm not too bothered about the waterproofness as usually theres nothing in there that needs to be kep dry (usually my waterproof layer is in there, or not if its raining). I woukd like a waterproof phone pocket though! All in a great daily pack to replace my ten year old camelbak mayhem.

While ditching a pack may be a trend, i like to wear one for back protection. Also, it makes moving from one bike to the next easier as the pack (and its contents) goes wherever i go. Thanks for the review, this looks like a nice option and the tool pouch is great!

I am the only person who prefers the osprey reservoir? over the years a bunch of buddies have always had issues with camelbak reservoirs(hose coming undone from the bottom was the big one).

You guys don't think the Osprey bite valve takes too much effort to get the water flowing?

It's not that it's unusable, but there are other options that I personally like better.

I have an older Osprey and I really like the reservoir and bite valve. From your pictures it looks like you have a newer version. Still my favourite pack overall though. Comes on almost every ride I do.

Not too sure why it's not cool to wear a pack anymore. I've landed on my back after OTB and the pack has saved me damage more than a few times! I run a water bottle now too just to have a bit of energy drink for the long hot days.