Big cogs the size of a disc rotor are all the rage right now. You can’t ignore the popularity of the after market 42t cog for riders that want a 1x drive train but aren’t ready to make a wholesale switch to something new (and expensive). OneUp were one of the first to offer a retrofit 42t cog and many others have followed since.

I have been running the OneUp 42t cog since NSMB got their hands on one towards the end of last year. The ability to run a 1×10 set up with a reasonable spread of gears has sold me on this solution, but it isn’t without it compromise. The derailleurs that we are using, such as my Shimano XT, were never designed to work across such a large spread of gears, requiring an extreme adjustment to the b-tension screw to get the upper pulley to clear the large 42t cog. This means that in higher gears the upper pulley is further away from the cassette than is desirable, leading to somewhat more vague shifting than we have gotten used to with our modern drive trains.

The guys at OneUp obviously felt that this was an issue that they could fix using their design ingenuity. What they have come up with a new outer cage for the rear derailleur with a relocated upper pulley location. What’s that you say? Yes, you can switch out the outer cage on your rear derailleur, who’d have thought? 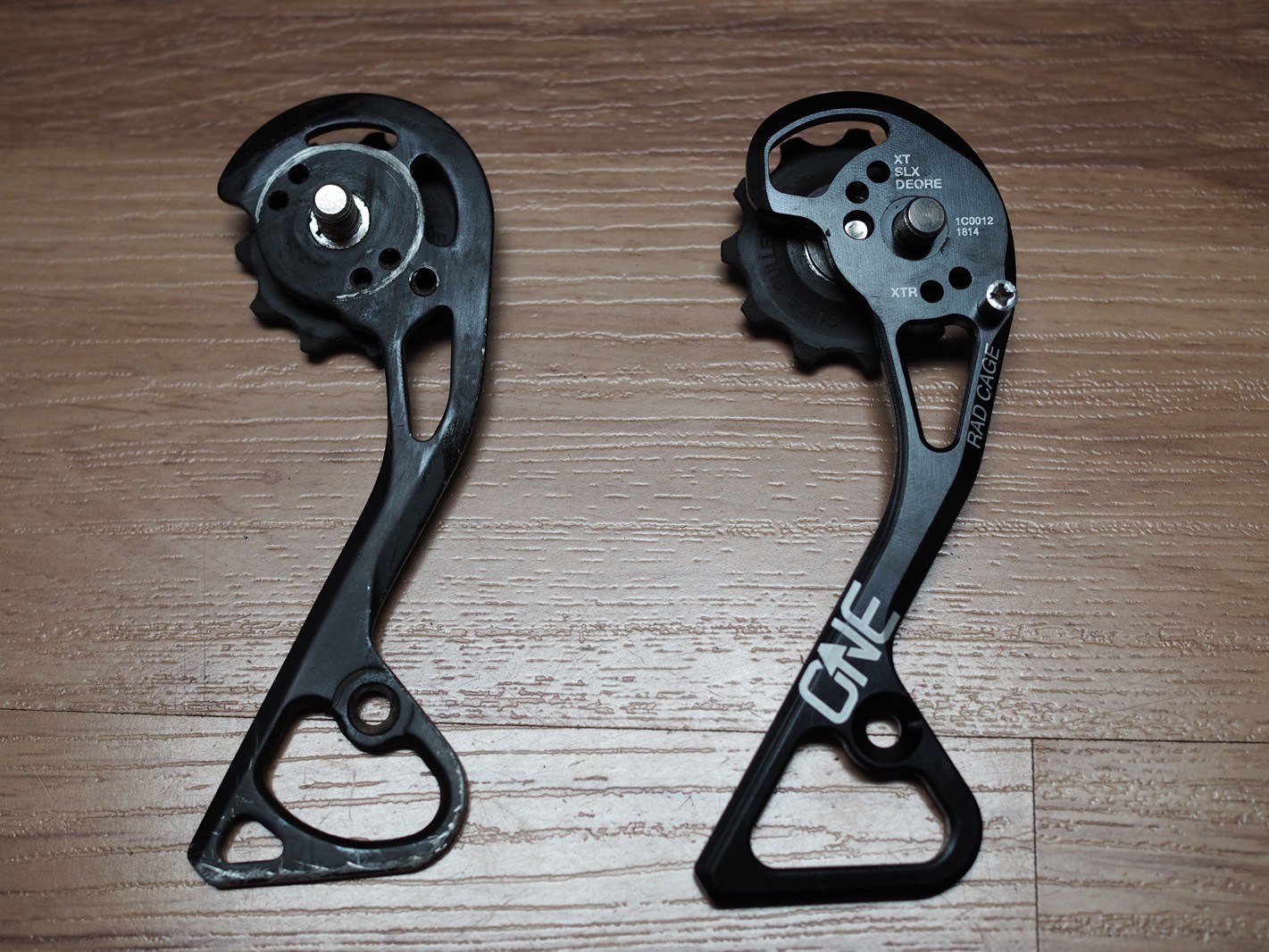 Old cage on left, new on right. You can see the new upper pulley axle location on the OneUp Rad Cage.

The result of this relocated upper pulley is that it tracks the profile of the cassette more closely and you don’t need to run the b-tension screw at such an extreme position as shown in my before and after shots. 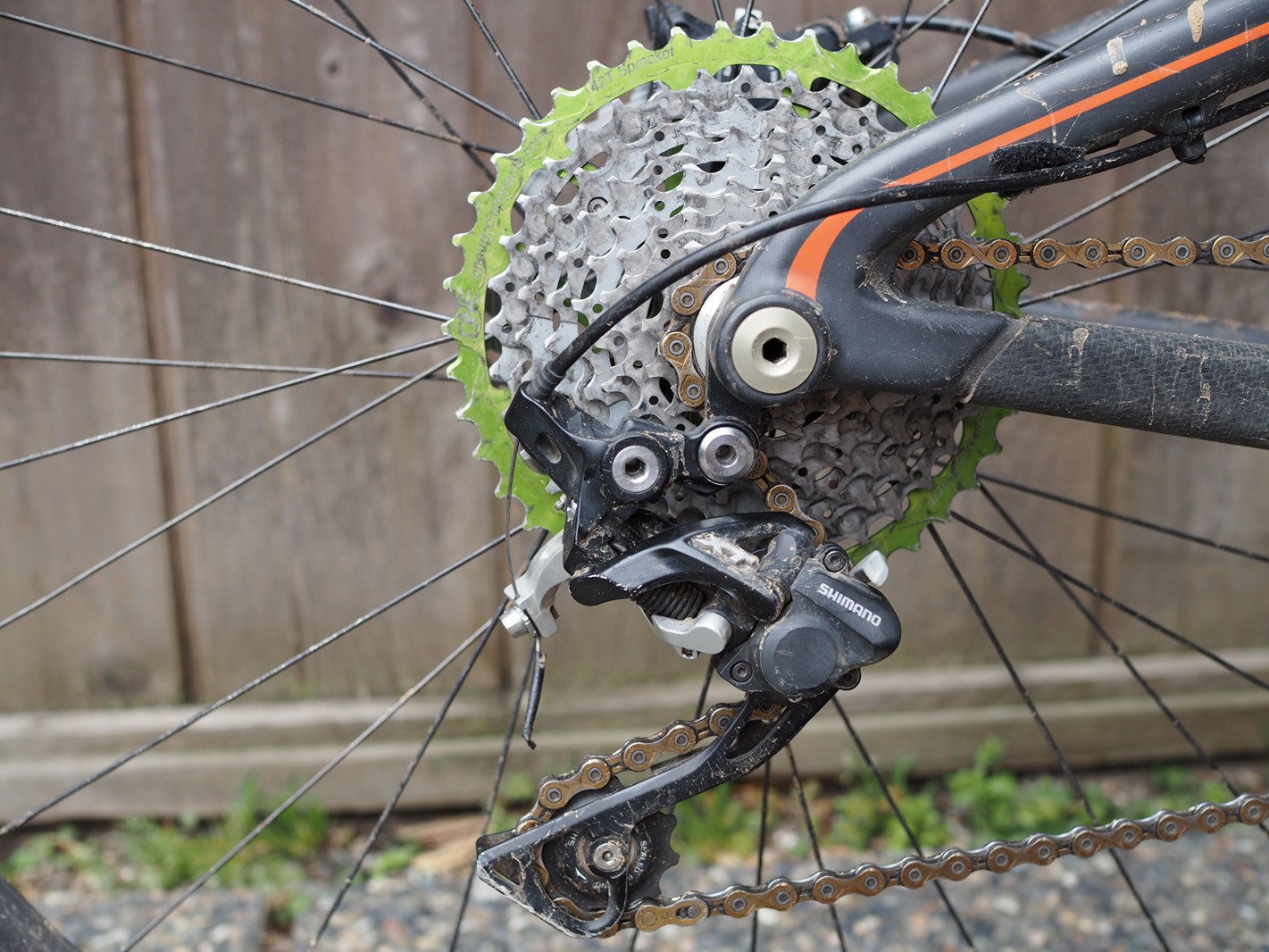 A pre-installation look at the cage placement. 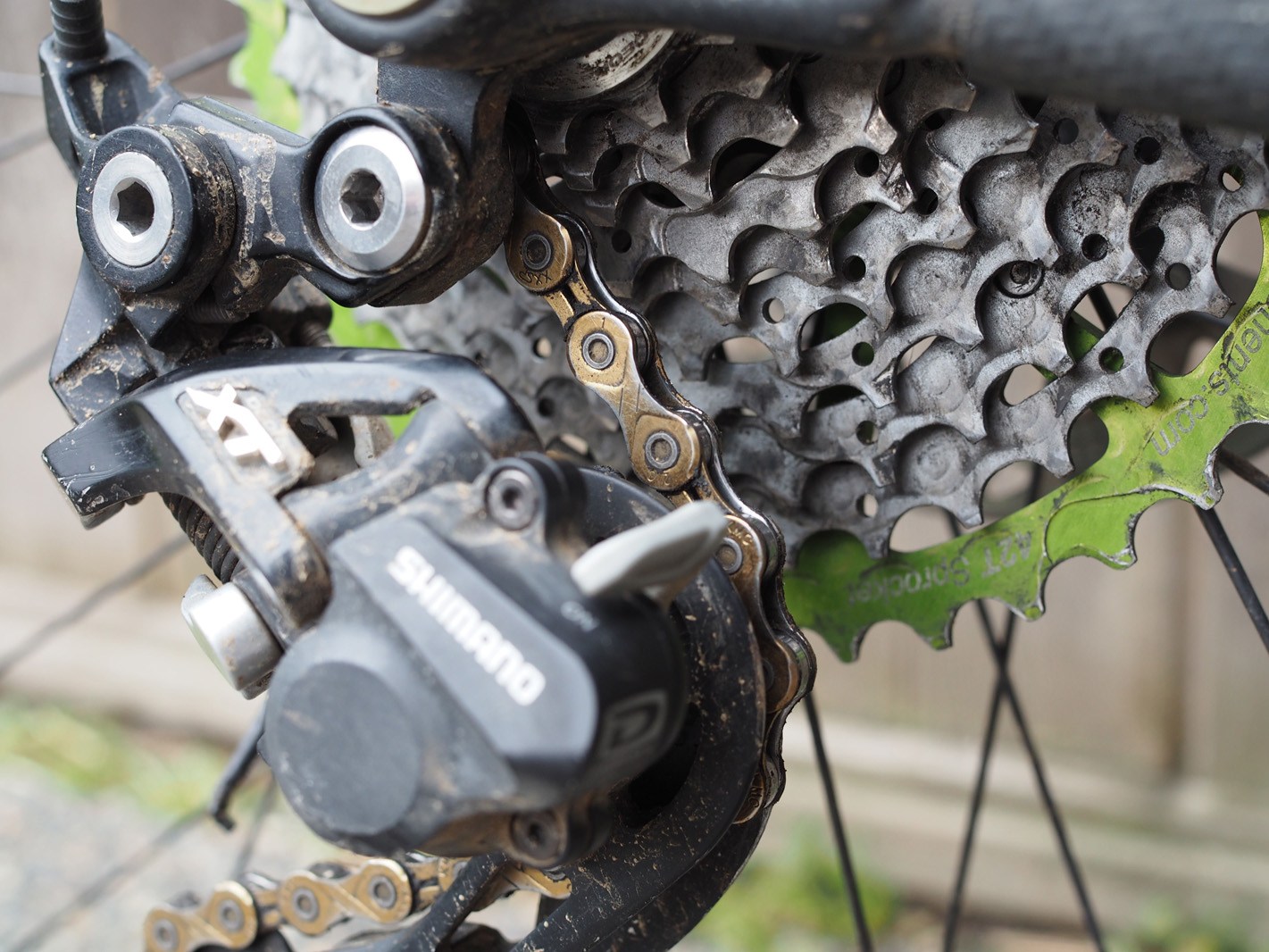 A closer look at the pre-install setup.

Fitting the new outer cage is definitely more involved than fitting the OneUp 42t cog. Basically you are dismantling your rear deraillieur switching the outer cage out for the Rad Cage and then reassembling. The OneUp guys sent over a video to lead me through the stages and although this isn’t a job that a novice should undertake, any competent home mechanic should be good with it. 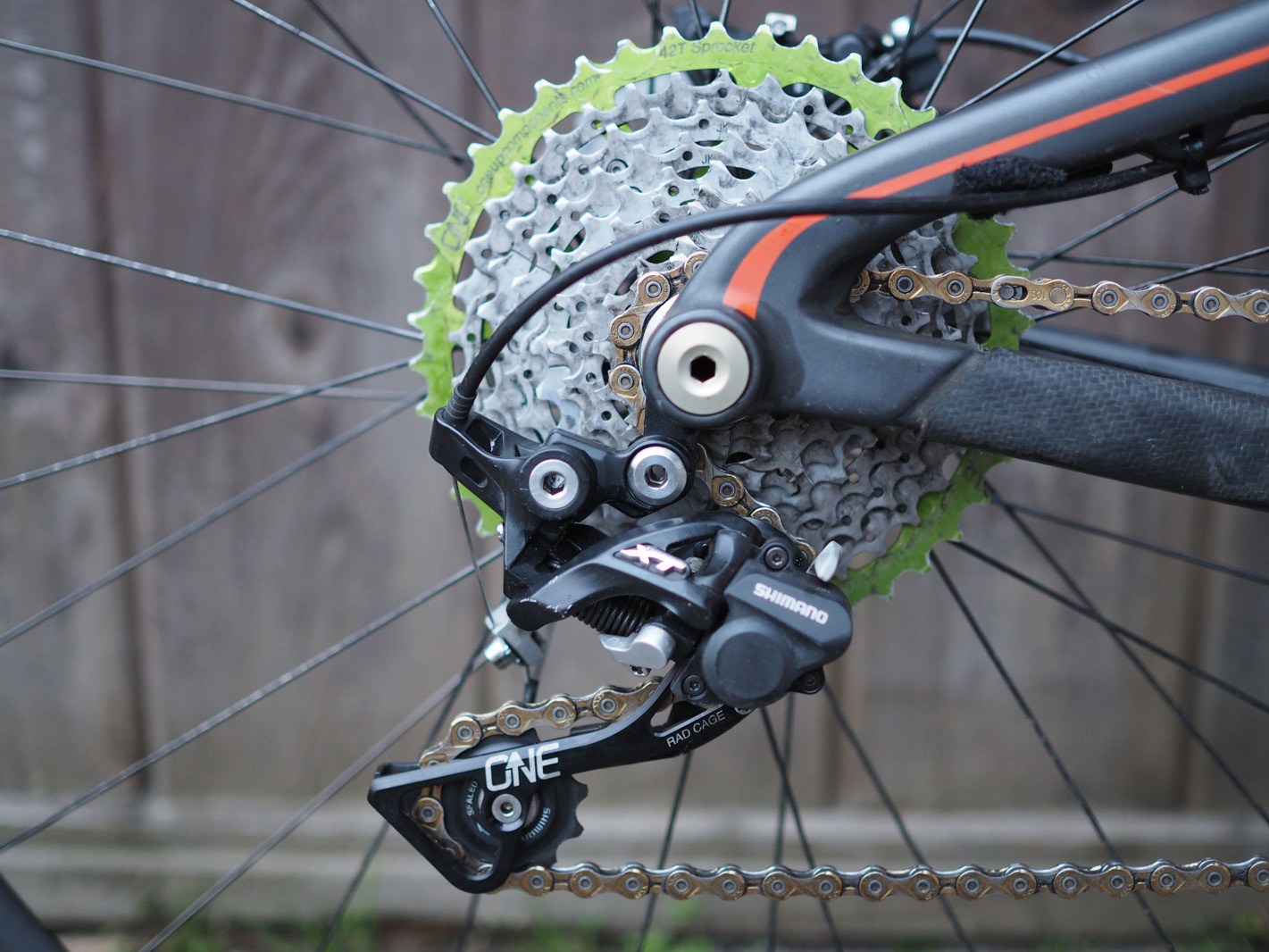 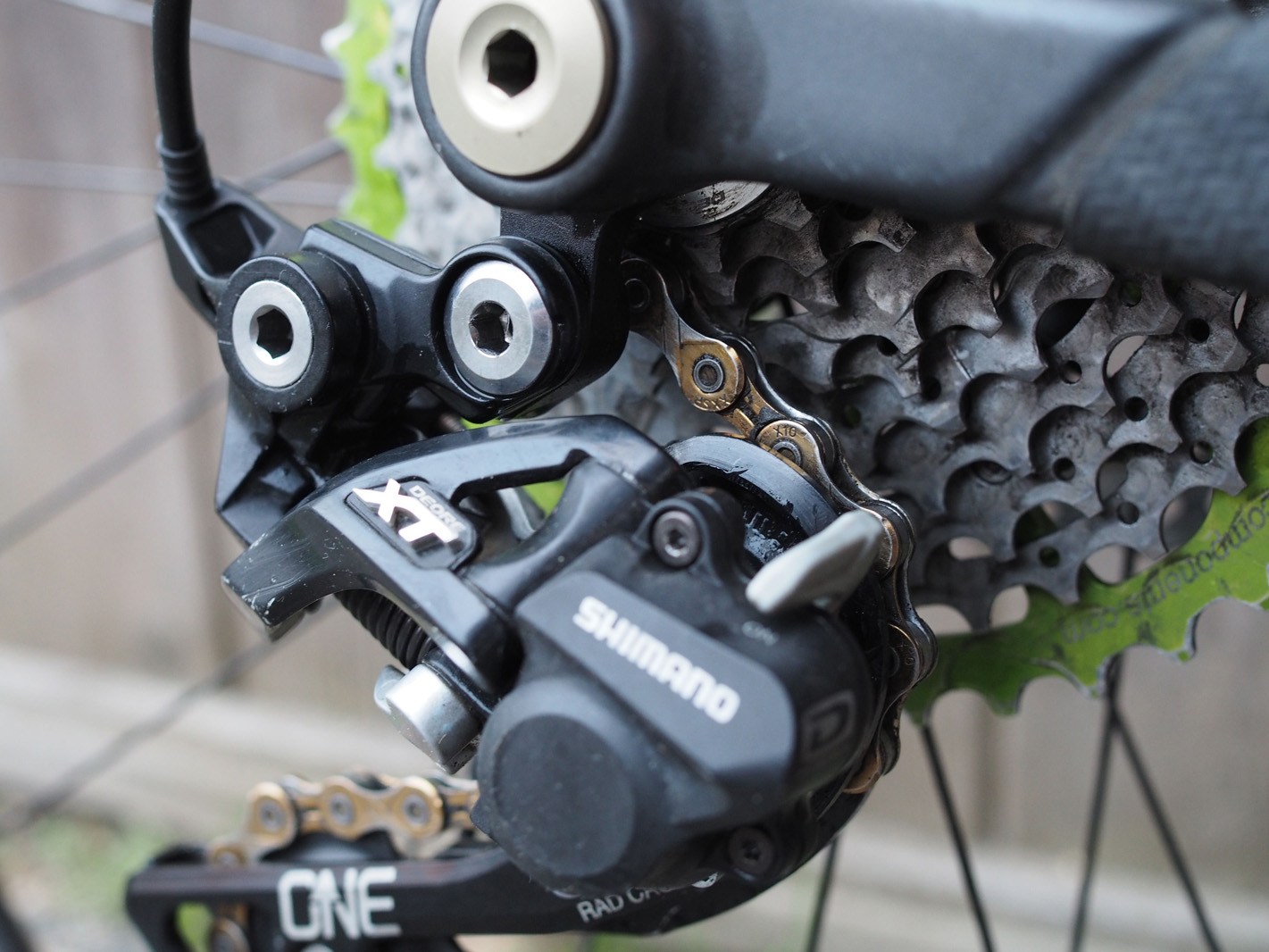 A closer look at the installed cage.

As a test for the new cage I fitted it a few days before I was entered into the Test of Metal. If anything can give you a good taste of how a new component performs it is when you are tired and mechanically unsympathetic to your bike. Quite quickly I noticed that the quality of the shifting in the lower gears had reclaimed some of the Shimano “snickityness” that had been lost. That lag from initiating a shift at the handlebar to having the chain engage on the chosen cog at the cassette had shortened, which in the heat of a race situation was welcome.

The only issue that I had was down to a mistake on my behalf. When I installed my OneUp cog initially I removed the little plastic piece that kept my b-tension screw in place so I could get the screw further in. Turns out that little plastic piece is quite handy at keeping that screw from winding itself out, especially when you don’t have lots of tension on that screw, like now that the Rad Cage is fitted. About 50km into the race my b-tension screw backed out to the point that the cage on the rear mech was catching on the big cog, preventing it from dropping into the higher gears. Once I figured out what was going on it was a quick fix, but I was cursing myself at the time. Hopefully if you decide to go with the RAD Cage then you still have that little plastic piece, or I would suggest some PTFE tape or a little Loctite to keep that b-tension screw in place.

In the cut and thrust of a race I noticed the improvement in shifting across the cassette with the Rad Cage. While I don’t ride like that all the time, knowing that my setup isn’t as compromised in certain gears does take away some of the thought process about when to make your shifts. For those of us still waiting to see the trickle down of 1x drive trains, especially for Shimano lovers, this solution from OneUp should see us through the next 5 years happily.

The Rad Cage can be ordered directly from OneUp for $35 US.

Out of the articles I've read about the RAD cage, this is by far the best one. Well-written from hands-on experience.

The comparison of the before/after images pretty much sealed the deal on me buying the RAD cage… Thanks!

I tested this not knowing what it would retail for, I'm surprised at how reasonable the price is given the step up in shifting crispness.

Considering the cogs are now shipping with a free 16T and this is reasonably priced at $35, OneUp is going the extra mile in terms of creating solutions and continuing to service them.

A very reasonable $35USD. Sounds like a win to me!

So what's the price?