I understand that the market for this drivetrain hop up, from Squamish locals OneUp, is going to be pretty small right now. There aren’t a bunch of folks rocking the new XTR or XT setups on their bikes just yet, but as SRAM and Shimano sort out the world of 1x drivetrains, the OneUp 45 tooth sprocket combined with a Shimano 11-spd cassette could offer a prime set of ratios in the 11-speed world. NOTE – the 45 is only compatible with the 11-40 XT cassette and not with the 11-42. 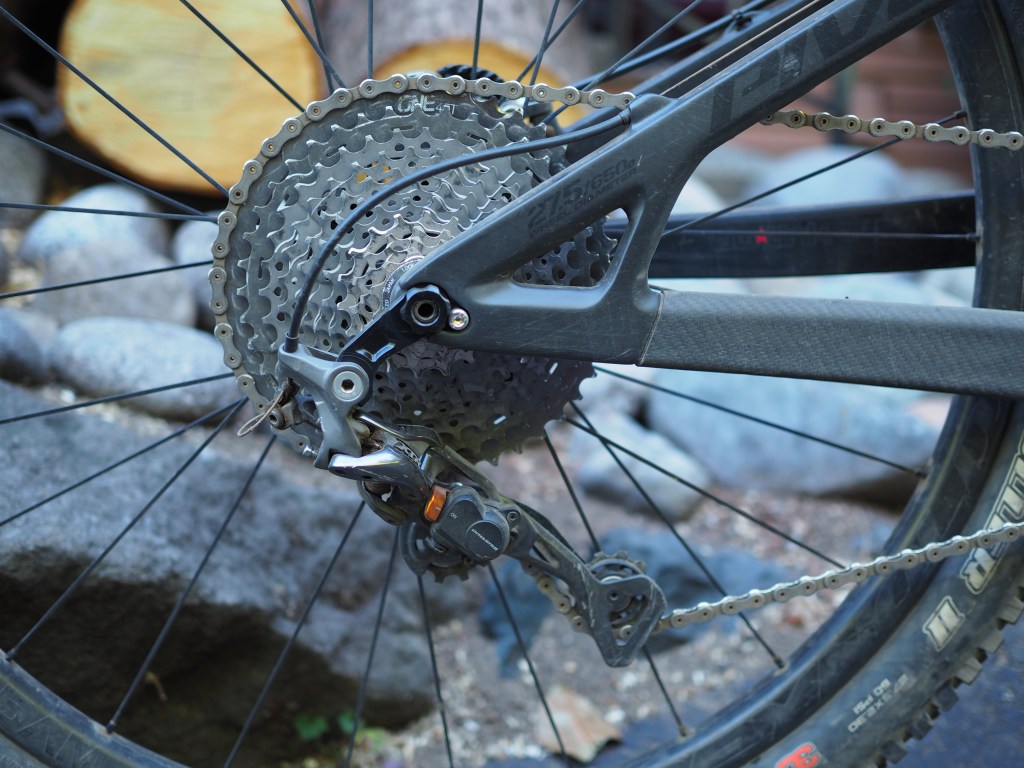 The subtly anodized grey OneUp 45t cog hides behind the rest of the XTR 11-speed cassette. This cog is huge and dwarfs the brake disc behind it.

When Shimano finally released their reaction to the SRAM XX1 drivetrain, in the form of the new XTR, there was mass derision from the internet hoards. The sticking point? The 40 tooth largest sprocket. Before fitting the OneUp upgrades I had plenty of time riding the XTR setup. As you would expect, crisp smooth shifts and a sense of solidity massages the digits as you shift up and down the cassette. I had a 32 tooth chainring paired with the 11-40 tooth cassette, which despite a great spread of gears, didn’t quite give me the climbing gear I needed without my kneecaps wanting to pack their bags and head to Hawaii. 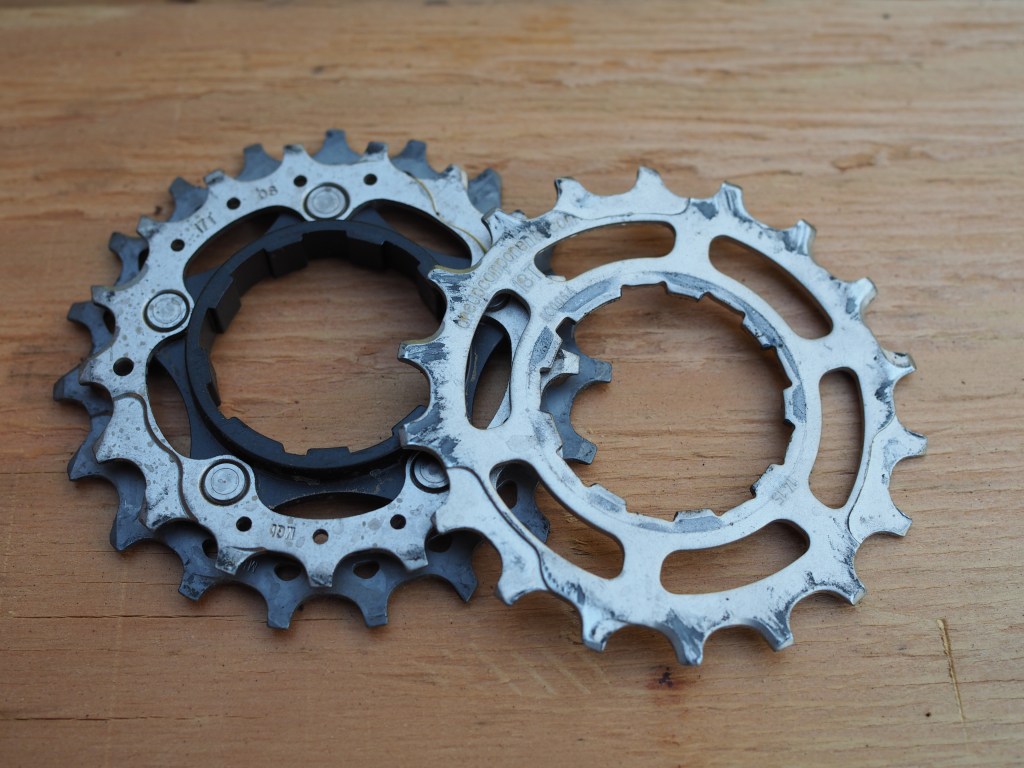 The 45t cog obviously goes on first and to make room for it lower down the cassette you swap the 17t and 19t cogs for the supplied 18t.

The aluminum 45 tooth sprocket is huge; it dwarfs the 32 tooth chainring OneUp sent to use with the sprocket. Also in a departure for OneUp, it is anodized an XTR compatible grey. Folks that have the cash for XTR are obviously a little more concerned about aesthetics and a bright green sprocket just wouldn’t do. OneUp also supplies a hardened steel 18T sprocket which replaces the 17 and 19 tooth stock XTR versions. For weight weenies this set up adds about 65 grams, so get your drill and ventilate your cranks to get that back(note – not actually recommended). 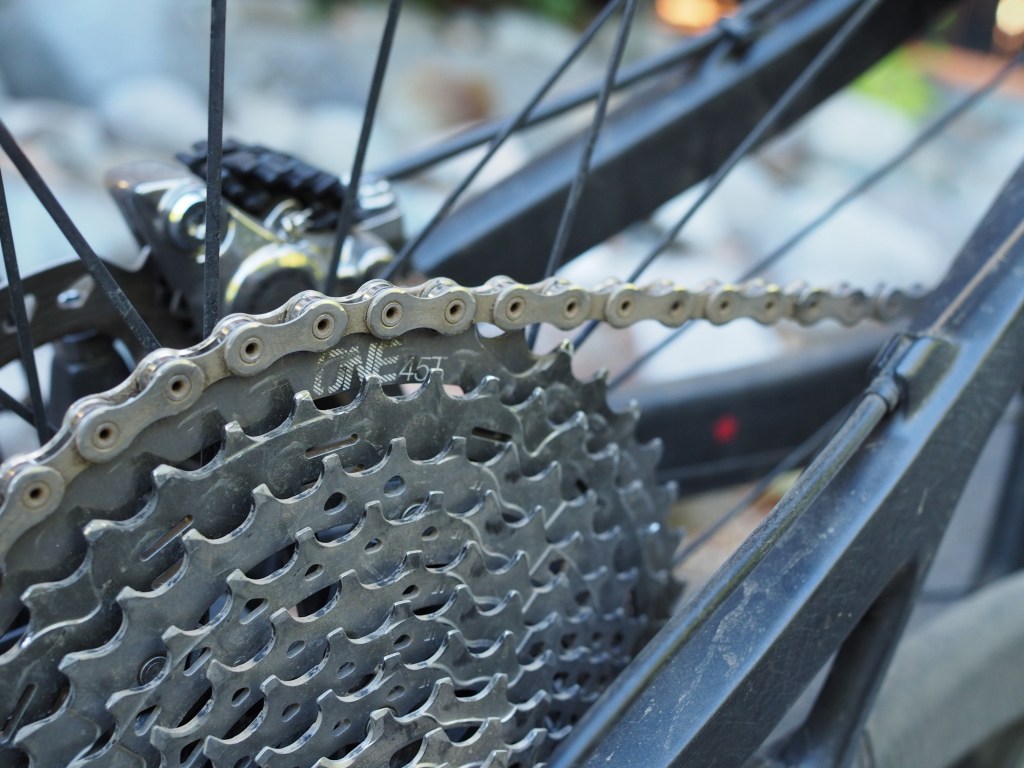 The shifting with the OneUp set up installed is exactly the same with the stock set up, slick. I did notice a touch more drive train noise with the larger cog but that could be down to the chain line when running this gear.

The addition of the 45 tooth sprocket requires little change to the mechanics of the bike. The new 11 speed XTR rear derailleur requires a minor tweak to the B-tension to clear the larger sprocket, but once that’s taken care of chain wrap is very good.

The dinner plate-sized cog doesn’t compromise the silky Shimano shifting and the ratios are nicely spaced with no awkward jumps. The combination of the 45 tooth sprocket with the 32 tooth chainring gave me the ratio that I needed for everything but the steepest climbs. I think that if I lived in Whistler I’d switch to a 30 to get up the steeper grunts, but for most of the climbs I do the 32 did the job. 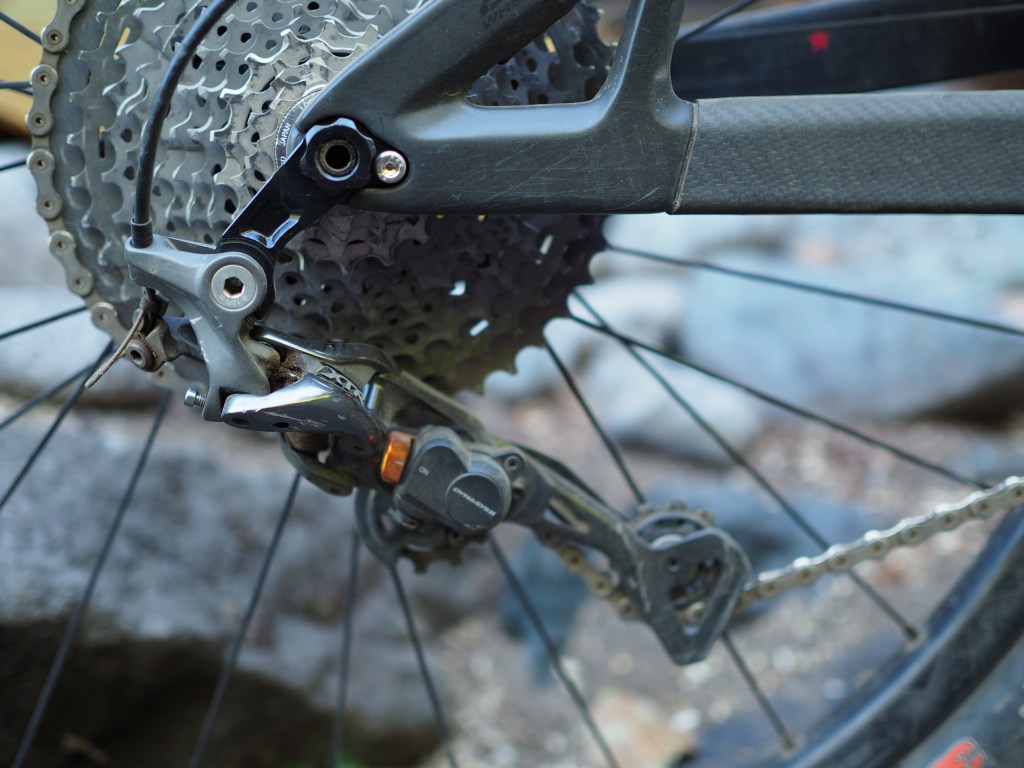 The new XTR rear derailleur requires a minor tweak to the b-tension screw to cope with the wider spread of gears and maintains good chain wrap around the larger cog.

There was a touch more drive train noise when using the 45 tooth sprocket, maybe due to the chain line on the bike I was riding. It wasn’t much more than a slight increase and interestingly, it was more noticeable with the stock Shimano 1x chainring than the OneUp narrow-wide ring. Perhaps those taller profile teeth on the Shimano ring make the difference?

If you are one of the fortunate few to be riding the new 1x XT or XTR then the OneUp 45 tooth sprocket is a worthy upgrade. Those of you who aren’t looking for a lower granny gear can benefit from a 12.5% increase in range, allowing you to fit a larger chainring. I was looking for that climbing gear and the upgrade delivered that without any downsides.

OneUp’s 45 for XTR can be ordered directly from their web site. It’s $104.99 for Canadians and $90 US for the rest of the world – with free shipping. More info here.

Anyone lucky enough to be rocking the new XTR setup?

Wouldn't it be easier to switch to a smaller chainring? Or do some squats?

Seriously? I thought you were smarter than that?

The chainrings suggestion or the squats?

I have a 28 x 45 on my bike… can tackle absolutely anything with that spread… he just needs to add a few links to his chain.

I run an Absolute Black 26 narrow/wide on XTR inner bolt circle with the XO 10/42 11 speed set up. The chain line is perfect and my rear mid-cage derailleur works in every gear and does not get past 45 degrees.

Did you had any problems with the chainline? I snapped two chains just try to figure out why

That rear derailleur appears to be begging for mercy!

I've been rocking this set up on both my bikes for a while and it's awesome. One has the same gearing as you, Jon, and the other I have a 30 t chain ring and use the 45 for a bail out gear. A couple of things I noticed with the 45. First, chain length on some bikes is exact. On the 275 Nomad, there was almost no chain tension in the 11 t cog and the derailleur only has a bit of play left in the 45 t cog with the suspension bottomed out. However, with a bike with less chain growth (Knolly), the conversion was super simple and had some room for error for the chain length. Shifting is also very slightly worse with the OneUp. Most of the cassette is fine, so is the 45 t, but you'll notice the difference going from the Shimano cogs to the 18 t OneUp cog. Having said all that, I would buy it again in a heartbeat. I love the bail out gear on one bike and I love that I have a little longer gear on the other. I bet OneUp will sell a bucket of these when the new XT comes out.

Its so confusing. You're a weight weenie, and then pull stunts like this. Its unsprung, rotating weight!

On 10spd, I think the worst part of the OneUp is the shifting around the 16t. Its slightly awkward jumps, and not quite 'Shimano' grade shifting.

Very true. But I'm also old with old knees! It helps us old buggers keep up with you young whippersnappers!!

I just wish MY M6C had XTR like the demo NSMB has….

Might want to add a link to your chain…