One of Many – Della Creek Dog Fighting 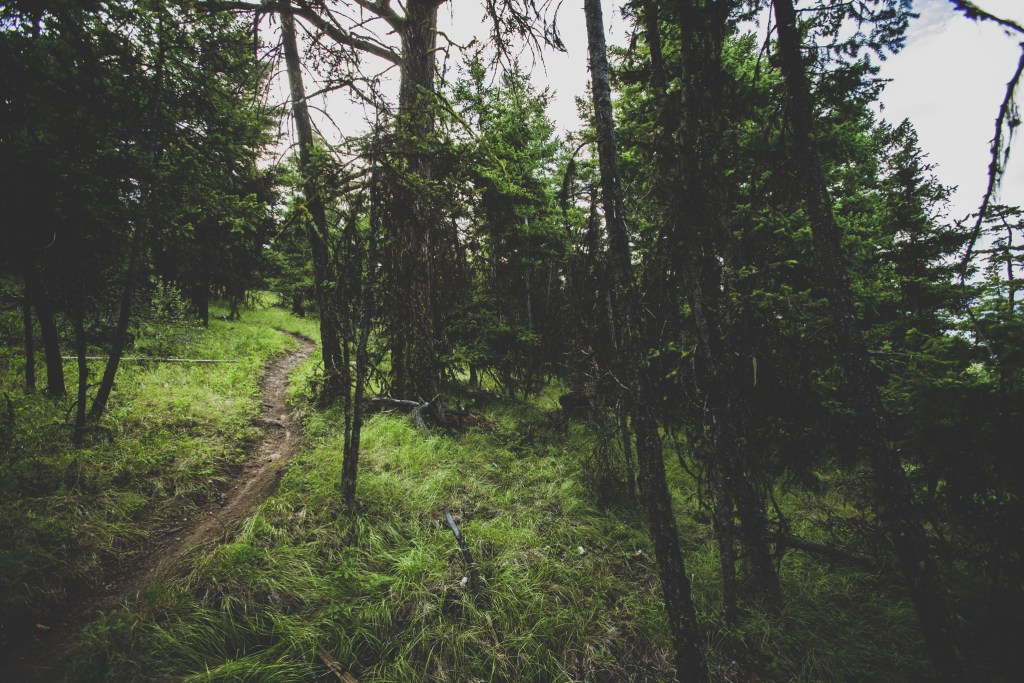 Whether beaten into submission by machines, carefully sculpted with blistered hands and simple tools, or worn into being by centuries of animal traffic, each trail is as varied as the people who ride it. The trail’s story changes with each passing rider — every one of them having their own distinct perspective and definition of speed, space, time,adventure, danger and awesome — and each is another One of Many.

The following is One in a collection of short stories from three different trips to three different trails. If presented as simple trail beta, these pieces might detail the dirt — and a turn here, a climb there, a drop after that. But seen through the eyes of each of these riders, these stories represent unique experiences — One of Many stories that happen each day.

You are one of many. What is your story?

SRAM’s One Of Many pop-up store opens on the 8th of August, and runs the duration of Crankworx, Whistler. It’s located on the Village stroll and is open daily from 9:00 AM until 6:00 PM. So—stop by, have a coffee, and share one of your many stories.

Della Creek, Lillooet, BC, late June. A haze of wildfire smoke casts a hazy veil across
the high-noon sun, air turbid with exhaust from the timber crematorium 20 kilometers downwind and the shimmering distortion of the summer heat rising from the parched ground. Up here, among the scorched and baked earth, where
Ponderosa Pine, Prickly Pear Cactus, Sage and Juniper sparsely populate the landscape, the only sounds are of the grasshoppers clicking away and helicopters dropping payloads of water on the flames. Far below, perched upon the nutrient-rich bench that overhangs the mighty Fraser River, there are ranches that rear provisions and farms that cultivate fare.

Everything is a little calmer from where I stand, up here at the trailhead of Della Creek. For just a moment, at least. 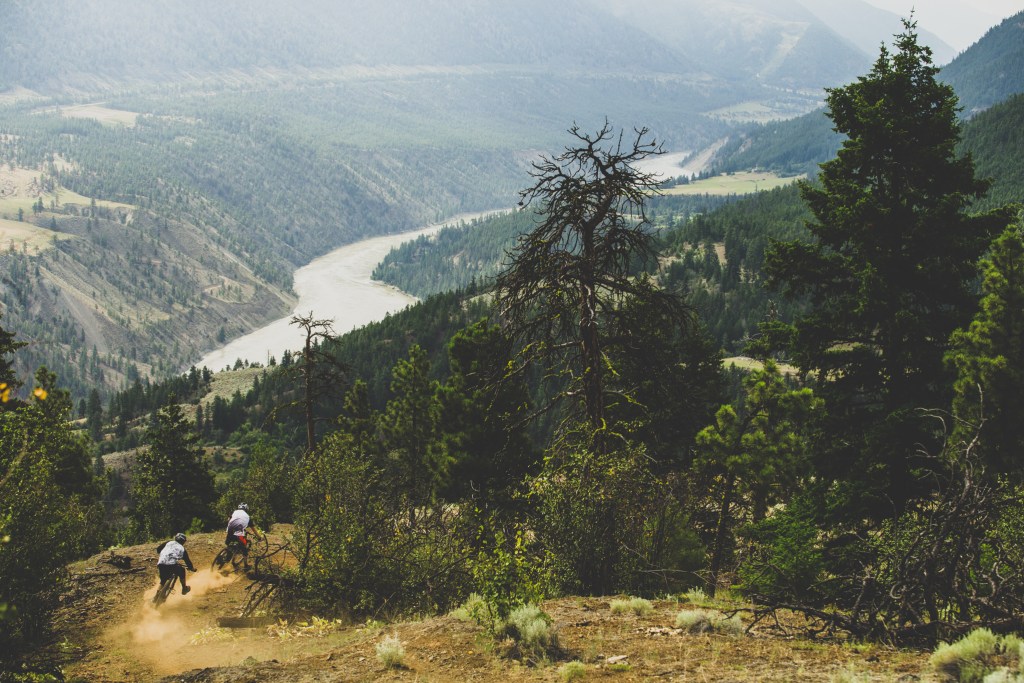 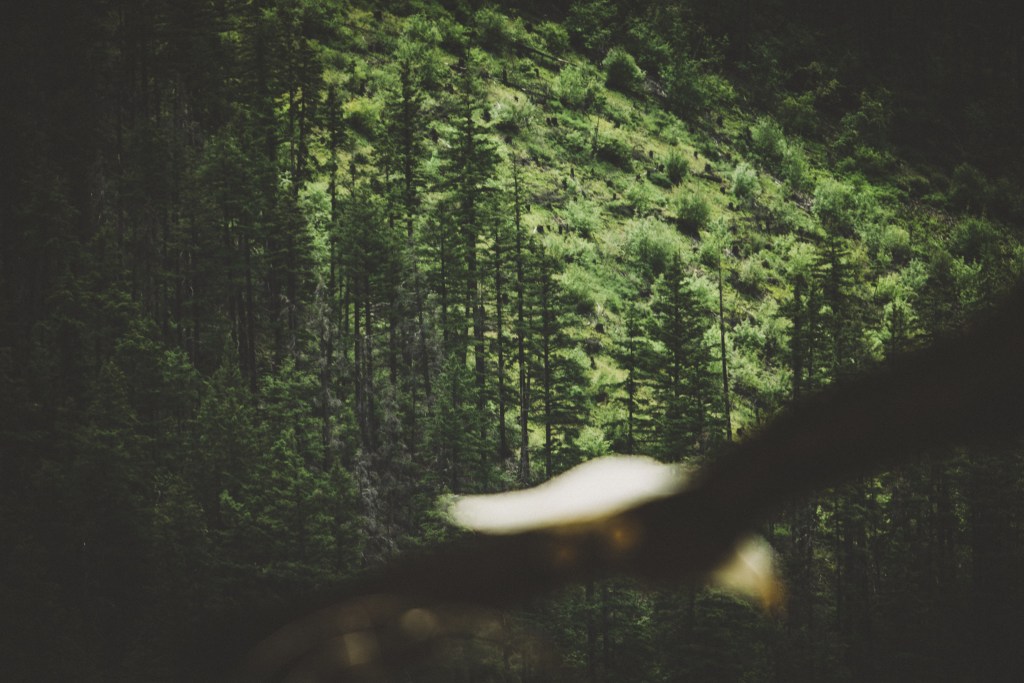 Camp has been set, tents erected, matts unrolled, chairs unfolded, coolers hidden in the shade, BBQ placed just so, coffee pot ready to go. A fine campsite: one part crow’s nest with a panoramic view of the world below and one part hideaway from the grueling heat of a summer that has come on strong for this time of year. We’ve given ourselves a day and half of recreation, amusement and the unscheduled pleasure of camp-life living. No phone, no internet, no work, no chores, no duties, no blame and no fault — just the loose pattern of eating to satisfy our appetites,
drinking when thirsty, and then sleeping when the batteries need recharging, be that during morning, noon or night. The only certainty is that we’re here to ride the trail from camp down to the valley floor as many times as is needed to sort the flesh from grey matter, then piece it back to together as a simplified, stripped back, hot rod of the person that wheeled in. When we leave, we’ll be leaner, pared-down forms of ourselves that show both the patina and the polish of navigating a speeding bicycle safely through the space and time that the Della Creek trail exists within. 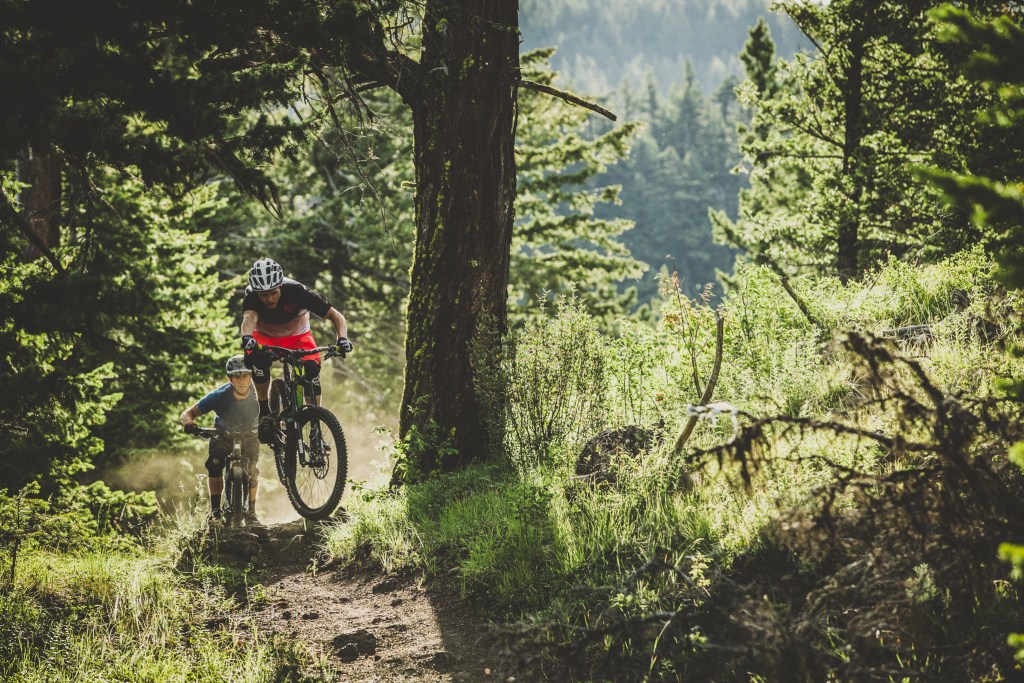 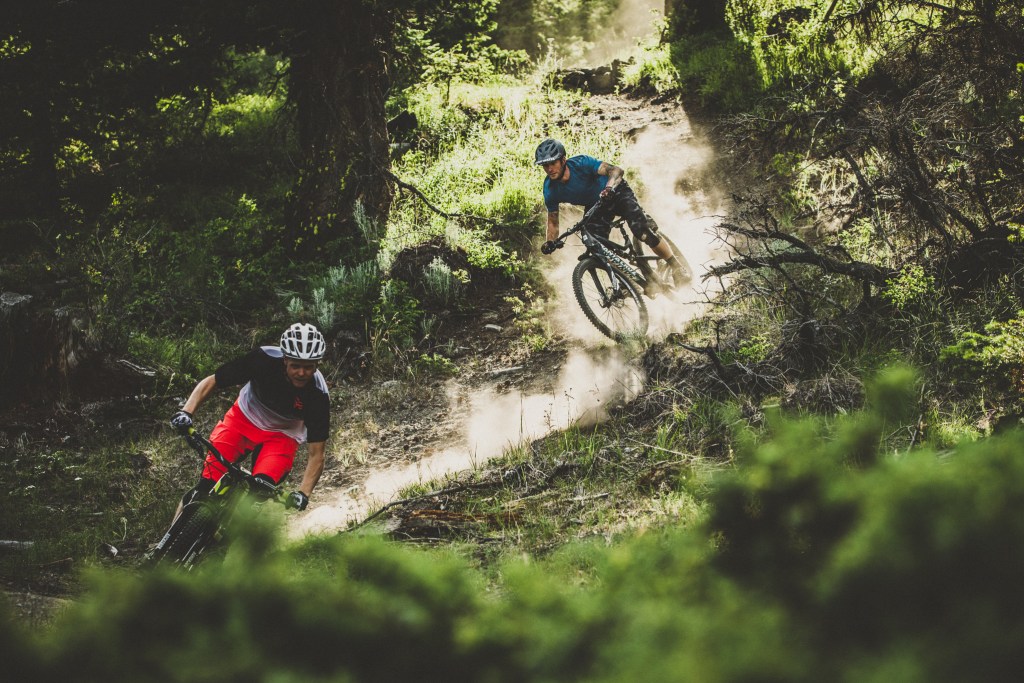 This time it’s just Kenny and me but on other occasions there’s been all number of riders present. And no matter the names or the numbers, it’s always the same — the chasing and jostling and rat-a-tat-tat of the dogfight.

Each lap of this dried-up waterslide of a trail has us hunting each other down in close formation. He dodges and I weave and we both battle to keep or take our position against the other. I watch him line up wide, so I dive inside, giving him a
glimpse of my front tire — but he’s kept better momentum and pulled away again. I hoot. He hears me. He knows it was close that time. He skips, I squash, he squashes, I pop. He drops a foot and his back wheel breaks loose, dirt squirting out from the rear. I set up wide and cut in early, fighting for traction, pushing hard into the tires. For a moment we’re side by side, but the closing corner only has room for one — and one of us needs to be the chicken. This time it’s me. He cackles, I laugh back.

I watch his lines — lines I wouldn’t have taken or imagined but I follow some of them now. I’m testing myself, breaking my routine, discovering a different path through close inspection of Kenny’s riding. Then, other times, I’ll watch his cues but choose a different approach — when he goes for the straightest, fastest line, I’ll go for the playful side-hit. Or when he cuts in hard and gets sideways, I might want to dig deep with my tire’s knobs and carve a clean line. Or when he puts in a pedal stroke, I might pull back and loft the front wheel into a manual. This is where the jazz takes over from the pure heavy-metal thunder,
complementing the track we are laying down. 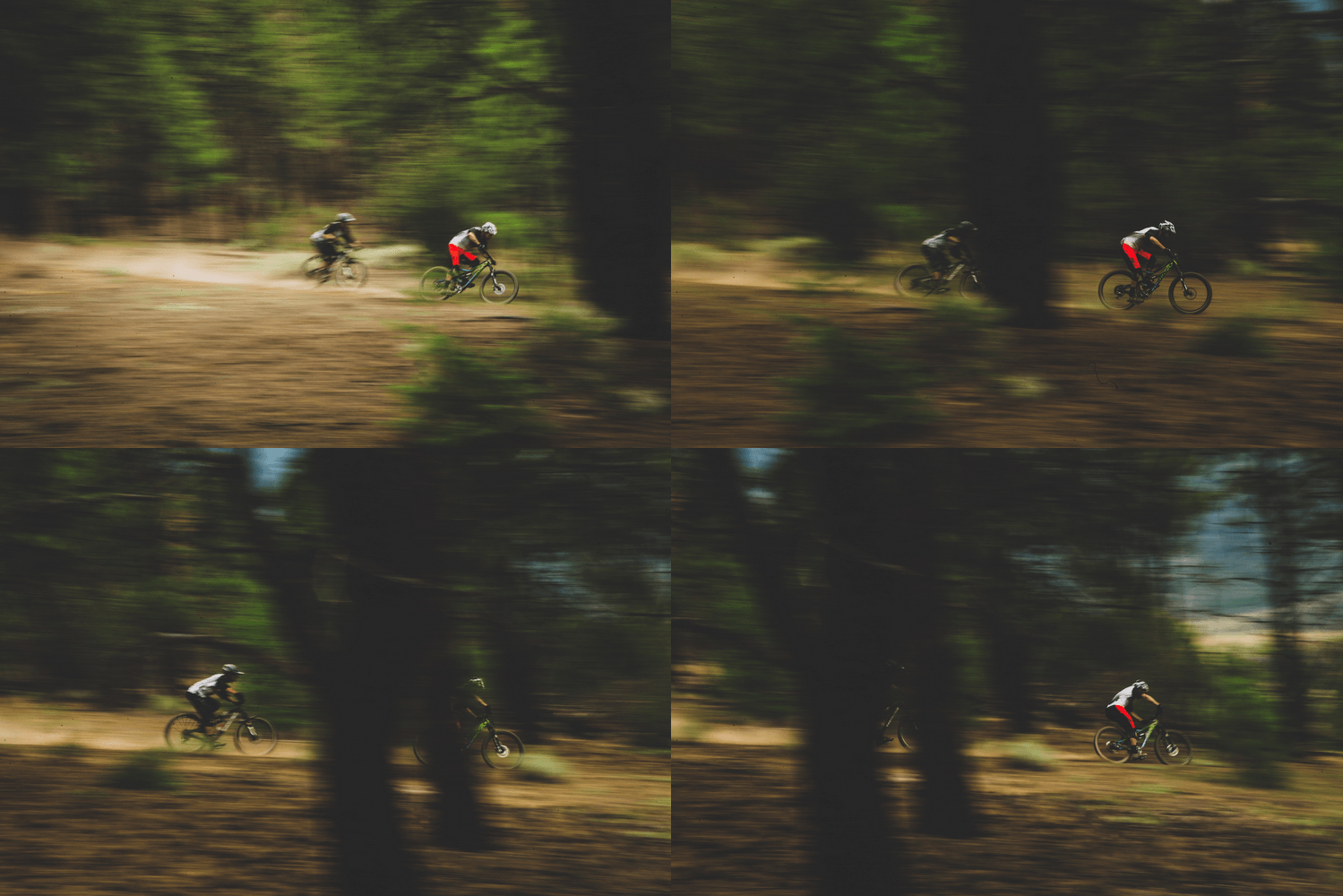 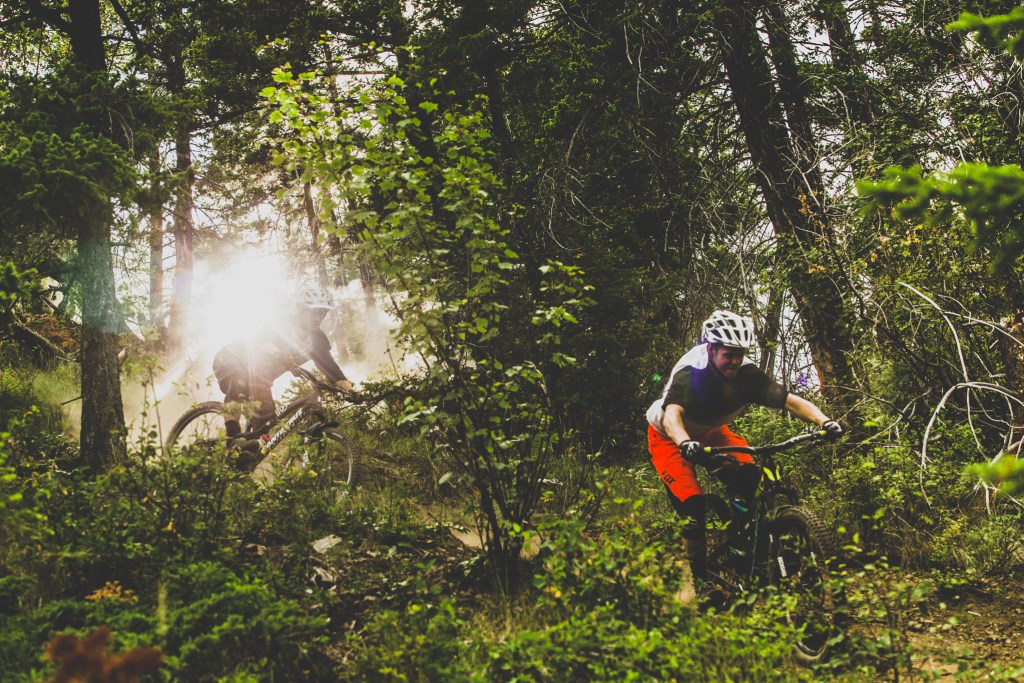 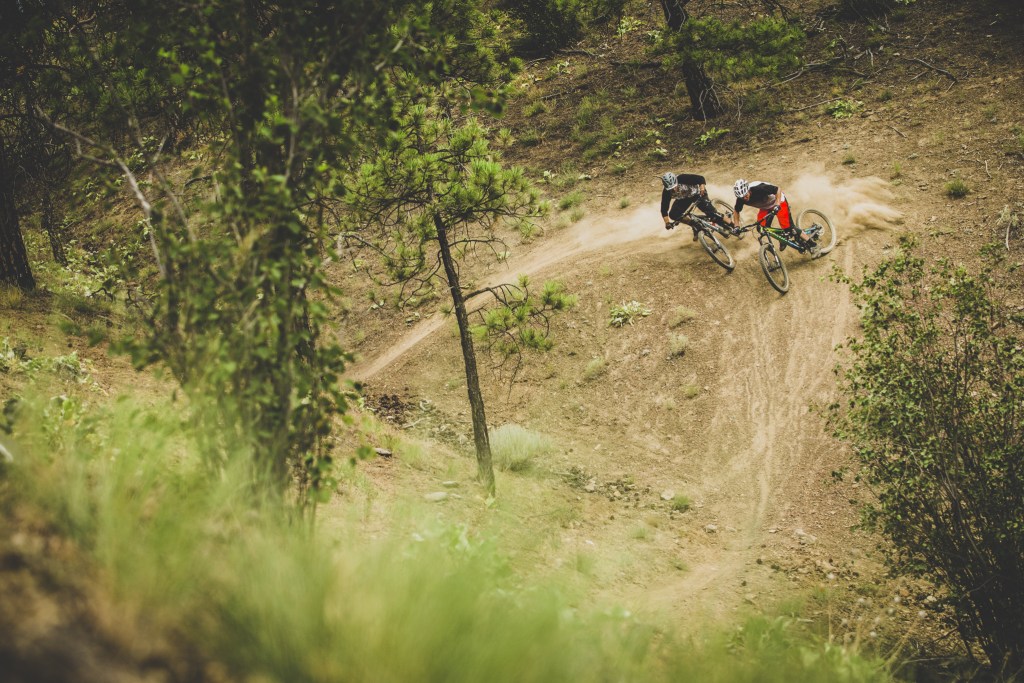 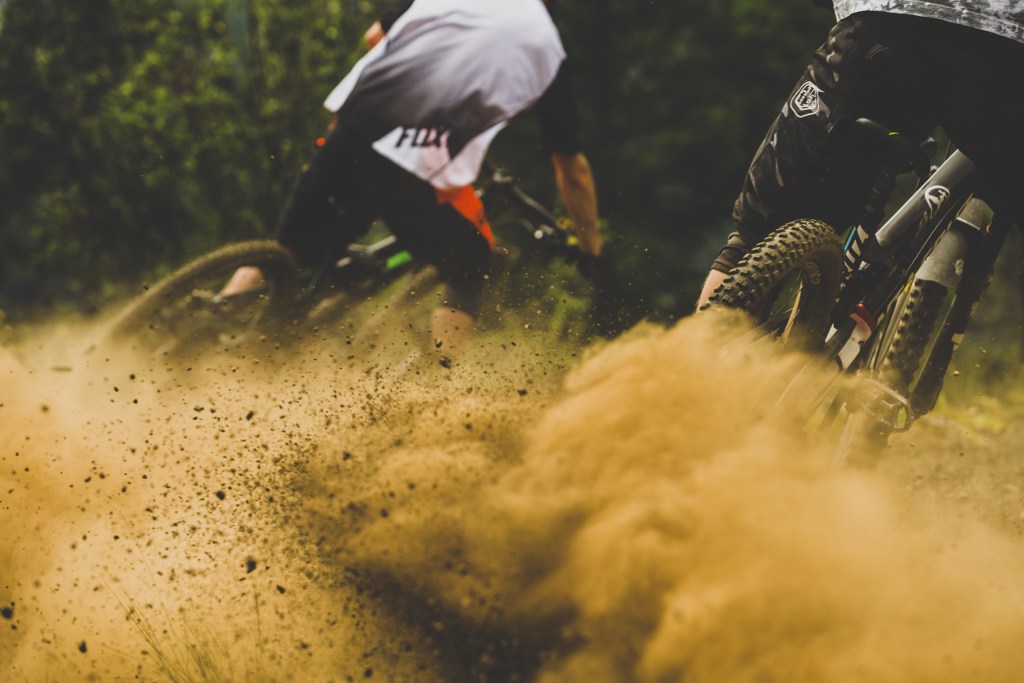 Della Creek is hard and fast and loose and soft, the earth tamped by tires and baked by the sun in places and untethered and dusty in others. The trajectory is firmly pointed downward most of the way, making speed easy
to come by. But I want even more, so I dare myself off the brakes and will myself into Kenny’s draft, pulled along
faster and out of the dust vortex that hides the trail if I get too far behind him. I’ve got to be in the sweet spot right behind him — just a meter or two between his rear tire and my front, which, at 40 clicks an hour, feels like inches. If I tap my brakes I’ll fall off his pace and the trail will become a whiteout, hidden by a dry fog of trail
vapor. But if I’m close enough to escape the rising smoke from his hurtling bike, the trail disappears anyway because all I can see is his spinning rear tire and his backside. Everything else is obscured. 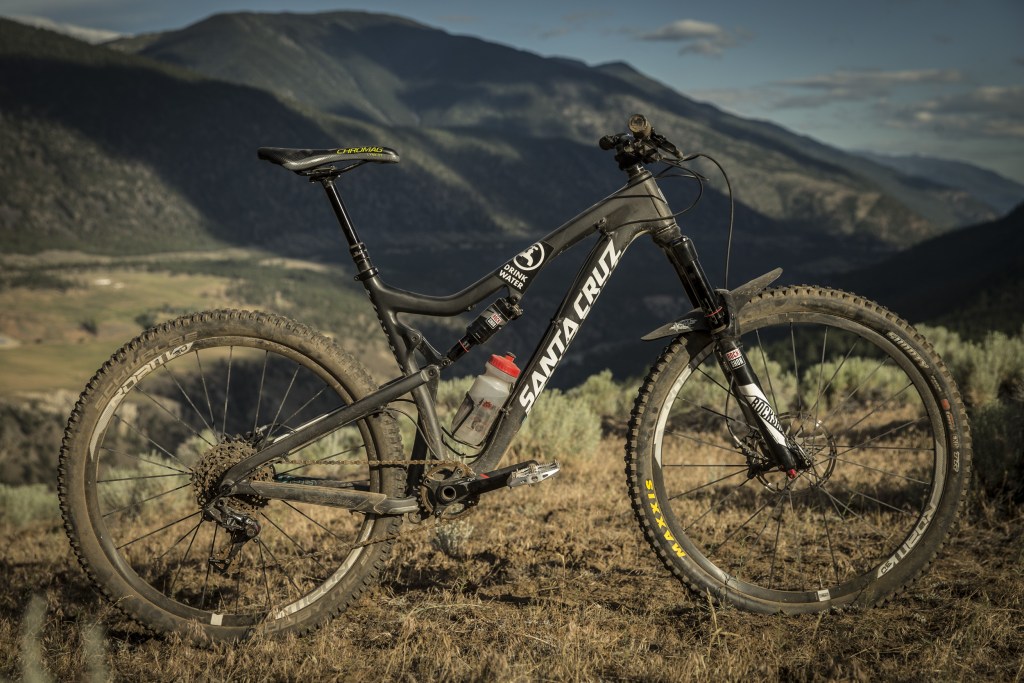 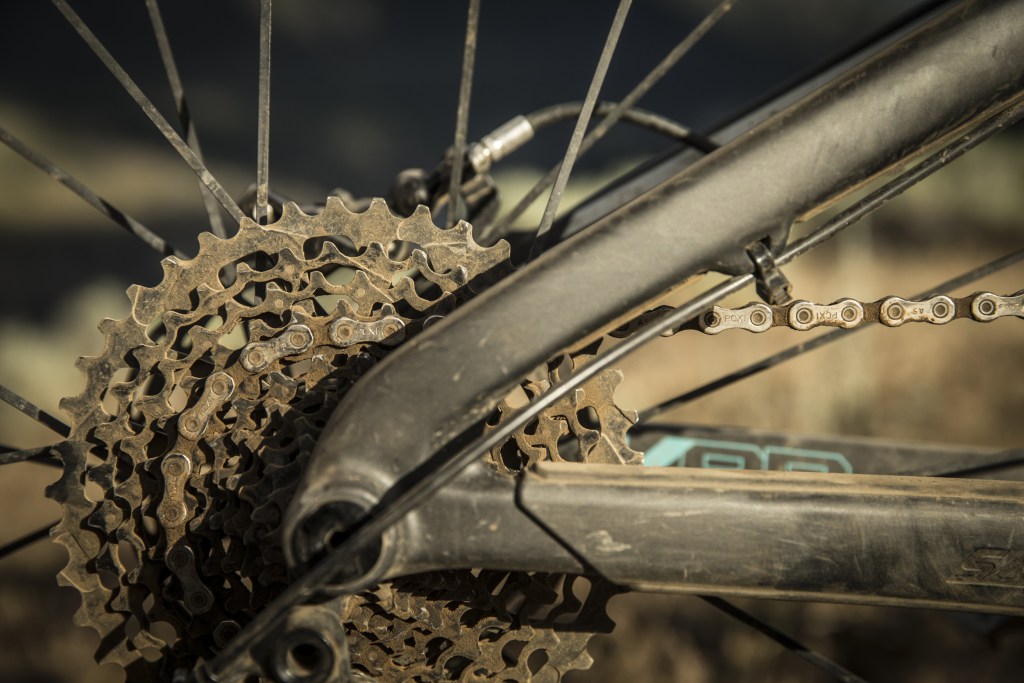 At this distance, I have to trust his reactions and his translation of the trail — that he’ll brake smoothly when necessary, that he won’t blow a turn and take me with him. So I study his body movements to get an idea of what’s ahead. I read Kenny to read the trail. Faith in the lead rider’s skill is essential. Following a slower rider
might seem safer but their movements and line choices might be erratic and therefore disastrous. But a better rider, like Kenny, hunts more speed, more thrills, which poses a different risk, because I have to be pressing at his pace. Otherwise, I’ll be trapped in a cloud of dirt, without the ability to read from the script he’s writing. So my choice is to be either right on his back wheel or 50 feet back. Fifty feet back is no fun. May as well ride alone. Sure, the high-fives and smiles at the bottom are the same but there hasn’t been the dogfight. 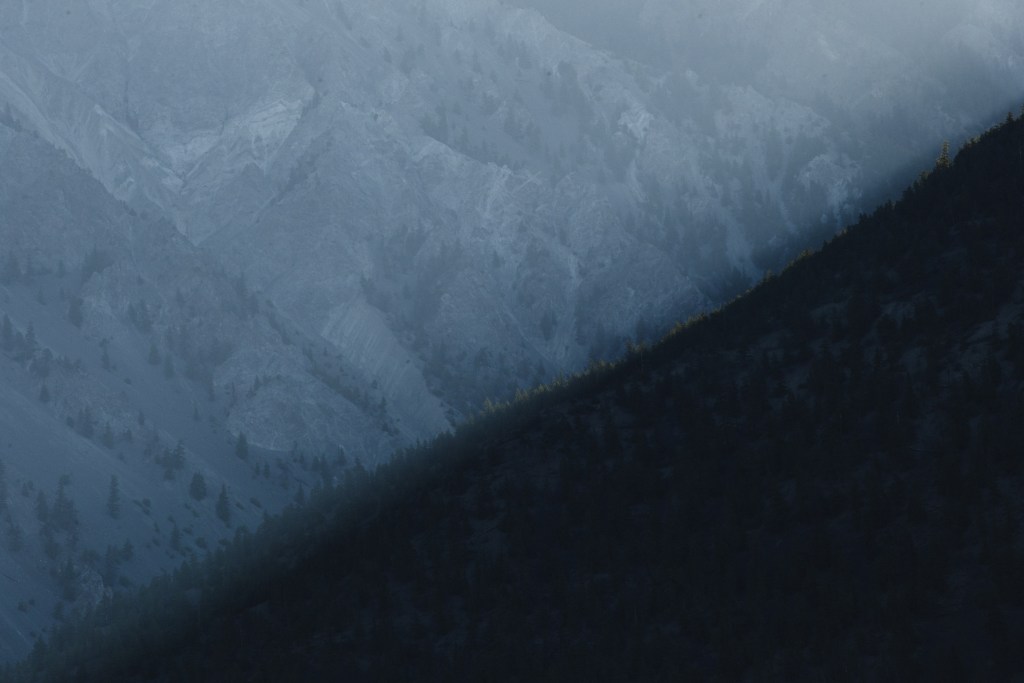 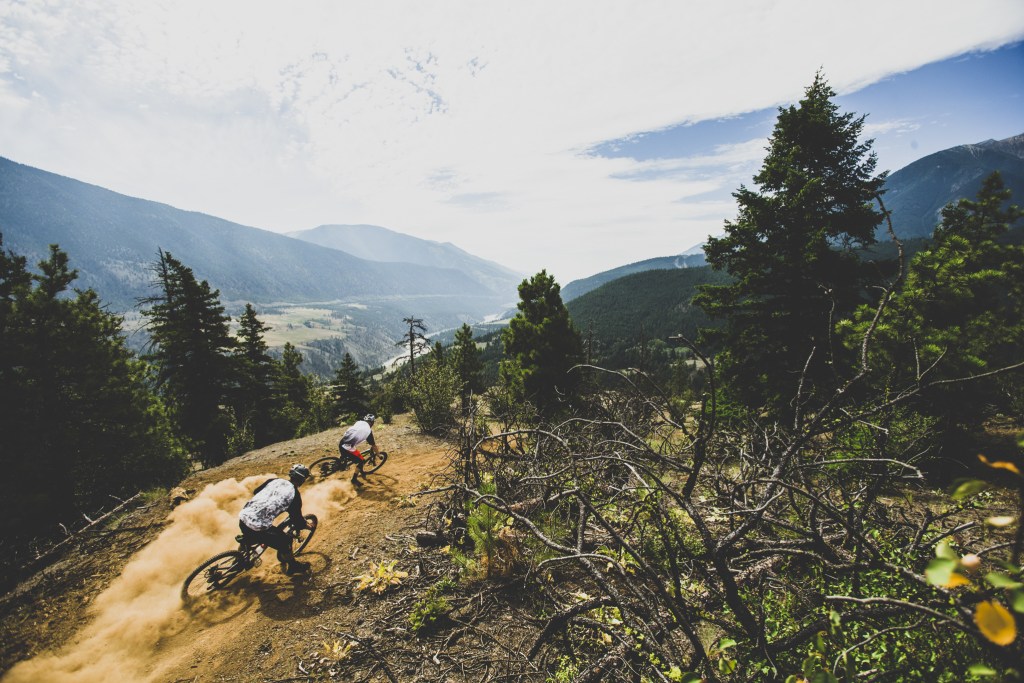 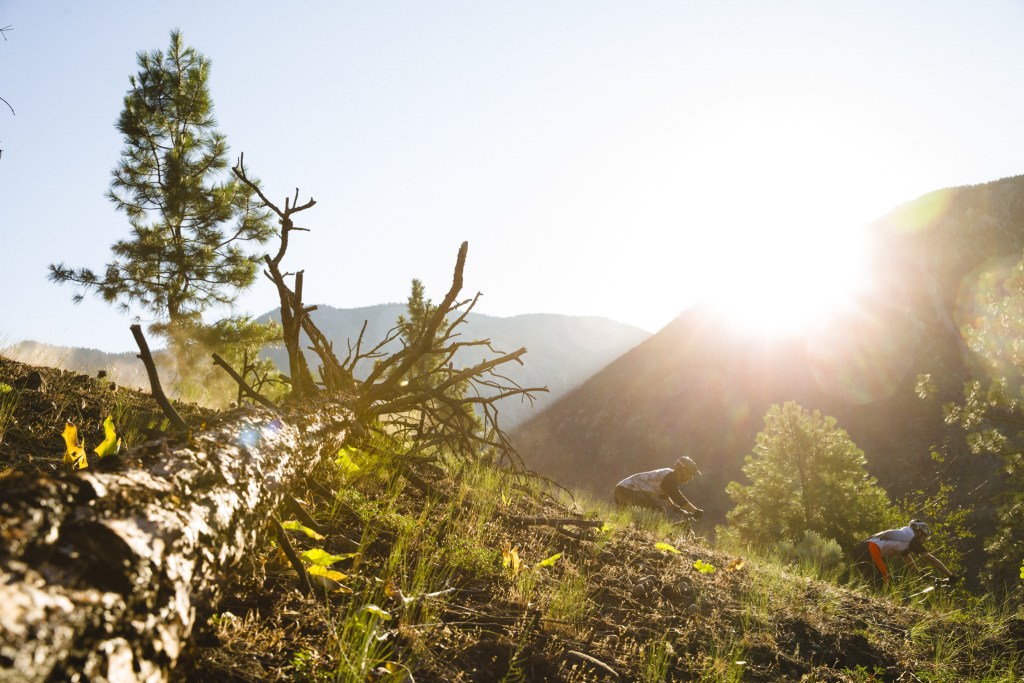 It is not a competitive thing. It’s not about who gets to the bottom fastest or first, it’s just the need to be in the company of speed. Bent forward, poised like a big cat ready to pounce, with a rigid grip on the handlebars as the bike comes alive, jumping and darting from apex to apex. Seeking out the line as we gain momentum, like fighter
pilots on the razor’s edge of eviscerating ourselves at even the whiff of an ill fated, split-second mistake. The downhill dogfight has to be done right — there is no room at all for error, especially when you’re pushing through the trail just inches from each other.

After you. No, after you. So begins each dogfight

That was totally awesome!