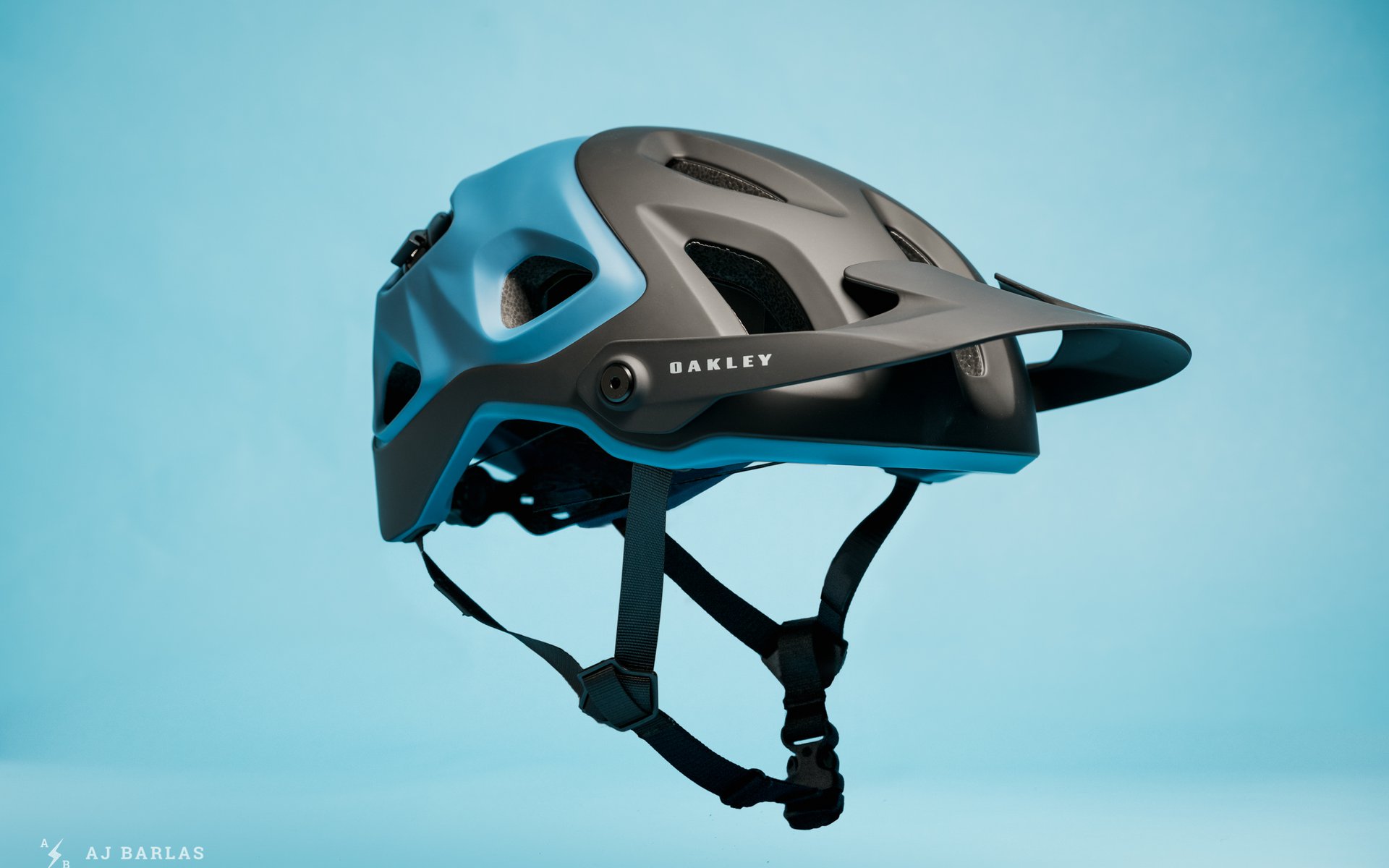 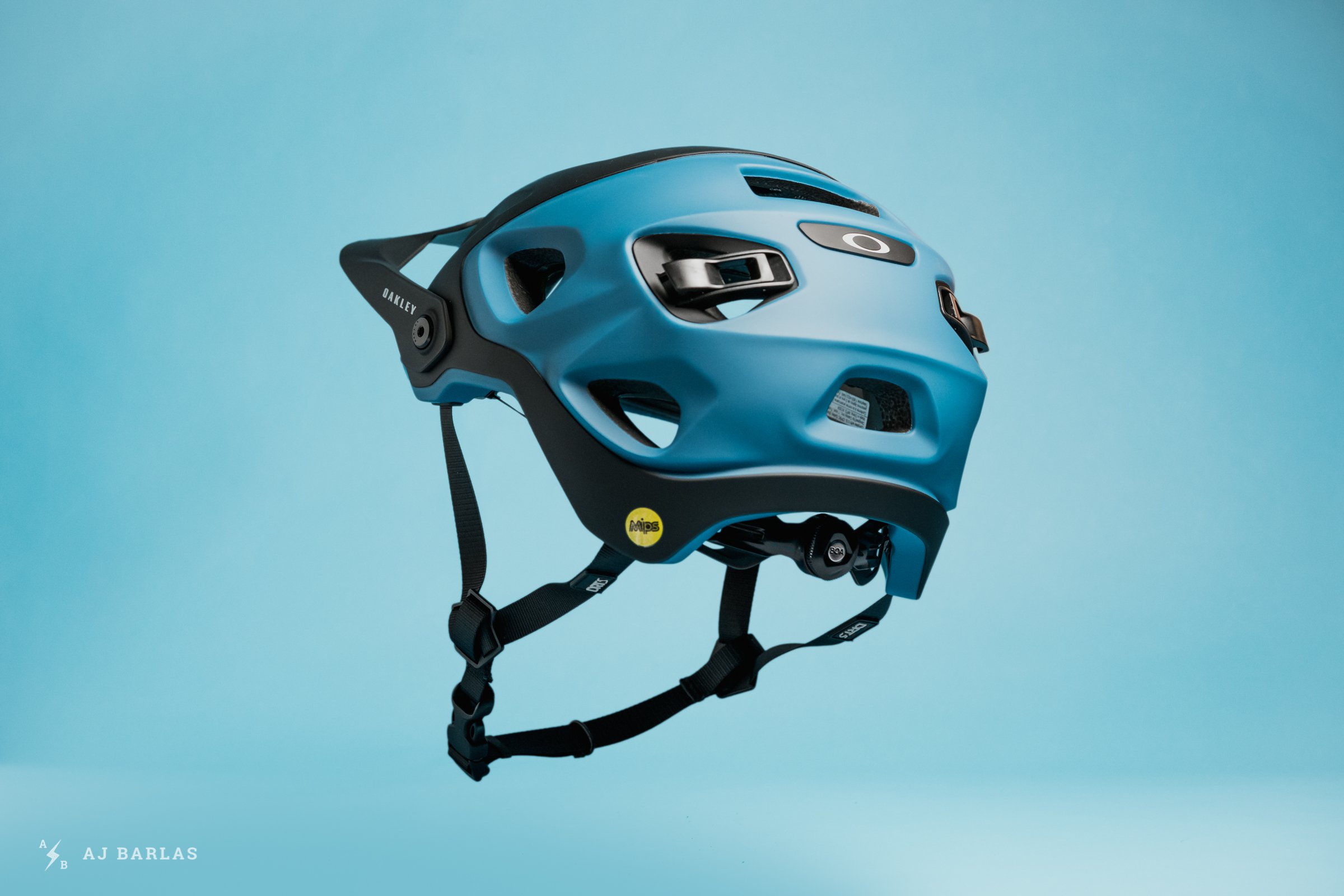 The rear of the DRT5 is where we see Oakley's design shine through.

The DRT5—pronounced dirt five—is developed for general trail riding and it features what you'd expect. It offers full coverage, an adjustable visor, adjustable snap basket in the rear, and MIPS. There are also some unique elements. Across the brow is a ribbed, silicone sweat guard in place of a typical foam pad, sizing can be adjusted with a BOA 360 and there’s a specially designed location at the rear to store eyewear.

The DRT5's weight was immediately apparent. At 444 grams for the size medium, it’s on the pudgy side. Coming from my lightest helmet—a non-MIPS Specialized Ambush that weighs 290g—the weight was noticeable on my head too. While puzzling what was behind the extra weight I realized I'd forgotten to consider MIPS. When compared to the MIPS-equipped TLD A1, the Oakley weighs only 27g more. But I also noticed that the rim of the DRT5 appeared thicker than others I have access to. After measuring it against the Ambush, a MIPS TLD A1, and a Kali Maya, the DRT5 proved this to be true. 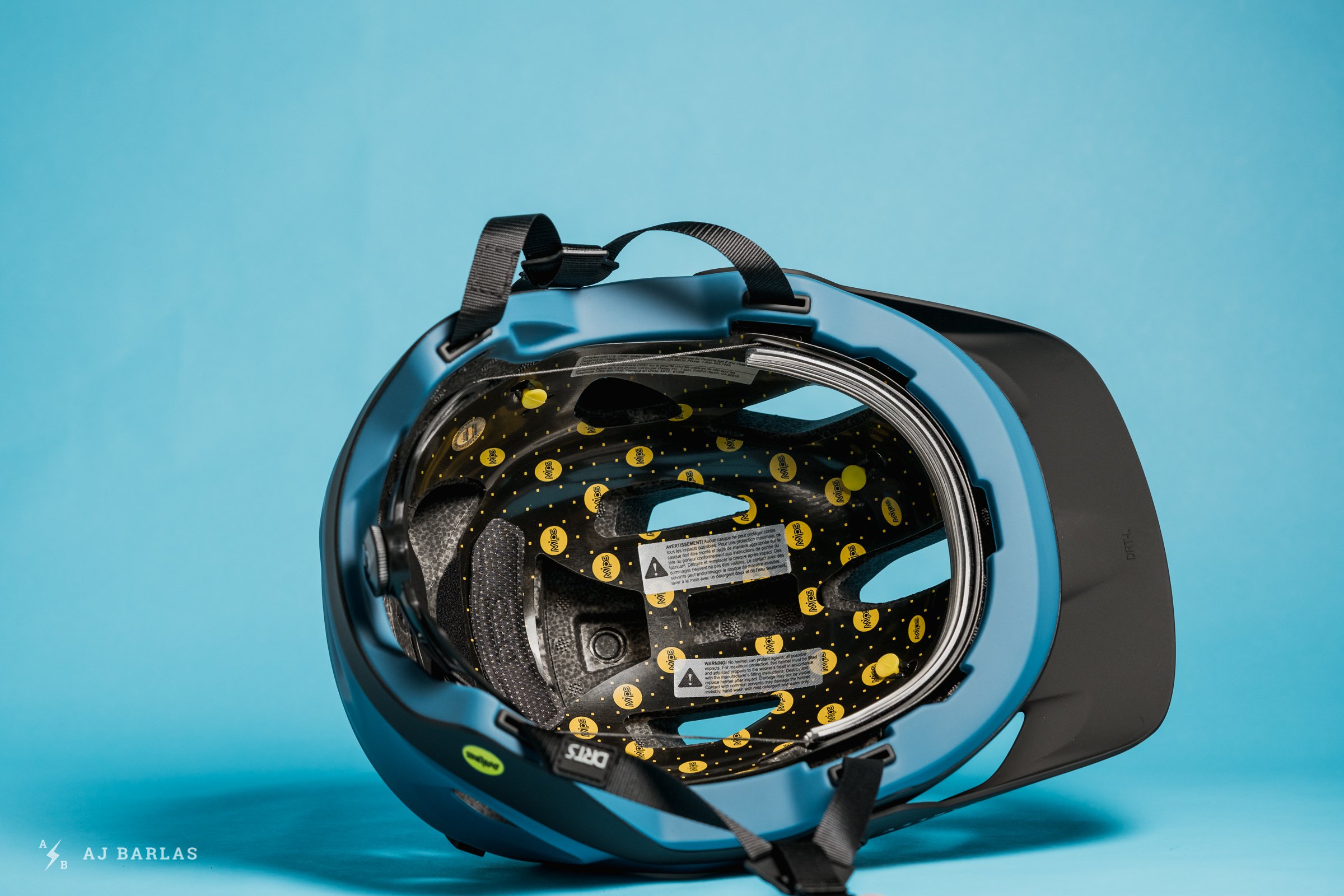 I almost forgot the weight that MIPS adds to a helmet. The DRT5 only weighs 27 grams more than the TLD A1 and it offers more foam around the rim. 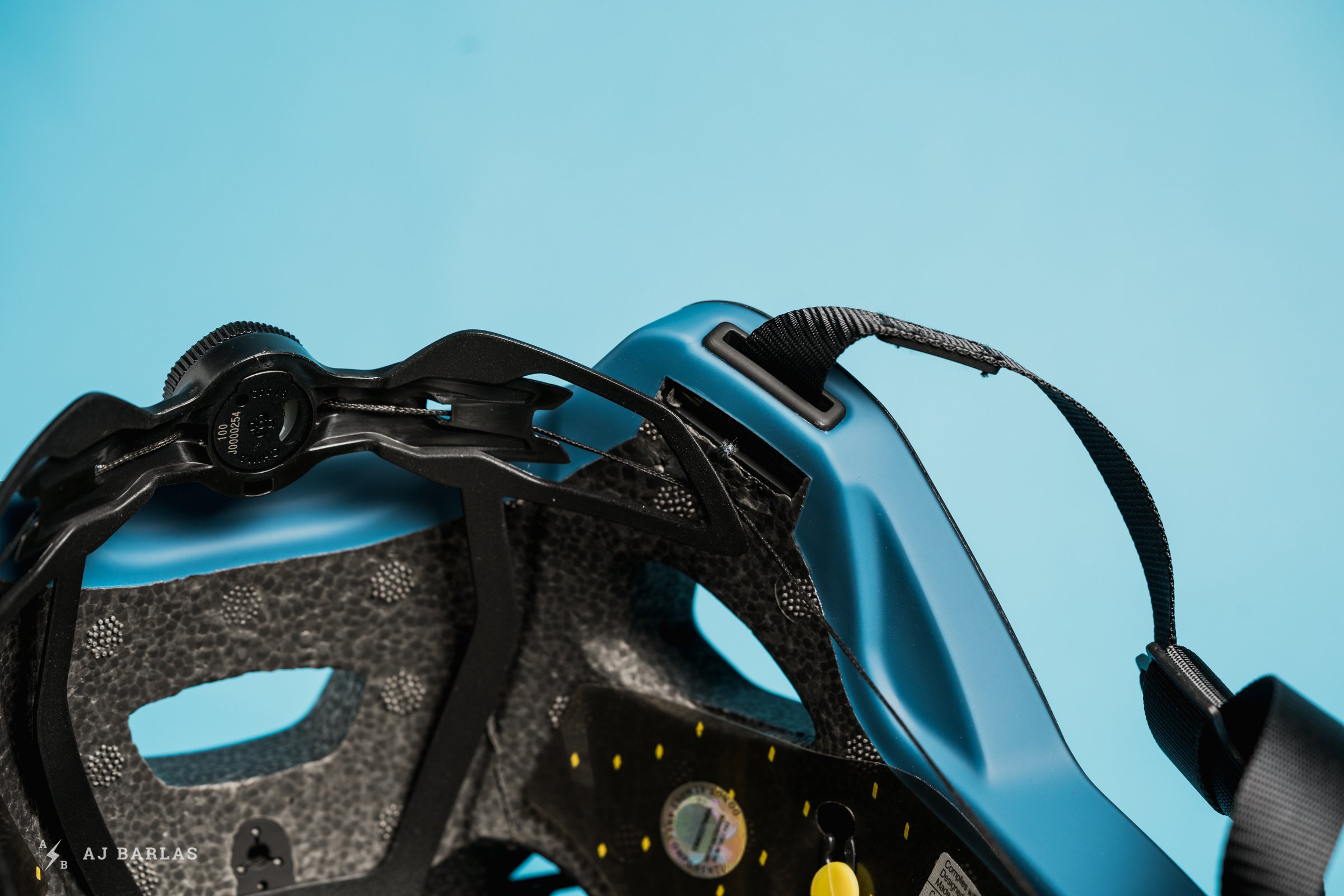 The finish details are excellent. 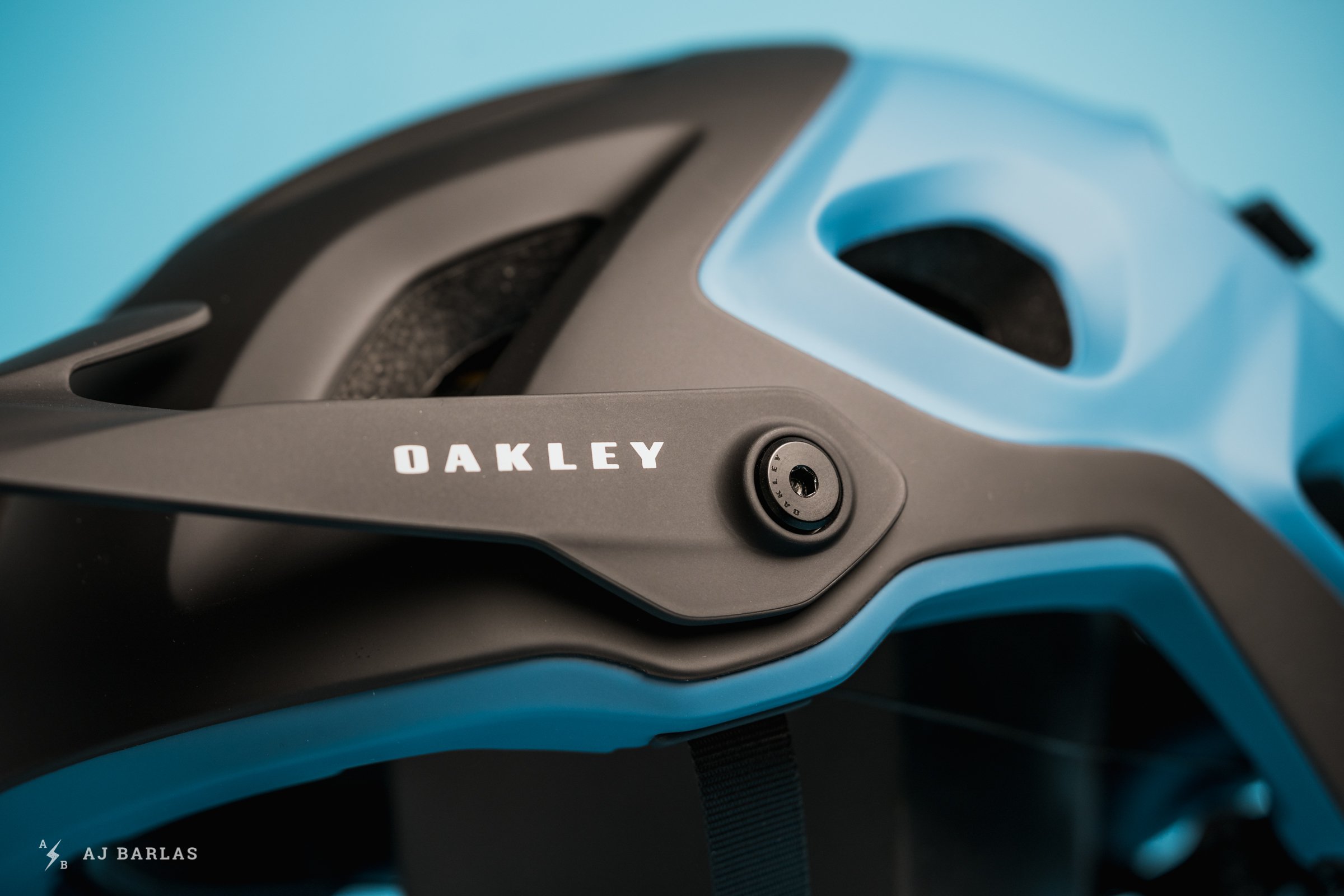 The visor is secured with alloy hardware and features detents to firmly lock it in each position. 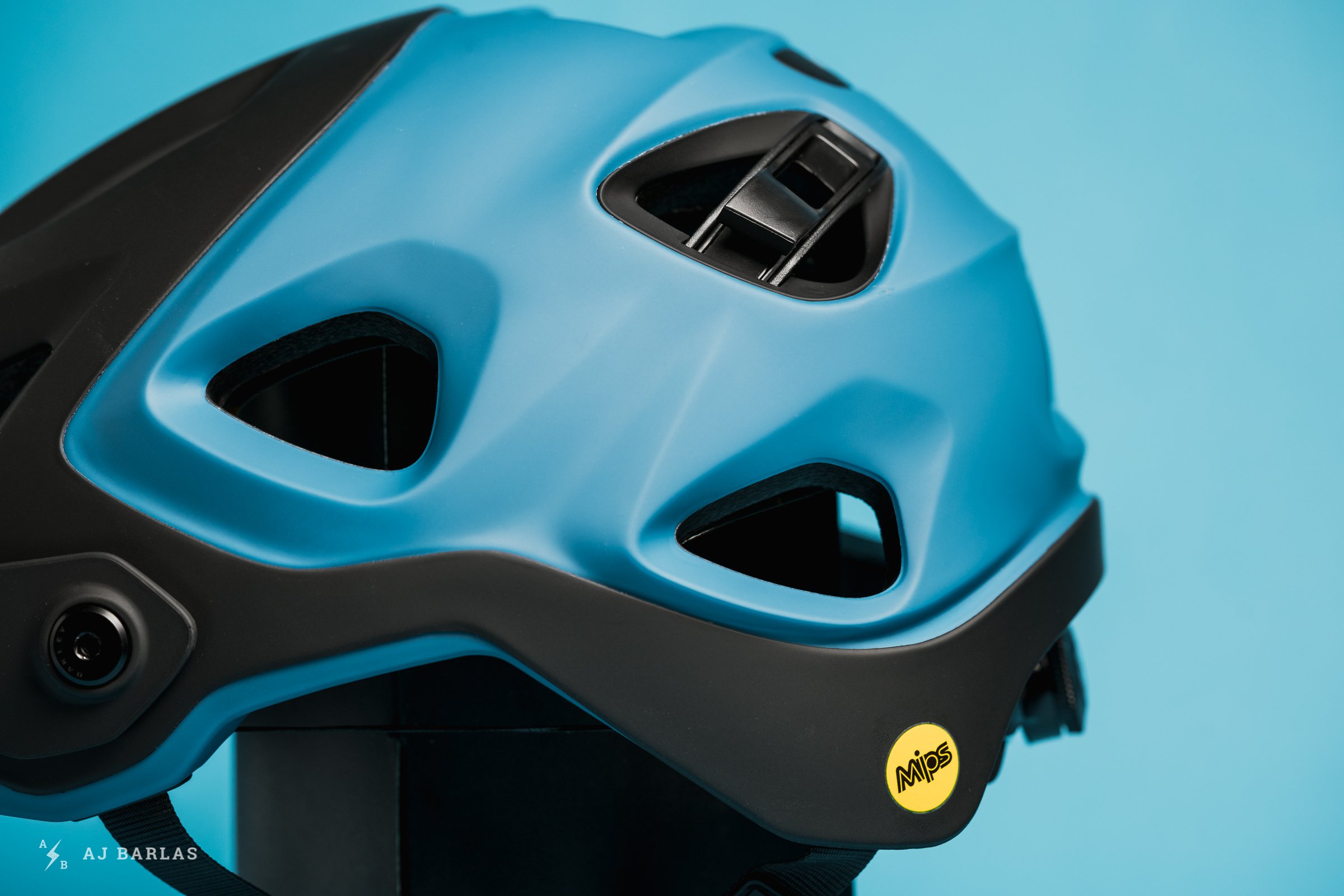 While the front portion of the helmet is simpler looking, the rear panel is where the party gets started with some more unique contours.

The DRT5 features a fairly consistent rim thickness around the helmet. Both the DRT5 and TLD A1 remain the most consistent in rim width across the front of the helmet. The Ambush has a point in the front centre of the rim that's ~2mm thicker, but it quickly thins out to 10mm thinner. At the sides—above the ear—the DRT5 measured ~5mm thicker than the Ambush, TLD A1, and the Kali Maya. This is significant because based on available research, the rim is most often the point of impact in an accident. And from my own experience, I most often hit along the rim between the front centre and ear area. 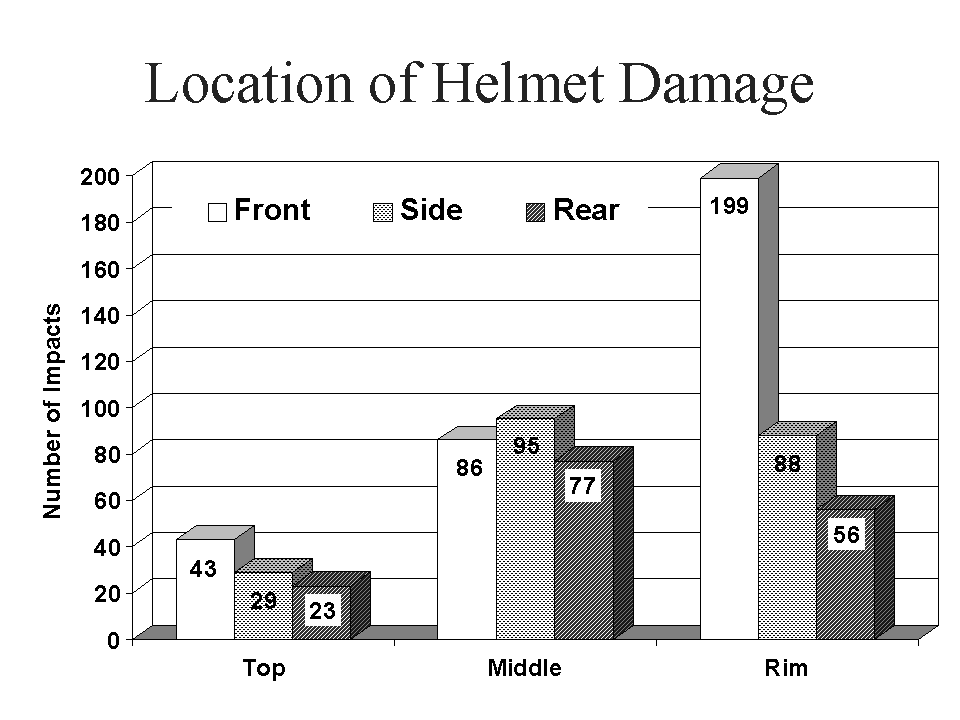 Research shows the front rim, or edge, of the helmet takes the brunt of impacts. The sides also show lots of impacts.

While I’m chalking most of the 27 grams up to safety, the DRT5 also features integrated mechanical clips for secure eyewear storage. This adds 22 grams and as someone who always rides with glasses I’ve found it most useful, so I'll take it.

Oakley have also done away with the typical foam pad across the brow in favour of a ribbed silicone strip. For riders who prefer foam, Oakley include an X-Static pad* to swap with the silicone but after using the silicone strip, I’m not sure why you would. Lastly, Oakley carried over their knowledge on airflow and ventilation from their road helmets to the DRT5 mountain bike lid. And as I discovered, it's a welcome surprise.

* X-Static is claimed to be an anti-microbial and quick-drying foam pad. 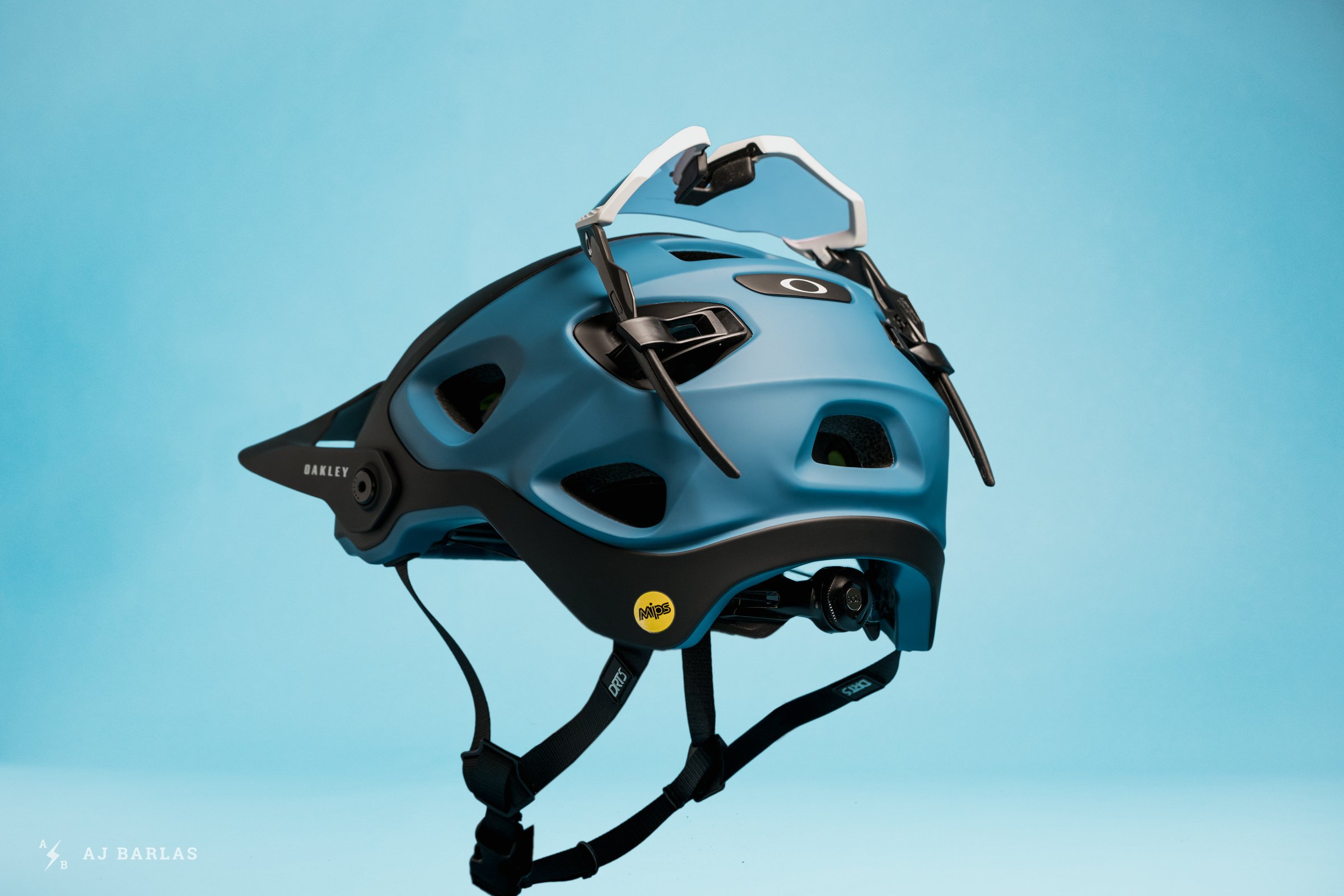 Riding eyewear held in place by the mechanical clips at the rear of the helmet.. 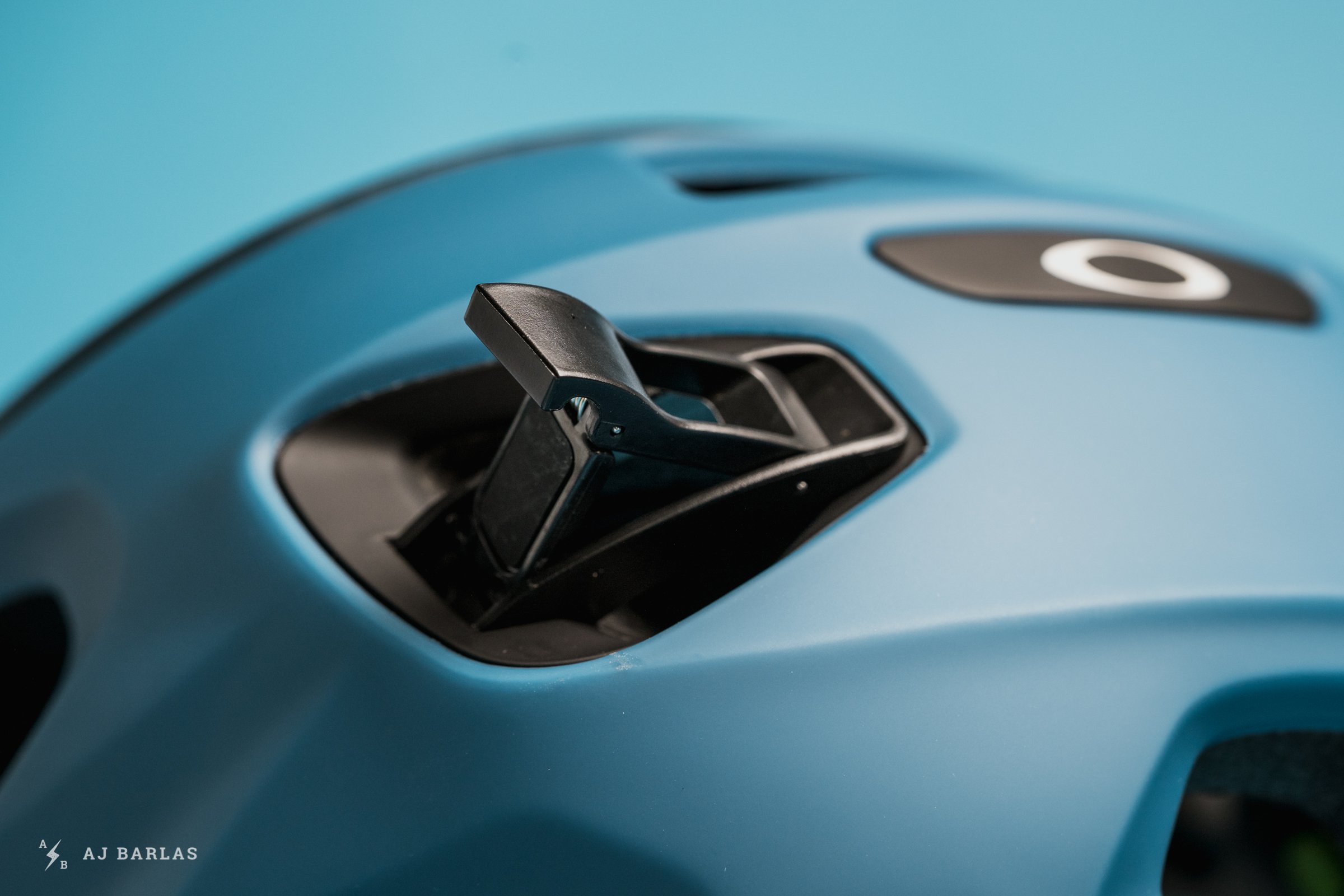 The clips open and lightly lock in place, ready for the arms of a pair of glasses. These snap down and gently lock the arms, and glasses, in place.

Once perfectly adjusted, slipping the DRT5 on provides an incredible fit and feel. It provides a small amount of resistance before sucking into place on my head and remained securely in place with no slop or pressure points. The Specialized Ambush and TLD A1, which fit better than anything I'd worn before this, fit loosely in comparison to the DRT5. The Oakley is better.

The BOA 360 retention system and the ribbed silicone strip seem to be responsible for the excellent fit. The BOA 360 provides equal tension around the entire head, while most retention systems generally focus on the rear and sides. The Specialized Ambush uses a similar concept but it’s not as good. And while Oakley stresses the sweat management as the main benefit of the ribbed silicone strip, it also adds to the secure feel of the helmet. 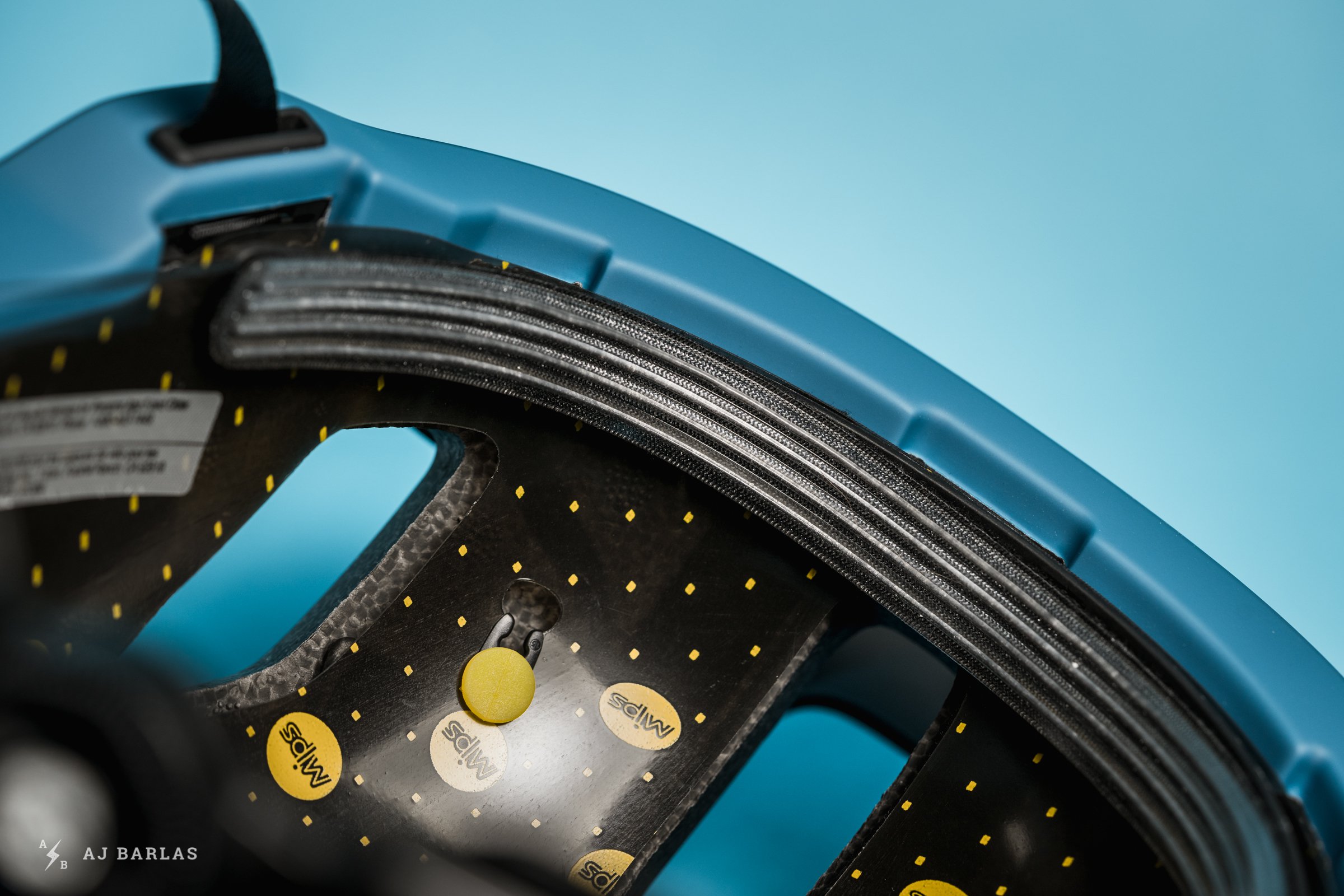 The ribbed silicone strip in place of the regular foam pad. It's supposed to provide better sweat management and in my experience it does. But it also assists with the great, secure fit of the DRT5. The strip is easily removed for easy cleaning too. 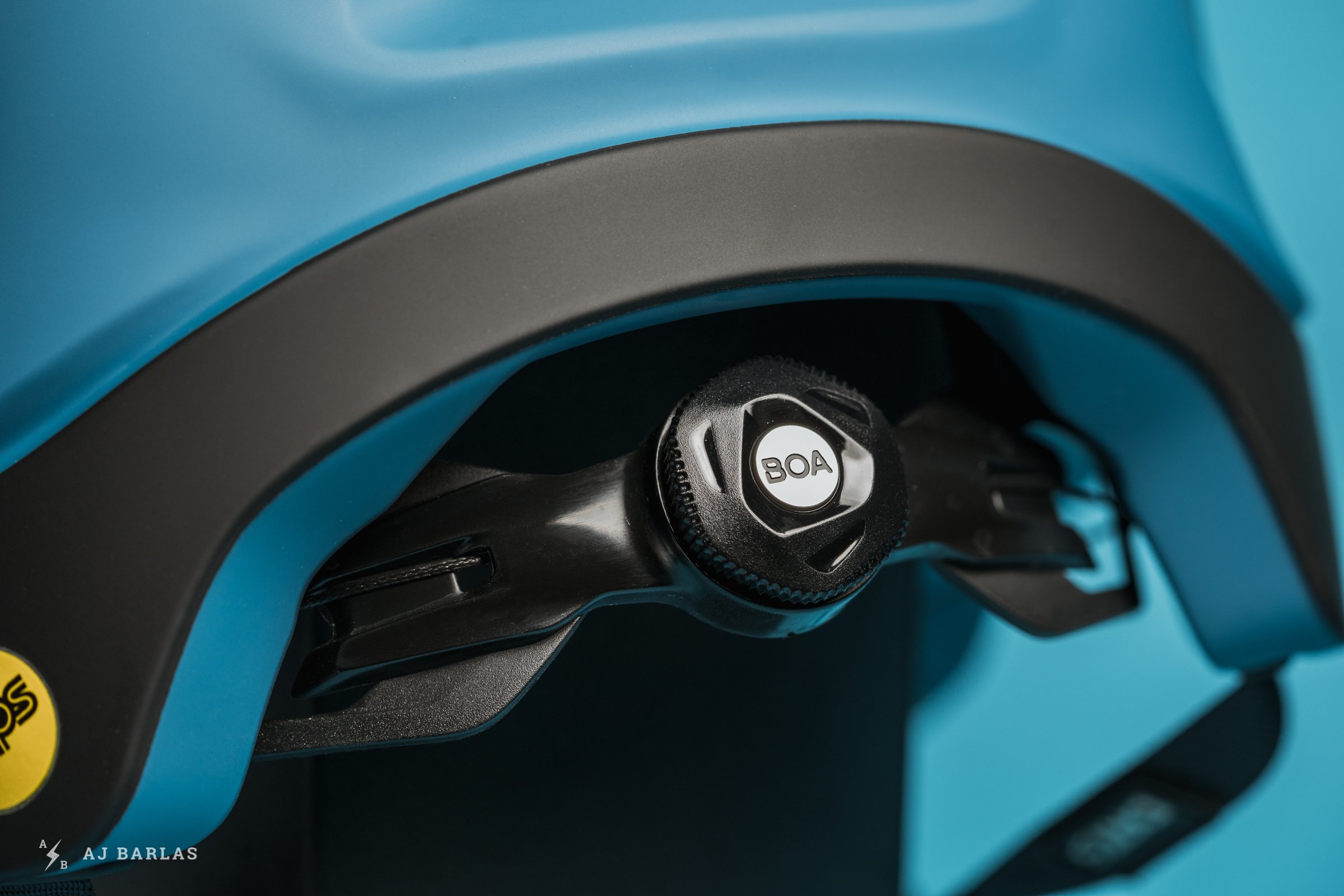 The BOA 360 System provides easy retention adjustability that cinches down evenly around the head. 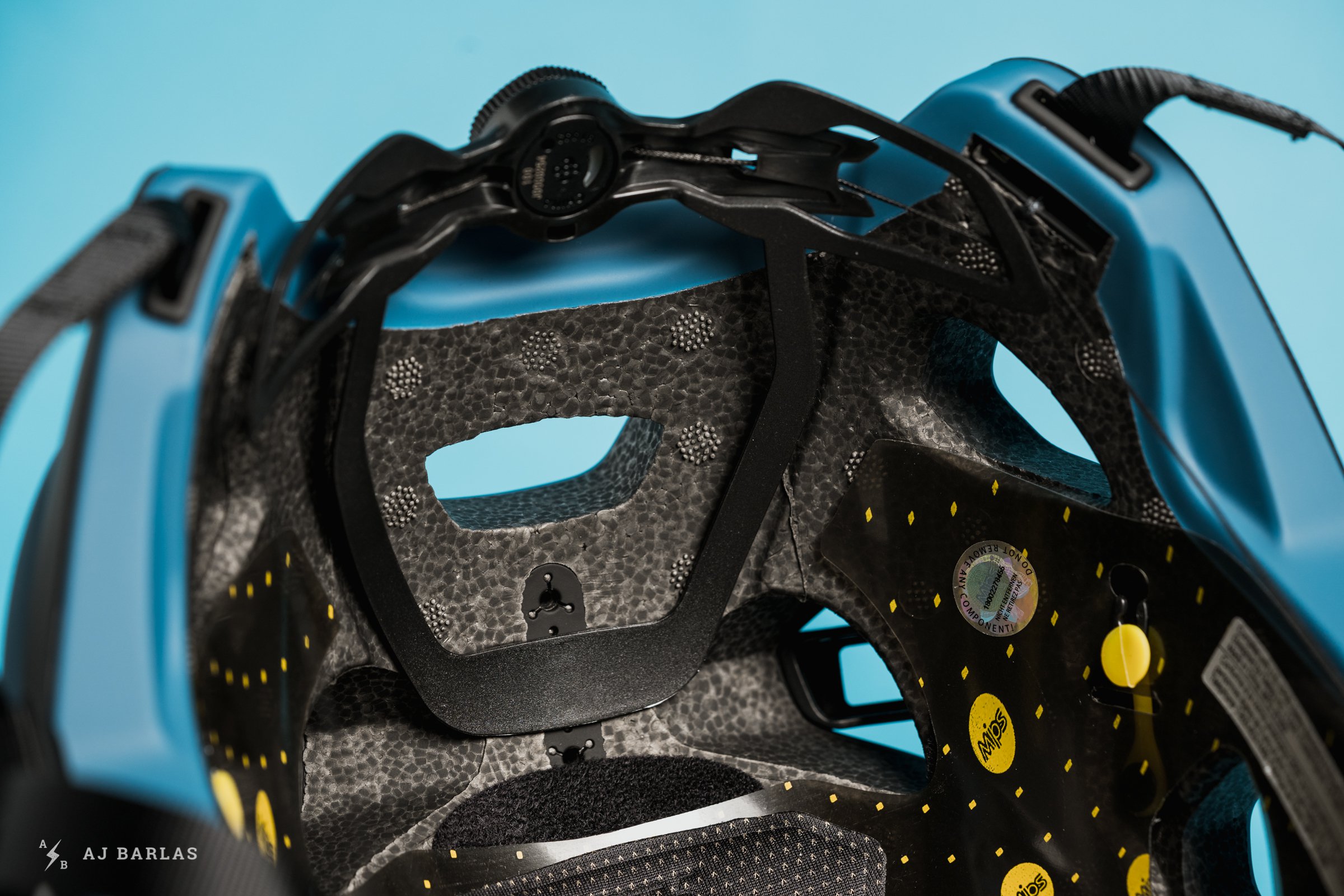 The rear snap basket can be adjusted up or down to achieve the best support at the rear of the helmet. 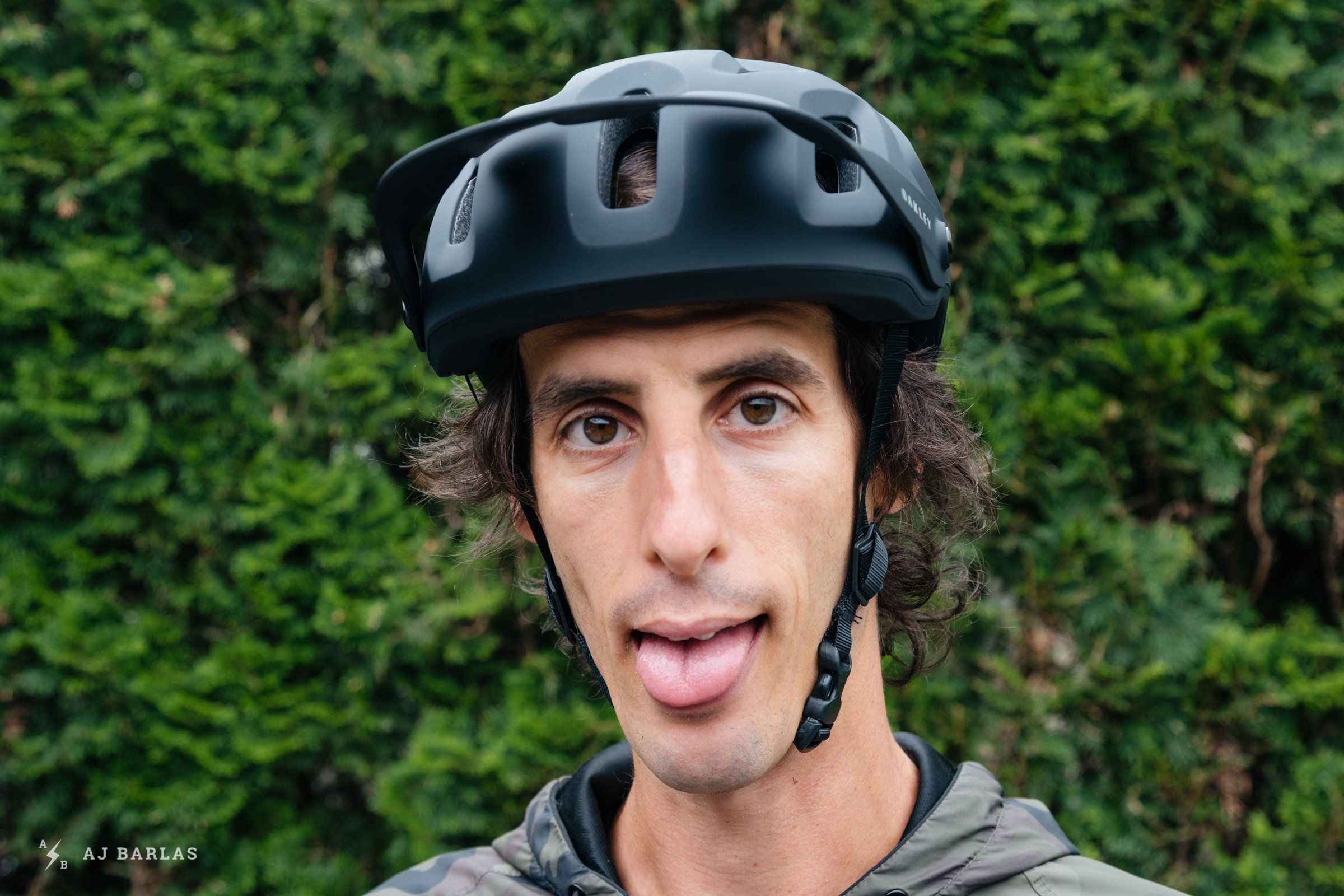 The weather lately has enabled me to test the sweat management claims for the silicone strip. I don’t sweat heaps but when it's in the mid-30’s celsius my sweat can overwhelm a foam pad and drip down my face. With the DRT5 I was surprised when drips of sweat came from either side of my forehead on one particularly hot ride rather than down the middle. At the time I hadn’t researched the intended purpose of the strip and once I did I was all the more impressed. There’s been no salty eye-sting during the hottest of rides with the DRT5.

Of course Oakley the eyewear maker has a special spot for your spectacles on the DRT5. I’ve always stuck the arms of my glasses through the rear helmet vents, pushing them in until the lens sits flush with the rear of the helmet. It worked well with the Specialized Ambush and most of the time with the TLD A1. On occasion, the latter caused pressure points from the ends of the arms inside the helmet. And while most glasses remained there they did come loose during undulating sections of a climb. I’ve also lost a pair of rather pricey glasses after a branch hooked and plucked them from their place. 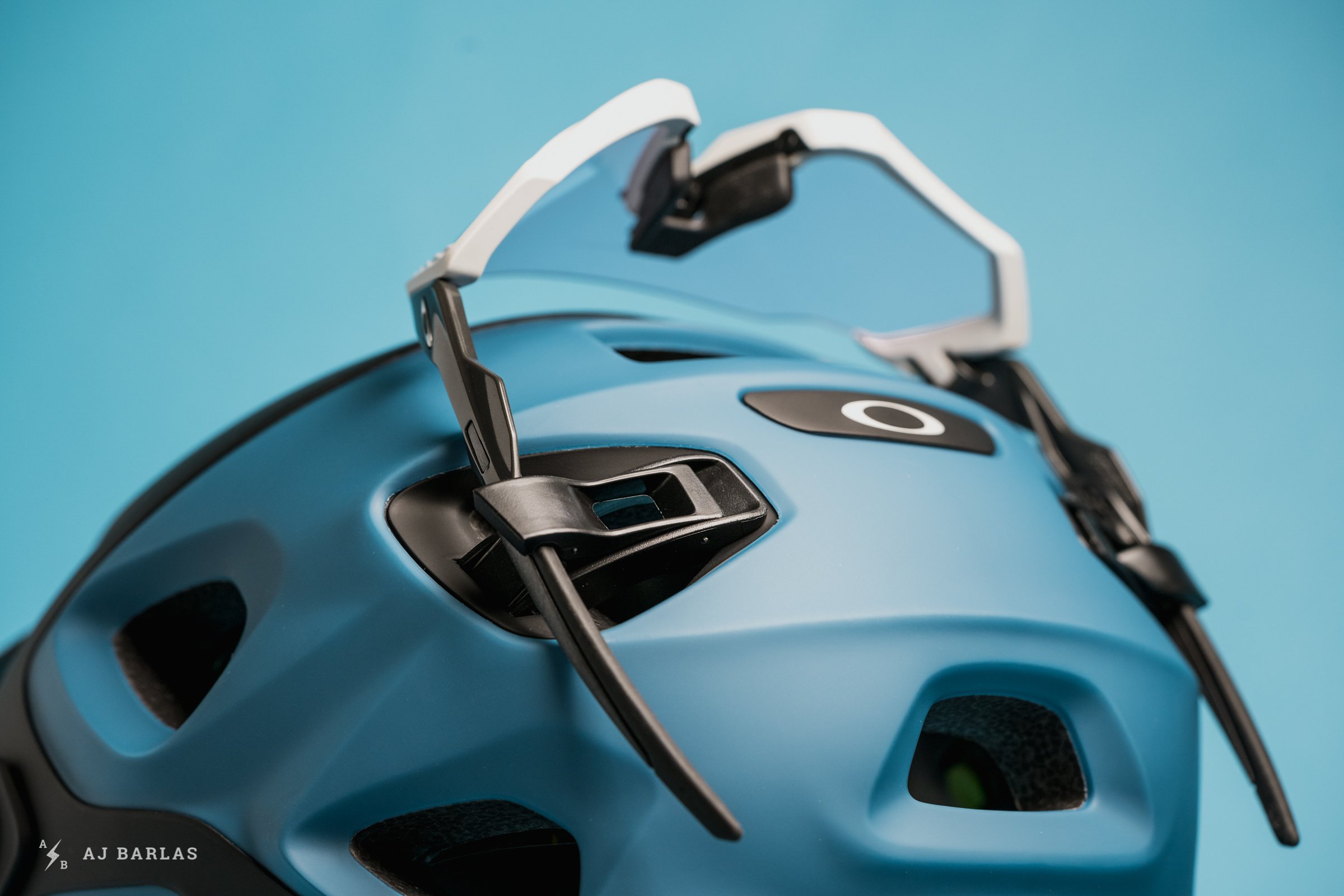 A closer look at the eyewear landing zone. To some riders this will be useless but for others like myself, it's very functional.

Without glasses the clips are small and go unnoticed but they can be completely removed if preferred.

With the DRT5, glasses are easily mounted to the back of the helmet and popping the small locks on the attachments secures the arms in place. This also positions the lenses forward, where sticking them through the rear vents left them open to muck off my rear wheel. If you ride with glasses you'll appreciate the system. For riders that prefer goggles, the visor has 60 degrees of adjustment, providing heaps of room to place them at the front above your forehead when not in use.

The biggest surprise with the DRT5 is the airflow. There doesn’t appear to be much ventilation and despite the large vents I’d be lying to say I wasn’t concerned about how hot the helmet would be. While in la-la land during my initial ride, I was brought back to reality by a cool sensation across my head. It turns out the enginerds at Oakley did a great job with the airflow because it works better than the other helmets I've mentioned. The Ambush, which looks to have heaps more ventilation, does a better job of allowing heat to escape at a standstill, but once moving—even slowly—it’s clear the DRT5 vents better. 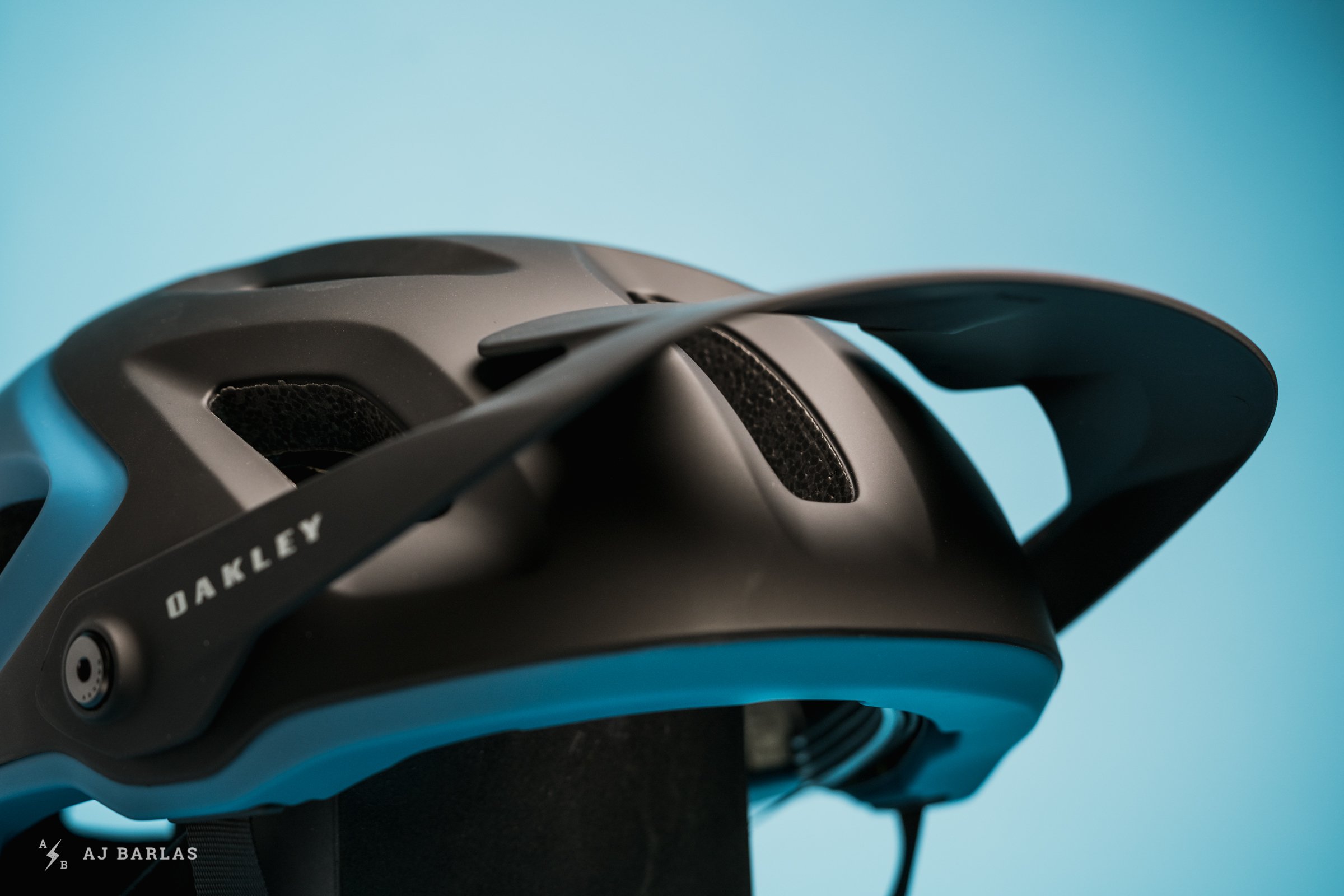 At first glance, there doesn't appear to be a lot of ventilation but what there is has been engineered really well. 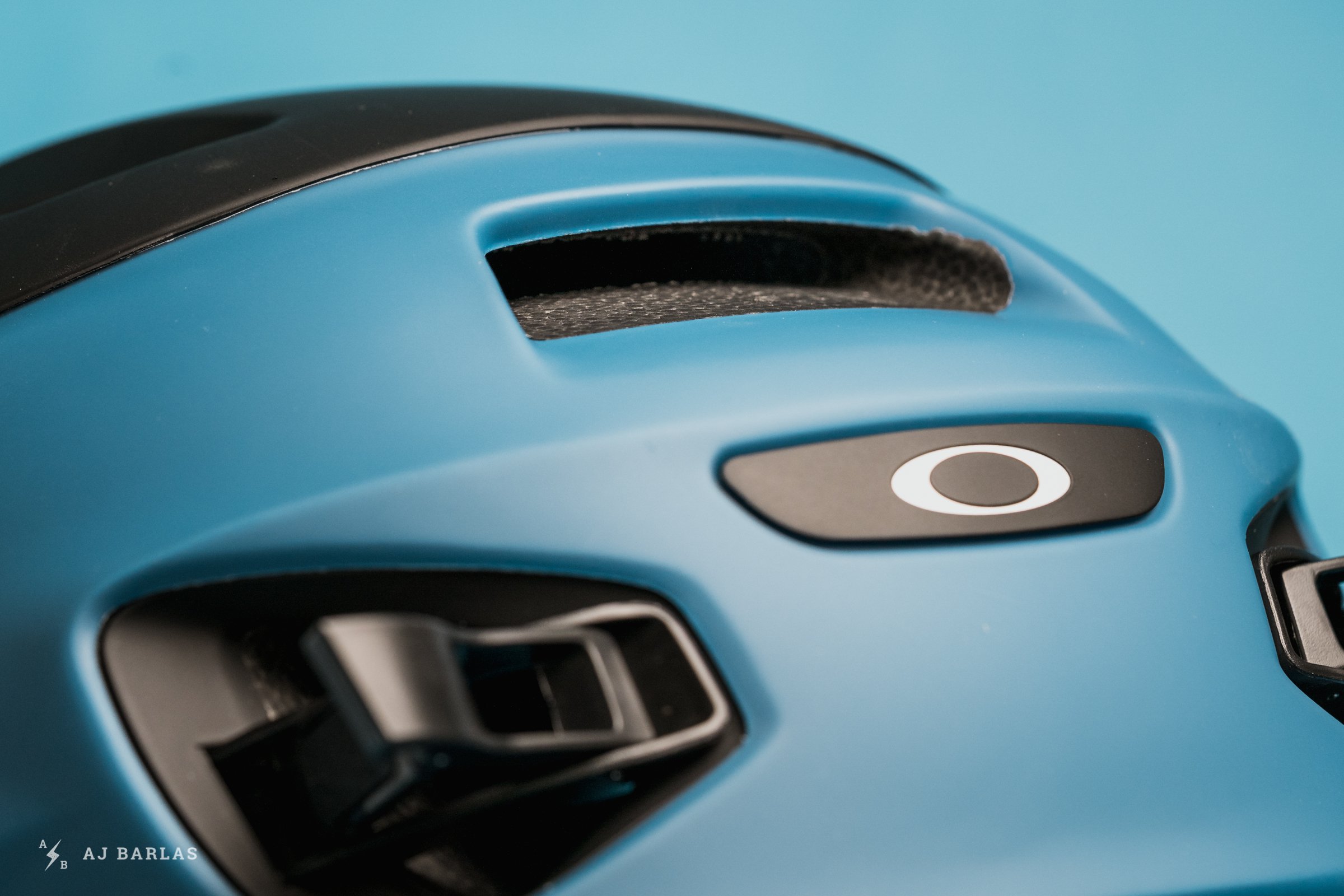 The rear exhaust. Air noticeably funnels through the top of the helmet and out of this point. 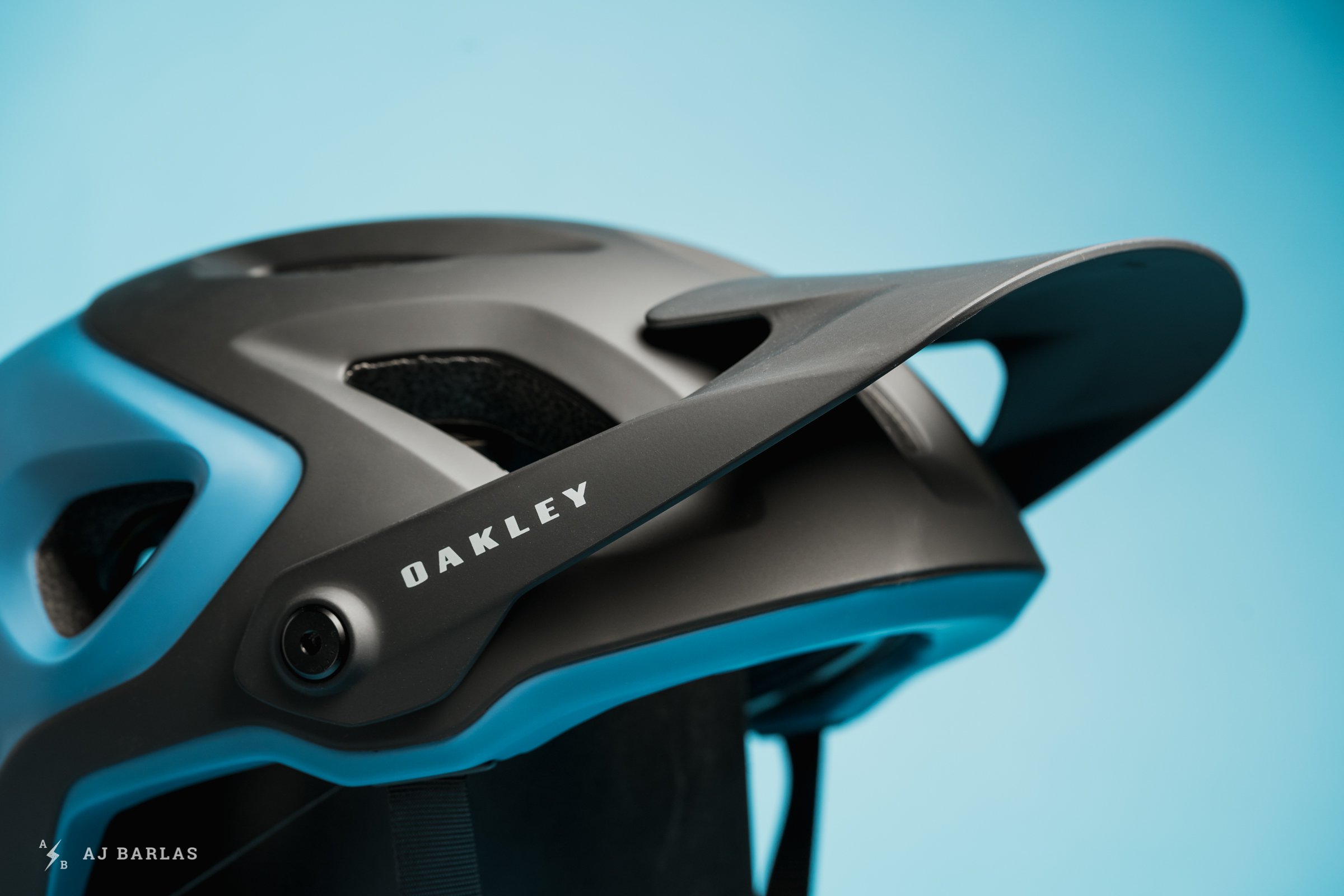 The visor offers 60 degrees of adjustability via detent positions. It sits just out of the field of view at my preferred riding height. 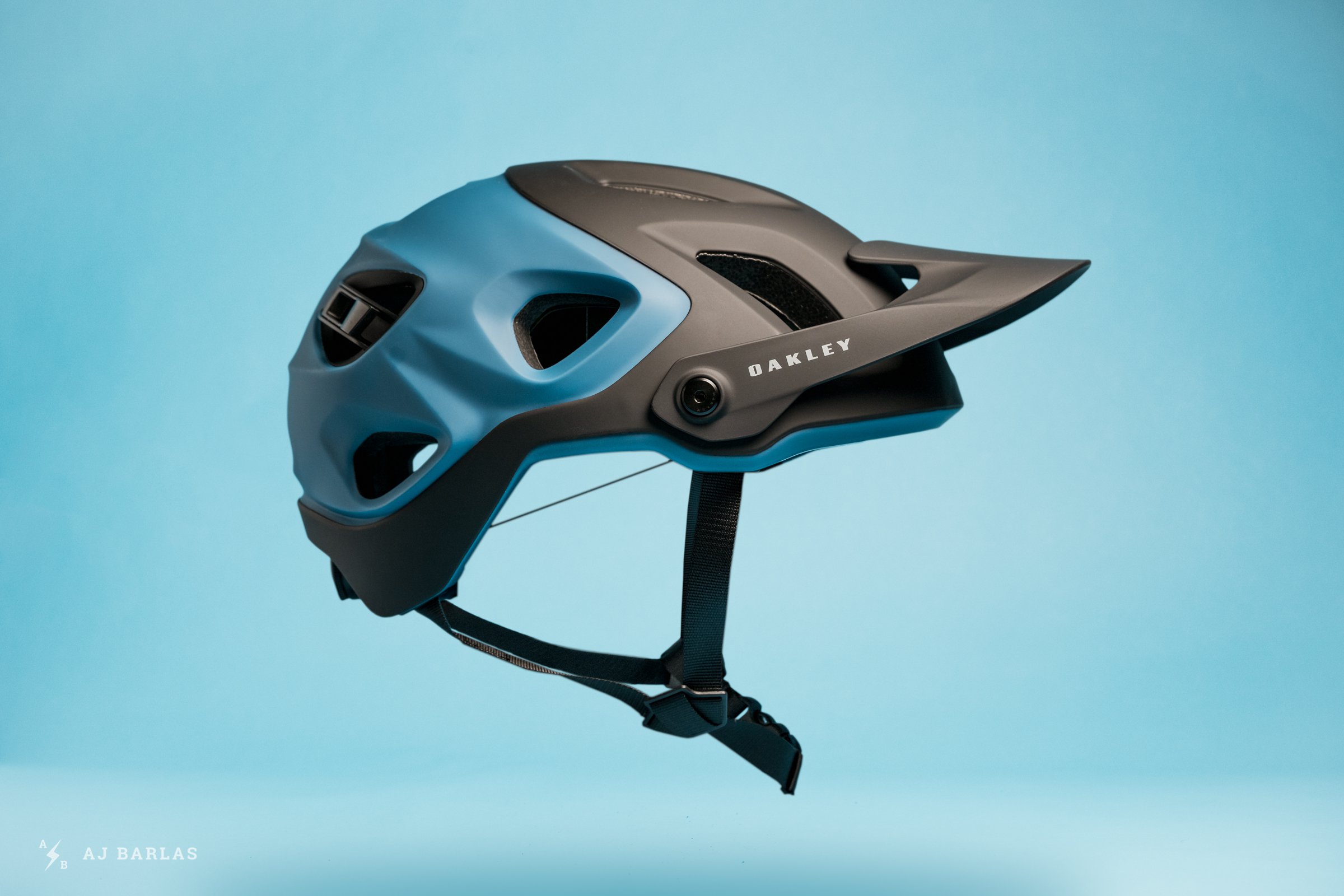 Subtly functional. Front to rear the DRT5 offers heaps of functionality even if it doesn't appear like much is going on.

I’m a fan of the new DRT5 from Oakley. The only thing I could hold against it is the 200 USD price. It sits above the Ambush (180 USD) and the MIPS equipped A1 (139 USD) but offers more functionality. There’s a proper place to stow eyewear, saving me from losing another expensive pair of glasses, and it breathes better than both the others. The ribbed silicone strip is an improvement on foam in terms of both sweat control and fit, and while fit is personal, this is the best fitting helmet I've put on. 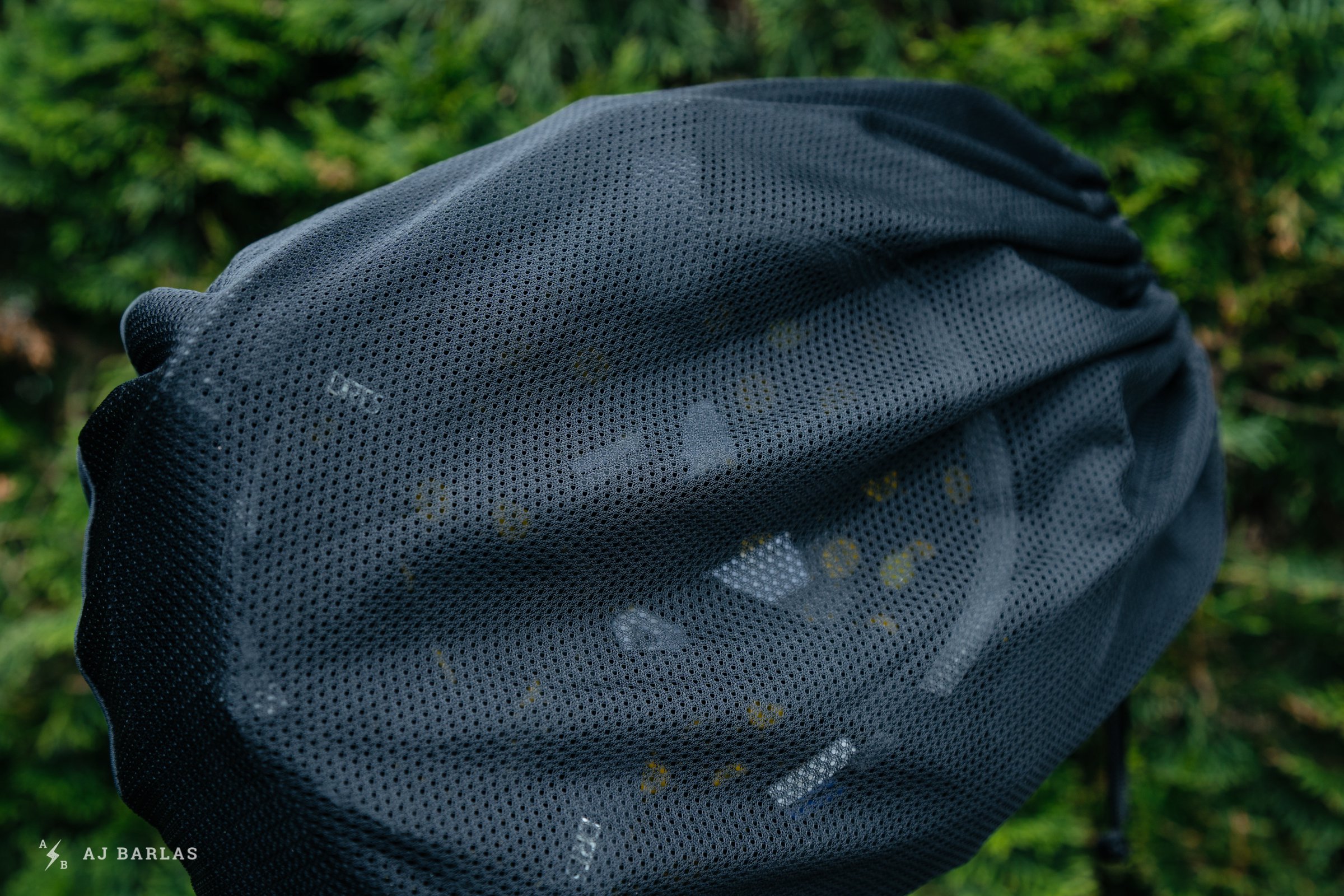 The helmet also comes with a storage bag… 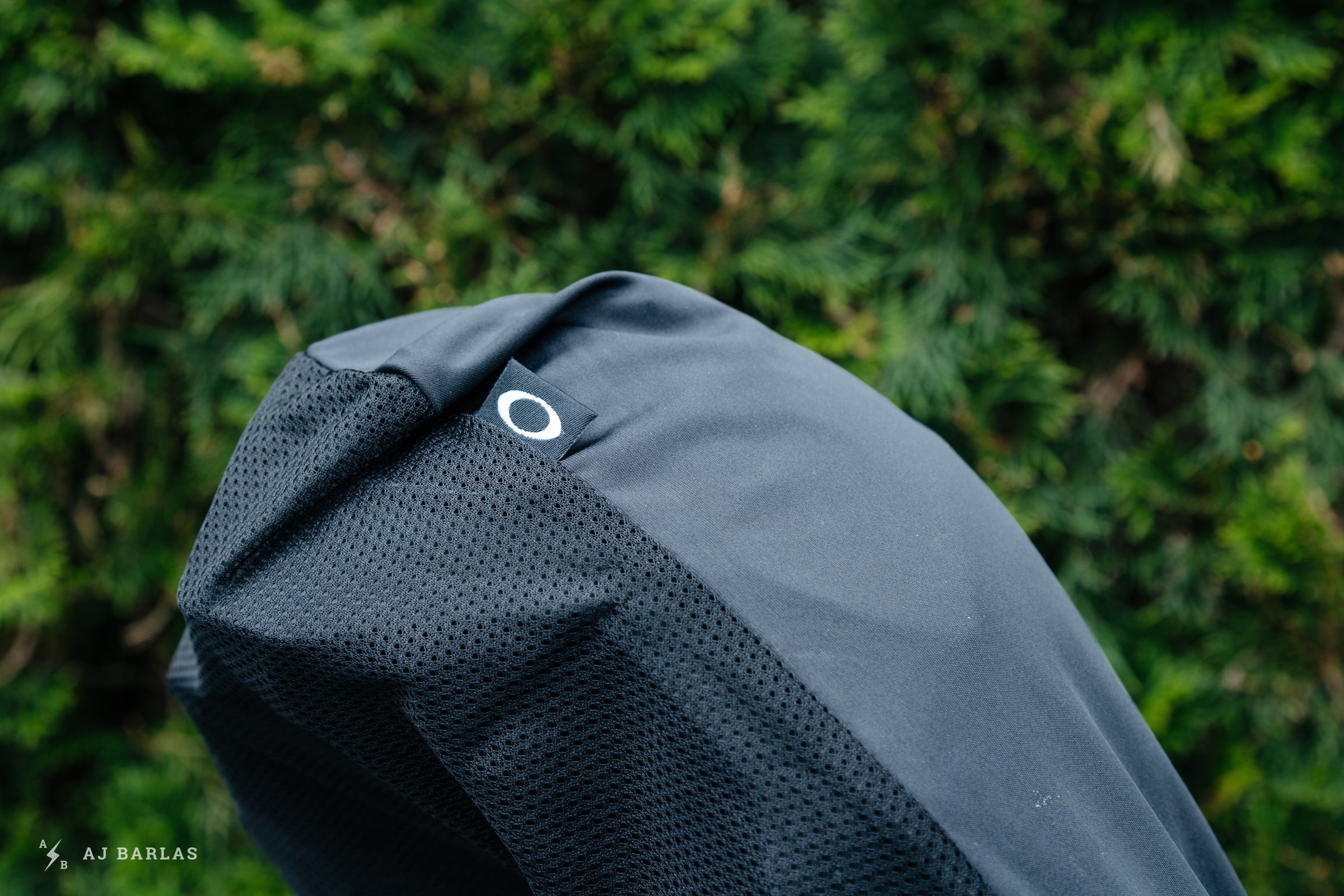 The bottom is mesh to allow the stink out and the top is a soft material. 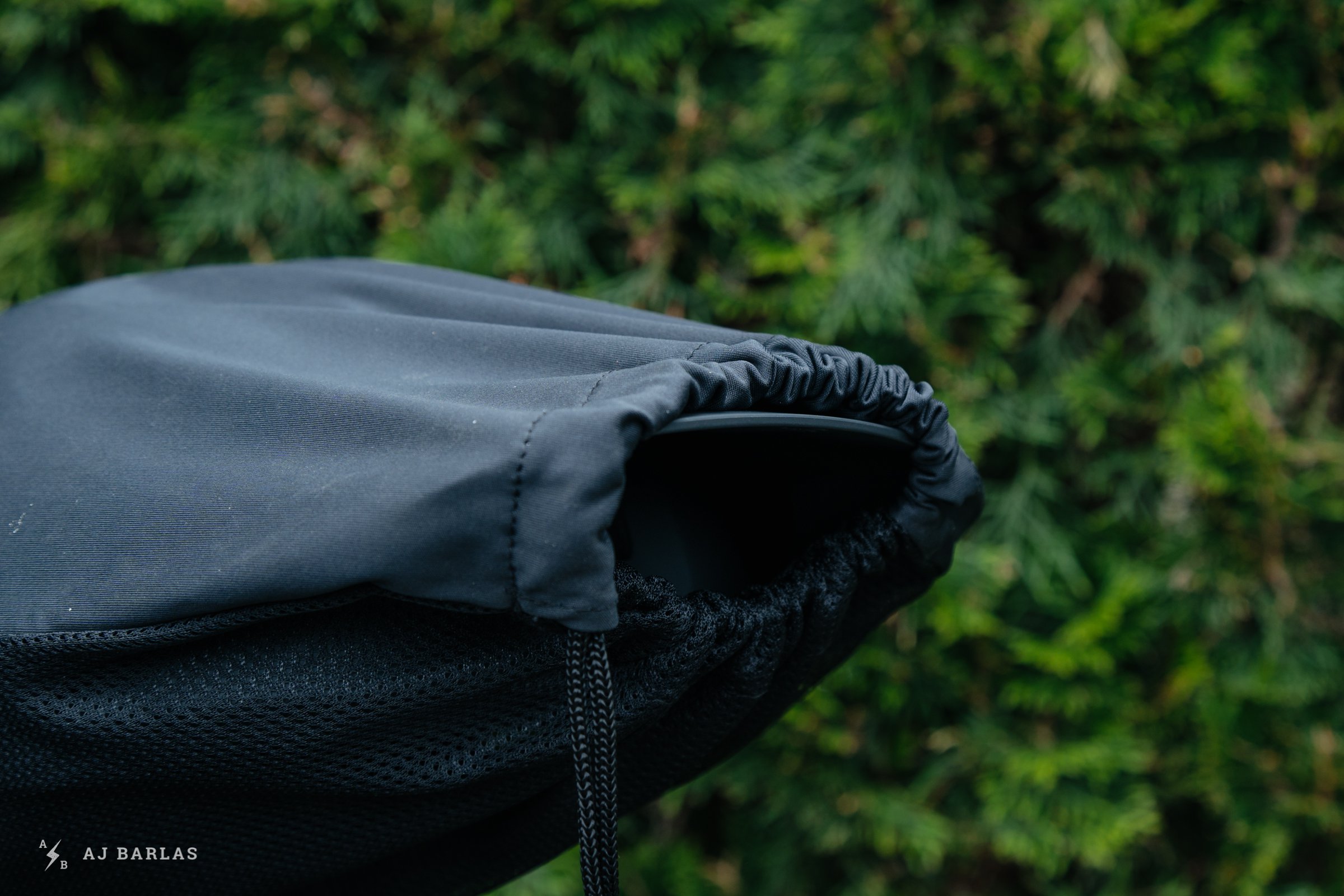 It features a draw-string closure.

As someone who rides the climb with their glasses attached to the helmet, appreciates a well-ventilated and comfortable helmet, and wants the coverage of most modern all-mountain lids, the DRT5 gets the nod. I also feel it looks good and if we’re being honest, it’s also a deciding factor in many helmet purchases.

Interesting. I so wanted this to fit my head as I'm an old Oakley MTB fanboy from along time ago..

Sadly I have two little spots on my head (horns growing in?) That just didn't work with this helmet.

Looks awesome though. Have fun.

The glasses mount is awesome. I'm a sweaty bastard and can't climb with glasses on without them getting covered in sweat. Stoked to see a helmet maker address the obvious glasses issue.

regarding the stats about crashes... I would ask whether the severity of crash locations and potential damage matters more than frequency of crash location. As someone who landed on the top of my head rather violently last summer, I am convinced the helmet absorbed enough of the energy to save my neck. Point being, I'm not sure if frequency of impact location is more relevant to the desired outcome than location of impact.

all that said, this looks like a nice helmet. I hope it's still around when I am shopping for my next helmet.

Also, I'd love to see pictures of your forehead after a long ride with this helmet on... How long does it take for the marks to go away?!

Interesting points slyfink. You’d probably then want to add the severity of the crash as well. Those two elements added make for a very complicated study. If I ever come across that info I’ll be sure to share it with readers.

Good question on the forehead. I’m not sure what it looks like currently as I don’t tend to look in the mirror unless absolutely necessary—there isn’t much to look at, haha. I’ll try to remember after my next ride in the helmet and will take note. I will say though, my forehead doesn’t feel irritated after a long ride with the silicone strip against it. The ribs are quite soft.

I wear a Leatt helmet with turbine rubber disc things. The front one does indeed leave a cyclopian circle on my bald forehead for a while after a ride. The silicone ribs will probably make you look pensive for a bit.

Confirmed by a friend. After a few hours in the helmet the ribbing of the silicone left marks in my forehead for a period. Not sure it's of any importance but wanted to let you know.

GREAT helmet! Loved it just for the glasses holder but unfortunately my weird shaped head did not fit a medium and large was too big. Def, try before you buy. Man it wish it fitted, sunglasses/eye protection holder of some sorts should be mandatory or helmets over $150.