What piece of kit could you not live without? As the end of the year approaches, we begin to look forward to the next and the chance to start putting some of the new gear we found under the tree to use – but what about that stuff that always makes it out on rides with you? We asked our editors and contributors to put together their “Best Of 2013″ with one caveat: it doesn’t have to be fresh, but it does have to be reliable. NSMB’s head honcho Cam McRae drops in with his picks.

I spent the first half of 2013 and much of 2012 off the bike dealing with concussion symptoms. I wasn’t locked in a dark, rubber room but I was taking the doc’s advice to a) keep my heart rate below 52 and b) not cork my melon again. So the comments that follow will inevitably be golden-hued because I’m ridiculously happy to be a bike rider again. Even mediocre bikes look like rainbow jersey-wearing unicorns to me right now so my ability to be unbiased about really good bikes is at an all time low. I even retain affection for 26″ wheels despite reports they’ve gone out of round.

When I began riding again I saddled up a 2013 Specialized Enduro frame. S-Works no less. I slapped on a set of Easton Haven carbon wheels, an XX1 group, a Reverb dropper post and eventually a Pike Solo Air. I could gush about just about any of these elements but I’ll try to zero in.

This shit is legit. Excuse my expletive but the 11-speed cogset coupled with (in my case) a 30 tooth ring has changed my world. It’s answered just about all of my drivetrain complaints. It is the quietest propulsion system I’ve ever used on a mountain bicycle and I haven’t once in seven months of technical riding dumped the chain. When Shore riders were bound to use a triple crank with only the middle and small rings we would always spin out our gears when speed ramped up. A bash guard was essential because of the size of the middle ring and often a chain device as well. Even the best chain devices suck – and those designed to work with two rings were (IMHO) the most challenged of all. All of that complexity and weight is gone. 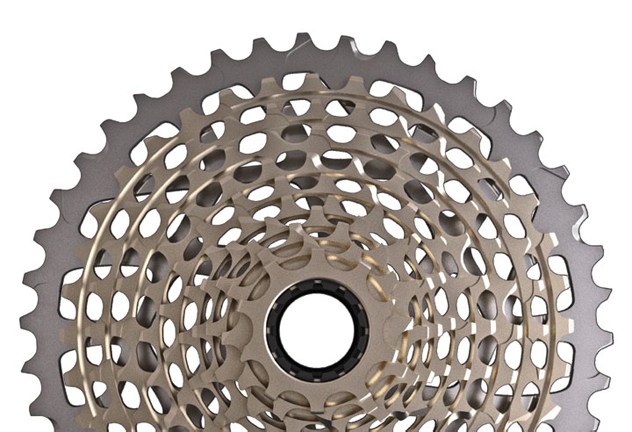 Cam’s completely sold on the silent and reliable performance of SRAM’s XX1 1×11 group.

The good news is that much of what makes the 1 by 11 work so well can be Franken-biked over to 10-speed drivetrains. Get yourself a narrow wide ring of some sort (from RaceFace, Absolute Black or Wolf Tooth) and add a 42 tooth ring from OneUp and you are almost golden. You’ll need a clutch derailleur of some description and you won’t be entitled to a 10 tooth smallest cog without a SRAM X-Dome cassette and their XD driver body – but you’ll be much of the way there. Expect further trickle down from SRAM (XO1 is mostly trickle across) as well as Shimano’s response. May the front derailleur rest in peace.

As soon as I had a duallie I began chasing a one-bike solution. I had a Santa Cruz Bullit I used for climbing Fromme and racing DH. It wasn’t an elegant choice for either. And then for several years I gave up my quest and built a quiver. The culmination and refinement of technology like carbon frames and rims, tubeless tires, dropper posts and the aforementioned 1 by 11 drivetrain have made my one bike to rule them all a reality. I’ve slimmed my Enduro down to 26.14 lbs with Maxxis DHR II 2.3 tires (cracking so far) and I’d happily race XC on it or ride Goat’s Gully in my awkward fashion. 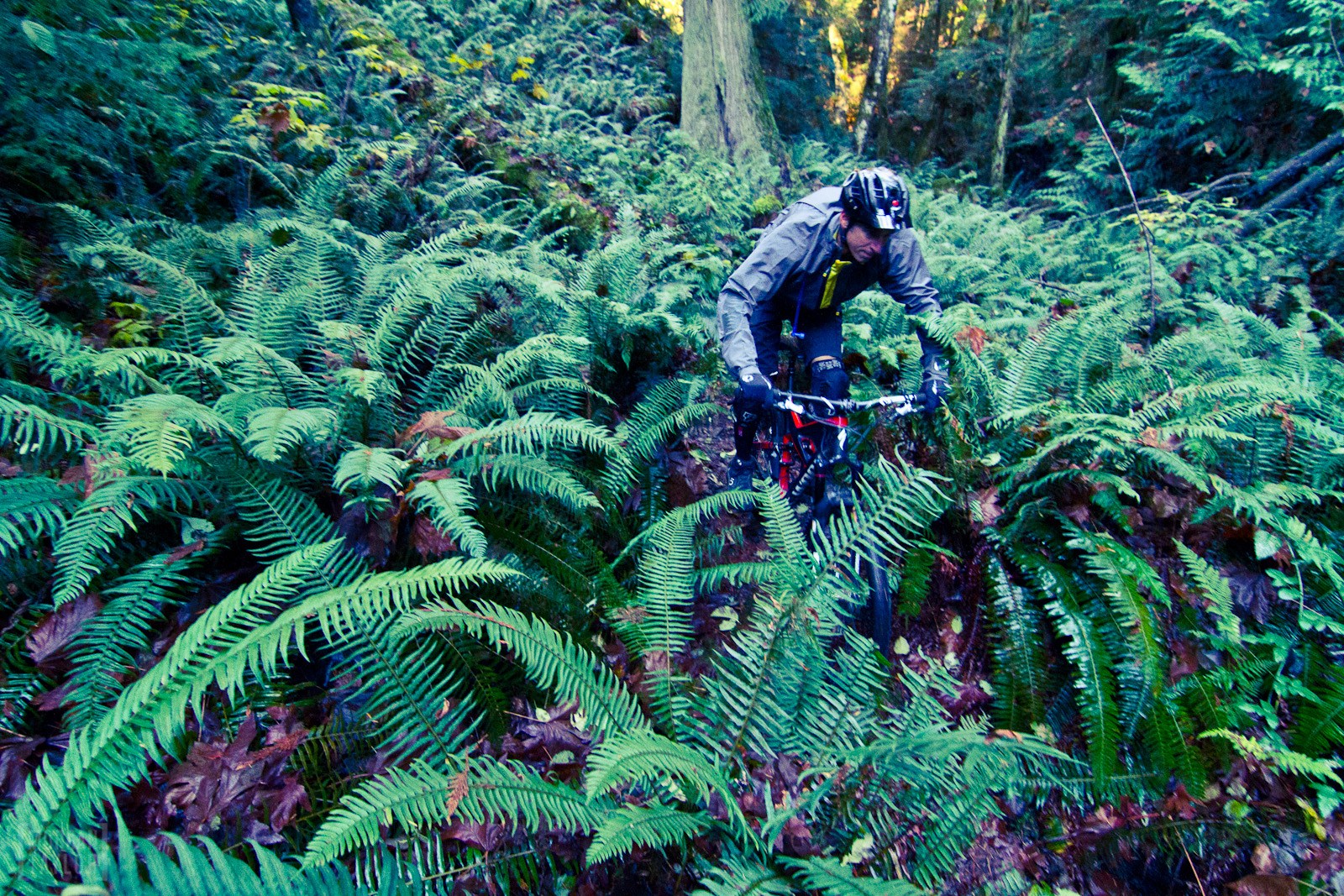 With its lack of girth, 160/165 mm of travel and 26″ wheels the bike is lively and fun and adept at tackling rough sections of trail. With the Pike up front and a 66.5 degree head angle it craves steeps like Danny Hart. The fact that these bikes are being made by so many manufacturers at so many price points is great news for riders. Oddly these bikes are made for actual mountain biking and there are good choices in each wheel size.

Nope. Not this guy.

I’m often late to the party and this was particularly true of tubeless. I kept seeing my friends have issues with burping on impact (sometimes the dreaded double burp) or damaged rims seeping air and I decided it wasn’t worth the hassle. Reports improved and I gained access to carbon rims (which are less likely to dent) so I took the plunge. I managed to seat tires, first Specialized then Maxxis, easily with a floor pump and I’ve yet to have a single issue during a complete season. That’s right – no flats. 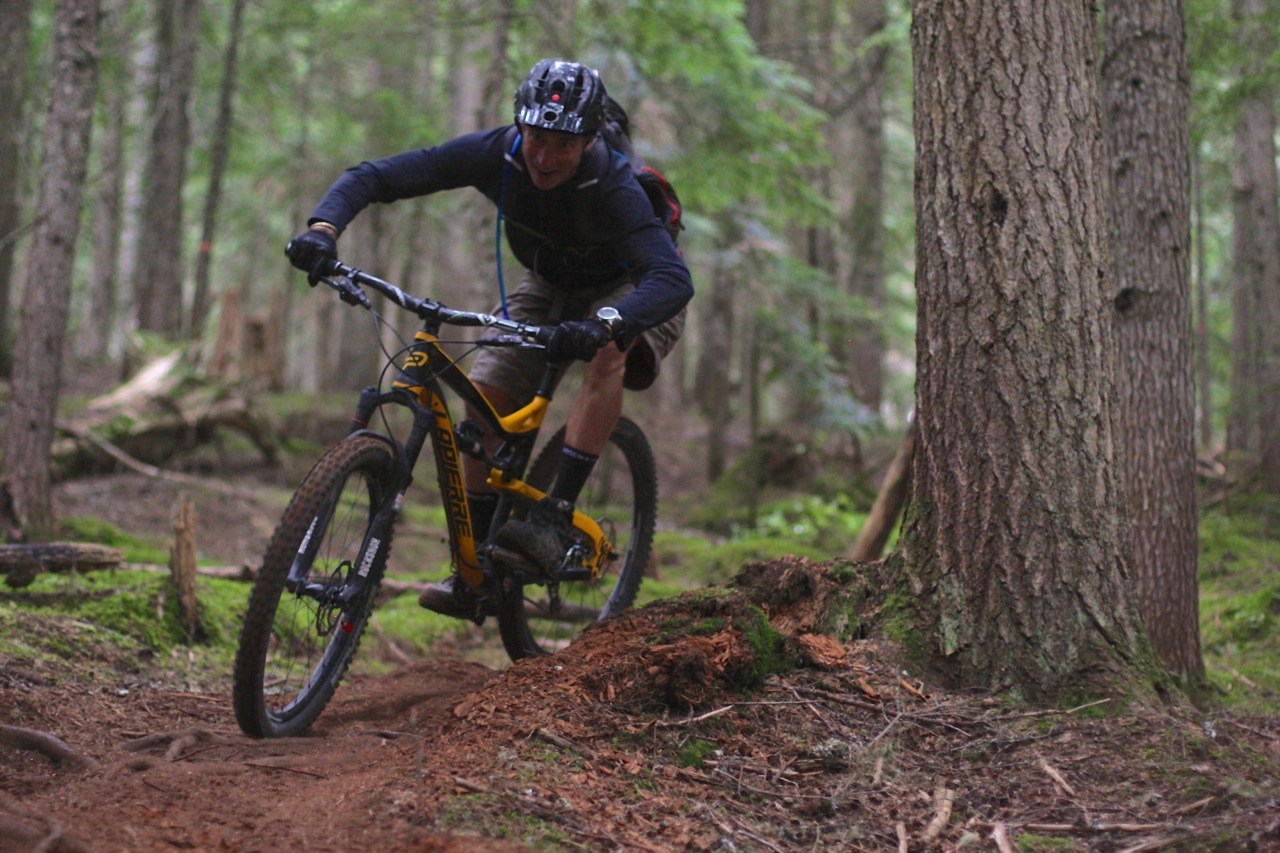 The world rotates just a bit faster when another guy gets over his fear of tubeless. Photo Pete Roggeman.

I’m able to run a slightly lower pressure without flatting but the biggest advantage I notice is the feel of tubeless. With one less membrane betwixt you and the trail it feels that compliance and grip improve without any sacrifice in rolling resistance. On my last install I was aided by Uncle Dick’s Bead Slip which worked as advertised. There may be a slight weight advantage but I previously used light tubes and I pour goop in liberally. On a DH bike I’ll likely toe the pneumatic line, but any smaller bike will forgo tubage.

Who could argue with feather-light 6″ bikes?

Just got a flat on a test bike. A pinch of course. I have no recollection of how, what or when but it was a good one. Since the bike (Scott Genius 700) is tubeless ready I just poured in some sealant and bam - tubes begone!

glad you are liking the tubeless

Craw, as a taller, heavier guy you'll love the DHR2 TR 3C set up tubeless. It has so much casing support and bite while still rolling reasonably well. I've tried just about every other tire very recently and keep coming back to the DHR2. When I want to mix it up I'll throw a DHF or HR2 up front.

Craw - give the Maxxis Minion DHR II a try. I'm rolling the 2.3s (3C EXO) front and rear and they have been amazing.

If Cam can go tubeless then so can I damnit!