I’ve spent a great deal of time this season trying to learn the ins and outs of the North Shore mountains. I’m nowhere near informed; in fact I’m fairly positive I’ve barely even scratched the surface. The history on each mountain appears to have given them their own identities, and so for me as an outsider, I found it incredibly intriguing. 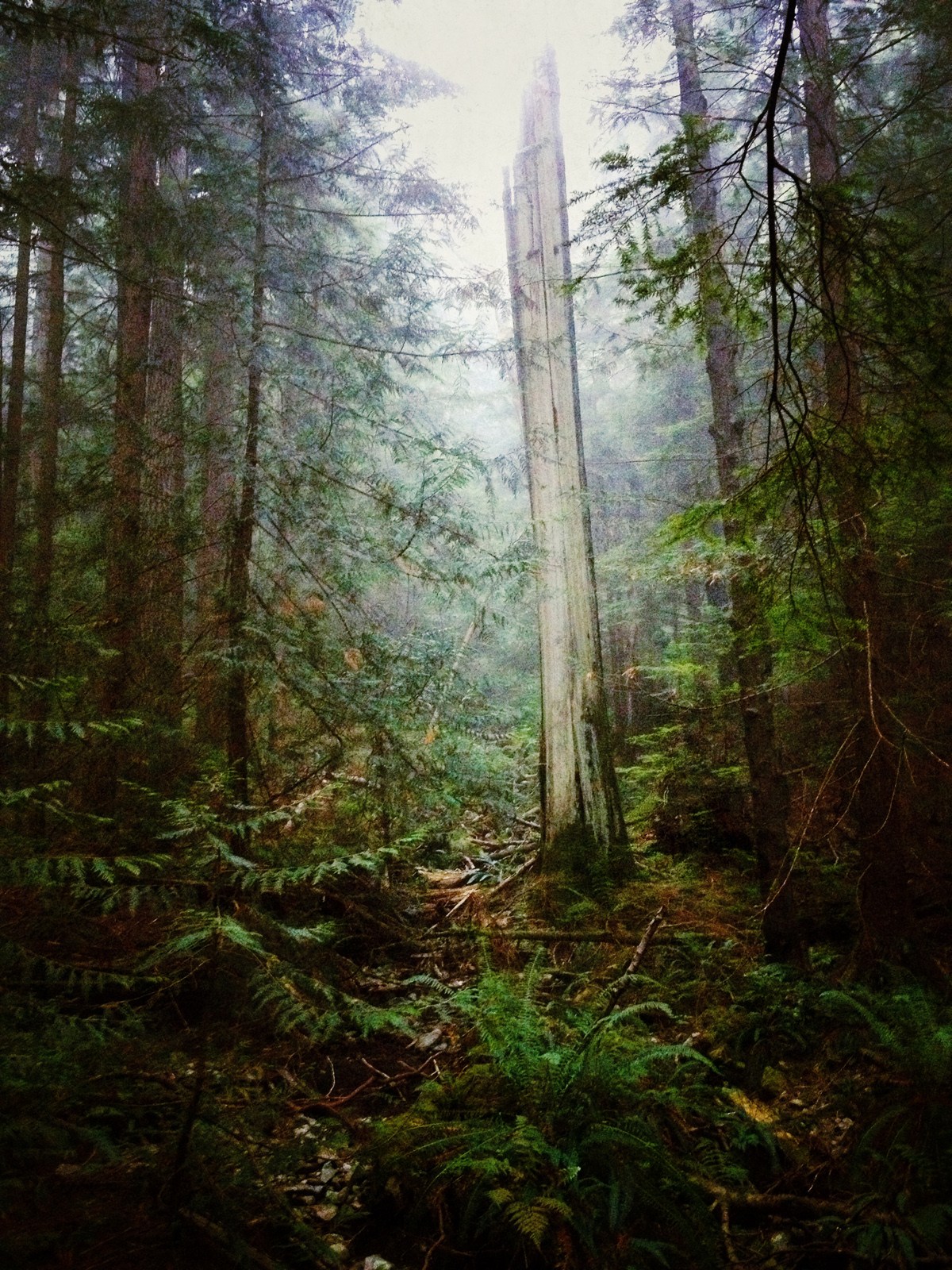 Sometimes the trail isn’t the only thing you’re after.

One thing I’ve discovered is on the Shore, it’s really easy to give up elevation quickly, and sometimes without much reward. Spinning up to the entrance of some of the most famous trails in mountain biking and being underwhelmed with the descent can be incredibly deterring. Over the past few years I’ve made some great friends who are long time Shore locals and absolutely rave about the place, so I went exploring and am happy to confirm, I found the appeal. 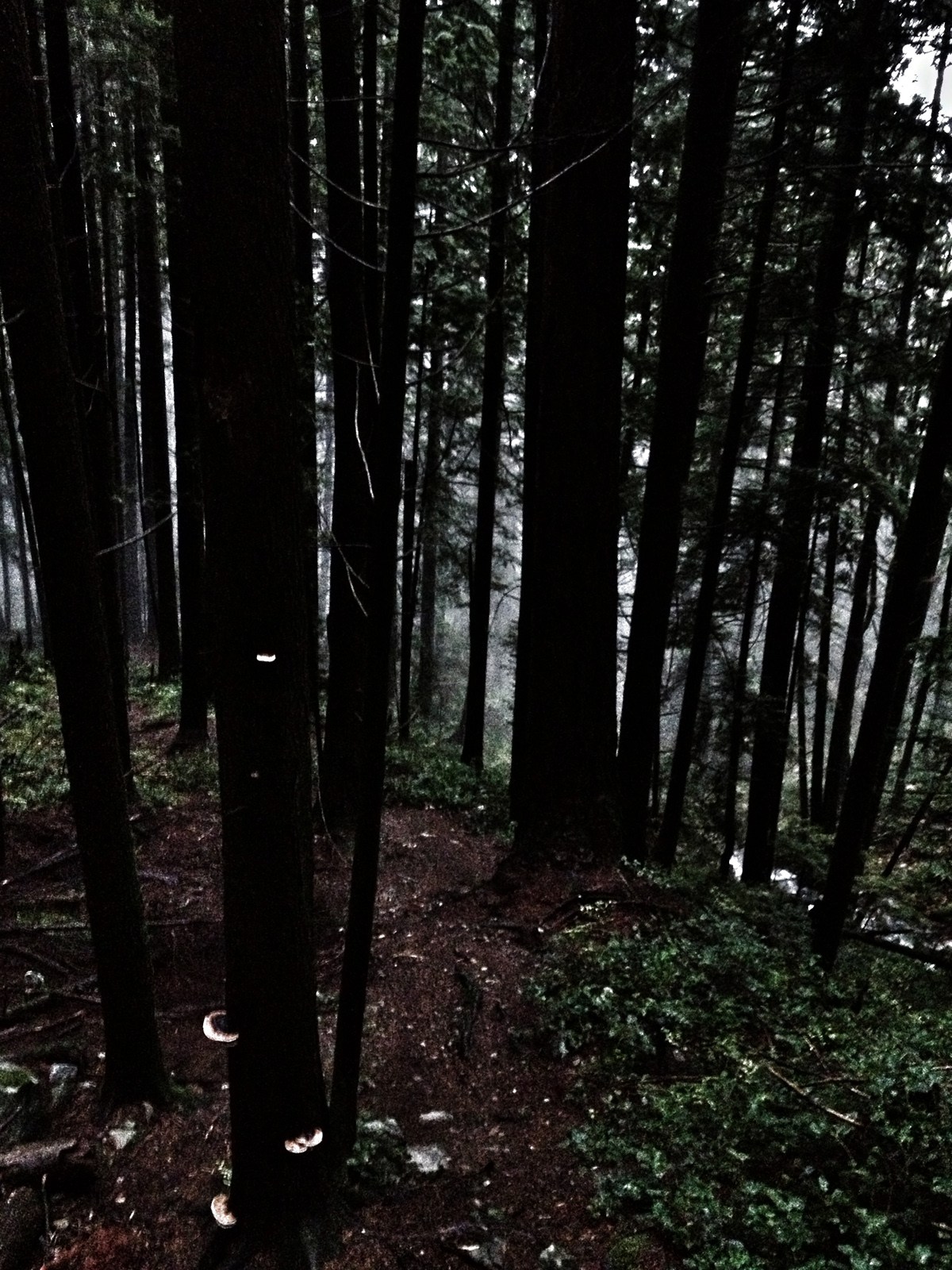 But without a good link-up of trails, you might not have the best time out there.

This season has been incredible up on the local mountains and the success of my time up there has been result of putting in the effort to unlock the terrain. Admiring the features displayed on topographic maps, combined with plenty of hiking, failed descents, and wrong turns, I’m happy to say I’ve managed to put together a few link ups that satisfy my riding needs. 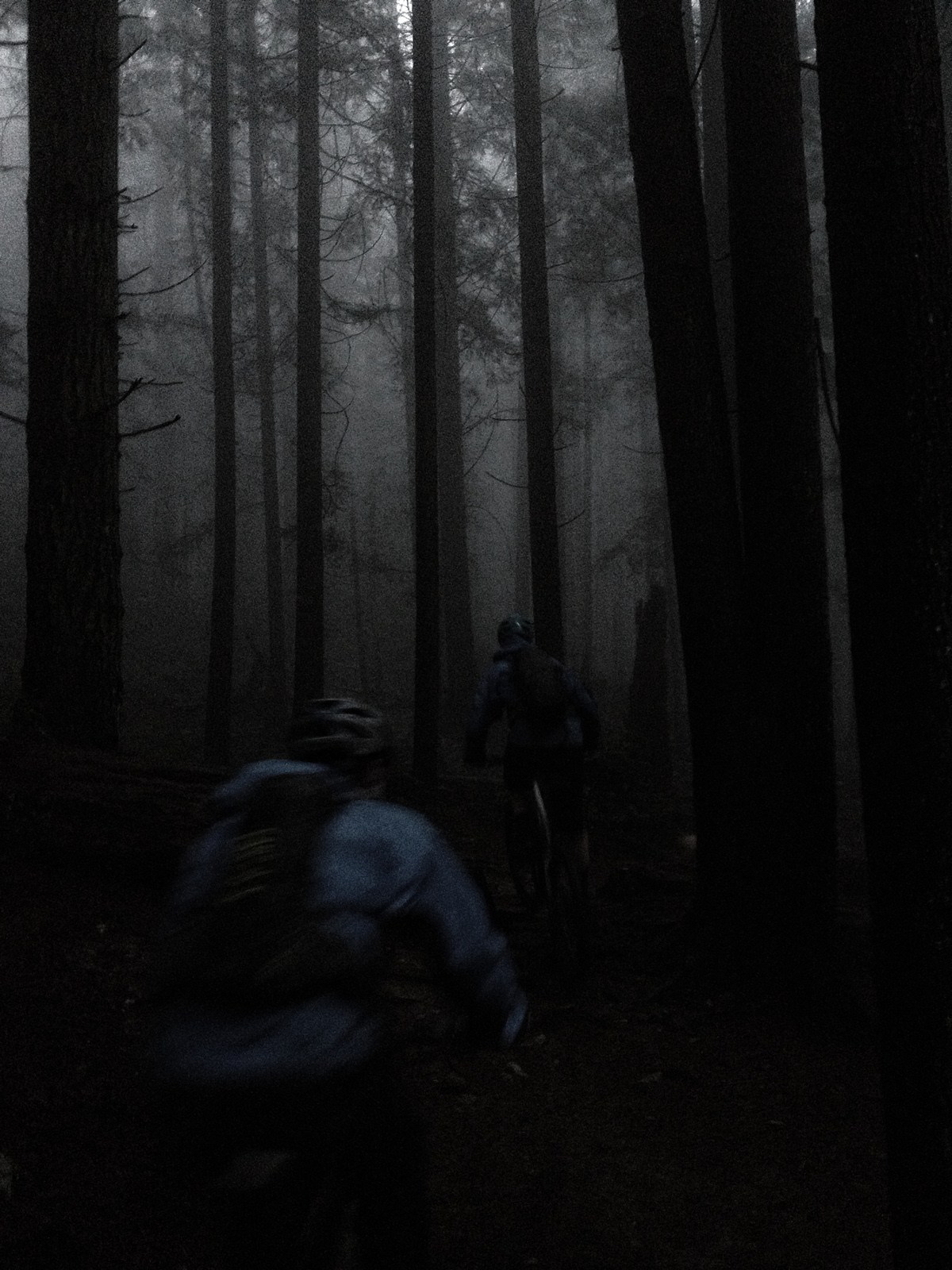 I was having lunch with Wade Simmons last week, and he jokingly asked the ultimate loaded question, “So you’re a local now?” I thought carefully about my response considering the nature of the question, who was inquiring, and the variety of answers I’d overheard living in the transient town of Whistler. I replied, “I only got my BC driver’s license this month, Wade. But I’m doing my best to maximize my time in the woods.” 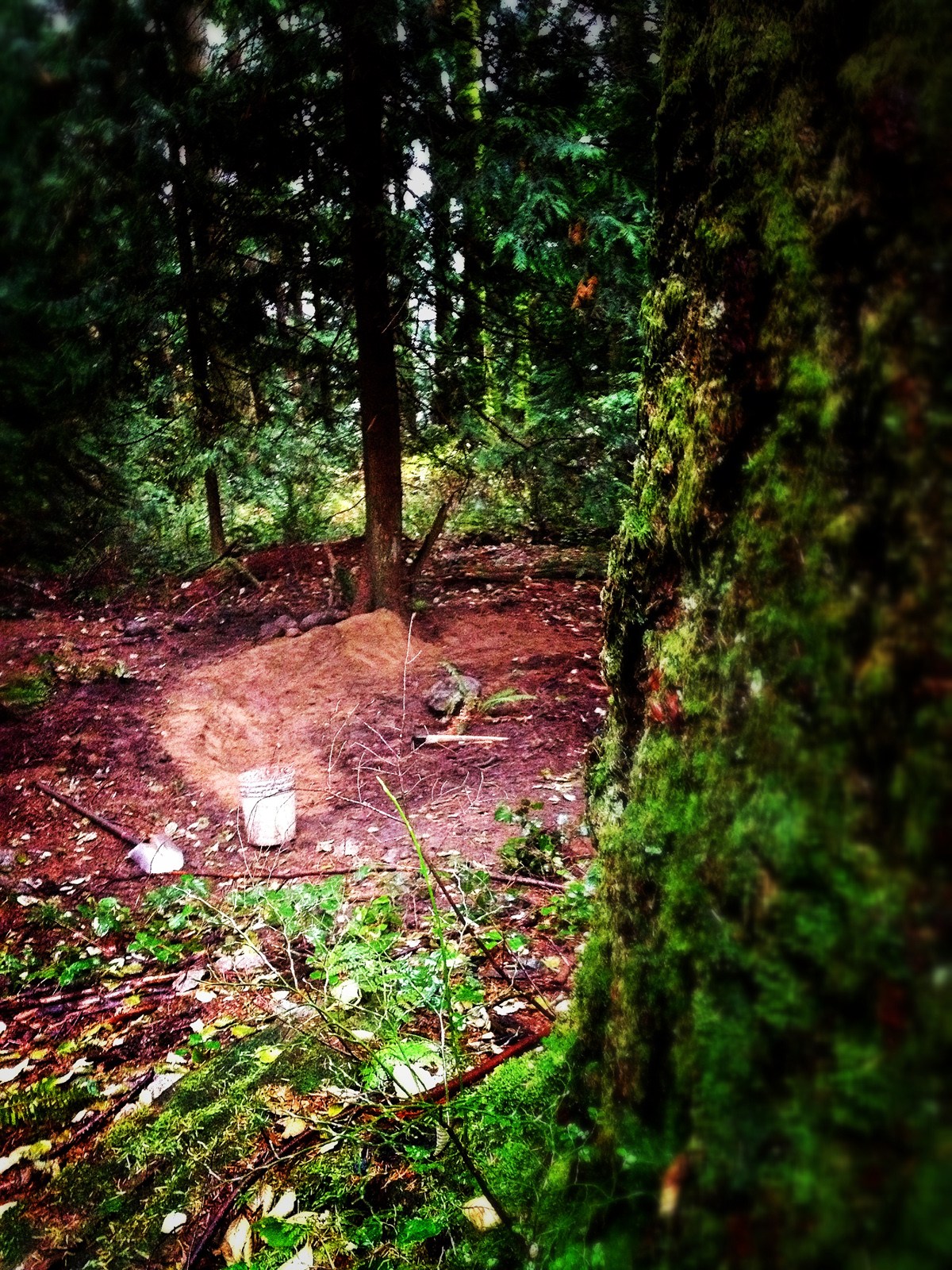 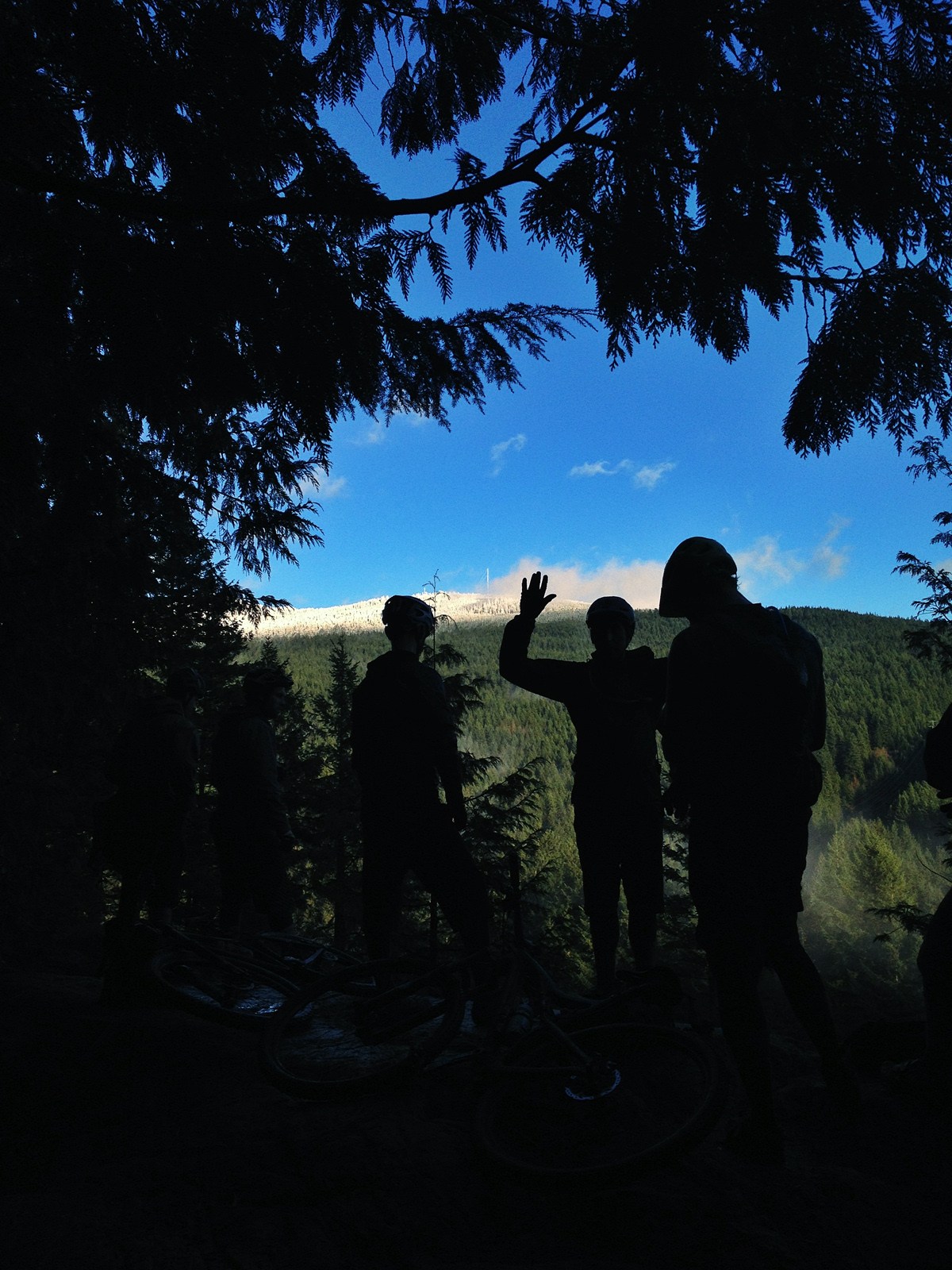 Riding with friends is a great way to find new loops.

Stephen’s experience with the North Shore learning curve is not uncommon… so as he said, what’s your loop?!

I don't live on the Shore, but when I do ride the Shore I do the longest loops I can tolerate. In the winter that's on a SS, snow dependant. Fromme I like 7th/Leppard/Crinkum/Kirkford/Griffen/KOS, then back up to Executioner/Dreamweaver, out BP then if I have anything left I'll do a Bobsled. On Seymour I almost always do Indian Arm to BP, up to TNT/Cabin, the top part of Dales, cut up to Incline, Powerlines to Pingu/Pangor, Bridal/Greenland, BottleTop, back up to Bridal, S&S (now will include Salamander!), down to the Golf course, back up to Empress and down and out. I'f it's snowy I'll just go as high as BP and to SD, or CB. Seymour I ride with gears;-) My loops always turn into sort-of figure 8's 🙂 I don't know Cypress very well as all.

Hey my blue jacket glows in the dark!!

It sure does Steve, that was a good pedal that day!

I used to really like parking on Braemar, riding Dempsey climb to BP, optional Bobsled lap, Ladies to BP and then Lower Crippler right to the car. I feel like Lower Crippler and Ladies proper go together very nicely, skills-wise and in terms of on-trail experience.

Now that I've got daddy responsibilities, I don't have as much time for the longer loops. My typical go-to ride in the summer was ladies to bp back up to bobsled and finished with natural high/immonator.

Although, one of my favourite fromme loops throw a little old school in with the new school: bookwus to ladies (or expresso) to bp to bobsled and finish with natural high to immonator.

Favourite loop on Seymour. Old buck to BP to Dales, back up the power lines to Pingu/Pangor, back up to the BP and find something fun to finish off.

Favourite Fromme loops would be Per Gynt to 7th/Leopard to Executioner/Dream Weaver. Another good loop is 38 double D to Floppy Bunny to Bobsled to Espresso to Dempsey trail.

After a season of living in Van and riding the Shore daily I can honestly say that there is nothing quite like it! Where else can you spend 45min (or so) peddling to the top of 7th and another 45min's to get down again! Perhaps I'm just really slow, but I have never seen a hill that gives you so much love for your peddle.

Though I'd drive to the mountain alone I NEVER rode alone. There was always someone on the trail ready to show me a new line or give me a hand when I screwed up. The loops are amazing, but the riders made it special. Big thank you to Mike and all the beautiful people at NSRide who made that summer Brilliant.

On Fromme, it would be 7th to Lepperd, up to Expresso, out on BP, up to Natural High, then Griffin Switchbacks or Imonator.

If I'm feeling extra energic I'll add Crinkum after Lepperd & head back up from 3rd to 5th SB (not so bad), and I'll add Floppy between BP & Natural High.

Welcome to the Shore LokeDawg!

You've got some great link ups Mark! Thanks for showing me some this season. I guess it helps when you've put in the time!

My go to Fromme Lap was to climb Griffin / King of the Shore / Roadside Attraction / Warden's / descend Executioner / Dreamweaver / climb Dempsey / BP / Lower Skull Area. Awesome up's and down's where the Mountain Highway Climb is a nice chance to zone out and casually spin.

Fromme has some of my favourite trails but avoiding the climb up Mountain Hwy is pretty tough (impossible?) and does break up the flow of a 'loop'.

My favourite Seymour trail is Pangor, though not the most loop-able. I like a Pingu / Pangor / Empress lap, though the Old Buck / BP climb isn't great. My favourite Fromme lap is Seventh / Ladies / Lower Ladies / Natural High (or similar). Maybe with a Bobsled lap thrown in - Pat's new Floppy section will surely become the go-to warm-up / cool-down lap in Spring!

^^^Nice. That rooty climb is a treat.

I like to ride the lower Seymour XC stuff from Hyannis. Hyannis to Bridle to Salamander, Sticks N Stones, right on Bridle and up the consistent rooty climb to the bottom of Severed, Cardiac Bypass back to Salamander, to descending that awesome section of Bridle back to Hyannis. A sub-loop out to Greenland and Bottletop is always a treat. A big plus to this loop is it's reliably rideable year round.

Crinkum side to Griffin is my standard quick winter night loop

When I'm in town I stay in the Cove, so the majority of my riding is on Seymour. I have a few favourite Fromme loops, but I'm sure they could be improved. I usually climb high in the beginning when I have the most energy and do some Bobsled or Bunny loops at the end, finished off with some playtime on KOTS and the Griffins. I love Ned's on Seymour, so I often take it and Bottletop (Ridgerunner could be subbed in but I prefer BT) then circle back along Bridle Path, back up OB to BP. Then I'll usually drop in on Team Pangor. It's nice to have the options of Boogieman and Severed D, though. (Severed will mean more pedal time on Bridal.) Lots of energy? Start with Dale's, and hike-a-bike back up the powerlnes, ride up BP when you hit it and take the above loop from Ned's or hang a right and drop in on Severed, BM or Pangor for a shorter combo. There are other trails obviously, but these ones are placed nicely to combine different loops for a little variety.