A lot of people seem to like the Aurum, and a lot of people like the look of the Aurum Carbon. Throughout the test period – which occurred during August and September within the Whistler Bike Park – I had numerous riders approach me to ask about the Aurum, some of them curious to find out if it rode as nicely as it looked, and some confessed they were primarily attracted to the bright paintwork like a moth to a flame. And I’m with them, this bike does look bloody marvelous. But so what? Do looks translate to performance? I mean, some people say fanny packs look silly but other people also say they do do exactly what they are supposed to do very well… 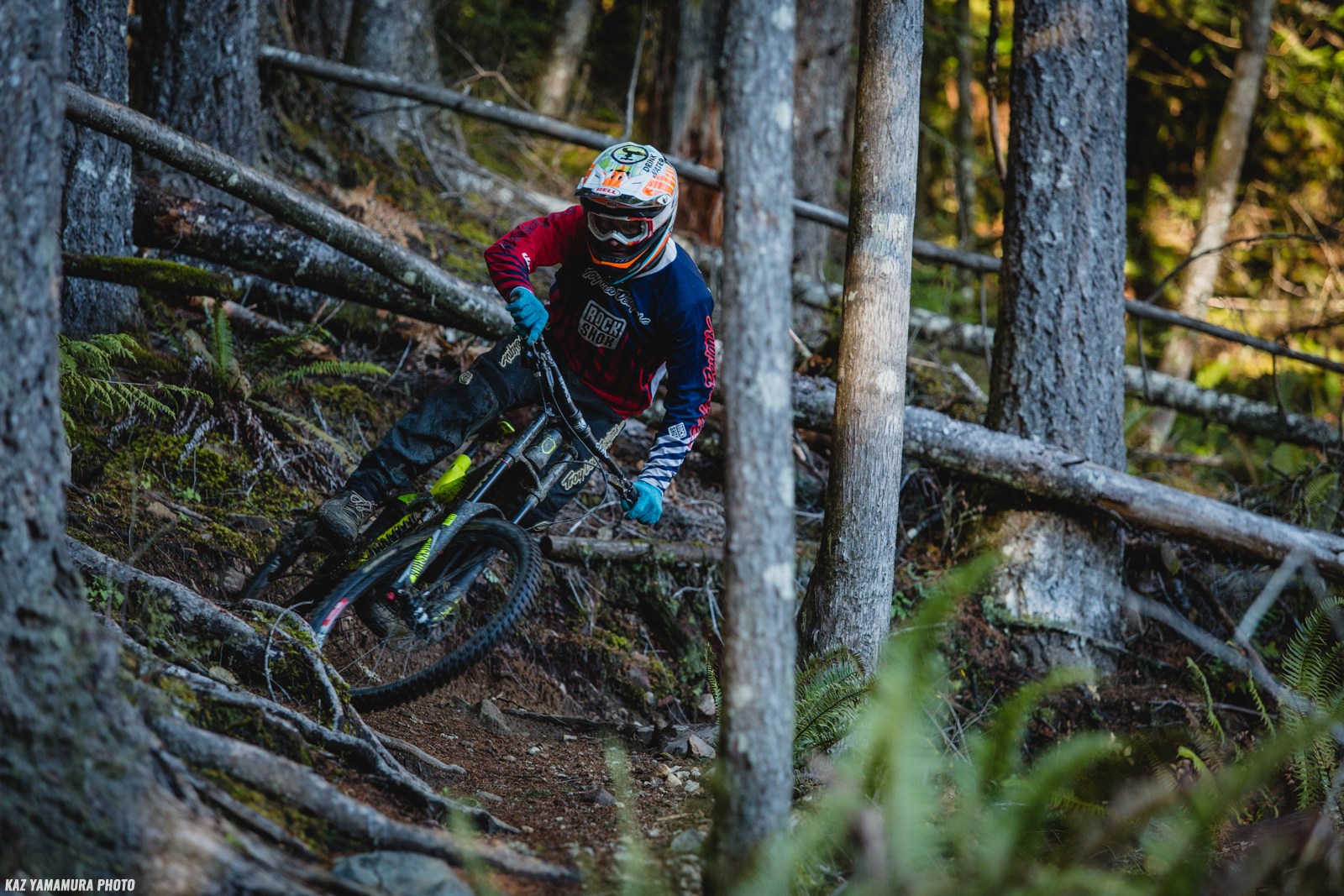 The Norco Aurum c7.1 seen here in the wintery wilds of Squamish shuttles but spent most of the test period in the Whistler bike park.

Anyway, the Aurum Carbon is the evolution of Norco’s effort to produce a world class downhill bike, and while I can’t push this bike to World Cup levels, I was very interested in how it performed at bike park speed and if it was a ton of fun doing so. 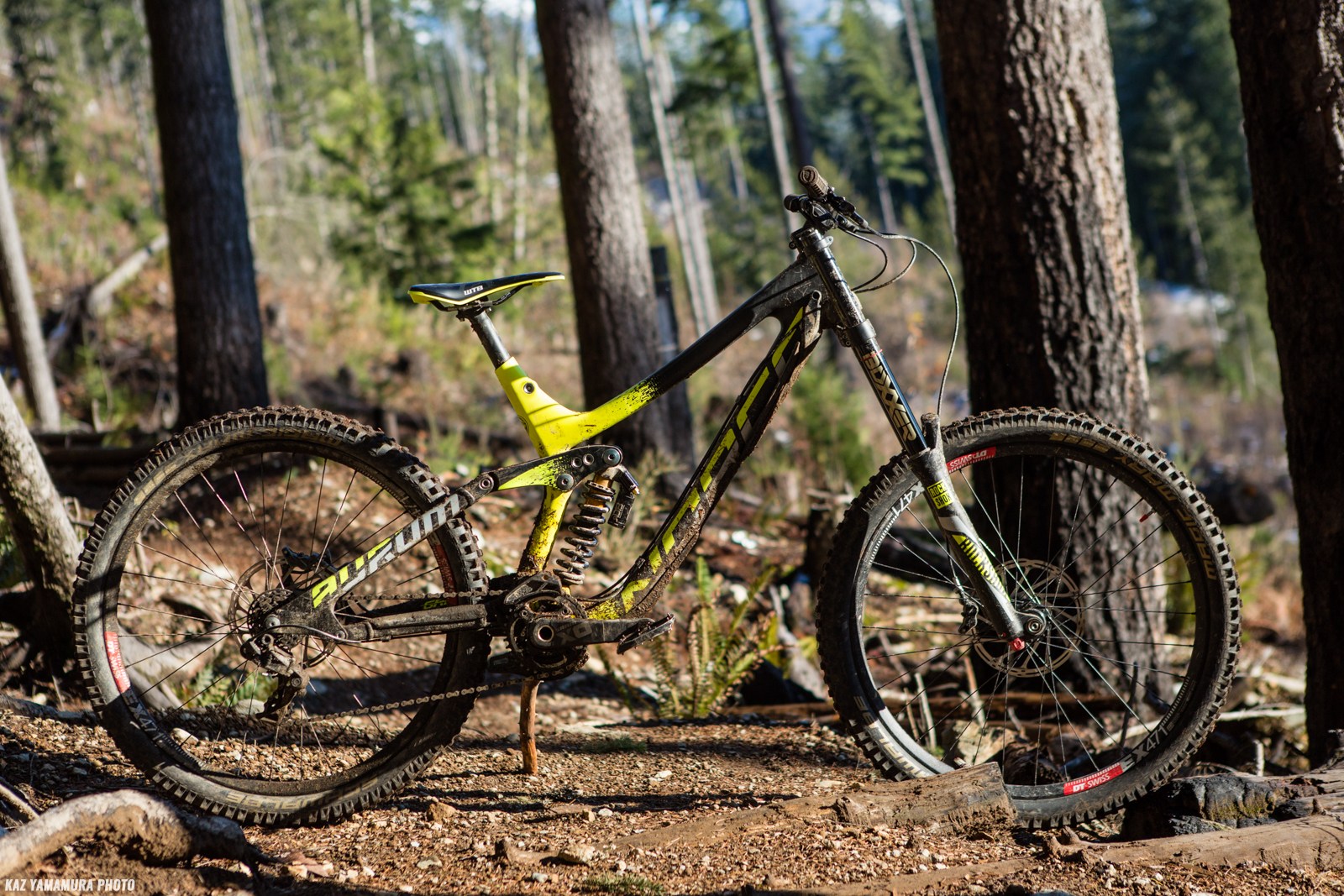 The looks drew me in but did the performance equate?

What I found was that the Aurum feels ready for a bit of rough and tumble. The frame feels stiff and stout which translates to a very responsive ride. It’s sharp and taut feeling which means rider inputs are efficiently converted to edge control. The big burly linkage and the two beefy ends of the frame result in no noticeable untoward flex. For sudden changes of direction the bike moves snappily and when pushing into the bike to cut an arc it felt very planted and assuring. 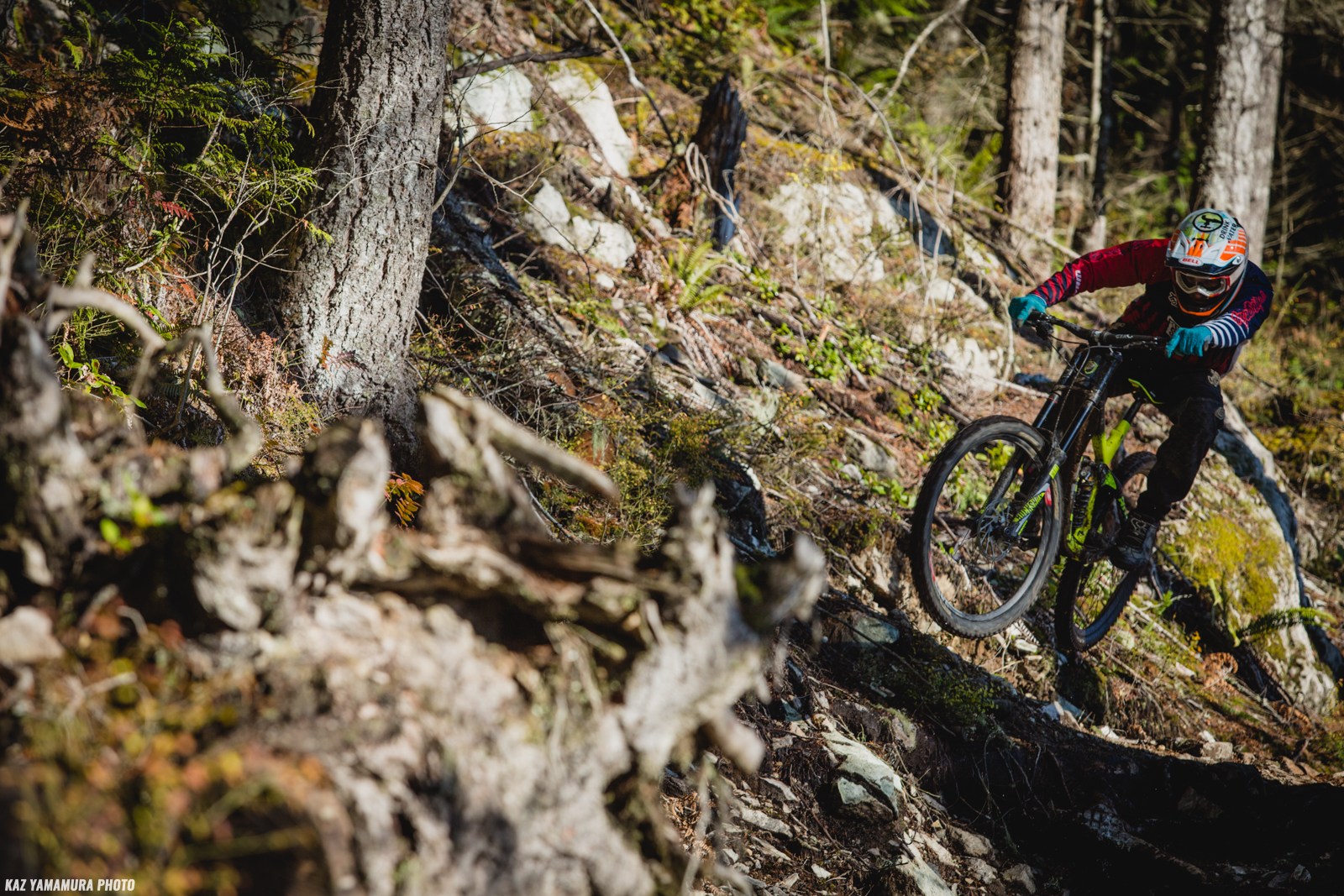 While not the most playful downhill bike out there, it’s not the most monster trucking gravity sled either, sitting somewhere in the middle of fun and capable for a wide range of riders.

The low frame gave a lot of room to move about the cockpit and once I’d got my bar height and bar width sorted, (the test bike was handed on from someone else who had chopped the RaceFace SixC carbon bars down a little too much for my tastes and the stem and bar are both relatively low risers, so my personal cockpit setup replaced it) I felt like I was stood in the right position to squeeze the most from a bike like this. The wheelbase (1245mm on the size large) created a nice base of support and the cockpit (Reach 432mm) gave me all the space I wanted to move about without making radical weight shifts fore and aft. But I have to admit that if I was any taller, the size large (the largest Aurum Norco produce) would likely to be too small. I’m 5’10” and I wouldn’t ride a size smaller, and I don’t know how anyone much taller would get on with the Aurum. 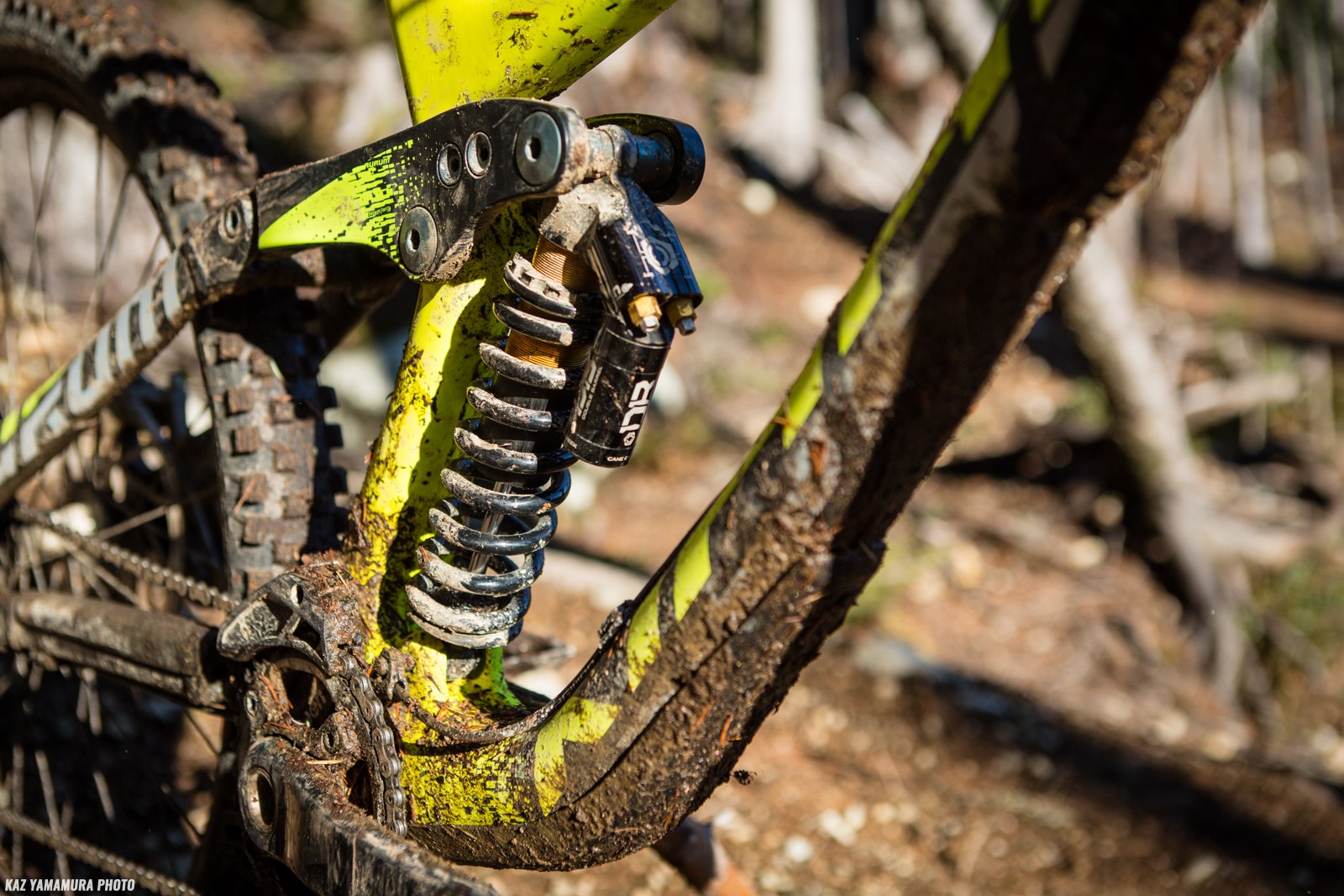 The Marmite of shocks – you either love it or not.

As I said in my First Impressions article. I’m on the fence when it comes to Cane Creek shocks. They allow for an enormous amount of adjustability. So the ability for a rider to tune a shock to suit their personal tastes, riding style and the terrain they are on should be a really good thing. Cane Creek provide base settings for all the bikes they supply shocks for on their website, so after the first ride I knew that how the bike was set up wasn’t working for me and my on-trail fettling wasn’t making it any better. I went back to the base settings and the bike felt like there was more of a foundation but I couldn’t get the bike to feel settled and neutral in the way I’d like, nor could I get it to really feel like I could unleash. It lacked some sensitivity while tracking across rough off-camber sections of trail, felt somewhat blocky on mid-sized hits, but would still blow through a lot of the travel on bigger drops or hits. 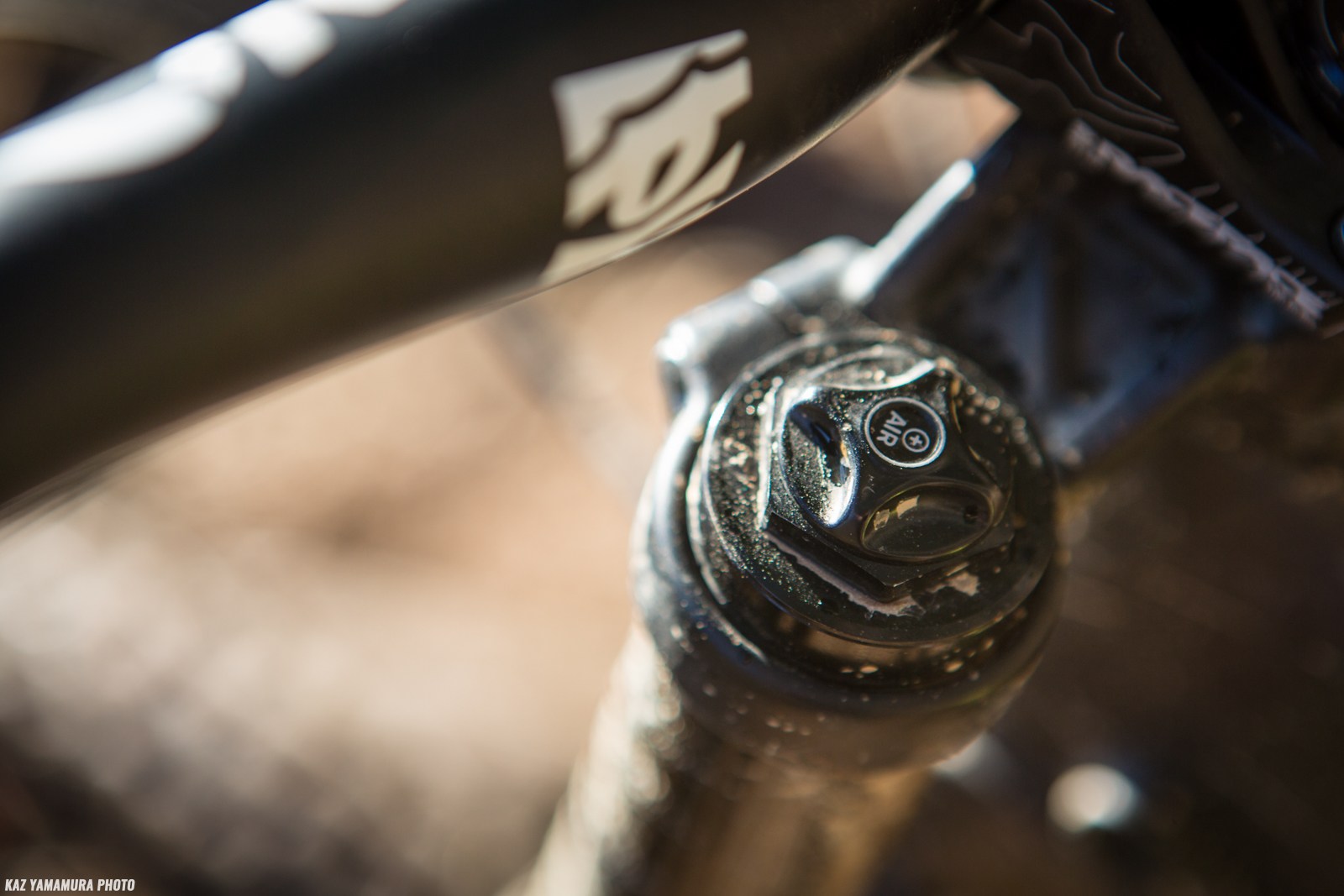 The RockShox Boxxer World Cup is an air sprung fork, which means setup is as easy as a couple pumps and a squirt, and further tuning can be easily achieved.

In an ideal world I’d have all the time and resources to swap out shocks, springs, try every setting that is possible for every different terrain. But what I was left feeling was that the Aurum has a lot of potential but I just couldn’t get the most out of it even with constant re-evaluation of the shock settings. But really, was this my inability to dial in this intricate shock or was this the shock’s inability to easily and effortlessly provide the feel and performance of a top tier, off-the-shelf downhill bike? Am I too simple or was the shock too elaborate? 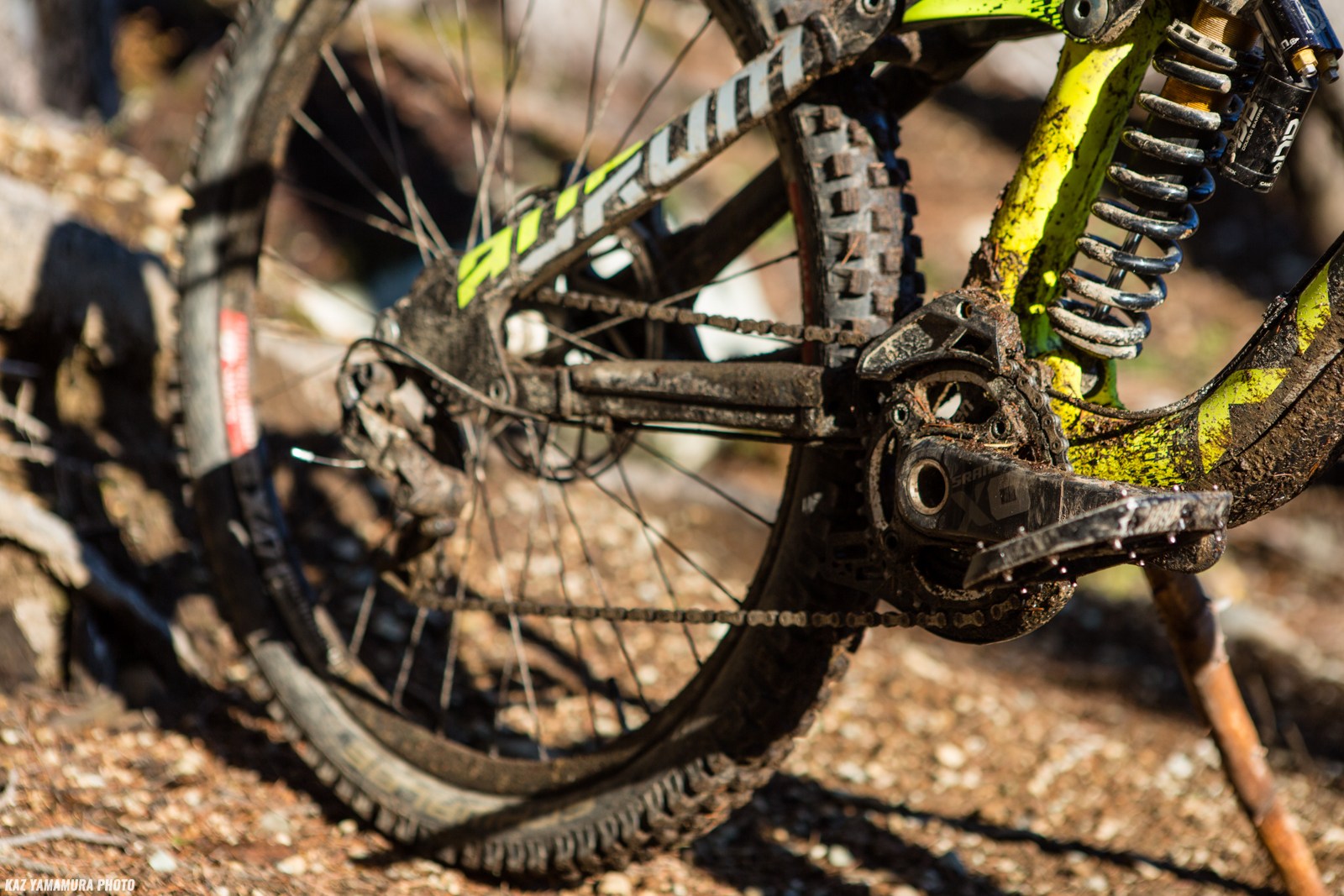 At the other end of the bike the RockShox BoXXer World Cup fork was easily tuned and provided lots of traction. The rest of the spec on this bike is absolutely spot on. The 7-speed SRAM drivetrain was crisp and simple and, to be honest, simply helped make the bike feel special and very much like it was intended for the purpose. The only little niggle would be with the stock Schwalbe Magic Mary tires that come in the Super Gravity casing, which while providing the tread pattern that’s great for a bike with this disposition and saved weight, they didn’t provide the flat free reliability of a set of DH casing tires. 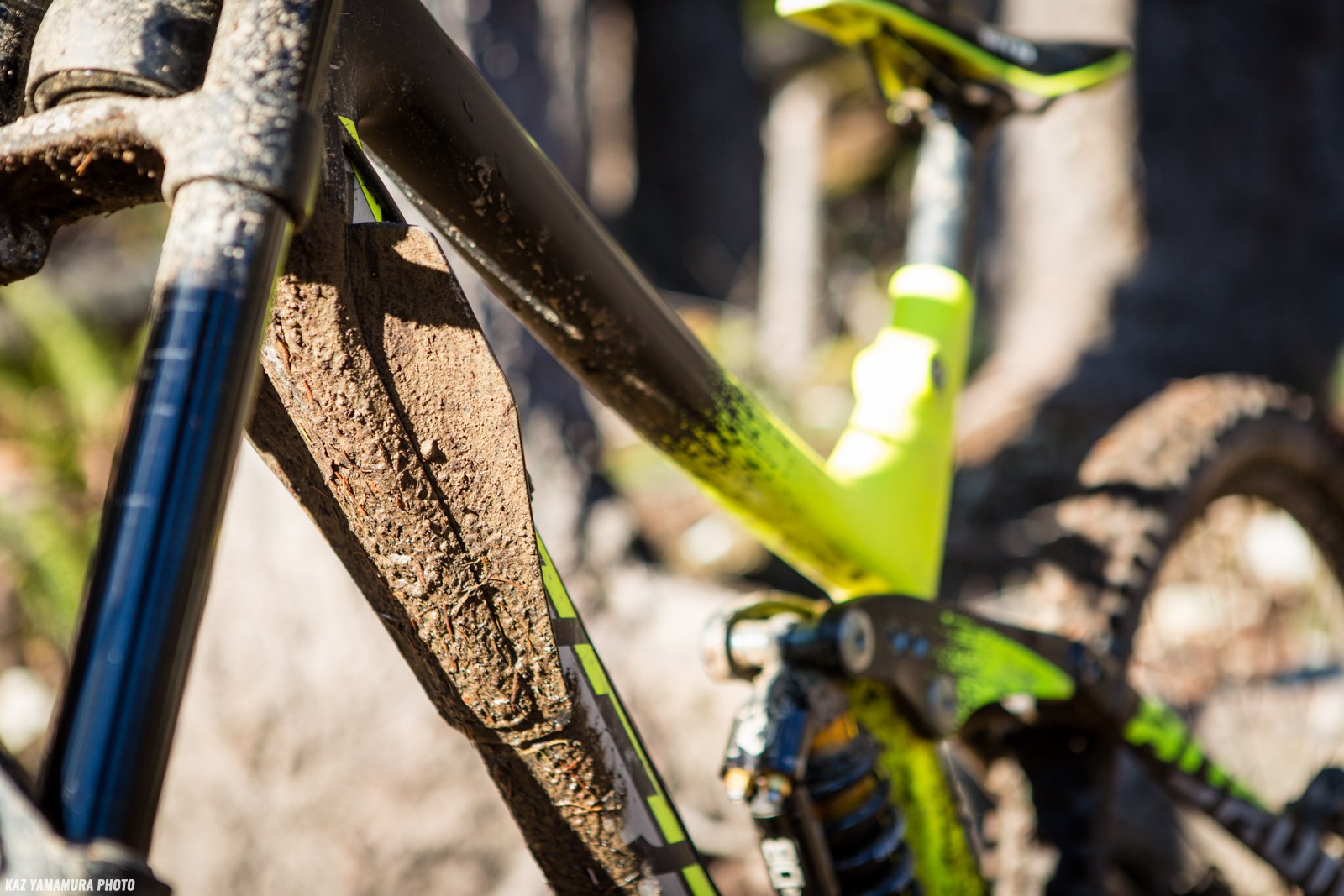 Beautiful bumpers, guides and fenders. Norco knocked the ball out of the park in terms of detail and frame finish.

The other finishes on the frame, like the bumpers, fenders and cable routing were exceptional. This is a bike that has been very carefully considered for real world applications. I truly, truly love the Aurum’s full complement of rubber frame features. The pads on the underside of the downtube provide protection while hanging the bike over a tailgate, as well as rock strikes. The cobra shaped fender is removable but I don’t see why anyone would get rid of it. And the cable routing is smart for its tidiness and preservation of delicate cables. Overall, it feels that every aspect of the frame has been very carefully considered. 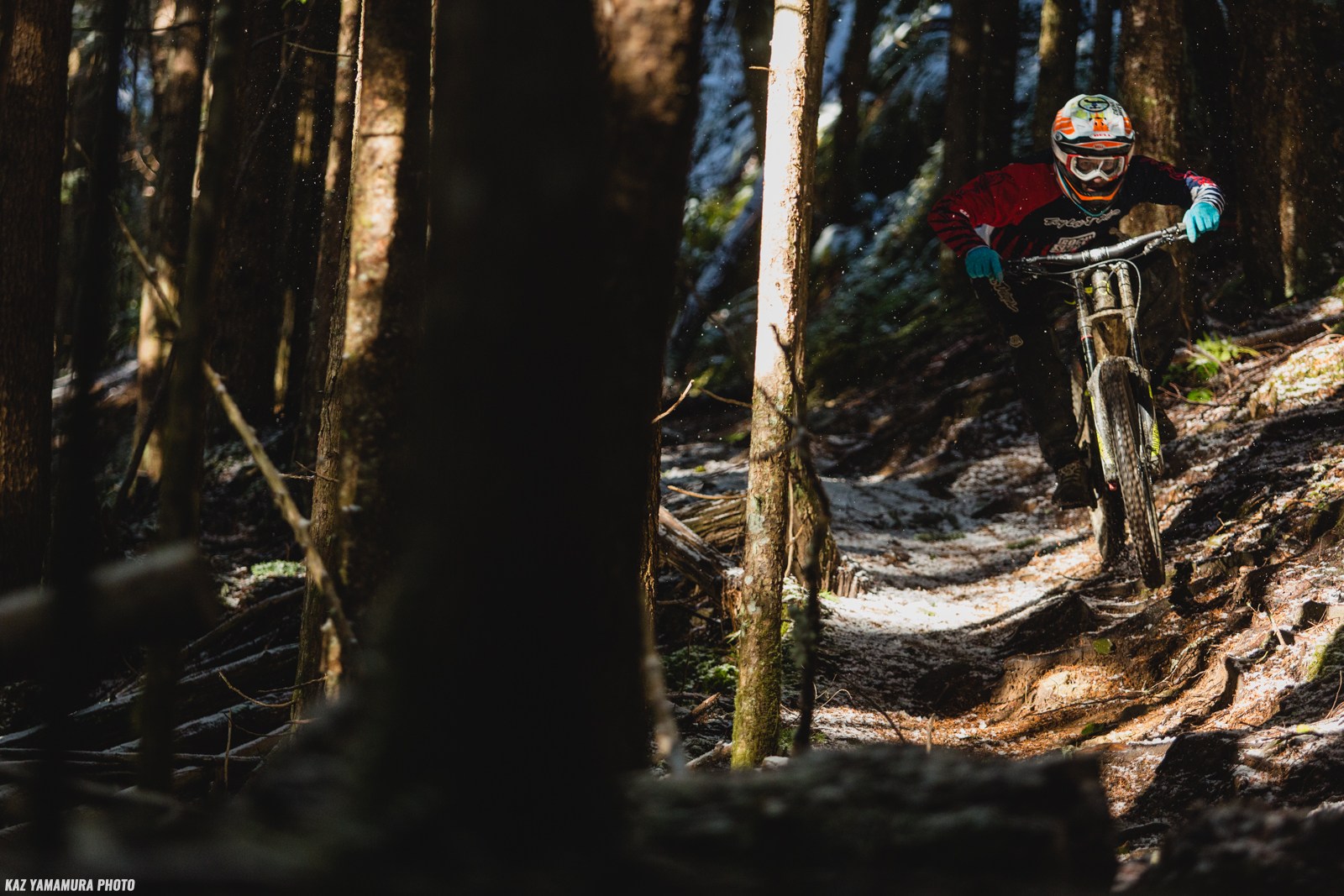 A very maneuverable and responsive chassis could perhaps be further unleashed with some more time spent experimenting with the rear shock.

So, where does this leave the Aurum? While I felt that the rear suspension performance only gave glimpses of the bike’s potential, I’d have to say that this bike is more than just a good looking machine. It’s a real contender when put among other top downhill bikes.

Does the Aurum C7.1 make you long for endless bike park days?

Good article Seb. If you're still riding the bike I'd love to share the shock settings I'm running and see how those work for you. Agreed that the Cane Creek offers loads of adjustability, and that can be both a blessing and a curse. I've been on the Double Barrel for a while and slowly worked towards a tune on both the DH and trail bike that works for me.

I concur. The Cane Creek shocks offer so much adjustment range, it's easy to tweak it the wrong way by accident. Writing down the settings and each change you make away from the standard tune can help considerably. I've got an OG Aurum with a CCDBAir, and it took me quite a while to dial things in, with many forays into "WTF? ****ing bike!". Now it feels great, and I can further adjust it as my riding style changes.