On September 22 2013, Canadian mountain bike legend Stevie Smith realized a seemingly impossible dream and took the UCI Downhill World Cup Overall title in Leogang, Austria. Today, 8 years on, Anthill Films is proud to announce a new documentary in partnership with the Stevie Smith Legacy Foundation about his contribution to the sport after his passing in 2016.

All proceeds of the film will go to the foundation to legacy Stevie's contribution of inspiring the next generation of Canadian riders. The World Premiere will screen November 5 in Stevie's hometown of Nanaimo, British Columbia. 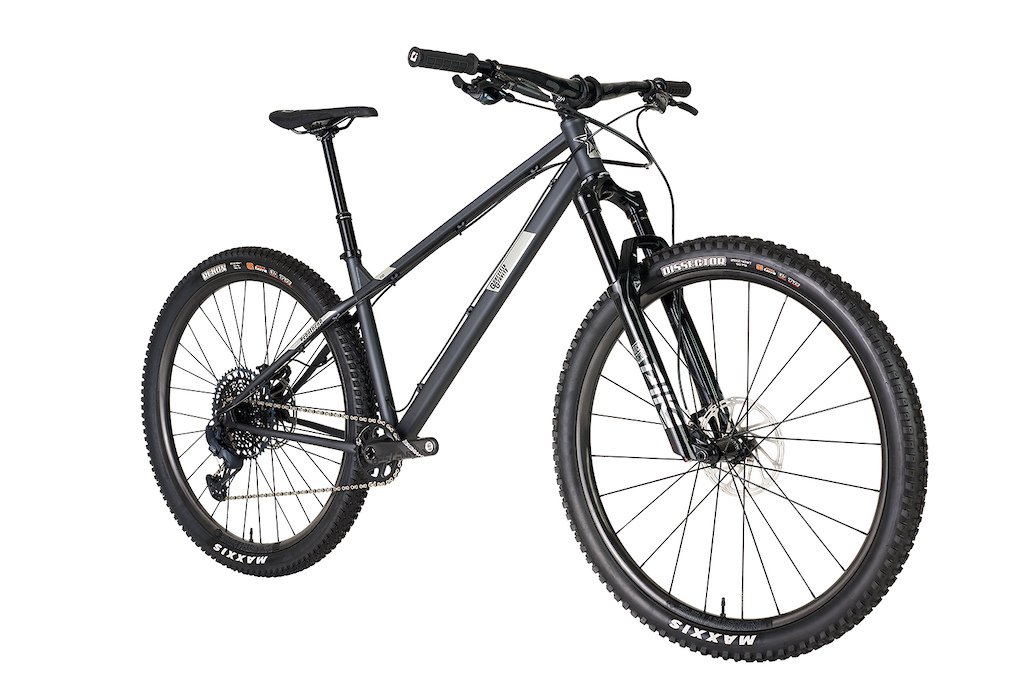 We are (finally) re-launching our beloved steel Pedalhead on a limited-release basis. Designed, engineered, and welded in-house, the updated Pedalhead maintains its spirit as the adventure hardtail.

This time around, it has some fresh tricks up its sleeve. Inspired by the modularity on our full suspension bikes, new swappable dropouts allow riders to switch between a geared and single-speed setup. Designed and engineered in house, this proprietary system allows you to seamlessly convert your geared bike into a single-speed rig.

The single-speed setup integrates a sliding system to provide chain tension. The mounts conveniently use a standard 12x148 boost rear wheel that holds the wheel in position when the axle is removed. When you take the wheel out to fix a flat or change the tire, you don’t have to reset the chain tension. This means less time fiddling with your bike, and more time riding it.

The refreshed custom steel tubing retains its unique square profile. The tubeset combines lateral frame stiffness for cornering and power transfer with vertical compliance to take the edge off of trail chatter.

The Pedalhead has the characteristic “GG-style” geometry that utilizes a roomy cockpit designed for short stems and wide bars. Combined with a slack head tube angle, low bottom bracket, and short chainstays, the Pedalhead is built for having fun and goin’ fast no matter where you find yourself.

For geometry and build kits, head over to the Guerrilla Gravity website. 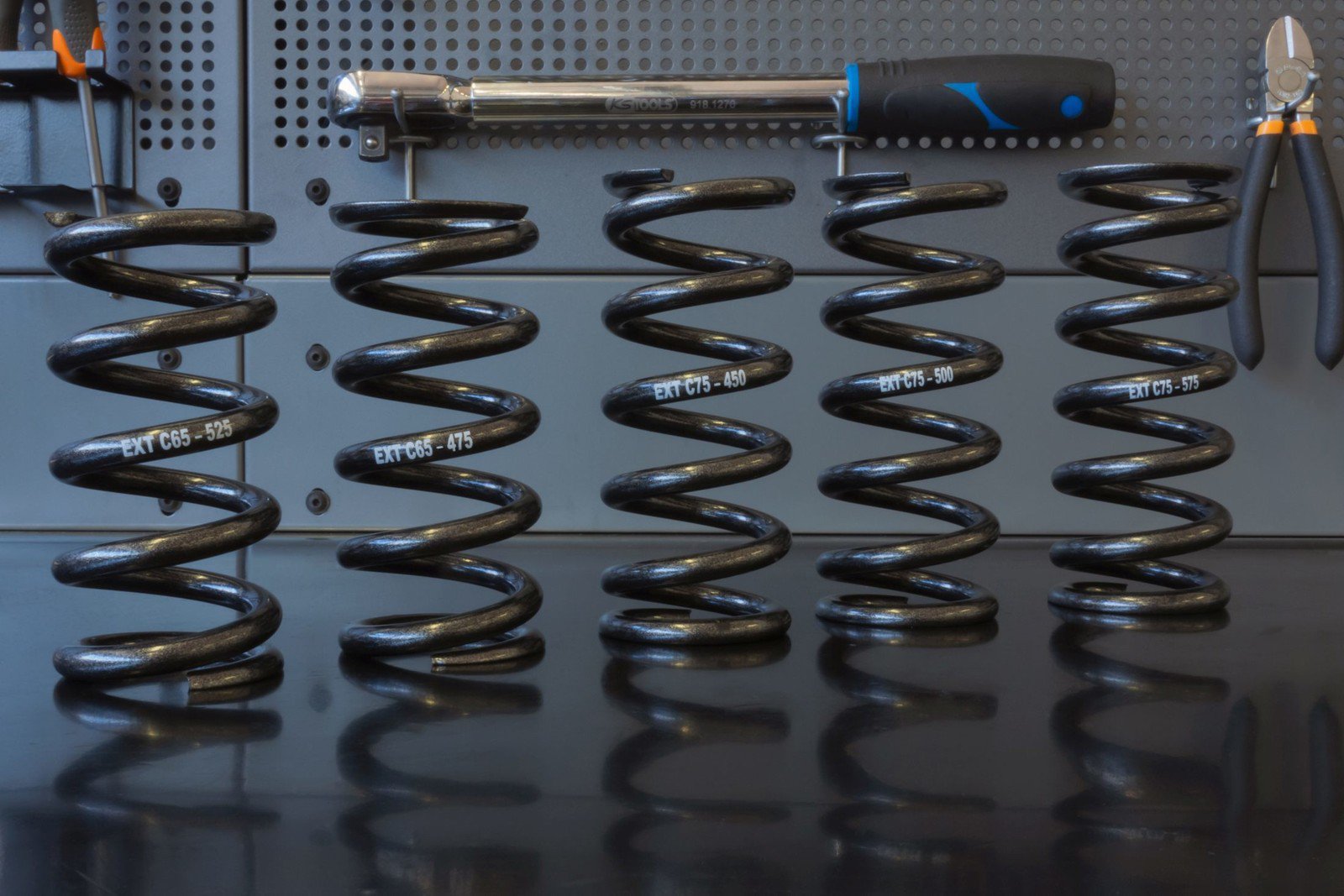 First to introduce Superlight springs in 2015, EXT is now redefining Superlight meaning introducing a new material that will make for a new state-of-the-art in spring design regarding both lightness and quality. This new generation of Superlight Spring features a weight reduction, depending on spring stiffness values and travel, of up to 30% compared with the previous EXT superlight generation and other competitor products.

Why Use Lighter Springs?

In modern MTB performance is key, and much of the research done in the last few years is oriented towards making high quality components while reducing weight. Every gram counts, that’s why we developed Ext Superlight V2 Springs, to assure you the same performance as your favorite coil springs without having to come to terms with weight.

Safety is one of the key values of EXT, our products are tested under extreme conditions to guarantee you the ability to ride at your full potential without worrying about failures. EXT Superlight V2 Springs are no different, while being lighter they aren’t by any means less solid and have been tested to give you the best performance and safety.

EXT Superlight V2 Springs are carefully calculated to the minimum length for the stroke required, this means that your spring will totally cover the shock stroke, but will also have a lighter weight. EXT Springs are developed for a long time use, thanks to improved mechanical characteristics and its material directly derived from motorsport. We offer a rate increase by 25lb to fine tune your MTB. EXT Superlight V2 Springs do not need any preload (maximum 2mm preload) allowing you the best feeling of coil shock. The use of springs with K over 600 require dedicated spring hardware/adapter.

For more information head to www.extremeshox.com. 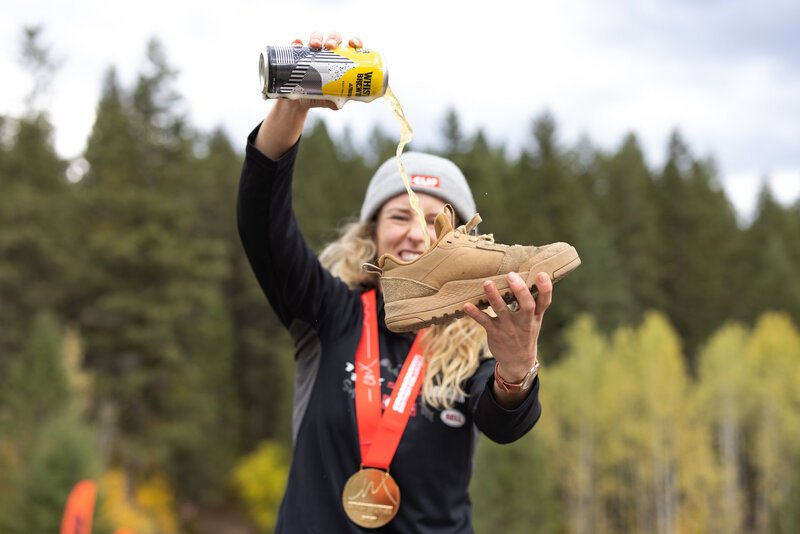 Brown and Breeden Take the Win At Mt. 7 Psychosis

Riders new to its hallowed ground, keen to test their mettle. Repeat racers, hungry for more. Redemption-seekers, looking to take back what Mt7 took from them. And local shredders, stoked to get amongst the action and share their epic backyard with the best in the world. This morning, they all stood shoulder-to-shoulder at the top of the Mt7 in Golden, B.C., peering down the steep chute that would be the beginning of their 1200 vertical meter, 7.3 kilometer, 11 and a half minute+ race run.

Clocking the fastest times of the day, Joe Breeden (GBR) who’s winning run was only his third ever down the track, and Casey Brown (CAN), who earns her first Psychosis win after finishing third last year. The Canadian’s time of 15:01.55 bested the field of nine women.

“I had fun today,” she added, despite the fact that after crossing the finish line she said: “My mouth is like an air pipe right now” and later said her insides felt like they were vibrating. “I really enjoyed practicing with all the other girls and showing the girls that haven’t ridden it before where to go. Trying to help as many chicks as I can that are having their first experience with it because it was quite scary the first time, I know that for sure.”

Mt. 7 Psychosis ran for 10 years, starting in 1999. The storied race crowned champions like Stevie Smith and Sam Hill. In 2020, after a 12 year hiatus, it was resurrected during the CLIF Crankworx Summer Series.

The winners that year, Henry Fitzgerald (CAN) and Andreane Lanthier-Nadeau (CAN) both continue to hold the course records for this race with their respective times of 11:19.19 and 14:32.69. 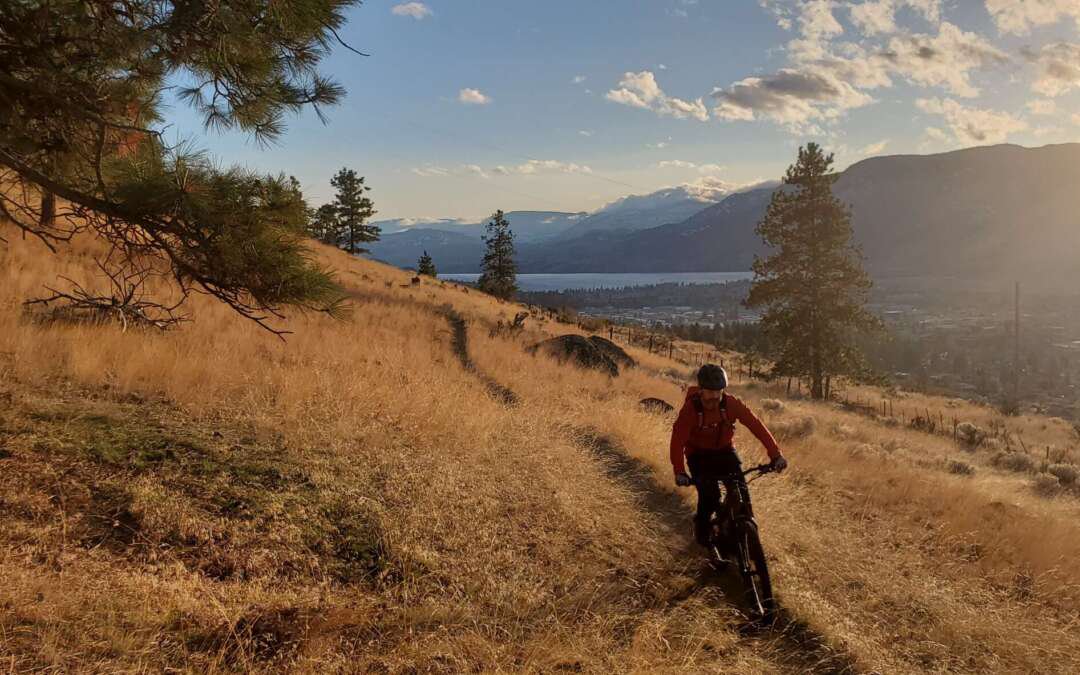 BC Bike Race Heads to the Okanagan

Heading in to the interior of British Columbia for the first time, the BC Bike Race has adopted a new "cloverleaf" race format for the 6-day 7-stage event in Pencticton, BC. This means reduced transfers for riders between stages, and the opportunity to spend more time exploring the local scene while sampling the best XC the Okanagan has to offer,

Organizers are excited to see the race return in 2021 after having to cancel the 2020 edition due to COVID-19, along with several date and venue changes earlier this year.

Our own Pete Roggeman will be competing this year, and you can check out how he's set up his race-ready Santa Cruz Blur here. Stay tuned on the site from October 2nd to 8th for all the updates from the course. 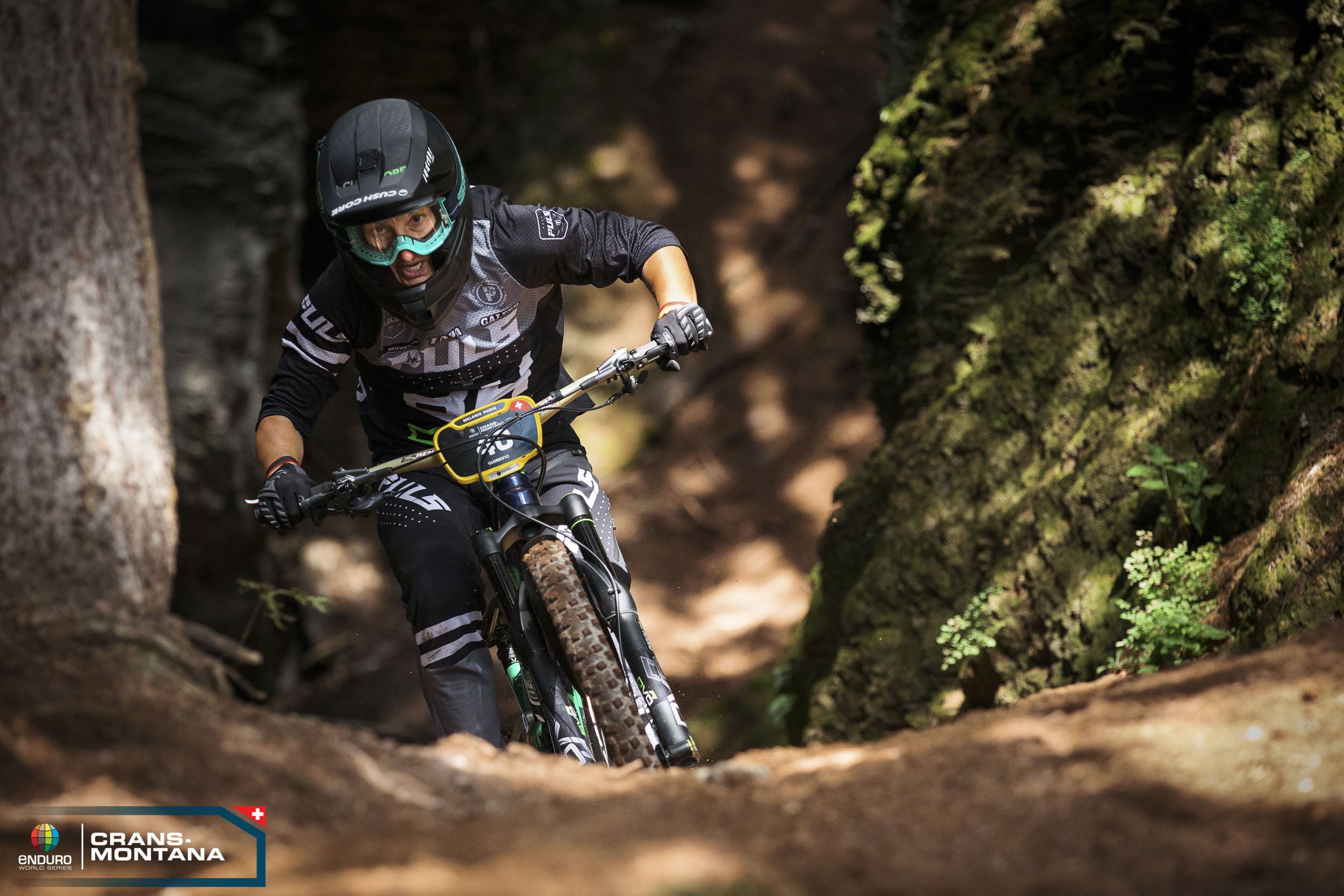 Both the EWS and EWS-E will finish their seasons in this most iconic of locations, an area steeped in racing history and home to some of the UK’s most famous trails. In stark contrast to Finale’s dry conditions and rocky trails, the final races of the season will play out amongst the tight turns, slick roots and steep forests of Innerleithen.

The EWS-E riders are the first to take to the start line on Thursday, when they will race a huge three loop course that incorporates 14 stages, 56.7km of pedaling and an epic 3450m of climbing.

Laura Charles (Orbea Fox Enduro Team) and Nico Vouilloz (Lapierre Overvolt Team) have won both EWS-E races so far this season, and will start the race as favourites once again. However, they face stiff competition from the likes of Tracy Moseley, Jared Graves (Yeti/One Up Pro Team) and Vouilloz’s teammate Kevin Marry. There’s some leftfield competition in the form of Sam Hill (Team Chain Reaction Cycles) and former UCI Downhill World Champion Reece Wilson, both of whom make their EWS-E debut this week.

On Saturday the ninth and final round of the EWS gets underway with the all important Pro Stage. This will be followed by five more stages on Sunday, with racers taking on 1860 metres of climbing and a course that covers 37km - with the stages accounting for over 10km of that.

In the men’s competition the stakes have never been higher as Richie Rude (Yeti/Fox Factory Team) and Jack Moir (Canyon Collective) go head to head for one last time. Moir leads the championship by just 70 points - a margin so small it means every single point counts and the 2021 championship is unlikely to be decided before the final stage of the final race of the year. The race for third will also be decided in the Tweed Valley - with Jesse Melamed (Rocky Mountain Race Face Team) leading Specialized Racing’s Kevin Miquel by just 45 points.

Melanie Pugin tops the women’s rankings with a commanding lead, but chasing her down will be fellow Frenchwomen Morgane Charre (Pivot Factory Racing) and Isabeau Courdurier (Lapierre Zipp Collective) who lay second and third respectively. However, there’s plenty of local talent ready to disrupt an all French podium; Harriet Harnden (Trek Factory Racing), Katy Winton and Bex Baraona (Ibis Enduro Team) will all be looking to turn on the speed for their home crowd for the first UK EWS in six years.

This week’s races form part of a wider festival that will see out the 2021 season in style, with an event village that features EWS Kids racing, the Drop and Roll Tour with Danny MacAskill, a film night, coaching sessions and ride outs.

More information about this week’s event can be found here.