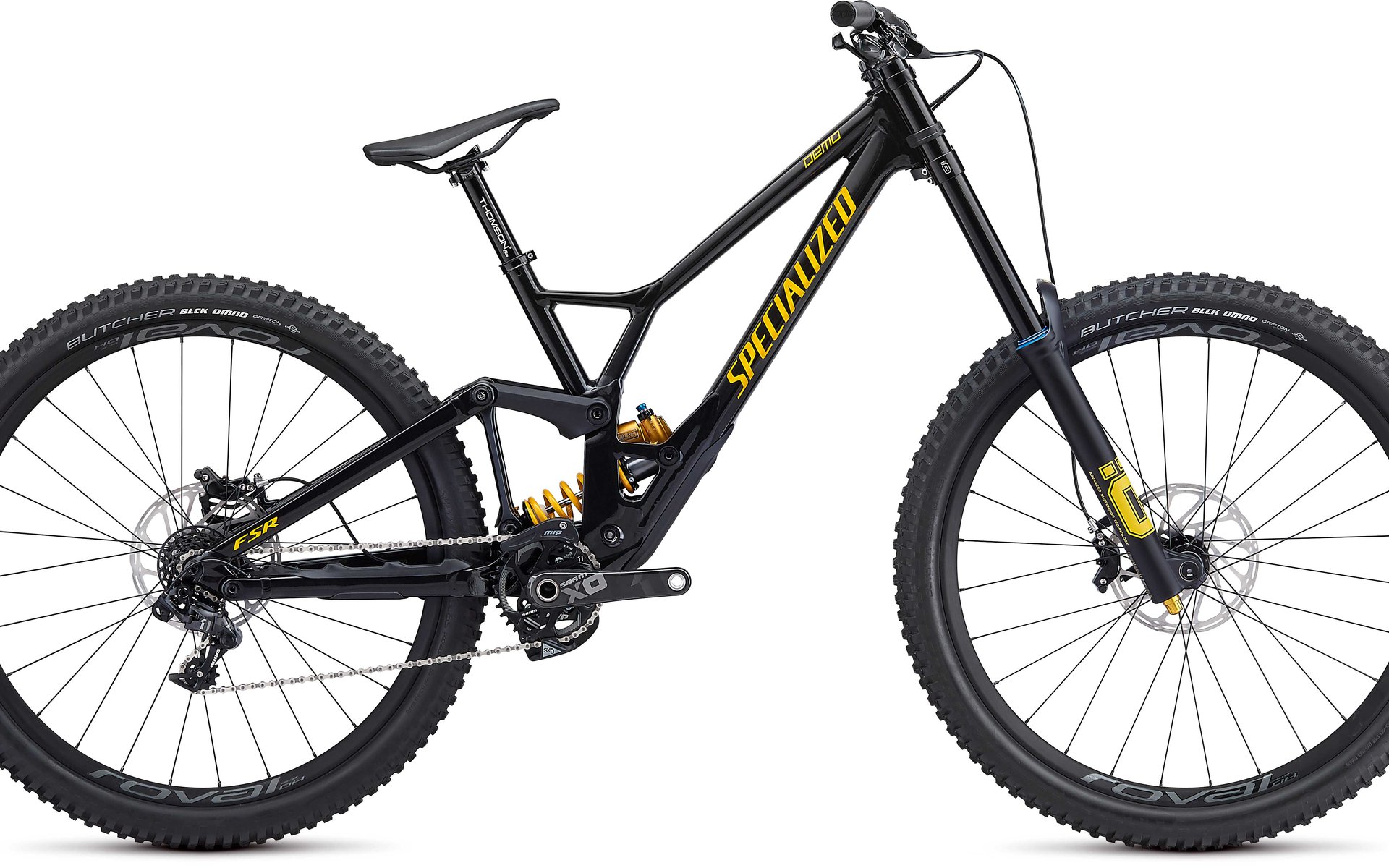 Specialized are today revealing the details of the new downhill bike that World Cup riders, Loïc Bruni and Finn Isles have been blazing on this season. The new bike won it's very first outing in Maribor and Loïc has since secured three victories aboard it. But this release isn't quite the hybrid setup that Loïc and Finn have been riding, this is a 29-inch front and rear wheel affair. Why?

Specialized were quick to answer such questions with the below:

"When we developed the new Demo, the UCI rules required that riders race on equal-sized wheels. Because, you know, UCI… That wheel size ruling changed recently and, as a result, you’re seeing teams (including our own) experiment with different wheel size combinations on different tracks. You can get farther off the back on really steep tracks with a smaller rear wheel. You can get less hang up over fast, open, and rough sections with bigger wheels." – Specialized Bicycles

At this point in time, Specialized don't have a plan to release a hybrid wheel option for the general public. They say that their goal was to develop the fastest bike possible and that meant to go 29 originally. They also mention that the Demo is always evolving, so we'll see what the future holds. We'll have more on the wheelsize thing and the new bike in the near future. But for now, let's dig into the new Demo 29 release. 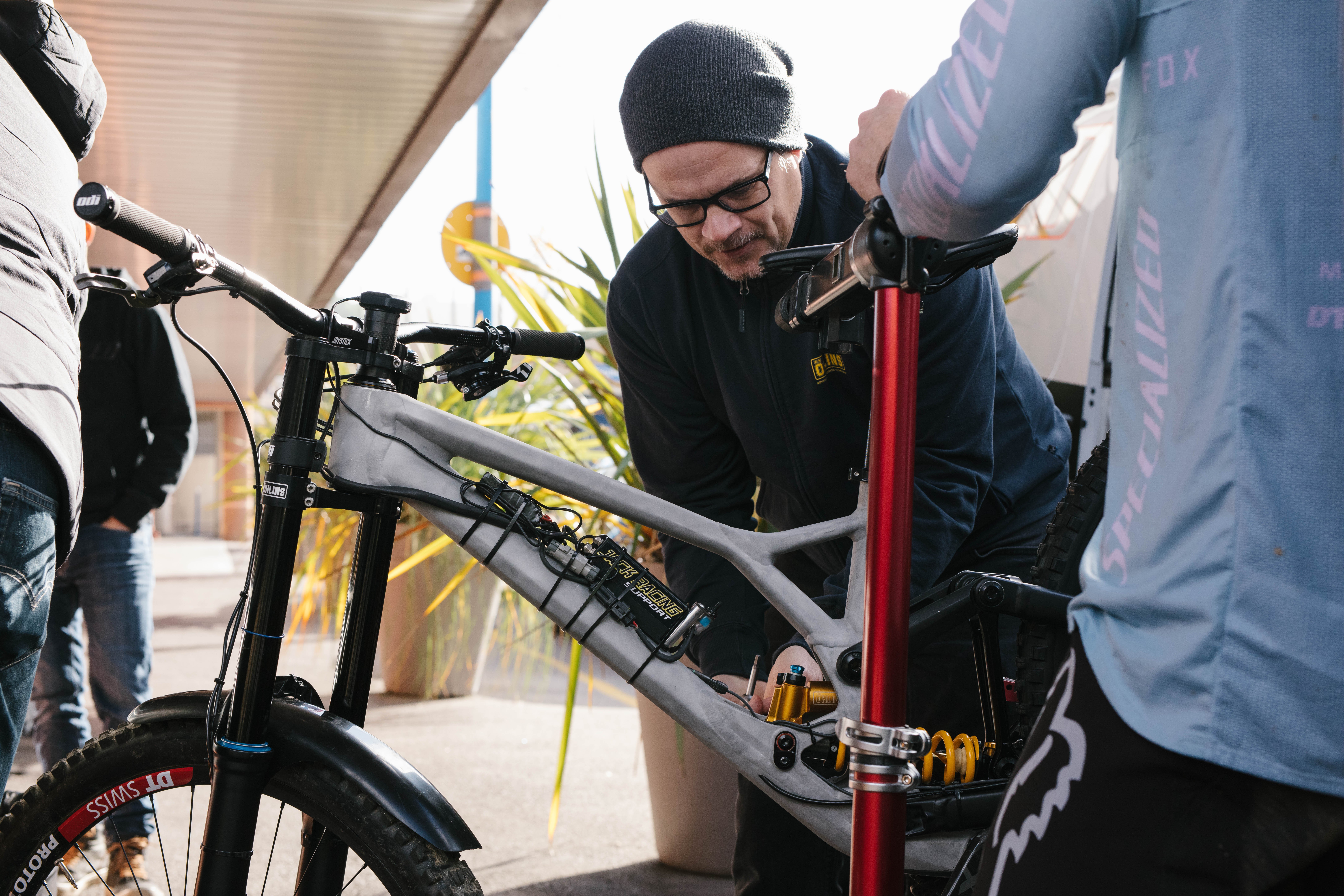 Suspension testing on an early Demo 29.

At the heart of the new Specialized Demo 29 remains the FSR—or Horst Link—suspension design. But Specialized claim to have changed it up quite a lot since the previous incarnation. While the previous model provided loads of comfort the engineers, working alongside the Specialized Gravity Team, have made changes to the anti-rise, leverage curve, and wheel path. They've also placed the suspension as low and far forward in the bike as possible to improve stability at speed.

The new Demo also removes the shock attachment to the upper link, which Specialized claim has allowed them to isolate the shock from side-loads. This will also reduce wear on the shock while improving performance. 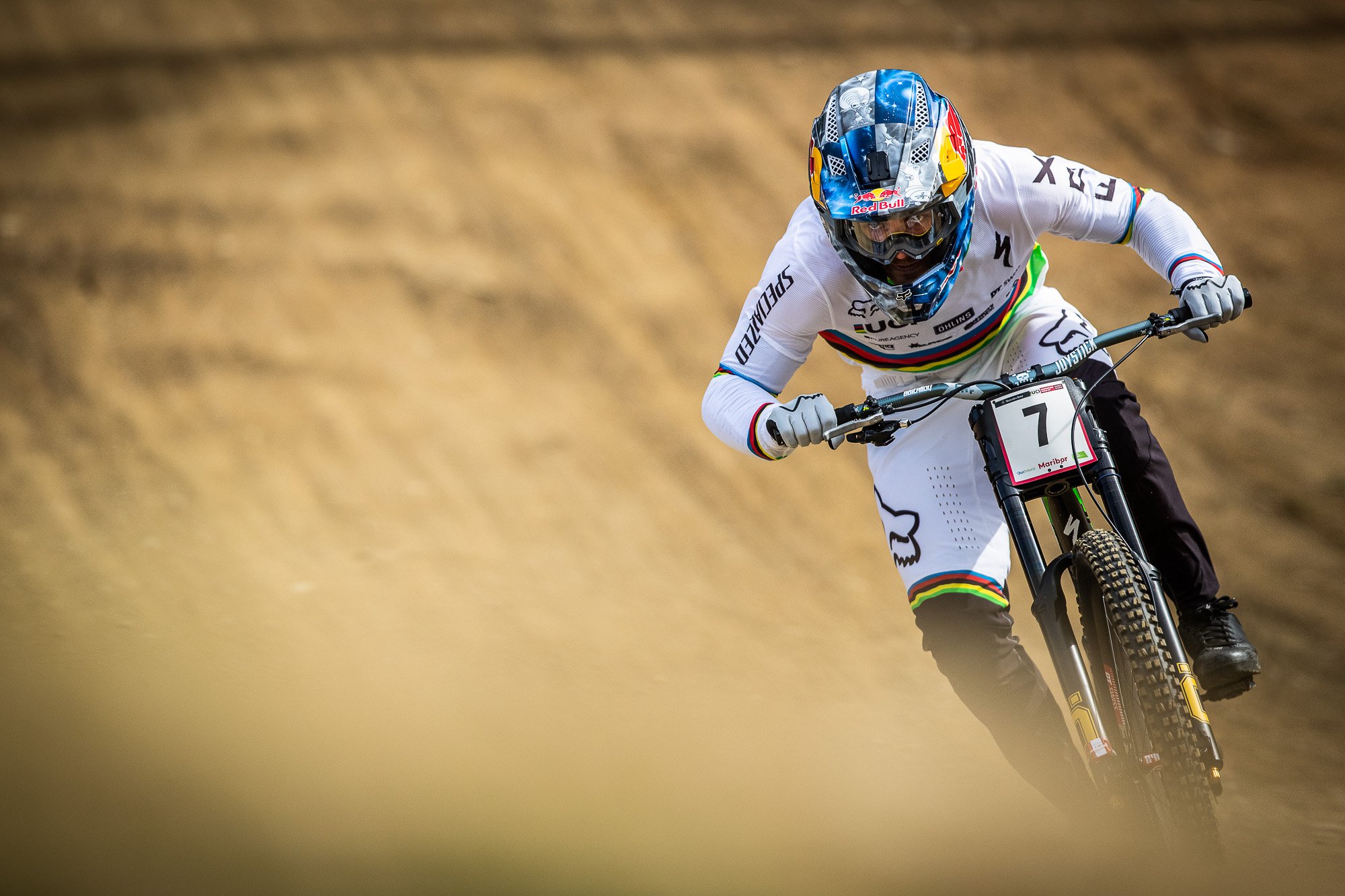 Loïc Bruni and the team have played an integral part in the development of the new bike.

When redesigning the Demo, Specialized wanted to decrease the amount of momentum sucked from a rider in choppy, square edge hits. A bike that more effortlessly moves across this type of hit is generally going to be faster and when it's a World Cup DH bike, every millisecond counts.

To do this Specialized have increased the rearward wheel path over the previous Demo. The rearward portion of wheel path on the previous Demo was short lived but on the new bike it follows a smoother, longer path. They limited it from going too haywire though, noting that while doing so could smooth out more of the trail, the increased chain growth introduces excessive amounts of pedal feedback. Yes, they could have made it more rearward and employed technology like an idler but the downsides weren't something Specialized wanted to bring into play. Those negatives include extra friction in the drivetrain.

Achieving the more rearward wheel path on the new bike also meant a complete overhaul of the suspension design. The new main pivot placement was the primary contributor to achieving the characteristics they were after. 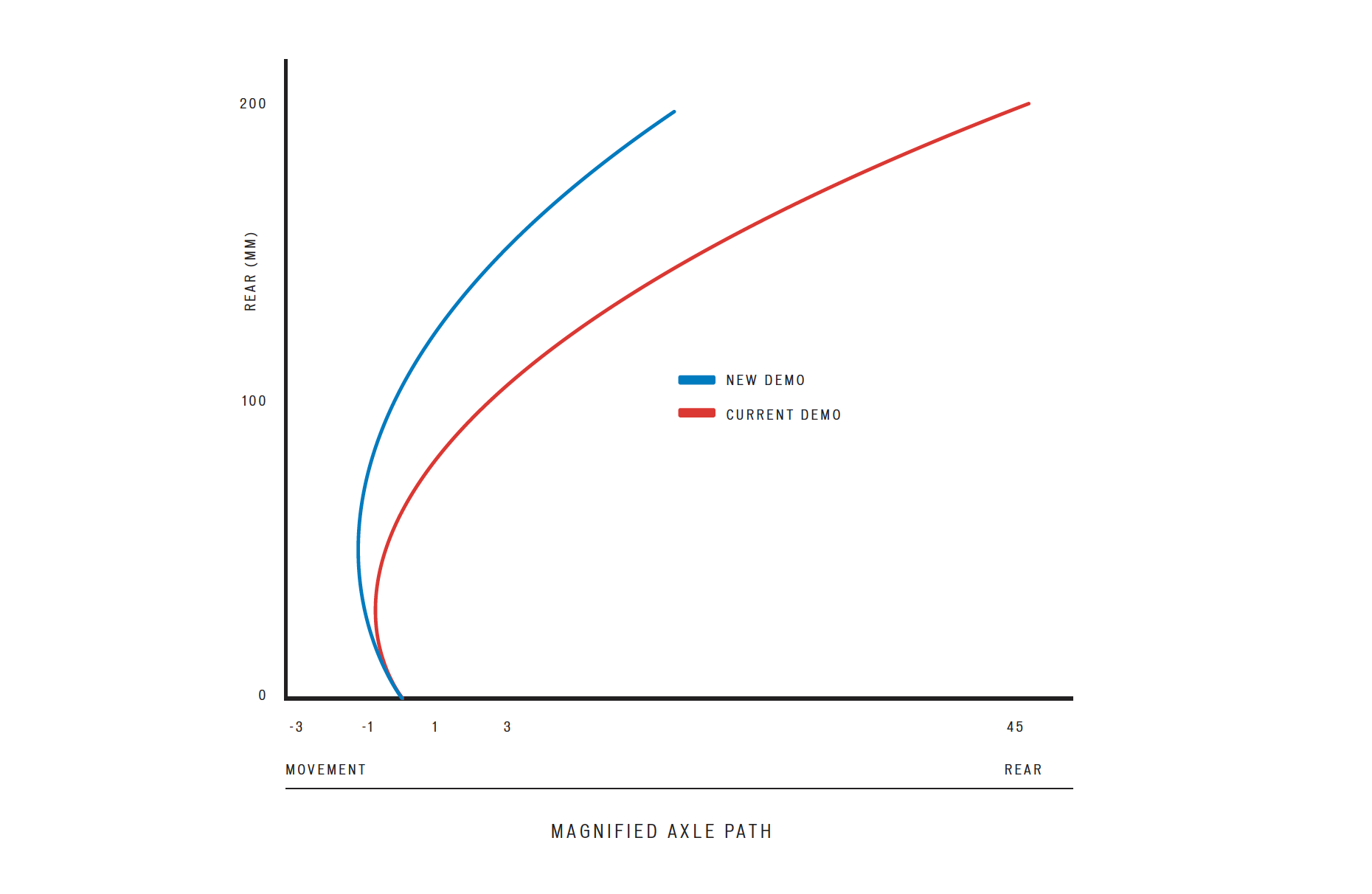 The Demo 29 (blue) clearly has a rearward axle path for a longer duration of wheel travel. 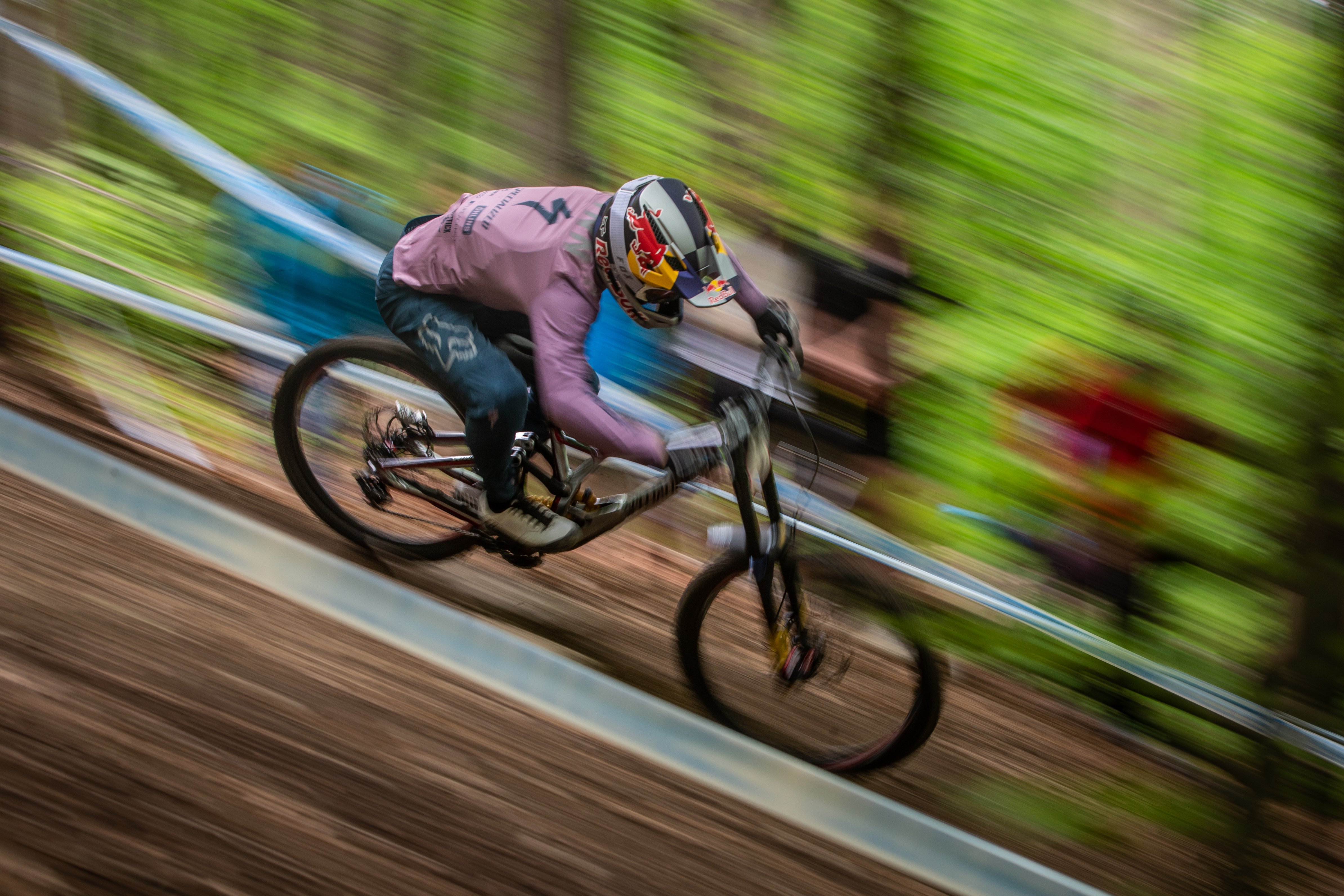 Not hanging up on obstacles means moar speed.

Anti-rise effects how much, or little, the bike stands up under breaking. It's often thought that more anti-rise is better because the bike can sit into the suspension in opposition to the rider mass being thrown forward when the anchors are dropped. But this can also introduce issues with traction. Specialized claim to have built "just the right amount" of anti-rise into the new Demo 29, improving handling and making it more predictable.

Compared to the previous Demo, just the right amount added up to an increase of 70%. Specialized are candid in what they've learned from the previous Demo to this new one and anti-rise was one element. They like how sensitive the rear was under braking with the previous but confess that it had a tendency to pitch riders forward under braking. On the new bike the team were looking for more balance under braking and adjusting the anti-rise, Specialized say, allowed them to achieve this. They feel there's less need for a rider to shift their weight back against the forces generated from dropping anchor. 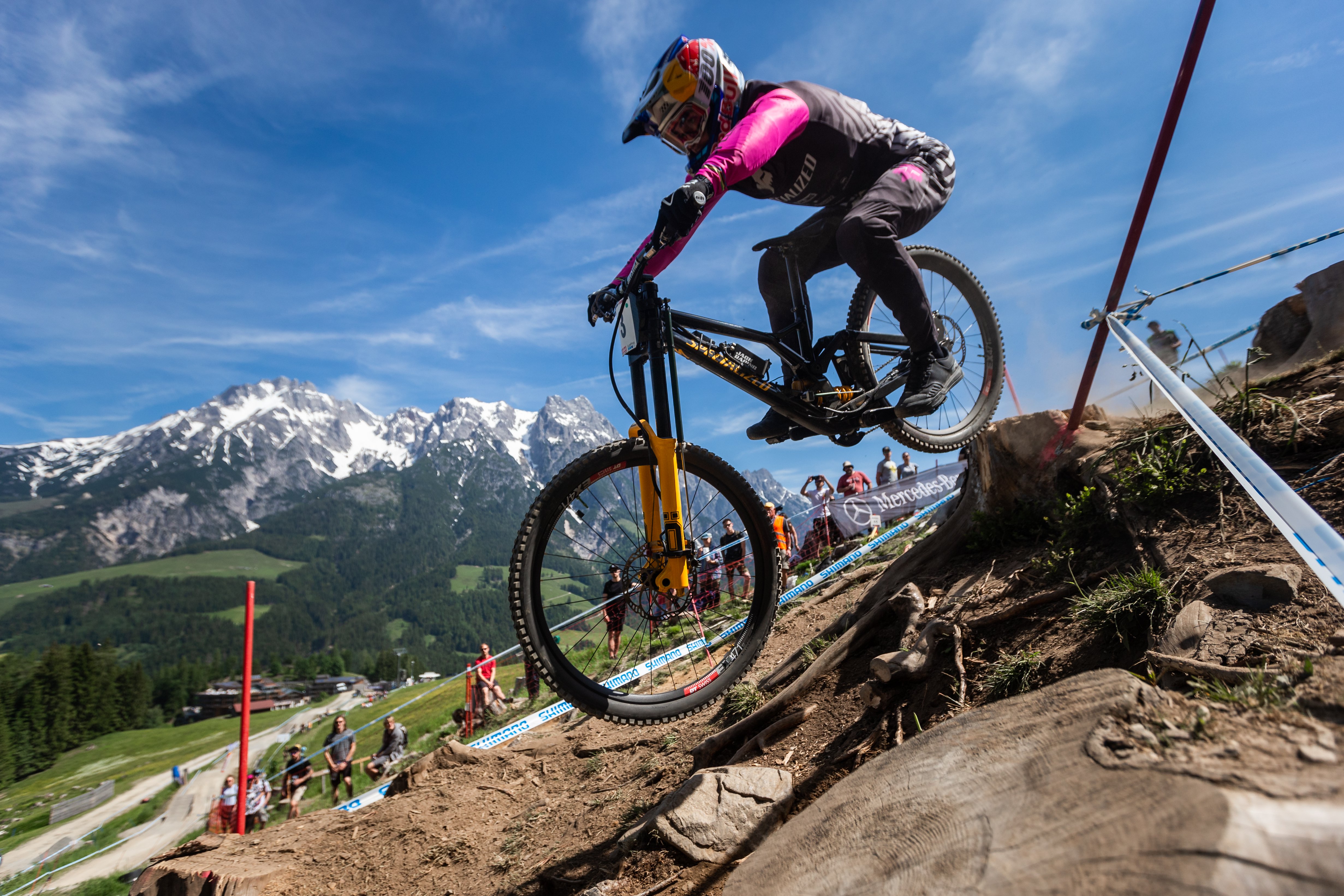 The bike has been, and will continue to be, tested at the highest level of the sport by Loïc Bruni and Finn Isles.

The new Demo 29 also features greater anti-squat than its predecessor. Specialized state that it's not something they went after specifically. Rather, it was an attribute that came from the changes to the instant centre, more rearward axle path, and chain forces. Between the new Demo and the previous model, the anti-squat values have changed a claimed 300%.

Finally, the Demo 29 features a more progressive leverage curve than the Demo 8. Specialized have been working on this element with the team since Aaron Gwin and while at the time the changes were said to be specific to the racers, consumers are now getting access to them. With the increased leverage curve comes improved control at the bottom end of the stroke and the bike should be more capable of handling big hits. Looking at the chart below, it's quite a drastic change and should be quickly noticed on the trail. 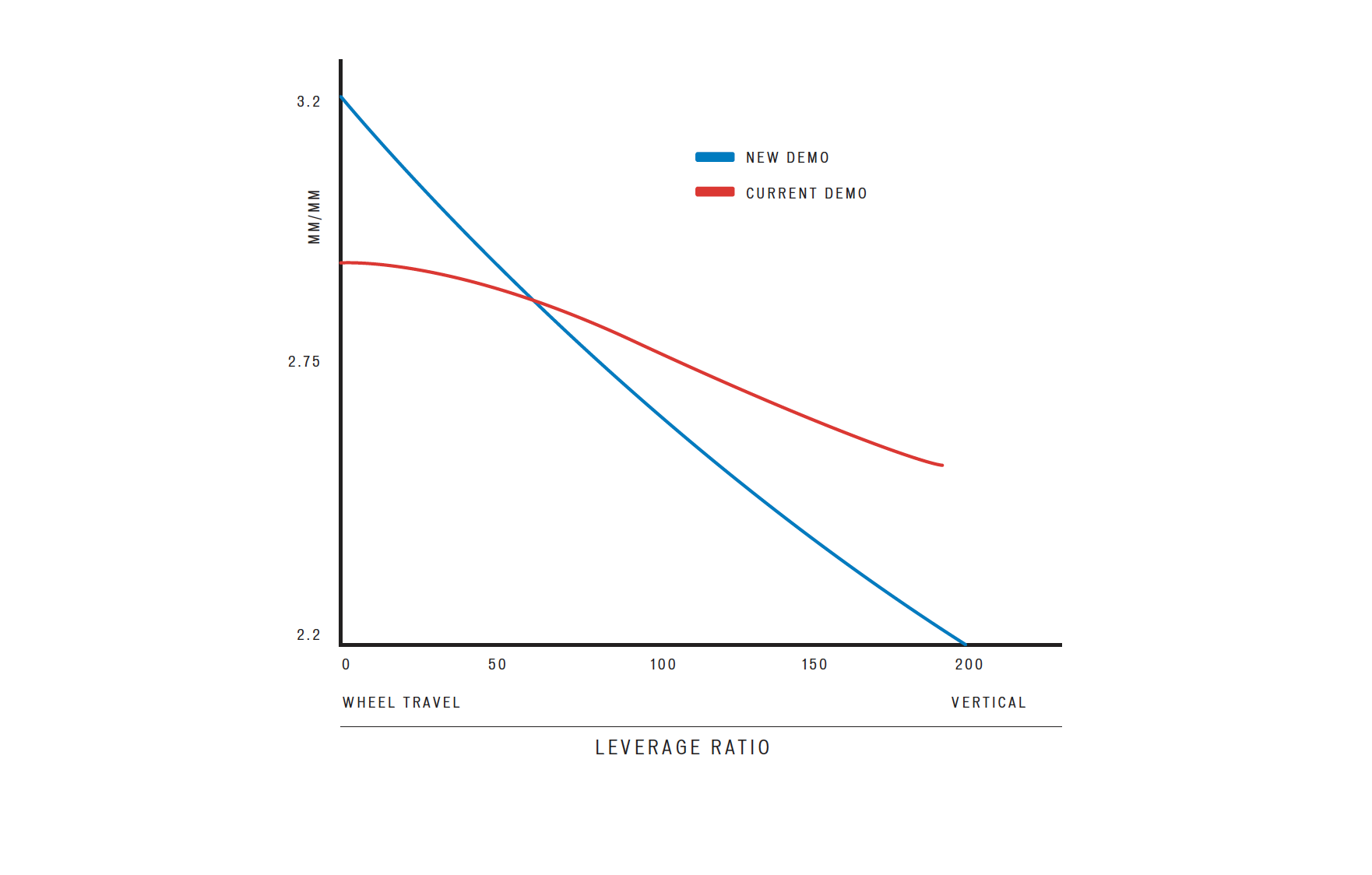 The new Demo 29 has a clearly more progressive leverage curve. The previous model was quite linear.

On paper the new Demo 29 is an interesting looking beast. Reach numbers are quite conservative with the largest of the sizes measuring 465mm and 20mm jumps between each of the three sizes. But where it gets really interesting is in the rear of the bike. The chainstay for the Demo 29 is claimed to be 450mm—the longest that comes to mind of the current crop of DH bikes. That long rear centre is going to place riders firmly in the middle of the wheelbase but where it's very interesting is in relation to the reach. Not many bikes go this long in the rear, let alone with relatively conservative reach measurements. We're also seeing 450mm rear centres across all three sizes…

Compared to the previous Demo, the bike only grew 5mm in reach but the rear grew a whopping 20mm. Stack height also grew a substantial amount, going from the Demo 8's 614mm to 630mm on the Demo 29. The headtube length remained within one millimetre of the previous model. Bottom bracket drop is a claimed 25mm.

Specialzed claim the changes were made to improve rider stability at high speeds. They also took into consideration how downhill tracks have evolved around the world when considering the changes. The fork offset was also tested extensively and the team settled on 58mm for the best balance of traction, control, and comfort. 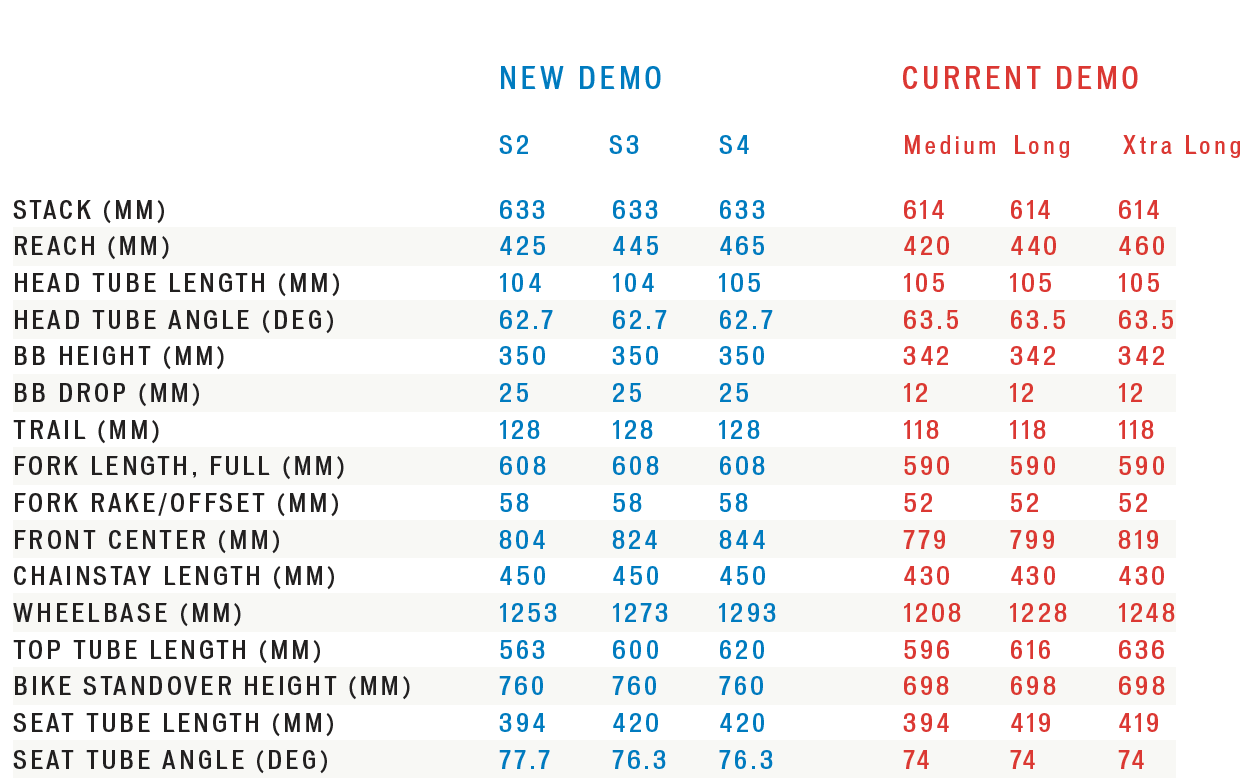 2020 Specialized Demo 29 geometry against the Demo 8

Specialized aren't shy with their use of carbon to manufacture bikes but the Demo 29 will only be available in alloy for the time being. They claim this is due to the Demo constantly being under development and using aluminum allows them to more efficiently make changes for the team. Does it mean there won't be a carbon Demo 29 in the future? We'll have to wait and see.

There will be two models of Demo 29 available and a frame only option as well. Pricing for the bike will range from 5,000–6,500 USD and the frame only will cost 2,500 USD. The Demo 8 will live on for the 27.5-inch wheel riders out there but will only be available as in alloy as well.

For more on the new Specialized Demo 29 head to their website.