Wet ass while riding? Not great, but a reality. Rear fenders? Not many options, and they’re often jerry rigged and, well… ugly.

Mudhugger is a small outfit out of Britain producing sturdy front and rear fenders for mountain bikes. The location is key: the Brits are notorious for wanting to pedal year-round, and it rains all winter just like here on the coast of BC. Thus, Mudhugger is not the first company in Britain to produce fenders (or mudguards as they like to call them) for bikes, but they are doing something a bit different. 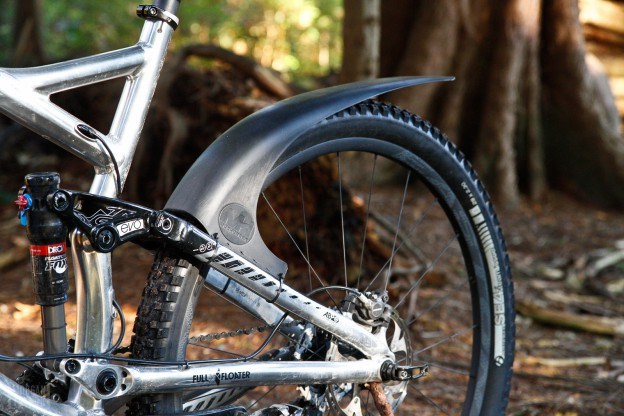 The rear Mudhugger is a big and solid piece of plastic with a trials moto look – and I might even say not that bad looking.

At first glance you’ll get a trials motorcycle feel from the shape of the fenders. Both front and rear pieces follow the curve of the wheel and actually complement the existing shapes on a bike. I feel like this is an important point, as the aesthetic problems created with fenders – especially rear ones – are part of what keeps people from trying them. 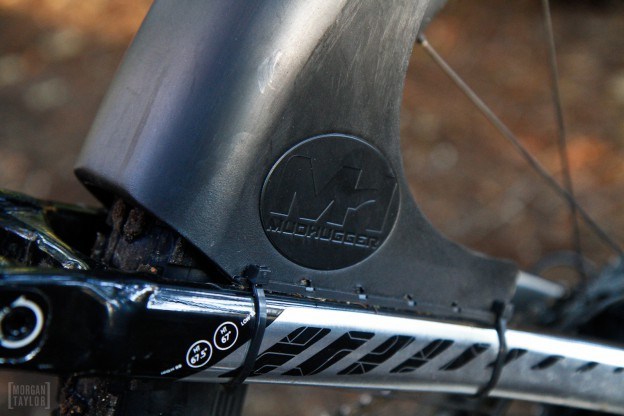 Mudhugger supplies an ample amount of clear protective tape for your frame and a pile of zipties to attach the fender through any of twelve holes.

On the functional side of things, the Mudhuggers are sturdier than other fenders on the market, of course at the cost of weight. Up front the difference is negligible: the front piece weighs 75 grams, which is about 50g more than the foldable fenders that fit in the same space. Out back the rear Mudhugger weighs 220 grams – almost half a pound, which is around the same weight as a seatpost clip on or DIY rear fender. 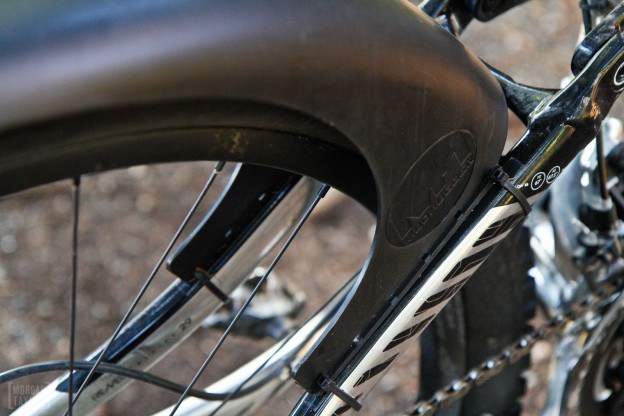 The plastic is relatively thick, which makes for a sturdy piece of kit once tied on. Of course that sturdiness adds weight, but at 220 grams it’s not really any heavier than other rear fender options.

The front fender performs as expected. The most obvious test for front fender function is to ride on a wet road at speed – at night with a light on. The Mudhugger, as with other similar options, keeps spray down below your handlebars rather than letting it fly up into your eyes. Minimalist front fenders are basically a no-brainer for wet weather riding, so there isn’t much more to say here. 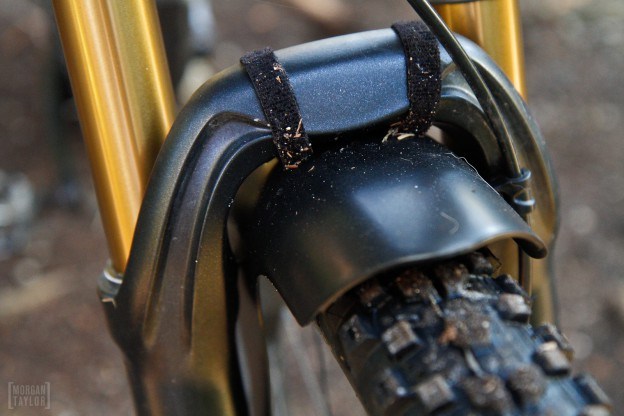 Rather than being a simple flat piece of plastic that bends into shape, the Mudhugger front fender is molded into a specific form. It’s not quite as thick as the rear fender, which brings the weight in at 75 grams – 50 grams more than other minimalist fork arch fenders.

The rear Mudhugger is currently meant for 26” and 27.5” wheels due to its length – you can install it on a 29er but you may not get full coverage. Of course, what did I do? I put it on a 29er. In light rain and wet road sections to the trail, I immediately noticed the rear fender doing its job. While a friend got a skunk stripe up his back before we’d even hit the trails, my backside remained dry all the way down the leg. The 29er problem doesn’t manifest as direct spray, but rather with a broad splatter of dirty water on your back. Definitely not enough to cause any sort of discomfort, and nothing on the saddle or legs. 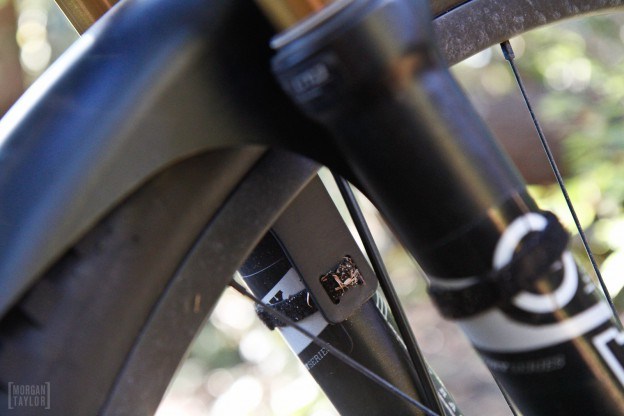 Attachment is with a supplied piece of velcro strapping. I was tempted to cut it into four even pieces, but realized the fork legs would need a bit more than the arch and I would run short if I did that. Ideally I would like to see another couple inches of strapping in the box.

In heavy rains, with lots of puddle smashing and waterlogged trails, I was able to overwhelm the Mudhugger. It should be noted that in testing these fenders I sought out riding in pissing rain conditions on all-weather trails and gravel paths that at times have full creek bed sections. Unless you keep your speed to a minimum, there’s really nothing a trail-worthy (read: sturdy and quiet) fender can do to keep you dry in such a torrent. 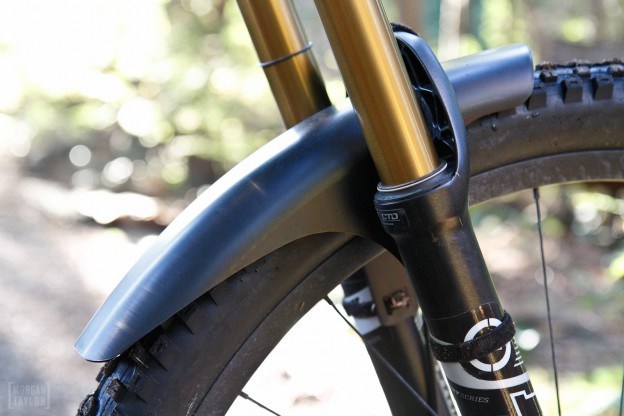 The front Mudhugger’s profile echoes that of the rear: the sturdy, thick plastic allows for a design that can follow the arc of the tire.

One thing that’s always bothered me about fenders on bikes is the noise they produce. Rattling and squeaking away, as Danielle Baker noted in a recent column, like “the sound of a dolphin trying to tell me that the answer is 42”. With the Mudhuggers, noise was not an issue whatsoever. I tried my best to get the rear fender to act up by installing only four (of a possible twelve) zipties and being not-so-careful with leaning it on trees and so on, but the Mudhugger stayed in exactly the place I installed it on the provided clear protective tape. 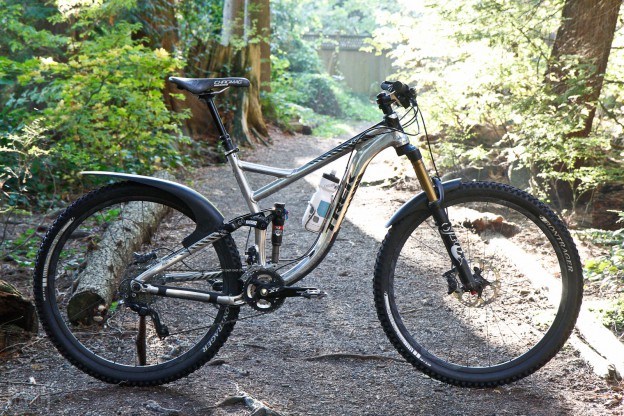 Front and rear Mudhugger fenders installed on a 29er. The rear fender is claimed to work only for 26″ and 27.5″ wheels, but I would still consider its performance acceptable on this bike. Your mileage may vary depending on chainstay angle.

The question of whether a rear fender is something you want on your bike is not one I can answer. I can say that the Mudhugger rear fender is a well-executed piece and I would choose it over seatpost clip-on version. While Mudhugger states the rear fender is designed for 26” and 27.5” wheels, you can get away with using it with 29” wheels – the angle of the seat stays will determine how much protection you get out of it. The front fender works similarly to existing pieces on the market but has a more streamlined shape and sturdier construction.

It’s great to see new options on the market and Mudhugger has done well with the first iteration of their fenders. At the moment you can purchase Mudhugger products directly through their website – for £39 a pair – though North American distribution is likely in the near future.

What are your thoughts on rear fenders? Commuter-nerdy, sensibly comfortable, or just not necessary?

Hi, I am the inventor and owner of Mudhugger. For the record, here in the UK a lot of people thought they would clog up with mud as well. I promise that we have never had a fender clog with mud in the last 12 months of use, I am not saying its impossible but we have yet to see it happen! We are also looking for a North American distributor pref BC.
Thanks for reading the article and a big thanks to NSMB, ride safe
Bruce

It's my washing machine that doesn't love the the skunk stripe of grit and mud, not good for the machine, and I can't say I've been overwhelmed by seat post mounted fenders/mudguards. I've yet to actually buy one, I just pick them out of the tree half way down a trail where some one has thrown it, after the 12th time it has come unstuck, twisted at right angles, or just generally become a nuisance-I believe fender hunting season has arrived, I expect to see my first one in the next few weeks I suspect.

The rear looks great, the front too short. At speed you're riding into the spray so the lower the better. Maybe if you supplemented it with the classic Forward Deflector Shield you'd be fine.

these things are excellent. i'm sure some of you have already seen my posts and pictures. i've added an additional 4″ flap to the rear guard and it does the job well keeping mud off my butt and my dropper seat post. i do find the rear a bit noisy when riding really rough terrain at speed as it flexes and bumps against the tire, but i don't really care. i've used all 12 zip ties and it's very very sturdy. if this is the price of a relatively clean ride, it's worth it.

I'm in the UK and bought a rear MH a few month ago. I ride a 26 Lapierre Zesty and the MH keeps the bike (seat-tube and seatpost) and the underside of the saddle completely clean. However, I get the skunk stripe starting on my shorts. I always use a rucksack and that gets covered, last ride to the extent that it had to go in the washing machine. I've never ridden in muddy conditions without the rucksack, so don't know how far up my back the mud would go without it.

I agree with the various points about how sturdy it is, but must say that I'm disappointed about the lack of coverage, particularly given that I'm on a 26. Maybe the Zesty is an unusual design? - although it doesn't look it to me compared with pictures of the MH mounted on other bikes.

Cunningstunts, I had already been thinking about extending mine on a DIY basis. How did you do yours?

Bruce, if you're reading this, I'd be interested to hear your thoughts too.

in a crash, are these going to crack like a helmet visor, or flex like a piece of tupperware?

Hi, They will bend a lot in a crash but the zip ties will snap in a big one, I just carry 6 spare ties in my backpack. Oftentimes just one or two break but a bad off on a big tabletop ripped the whole thing off, no damage to the fender just zipped it back on and carried on!

bahh,
Get that bike back to Garret asap.

Although this is an option, if your worried about wet, cold rear end, just buy some relativly cheap, thin water proof pants and cut them into shorts…then wear them under your winter riding gear so that they are not going to rip when you crash.

I have an older pair of thin water proof pants I used to use for Snowshoeing that I cut into undershorts, they work !

great to have more options and they look well thought out, but I couldn't see these working well where there's a lot of mud (especially sticky mud) as they'd jam very quickly. I bet they stay put better than my Crudcatchers do though 🙂

I like the contour of the front one way better than my MuckyNuts one.
The rear, like any rear fender, ain't sexy but it does look like an awesome option.