Why in the name of all that is holy, does my mtb fork require servicing every other time I turn around, but the fork on my dirtbike seems content — dare I say happy? — with an annual round of attention?!

I remember one time, way back when, tagging along with my roommate when he went to visit a friend.  That friend had a roommate who was the kind of person who, when you stood up to leave the room, would quietly move in behind you in order to straighten and fluff the cushions that you had been sitting on.  It really played on the psyche to have somebody that concerned with your impact on their belongings.

We had the opposite problem.  Our dining room was the bike storage area and I often used the kitchen for fork teardowns.  I had a pretty sweet system figured out.  I’d lay down newspaper, strip down to my underwear, and get to work.  This was the early days of Boxxers, so this was happening at least once every week or two.  Because of our bike maintenance requirements we ended up doing most of our socializing outside of our home.  Nobody ever came over, unless they needed help bleeding a disc brake.

So colour me surprised when one day, mid rebuild, the door opens, voices are heard and in walks the OCD psycho described above with my roommate in tow.  She stopped, took in my mostly naked body clutching a set of lowers, turned and walked out the door, never to be seen again (by me…not anything murdery).  I didn’t even have a chance to explain how much time my system saved on laundry.  I actually thought she might appreciate the ingenuity and potential for similar improvements to her own cleaning procedures.

It’s hard for anybody who didn’t ride a DH bike in this era to understand just how bad the bikes were in the ‘good old days.’  Any run that you finished without oil pouring down your lowers onto your disc brake was considered a success.  So, I disagree with the premise of your question.  Fork durability and maintenance requirements have made amazing progress.  Complaining about it seems petty and ignorant.

To prove my point, I’ve looked at the maintenance intervals for several popular manufacturers (Rock Shox, Fox, DVO and Suntour).  Assuming that you ride 6 hours per week (I’m pretty happy if I get in three x two hour rides each week), this breaks down as follows: 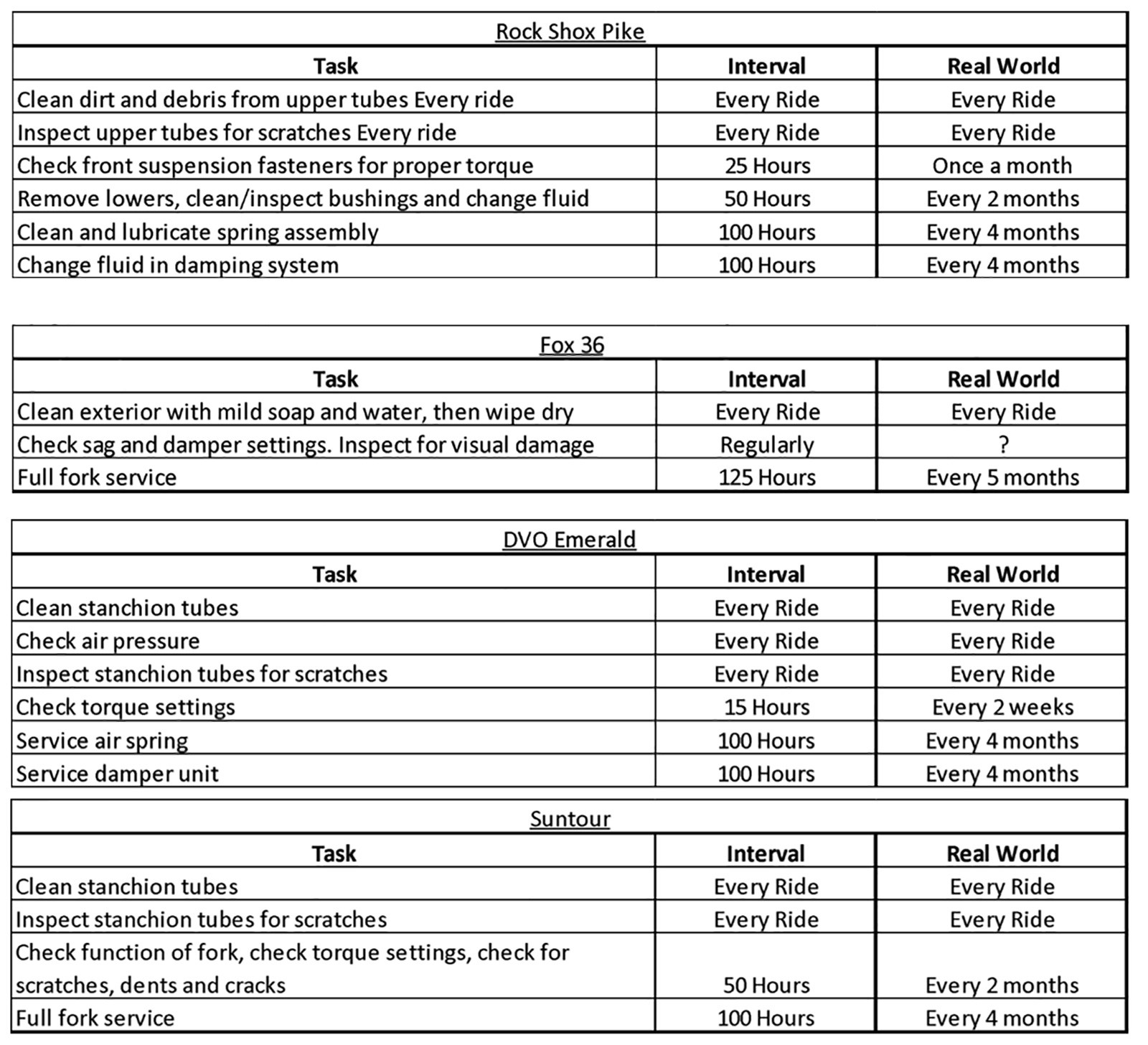 Conclusion #1 – Everybody loves a clean fork

Holy crap these guys are obsessed with cleaning stanchions.  Maybe there’s something to keeping your fork clean?

Based on reputation, I thought there was going to be a bit of a spread for maintenance requirements, but they’re all pretty similar.  Fox gives you an extra 25 hours before major work is required.  I did not expect that.

Conclusion #3 – They all want you to be sad

Check for stanchion scratches every ride?  Why?  So you can mourn your expensive mistake each and every time you ride your bike?

Conclusion #4 – Once or twice a year is probably fine

100 hours is a lot of riding time.  Most of us aren’t single, unemployed bike park assassins and will probably be okay with a yearly or twice yearly rebuild.

So, we’ve already proven that you’re full of shit.  But let’s take a look at the second part of your statement.  Dirt bikes.

I chose Honda because they seem to be the bikes for people that are scared of tools.  First up is the XR/CRF-F family.

Okay.  So that’s pretty good.  They don’t even suggest that you should ever even consider changing the oil.  No wonder owners of these bikes are convinced that they run on unicorns and rainbows.  Maybe there is nothing but industrial strength marshmallows inside of these forks?  Based on suspension performance, it is a possibility.

But let’s look at their motocross bike.  The CRF-R.  Things get pretty ugly here.

I don’t know what “replace fork oil damper” means, but it sure sounds expensive and time consuming.  And if you happen to be riding the performance equivalent of the modern mountain bike, you’re probably going to spend as much time working on it as you will riding it.

Just in case it isn’t reward enough to be called ignorant, petty and full of shit by Uncle Dave, here’s a prize for you: A pair of Race Face’s brand new Chester Pedals. With a nylon composite body, fully serviceable sealed bearing and bushing system and cromo axles, they look like a great place to put your feet. While riding. As long as you’re wearing shoes.

Got questions? Send them to Uncle Dave. Next week’s winner will get a custom NSMB.com-logo’ed Race Face Loam Ranger jacket. Available for order now in our online store.

Every 5 years hand the forks over to a bike shop.

Anyone who's complaining about today's forks probably didn't suffer through some of the early monstrosities. Today's forks are comparatively awesome. My current Rock Shox and Fox forks are happy with a good servicing once or twice a year which doesn't seem at all unreasonable.

Which is why I've always run coil Marzocchi forks. I ride a lot and can't stand forks that feel sticky. I've always done a yearly service on the forks, but only out of guilt for the horrible things I've done to them, not because of poor performance.

MX forks should be done every 10 hours to prevent requiring constant replacement of the bushings too. 20+ and you're gonna always be replacing the bushings. Also motos weigh 200+ pounds. THAT SAID, motorcycle forks last for 10-20 years without wearing out their coatings. Not like 2013 Fox forks, or 2014 Pikes, HA!

that's only for hardcore racing scenarios, or on older right side up style forks. Newer inverted MX forks have a couple of seals you need to get dirt past, and in my 6-7 years of racing its never been an issue. I would rebuild every 50-60hrs, not out of necessity, but out of preventative maintenance more than anything.

Same could be said for mountain bike forks. I prefer to spend the $20 in oil and swap it more. I do pull my lower dust seals out to clean and regrease atleast once between oil changes, though.

I'm going a bit extremist here, but for the mother of Jeebus I can't stand how sticky and reluctant to move Fox forks get after a couple of rides. Getting them to feel plush again takes to drop the lowers, clean and regrease. My experience with Manitou and Rock Shox has been better. And they don't even have those Ka-chink! bits in the stanchions.

On a side note: why do people have an issue spelling "stanchions" correctly? I've seen "stantions", "stanchiums", "stanctions" (special note here: are these in a GT Sanction's fork?), and ultimately "stations".

Are you applying slick honey to the dust wipers? It makes a world of difference. Both Rockshox and Fox are spec'ing SKF seals these days (or so I believe) so fox shouldn't be any worse - maybe you are thinking of older fox forks?

Yeah, I do always pack a generous amount of slick honey below the seals and at the bushing's recesses in the lowers. However, I still feel Fox's (on a 2014 fork, I haven't tried the new ones) "sliding performance" deteriorates quicker than RS's one.

Gotcha. I came from a 2014 factory series 34 to a 2015 pike, I did notice a slightly less sticky initiation on the pike but only very slight - barely noticeable really. Assuming you are on a factory series or a FIT damper fox fork, are you running the new 20wt gold oil? I noticed a large improvement using that in the fox 34 and I even prefer it in my Pike now as well.

Well, I'm in Argentina and the local distributor hasn't got the 20wt oil yet. Let's see if they can bring it down here any time soon.

Maybe you can find it on eBay or online retailer? If you can, do it. It's seriously an upgrade you will notice immediately. You just need to make sure it's a sealed cartridge damper (FIT cartridge) and you will need to use the new SKF seals, the older seals are not compatible with the 20wt.

I'll try to get a grip on that stuff. Thanks for all the information!

No worries, glad to help! The 2014 factory series 34 really is a pretty damn good fork (despite what people say) once you get it dialed in with the new oil and seals. I also added 15cc of float fluid on top of the air spring to reduce volume - since they dont have the bottomless tokens like the new Fox's and Pikes. Push industries sells a replacement air cap that has bottomless tokens like the pike, but its $80 vs paying $5 for some float fluid that does the job. I was really happy with mine and wouldn't have bothered switching to a Pike but I just got a crazy good deal I couldn't pass up on a slightly used one thanks to 26″ wheels losing popularity… My dialed Fox 34 felt more plush on small-medium bumps since it likes to sit a bit lower in its travel, but the Pike turned out to be MUCH more supportive sitting higher in the stroke over small bumps. Both are great options, but for my riding I prefer the Pike now.

Also I am sure every one would start moaning if there push bike fork weighed as much as a MX fork!

You have to service forks?