While there's been lots of rumors floating around about a potential full suspension bike from Whistler-based Chromag for years, the Minor Threat probably isn't what most of us were expecting. With two youth sizes, and builds that mirror their full-grown counterparts, Chromag themselves claim their bike is "burly enough for the park." Read on below for a full presser straight from the bear's mouth.

We design stuff that we want to use. That's how every Chromag product has come into existence, and as some of us are parents, the Minor Threat is no exception. 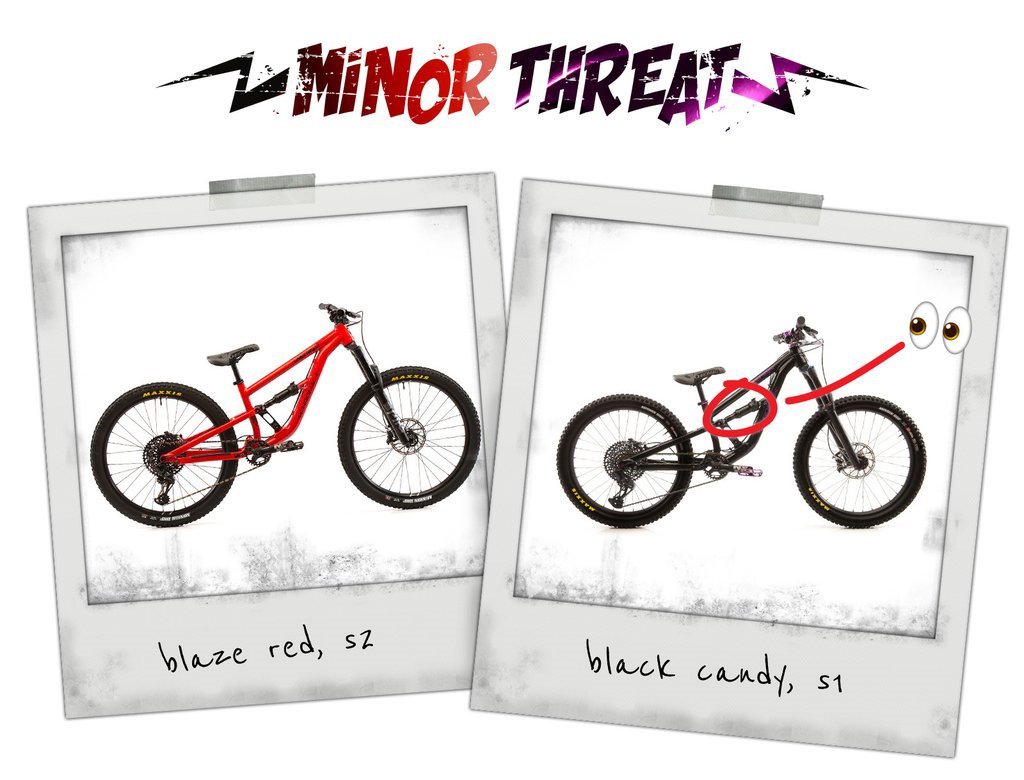 The keener eyes amongst you might have noticed this bike is a full suspension, also fondly referred to as a twin squisher or double boing-boing. You might also be surprised that our first foray into this domain was with a kids bike.

The truth is, even though this is a kids bike, it's a rather technical engineering exercise. Nonetheless, we have a whole host of talented people here at Chromag that were eager to push their skills into the full suspension dimension. 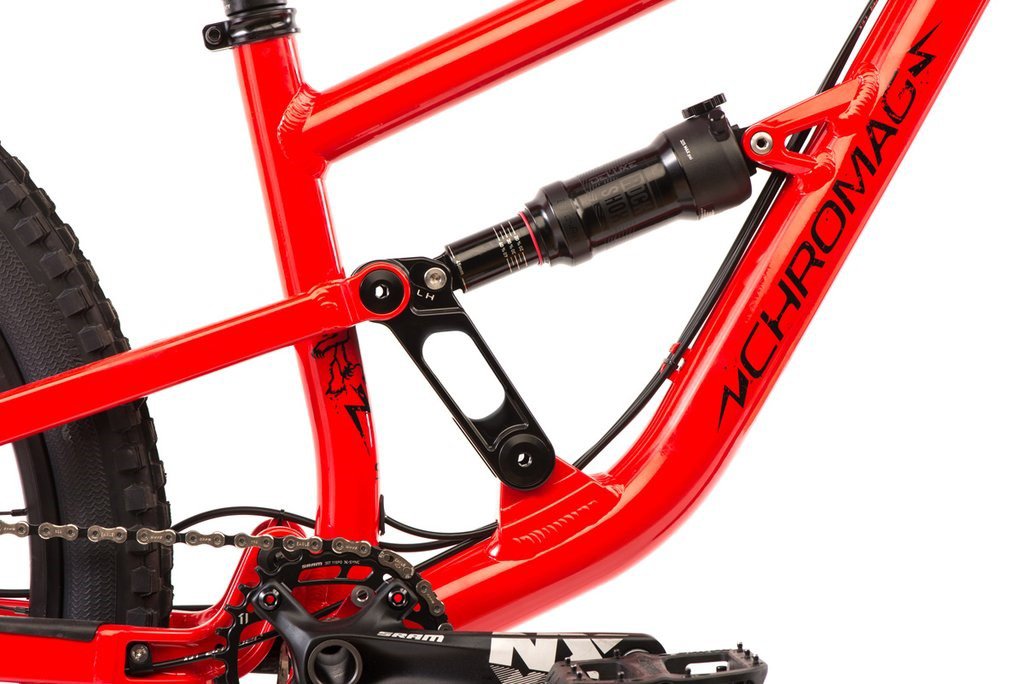 We were also just really excited to design a (frankly) f**kin' awesome kids bike, especially as almost all of us grew up riding klunkers that were nowhere near as good. I think my first "mountain" bike was a Raleigh Nexos, and even your most underbiked gravel rider would pass that up in this day and age. That didn't stop me shralping that thing through the local woods though, and chasing that feeling of freedom is what the Minor Threat is all about.

Kids are growing up with 12 speed clutch drive-trains and will never know the pain of running an over-engineered chain guide that is as good at keeping your chain off, as it is on. Don't get me wrong, this isn't a bad thing, think of what these kids will be capable of in 10 years time. Hell, look at what they're capable of now. I'm not too proud to say these groms might actually require better gear than we had back in the day. With that in mind, we set about designing it for them. 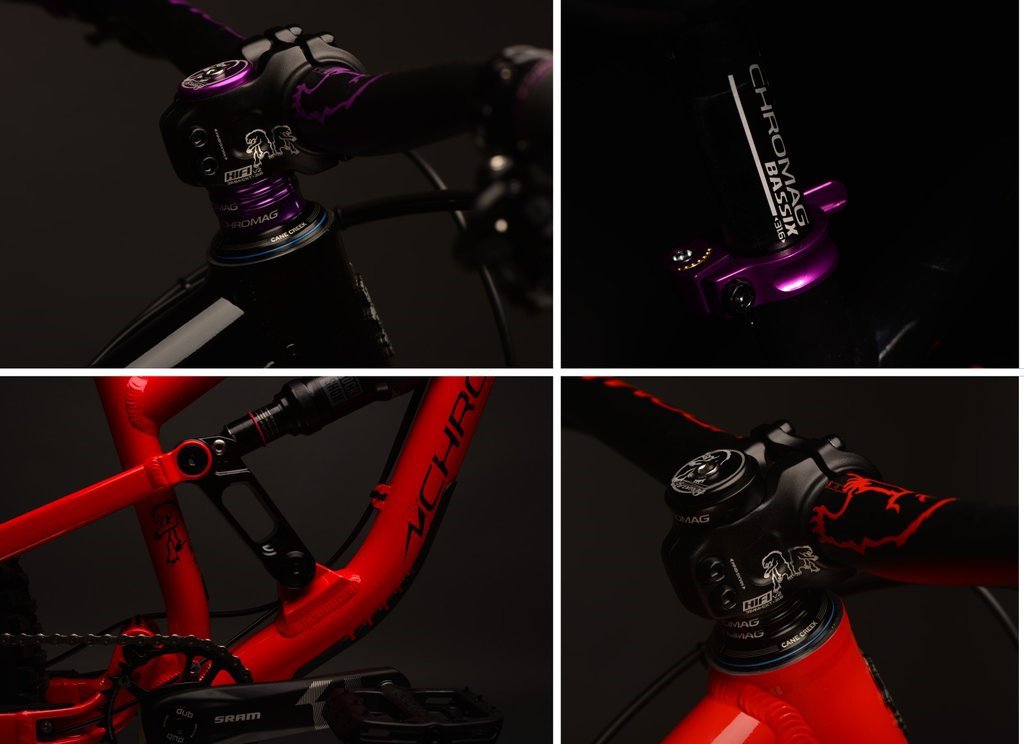 The Minor Threat has a 4-bar linkage driving 140mm of rear wheel travel tuned for the lighter rider. The S1 size sports 24" wheels and a 140mm Revelation up front. The S2 has 26" wheels and a 150mm Pike.

The progression of the Minor Threat is 18%, which is relatively low when compared to an adults bike. It was designed like this to ensure the entire range of travel can be utilised by a lighter rider. However the average leverage ratio is higher than that of an adults bike to help with suspension setup at low air pressures. The rear axle path is typical of that of a 4 bar linkage. It moves rearward in the first 50mm of travel and returns gradually up to its 140mm limit.

Time to put the kettle on, there's a bunch of graphs coming up...

Ok now you've skipped over those, let's talk geo. It has a 64° head tube angle and a 76° seat tube angle, which can be steepened by 1° with the installed flip chip, depending on what floats your boat. The S1 has a reach of 360mm and the S2 has 400mm, both of which can be increased by 10mm in the steep position. They both have ample room to install a dropper post, and come with QR seat clamps.

We're also rather proud of the build kit as it's no different to what you'd find on most of our own bikes. SRAM Eagle drivetrains, G2 brakes, Rockshox suspension and Maxxis Minion tyres are a few highlights, not to mention we've obviously decked it out in Chromag parts including the all new, kids specific Vanguard 720mm bar. The purple anodised hubs on the Black Candy option are another highlight, not even the adults can get hold of these. 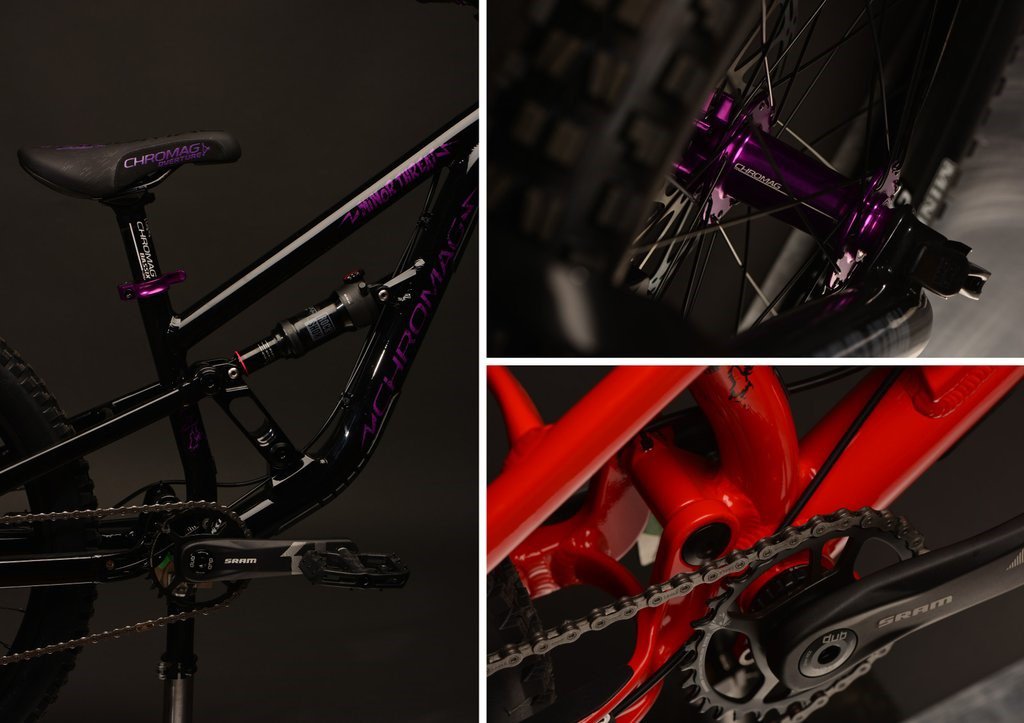 The frame is made from double butted 6066 aluminum tubing, with billet machined aluminum linkage plates and junctions.

Hang on, aluminum?? We know, steel forever right. Well... not quite. Material selection is a huge part of the design process. We make bikes from titanium, pedals from plastic and bars from 7000 series aluminum (We did actually play around with a steel bar/stem combo at one point). For this bike, aluminum made the most sense for a number of reasons, which we'll go into below this lovely photo of a CNC spindle covered in milk. 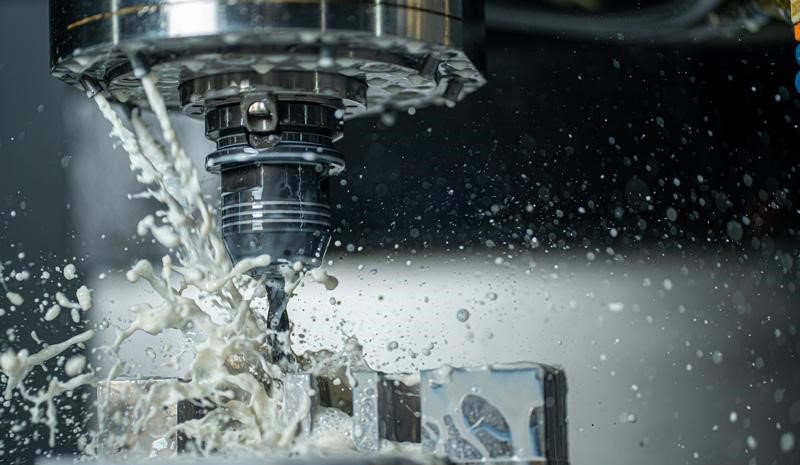 Firstly, the use of aluminum allows us to make a bike that’s burly enough to hold up to the bike park without being too heavy for a lighter rider to manage. Aluminum has a lower strength-to-weight ratio than steel, meaning that more volume of aluminum is required to make a frame that holds up to our strength standards. This is why you’ll notice that the tubing used in the construction of the Minor Threat is thicker than that used on our steel frames.

A big one, especially for a kids bike, is that aluminum is pretty low-maintenance. As you probably know all too well if you own one of our steel frames, it’s very important to grease your seatpost every couple of months (reminder: go and do that now!). If water gets into an ungreased steel seat tube, it will corrode the steel and form a bond with the aluminum of your seatpost, making it nearly impossible to remove. However, this isn’t an issue with an aluminum bike. While unpainted steel is not naturally corrosion-resistant, aluminum is. Long story short, it’s a little more forgiving to being “ridden hard and put away wet”.

Just like the rest of our Taiwanese-made frames like the Rootdown, Stylus, and Monk, the Minor Threat is handmade by a team of highly skilled framebuilders in Taiwan, and is held to the same stringent quality control standards that we're known for. 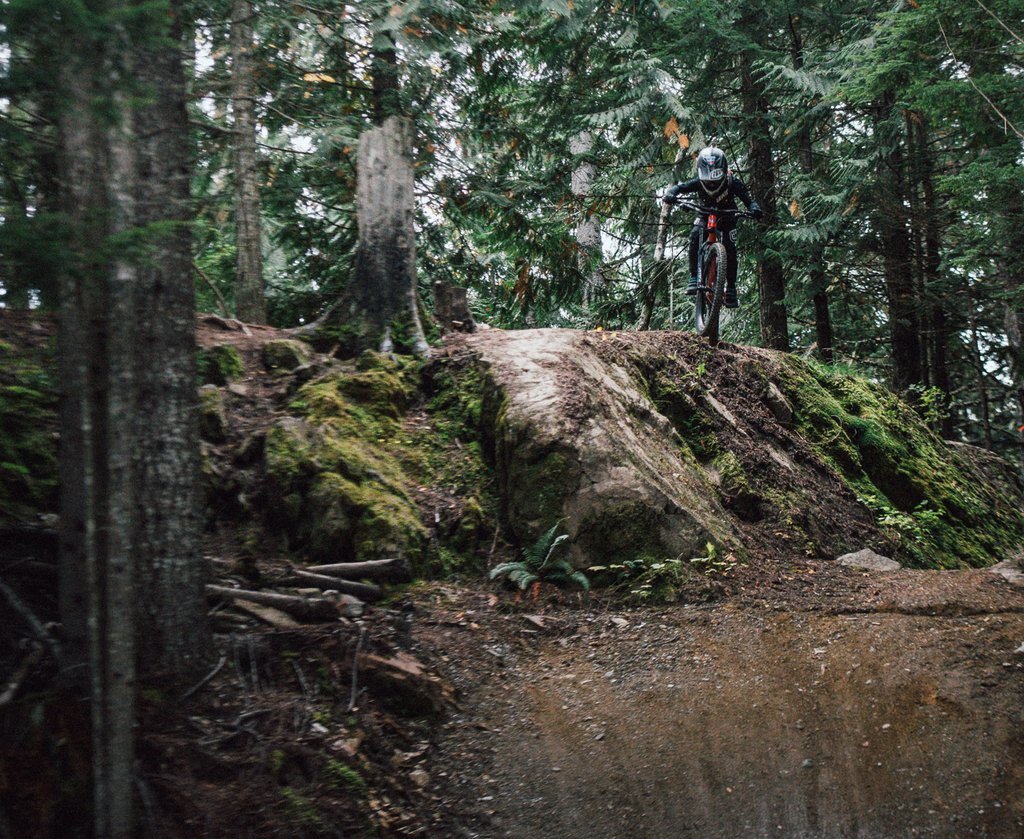 S1 and S2, why two sizes? Why not just allow for a wheel swap? In reality you can run both 24" and 26" wheels on both frame sizes, we just don't recommend it. Increasing the wheel size, doesn't increase the size of the bike, it just lifts it farther from the ground. It does nothing to affect geometry like rear center, reach & wheelbase, or account for head tube and seat tube angles. Just like we do with our adult bikes, we dove deep into the sizing of the Minor Threat, and rather than slap a band aid on it, we decided to do it the proper way and create our S1 and S2 sizes.

Like all of our products, we want you to be able to service them as much as possible and keep them in fine fettle. We treated the Minor Threat in the same way, with full disclosure on technical drawings and a wide range of service kits available so these bikes last a long time, even if your wee nipper does eventually out grow it. 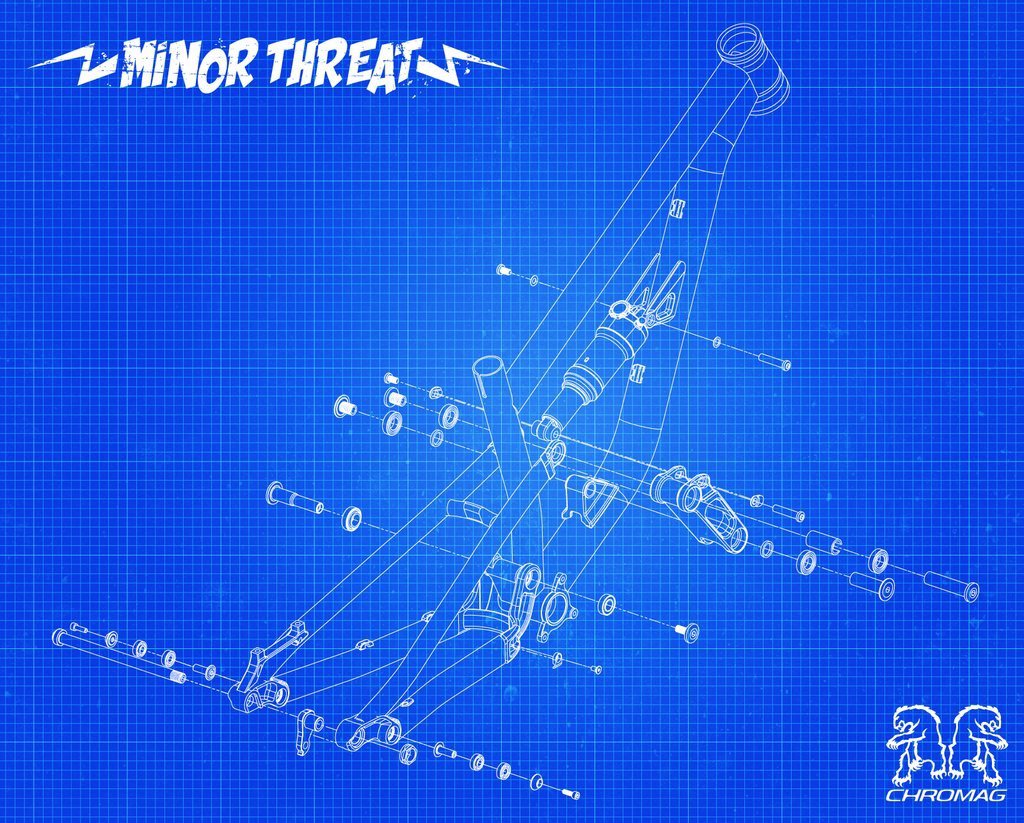 As you can see, no small amount of thought and effort has gone into designing the Minor Threat. We're really excited about being a part of the next generation of rippers and helping the youngsters get off to as good a start as they possibly can.

Retail for the Minor Threat is $3,950 CAD, and there you have it, a Chromag full suspension bike. As a kids bike, perhaps it's not quite what you were expecting, but we'll leave you with this: if you see one mouse in the kitchen, there's a good chance more mice are close-at-hand...

this HAS to be a reference to the band...

Off topic, but how has the addition of the Surface Voyager flown under the radar over here?  @Andrew Major??  Looks sweet.

That one whooshed over all of our heads! It sure does look sweet (as does the Rootdown Ti).

I´m currently working on getting my hands on a Rootdown Ti.   Makes perfect sense since I already own a Stylus, right? Right!?

The big one is almost my size. Almost.

Looks awesome!!  But are there at least bottle cage bosses under the downtube?  My kids need space for water bottles...

Hey IslandLife. I just heard from Chromag and there are no bottle bosses on the Minor Threat frames. There wasn't room in the front triangle and they didn't feel placing a bottle under the downtube would be secure.

Love it looks great! Any info on the prices in euro? How do they compare to the early rider hellion x, and the propain Yuma?

Hi Reini, probably best to contact Chromag directly about euro pricing/availability. It's hard for us to comment on how they compare to the two models you listed - we haven't had one in to test, and if we do, it'll obviously be a young rider ;)

thanks for the reply, I'll follow up with them directly. I understand - both models are a bit more Euro focused.

“Aluminum has a lower strength-to-weight ratio than steel, meaning that more volume of aluminum is required to make a frame that holds up to our strength standards. This is why you’ll notice that the tubing used”

Can someone explain this a bit further? I thought aluminum tubing has thinner walls and larger diameter compared to steel to achieve needed strength for a frame. And it appears this generally results in lighter aluminum frames than steel. I am speaking in generalities because i must be misunderstanding something somewhere.  The jump from “strength to weight” to “more volume of aluminum” has me a bit confused.

And the bike looks awesome, cant wait to get a matching set of full suspension chromags for me and my (currently 2 year old) son in a few years.

I wish I had commited to a 26" version of this, anyone know if there are any out there for sale? Chromag says maybe some in shops, otherwise next year spring.