Microadventure on the Emerald Isle

Flipping through magazines or perusing the internet, one gets the impression that all the grandest adventures happen on far flung parts of the globe. Bikepacking + rafting in Mongolia, epic descents in Chile, and exploring Siberia on two wheels is all well and good, but sometimes the best adventures lay right out the front door. Enter: the microadventure.

Microadventure: An adventure close to home; cheap, simple, short, and yet very effective.

This story begins at my house, in a small village in the west of Ireland where bank holiday weekend biking plans are being made. My usual plan involves packing a van, a motorway dash, service station food and a late night drive home. Our rule of thumb states that the time spent on the bike should be at least twice as along as the journey. So a two hour drive should equate to a four hour bike ride. A big day out on the bike might involve hitting the road the night before to conform to this rule. 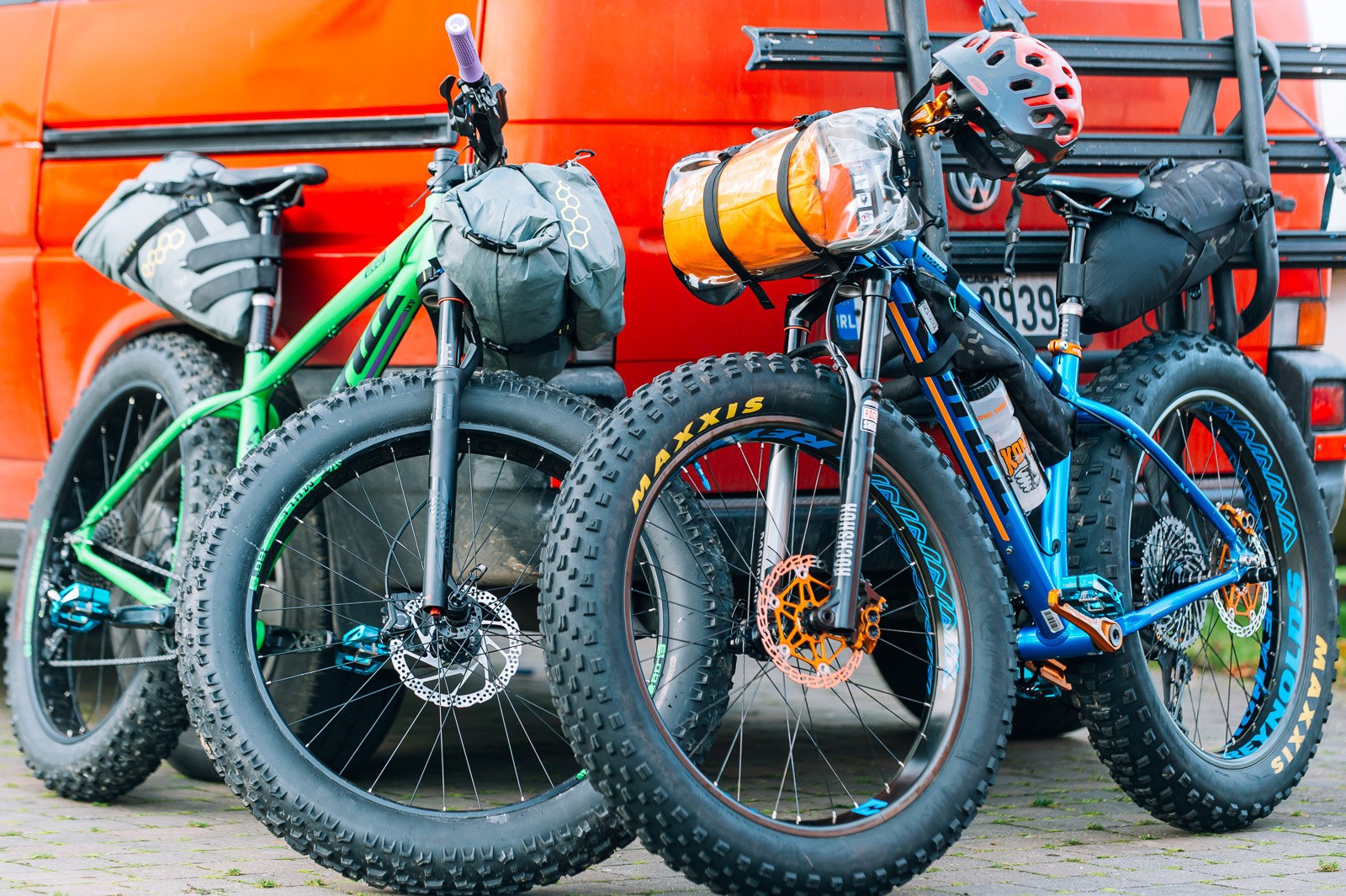 Lately, however, I’m on a newfound quest to make my biking life more adventurous by taking inspiration from the British explorer Alastair Humphreys and his idea of a microadventure. A microadventure, in Humphreys’ world, is an adventure that is short, simple, local, and cheap. By this reckoning, my usual weekend biking routine fails to measure up. It lacks adventure. It isn’t local. And it seldom works out cheap.

So working from this premise I started with three basic principles. Firstly there should be no cars involved. Secondly there needs to be camping involved. Thirdly, and possibly most importantly, the mountain biking has to be worth the effort. 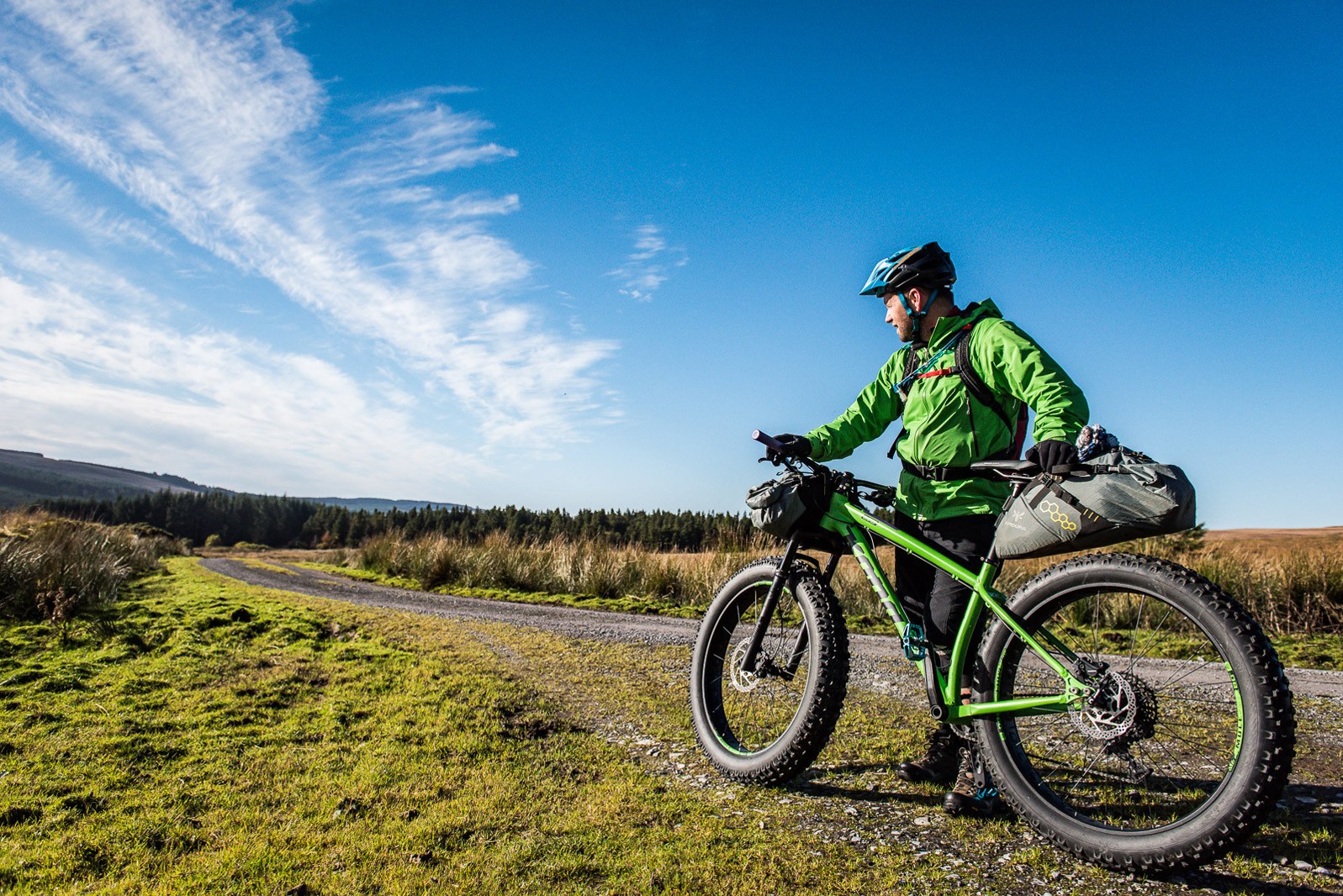 This quest for adventure had been sparked a couple of years ago by my purchase of my first fat bike, a Kona Wo. Living in the west of Ireland official bike trails are very limited yet the Atlantic coastline – more recently christened The Wild Atlantic Way – is a landscape calling out to be explored. My fat bike opened up trails and areas previously ignored because of the type of bike I normally rode. No matter where you end up the fat bike will allow you to have fun and link sections of interest together.

I had just taken delivery of my new fat bike… a Kona Wozo. This is a fat bike with trail ambitions, an evolution of the Kona Wo that started me on this journey and a bike that just might be a match for my now-neglected full suspension bike on more challenging terrain. This adventure had to involve some good trails to have a blast on and see how a fat bike would ride the more technical and fast trails.

A plan started to unfold. 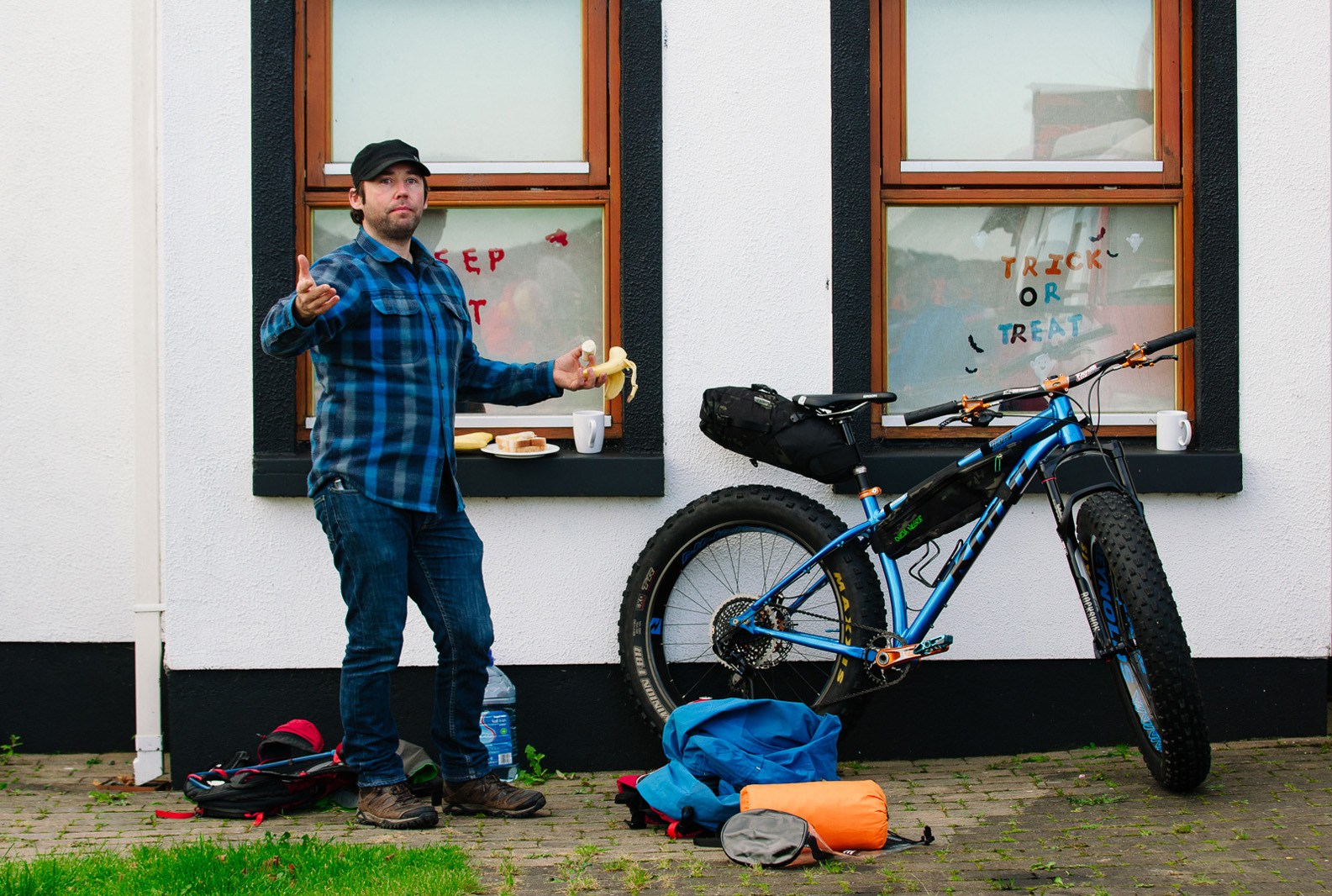 Deciding that this trip deserved company, I pitched the idea to Garry, my biking buddy and local bike shop owner who had input to the design of the Kona Wozo. I plotted a route, linking various roads and bits of trail I had ridden over the years.

So the day came and myself and Garry headed off out my driveway to embark on this bikepacking microadventure. Bikes were loaded with gear and we were giddy with the thought of the 24 hours ahead.

On the road, we quickly settled into the natural rhythm of pedaling and banter. Ten minutes out from the house and the frantic life at home was quickly slipping away. As we came through Kilchreest, a small one-pub village (that’s how we measure the size of a village in Ireland) we passed the window of a small rural shop. I had passed this little shop numerous times in the van on the way to a local gravel grind and had always wanted to call in. 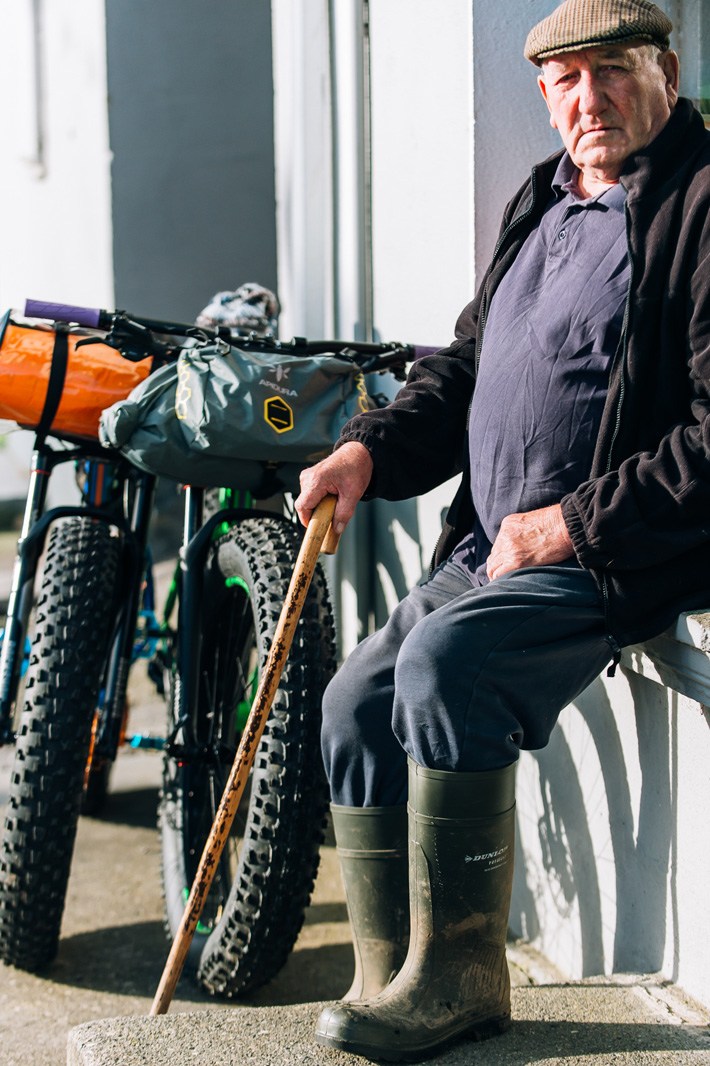 The shopkeeper and a local farmer were inside chatting. It was a small room with basic wooden shelves stocked with everything from blue rope to beef nuts to porter cake and bread. A definite slice of nostalgia. A bit of chat and the inevitable checking of family lineage until ‘sure I knew your father well’ said the farmer, declaring his sadness when I mentioned my father’s passing two years previous and his sincere apologies that he hadn’t heard sooner.

On a bike the pace of life changes and stopping at a small shop and taking time to talk to local people, though strangers, seems perfectly normal. A simple pleasure that now passes us by in the blur of a car window. 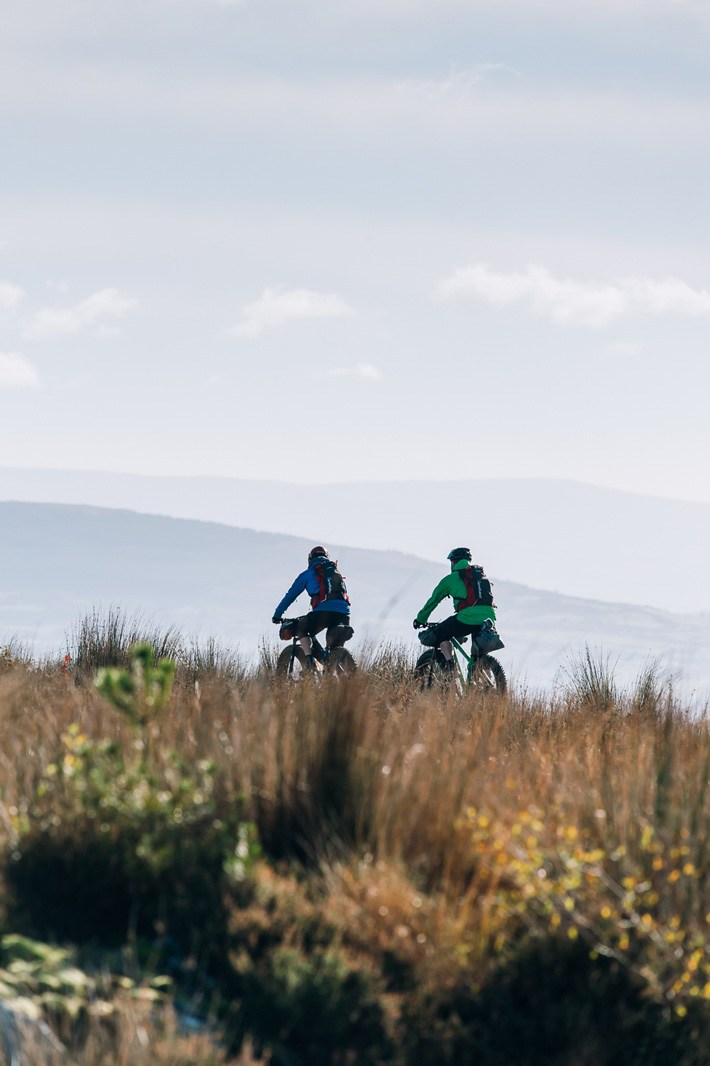 The route sees us cross the Slieve Aughtys, an upland in the south of Galway County. It’s an area off the beaten path and sees few tourists or visitors. The route is a mix of small country roads, gravel trails and singletrack.

We were aiming for the small lakeside village of Mountshannon (this one a three-pub village making it a ‘good size’ of a place). We needed to start covering ground and put a push on. Little gems of trail are unearthed along the way by way of small sections of sweet forest trail or classic gravel descents. It’s a magical time, a landscape of golden yellows, burnt oranges and amber browns. There is nothing subtle about this landscape. It’s a feast for the eyes.

Arriving in Mountshannon I thought it would be rude not to reward ourselves with a quick pint. This is where things quickly deviated from the plan. It was small country pub. No TV, open turf fire and one of the aforementioned little grocery shops attached. Seven locals sitting at the bar. The sight of two fully loaded fat bikes being wheeled into the pub immediately spun the locals around on their bar stools. 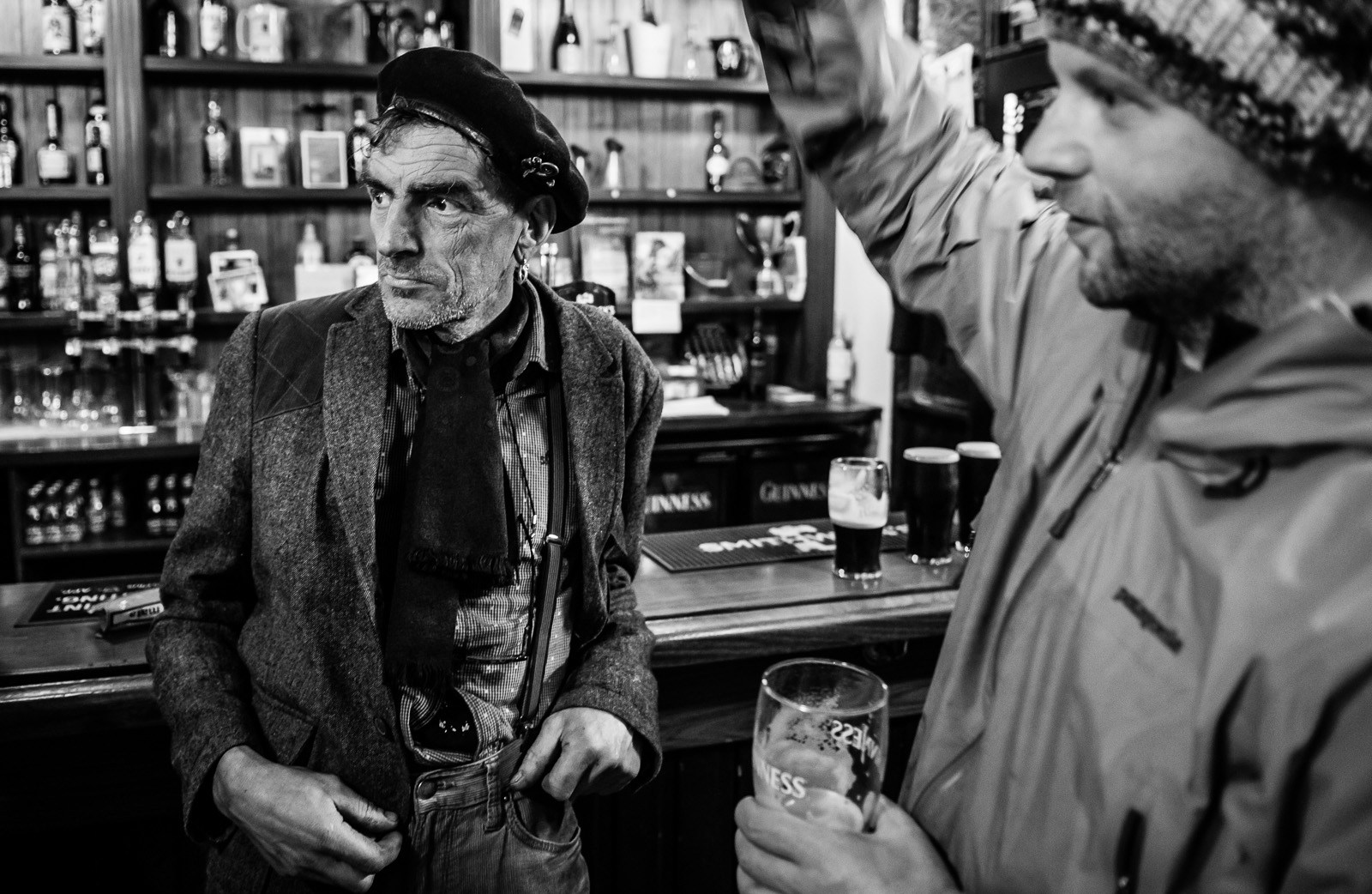 Garry was assured the bikes were fine in the pub and would be watched as we had our dinner across the road. Upon our return to the pub Garry was in shock. The bikes were gone. In their place were two old high nelly bikes fully loaded with our gear. The bar erupted in laughter. The locals had switched them and had been awaiting our return.

The next few hours were spent chatting, explaining the weird bikes and laughing with an incredibly welcoming and open group of people. A few more pints, and a whiskey or two and it was time to go get some sleep.

A little fire and a huge starry night sent us off to bed. The pints always help with sleeping and I was almost instantly asleep. However as I have discovered previously I was almost as quickly in need of the toilet. 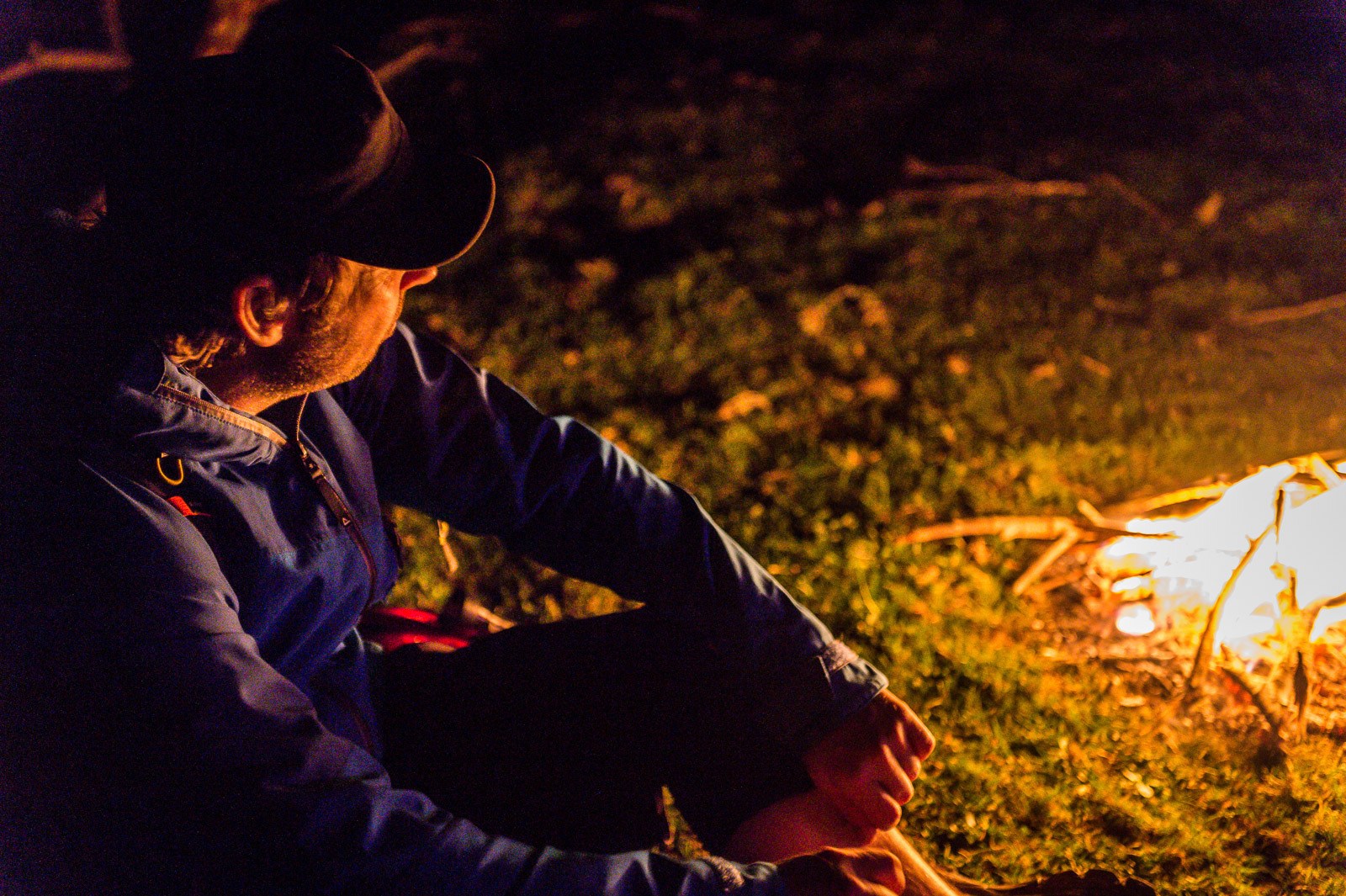 The morning came. I was feeling sore from the previous day’s ride and fuzzy headed from the socializing but it was a fine dry morning so stoves were lit and coffee was quickly brewed. That was about all that happened quickly but eventually we hit the road. 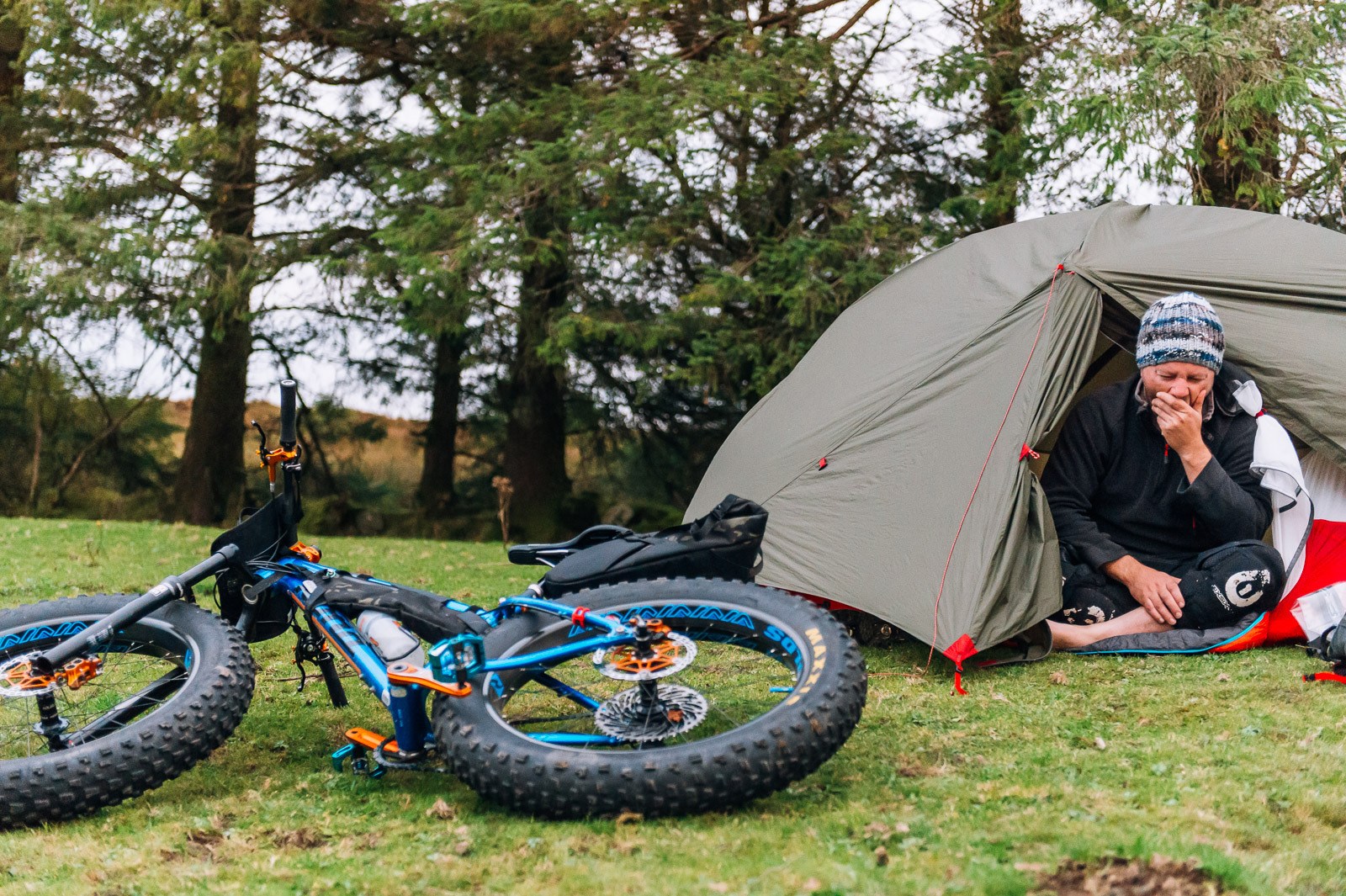 We spent the morning grinding out the distance on tarmac to get to the trails but these quiet country roads are a pleasure to ride. There is always something over a wall or around a bend to catch the eye and not much by way of traffic to intrude. 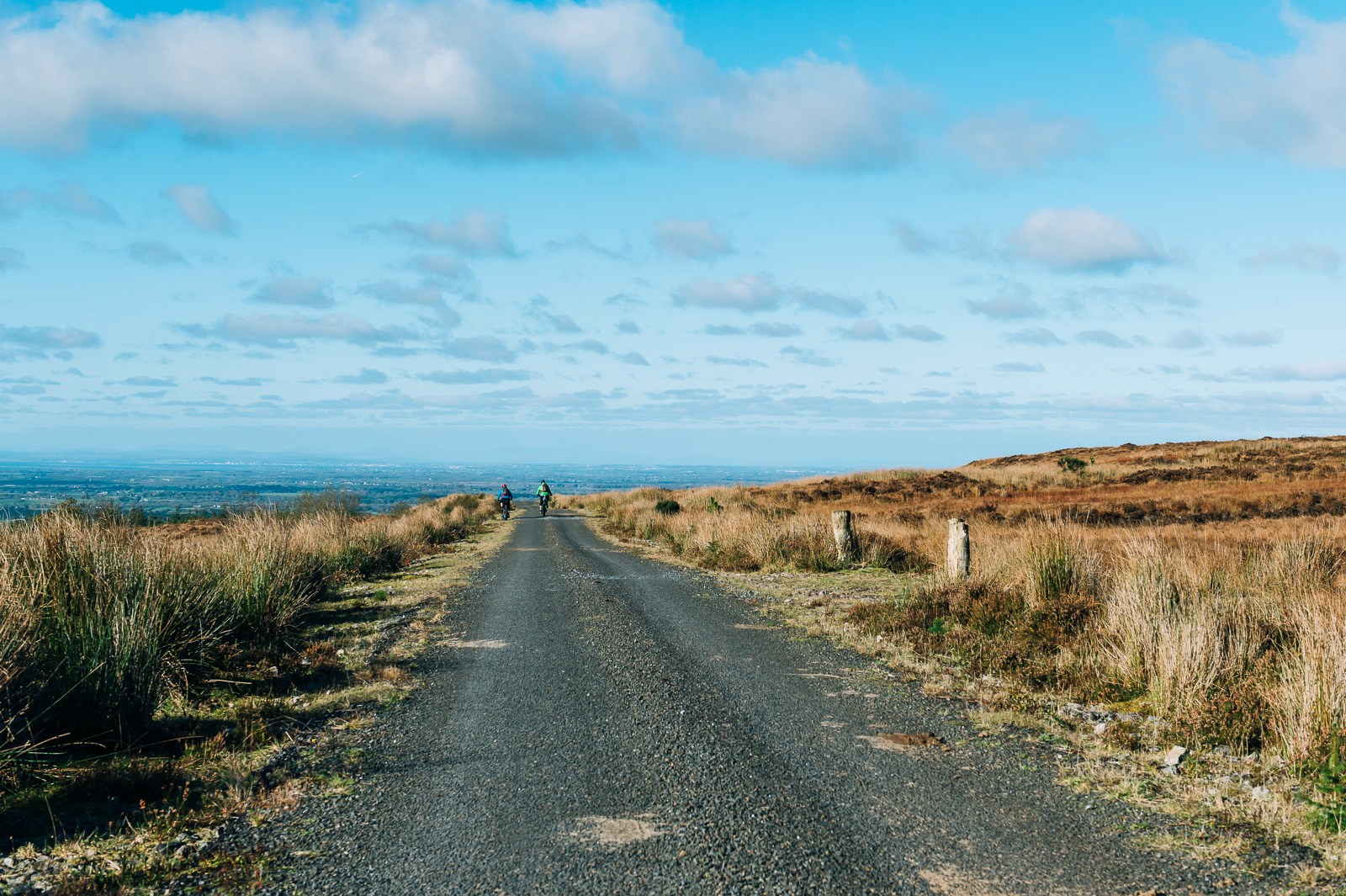 We stashed away the bags and dropped our seats. The trails here are steep and fast and just what I was looking for to test the new bike. The Wozo really is a trail bike and the big wheels give the confidence needed to stay off the brakes. You know (or hope) they will eventually grab something and keep you pinned to the ground. 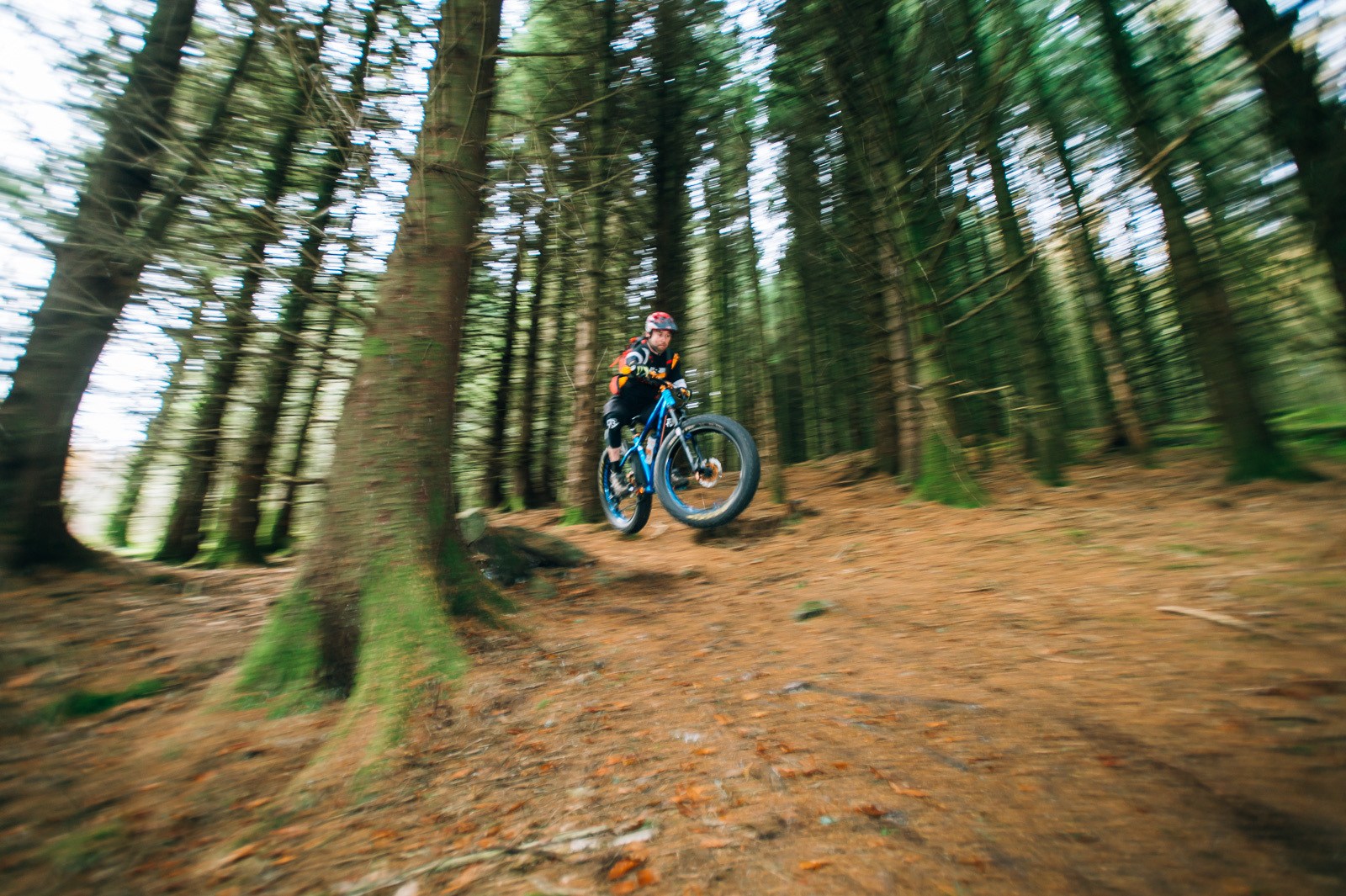 Between trail sections, Garry explained the details of the bike that he helped design with Kona that give it trail credentials. Super short chainstays, long reach, aggressive geometry. Stuff I always read about in magazines but never really pay attention to. 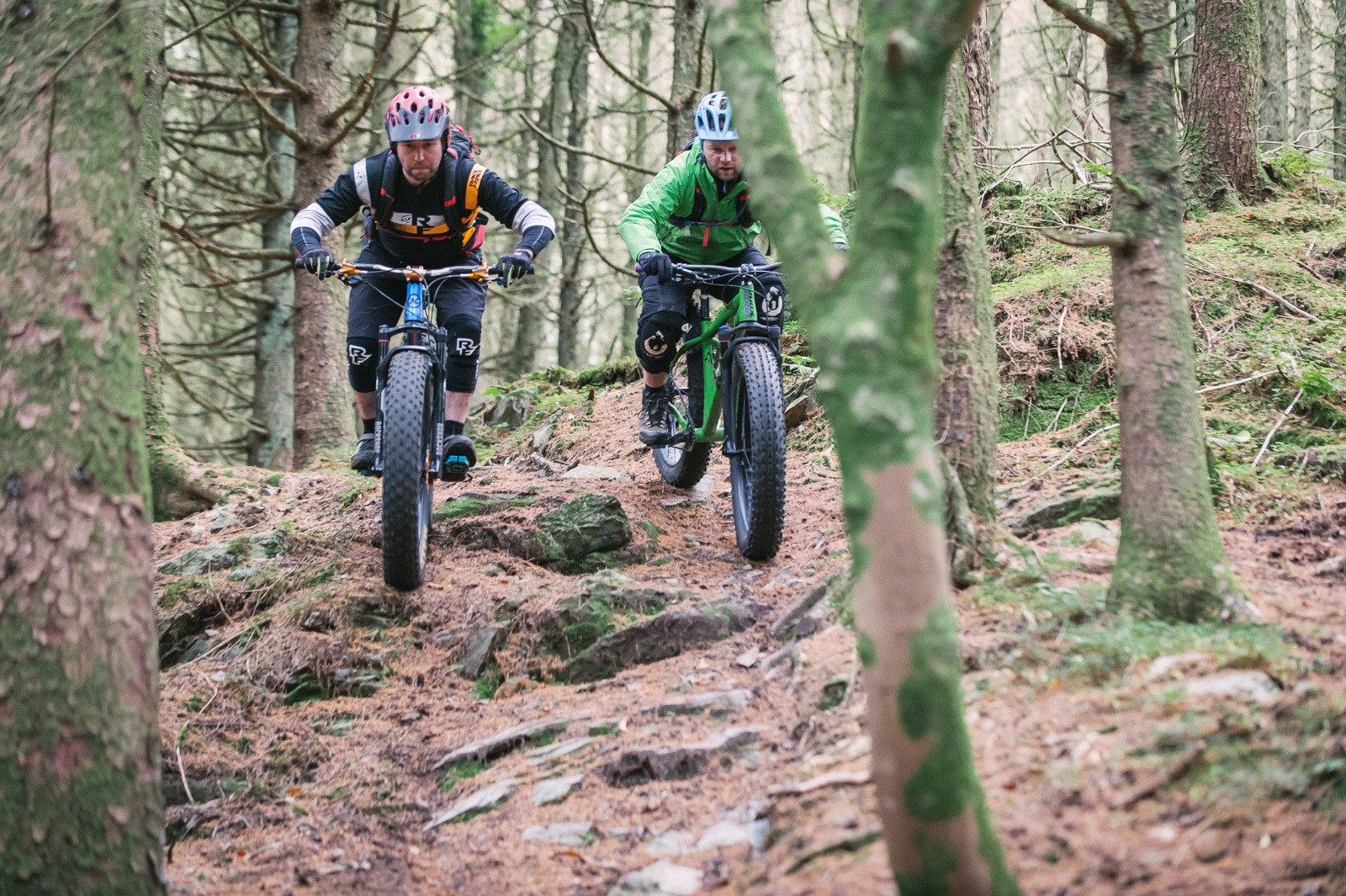 We had a great day riding super trails which are a real credit to the local trail builders. The day finished as we sat on a bench high up on the hill overlooking Lough Derg and the hills we crossed to get here.

We managed to leave from the front door of my house on bikes and have two days of adventure, with the feeling of so much more accomplished than if we’d sat back and done our usual motorway trip. The idea of a microadventure, something small yet achievable by anybody, changes the way you can approach your regular spins. Adventure biking doesn’t have to be far away in some exotic corner of the world. It can be found just outside your front door. 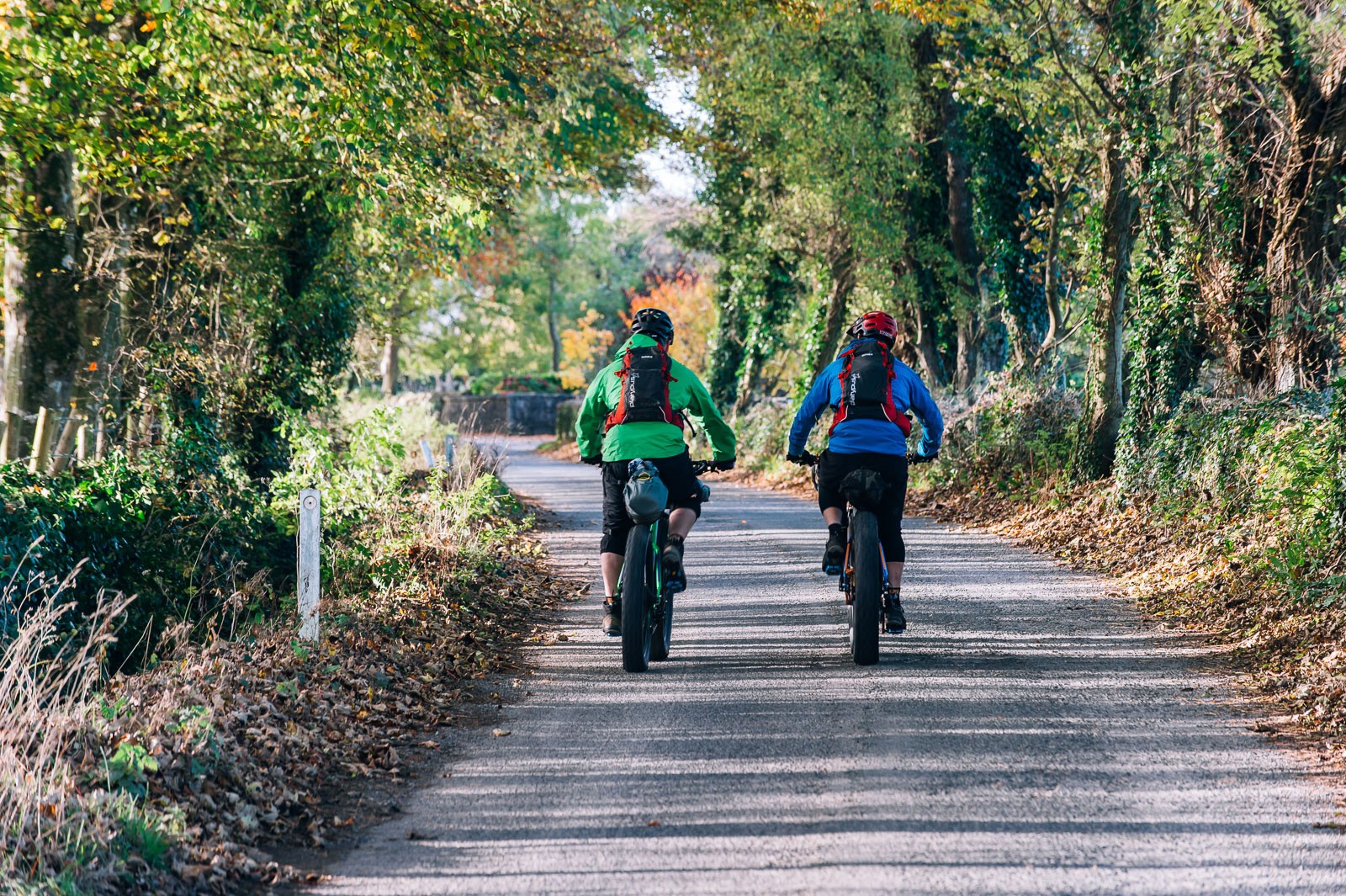 What undiscovered things lie out your front door?