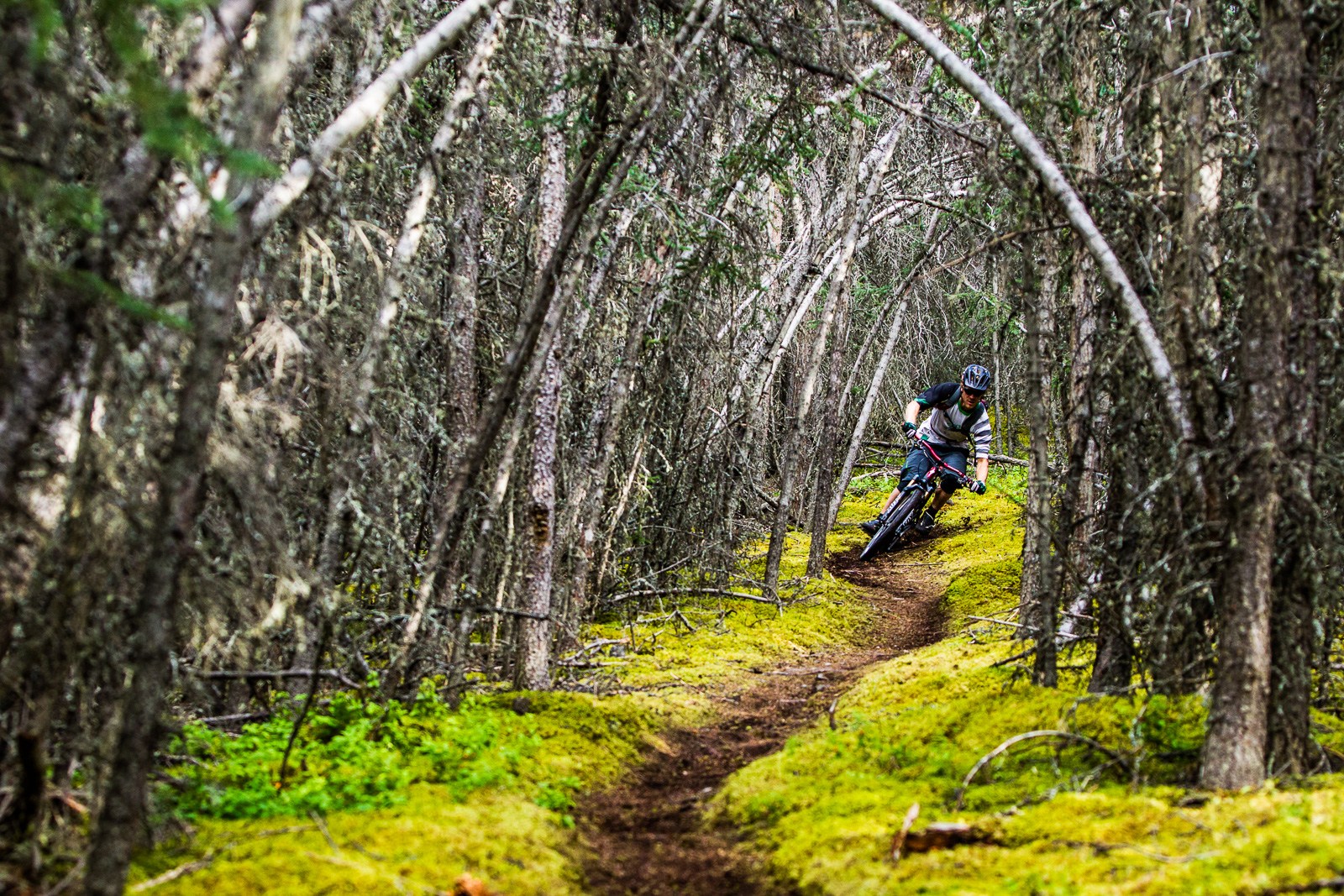 MEC has been pouring money into outdoor sports across Canada for years – and that includes mountain biking. This emerald gem is in Carcross, Yukon. That’s all I’ll say – but if you go there (and you should) you’ll find it. Photo: Dan Barham

MEC Dirt Search is a Canada-wide call-out for applications for trail funding. First run in 2014, Dirt Search awards $10,000 each to one group in the East and one in the West. The winners are chosen based on number of votes received, so the money goes where the people decide it should go. And by voting, we mean you can do it. Online and daily. Yeah, you. The finalists for 2016 have been chosen. So go and vote. Right now. Then do it again tomorrow. Voting closes March 30th.

Below the break are some details on the winning entries from 2014. We were pleased to see that the Western winner was from Carcross, in the Yukon. We went up there to ride in 2010 (damn, we’re due for a return) and Whitehorse and Carcross have a lot to offer. If you’re the type to get excited about daylight savings then you’re gonna love the feeling of riding after midnight or sunsets that last for hours. 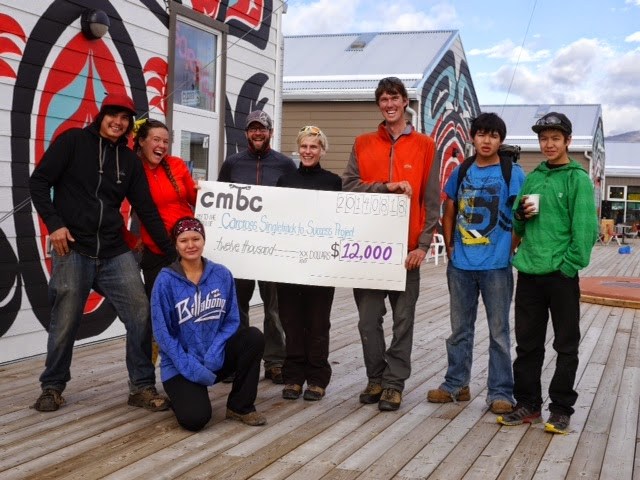 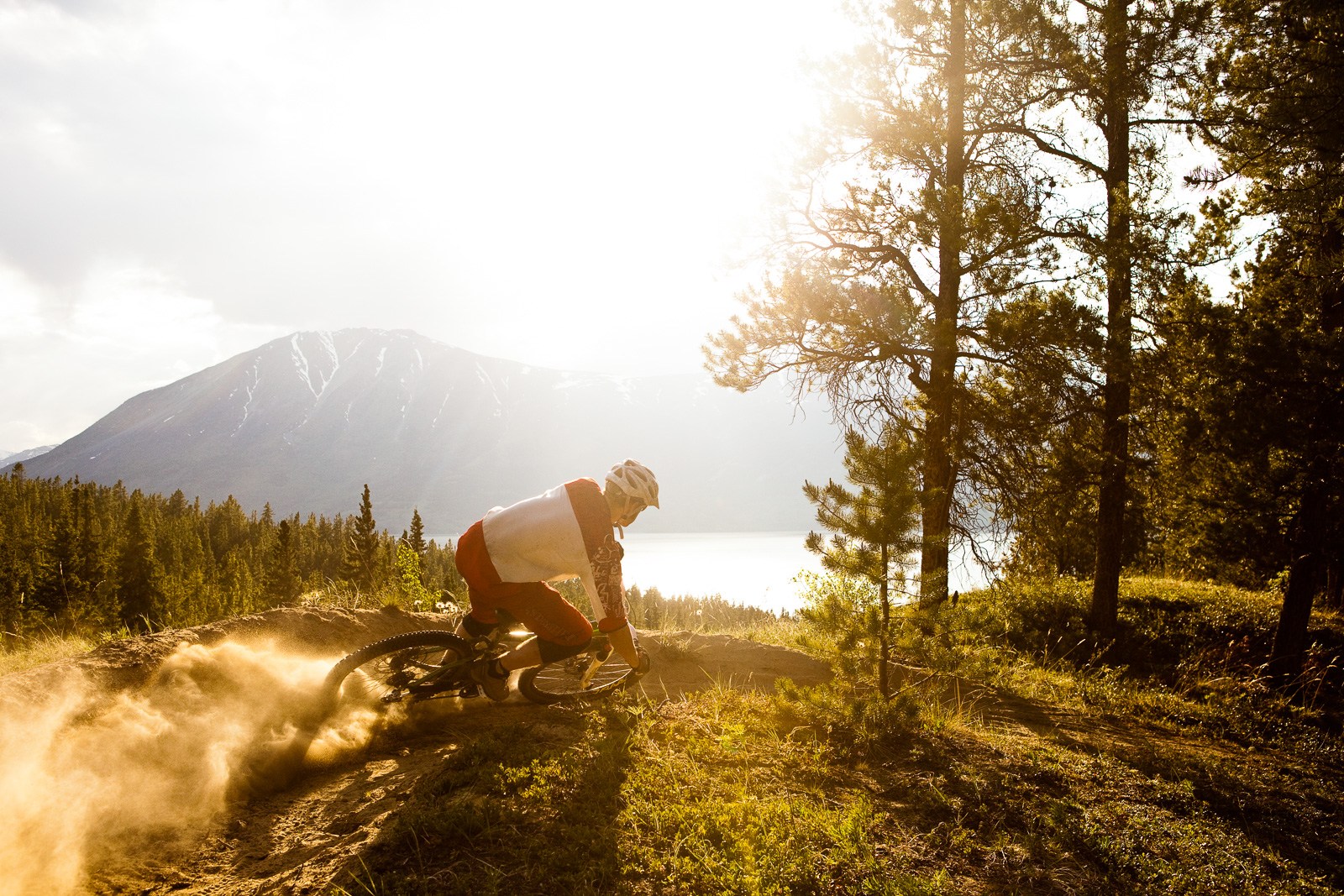 Sam Reimer kicks up a cloud of dust while cornering his mountain bike in Carcross, Yukon, Canada. Photo: Dan Barham

In terms of the specific trail work that was completed in Carcross with the $10,000 our club received, the Contagious Mountain Bike Club participated in some of the trail work, but the majority of it was carried out by the Singletrack to Success project. Here’s what happened with MEC’s awesome support:

The S2S Crew was able to build about 3.5 kms of beginner to intermediate level singletrack through one of the most rugged portions of Montana Mountain and lay the groundwork for a 0.8 kilometer flow trail that was completed in 2015. The main trail was named “Dei Kwaan” – Tlingit for “The People’s Trail” – in recognition of the incredible generosity shown by both MEC and Contagious Mountain Bike Club in supporting our program and the youth of Carcross. The sponsorship of the program created and strengthened connections between the S2S Crew and Whitehorse mountain bikers. Both trails have had a significant positive impact on visitation to Montana Mountain – now it’s common to see a more diverse mix of families, youth, newbies, AND the hardcores we’ve long attracted, all smiling and loving our beautiful trail network and community. 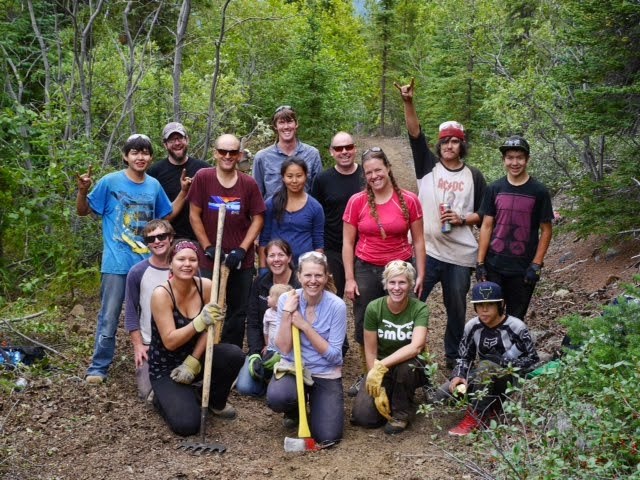 Singletrack to Success and the Contagious Mountain Bike Club have teamed up to make some MTB Magic in Carcross. Photo: Derek Crowe 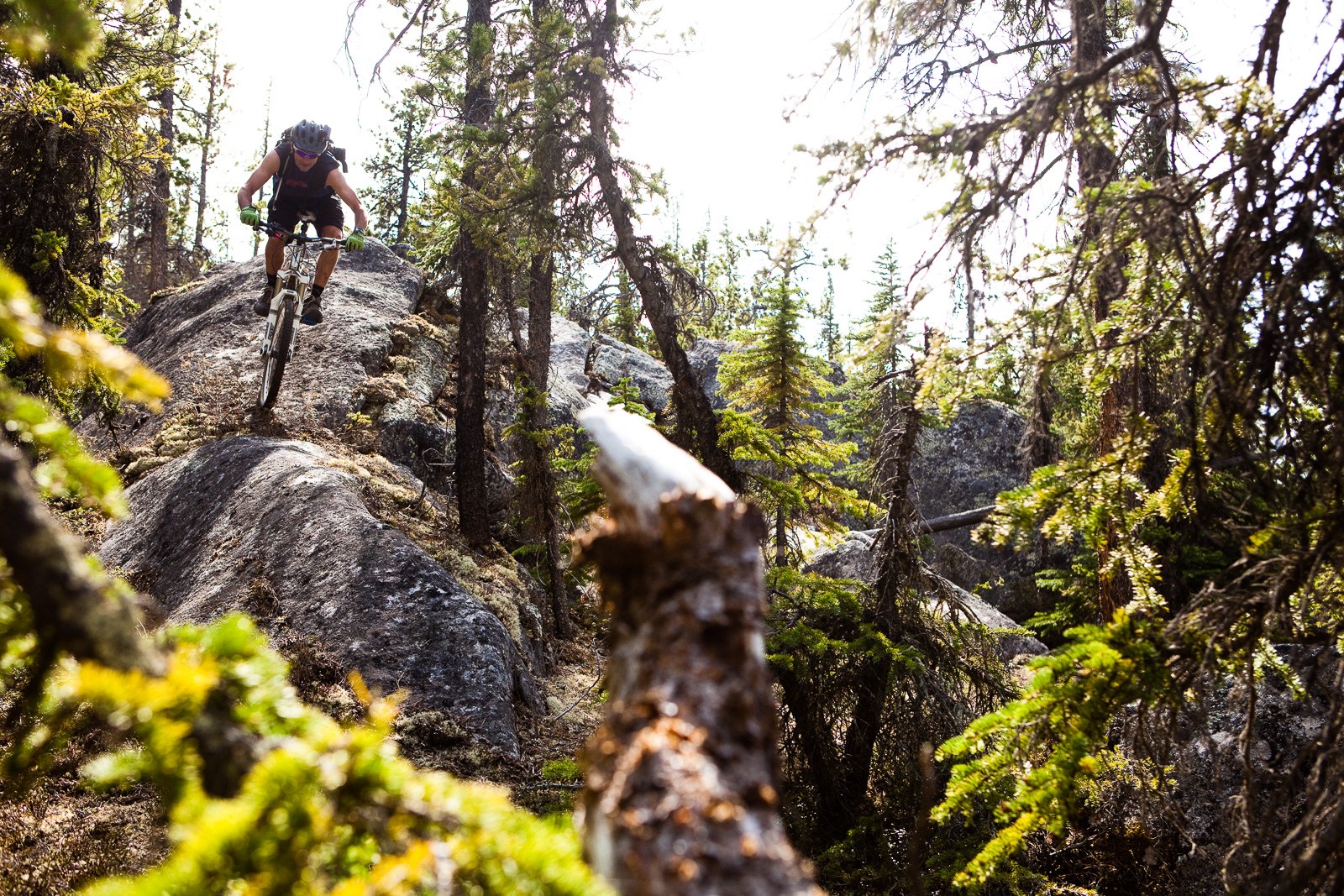 Cam McRae, Carcross, Yukon. Are you getting a sense for the variety of terrain up there? Photo: Dan Barham 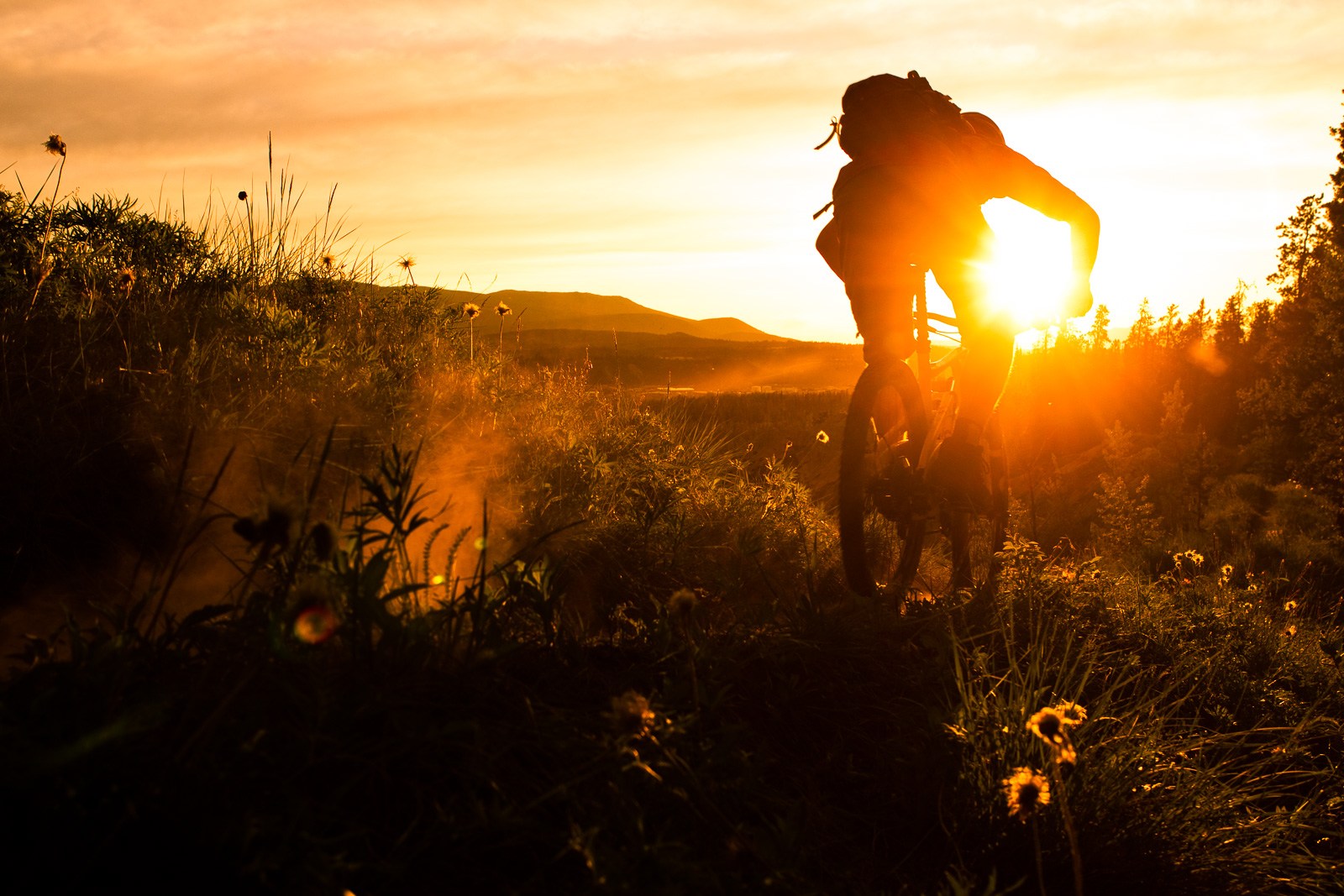 You get triple value for Golden Hour in the summer thanks to the Yukon’s Northern situation. Photographers dig it. So do the riders. Sylvain Turcotte showing off his home trails. Photo: Dan Barham

Based in Ontario’s Niagara Region, the Shorthills Cycling club started in 2006 with the goal of bringing mountain bikers together and creating a collective voice in the region.  The club grew rapidly with help from IMBA, formed a partnership with Shorthills Provincial Park. Over the past 10 years the club has been slowly giving the Provincial Park trails some much needed attention. The club’s group of volunteers have spent thousands of hours updating many of these trails into something far more sustainable.

In 2014, Shorthills Cycling Club was a lucky winner of MEC’s Dirt Search contest. The funds helped to purchase a Muck Truck: basically a mechanical 4-wheeled barrow. This helps move large rocks or loads of dirt and will make trail work easier and quicker.

Left to Right: Bridges in the Niagara region have a different look than what we’re used to here on the Shore. Fat Biking (‘cuz it’s winter). And that…is a Muck Truck.

Since Dirt Search the club has completed two stand-out projects: the first was dealing with a very long section of trail which was prone to being wet and muddy. Over 180 volunteer hours went into building more than 80 feet of bridges and another 20 or so feet of rock armoring. This required moving plenty of material around and the Muck Truck was in constant use. More recently, Niagara has seen the development of another official legal trail for mountain bikers. In South Niagara, the East Side Trail is slowly becoming a multi-use trail network.

The Shorthills Cycling club was invited to help design, develop and care for a new mountain bike specific trail. Once again the Club’s volunteers jumped into action and are currently making this a reality. A rough trail has been completed and signed.  Meanwhile trail work days continue to fine tune the trail itself which more precise bench cutting. Once completed, this trail will follow a ridge along the Welland Canal for quite a scenic ride.

We haven’t ridden in Niagara, but we can vouch for the Yukon. And who doesn’t want a Muck Truck?